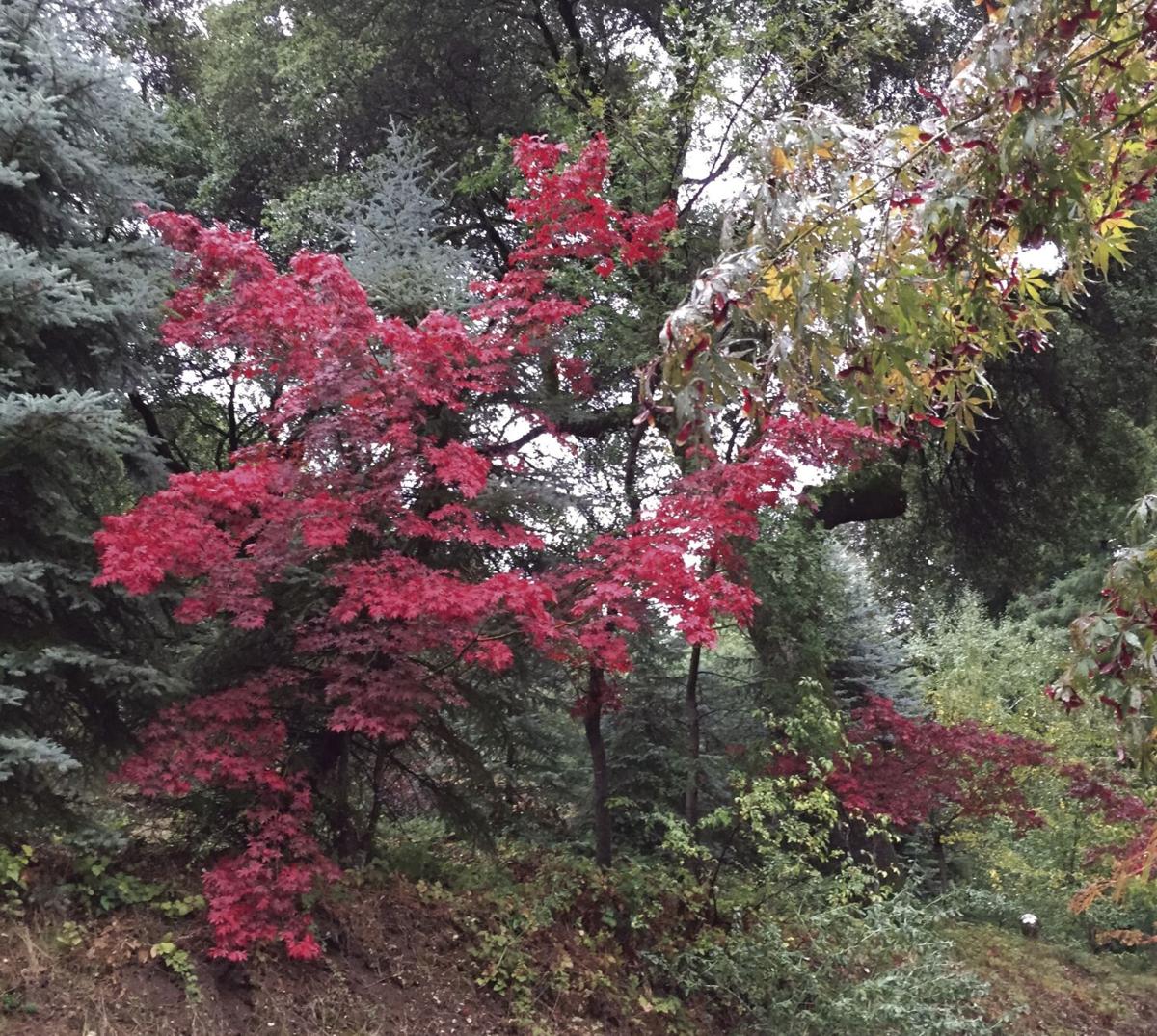 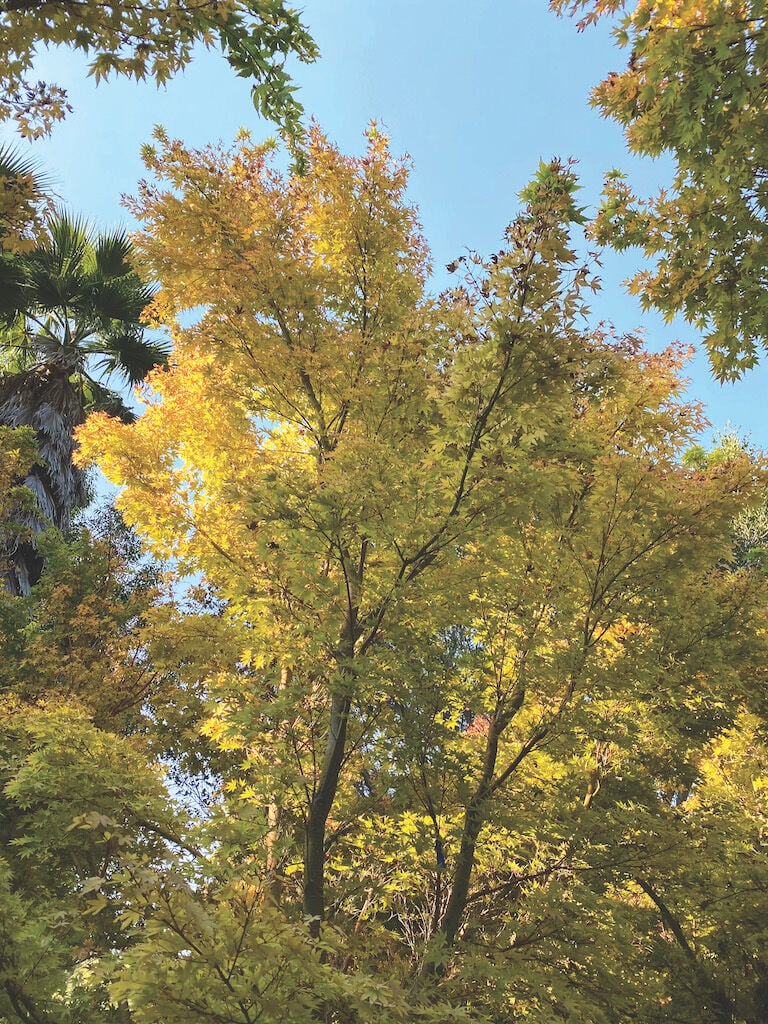 I used to have several very large Japanese Maples in containers. Starting from small specimens they grew over 15 years into beautiful trees. Each fall I would look forward to how each would color up and every year was different depending on the weather. Unfortunately, they did not survive the fire that burned my home in Bonny Doon. Unlike redwoods, Madone and Douglas fir, they are non-sprouting species. I’ll be getting some new trees soon to plant in containers but for now, I look to other trees for that neon fall foliage.

Many of you were evacuated during the summer and your garden did not get watered. Others have limited water available even now. So if your Japanese maple has suffered from hot weather, smoke and just plain tough conditions have heart. Your maple will come back next year as good as ever.

Other things to consider regarding fall coloring is that it can be disrupted by wind and rain coming at the wrong time. Japanese maples have a more delicate leaf than some of the other trees and are more susceptible to the elements of nature at this time. Rain and wind during the display will put a quick end to the autumnal display.

At a local wholesale nursery recently, I walked through their 36-inch box Japanese maple specimens getting ideas for future projects. Several that caught my eye included the variegated ‘Butterfly’ and ‘Oshio Beni’ with its orange and crimson fall coloring. Other notable maples that display vibrant fall coloring included ‘Seiryu,’ an upright laceless variety which turns bright gold, yellow and crimson in the fall. Also beautiful, the ‘Autumn Moon’ maples promised varying shade of gold to red.

Leaves change color when they are going into winter dormancy. When nights get long enough, leaves develop a corky layer of cells between the leaf stalk and the woody part of the tree. This slows the transport of water and carbohydrates. The manufacture of chlorophyll is slowed and the green color of the leaves begins to fade, allowing the other pigments to show through. Since the transport of water is slowed down, food manufactured by the remaining chlorophyll builds up in the sap of the leaf and other pigments are formed which causes the leaves to turn red or purple in color depending on the acidity of the sap.

For example, sumacs and California wild grape almost always turn red because red pigments are present and their leaf sap is acidic, while many of the oak and sometimes ashes will get a purplish color because the sap is less acidic. Trees like birch don’t have much orange pigment, so they appear mostly yellow in the fall. Others don't have much yellow pigment and turn mostly orange or read. Some trees have a balance of pigments and look pinkish. The brown color or many oaks can be attributed to a buildup of tannins which is a waste product in the leaves.

Years ago after my sister on Washington’s Fox Island lost a tree in a windstorm, I visited a local nursery up there looking to find her a replacement for her prominent accent spot. I had my eye on the rows of coral-barked Sango Kaku maples. Lined up alongside were several trees with bark so bright I couldn’t believe my eyes. “What are these,” I asked? Won, of that nursery, just smiled and told me they were called Beni Kawa Japanese maples and were a cultivar originally developed in 1987. They are prized for their brilliant salmon red bark which is much brighter than the regular coral bark maple. I was hooked. How could I not plant this gorgeous tree in my sister’s yard?

I learned that the bark of this tree can be polished to keep the bright color. Lichen often grows on older trees hiding the salmon red bark of the new branches. I’ll have to try using a soft cloth on my coral bark maple and see how it turns out. The Beni Kawa is a fast-growing Japanese maple that will eventually reach 10-15 feet tall and 5-12 feet wide. It is hardy to 15 degrees.

Won grows his trees in a 50/50 mixture of topsoil blend and finely crushed bark. He fertilizes with a balanced granular fertilizer and prunes in the winter. The 6-foot tree I bought my sister will not need to be pruned for a couple of years, allowing it to establish a strong root system.

So don’t miss out on the Japanese maple season. You won’t regret getting a new one for your yard or patio.