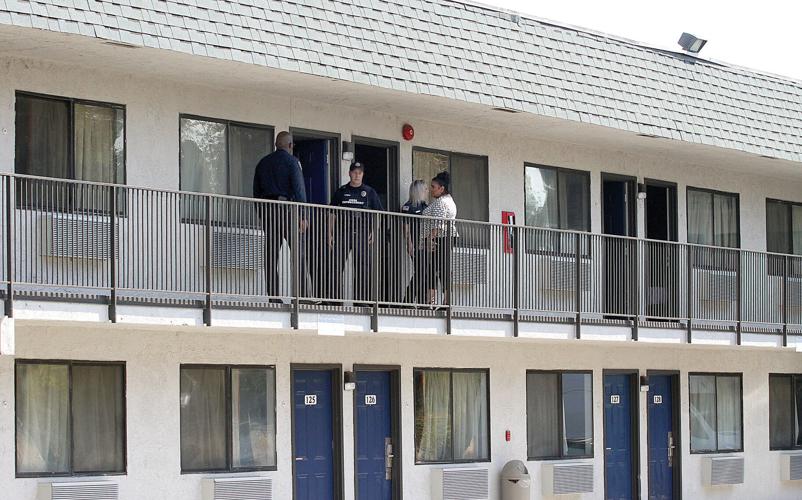 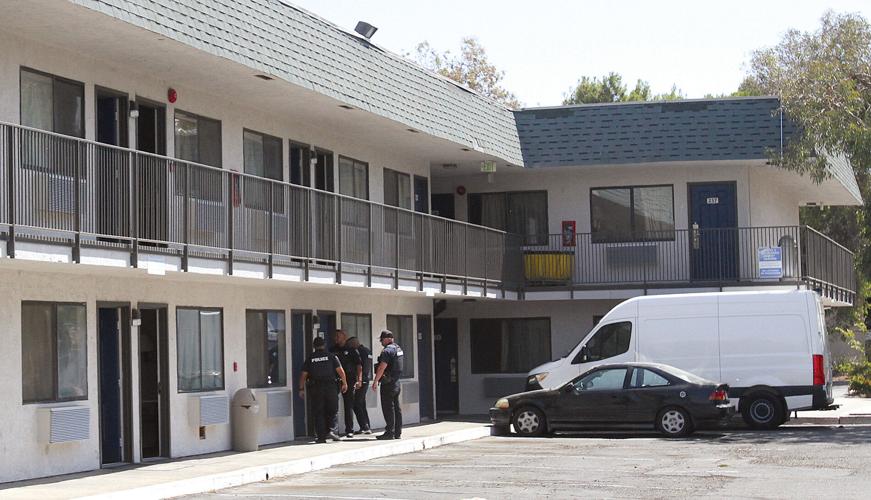 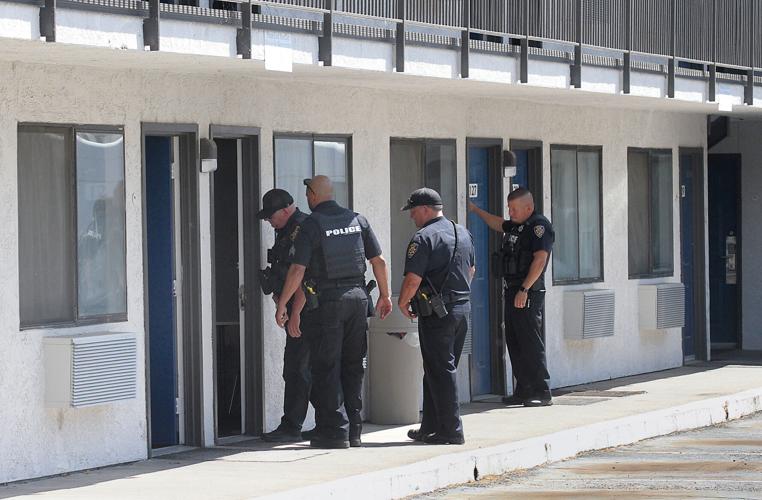 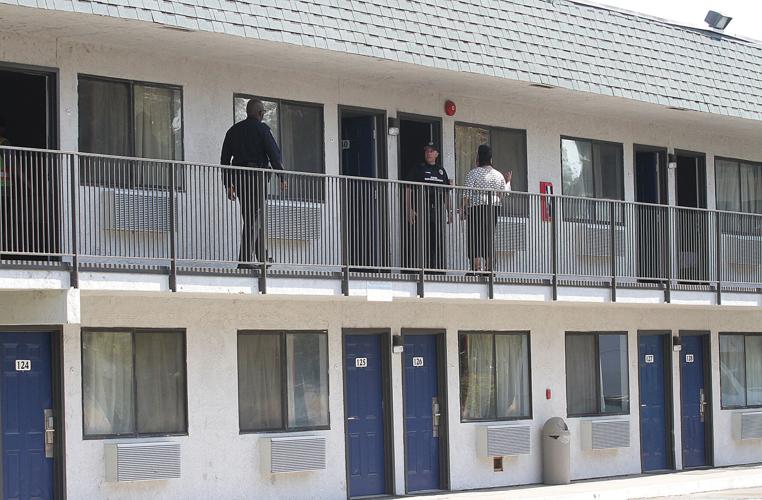 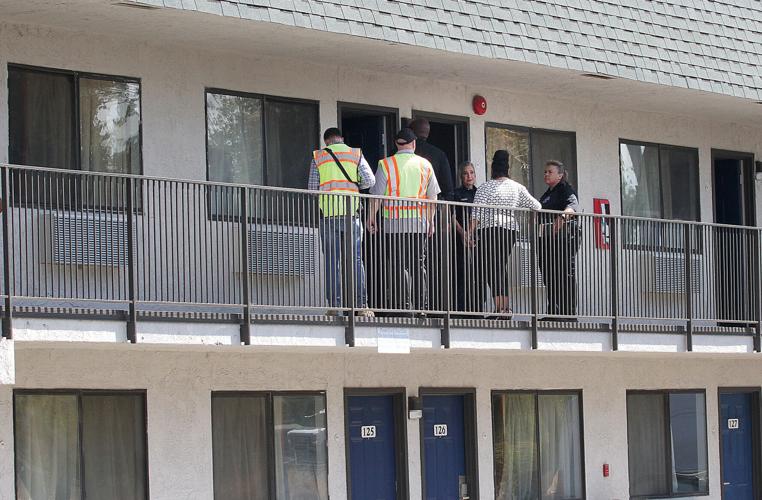 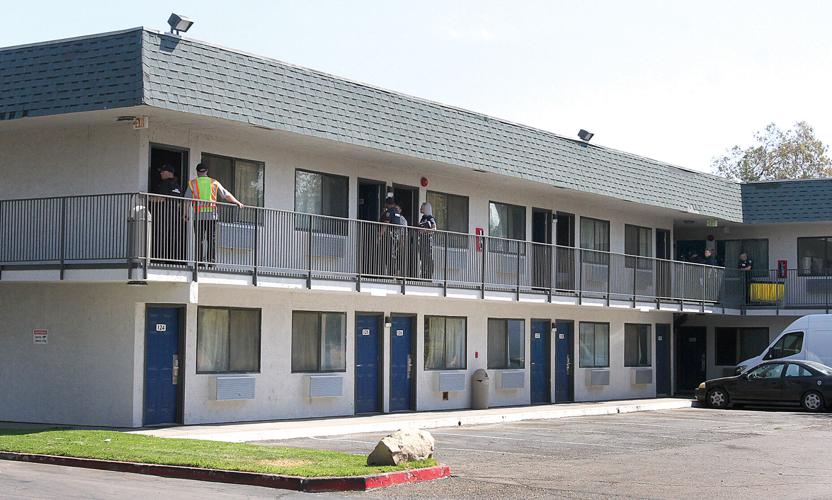 Code enforcement officers with the assistance of police, fire department and a city building official conducted an inspection on Motel 6 Tuesday morning.

Code enforcement officers with the assistance of police, fire department and a city building official conducted an inspection on Motel 6 Tuesday morning.

Police, code enforcement, the fire department and a city building official converged on Motel 6 on North Tracy Boulevard Tuesday morning, moving from room to room to check the building for code violations.

Shawn Potter, a code enforcement officer with the Tracy Police Department, was part of the team examining the motel building.

“Today is a comprehensive inspection of Motel 6. We’re inspecting the entirety of the grounds, the mechanical rooms, the electrical system, the plumbing systems and basically every single room at the motel,” Potter said.

Police officers went door to door checking for anyone inside before code enforcement, fire department and other officials entered to check for violations.

Police have been averaging about 300 calls for service a year to the motel at 3810 N. Tracy Blvd., and stepped up their investigation in late June following an incident that began with a shooting at El Pescadero Park and resulted in an arrest at the motel.

One man was critically injured in the June 20 incident, which involved two homeless men. Detectives traced the suspect, Deandre Goodman, to Motel 6 where he was found in one of the rooms with two firearms and more than 2 pounds of methamphetamine.

During Tuesday’s police search of 40 of the motel’s rooms officers found several unregistered people staying at the motel and conditions in some of the rooms that warranted a referral to code enforcement.

Management at Motel 6 declined to comment to the Tracy Press on the code enforcement operation.

Potter said the city had been aware of unpermitted construction and unpermitted electrical work at the motel before the June 20 incident.

“I already had a case on this, having already been into the mechanical room and seen the violations there, so it’s already been on the radar. But after this incident occurred, with the search warrant that was available to the police department we were able to see things we couldn’t see otherwise,” Potter said. “People creating extra rooms, suites of rooms, and other things happening in there that shouldn’t be happening without building permits.”

Potter said issues range from minor violations -- such as an electrical socket without a cover plate or a fire alert system not working in a room -- to larger violations such as holes being knocked into a wall.

After Tuesday’s inspection a report will be written and a notice and order will be given to the property owner listing the violations that need to be fixed.

“Now the good thing is the property owner knows about this already, management knows about it, and they are already working with us on the process, so they are being cooperative,” Potter said.

The owner will be given a timeline to comply which can be flexible given the state and availability of architects and contractors. Potter said the violations recorded so far could be corrected and the motel brought up to code.

“Obviously we’re going to do what we can to prioritize and execute. We’re going to prioritize the things that are the life-threatening danger and get those taken care of right away and the other things we can be a little bit flexible on, provided they’re moving forward in a consistent manner,” Potter said.

He hoped the community would be eventually able to see a change in the motel and surrounding community.

“Right now we have a lot of resources out here. We have fire out here, we have code enforcement out there, the chief building official, our police chief is out here, we have sergeants and lieutenants out here. This is a big concern for us, this is a huge quality of life problem for the area and we’re looking to get that solved, Potter said. “For us it is a pretty big operation and we’re looking to get this place ship-shape. The new management wants it to be a little more upscale and that will change the quality of life for the area in my opinion.”