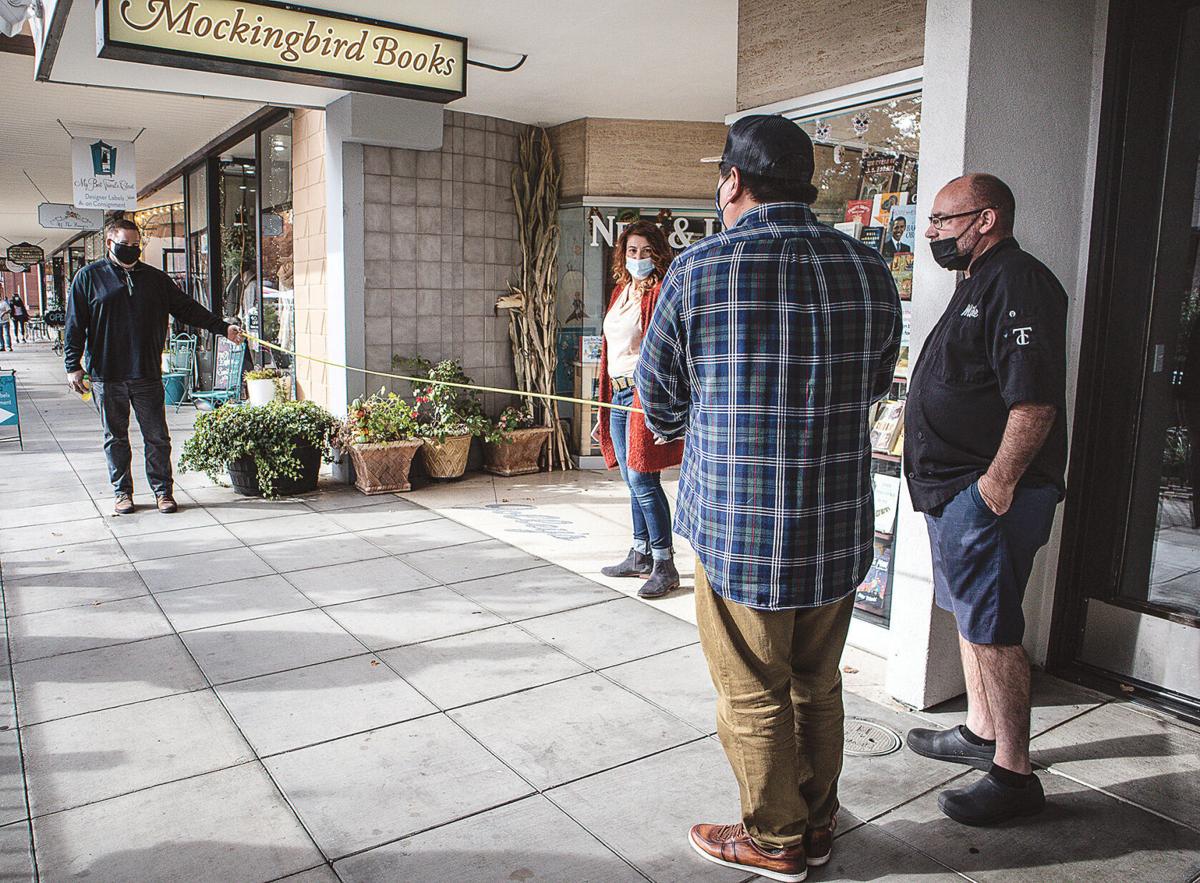 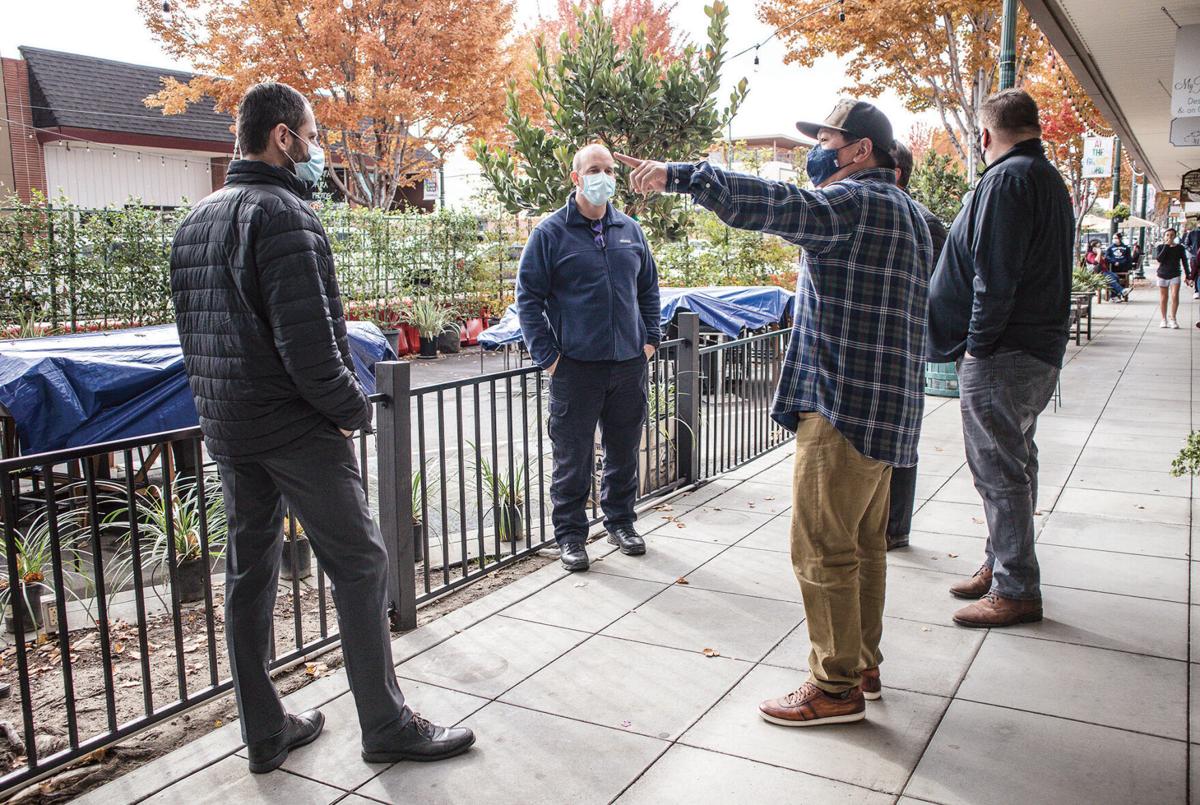 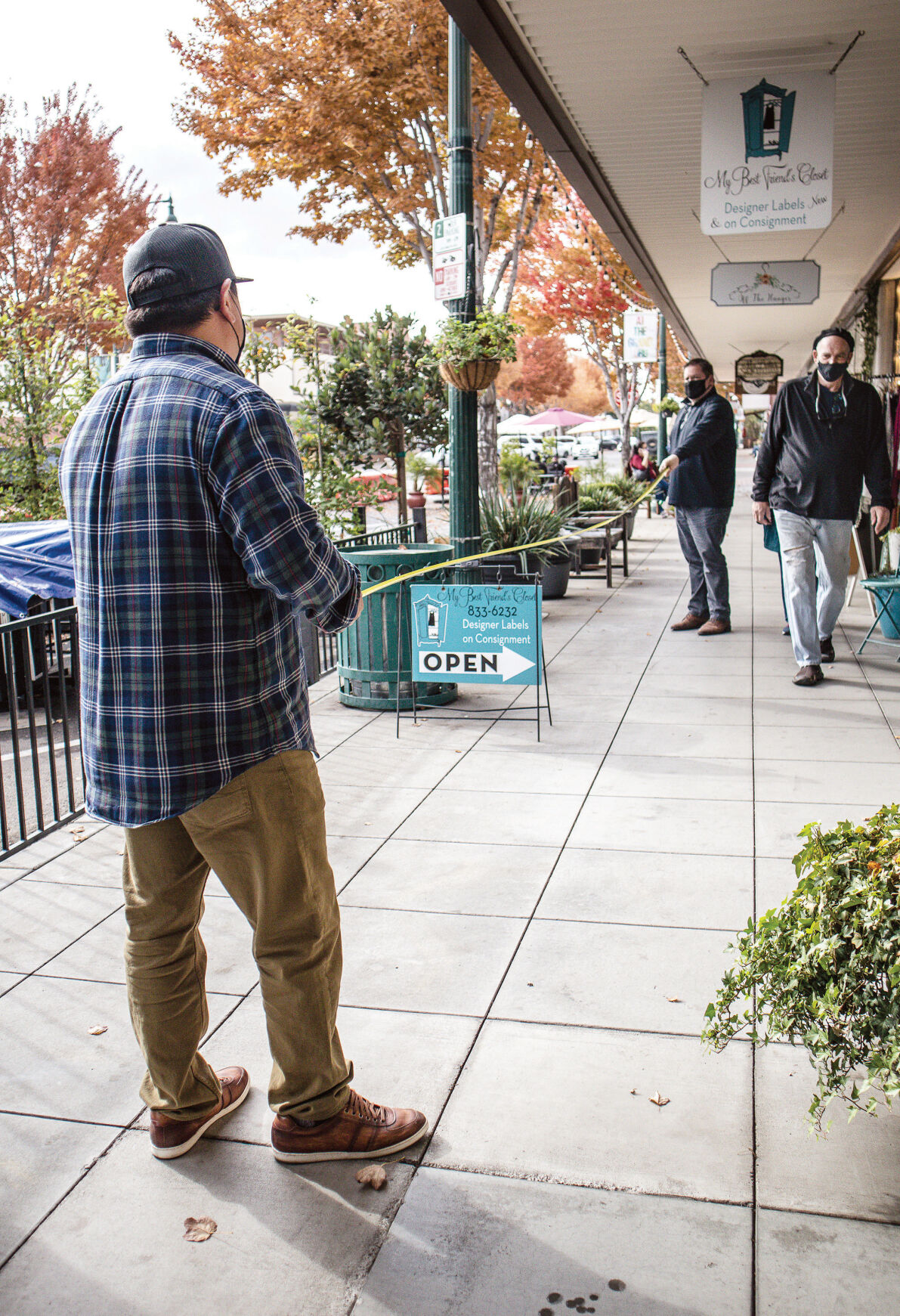 Tracy City Center Association President Johnnie Oh measures space outside of My Best Friend's Closet in downtown Tracy on Nov. 18 with the assistance of TCCA Executive Director Dino Margaros. MBFC is one of the neighboring storefronts presently affected by visibility obstruction from Oh's outdoor dining setup for his restaurant, The Commons. 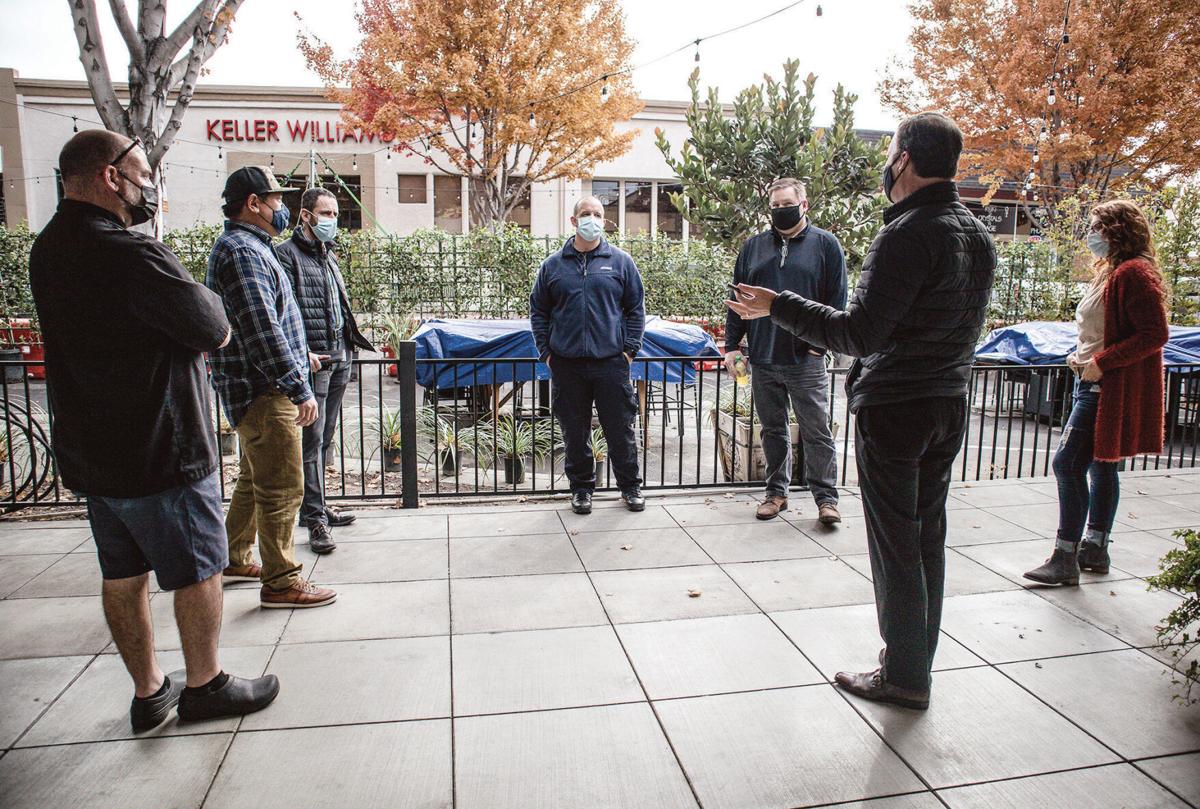 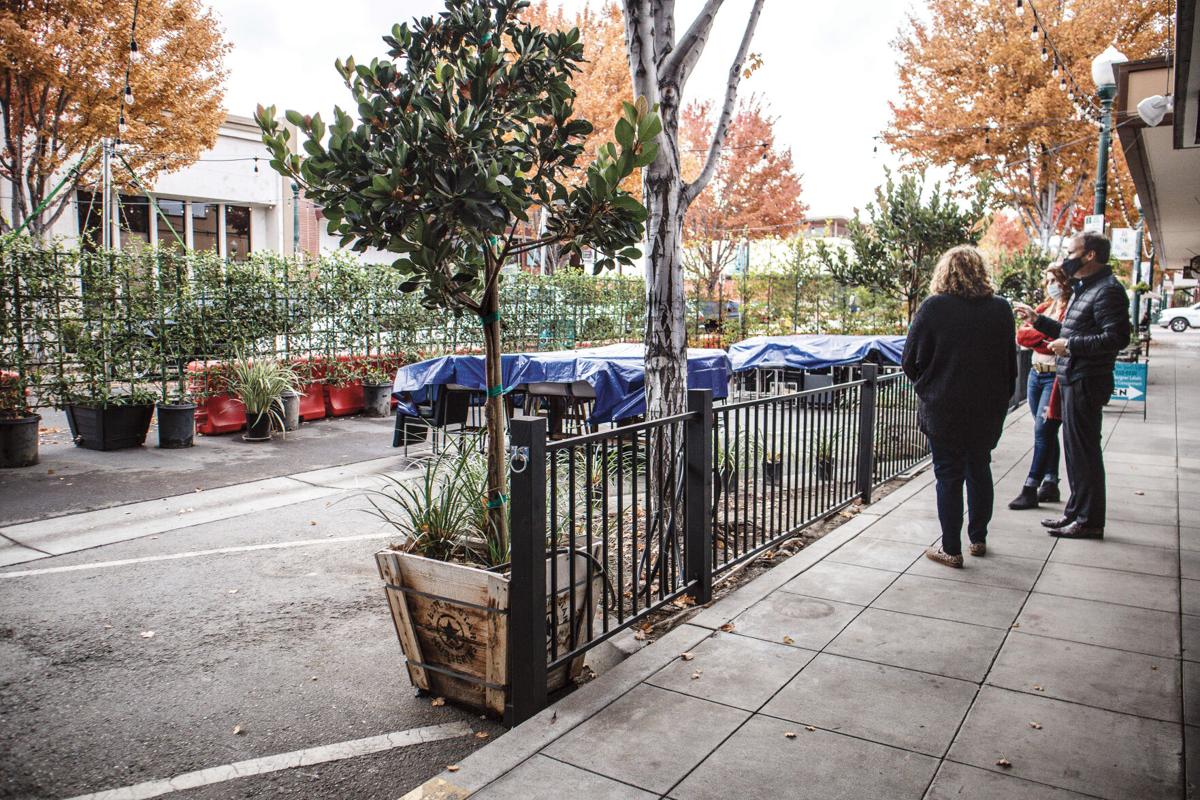 Current outdoor dining setup for The Commons restaurant in downtown Tracy displays a nursery with string lights to give ambience and a veil of privacy for patrons. The new setup will create more access and visibility for neighboring retail store fronts. 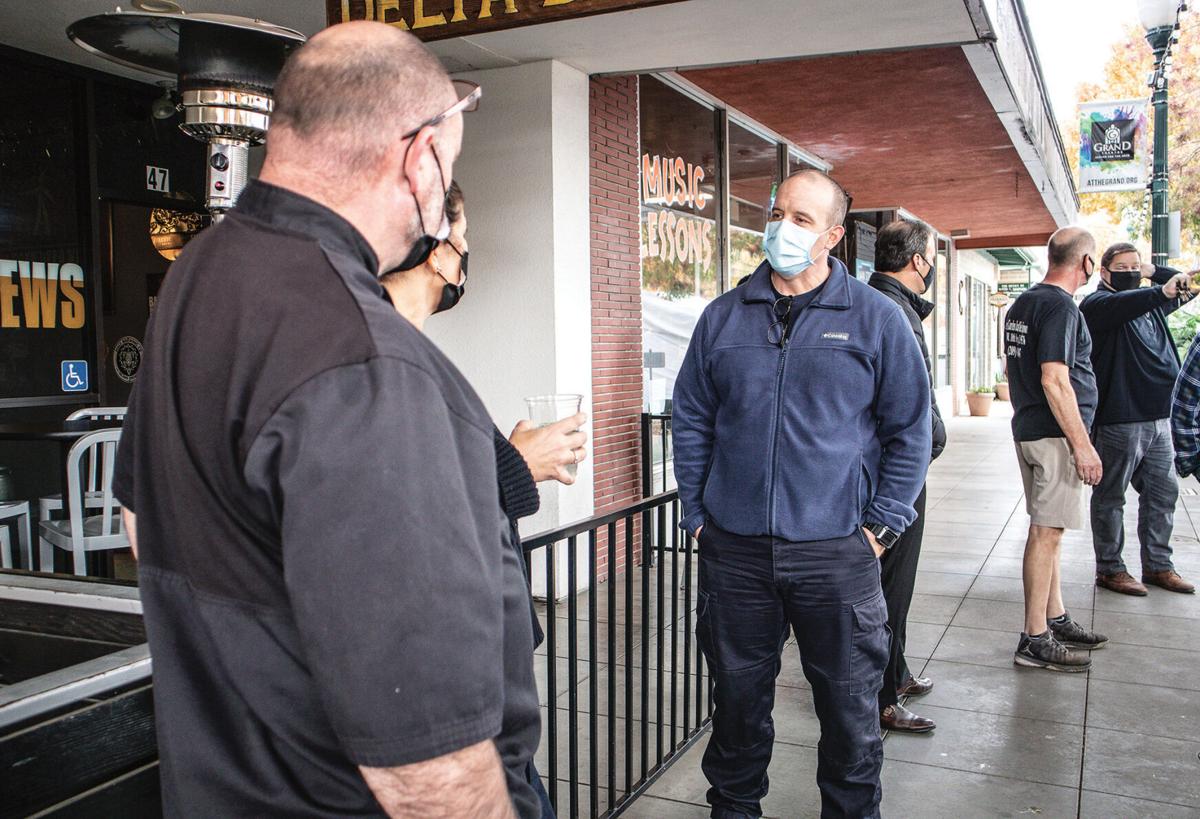 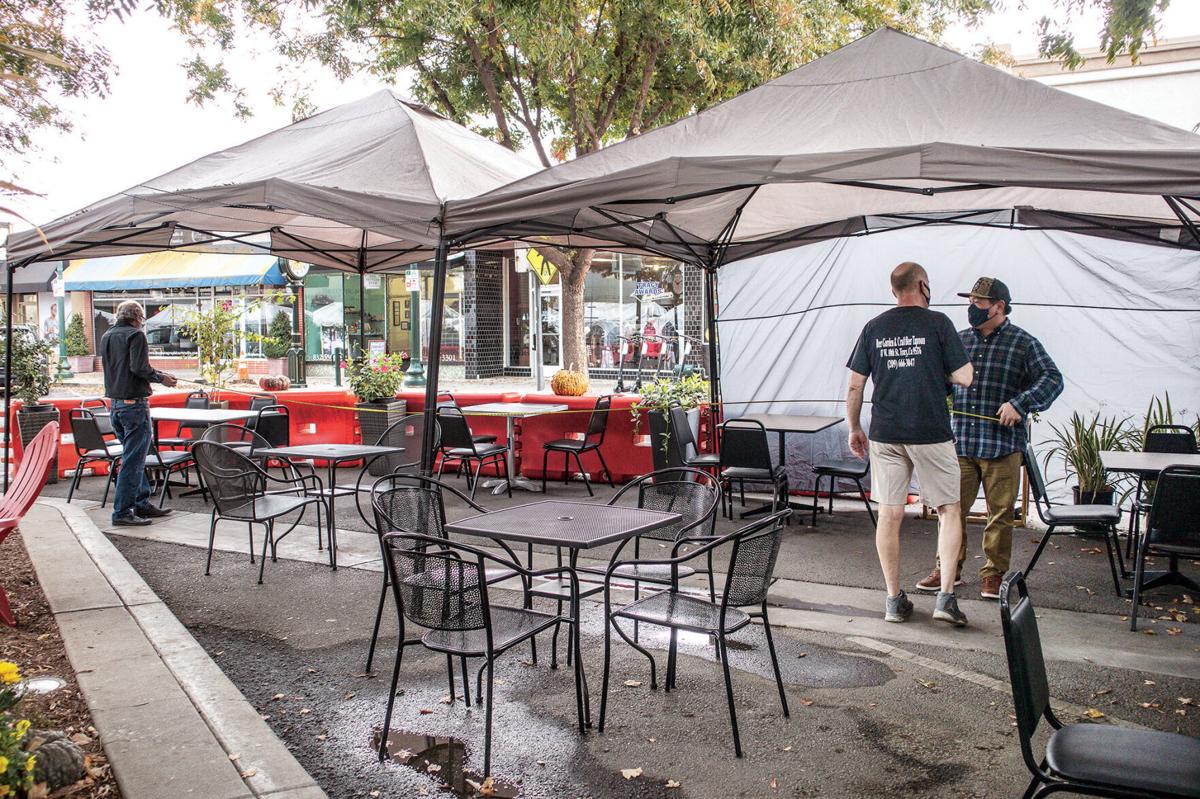 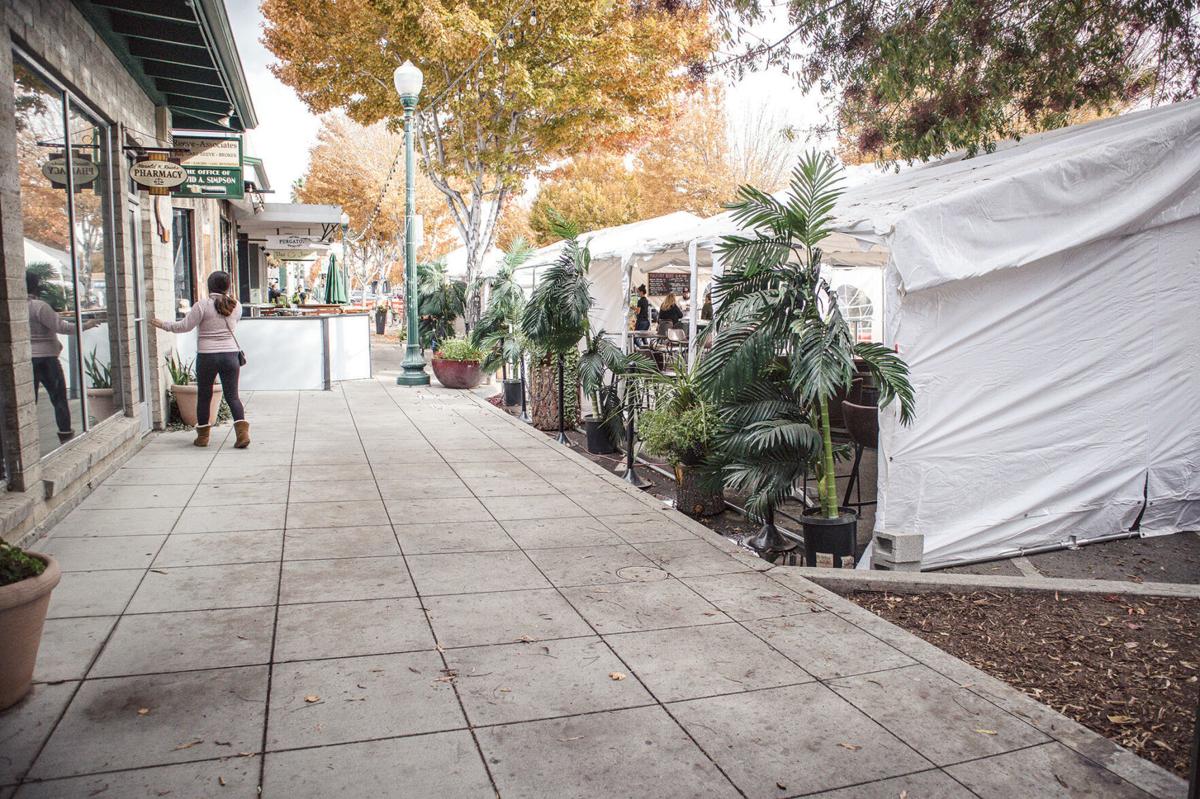 Tracy City Center Association President Johnnie Oh measures space outside of My Best Friend's Closet in downtown Tracy on Nov. 18 with the assistance of TCCA Executive Director Dino Margaros. MBFC is one of the neighboring storefronts presently affected by visibility obstruction from Oh's outdoor dining setup for his restaurant, The Commons.

Current outdoor dining setup for The Commons restaurant in downtown Tracy displays a nursery with string lights to give ambience and a veil of privacy for patrons. The new setup will create more access and visibility for neighboring retail store fronts.

After a series of workshops and meetings with businesses, city and county officials and members of the public, TCCA's board of directors voted on a compromise resolution that would detail guidelines on downtown Tracy's outdoor dining experience that would less impede the visibility and access to other retailers for a duration of the pandemic until further steps were needed. Additionally, the board discussed the fire code regulations in regards to canopies and heaters for the winter.

"I think in general, it boils down to the merchants along 10th Street that are concerned about their visibility with the outdoor seating. The restaurants are concerned about their capacity. Now that we are back in the purple tier, they're at zero capacity indoors, so their only ability to see people now or accommodate patrons is outdoors," said Dino Margaros, executive director of TCCA. "So, you know, it's going to take a little bit of compromise on both sides with respect to visibility that the merchants want for their stores during the holiday season and the capacity for seating outdoors that the restaurants need to survive on their side."

The COVID-19 pandemic has impacted businesses around the country, forcing owners to get creative in their practices to keep things afloat. With restaurant dining restricted to outdoor only in most counties in California — San Joaquin County included — restaurants have resorted to creating temporary outdoor dining areas to supplement takeout and delivery orders. This usually includes the use of a pop-up tent or canopy to shade patrons from weather elements and to give them a veil of privacy.

Dozens of restaurants around Tracy have adopted this practice, including those in the downtown area. With the use of special event and encroachment permits, parts of downtown Tracy — predominately on 10th Street's parking areas — have converted to "streateries," closing off part of a street to have a larger capacity for diners outside.

However, the solution for restaurants creates visibility problems for their retail neighbors. There is also the issue of visual uniformity amongst tents and canopies.

"I have a bar in front of my store. I don't want a bar in front of my store," said Ken Cefalo, owner of Mainstreet Music, during one of TCCA's virtual workshops on Nov. 11. Though Cefalo gave support of making sure restaurants downtown are able to stay in business as close to normal as possible, he stressed the importance of doing so in a way that didn't disrupt the clientele of retailers.

After hearing feedback from both sides and an in-person meeting to survey the outside of 10th Street, a compromise was met: restaurants would seek out less obstructive options to accommodate better accessibility to retail storefronts, such as purchasing tents with transparent sides and trimming down visibility of fences and foliage around some establishments, such as The Commons, which currently uses an outdoor nursery for its barricade.

Tim Spears, Fire Marshall for South San Joaquin County Fire Authority also met with downtown restaurant owners to give guidance for compliance with the county's fire code. In addition to needing a flame-retardant fabric on tents and canopies, Spears advised that larger tent and canopy spaces that met certain specifications would also need a 12-foot fire break in their walkways. Restaurants using propane-powered heaters also had to ensure that heaters were placed at least five feet away from structures in order to reduce the risk of carbon monoxide poisoning.

"I think now there's some continuity that will be in place," said Johnnie Oh, owner of the Commons and president of TCCA, during last Friday's board meeting. "I think we did exactly what we needed to do, take everyone's — all the board members, all the merchants, all of our shareholders — into consideration, their viewpoints, and kind of step out on our best foot here."

This solution is meant to be only temporary as the City of Tracy will have to extend permits for up to 180 days before more permanent solutions, such as small "parklets" may have to be considered due to code compliance.

With the state changing its COVID-19 quarantine guidelines on a fluid basis, dependant on the data of positive COVID-19 cases, uncertainty is a factor that leaves restaurants apprehensive about investing in new tents and heaters that can set already struggling businesses back thousands of dollars. Capacity guidelines for restaurants from the state and county have changed intermittently from allowing only delivery and takeout to giving the option for outdoor dining to allowing patrons at a limited number inside an establishment. Currently, restaurants in San Joaquin County are allowed to serve in-person with an outdoor dining setting, a change from two weeks back when restaurants were still allowed to serve 25% of patrons indoors.

"So the outdoor dining that we have on 10th Street initially kind of was a discussion, 'Hey, we've got to figure out some sort of solution,' you know, back when COVID kind of started. Same scenario, we were kind of under the gun. The restaurants were kind of caught by surprise that the state shut down indoor dining at that time," said Margaros, reflecting back to the start of the coronavirus pandemic. "So we're kind of back at square one again, after a couple iterations of 'Oh, you can dine inside a little bit, 25%.' You know, it's like, there's just no consistency. And I think that's where a little bit of the fear is coming from right now."

Los Angeles County, for example, just passed an ordinance this week that limited restaurants to serve at the capacity of only delivery or takeout, taking away indoor and outdoor dining options for at least the next three weeks.

"What I'm afraid of is, you know, they're willing to shut down LA County, which has a tremendous number of restaurants, high-profile, that kind of thing. Who's to say that they won't do it here depending on our numbers?" said Margaros.

TCCA sent out a letter to downtown stakeholders last Friday to offer itself as a resource while businesses try to navigate the ever-changing situation and also advised restaurants to reach out to Spears for any inquiries on tent and canopy setups.