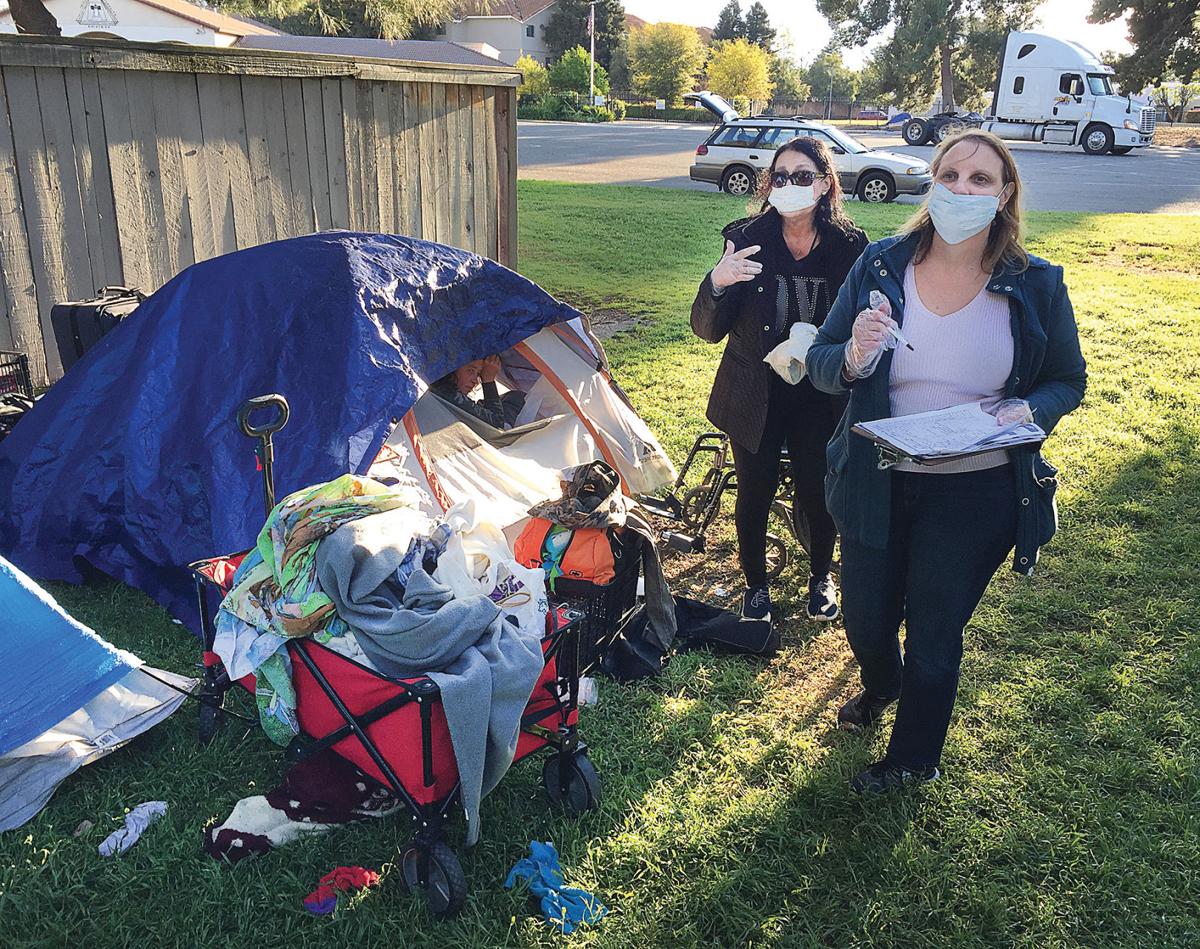 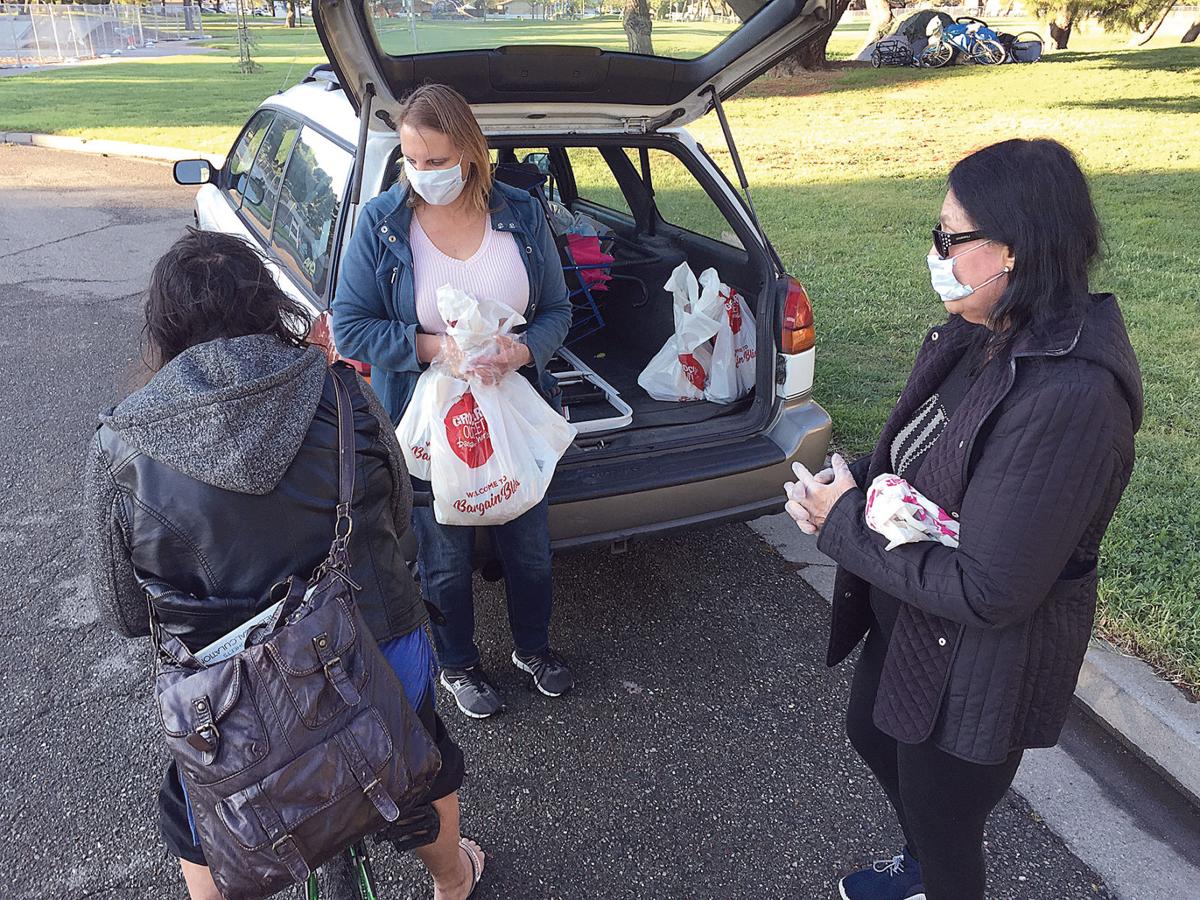 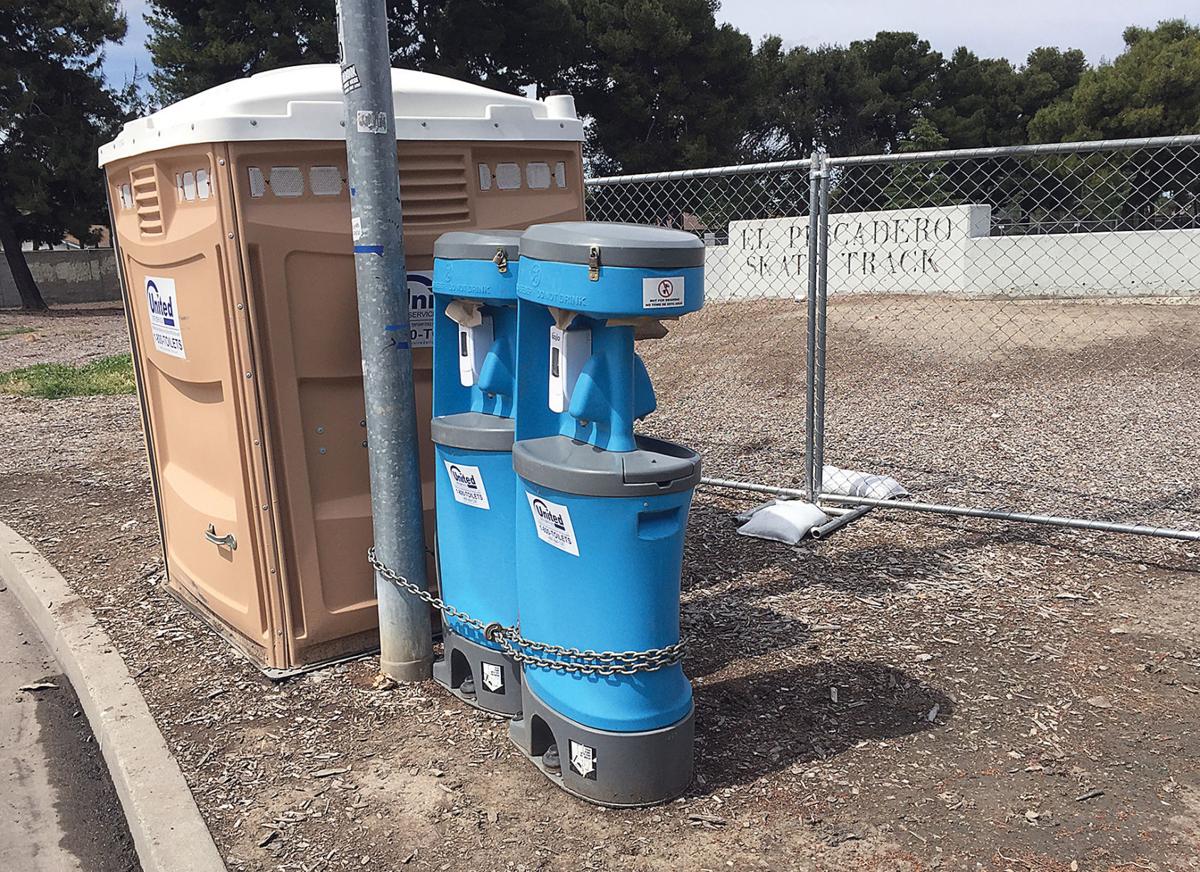 The city has set up a portable toilet and hand-washing station at El Pescadero Park, where people living in tents are staying until the city can find a long-term solution for homeless people in town.

The city has set up a portable toilet and hand-washing station at El Pescadero Park, where people living in tents are staying until the city can find a long-term solution for homeless people in town.

Social distancing orders issued in response to the COVID-19 pandemic have accelerated the effort to find shelter for homeless people in San Joaquin County.

A county-led effort now underway to put state funds to use would also help Tracy find shelter for local homeless people at a time when state and local officials have urged all people to find a safe place to stay for the duration.

A stay-at-home directive was issued by the Tracy City Council on March 17, followed by a similar order from San Joaquin County Public Health Services on March 21 and an even stricter county order on March 27.

The county orders also urge people experiencing homelessness to find shelter, and government agencies to provide that shelter. Three weeks after the city’s directive and county’s original order, city parks still have tents scattered around them.

Now the most encouraging proposal looks as if it will come from a statewide initiative that Gov. Gavin Newsom launched on March 4 when he issued his proclamation of a state of emergency. Passage of Senate Bill 89 followed on March 17, authorizing $500 million to provide shelter for homeless people, including $150 million that would go to city and county governments and continuums of care, which are local homeless support programs operated under the U.S. Department of Housing and Urban Development.

Adam Cheshire, San Joaquin County’s program administrator for homeless initiatives, is the county official gathering those state funds so that the county can lease motel rooms to shelter homeless people for the duration of the COVID-19 emergency.

All of the county’s allocation, about $100,000 of the San Joaquin Continuum of Care’s allocation and possibly as much as $650,000 of Stockton’s allocation, pending a city council vote next week, will go toward Project Roomkey, the name of the governor’s initiative.

Cheshire said he was just one part of the effort. Others in the county government were negotiating with motel owners to see how many buildings and rooms the county could lease to provide a safe place for people needing shelter to self-isolate.

“SB 89 very much contemplates engaging in that strategy, and the funds that are being made available are there to cover those costs to a large extent,” Cheshire said. “What the county is focused on … is participating in contributing work to this process of leasing a motel and placing the homeless in it and providing the necessary services for the period of time necessary to keep them safe from coronavirus.”

When Project Roomkey becomes active will depend on negotiations with hotel and motel owners.

“The hope is very, very soon,” Cheshire said. “Our sense of urgency could not be greater considering the consequences that could be involved.”

Any center the county opens would also benefit the city of Tracy. Tracy’s efforts to provide some kind of shelter for homeless people was in progress as of early March, when city officials reported that a community group had responded to a request for proposals to open a warming center, and a far-reaching homeless strategic plan was due for City Council review March 17.

That was before the stay-at-home orders. As of last week, the city reported that it was still in contact with the community group, and on Tuesday, council members told City Manager Jenny Haruyama that they’d like to see the homeless strategic plan back on their agenda, even if that meant having the consultants who prepared the plan reporting from a remote location.

Haruyama also reported that she was continuing to track the county’s present efforts with the expectation that Tracy would be part of them.

“Negotiations are underway at one particular facility in San Joaquin County for hotel space,” she told the council. “Details are unfolding on how that’s going to be rolled out.”

It has also drawn the interest of local people who have worked at helping the homeless.

People involved with Tracy Community Connections Center have been doing what they can to help the homeless. The group had set up portable showers twice a week at New Heart Community Church on Bessie Avenue, and New Heart is one of the local churches that provides meals to homeless people.

Melinda Ramirez, a caseworker with Tracy Community Connections Center, said the COVID-19 distancing requirements had cut into what the group could offer. Many of the group’s volunteers, including many retired people, have had to step back from their activities as they are in the high-risk categories for developing severe symptoms from the coronavirus.

The showers had to end, though people still hand out meals and deliver them to people in local parks. Ramirez added that her group also sought to put people in hotels, but with COVID-19 now a factor, that would require an intensive effort that could overwhelm the local group.

But she’s been in touch with Cheshire and sees the benefit the county program could have for Tracy people.

“It’s going to be countywide, so any homeless person that’s referred to this can go. It doesn’t matter what city they’re in, and they had talked about providing transportation,” she said. “At the hotel, a medical professional will check in on every client daily to keep track of how they’re doing. They’ll be providing food, security, everything. They have a lot more resources than we would be able to provide locally.”

Ramirez is still actively seeking grant money to help local homeless people, and this week she was busy with an application for a share of the San Joaquin Continuum of Care allocation. After committing $100,000 of its state allocation to Project Roomkey, the Continuum of Care made about $400,000 available through a notice of funding availability. Programs that support emergency shelter operations and services affected by COVID-19 are eligible for a share of that money.

San Joaquin County now has a way for more people to get tested for the novel coronavirus.