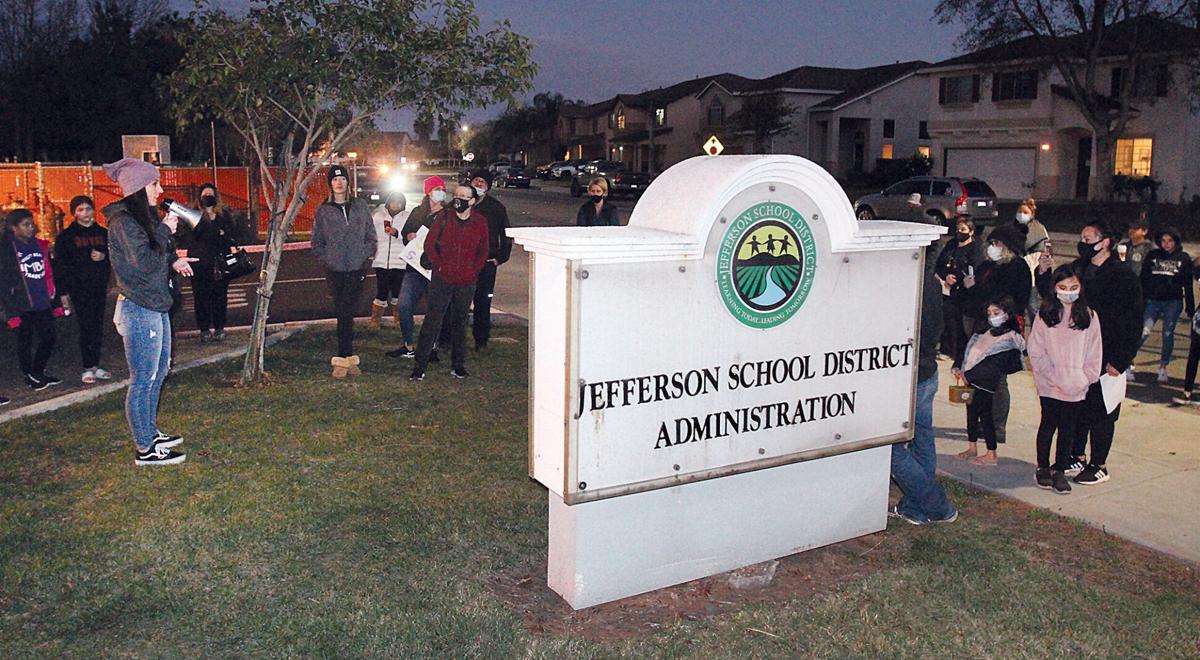 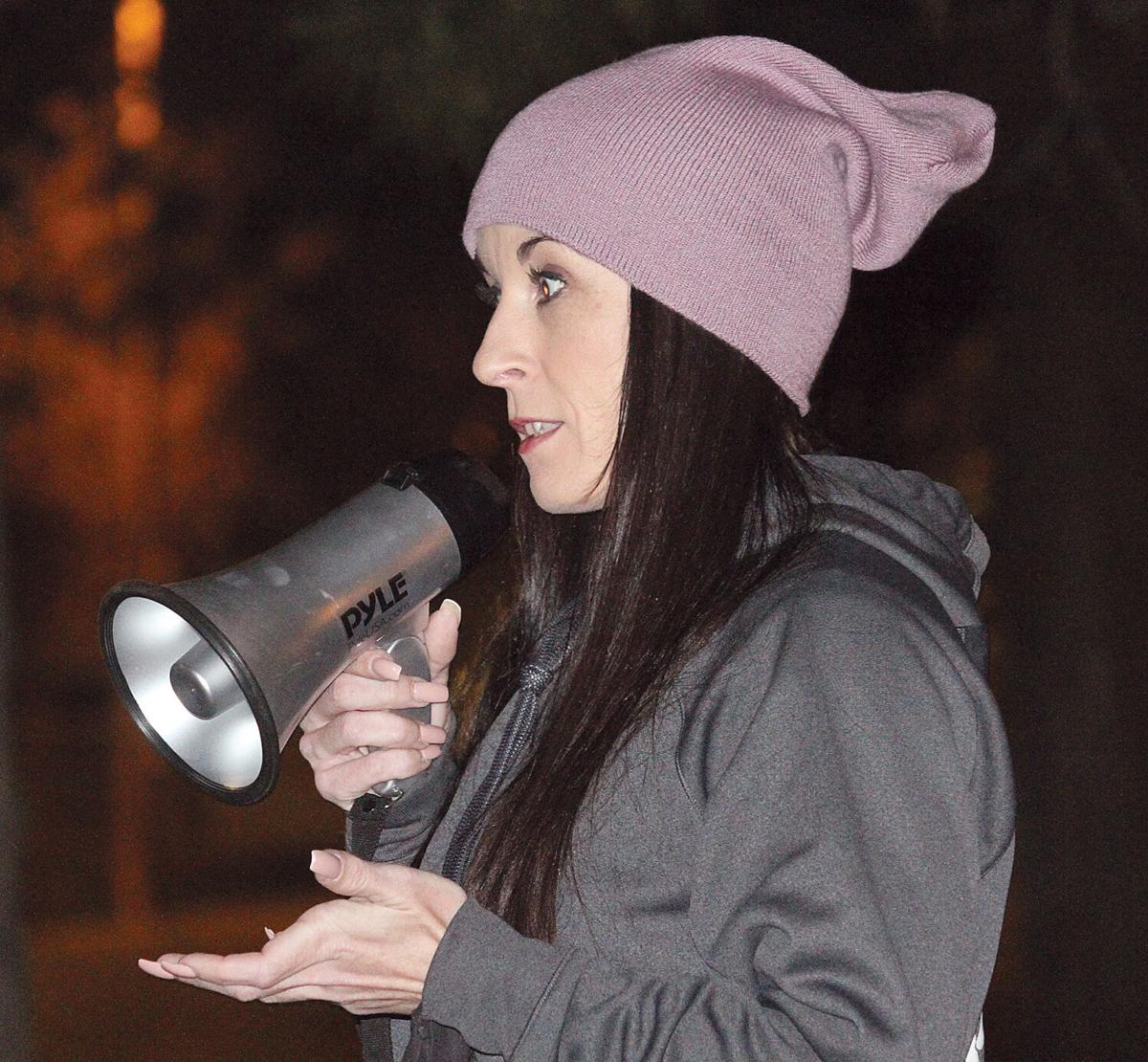 Jolene Gularte (left) speaks to parents Tuesday evening about the need for students in the Jefferson School District to return to in-person instruction. 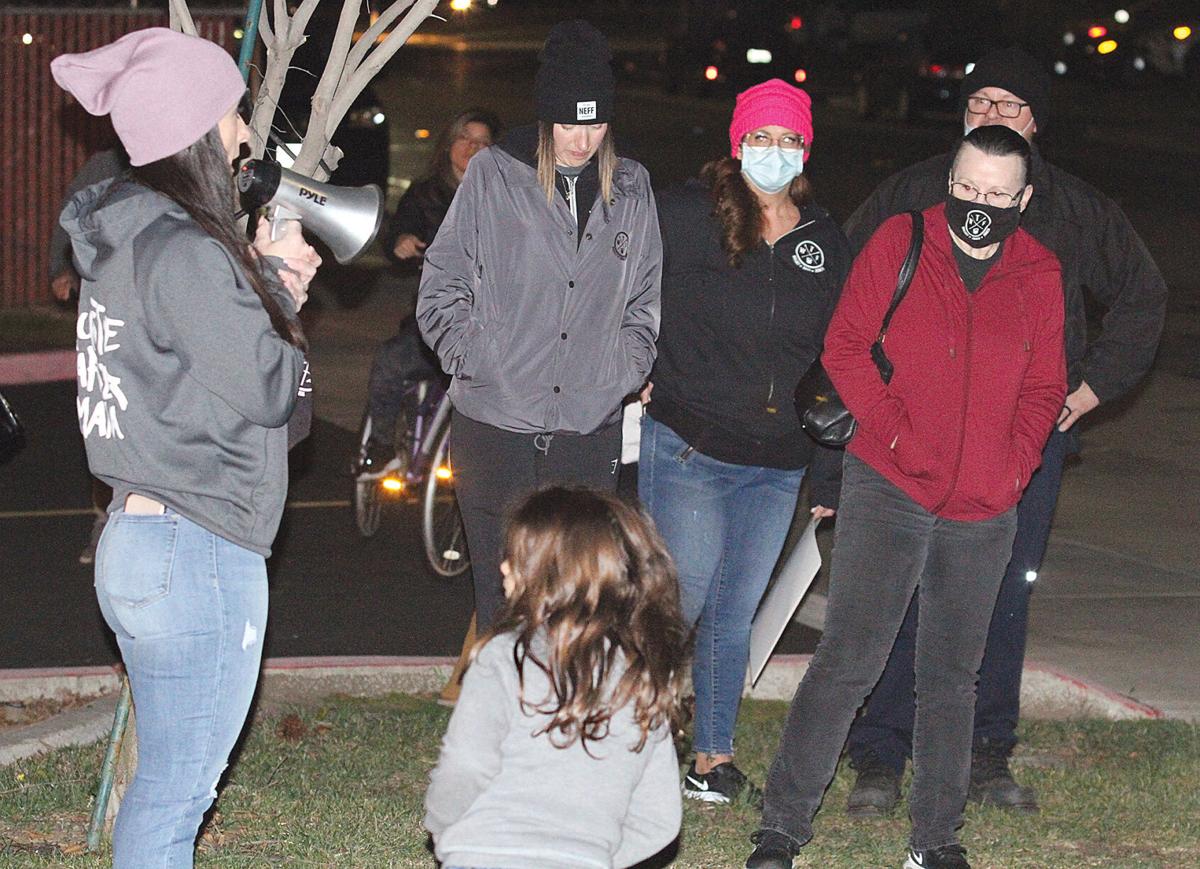 Jolene Gularte (left) speaks to parents Tuesday evening about the need for students in the Jefferson School District to return to in-person instruction.

Frustrations were felt all around when parents received a notification Friday evening from Jefferson School District Superintendent James Bridges, informing them that students would not be returning to campus on Tuesday as originally planned.

According to Bridges, the letter “contests the authority of the District to open under the new California Department of Public Health guidance.” In its opening paragraph, the letter acknowledges that JSD had planned to bring students from transitional kindergarten through 3rd grade back to school Feb. 16.

“Doing so under current conditions — while San Joaquin County remains in the deep purple tier reflecting widespread and unchecked COVID-19 community spread — is not only deeply misguided, it is also unlawful,” the letter goes on to state.

As a result, JSD’s Board of Education held a special meeting Wednesday evening to discuss potential unspecified litigation and to set a new reopening date for its schools. The board voted unanimously to return TK through 6th grade students to campus on March 3 or “as soon as legally permissible,” per the motion made by Trustee Brian Jackman and seconded by Trustee Pete Carlson.

Under Gov. Gavin Newsom’s Safe Schools for All plan, schools may not reopen if the adjusted case rate in the county is above 25 cases per 100,000 people per day. The only exceptions to this rule are if a district had already been counted as reopened before stricter shutdowns under the purple “widespread” tier had been in effect.

At previous school board meetings, Bridges had documented his progress on getting clarification with the state and county offices on if the small cohorts of special education and at-risk students would place the district in the category of reopened. After these details were worked out and preparations were put in place, the board had voted at a special meeting on Jan. 29 to start phased campus reopenings on Feb. 16, with the goal to bring students from all grades wishing to return to campus back by early March.

The CTA argues in its letter that under these conditions, JSD’s in-person instruction fell under the “small cohort” rules, which did not constitute as “reopened” under state guidelines.

JTA president Jeniene Cruz wanted to clarify that the purpose of the cease and desist letter was not intended to prevent students from returning to campus, but merely to seek documentation to confirm that the district was following all of the proper reopening guidelines laid out by the state. Cruz said that the union had been asking Bridges for that documentation over the course of weeks, and she stressed that cease and desist letter was not a last-minute decision, as parents may have perceived upon receiving Bridges’ notice on Friday evening.

“We were prepared to go back to school -- the teachers were -- on Tuesday, February 16 if that's what they directed us to do. We were prepared. Our classrooms were ready. We had told the students that we were hoping to see them,” Cruz said. “But again, the question from the union was that we need to follow the guidelines, and why wasn't the district following those guidelines? And that's all it boils down to, is we wanted the guidelines followed. And they couldn't provide us documentation.”

Jolene Gularte is one of the many parents that felt blindsided from the sudden notice that school reopenings were once again postponed. The self-employed single mom of two had been advocating for students to return to campus for months and was relieved when the board initially had their dates set after weeks of board discussion and presentations.

She said the notice of postponement was sent out to parents around 6:30 p.m. on Friday night, stating that the district had received a cease and desist letter from the CTA at 9:26 a.m. that morning. Gularte questioned why parents and teachers weren’t notified sooner, especially when students were getting excited about the upcoming in-person school week.

“My frustration with this whole process is, you know, the superintendent and the school district should have had a grasp on what the JTA was going to do. And they shouldn't have allowed all of the kids to get excited, and then pull that away from them,” said Gularte.

As a way to advocate for her children, Gularte organized a demonstration in front of JSD offices on Tuesday evening and shared a video on YouTube of her thoughts on the situation, pleading for community support. The circulated video garnered over 2,000 views.

“We were given plans, layouts of where to show up and drop off your kid. We got to hype up our kids, and then tell them, ‘just kidding.’ So that part of it makes me really angry,” said Gularte at the “JSD Failed the Kids” rally.

“I would also like to make sure that I point out that I love my teachers. I am friends with and very close with a lot of different teachers. I support them. My messages and statements that I've made regarding going back to school have absolutely nothing to do with anything negative towards any teacher, so I just want to put that out there right now. I love and respect all of the teachers. And I just wish that all of them were as dedicated as some.”

Before voting took place at the special board meeting Wednesday night, Bridges read a statement to give a summary of events from the past few days, provide details from the closed session and to discuss next steps.

“The district responded to this (cease and desist) letter with supporting documentation received on Feb. 12 2021 from San Joaquin County Public Health Services. The letter states the Jefferson school district is considered open and could continue its phased opening plan,” said Bridges. When the district did not receive a response from CTA/JTA, it had no choice but to notify parents and heartbroken students of the fact that school would not be able to start on Feb.16 2021 as planned. The district wanted to make sure parents had time to plan for childcare and other necessary arrangements.”

Bridges added that, instead of accepting the supporting documentation, the CTA had requested additional documentation to challenge the reopening.

“Jefferson school district does not believe it's in the best interest of our students to litigate with the California Teachers Association, the nuances of what the word ‘open’ means, or who has the legal authority to constitute a school district, open for in person instruction. For this reason, the board has decided to set an opening timeline that is clearly defined and defensible without further legal action,” said Bridges.

Cruz was able to confirm that the JTA had received documentation on Feb. 12 but had requested further clarification. She said the JTA hadn’t received a reply until after the cease and desist letter was sent, and that it was in the form of a community letter.

She appreciated that the board voted to not reopen schools until it was legally permissible and hopes that the district will own its decisions moving forward.

“JTA leadership is very tired of the misconception that's going around that the teachers and the educators are against reopening our schools. That has never been our stance. We want to open the schools when it is safe to do so and when the district has followed all of the county guidelines,” said Cruz. “As far as I'm concerned, the guidelines are the guidelines. And we all need to comply with those guidelines and follow them.