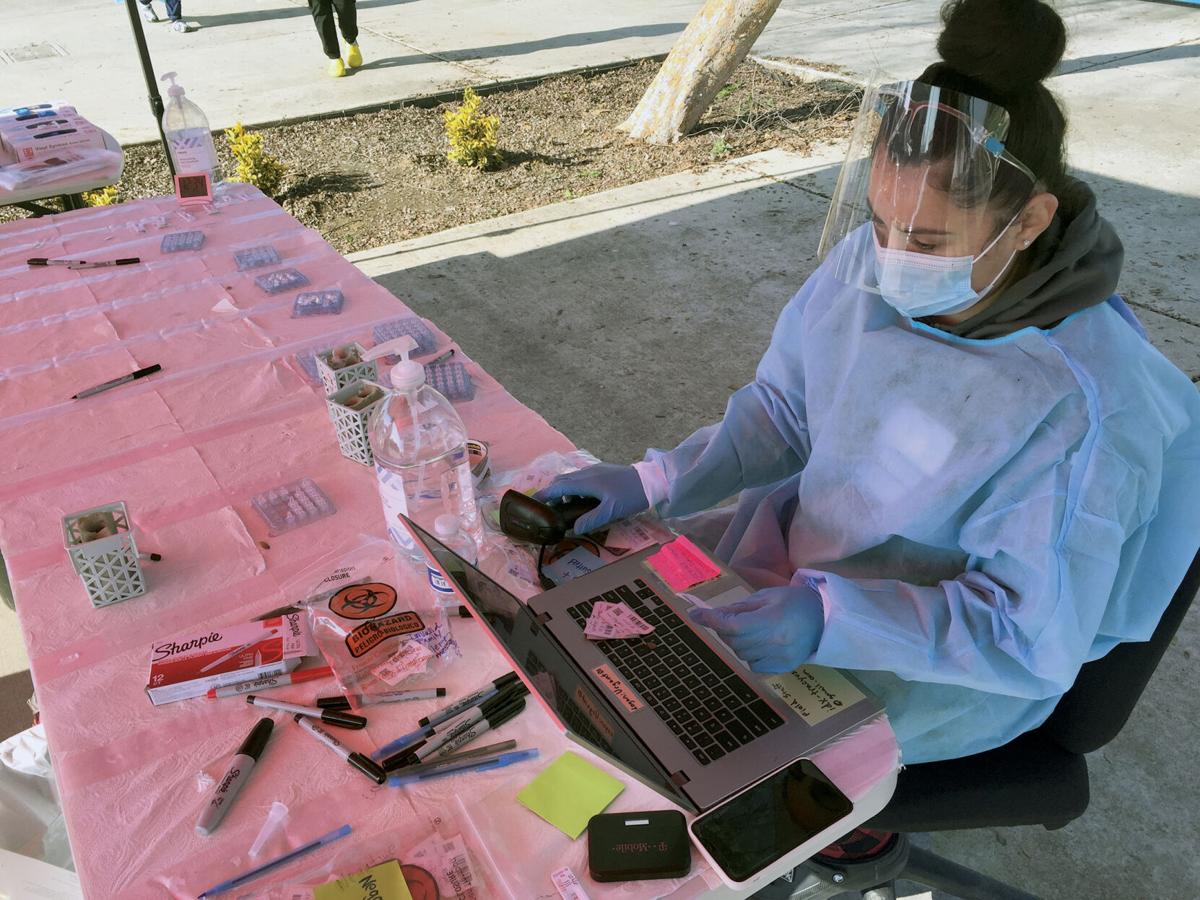 Jessica Aguilar, a nurse with Heal 360, documents information on COVID-19 tests done at the Tracy Independent Study Charter School on Corral Hollow Road. She estimates that she and her staff do between 900 and 1,200 tests every day. 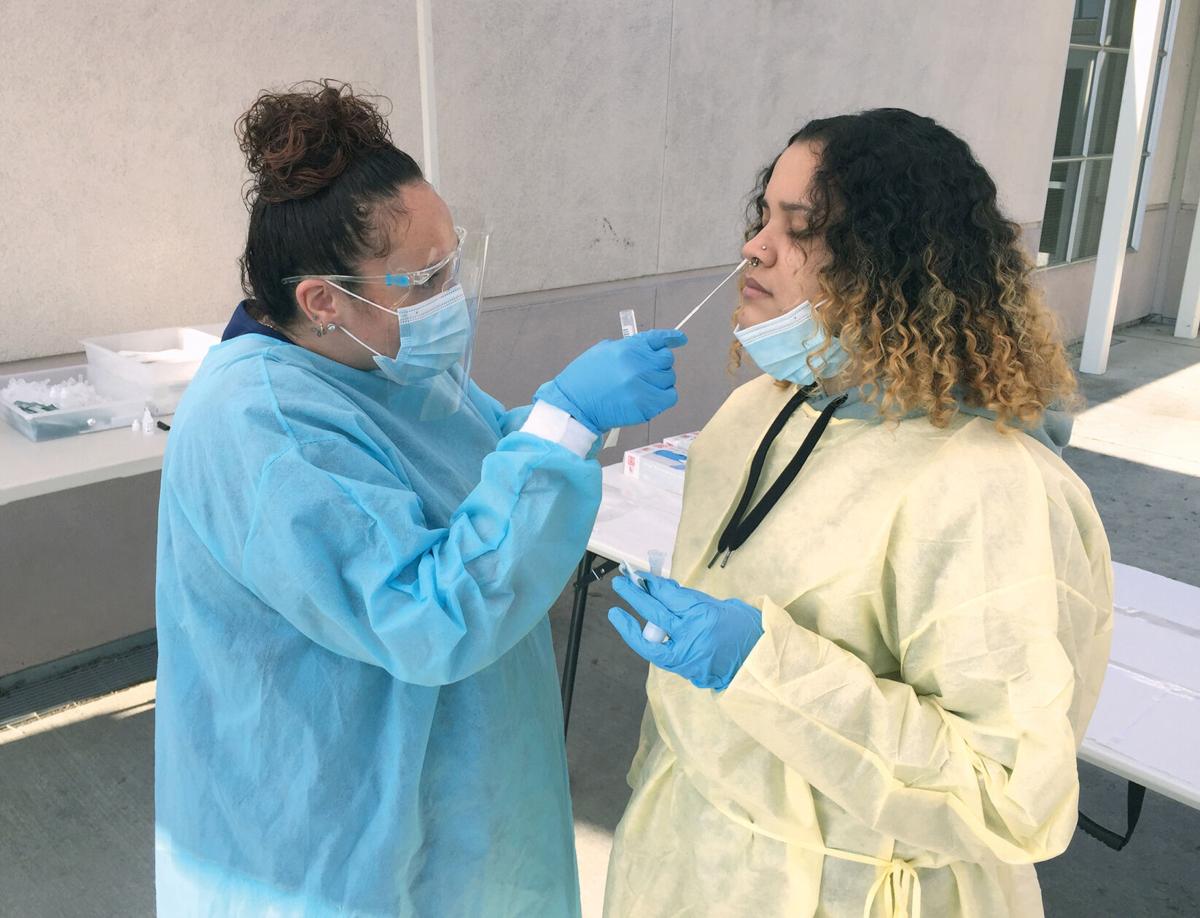 Medical assistant Rachele Ruiz collects a nasal swab from fellow medical assistant Kaylah Ricks Van Ness at the Tracy Independent Study Charter School on Corral Hollow Road. The staff from Heal 360 test themselves a couple times a week as they also test 900 to 1,200 people for COVID-19 every day. 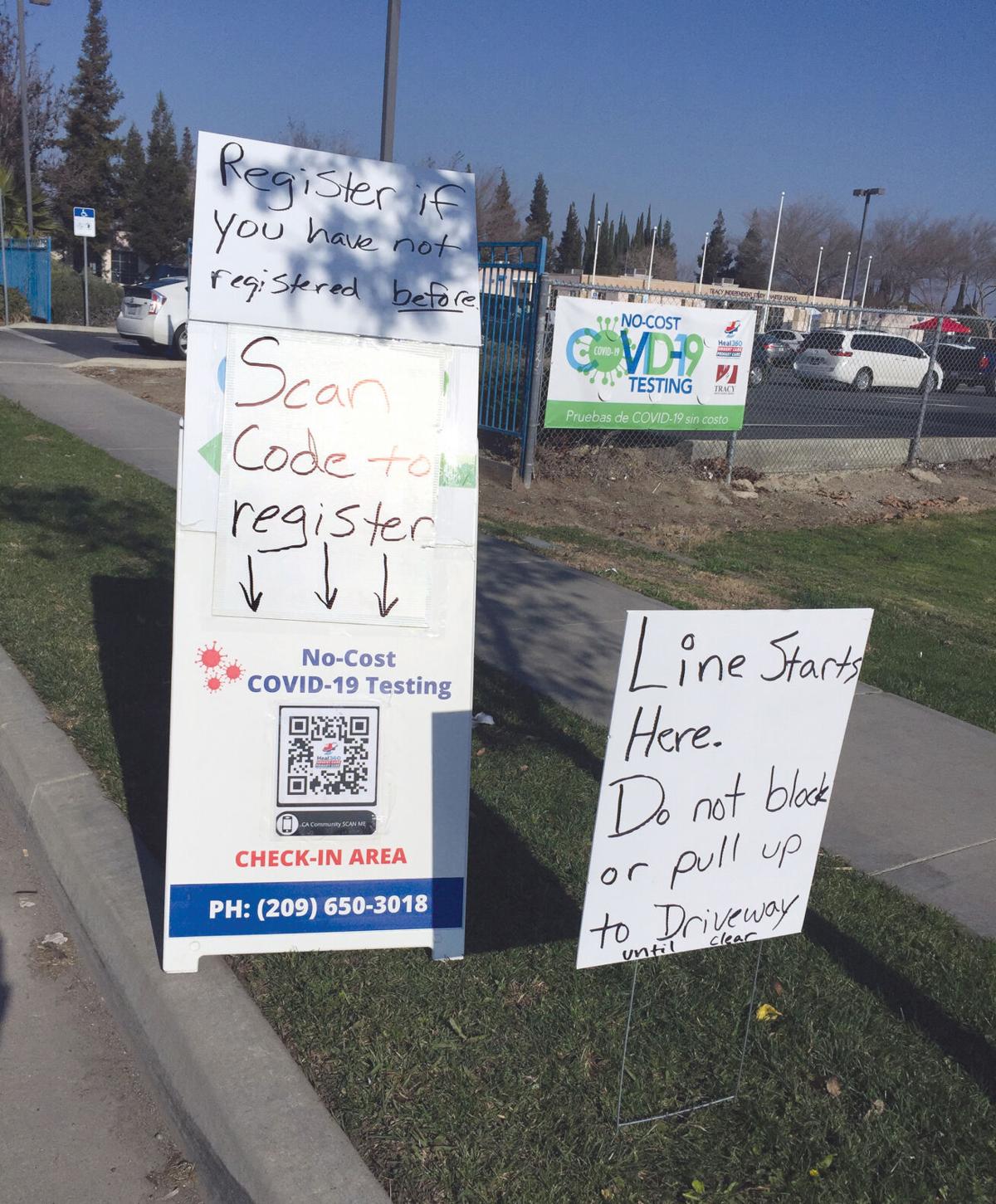 Jessica Aguilar, a nurse with Heal 360, documents information on COVID-19 tests done at the Tracy Independent Study Charter School on Corral Hollow Road. She estimates that she and her staff do between 900 and 1,200 tests every day.

Medical assistant Rachele Ruiz collects a nasal swab from fellow medical assistant Kaylah Ricks Van Ness at the Tracy Independent Study Charter School on Corral Hollow Road. The staff from Heal 360 test themselves a couple times a week as they also test 900 to 1,200 people for COVID-19 every day.

The return to school for 2022 has schools contending with the spike in COVID-19 cases, especially in athletics.

San Joaquin County is seeing a new 7-day average of more than 157 cases per-day, compared to just over 90 per-day a year ago when the number of new infections previously peaked. County data show that about 20% of the case rate is in the under-18 age groups.

Zachary Boswell, Tracy Unified School District’s director of curriculum and accountability, and the district’s lead official for COVID-19 response, said that the start of 2022 also saw a jump in student absences as more kids test positive for COVID.

“We’ve been checking our numbers daily. We typically have a 95% attendance rate, give or take, and we’re probably closer to 85% right now, just looking at the data from the last week or so,” Boswell said.

“That number is a little bit hard to pin down day to day,” he added, noting that reporting and verification of absences can take a few days or as long as a week or two, but the increase is significant in any event.

“That’s 10% more students than we normally miss. It’s not as drastic as it has been in other school districts, but it’s still a lot of students out.”

The spike in positive cases has affected school athletics. At Mountain House High, Athletic Director Guadalupe Galindo noted that all indoor sports, including basketball and wrestling, were cancelled this week and will be rescheduled.

Kimball High Athletic Director Joe Lawrence said that some basketball games have been cancelled, but teams are able to keep active if enough players can be brought up from freshman and junior varsity teams to put a complete varsity team on the court. He noted that the California Interscholastic Federation allow athletes to move between levels during the season.

“If we have enough kids that can play, they’ll continue playing,” he said. “They just can’t play two games in one night. It gives us room to move kids up and down if we need to in order to get games in.

“We want to try to get in every game that we can. The main focus is to play at least all of the varsity games, because that has playoff implications. Right now, it looks like, except for two or three games within the league, everyone has rescheduled their games.”

Tracy High Athletic Director Matt Shrout said his school’s teams have also cancelled several individual events. In many cases a team will quarantine individual players, but the rest of the team can continue to practice and compete as long as everyone else tests negative. Athletes are tested at least once a week.

Shrout noted that girls basketball did take a week off because of positive tests. During the winter break the team competed at the Tracy Breakfast Lions/Tom Hawkins Girls Basketball Tournament, where three teams withdrew from the tournament after their players tested positive, and another team withdrew after playing against teams whose players had tested positive.

In addition to regular testing, student-athletes are also tested if they appear to be sick, and it often turns out they have something other than COVID, Shrout said, adding that those who test positive often are asymptomatic and did not appear sick, or they recover quickly.

“Most of this age group, their symptoms are little to none. It starts with, they don’t feel right, and within a day or two they’re fine.”

Boswell noted that the district’s policy is to quarantine for 10 days, but someone who is vaccinated and tests negative after five days of quarantine can return once they have a negative test.

Boswell said the district’s objective is to keep classrooms and school functions open.

“Everybody is making it work, but it has been significant. Office staff, teachers, classified. Some of it is positive tests, so stay home. Some of it is direct contact. Some of it is, ‘I have symptoms and we want to be safe,’” he said.

The district has set up three testing sites with Heal 360, one at the Tracy Independent Study Charter School on Corral Hollow Road, just north of Lowell Avenue where the TUSD offices and West High are located. That one is open from 7 a.m. to 6 p.m. Monday through Friday, and Jessica Aguilar, the Heal 360 nurse running the site on Wednesday, said about 900 to 1,200 people come through there each day.

She said tests can be processed within 15 to 20 minutes, though folks generally learn their test results by the end of the day. People can also get tested at Tracy High and Kimball High from 9 a.m. to 5 p.m. Monday through Friday.

Boswell noted that while the testing sites were set up for students and staff, the public is also welcome to visit the sites for free tests.

“That’s what we’re trying to offer to keep our families safe. Our staff and students do get priority access,” he said. “The wait times will be a bit longer for the public than for staff or students.”

Information on the testing sites, and an upcoming vaccination clinic on Feb. 11 at Central School, is available at the district’s COVID hotline number, (209) 832-6785.