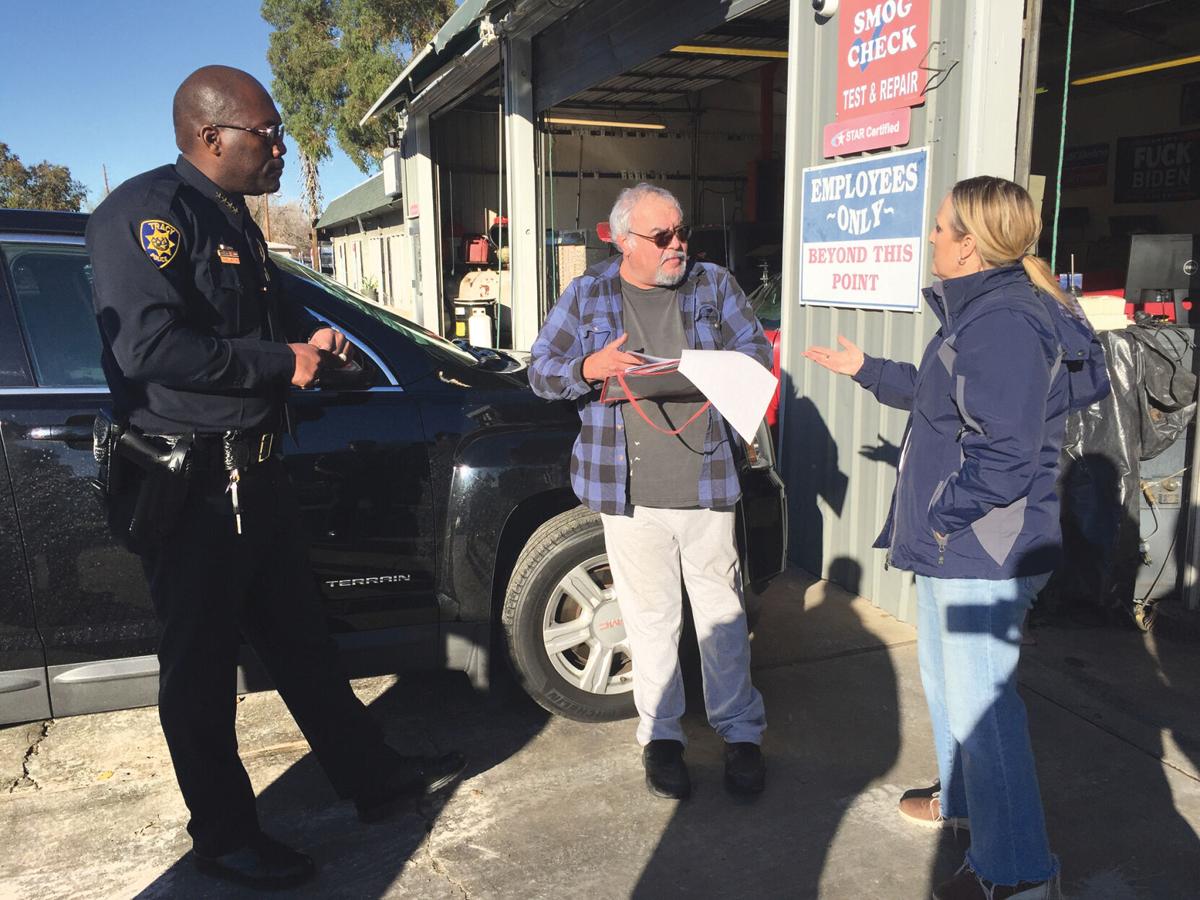 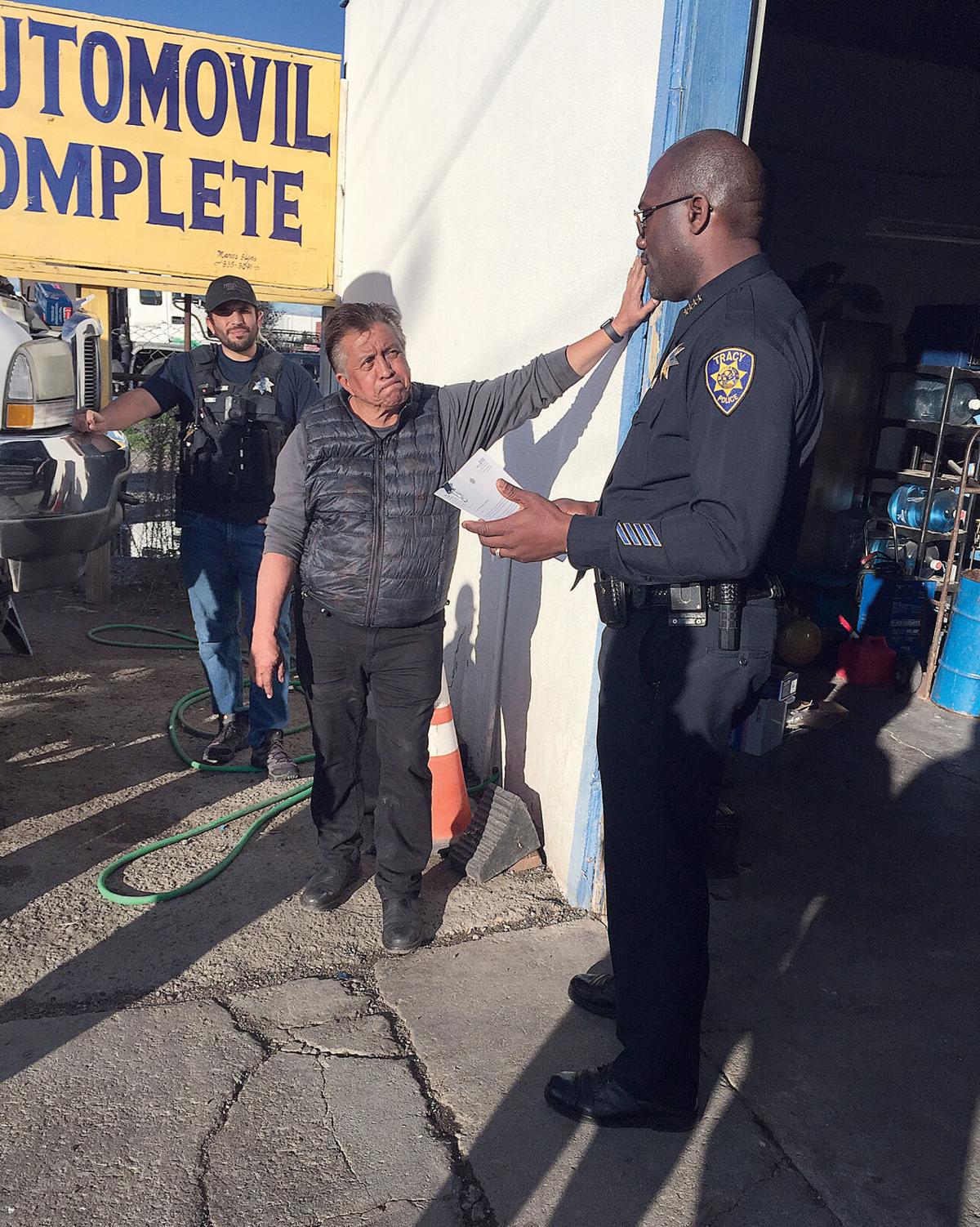 Tracy Police Chief Sekou Millington chats with Edgar Orellana, owner of Mr Ed’s-S&J’s Auto Care on Darrigo Drive on Tuesday, reminding him of the state and county laws that pertain to collection and recycling of catalytic converters. 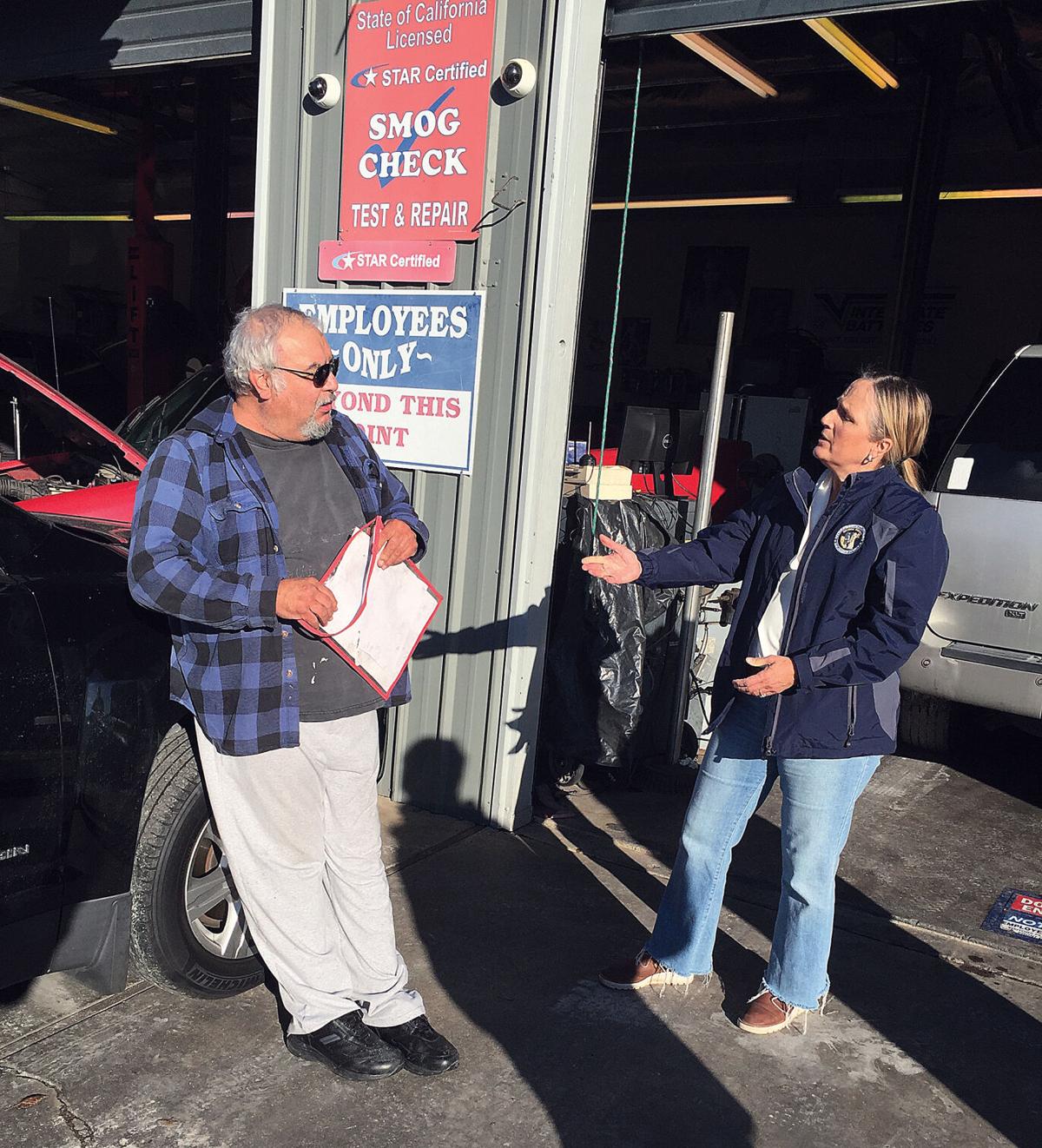 Tracy Police Chief Sekou Millington chats with Edgar Orellana, owner of Mr Ed’s-S&J’s Auto Care on Darrigo Drive on Tuesday, reminding him of the state and county laws that pertain to collection and recycling of catalytic converters.

A contingent of law enforcement officials made the rounds of local muffler shops and auto parts recyclers on Tuesday as part of their response to a rise in catalytic converter thefts.

The group included Tracy Police Chief Sekou Millington and San Joaquin County District Atttorney Tori Verber Salazer, spreading the message that they need help from the auto repair and recycling community to bring the plague of thefts under control.

Millington said he recently ran the numbers, which show the number of catalytic converter thefts nearly doubling over last year. The Tracy Police Department recorded 165 such thefts in 2020, and with only a couple weeks left in 2021 the number of thefts this year is 246.

He attributes the rise in thefts not just to the value of the converters and the precious metals inside of them, but also to the methods that thieves have developed to collect the converters from cars.

“It’s a quick theft. They can get in under a car in a minute, seriously,” Millington said. “A lookout, driver, a cutter, and someone working the jack. It’s very quick and oftentimes in the dark of night.”

He added that the quickness of the thefts makes thieves hard to catch, and because police believe most of them come from out of town, they are likely out of town by the time police arrive to investigate the theft. He noted that is also difficult to identify suspects that come in from other cities even if they’re recorded on home security video.

The line of defense that law enforcement is looking at through this initiative is to make it tougher for thieves to cash in on stolen catalytic converters. That includes a long list of requirements on auto shop owners and auto recyclers to document everything they can about every catalytic converter they receive, as well as information on the people who bring them in.

During their visits to shops on Tuesday, Millington and Verber Salazar handed out a list of county ordinances, plus parts of the California Business and Professions Code that spell out these recording requirements, as well as a brochure that summarizes these laws. Violations are mostly listed as misdemeanors, but the laws also include the California Penal Code section that addresses receiving of stolen property, which can result in felony charges.

During their visits, they met with shop owners who said they are aware of the laws and reporting requirements for receiving catalytic converters, including taking thumbprints and photos of sellers and recording their identification information. The county ordinances include a 14-day waiting period before an auto shop that receives a converter can sell it to a recycler that can recover the precious metals.

Joe Graw, owner of Joe’s Smog Shack on East 10th Street, said he is not only aware of the laws, he is doing what he can to make it tougher for thieves to cash in on stolen converters. For the past two months he has offered to etch the license plate and vehicle identification numbers on customers converters.

“That way if (the thieves) get caught, there’s a license plate number, they can go back to the guy and say, hey, here’s your catalytic converter. We can put in back on, instead of having to have them buy another $2,000 cat,” he said.

“It’s very expensive for the customer, but when they get these guys they ought to be made to pay for them somehow, restitution, even jail time, something like that.”

Graw said that just at his shop in the past three months he has replaced catalytic converters for 20 vehicles, with raised Dodge and Toyota trucks being popular targets of the thieves because the converters are so easy to access.

They’re also expensive, starting at about $1,800 for converters he installs on Toyota trucks.

The value of the converters is based on the price of the precious metals inside the device that that help convert toxic car exhaust into harmless carbon dioxide, nitrogen and water vapor. Recent quotes show the price of platinum at $942 per-ounce, palladium goes for $1,604 per-ounce, and rhodium goes for $11,600 per-ounce

“It takes about six of them to get you that ounce, but as you can see it’s lucrative,” Verber Salazar said.

She added that requirements like the two-week waiting period before a shop can recycle a converter gives police investigating a theft time to check local shops to see if anyone has tried to cash in on stolen converters.

“We looked at different solutions to get people in the community to engage with us, because we can’t be at every vehicle. We can’t have an officer posted at every vehicle, so it’s got to be a community-solution driven opportunity for us,” she said.

Verber Salazar added that etching of converters will give law enforcement data on where converters are stolen from and where the thieves likely operate out of as they look for recyclers that will take them.

“We need to remind everybody that this is a community-based solution. We need everybody working together. We can take the larger-scale of criminal behavior and reduce it down to a much smaller, more manageable scale for us.”