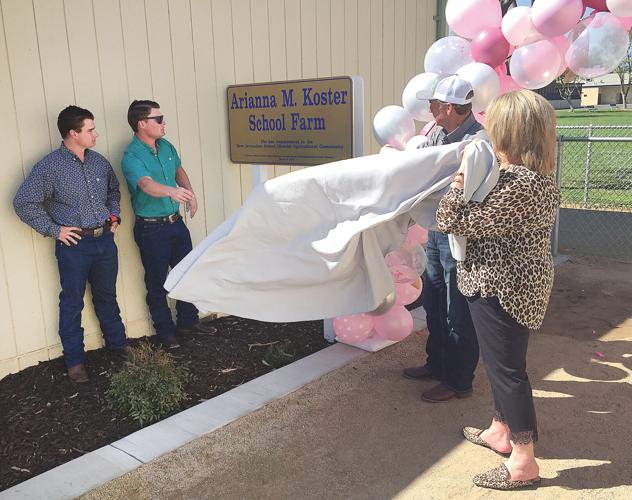 Arianna Koster’s family, including, from left, brothers Zachary and Jacob, father Bill and mother Celeste, unveiled the sign identifying the school farm at New Jerusalem School as the Arianna M. Koster School Farm during a dedication in April. 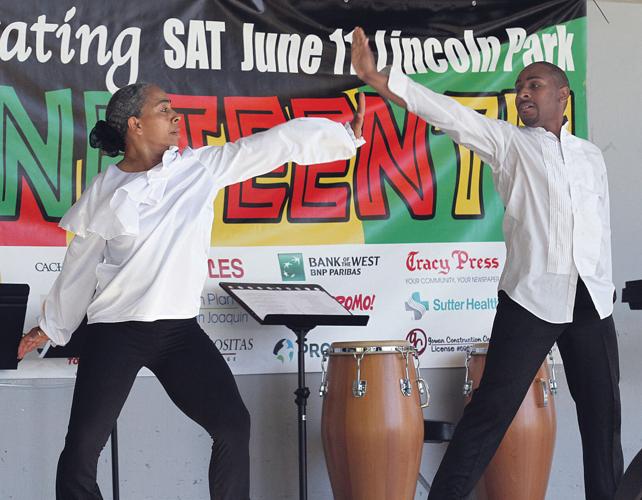 Dawn James and Adam Green perform a praise dance during the Gospel Hour portion of the Juneteenth celebration in June at Lincoln Park. 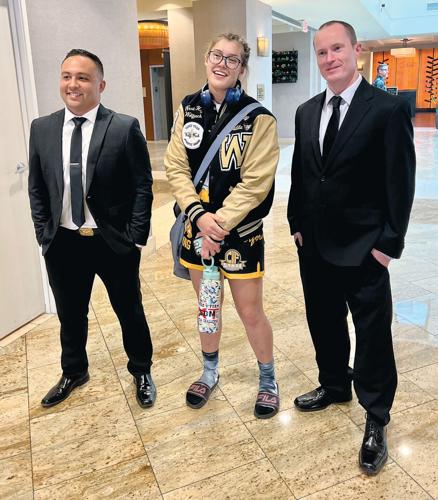 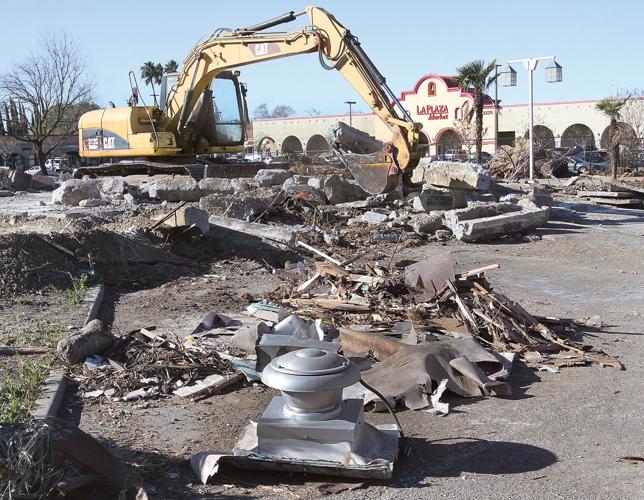 An excavator moves concrete debris left from the demolition of the Long John Silver’s restaurant building at 3379 N. Tracy Boulevard in the Tracy Corners shopping center in February. The building had been vacant since it closed in 2007. 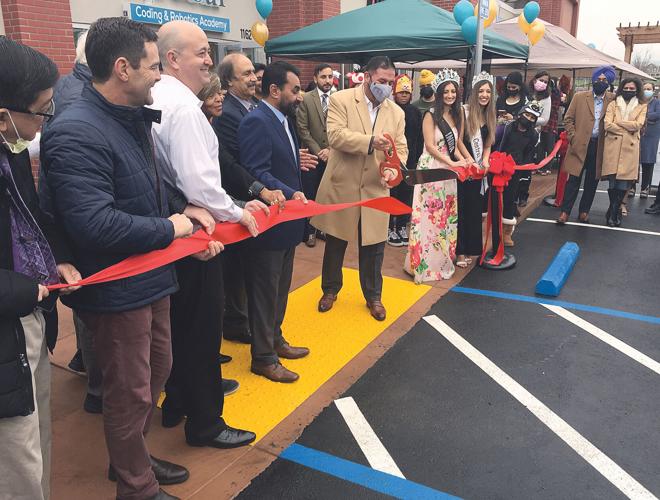 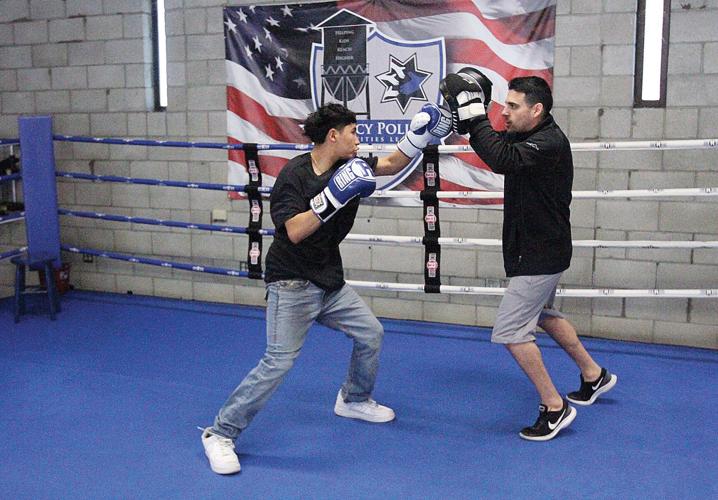 Tony Palafox (left) works out in the boxing ring with coach Guillermo Aragon in May as the Tracy Police Activities League had a grand reopening for their gym after a two-year COVID closure.

Following are some of the highlights from the first half of 2022. The second half of the year will be featured in the Jan. 6 edition.

Plans have been announced for a $20 million renovation of Ritter Family Ball Park on Bessie Avenue just south of Grant Line Road. It’s one of the city’s oldest parks and occupies 11 acres donated by Carlton E. “Pete” Ritter and Margaret Ritter in 1947, and had the only city-owned baseball and softball fields prior to the opening of Tracy Sports Complex in 11th Street in 2002.

COVID-19 infections are seeing a new wintertime peak at the start of the new year at nearly 28,700 new cases per-day statewide and nearly 550 per-day in San Joaquin County.

The opening of Cordes Village Plaza in Mountain House signals a big step in the commercial and retail growth in the community. Businesses include restaurants, retail and service-oriented storefronts.

The Tracy Chamber of Commerce announced its Community Recognition Awards, including citizens of the year Mike Souza and Param Gill. Souza is a real estate developer involved with the Tracy Hills project, and also serves on numerous volunteer boards, and Gill, along with her husband Jivtesh, is a business owner and also a volunteer on the boards of community groups.

Volunteers spread out around town to take a count of the unsheltered homeless population in Tracy. The San Joaquin County Continuum of Care, United Way, Tracy Community Connections Center and City of Tracy sought to get detailed data on the city’s homeless population.

A long-vacant building on the corner of Tracy Boulevard and Clover Road was demolished. What had once been the site of Long John Silver’s restaurant will become the site of a 7-Eleven, complete with a gas station.

Tracy Hills residents recently learned that Corral Hollow School, the first school in the new development, has been delayed because of rising construction costs. The projected cost of about $54.75 million is causing Jefferson School District to reconsider the design of the school.

The Tracy City Council has endorsed the latest version of the Westside Specific Plan, 535 acres on the southwest corner of 11th Street and Lammers Road that will be developed with a mix of residential and commercial projects, plus a 35-acre hospital site on Lammers Road across from Kimball High School.

California Health and Human Services Secretary Mark Ghaly announced that children no longer will be required to wear face masks at school, signaling a continued decline in the number and severity of COVID-19 cases.

West High junior Kalila Shrive has won the California Interscholastic Federation state wrestling championship in the 160-pound class, finishing her season at 34-1. She was also the Sac-Joaquin Section champion and the second girl ever from West High to win a state wrestling title.

The Kimball High girls soccer team won the California Interscholastic Federation NorCal Division 5 championship, a 1-0 win at Sutter High. The Jaguars made the state tournament after placing third in the Valley Oak League and as runner-up in the Sac-Joaquin Section Division 3.

A fifth-grader at Hirsch School jumped into action to save the life of another student. Chris Harris had learned the Heimlich maneuver from his dad, and used it at school when he saw classmate Drew Marvin choking on a grape.

Former Mayor Mike Maciel died in a car crash at the intersection of Highway 132 and Koster Road. Maciel had served with the Tracy Police Department for 23 years and for eight years on the Tracy City Council, four of them as mayor.

New Jerusalem School opened an agricultural center for students in honor of Arianna Koster, who mentored many young folks in 4H and FFA prior to her death in a tractor accident in 2008.

The Tracy City Council approved the first increase in garbage collection rates in 10 years, which will nearly double what people pay for waste collection over the next 5 years. The plan also includes new methods for sorting waste.

Doctor’s Choice, a cannabis dispensary on Grant Line Road and the first to be approved under new recreational use rules authorized by 2016’s Proposition 64, gained Tracy Planning Commission approval.

The Tracy City Council approved a contract to prepare a city-owned site on Arbor Avenue for a new homeless shelter. Additional contracts will be required for shelter construction.

Noel Colina, 62, of Tracy, has completed his eighth Boston Marathon, completing the 26.2-mile course in 3 hours, 43 minutes and 49 seconds. He also ran a virtual Boston Marathon in 2020.

One of three new parks in Tracy Hills was named for Raymond P. Morelos Jr., a former Tracy City Council member and founder of the Southside Community Organization.

Work has started on Phase 1E of Legacy Fields, meaning that completion of the 72-acre first phase of the sports complex at the north end of town is likely by the end of the year.

The Tracy Police Activities League has reopened its boxing gym serving local youths on West Street. The gym was closed for 2 years because of COVID-19 restrictions.

The California Court of Appeal, Third Appellate District, ruled that part of a development agreement for the Ellis development is invalid. The city of Tracy and Surland Communities LLC have an agreement dating back to 2013 that gives Surland priority status for the Ellis project, but a 2018 amendment, ruled invalid, could have allowed Surland to take out more building permits in addition to the Ellis project.

The Boys and Girls Club of Tracy has announced plans to double in size, with new sites to come at Bohn, Kelly, Hirsch, Freiler elementary schools, Williams Middle School and West High School.

People celebrated Juneteenth in Lincoln Park. The Tracy African-American Association hosts the event to commemorate the end of slavery in America.

The Tracy Holy Ghost Festa was celebrated at St. Bernard’s Catholic Church and IPFES Hall, honoring the Portuguese heritage of many Tracy residents.

San Francisco 49er Super Bowl star Keena Turner hosted his 27th annual golf tournament, one of the big benefits of the year for the Boys and Girls Club of Tracy.