Tracy police officers gather at the Valero gas station on 11th Street after a man was arrested at the intersection of 12th and F streets in connection with a shooting in downtown Tracy. 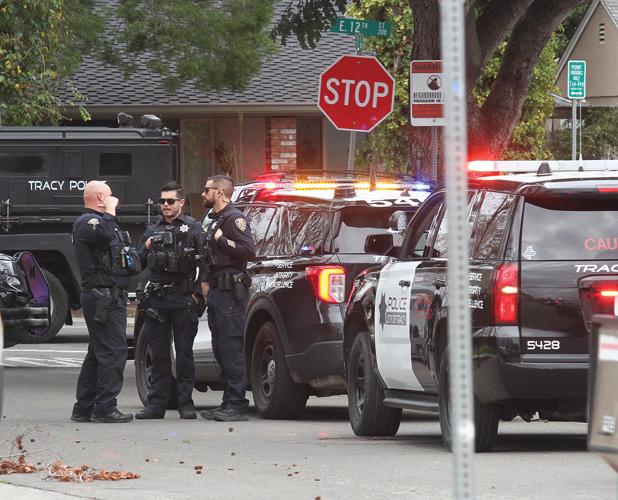 Tracy police officers took a man into custody in the intersection of 12th and F streets in connection with a shooting in downtown Tracy.

One man is in police custody after a shooting a handgun in Central Tracy Thursday afternoon.

Officers arriving were initially told one person was struck by gunfire but after further investigation determined the man had opened fire at an acquaintance but did not actually hit him.

Police were told the suspect was last seen running north in the direction of 11th Street from the shooting scene. Additional callers told police the man was firing the gun as he ran.

Tracy High School was briefly put on lockdown when the suspect was reported to be running on 12th Street heading east toward the school.

Officers from the Special Enforcement Team and the General Investigations Bureau found the suspect in the intersection of 12th and F streets a few minutes later at 1:17 p.m. and he was taken into custody after brief struggle with the officers.

Heefner said the investigation was just beginning and she could not say what the motive for the shooting was, but said officers did recover the handgun he used. No one was reported injured in the shooting and there are no other suspects.