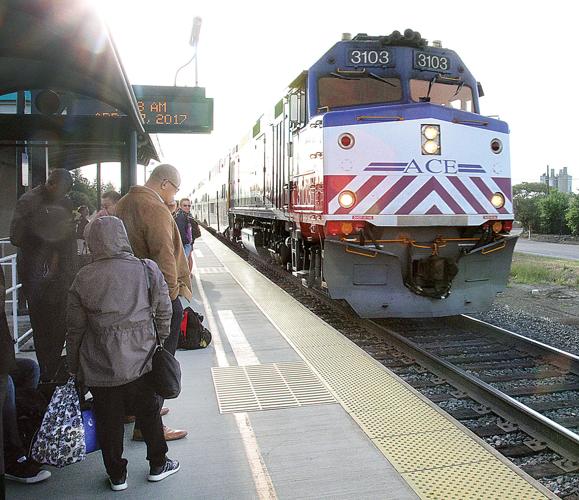 Riders wait to board the Altamont Corridor Express No. 5 train as it arrives at the Tracy station on Linne Road on Thursday morning.

Riders wait to board the Altamont Corridor Express No. 5 train as it arrives at the Tracy station on Linne Road on Thursday morning.

The San Joaquin Regional Rail Commission has announced an environmental report on plans to expand Altamont Corridor Express train service and a public meeting in Tracy late this month.

People have until July 31 to comment on the report, which was released Wednesday. It was prepared by ICF business management consultants of San Francisco and details the expected impact of extending train service from Lathrop to Modesto and Merced, adding stations in Tracy and River Islands, adding more trains to the schedule and possibly realigning the tracks that lead to and through the Altamont Pass. The expansion plan is known as ACEforward.

“The ultimate build concept for the (Altamont Corridor Rail Project) included a fully grade-separated, independently owned (right of way) for electrified service from Stockton to San Jose,” the report states. “While the ultimate build concept of the ACRP remains a long-term potential, SJRRC has identified shorter-term goals to modernize the existing ACE service that would result in faster intercity and commuter train service and could establish a connection between Stockton, Modesto, Ceres, Turlock, Merced and San Jose within the next 10 years.”

The report identifies a need for more rail service, anticipating 5.1 percent population growth in San Joaquin County by 2020 and 8.8 percent expansion in the number of jobs in Santa Clara County in that same period. It found that westbound Interstate 580 over the Altamont is the eighth most delayed stretch of road in the greater Bay Area during morning commute hours.

The rail commission also proposes to improve tracks owned by Union Pacific Railroad to handle expanded service and increase the reliability of its trains. The report acknowledges that the commission is contemplating a connection between ACE and BART as a different plan but does not offer any conclusions about how that planning might affect ACEforward.

The report also details the considerations that would go into adding a station in west Tracy to serve Mountain House travelers and new residents in Tracy Hills and other developments; adding a stop at the downtown Tracy Transit Station; and building a station in River Islands between Lathrop and Tracy.

ACEforward also proposes to add two trains in each direction a day, going from four round trips to six.

The report concludes that if the rail commission does nothing, ridership will increase from 1.3 million annual riders to 1.5 million by 2020. If the improvements are made without the proposed extension to Modesto, that number will rise to between 1.9 million and 2.2 million riders a year. With a Modesto connection, the rail commission expects between 2.2 million and 2.3 million riders to use ACE each year by 2020.

The consultants identified six issues that may be controversial: safety and security, greenhouse gas emissions, noise, impacts on plants and animals, impacts on some historic places, and the chance that some people might prefer to explore other options. The consultants also identified seven issues that still need to be resolved, including funding. The state Senate added $400 million for ACEforward in the recent transportation bill that will raise the tax on a gallon of gas from 18 to 30 cents, but more money may be needed to fully execute the expansion.

The rail commission is holding six meetings about the ACEforward draft EIR, including one at Tracy City Hall from 5:30 to 8:30 p.m. June 29. A copy of the EIR is available at the Tracy Branch Library, 20 E. Eaton Ave., at the Mountain House Branch Library, 250 E. Main St., or online at www.aceforward.com.

This is the executive summary for the San Joaquin Regional Rail Commission draft environmental impact report for the ACE Forward project. Read…

Sam Matthews wants to make sure people have a chance to comment on the draft environmental impact report for ACE train expansion.