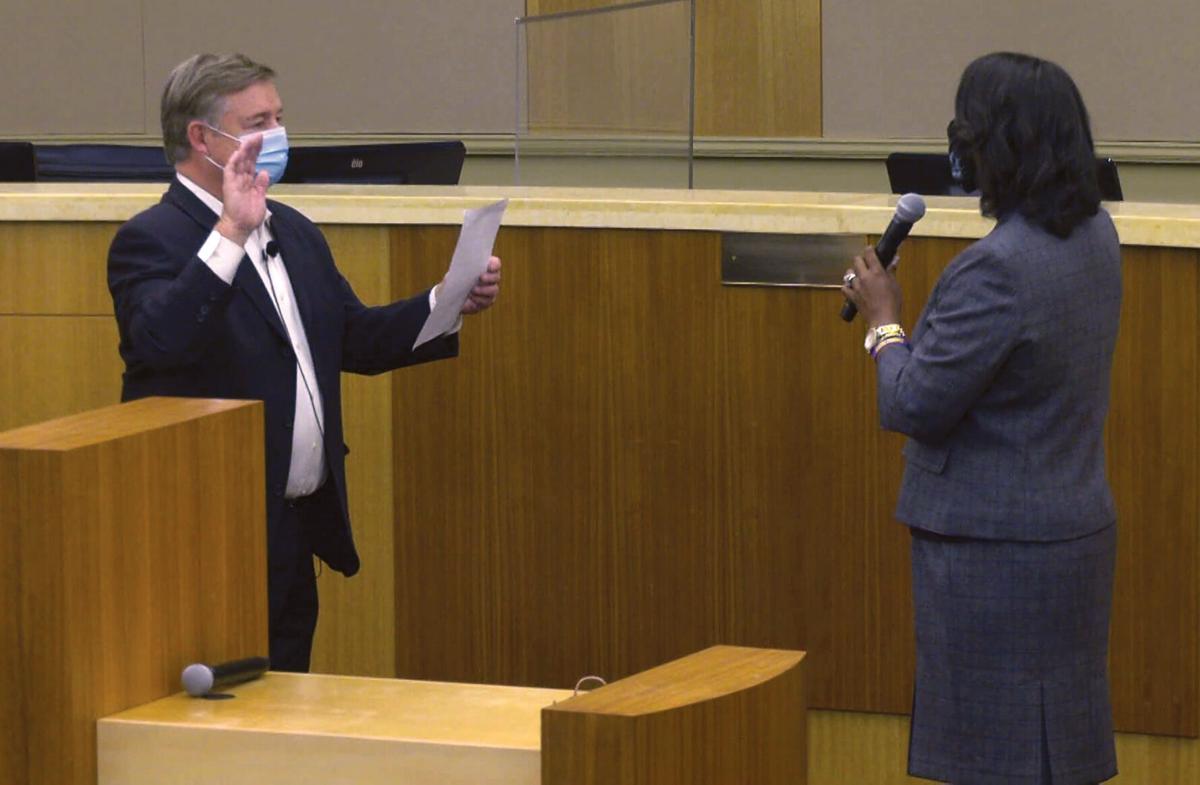 Former mayor Brent Ives administers the oath to Nancy Young as she as sworn in as mayor of Tracy. 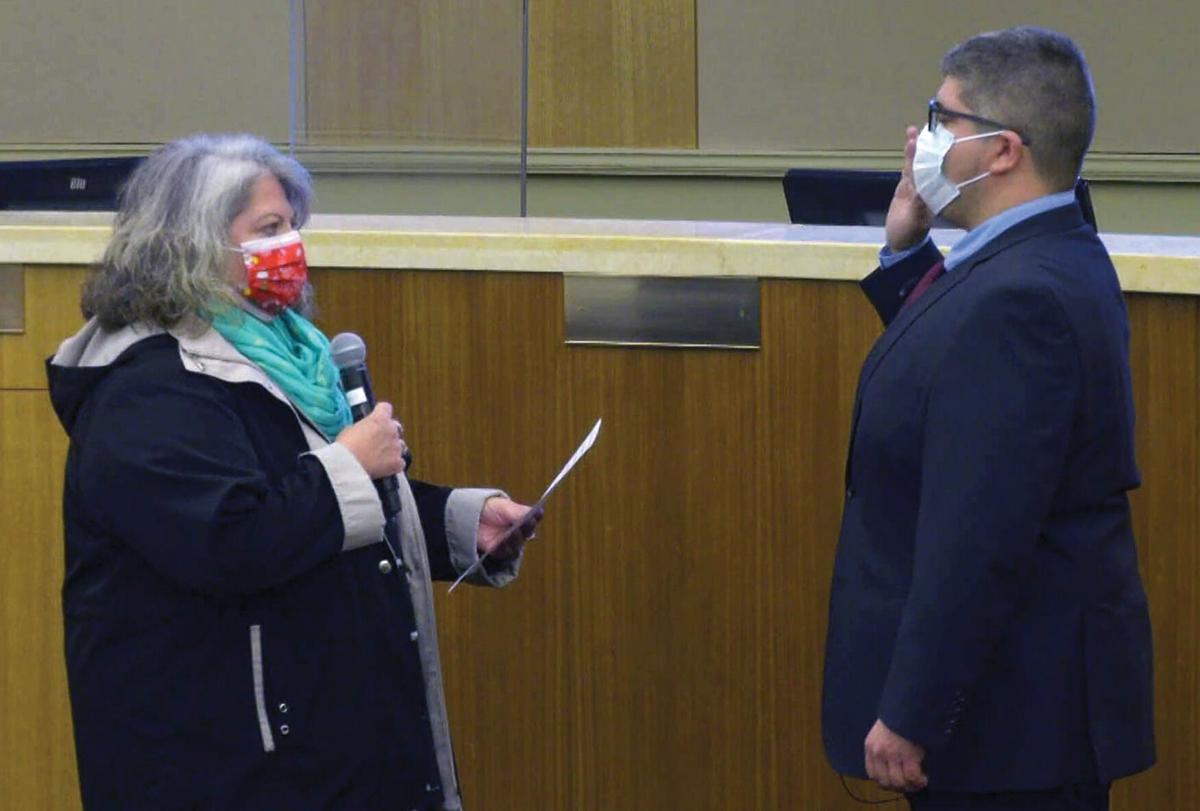 Maricela Morelos-Bedolla swears in her son Mateo Bedolla as a Tracy City Councilmember on Tuesday. 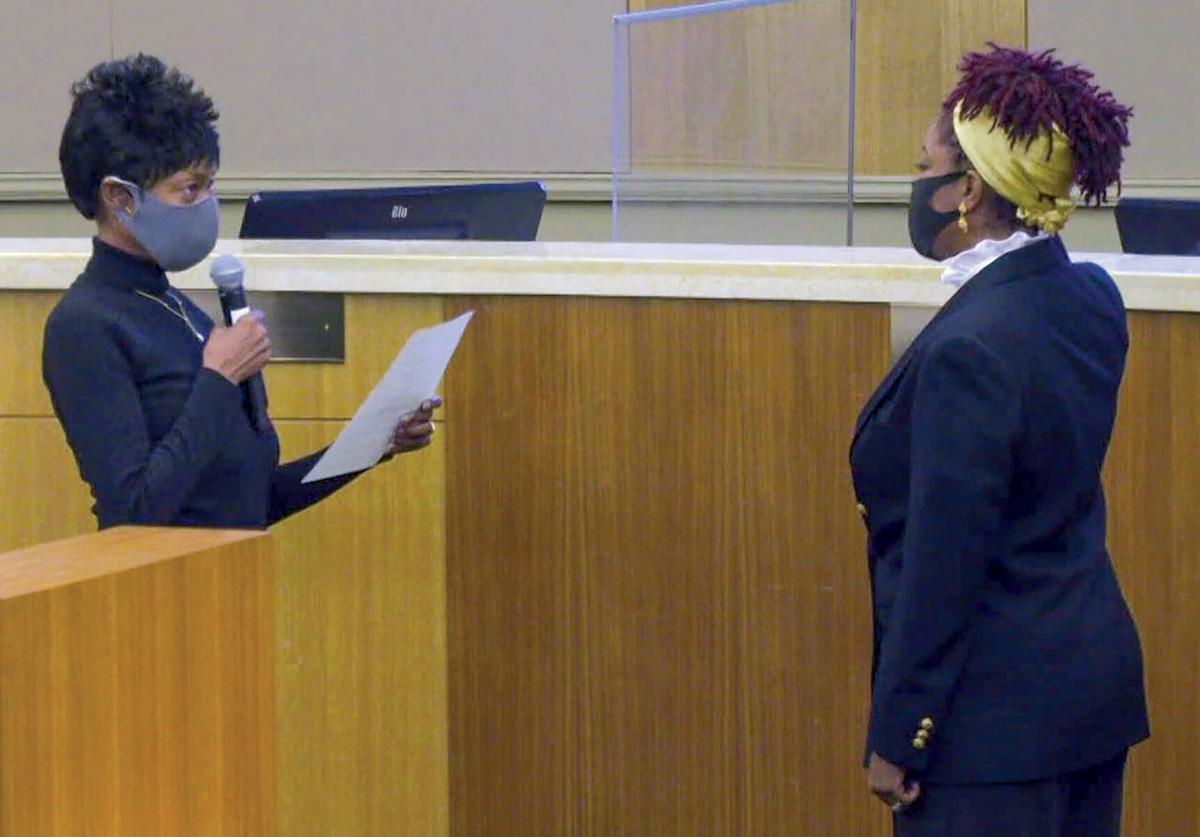 Mucie Lackey (left) reads the oath of office to her daughter Eleassia Davis as she is sworn in as a Tracy City Councilmember on Tuesday. 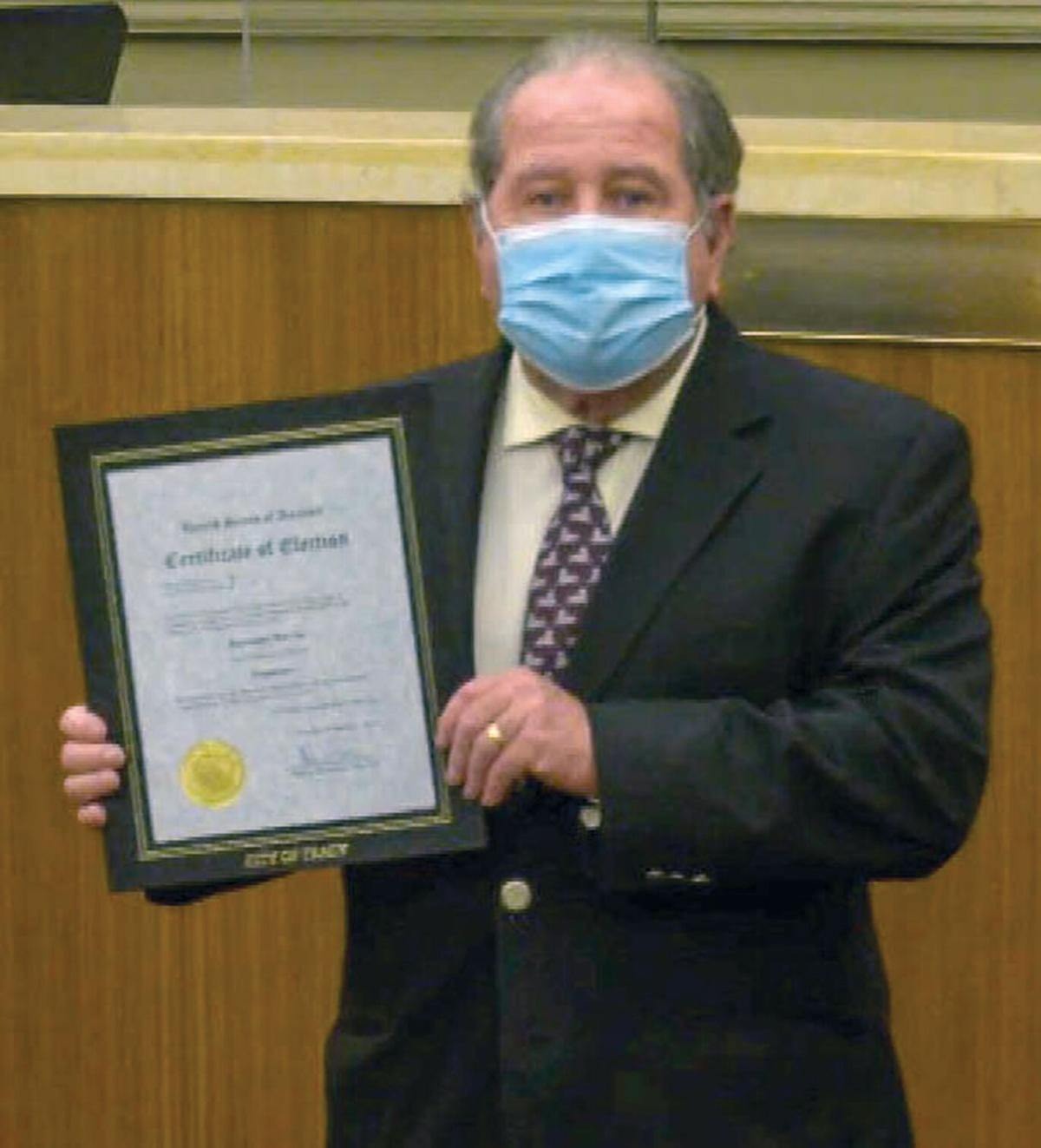 Ray McCray ran unopposed and was sworn in as city treasurer Tuesday night.

Former mayor Brent Ives administers the oath to Nancy Young as she as sworn in as mayor of Tracy.

Maricela Morelos-Bedolla swears in her son Mateo Bedolla as a Tracy City Councilmember on Tuesday.

Mucie Lackey (left) reads the oath of office to her daughter Eleassia Davis as she is sworn in as a Tracy City Councilmember on Tuesday.

Ray McCray ran unopposed and was sworn in as city treasurer Tuesday night.

The new Tracy City Council had its first meeting on Tuesday, with the city’s new mayor, Nancy Young, taking charge and the two newest councilmembers taking their respective seats.

On the council’s first formal action, appointing a mayor pro tempore for 2021 and 2022, the council could not reach consensus. The council appointed Veronica Vargas, the longest-serving councilmember after Young, to the 2-year position on a 3-0-2 vote, with the newest members, Mateo Bedolla and Eleassia Davis, abstaining on the vote.

In the leadup to the vote the council heard public comments, including endorsements for Davis, Bedolla and Councilman Dan Arriola. When it came time for the council to make recommendations, Arriola recommended Vargas, citing her six years on the council as her qualification to fill the role of mayor if necessary.

“I think that with the things that are going in our city now, there are so many moving parts and so much to catch up and learn about I think it’s really important that we have someone with experience, the experience to step into that role on a moment’s notice, to know what’s going on with the budget and different subcommittees and a multitude of things going on with our city,” Arriola said.

Davis did not make a recommendation, and Bedolla said he would take on the role of mayor pro-tem.

“I would serve in the vice mayor position with all of the respect that it deserves, and I am prepared to hit the ground running. I have the experience. I have the know-how, and most important I’m here to listen to residents,” Bedolla said. “I would be honored if I could get the support from a fellow councilmember to be nominated for vice mayor.”

Young recommended Vargas, also citing her experience on the council.

Before Vargas had a chance to make a recommendation, Young made the motion that Vargas be the mayor pro-tempore and Arriola seconded the motion. Both Bedolla and Davis abstained, and Vargas voted in favor.

“I’m honored with the vote of confidence, Mayor, and I am humbled and I will accept the nomination,” Vargas said.

It was the final part of the transition to the new council. It began with former Mayor Robert Rickman, who has just been elected as the Fifth District Supervisor for San Joaquin County, passing the gavel to Young. Young then acknowledged outgoing Councilwoman Rhodesia Ransom for her four years on the City Council, and her experience as a planning commissioner prior to that.

Ransom leaves the council after opting to run for San Joaquin County Supervisor. After a contentious campaign Rickman won it with 34,180 votes to Ransom’s 33,470 votes, a margin of 710 votes, just over 1%.

Young mentioned that she and Ransom met 10 years ago when both were applying for a seat on the planning commission. Since then they have also worked together mentoring youths in town. Young also highlighted Ransom’s efforts to address homelessness in town.

“I’ve worked with you a lot and I’ve seen a lot behind the scenes, in front of the scenes. As all people, everybody doesn’t agree on everything, but we’ve become good friends, and I really appreciate that, even when we don’t agree on the dais,” Young said.

Ransom said that her 11 years of service to the city, starting with the planning commission and continuing with four years on the council, was a natural path for her after making Tracy her home.

“A lot of people brag about being born and raised here, but I brag the fact that I chose to make Tracy my home,” Ransom said.

She also elaborated on how her grandmother inspired her through her missionary work, exemplifying the spirit of service.

“It wasn’t about power. It’s about responsibility. To whom much is given, much is required and expected,” she said. Ransom also said she draws inspiration from others who are passionate about their community.

Rickman moves on to the supervisor role after 10 years on the council, four of them as mayor.

“It’s been the honor of my life to be your mayor,” he said, adding that as a third-generation Tracyite he has always valued living in a community where public events like Tracy High football games and Fourth of July parades draw people together.

He said that while much has changed as the city grew from 15,000 residents when he was growing up to more than 94,000 today he still sees that character of the community that he grew up in.

Then came the swearing-in of elected officials, including city treasurer Ray McCray. McCray was appointed as city treasurer in 1995, elected in 1996 and has been re-elected every four years since then. As city treasurer he manages the city’s investment portfolio, which adds up to more than $326 million.

Young also commented on her historic moment as the first African-American to become Mayor of Tracy. She acknowledged racism in the city’s history, and also talked about how she has looked to previous African-American Councilwoman Evelyn Tolbert as a mentor.

Young described how the city already has initiatives set in motion by the previous council, which will continue to be priorities for the new council, including use of the Measure V sales tax, creation of a new aquatics center, completion of Legacy Fields, implementation of the city’s equity and empowerment initiative and bringing the Valley Link commuter rail line to town.

She also addressed the new council members regarding how she will incorporated their ideas.

“My No. 1 priority is to foster a council that is all about Team Tracy. I really want us to work together as a team,” Young said. “You all have your different unique things that you bring to the game, and I’m just hoping to draw on all of your strengths and build us together as one cohesive unit.”