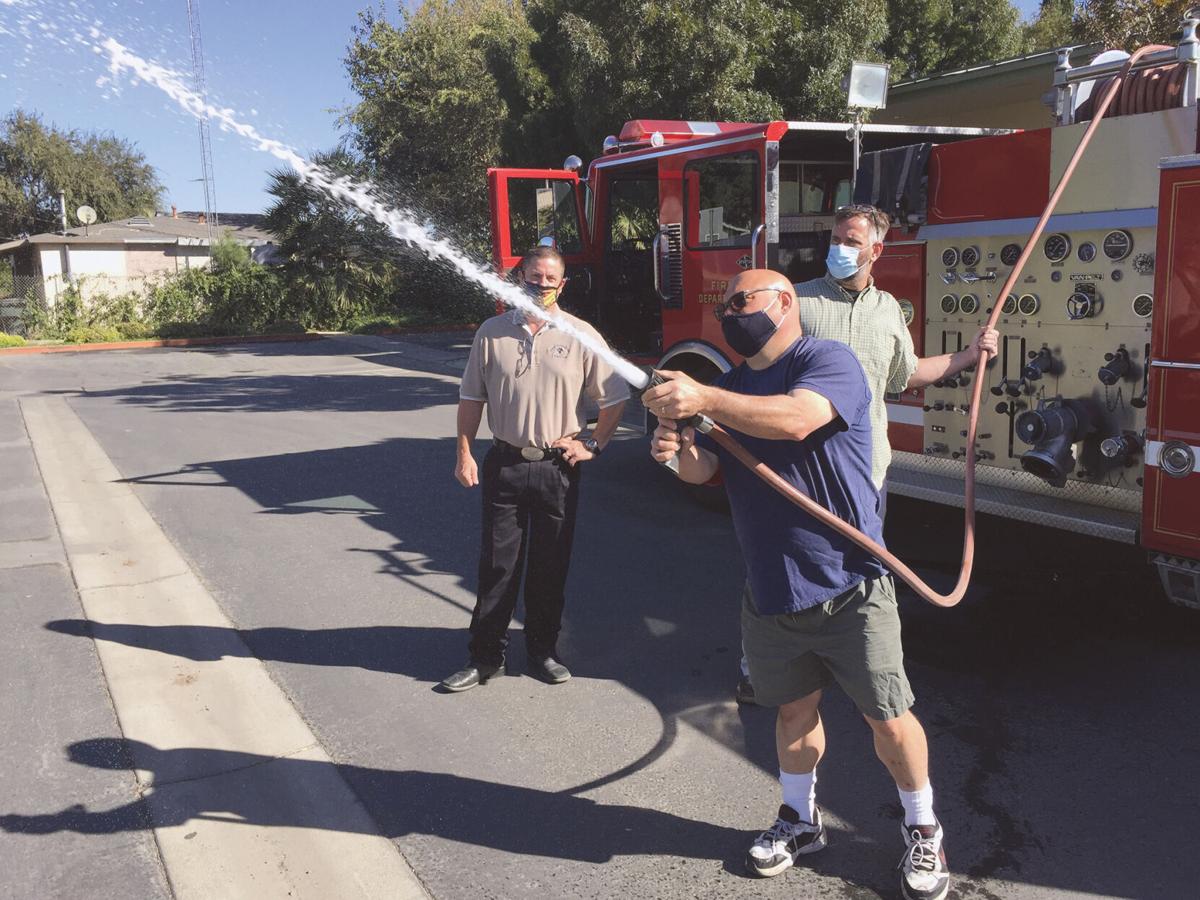 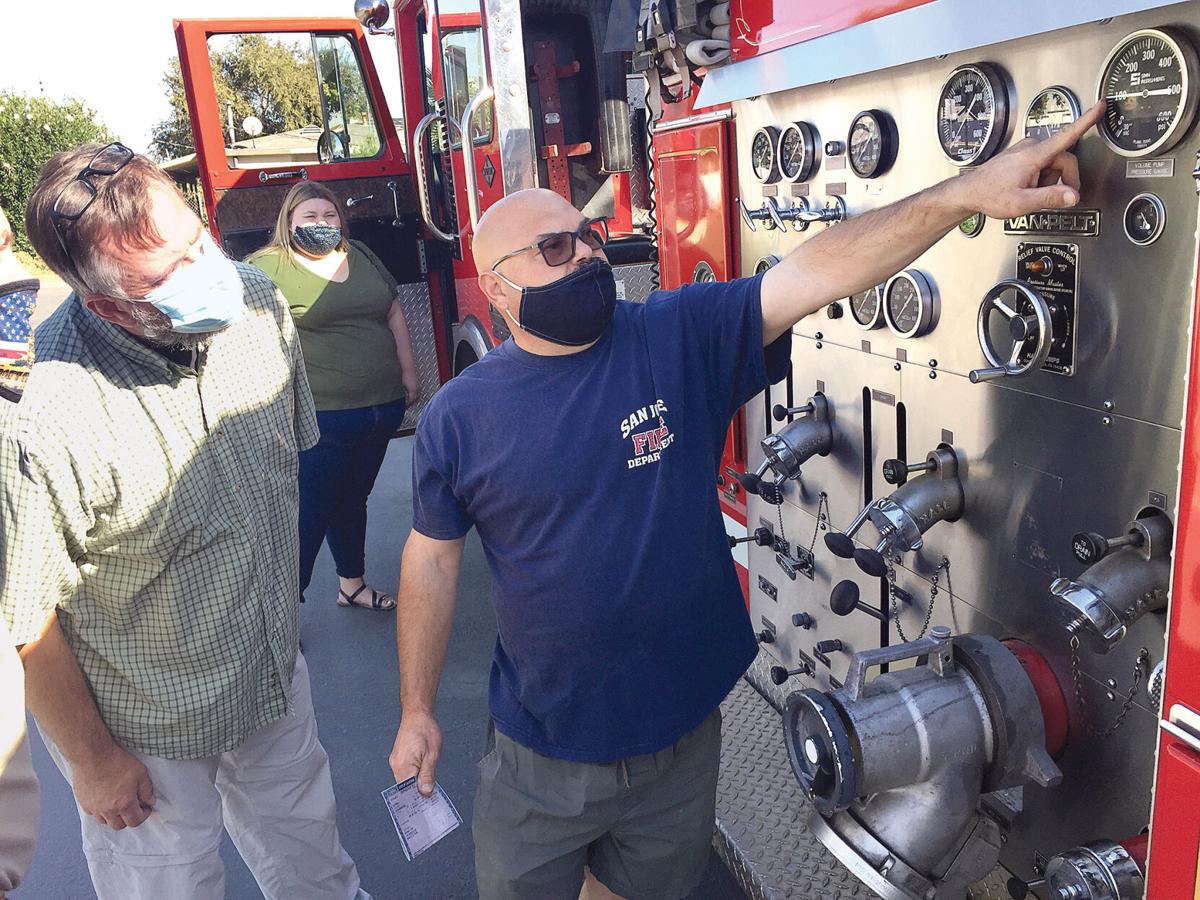 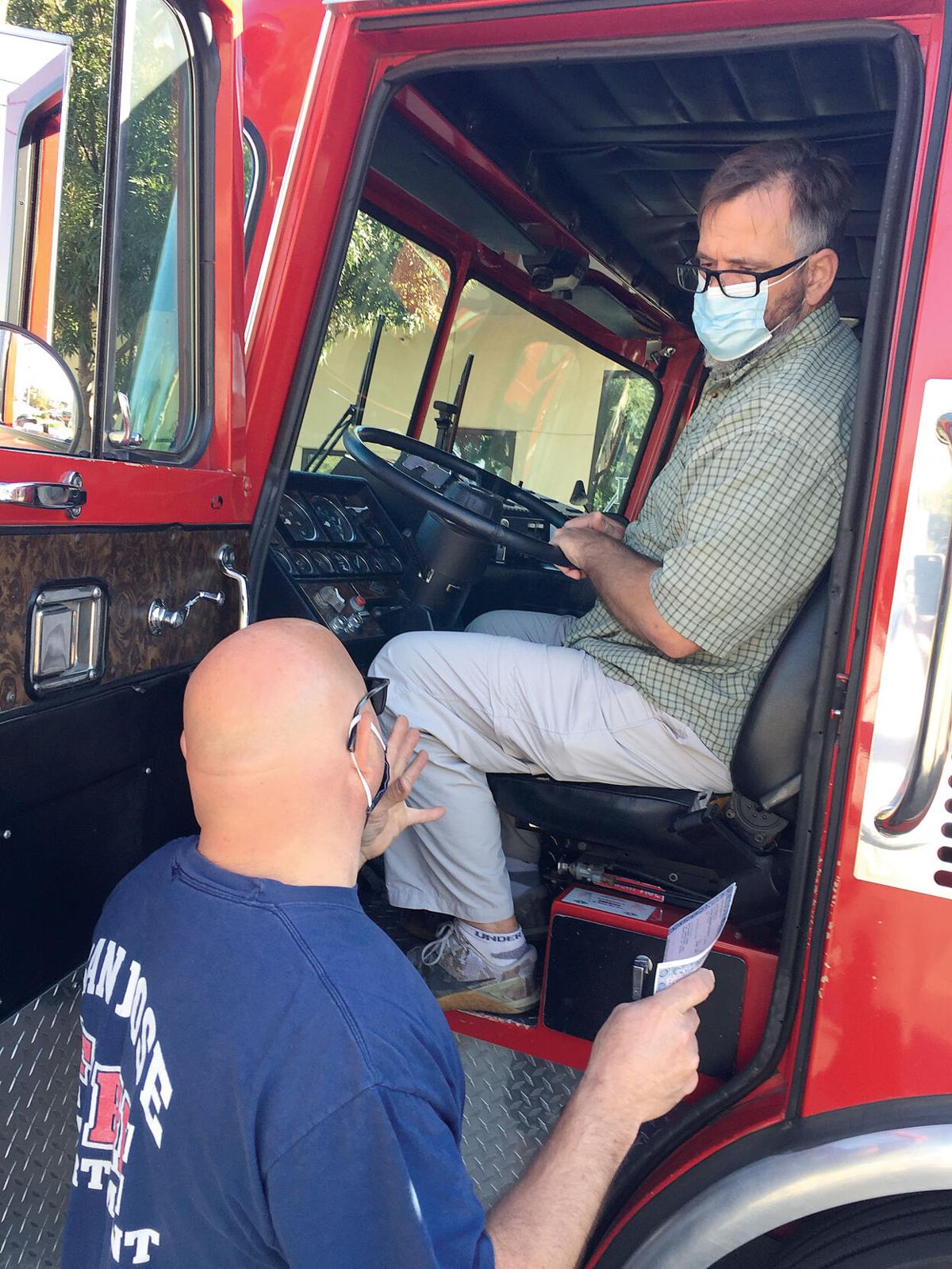 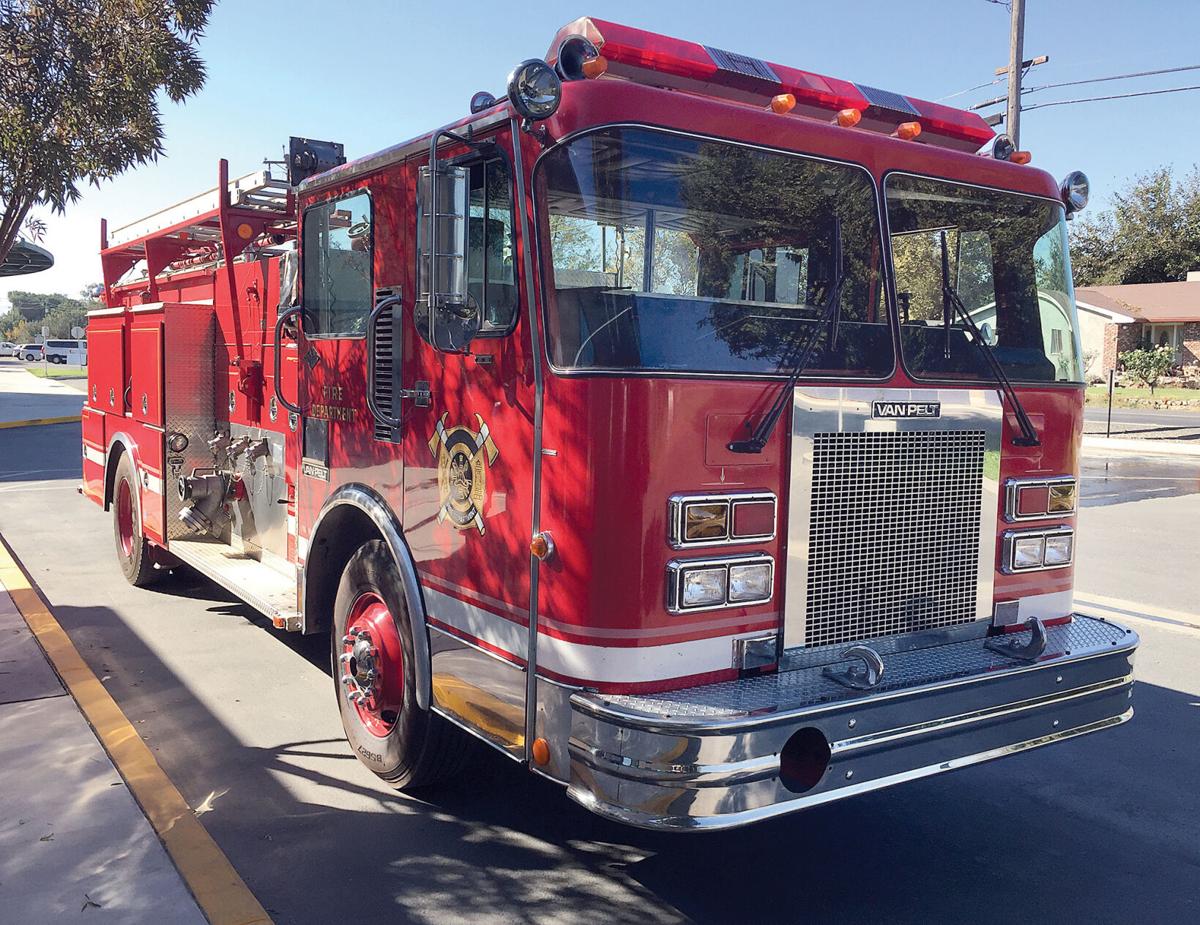 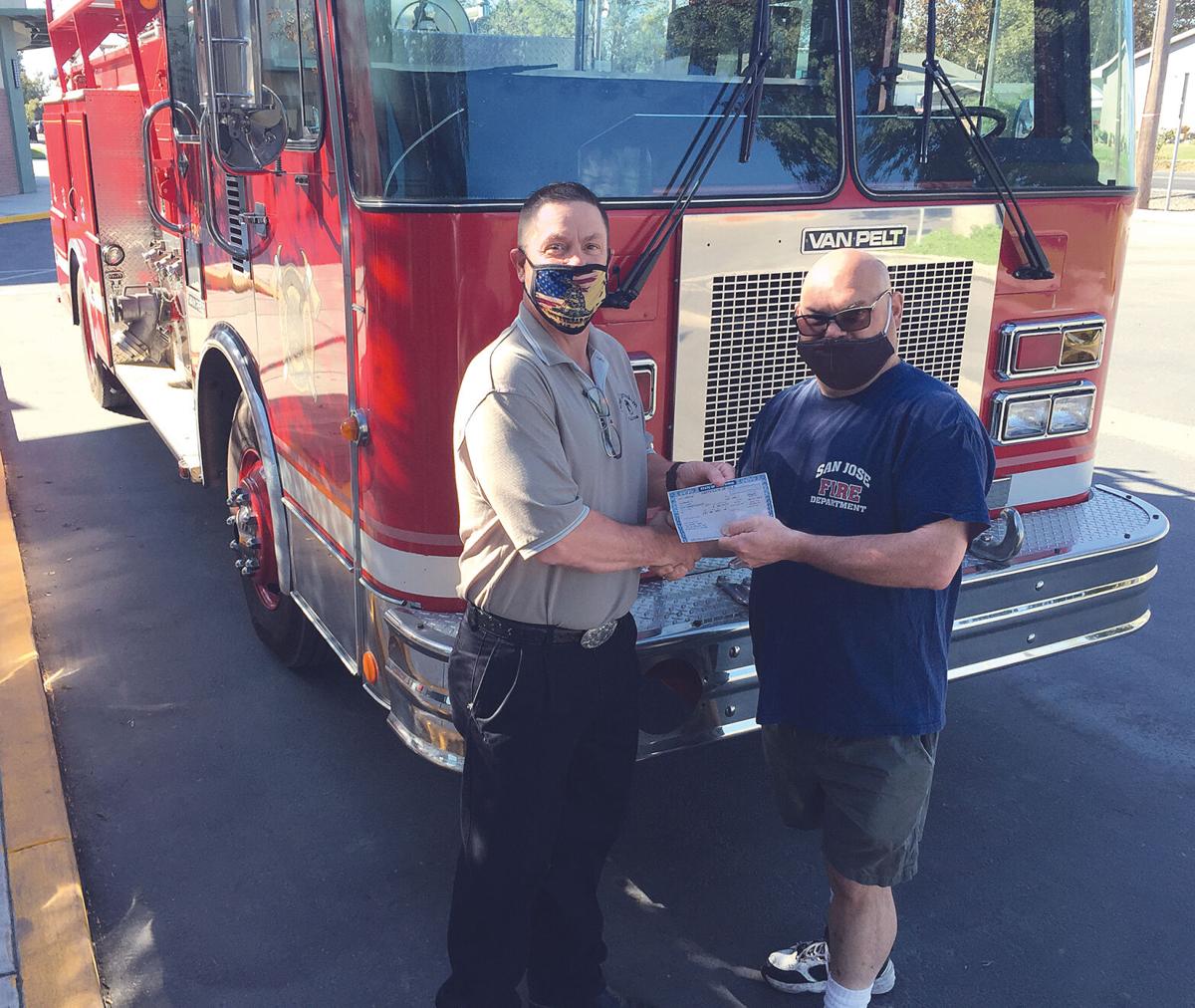 New Jerusalem School District Superintendent David Thoming accepts the ownership papers for a 1987 Van Pelt fire engine from Mark Hathaway, a city of San Jose firefighter who sold one of the engines out of his collection to Delta Charter High School’s new fire science program.

New Jerusalem School District Superintendent David Thoming accepts the ownership papers for a 1987 Van Pelt fire engine from Mark Hathaway, a city of San Jose firefighter who sold one of the engines out of his collection to Delta Charter High School’s new fire science program.

Since the start of the school year Mike Helton has been teaching DeltaCharterHigh School students about the basics of emergency services.

So far he has about 100 students in his classes, including courses in introductory fire science and emergency medical response. On Tuesday he acquired another teaching tool: a fully equipped fire engine, ready to get back in service.

“This is amazing. The kids are going to love this,” Helton said after taking delivery of the 1987 Van Pelt fire engine. “It’s completely operational so that’s nice too. It will be able to pump water, we’re going to show them how to run the panels. It’s going to be amazing for the kids to get a working fire engine they can get their hands on.”

DeltaCharterHigh School bought the engine from Mark Hathaway, a firefighter with the San Jose Fire Department and a collector of classic fire engines. Hathaway noted that while the engine is fully functional, it is also a collector’s item.

“It’s got history behind it. It’s the very last Van Pelt fire engine to be built from the Van Pelt Fire apparatus company (P.E. Van Pelt, Inc.) in Oakdale,” Hathaway said, referring to the company that opened in 1925 and continued operations until 1978, when FMC Corporation bought the company, eventually discontinuing the Van Pelt line in 1987. That year four Van Pelt employees started Hi-Tech Emergency Vehicle Service, Inc., which continues operating in Oakdale.

Hathaway sold this engine, formerly an apparatus for the Auburn City Fire Department, to DeltaCharterHigh School for $8,000. It has 73,000 miles on it and runs on a Detroit Diesel 8V92 engine with an Allison automatic transmission. It includes a 500-gallon water tank, and is capable of pumping 1,250 gallons per-minute.

He threw in several hoses, plus attachments and adapters, a 24-foot extension ladder, an attic ladder plus air tanks that firefighters would use when they enter burning or smoking buildings.

Helton said that while it has everything a crew would need to respond to a structure fire, he doesn’t expect students taking introductory fire science classes to attack burning buildings just yet. He does plan to coordinate with South San Joaquin County Fire Authority, which has a station on Durham Ferry Road across from New Jerusalem and Delta Charter schools, and also serves as Tracy’s fire department.

“Honesty what my plan is, is to work with Tracy fire to do some fire behavior classes, so we can do some small scale stuff,” he said.

Hathaway added that a working fire engine also offers students a chance to learn how to take care of a fully-equipped engine and all of its gear.

“There’s more stuff they could get, hopefully with donations from fire departments that are surplusing out old equipment,” Hathaway said. “They could have a whole array of medical gear, what’s carried on a fire engine.”

Helton just started teaching at Delta Charter this year. He is a retired military medic with 30 years of experience in emergency medical services. He noted that through his classes, students can earn up to 18 credits toward an associate degree at ModestoJunior College, where he also teaches.

“I want them to be able to go from here and say, ‘I want to go to a fire academy,’ or ‘I want to go and be a volunteer somewhere, or go work for Tracy,’ because Tracy has an amazing volunteer and Explorer program.”

He added that high school is an ideal place to get a taste for fire service. Through his classes students learn not just the operation of equipment, but also how to coordinate emergency response in a range of scenarios. Having the proper equipment and an apparatus on-site signals to students that the Delta Charter’s program is the first step toward professional training.

Delta Charter is hoping to bring students back to campus next week, and Helton introduced them to the Val Pelt engine during his remote courses.

“I already have kids who are so excited. I just got off a class, teaching and telling them, we’re going to have a fire engine for you guys to work on,” said Helton

“Just seeing that motivation change from, ‘Oh, it’s school, we’re doing Zoom, whatever,’ but when they actually get back here on campus, it’s an amazing tool for them to use.”