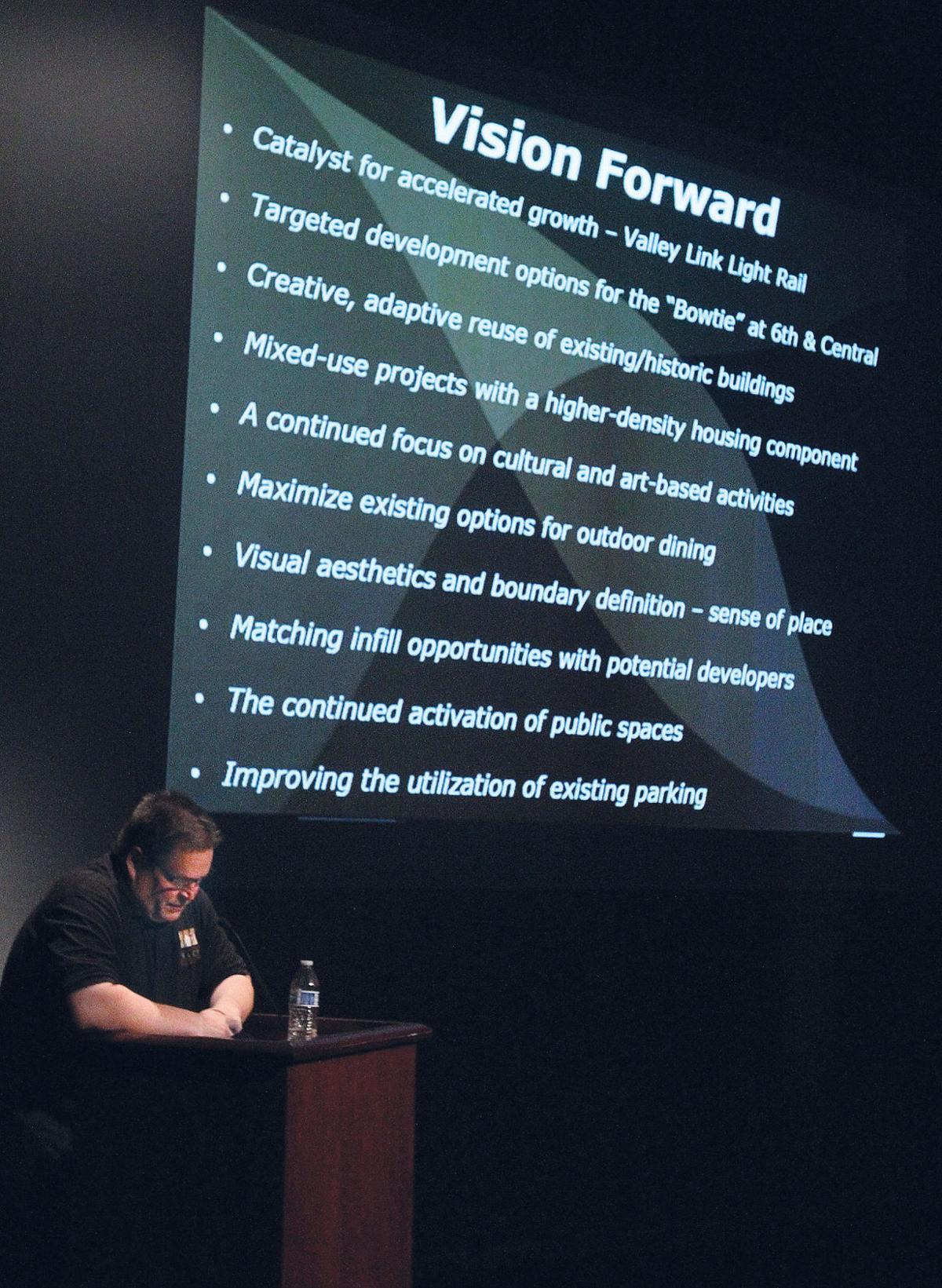 Dino Margaros, Tracy City Center Association executive director, talks about goals during the State of the District presentation Wednesday at the Grand Theatre Center for the Arts. 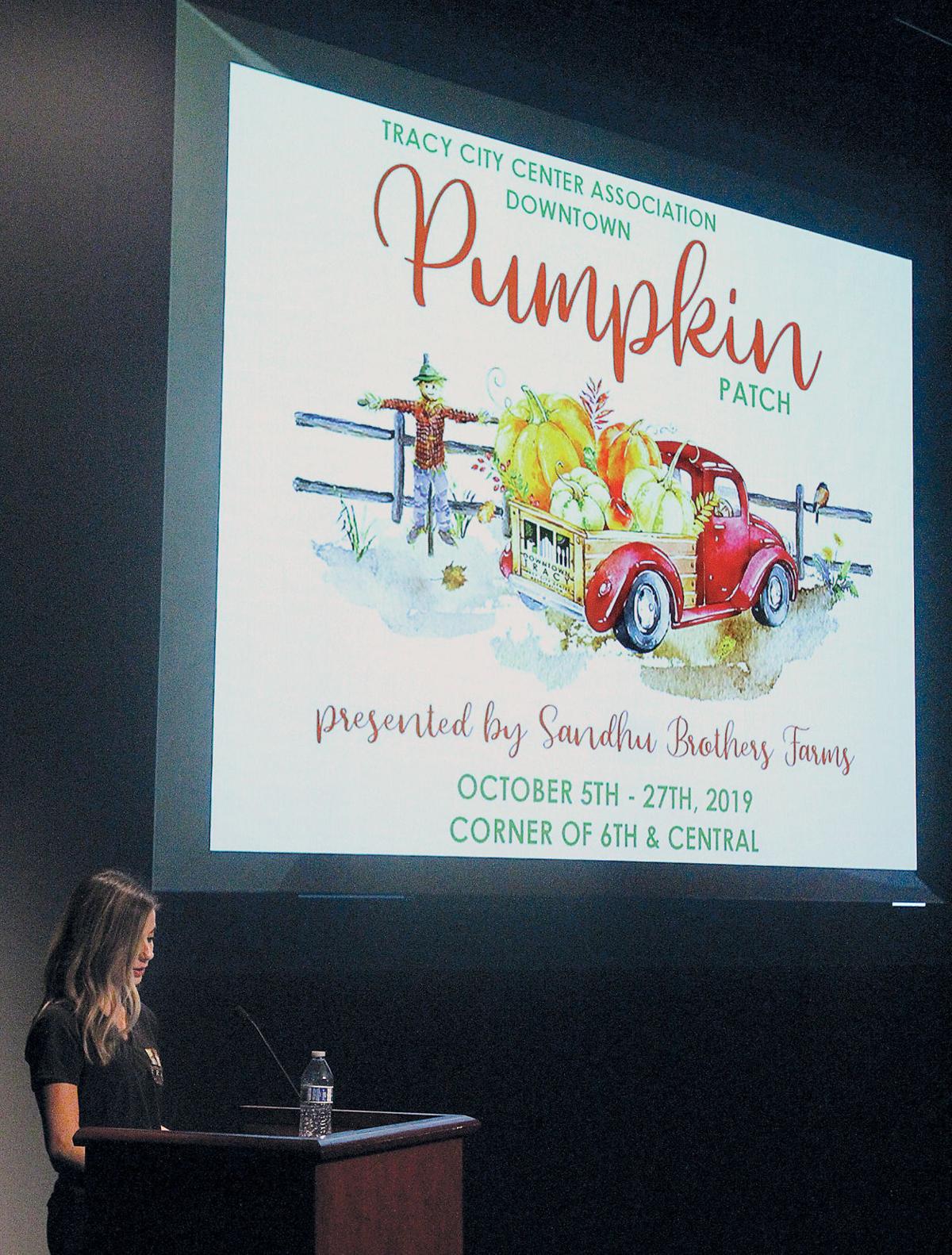 Kristin Barrios, Tracy City Center Association district manager, announces a new Pumpkin Patch that will open downtown in October during the State of the District presentation Wednesday at the Grand Theatre Center for the Arts.

Dino Margaros, Tracy City Center Association executive director, talks about goals during the State of the District presentation Wednesday at the Grand Theatre Center for the Arts.

Kristin Barrios, Tracy City Center Association district manager, announces a new Pumpkin Patch that will open downtown in October during the State of the District presentation Wednesday at the Grand Theatre Center for the Arts.

Dino Margaros, executive director of the Tracy City Center Association, says Tracy’s downtown growth is at a pivotal point and TCCA needs to be prepared for what the future could bring.

He and other leaders of the group discussed its progress at a State of the District town hall meeting Wednesday evening at the Grand Theatre Center for the Arts.

Downtown merchants, city employees and residents gathered to hear the report on TCCA’s events over the past year and goals for the coming years.

“I think the big takeaway is for everyone to realize the strides we are making downtown — the effect that our district, TCCA as an organization, has on downtown,” Margaros said. “I think we are at a crossroads — a really, really important crossroads — for downtown Tracy. There is so much happening. The Valley Link light rail project is going to be probably the biggest catalyst for growth downtown ever. Period.”

The proposed light rail project now in planning stages would connect the northern San Joaquin Valley with BART in the Tri-Valley area, and one of the planned stops is downtown Tracy.

“We got to get it right, we got to make sure were prepared for everything that is to come should Valley Link come to fruition,” Margaros said. “Very supportive of Valley Link, and you can kind of see, as far as we have come in the last 10 years, this will accelerate things even faster and allow us to do the things we can’t do organically.”

Specifically, he said, the addition of light rail service downtown could lead to medium- and high-density housing developed in the now-empty Bowtie area around the railroad tracks.

Even without light rail as a driver, Margaros said the district has seen an increase in participation at all of its events.

“I would say we’ve been growing all along,” he said. “However, probably the last year or so, year over year, we noticed a huge jump in attendance, revenue and profits for all of our events. Even more significant over the last year.”

Taps on Tenth, an annual craft beer tasting event held on 10th Street and Central Avenue, was by far TCCA’s biggest event with 1,457 people who paid for tasting glasses and 500 more who were there just for the music and food. The district’s profit for Taps on Tenth was $30,415, which was an 89 percent increase over the 2018 event.

The district’s expenses include community events, district maintenance, business attraction and administration. Members pay an assessment fee, and Margaros said there was talk of raising the fee at some point.

“We’ve never done it. It hasn’t been decided. It’s been discussed as an option to raise revenue. It’s similar to you have to keep up with inflation, things are more expensive now than they were 10 years ago,” he said. “It’s kind of like not raising the rent on a tenant. At some point you have to do it to keep up with expenses.”

The district — now limited to West 10th Street between A and Central Avenue, Central between 11th and Sixth streets, and the commercial block of Sixth from Central to D Street — could also expand its borders east or west to increase revenue.

Looking forward, TCCA will roll out several new events this year, including a pumpkin patch in October and a Christmas tree lot in December on the open lot at the northwest corner of Sixth Street and Central Avenue.

“We’re looking at ways to engage the community,” Margaros said. “We’re looking for things that are family friendly, and the pumpkin patch fits right in that alley, and the Christmas tree lot fits in for all the things we do for the holidays.”

Given the increase in people visiting downtown, Margaros hopes more Tracy residents will get involved.

“The success of our downtown is going to be driven by our community in general, whether it’s through support or through volunteering or being on our board or being a merchant downtown, but the biggest thing is we have got to connect with people who don’t even know we have a downtown,” he said. “We want to make sure we reach out to them, we market to them — we want them engaged in all the activities downtown and the socialization downtown, because that’s really what makes you feel part of a community.”

Learn about the history and purpose of the downtown district and some of its upcoming events at www.tracycitycenter.com.

“I think we are at a crossroads — a really, really important crossroads — for downtown Tracy. There is so much happening. The Valley Link light rail project is going to be probably the biggest catalyst for growth downtown ever. Period.”

Here is an idea. I think we should make all city council members commute over the Altamont Pass each and every day during rush hour ... and back again in the evening. Maybe then they will understand the urgency of getting Valley Link completed. This project is WAY behind schedule.