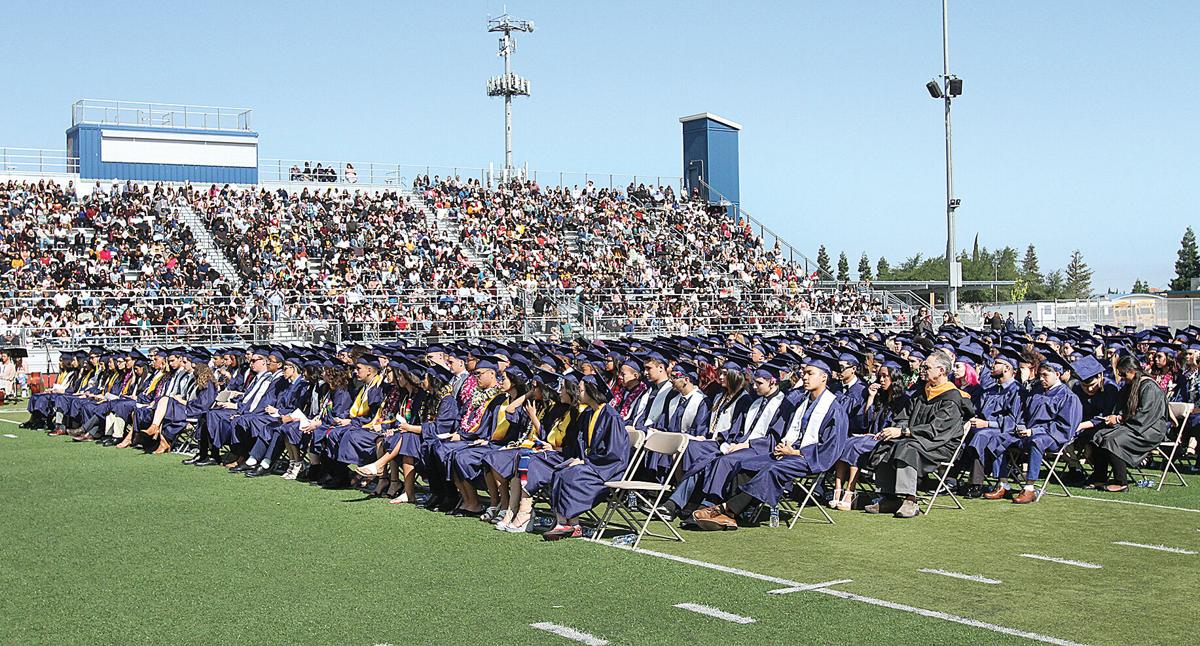 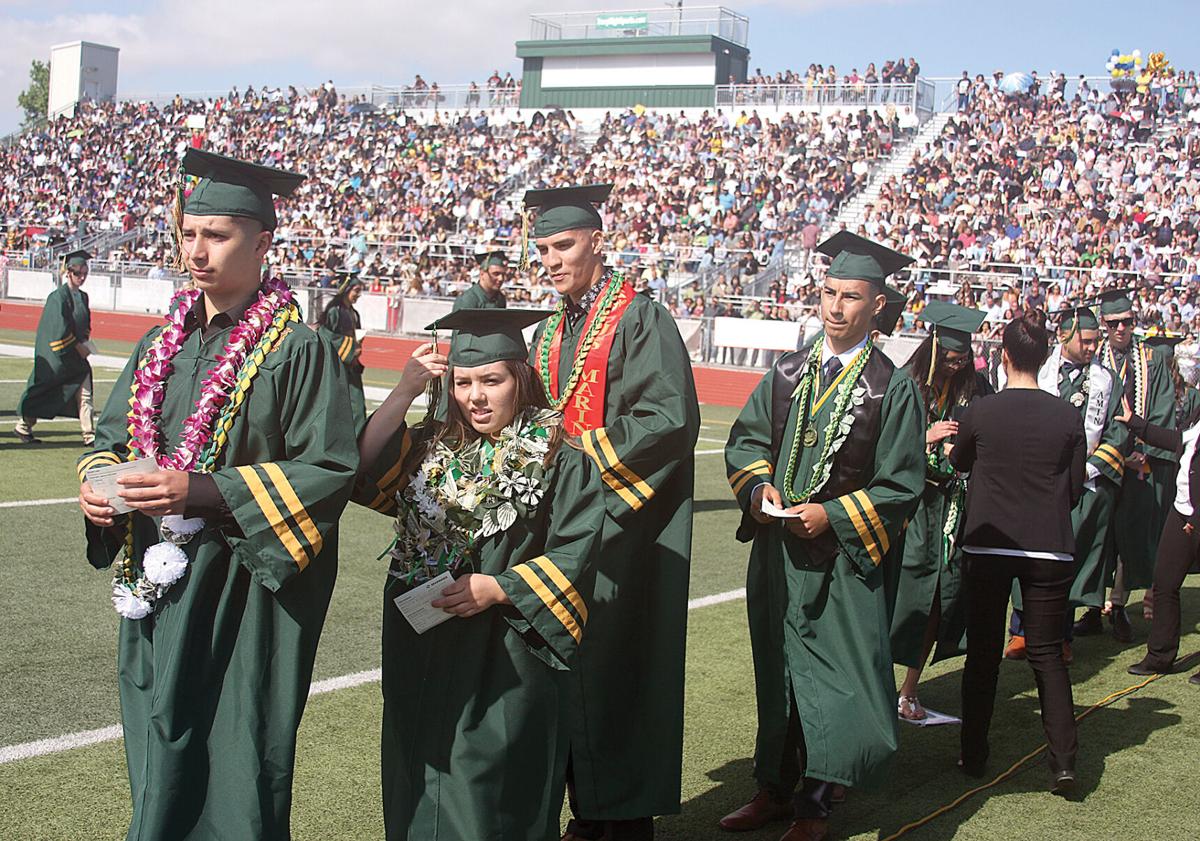 Tracy High graduates take the field in 2019 during their graduation ceemony at Wayne Schneider Stadium.

Tracy High graduates take the field in 2019 during their graduation ceemony at Wayne Schneider Stadium.

Tracy Unified School District announced at its Tuesday board of education meeting that seniors will have in-person graduation ceremonies with a limited number of guests in the Tracy, West and Kimball high school stadiums and at Stein High, while eighth-grade students will promote with drive-thru ceremonies.

Mary Petty, Director of Student Services, said with the county’s move into the red “substantial” tier under the state’s Blueprint for a Safer Economy, the district will be able to have in-person commencement ceremonies for the Class of 2021 after last year’s ceremonies for graduating seniors were cancelled because of the COVID-19 pandemic.

Seniors will be limited to four attendees each to stay within red tier guidance for event capacity.

Under the red tier schools can host graduation ceremonies with 20% of the stadium capacity.

To maintain those capacity limits high school graduation ceremonies will be split into groups by last name and spaced through the morning and afternoon.

“Our high school and adult school and charter school principals were very passionate about making sure that we could get the most attendees per student into our ceremonies that we possibly could,” Petty said. “Unfortunately, that meant we had to break up our ceremony times in order to allow four attendees per student at each of these ceremony events.”

The ceremonies are staggered to allow time for the event area to be cleaned and disinfected for the next group coming in.

“It’s not ideal, but it is better than not being able to have your family and friends that are closest to you there,” Petty said. “The principals were super passionate about that and they’re working really hard to communicate this information and try to appease everyone. We’re just excited that we’re having a graduation ceremony this year.”

• Stein High will graduate approximately 75 seniors during two ceremonies at 9 a.m. and noon on May 26 at a field area on campus, which will have a capacity limit of 120 people during the ceremonies.

• Tracy Adult School will graduate approximately 55 seniors during a single ceremony at 6 p.m. on May 26 at west High’s Steve Lopez Stadium, which will have a capacity limit of 831 people during the ceremonies.

• Kimball High will graduate approximately 310 seniors during two ceremonies at 8:30 a.m. and 11:30 a.m. on May 29 at Don Nicholson Stadium, which will have a capacity limit of 741 people during the ceremonies.

• Tracy High will graduate approximately 450 seniors during three ceremonies at 9 a.m., noon a.m. and 3 p.m. on May 29 at Wayne Schneider Stadium, which will have a capacity limit of 837 people during the ceremonies.

• Tracy Independent Study Charter School will have a virtual ceremony for 10 graduates at 5 p.m. on May 27 and students will be provided a link for the event.

In meetings with principals of middle and K-8 schools TUSD officials found that students wanted a drive-thru promotion ceremony similar to last year. The principals collectively decided to have the ceremonies, which will be staggered over three days.

Eighth grade promotions will be on these days:

• Kelly School will have a drive through ceremony in the parking lot at 10 a.m. for approximately 128 students.

• Freiler School will have a drive through ceremony in the parking lot at 5 p.m. for approximately 100 students.

• North School will have a drive through ceremony in the parking lot at 5 p.m. for approximately 120 students.

• Poet Christian School will have a drive through ceremony in the parking lot at 10 a.m. for approximately 75 students.

• Monte Vista Middle School will have a drive through ceremony in the parking lot at 1 p.m. for approximately 300 students.

• Williams Middle School will have two drive through ceremonies in the parking lot at 1 p.m. and 2:15 for approximately 300 students.

There are no capacity limits for vehicles as long as everyone stays in their vehicles.

Students also reported they liked the idea of “personal microphone time” — where students received a personal comment about them as they approached the podium area during the promotion ceremony.

Board Vice President Steve Abercrombie asked what would happen if the county moved to the less restrictive orange tier before the ceremonies, if there was a deadline to make the decision to adjust capacity limits.

“Unfortunately for facilities — in order to get chairs and stages set up — right now is it,” Petty said. “If we do move to orange there is a two-week gap and then at that point it would be hard to organize all of these different sites. So, we made the decision on Friday that this was it.”

Petty later added she didn’t even know how much of a change the orange tier’s 33% capacity limit would make on the number of attendees and if they could get additional tickets, if any were even allowed, to the graduates.