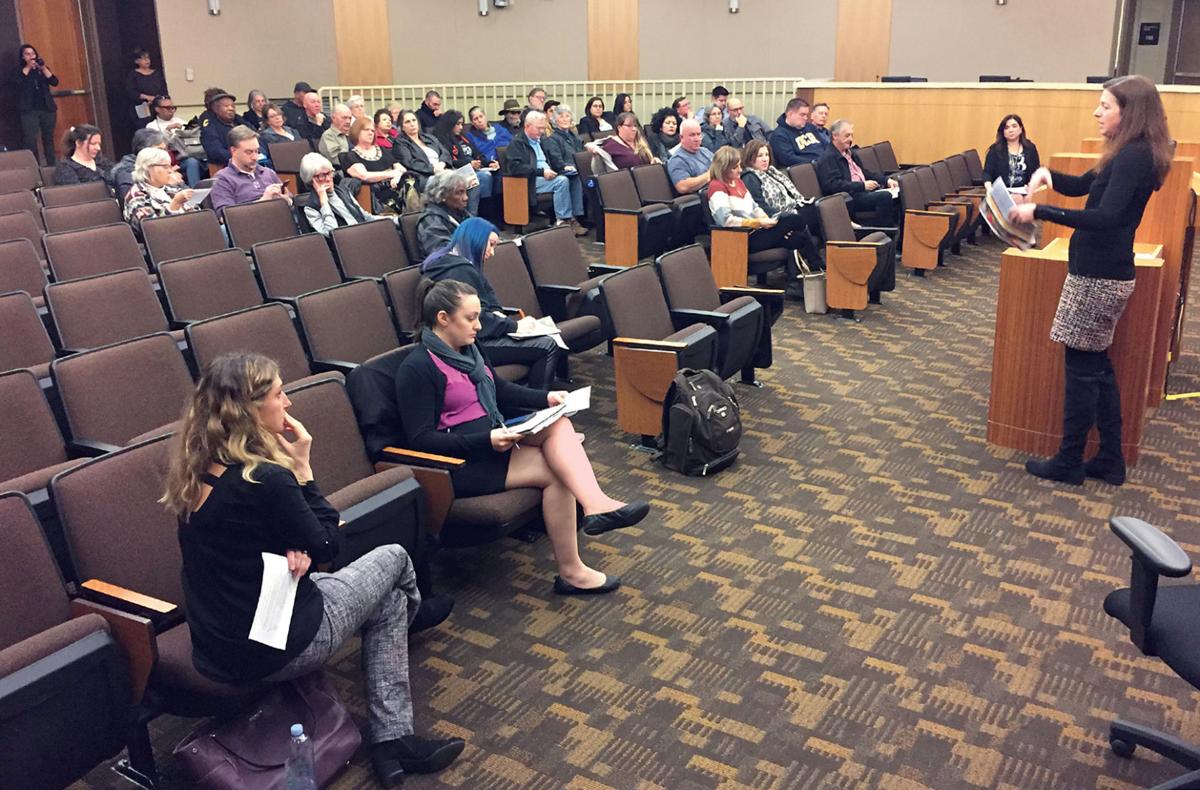 Nicole LiBaire (right), senior planner with Technical Assistance Collaborative, discusses the progress that her consulting company and the city are making on a plan to help homeless people in Tracy at Tracy City Hall on Tuesday. 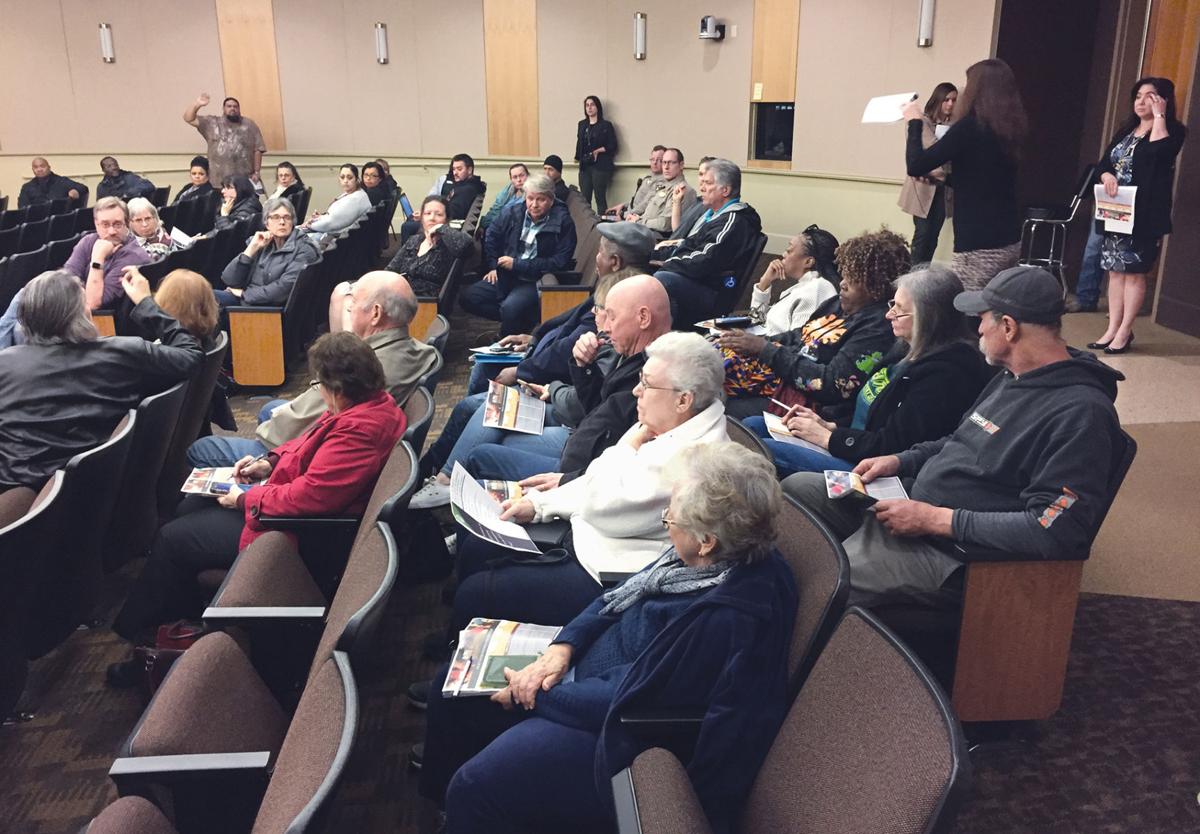 A crowd of about 60 people listened in on the city of Tracy’s progress on creating a plan to help homeless people in Tracy at Tracy City Hall on Tuesday.

Nicole LiBaire (right), senior planner with Technical Assistance Collaborative, discusses the progress that her consulting company and the city are making on a plan to help homeless people in Tracy at Tracy City Hall on Tuesday.

A crowd of about 60 people listened in on the city of Tracy’s progress on creating a plan to help homeless people in Tracy at Tracy City Hall on Tuesday.

Little by little, the city of Tracy is getting closer to a plan to address homelessness in town.

A presentation on Tuesday outlined goals and strategies for how to get people into shelter and keep them housed, and the city also heard from people who are frustrated with what seems like endless planning as the number of people without shelter continues to rise.

Nicole LiBaire and Gina Schaak, senior associates with Technical Assistance Collaborative, the consultants putting together the city’s strategic plan, outlined the variety of federal, state and local resources to address homelessness and the goals of the plan.

LiBaire told the crowd of about 60 people that the point of the plan is to channel money from the state and federal governments toward local goals. The list of goals at the center of the draft plan includes increasing opportunities for housing, increasing services for homeless people, coordinating local resources, helping people at risk of homelessness, and helping homeless veterans.

“What you are doing is supporting all of that work, but saying, ‘This is what’s specific to the needs of the city of Tracy, and that’s what’s going to help us achieve all of these goals,” LiBaire said.

Lindsey Slama, the homelessness program representative for the California Department of Housing and Community Development, spoke about a long list of state and federal programs that could fund local programs. The next step is to put that money to work.

“The governor is looking to find sites, state land, to build housing and which can also be used for temporary housing,” Slama said. “The idea is that this is much faster to develop than the usual route with developers.”

Jennifer Rowell, who is on the board of directors for the San Joaquin County Continuum of Care, added that Tracy’s plan — in addition to a similar plan nearing completion on the county level — will assure that resources are directed where they’re needed most.

“This won’t be theoretical. This won’t be, ‘Gee, wouldn’t it be nice,’” Rowell said. “This is going to be: Here’s what needs to happen and here are the next steps.”

She added that the ongoing collection of data, such as a biennial point-in-time homeless count, is necessary to convince state and federal policy makers about which local programs are the appropriate places to send money.

“The better our data is, the more we’re able to tap into funding to directly address the issue,” Rowell said.

“We as a community need to put our heads together and figure out what is doable. How can we address the problem immediately, and then what is the long-term strategy? That’s what needs to happen here, and not throwing money at the problem.”

After an hourlong presentation, the more vocal among the 60 or more people at the meeting, including some who are now or have been homeless, expressed frustration that studies are still being done, plans are in the works and funding is on the horizon. Meanwhile Tracy sees more and more people living on the streets and in parks, even as the conditions that cause people to become homeless grow worse.

Tracy resident and former planning commissioner Pete Mitracos said his observation was that mental health issues, including drug addiction, were often at the core of homelessness issues.

“If you put somebody who has serious problems in some kind of housing, they’re not going to be successful,” Mitracos said. “The focus needs to be on mental health.”

Rowell disagreed and said that it’s a common misunderstanding that her efforts aim to address.

“We talk about housing and services and it’s not ‘either-or.’ It’s ‘yes-and.’ No responsible service provider is going to say, ‘Put somebody in a house and good luck,’” she said. “It’s always housing first, because people respond better to treatment when they have a roof over their heads and are surrounded with the services they need.”

Tracy resident Allen Waters, who said he was once homeless and has since become a homeowner, suggested that the path toward solutions includes the understanding that homelessness isn’t one single problem.

“There’s multiple levels of homelessness, and I haven’t heard anything about that,” Waters said. “We as a community need to put our heads together and figure out what is doable. How can we address the problem immediately, and then what is the long-term strategy? That’s what needs to happen here, and not throwing money at the problem.”

Others asked why resources at hand today haven’t been put to use.

Local real estate agent and property manager Dave Konesky said that plans in the works now won’t see action until spring at the earliest and don’t address the sense of urgency that people on the street experience during winter.

“My intent is to understand why the city cannot just build a shelter,” he said. “Maybe the question is, what can the city do?”

Attendees also suggested that the city does have resources to help the homeless now, including city-owned properties where homeless people could park cars or set up temporary shelters.

“This is up to the city to deal with, and when it’s below freezing, we need a place now for people,” said one woman, who said that nonprofits and churches have taken on responsibilities that local government should handle. “Whether it’s working with hotels in town for vouchers, whether it’s using the City Hall parking lot to put up tents, I don’t see why that can’t be an agenda item at the next City Council meeting.”

The next regular meeting of the Tracy City Council on Tuesday will include a “comprehensive strategic planning update” as the next step in the series of meetings on this plan. On March 17, the council will take a detailed look at the draft strategic plan developed by Technical Assistance Collaborative.

No help for homeless — Peter Claffey