Starting at
$52.00 for 365 days
Get Started
View all rates
You have permission to edit this article.
Edit
Welcome, Guest
COVID-19 Coverage
News
Voice
Our Town
Sports
Datebook
Obituaries
Advertising
Classifieds
Special Sections
1 of 13 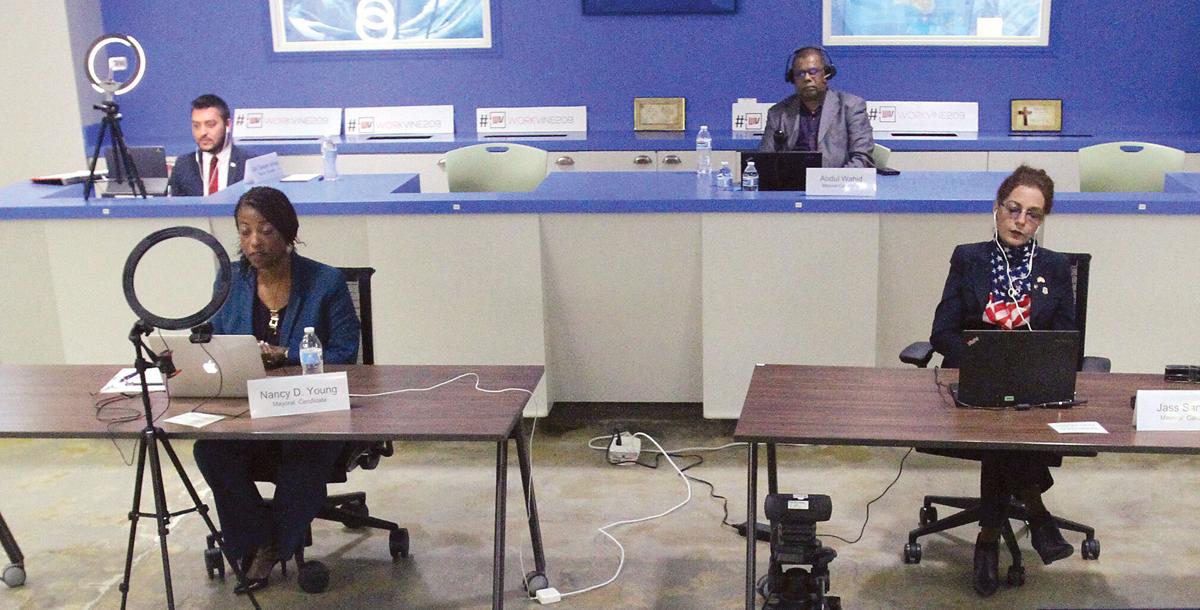 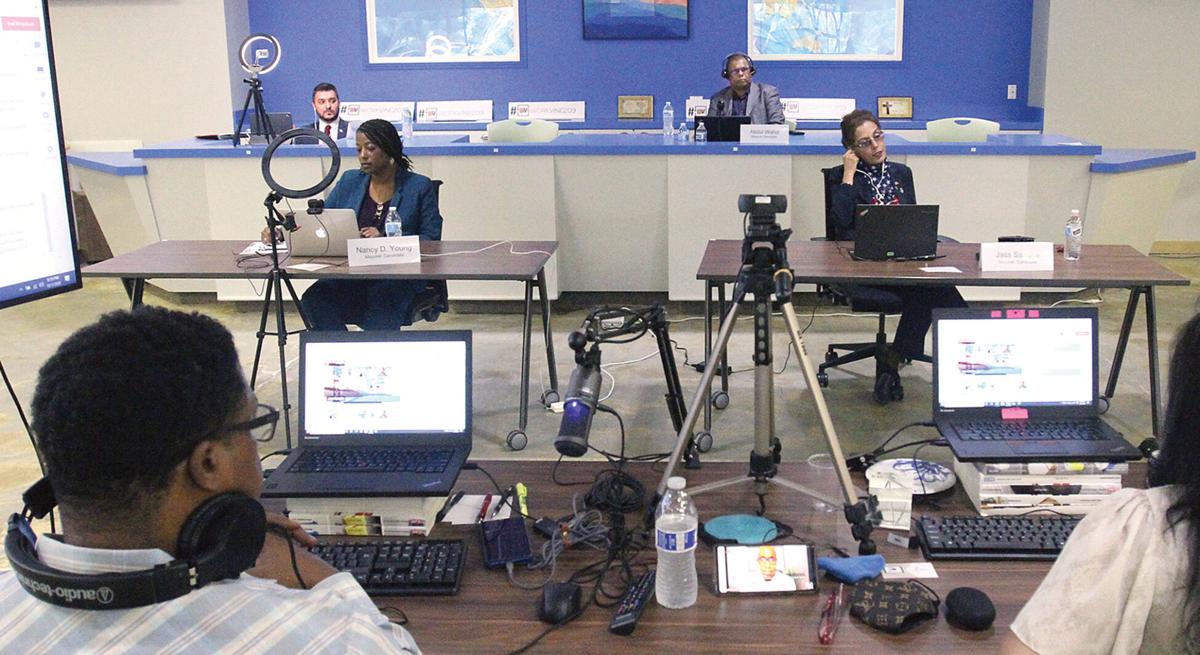 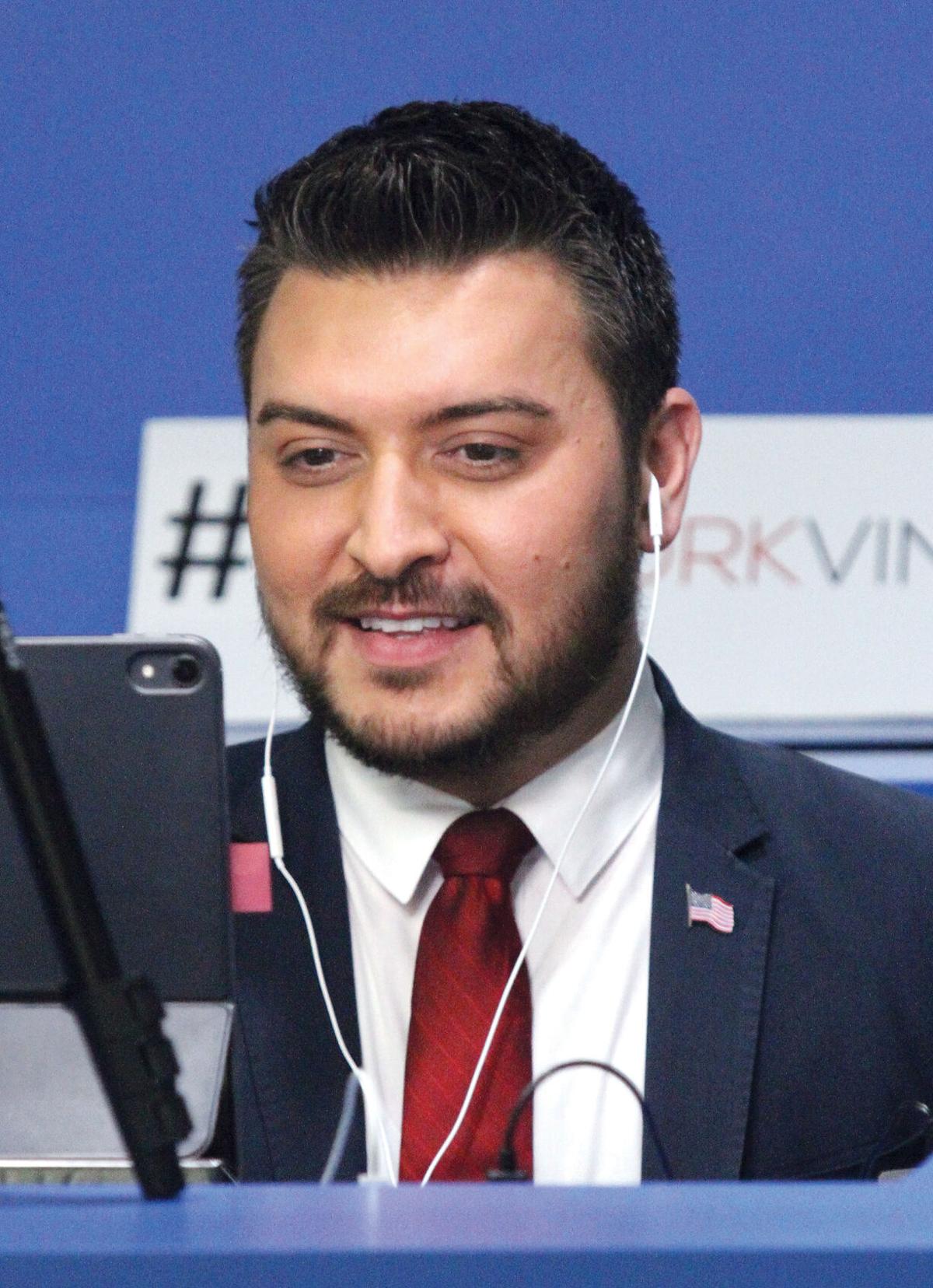 Dan Arriola speaks at a forum for mayoral candidates at WorkVine 209 on Oct.1. 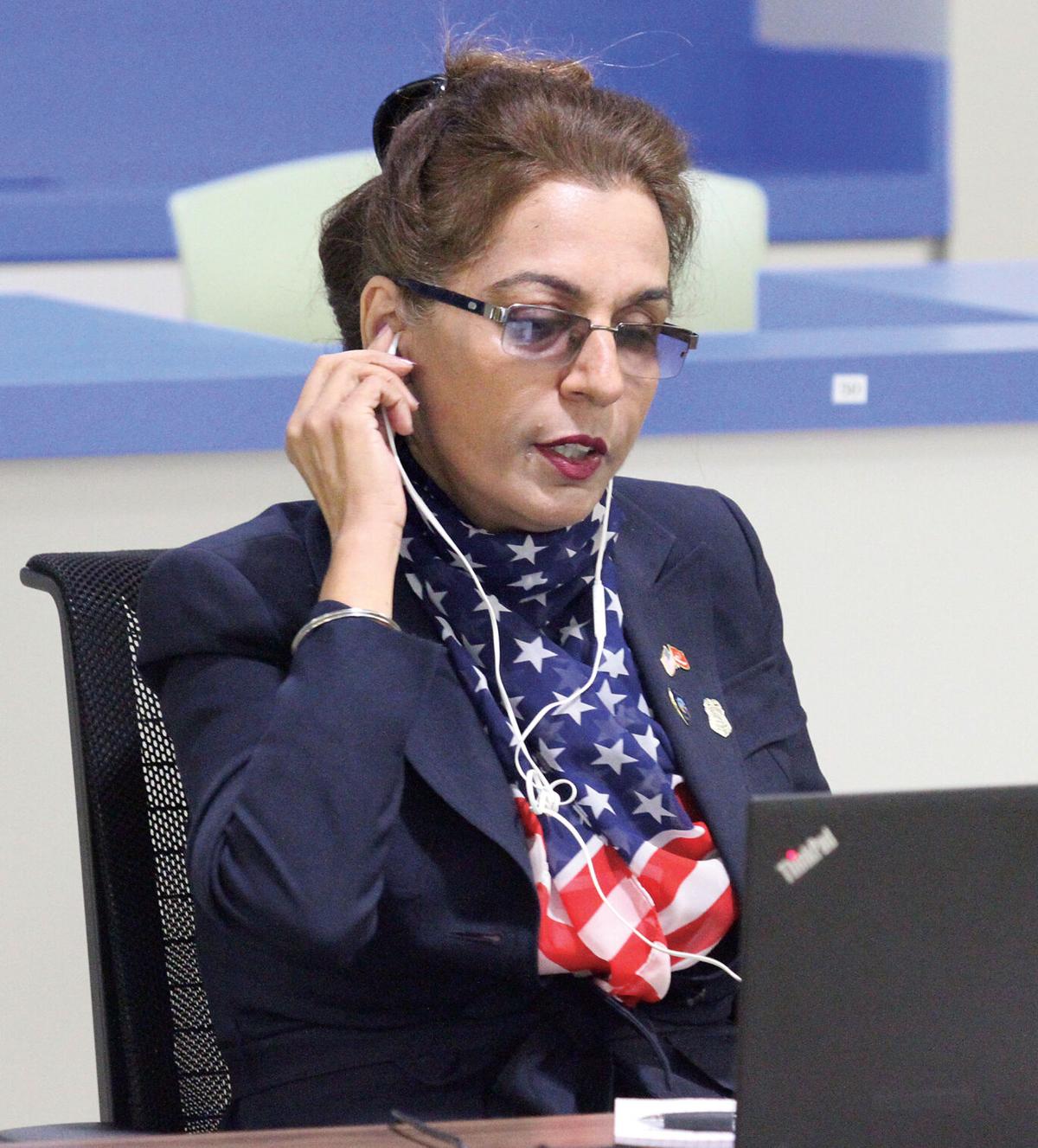 Jass Sangha answers a question at a forum for mayoral candidates at WorkVine 209 on Oct.1 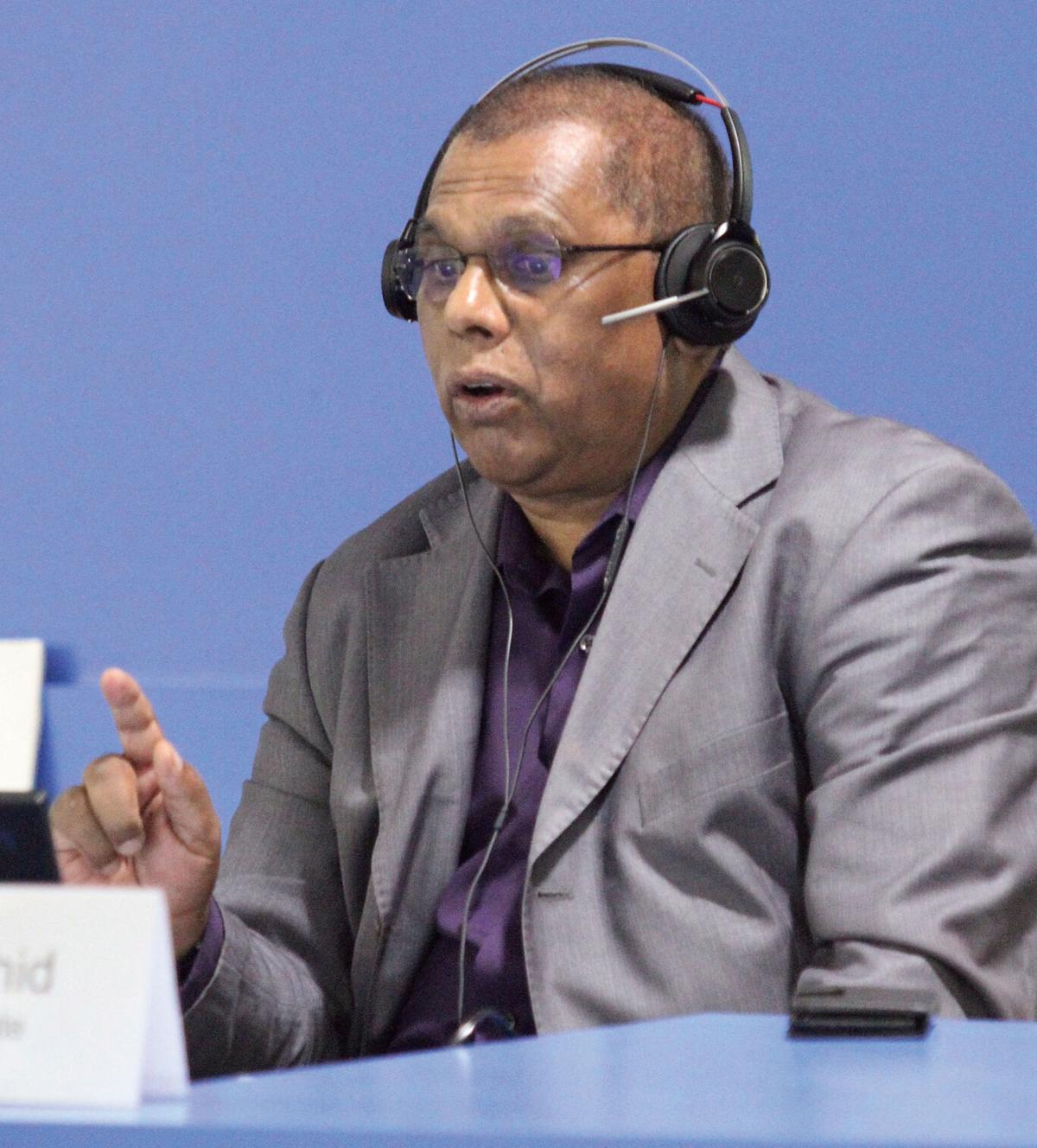 Abdul Wahid takes his turn talking at a forum for mayoral candidates at WorkVine 209 on Oct.1 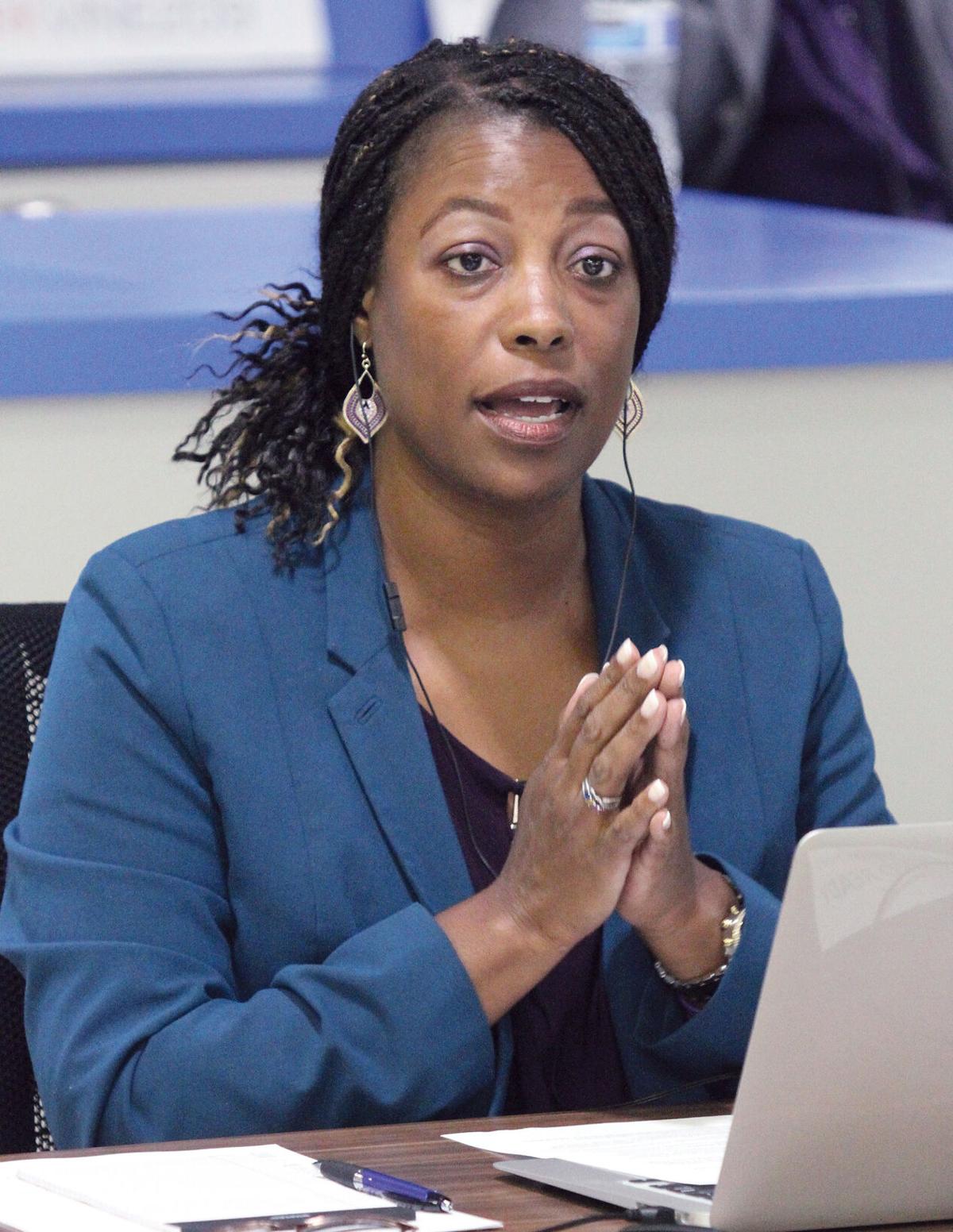 Nancy Young addresses the community at a forum for mayoral candidates at WorkVine 209 on Oct.1 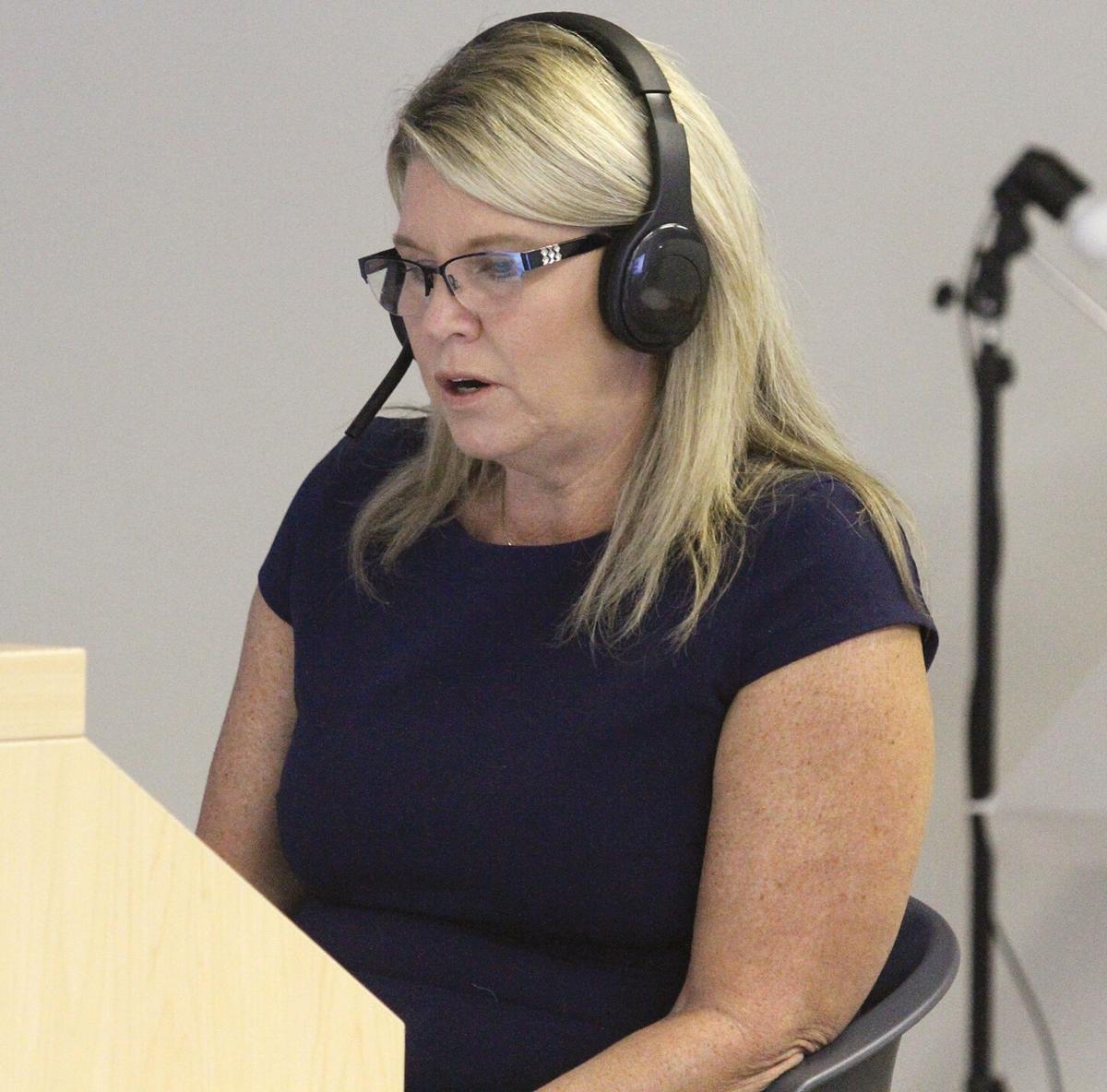 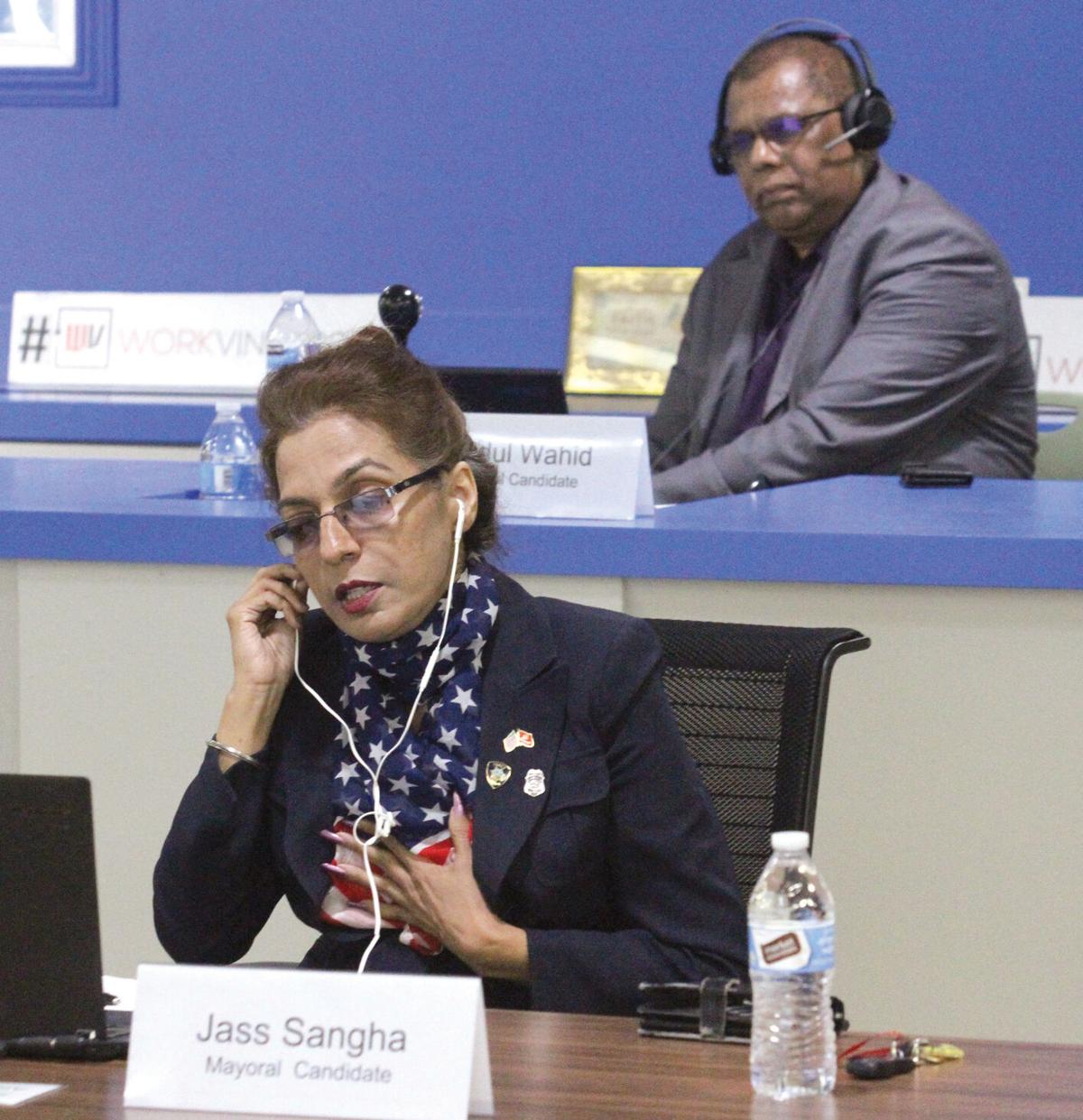 Mayoral candidate Jass Sangha introduces herself as Abdul Wahid looks at a forum at WorkVine 209 on Oct.1 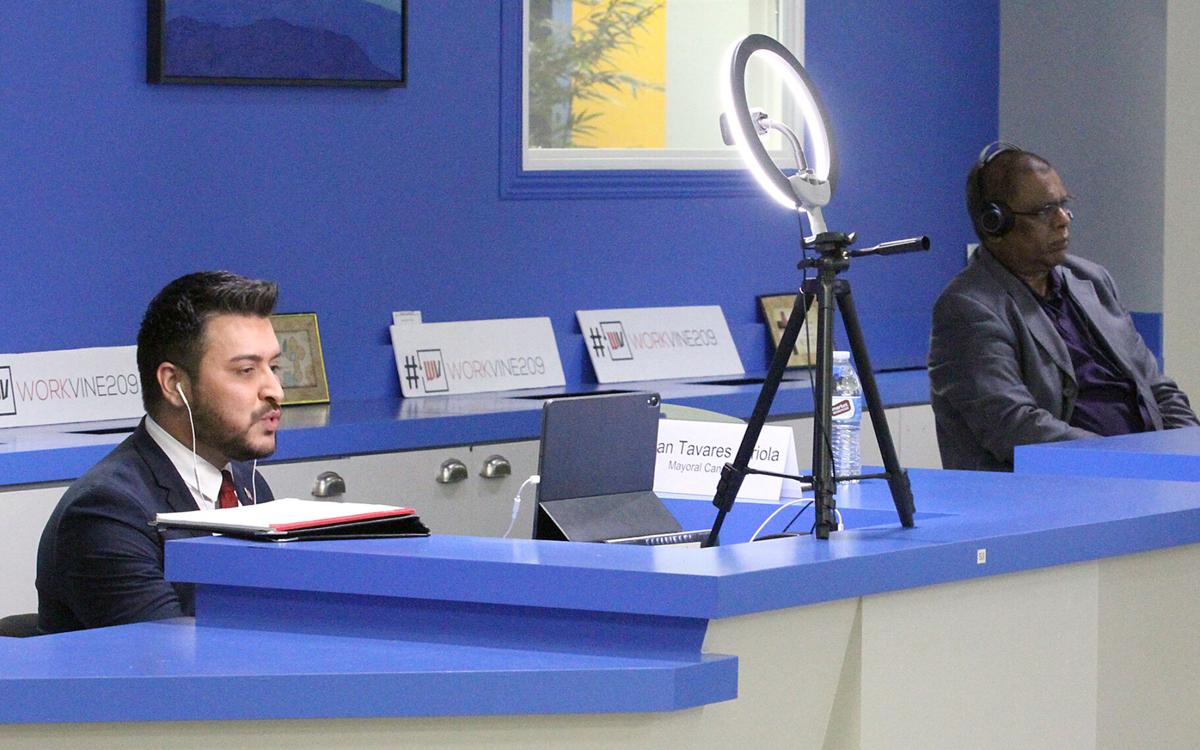 Mayoral candidate Dan Arriola answers a question as Abdul Wahid looks at a forum at WorkVine 209 on Oct.1 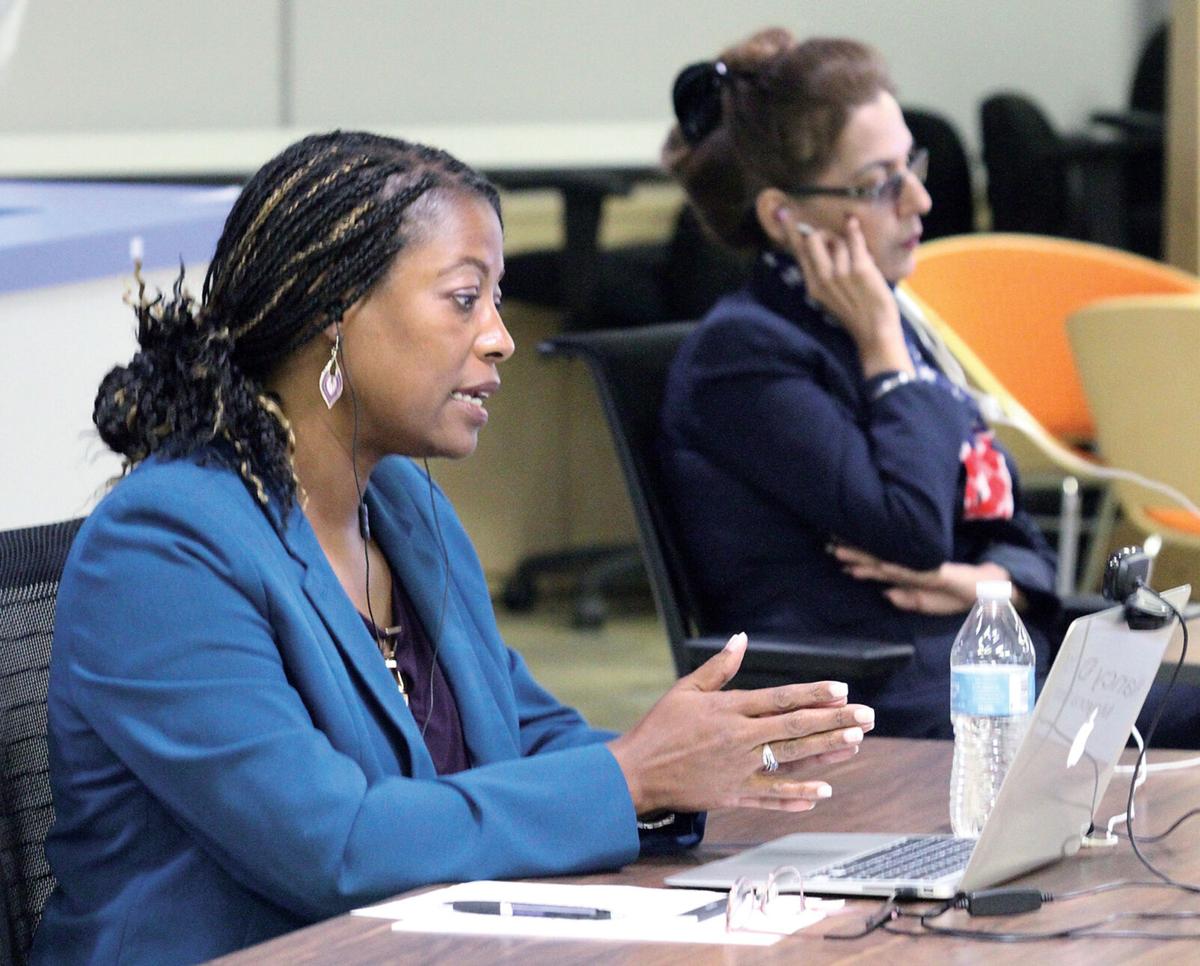 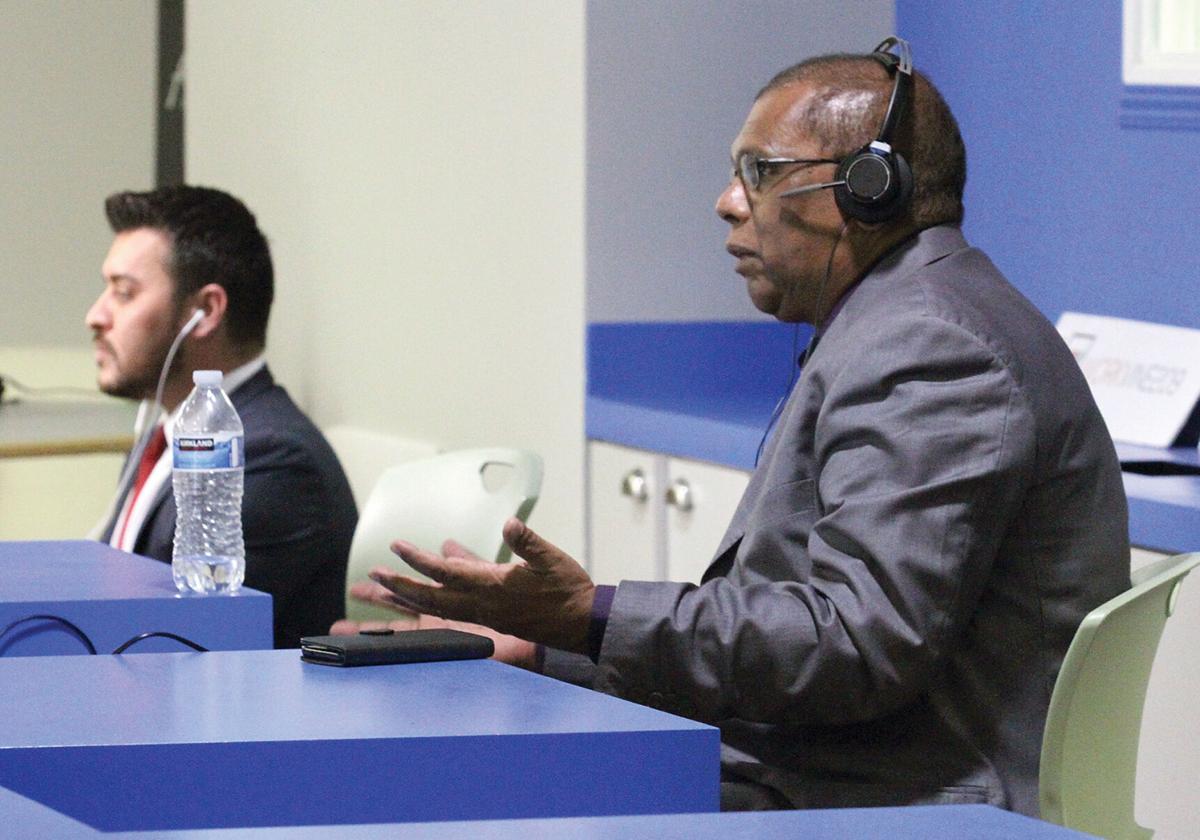 Mayoral candidate Abdul Wahid (right) speaks at a forum at WorkVine 209 on Oct.1 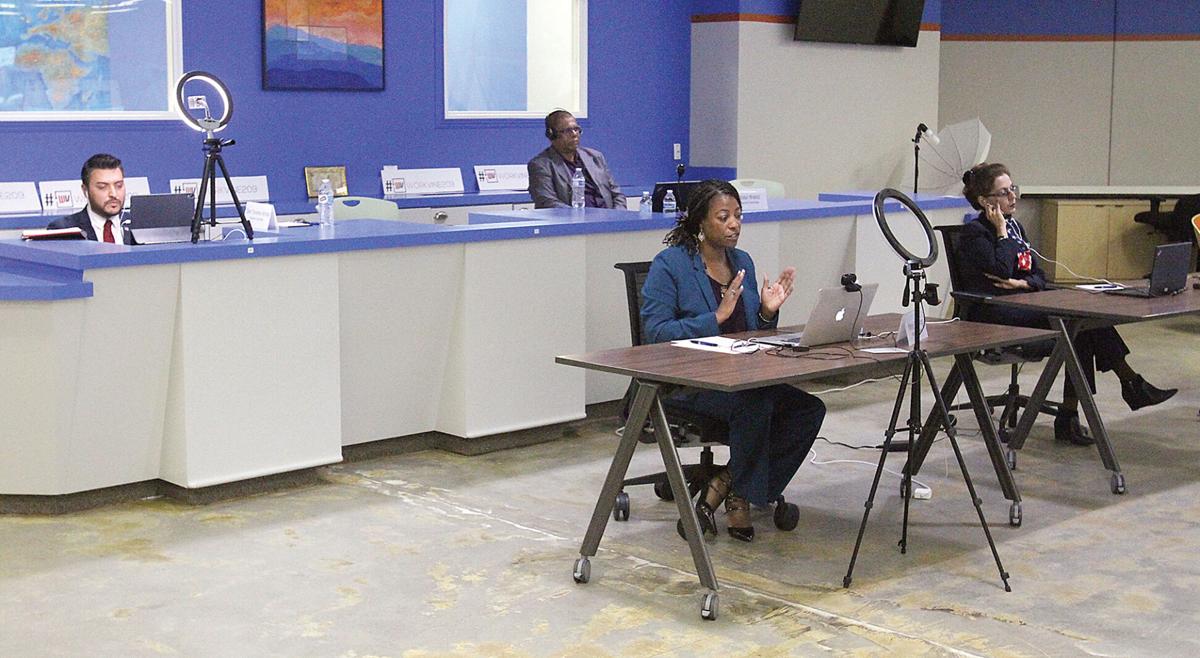 Dan Arriola speaks at a forum for mayoral candidates at WorkVine 209 on Oct.1.

Jass Sangha answers a question at a forum for mayoral candidates at WorkVine 209 on Oct.1

Abdul Wahid takes his turn talking at a forum for mayoral candidates at WorkVine 209 on Oct.1

Nancy Young addresses the community at a forum for mayoral candidates at WorkVine 209 on Oct.1

Mayoral candidate Jass Sangha introduces herself as Abdul Wahid looks at a forum at WorkVine 209 on Oct.1

Mayoral candidate Dan Arriola answers a question as Abdul Wahid looks at a forum at WorkVine 209 on Oct.1

Mayoral candidate Abdul Wahid (right) speaks at a forum at WorkVine 209 on Oct.1

Four candidates seeking the office of Tracy mayor gathered on Oct. 1 at WorkVine 209 in the Northgate Village center on Pescadero Avenue to talk about issues facing the city and their priorities for the next two years.

Tracy voters will select one of them to replace Mayor Robert Rickman, who is ineligible to run again because of term limits and will seek a seat on the San Joaquin County Board of Supervisors on Nov. 3.

The Tracy Chamber of Commerce hosted the event in partnership with the Tracy Press, and chamber CEO Tamra Spade served as moderator. She presented questions from the online audience watching by way of Facebook and WorkVine 209’s You Tube channel.

Topics included establishment of a higher education campus in town, safe bicycle paths, the candidates’ leadership qualifications, recreational amenities like a planned aquatics center in the Ellis neighborhood, a measure on Nov. 3 to give development priority to housing around a downtown transit hub, efforts to keep downtown vibrant during the COVID-19 pandemic, council meeting protocol, plans to bring cannabis dispensaries in Tracy and the city’s response to the homelessness crisis.

Following the recent departure of Notre Dame de Namur University, the candidates talked about what it would take to attract a 4-year university to town.

“The best way to bring them somebody here is with incentives ─ Tax incentives,” Sangha said. “We did give them to Amazon, we did give them to Macy’s, so there is always a chance to come to the table, have a negotiation where we can ask people to work with us. The biggest thing I think in this day and age is about infrastructure. If we have the infrastructure to follow, if we have anything that can bring the university to us, we can say ‘Yes, we can work with you.’”

Young said a university should be seen as an opportunity for Tracy’s own population, adding that people in business, government and community service, the types of folks that brought NDNU to Tracy in the first place, would benefit as well.

“The university itself, when Notre Dame was brought here, it was brought through a consortium. It was a concerted effort of several entities, several people who worked together to bring that here.”

Arriola differentiated between private and public universities, and said the council’s job is to know what each type of university would need.

“With regard to a private university, like Notre Dame de Namur, we really need to be working with our economic development team to ensure that we’re targeting those regional private universities who would be interested in coming out to the Central Valley because of the resources we have available here, the incredible land that we have here.”

He added that the region is underserved by public universities, and San Joaquin County is due for a California State University or a University of California campus.

“What I will commit to is to continue engaging and lobbying with our statewide officials, to go to Sacramento and make sure that this is a priority for the government.”

Wahid said the city needs to make Tracy attractive to educational institutions, adding that attracting companies that specialize in research and development would be a good start.

“First of all let’s fix the infrastructure. The infrastructure is really important and see what kind of connectivity we’ve got, what kind of interface we’ve got. How do people interact with each other? Second, let’s make it a workable place in Tracy. Have people work over here instead of going to the Bay Area and then coming home with no time to go to school,” Wahid said.

Spending of Measure V money, the half-cent sales tax approved by voters in 2016, came to the forefront with a question about support for the Ellis aquatics center.

“If you’re putting all of the money from Measure V into the aquatics center, what about other amenities that are half done?” Sangha said. “What about Legacy Fields, which needs to be finished. What about some other things, like senior centers?”

Young said that Measure V is serving the purpose for which it was intended when she advocated it four years ago.

“We see that Measure V has provided the opportunity for different amenities to service all of our community,” she said, adding that far from ignoring Legacy Fields, the city has devoted about $40 million to that project. Now the city is ready to break ground on the aquatics center.

The candidates also weighed in on Measure Y, this year’s proposal to allow exemptions to the city’s growth management ordinance to allow development near downtown in support of the Valley Link commuter rail line.

Sangha said she looks forward to Valley Link, but is opposed to changing the city’s growth limits.

Young said there is plenty that is positive about Measure Y, Valley Link and transit-oriented development, but ultimately it will be up to the mayor and council to work with whatever voters decide on Measure Y.

“What I’ve learned, if nothing else, on the council is that sometimes you get packages that are not the very best, but you make it the best for you or the best for your community,” Young said. “I leave it to the Tracy residents to decide for yourself, at this time, do we pass Measure Y?”

Arriola supports Measure Y as a way to boost the value of Valley Link and for the potential for it to bring jobs and affordable housing to town. He added that voter approval is a key component.

“When it comes down to it, this is democracy in action. We are bringing this to the voters because you get to decide. You get to decide if this is best for Tracy and the next city council is going to be implementing that.”

Wahid opposes the measure. He said Measure Y is a benefit for existing downtown businesses, but he doesn’t see how the city at large will benefit. He said that while the housing aspect may look attractive he doesn’t feel that voters will see the full impact.

The answer, he said, is that downtown property owners get to see their historic buildings increase in value, and the affordability of downtown homes will decrease as a result.

In response to a question about last year’s San Joaquin County Grand Jury report on the council’s interpersonal relationships and how they affected the council’s effectiveness, Wahid stressed the need for council members to get along even when they disagree.