Starting at
$52.00 for 365 days
Get Started
View all rates
You are the owner of this article.
Edit Article Add New Article
You have permission to edit this article.
Edit
Welcome, Guest
COVID-19 Coverage
News
Voice
Our Town
Sports
Datebook
Obituaries
Advertising
Classifieds
Special Sections
1 of 7 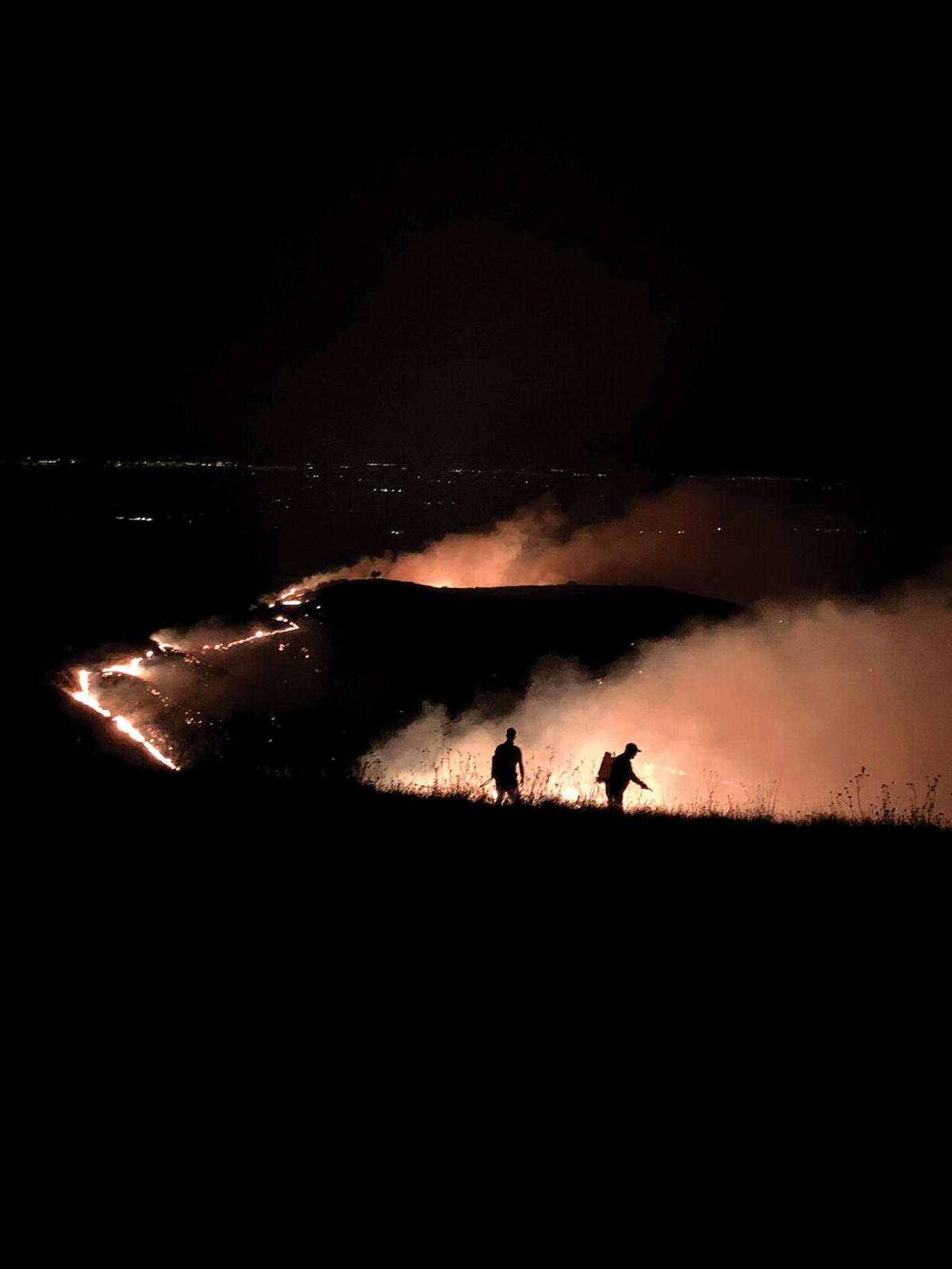 Connolly family members and friends held a fire break along a ridgetop at the Connolly Ranch the night of Aug. 18 as the SCU Lightning Complex Fire continued to spread northward. 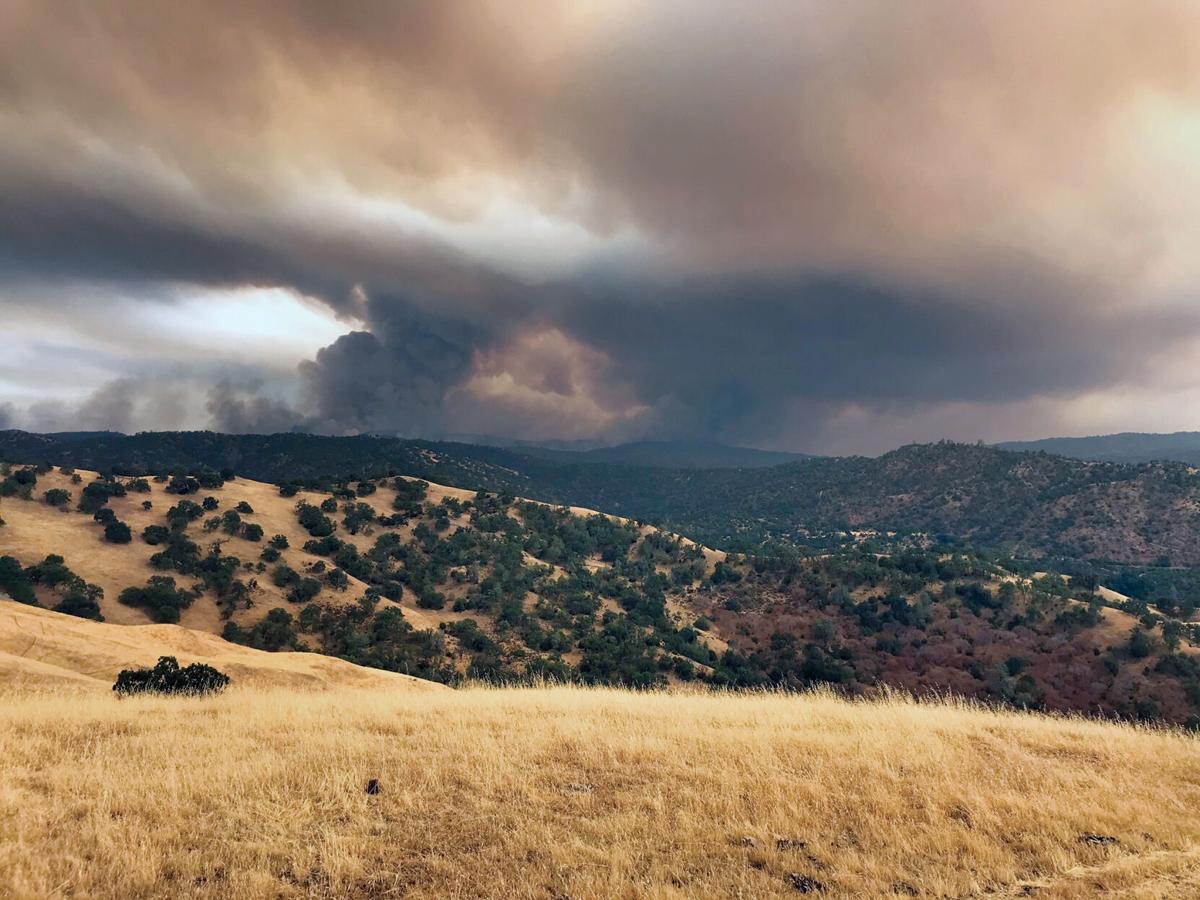 A view from the Connolly Ranch shows smoke from the SCU Lightning Complex Fire to the south of the ranch. In less than two days, the fire would be at the ranch’s property line. 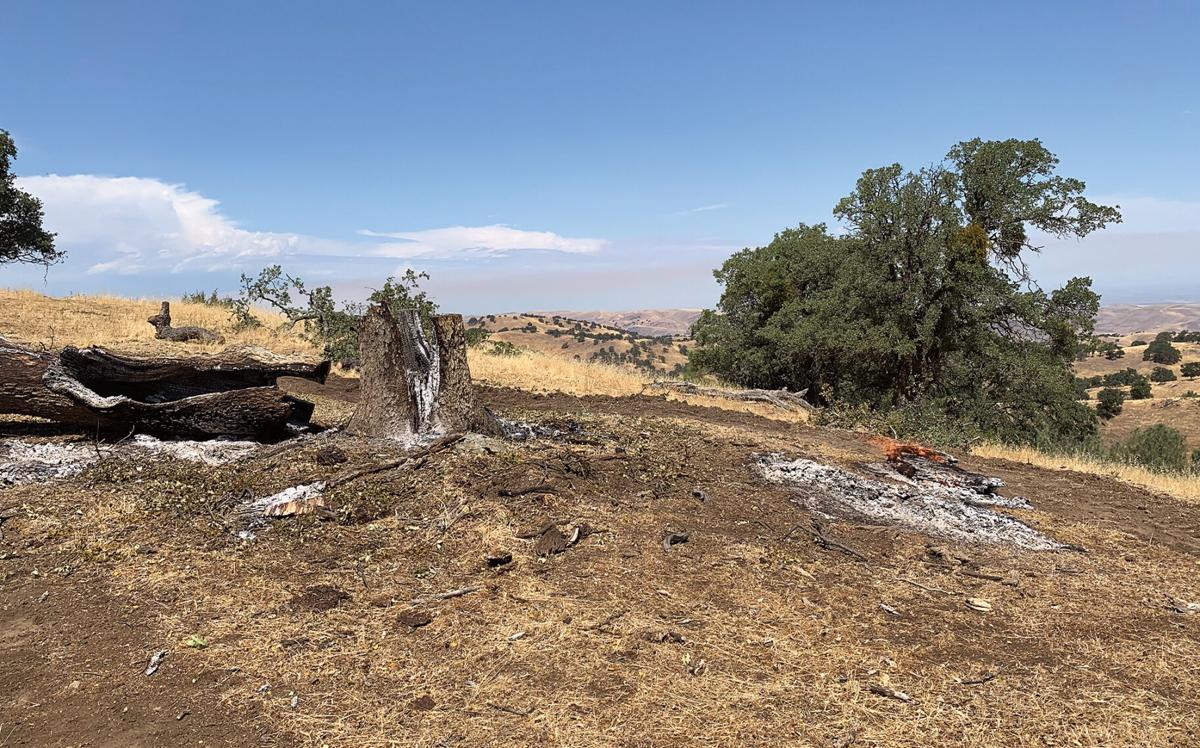 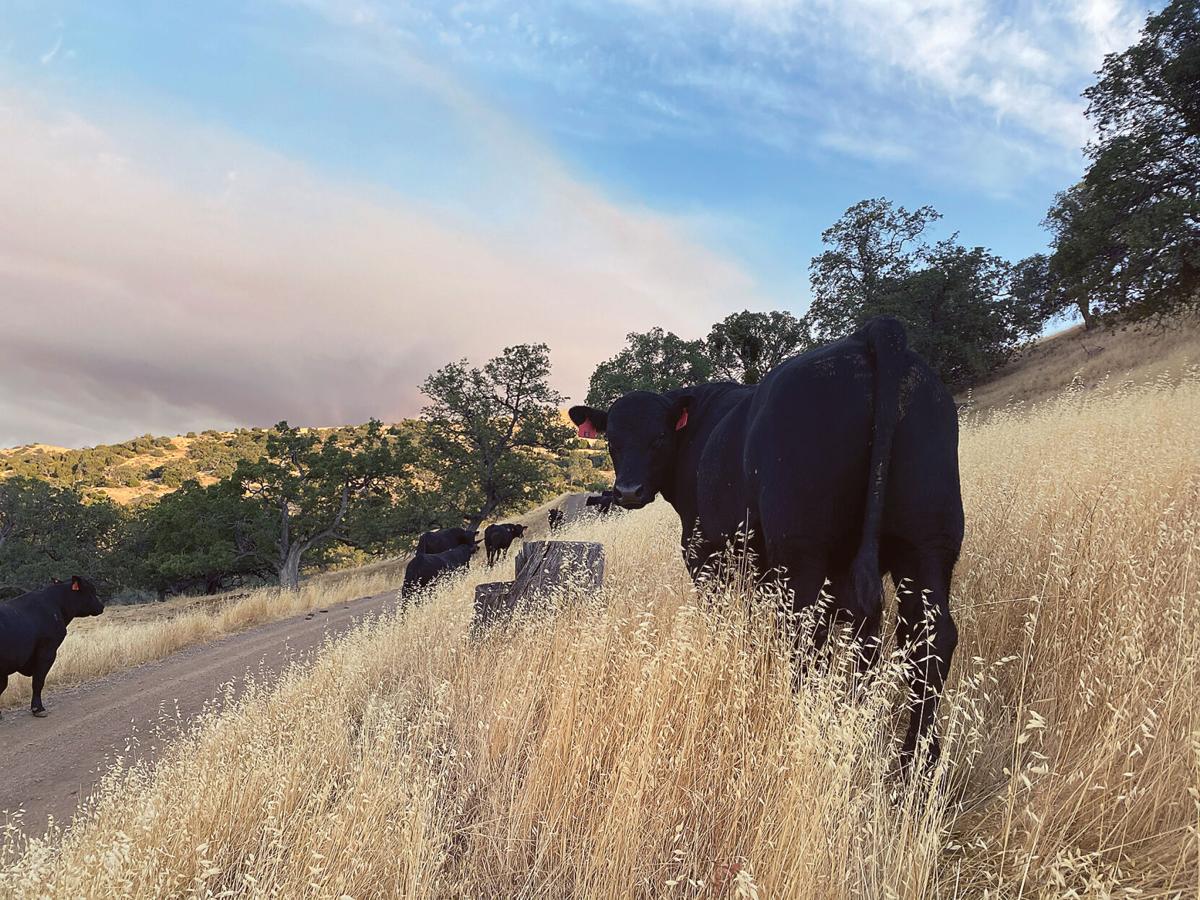 Cattle at the Connolly Ranch move toward safer ground Aug. 18 as the SCU Lightning Complex Fire approaches the ranch. 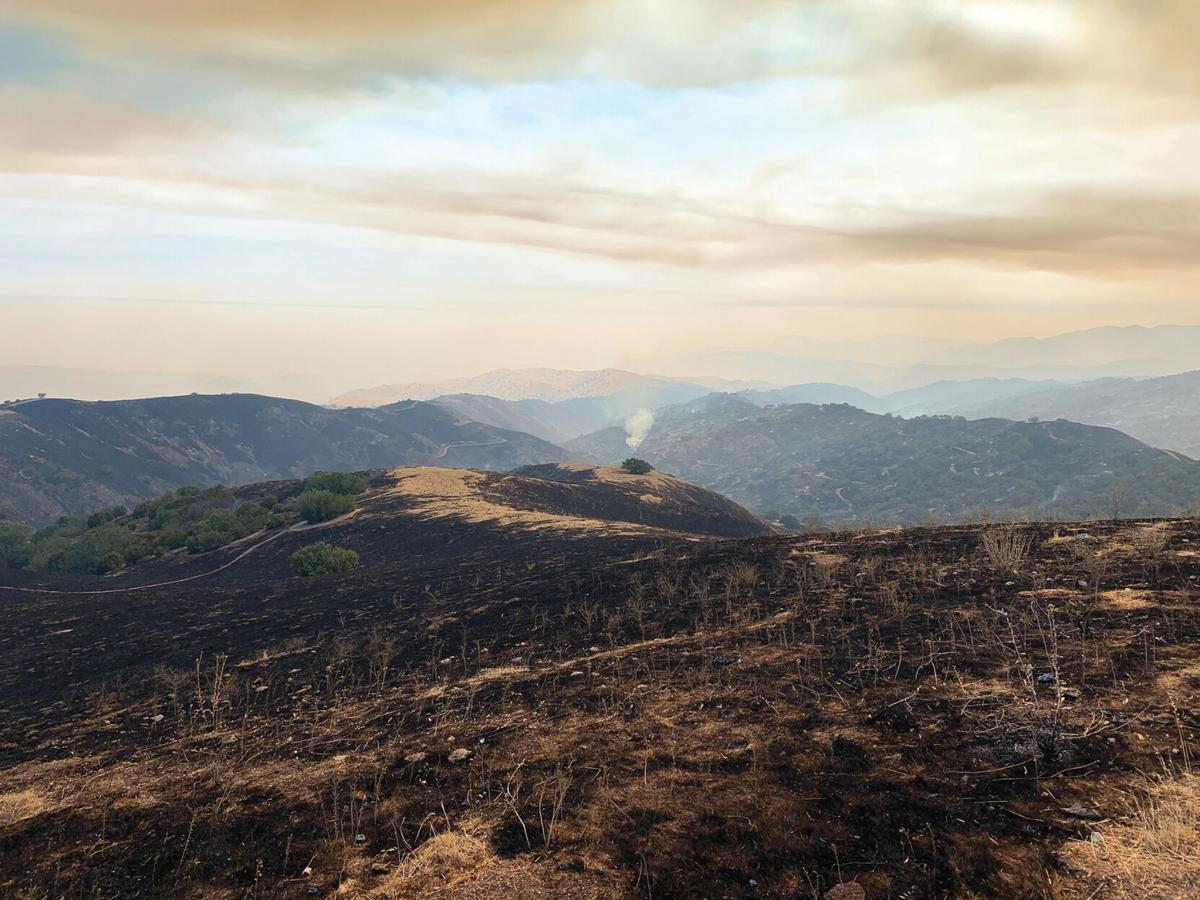 A ridgetop is all charred grass Aug. 20 at Connolly Ranch just south of West Corral Hollow Road at the northern edge of the SCU Lightning Complex Fire. 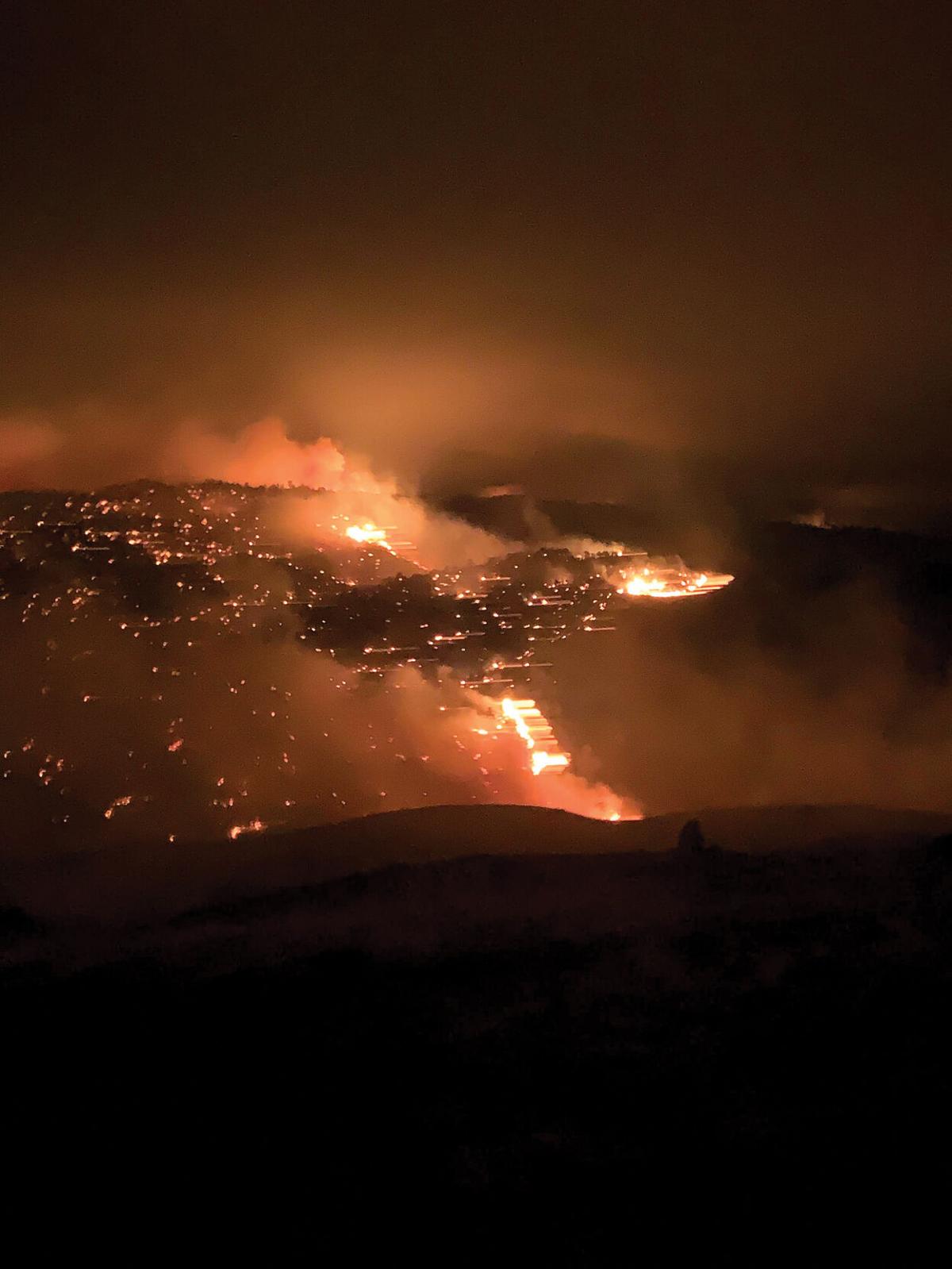 Flames and hot spots dot the landscape at Connolly Ranch the night of Aug. 18 during the SCU Lightning Complex Fire.

Connolly family members and friends held a fire break along a ridgetop at the Connolly Ranch the night of Aug. 18 as the SCU Lightning Complex Fire continued to spread northward.

A view from the Connolly Ranch shows smoke from the SCU Lightning Complex Fire to the south of the ranch. In less than two days, the fire would be at the ranch’s property line.

Cattle at the Connolly Ranch move toward safer ground Aug. 18 as the SCU Lightning Complex Fire approaches the ranch.

A ridgetop is all charred grass Aug. 20 at Connolly Ranch just south of West Corral Hollow Road at the northern edge of the SCU Lightning Complex Fire.

Flames and hot spots dot the landscape at Connolly Ranch the night of Aug. 18 during the SCU Lightning Complex Fire.

For a week after lightning strikes hit the hills southwest of Tracy, Mark Connolly was in a constant scramble to get his livestock to safety, protect his home and guide firefighters to where they needed to be to stop the spread of one of California’s most extensive wildfires ever.

Connolly, in addition to being a local attorney, is the fourth generation of his family to operate the family cattle ranch, Connolly Ranch Natural Beef, on several thousand acres south of Corral Hollow Road straddling the San Joaquin-Alameda county line.

That ranch is at the northern end of the SCU Lightning Complex Fire, and is where the northward spread of the blaze was halted near Bald Mountain and Eagle Mountain.

“We got hit along some boundary fences and some property inside,” Connolly said. “We lost a couple thousand acres and a couple miles of fence. How much is damaged, we have to assess at this point.”

It amounts to loss of grazing land, but no structures on his land were damaged, and the cattle were rounded up and moved safely into their corrals, where they’ve stayed for the past week.

“We weren’t as unfortunate as a lot of people who have to be in the center of that huge area where everything burned,” he said. “We did the usual thing ranchers do. We get our livestock to corral, where they have water and are fire-safe, and get them in there as quickly as we can.”

Cal Fire reported that the SCU Lightning Complex Fire started as about 20 individual fires sparked by thunderstorms the morning of Aug. 16. By Monday, Cal Fire was battling a 350,000-acre wildfire in the Diablo Range of mountains between the San Joaquin Valley and Santa Clara Valley, with the hills just south of Tracy, Livermore and Pleasanton at the northern end, and the fire approaching Highway 152 and San Luis Reservoir at the southern end.

Connolly said that the first warning of danger came as soon as he heard thunder the morning of Aug. 16, including a lightning strike that hit an oak tree.

“That was contained to one tree,” he said. “We knocked it down and got in a water truck. … It takes a couple thousand gallons to actually put out a tree like that. We put that out so that didn’t go anywhere.”

But he could see that more fires were burning a few miles to the south, so he prepared for the flames to head toward his ranch. Meanwhile, fire crews from a variety of agencies showed up to attack the blaze. Connolly and his family and friends did what they could to fight the flames as well.

“We stayed out because it’s not just protecting the house and buildings and structures, it’s trying to get the cattle in the corrals ahead of the fire. The minute the fire hits, we’re trying to keep ahead of it, going from field to field trying to get them to a facility where they’re safe.”

Connolly said the threat of wildfire is a fact of life for ranchers in the Diablo Range. The terrain in the area just south of Corral Hollow Road is made up of hills and steep canyons covered with dry grass, with oak woodlands on the north-facing slopes.

The area also has a network of fire roads that wind along the ridgetops. Connolly said he regularly invites firefighters — including members of Alameda County Fire Department, which has a station at Lawrence Livermore National Laboratories’ Site 300 on rural Corral Hollow Road — out to the area so that they can familiarize themselves with all the access routes.

“The bottom line is, we do a lot of preparation, including making sure our roads are passable, and we map it out for them.”

While Connolly is most familiar with the Alameda County and Cal Fire departments, he had several agencies — some with bulldozers and helicopters — pass through his ranch on their way to fight the blaze.

“The CDF (Cal Fire) has got this down to a fine art, and Alameda County Fire Department is the most aggressive agency,” he said.

The SCU Lightning Complex includes parts of seven counties, and agencies from all of those counties have contributed people to the firefighting effort. As of Monday, Cal Fire reported 1,336 firefighters, 152 engines, 42 water tenders, 23 hand crews, 30 bulldozers and five helicopters assigned to fight the blaze. No fatalities had been reported, but three first responders and two civilians had been injured and 12 structures had been destroyed.

Cal Fire Santa Clara Unit Chief Jake Hess affirmed in a Monday afternoon press conference that the SCU Lightning Complex Fire, at more than 360,000 acres, had become one of the biggest in California’s history.

“We are essentially living in a megafire era,” Hess said. “These significant incidents have been outpacing themselves every year. We have a new incident that is just setting records. You’re looking at the second or third largest fire in the history of California.”

Nearly all of the 350,000 acres of the SCU Lightning Complex are comprised by the Canyon Zone on the eastern side of the Diablo Range, with Tracy on the north end and Patterson to the east, and the Calaveras Zone on the western side of the range, with Pleasanton and Livermore to the north and San Jose, Morgan Hill and Gilroy to the west. As of Monday, Cal Fire was showing that those two zones had merged into one fire zone, which was about 10% contained. By noon Tuesday, fire crews had it 15% contained.

“The fire’s northerly boundary has been completely contained, as well as the majority of this easterly boundary,” Ernst said, pointing on a map to the area just south of Tracy, and then to the hills just west of Interstate 5, near Patterson. “That was a lot of hard work for probably the first four to five to six days of the incident. We’re feeling really confident with this area.”

Ernst said that the fire was still active in the center of the Diablo Range as of Monday, and the fire was most active on the southern end of the Canyon and Calaveras zones, spreading southward toward San Luis Reservoir, Highway 152 and Henry W. Coe State Park.

“A large part of our priority right now is to stop any further southerly movement of the fire,” he said, adding that the No. 1 priority was to keep the fire from spreading west toward Morgan Hill and Gilroy.

As of Monday afternoon, Connolly said it looked as if the fire’s northward spread had been stopped, but he was still cautious about the possibility of new lightning strikes this week.

“This is the first day that we’ve not been scouting for fires. We’ve still have stumps burning up here in various places that we go around and put out,” he said on Monday. “Since that first lightning strike, it’s been nonstop.”

He added that even with all the firefighting crews, bulldozers and helicopters passing through, he could tell that crews would be spread thin once they got to the actual fire lines.

“It was pretty desperate for a while, even last night,” he said. “I don’t want to give the impression that we were overly confident. It was extremely stressful and difficult, and I really feel sorry for the people who were right in a middle of it with just nowhere to go.”

An evacuation warning for areas southwest of Tracy has been lifted, affirming that Cal Fire’s battle against the SCU Lightning Complex Fire ha…