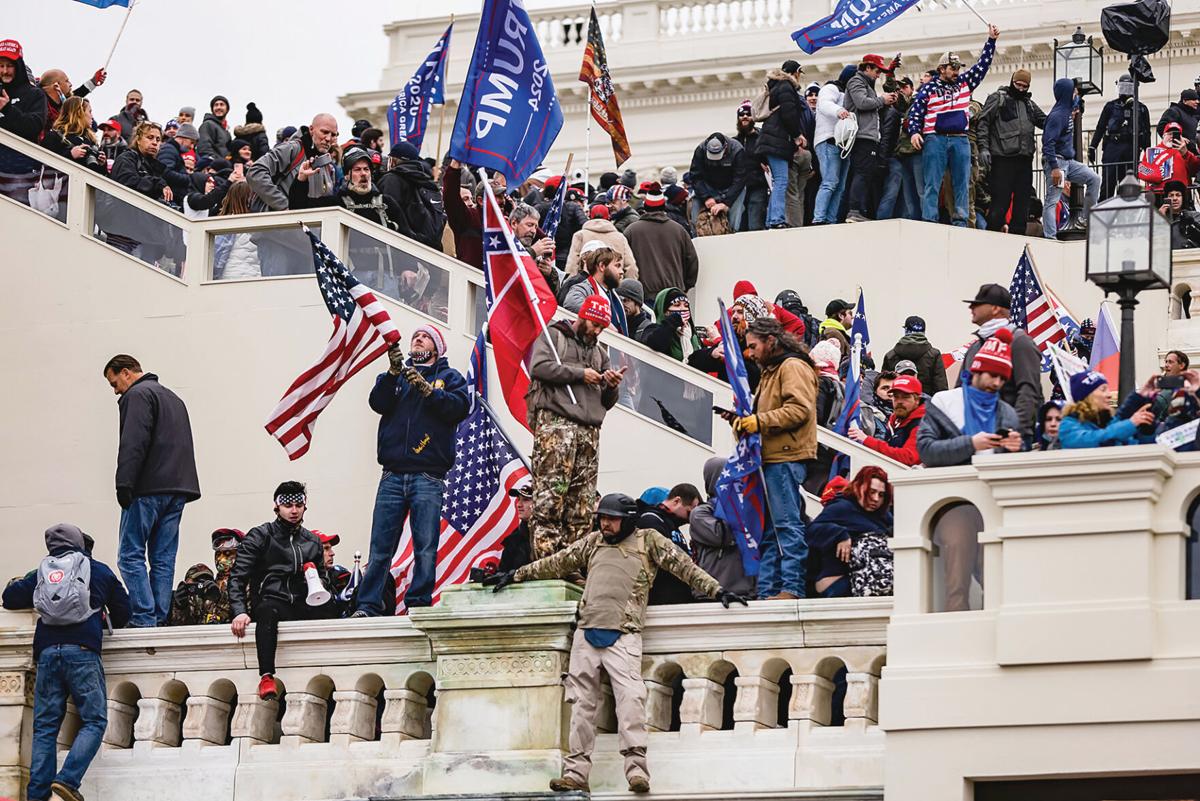 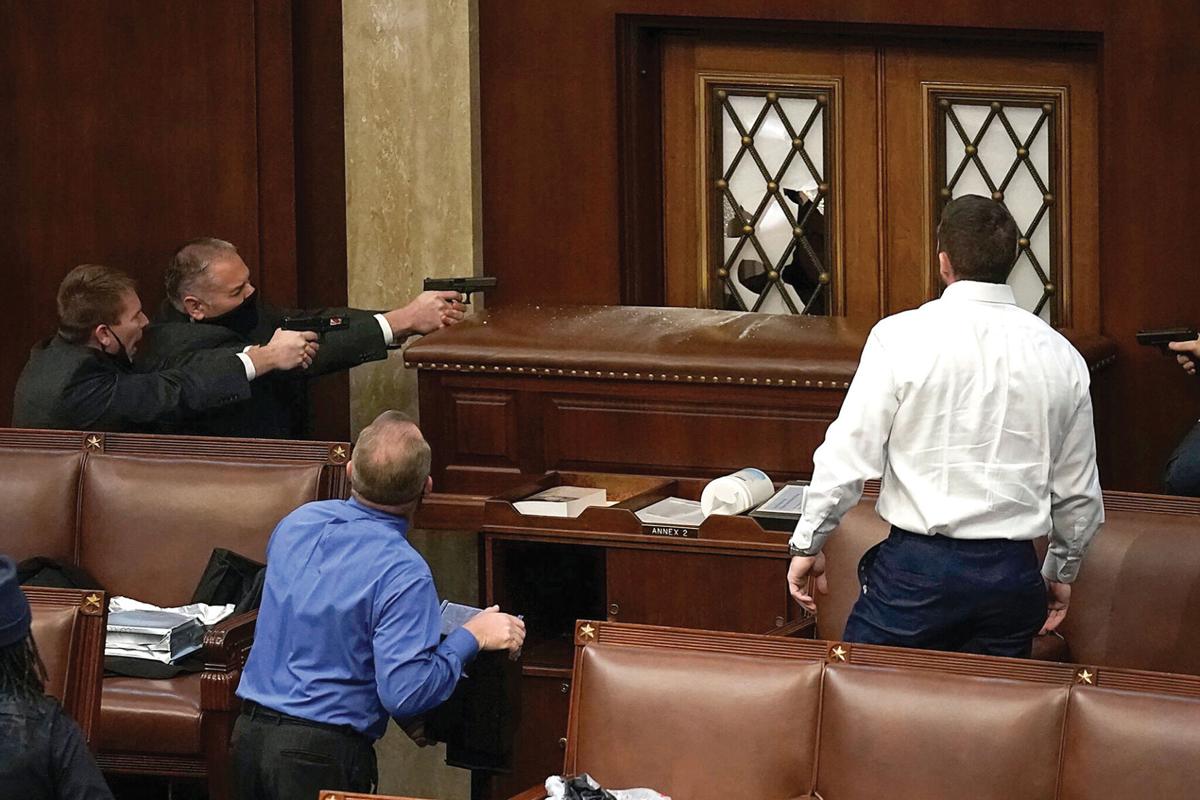 Police officers drew their guns inside the House chamber on Wednesday after pro-Trump protesters broke into the Capitol building and thousands swarmed the steps outside on Jan. 6. 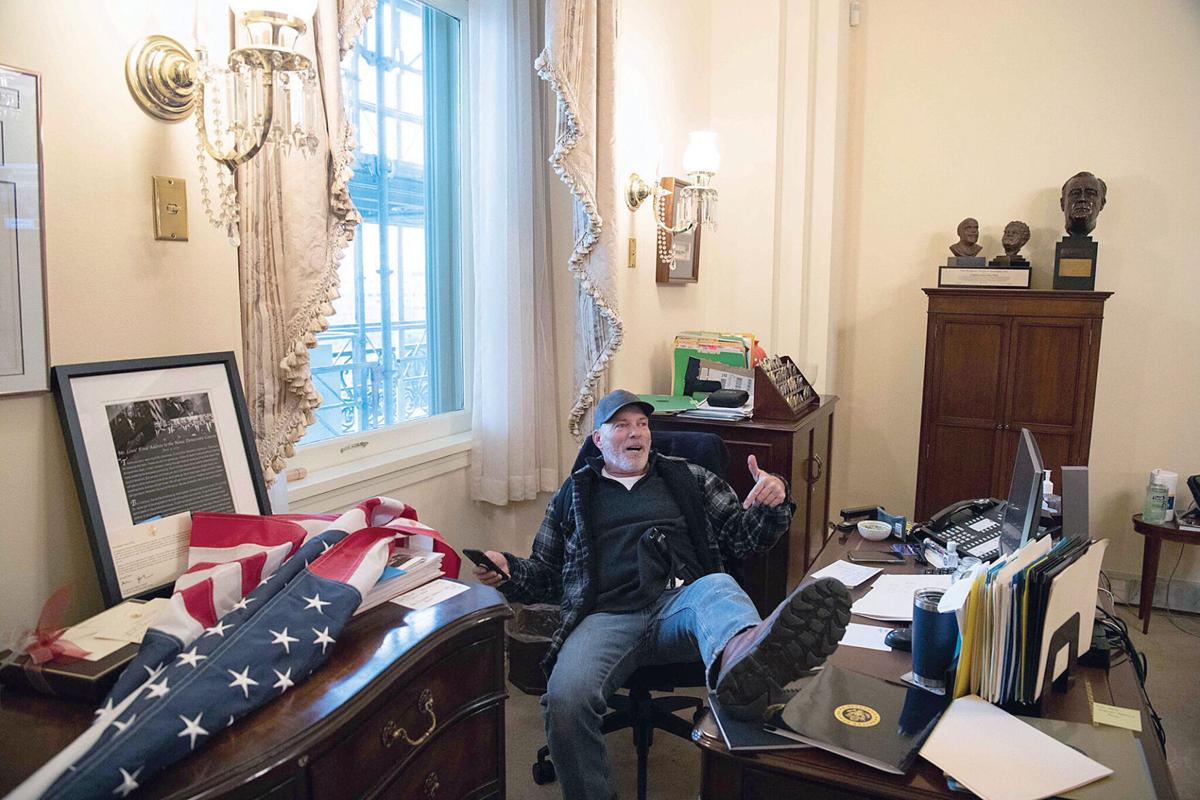 A protester in Speaker Nancy Pelosi’s office, after Pro-Trump supporters invasion in the US Capitol in Washington D.C. on Jan. 6. 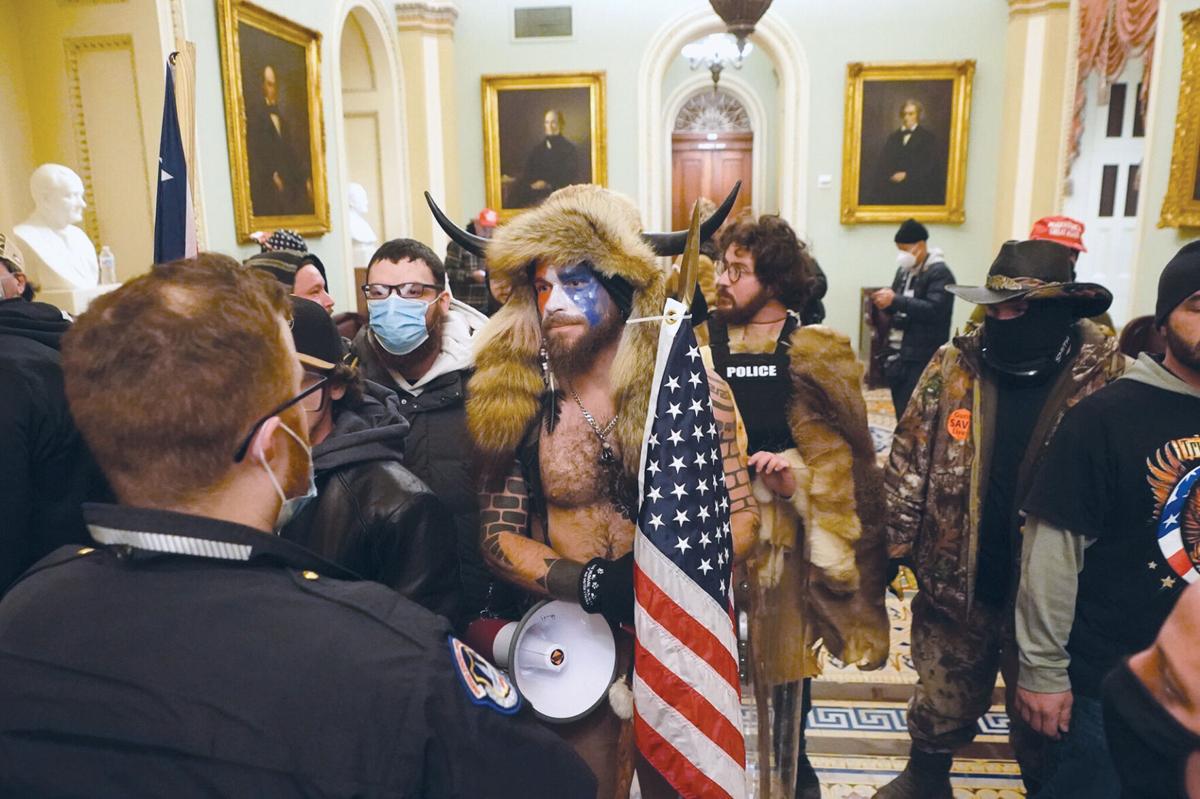 Proud Boys entering the Capitol and stand in front of police officers on Jan. 6.

Police officers drew their guns inside the House chamber on Wednesday after pro-Trump protesters broke into the Capitol building and thousands swarmed the steps outside on Jan. 6.

A protester in Speaker Nancy Pelosi’s office, after Pro-Trump supporters invasion in the US Capitol in Washington D.C. on Jan. 6.

Proud Boys entering the Capitol and stand in front of police officers on Jan. 6.

A protest against the certification of the U.S. presidential election results quickly turned violent Wednesday morning as a mob of Trump supporters stormed the U.S. Capitol during a joint session between Congress and the Senate in Washington D.C.

The Capitol went into official lockdown once rioters reached the legislative chambers where certification was taking place. House Representatives and senators were escorted to a secure location until they could reconvene in chambers later that evening.

The riots prompted the deployment of outside law enforcement, including the Virginia National Guard, in order to maintain order in the area. Fifty-two arrests were made and at least four people were reported dead from the events that took place, including a San Diego woman that was fatally shot. Law enforcement also found at least one pipe bomb on Capitol grounds.

Central Valley representatives Josh Harder (CA-10) and Jerry McNerney (CA-9) sent out social media statements during the chaos to assure their constituents that they were out of harm’s way.

“Violence has no place in our democracy. I wanted to let you all know I am sheltering and safe. Thank you to all the Capitol Police officers defending my colleagues and our Capitol,” Harder posted.

Harder also shared a photo of one of the damaged windows caused from the riots and a video later that evening and said he would not be intimidated from "continuing the work of our democracy" by the incident.

"Tonight we vote to finish this election season. There's broken glass on the floor and rioters outside — but tonight this is finally over," he posted.

The riots took place right after a rally that was held by President Donald Trump the same morning. According to video footage, Trump reiterated the rhetoric that the election was stolen by the Democratic Party and encouraged his supporters to “walk down to the Capitol.”

Videos and photos of rioters vandalizing the Capitol Building, taking selfies in the chambers and squatting in Speaker Nancy Pelosi's office circulated around the internet.

The crowd dispersed near 6 p.m. that night, when an emergency curfew had been put into effect. Trump also released a, now deleted, video on social media, asking his supporters to go home but still insisting that the election was stolen.

One post said, "These are the things and events that happen when a sacred landslide election victory is so unceremoniously & viciously stripped away from great patriots who have been badly & unfairly treated for so long. Go home with love & in peace. Remember this day forever!"

The other deleted post condemned Vice President Mike Pence for not using his powers in the Senate to overturn election results — a move that he legally did not have any power to do.

Trump has now been temporarily locked out of Facebook and Twitter until at least after Inauguration Day. Mark Zuckerberg, Founder and CEO of Facebook said that the company had allowed Trump to continue using his platforms (Instagram and Facebook) so the public could continue to have access to political speech but the current context was now fundamentally different, as the president had incited "violent insurrection against a democratically elected government."

"We believe the risks of allowing the President to continue to use our service during this period are simply too great. Therefore, we are extending the block we have placed on his Facebook and Instagram accounts indefinitely and for at least the next two weeks until the peaceful transition of power is complete," said Zuckerberg.

In the statement he put out on social media, McNerney called for those responsible for inciting and participating in the riots to face consequences, "starting with a call for the application of the 25th amendement to remove this dangerous man from office."

"This brazen attempt to overthrow a free and fair election has been inspired and encouraged by Trump, with a large number of my Republican colleagues either fueling the flames or standing by without condemnation. This line of incitement has finally resulted in violence and is a strike to the heart of our democracy. This is sedition," McNerney said.