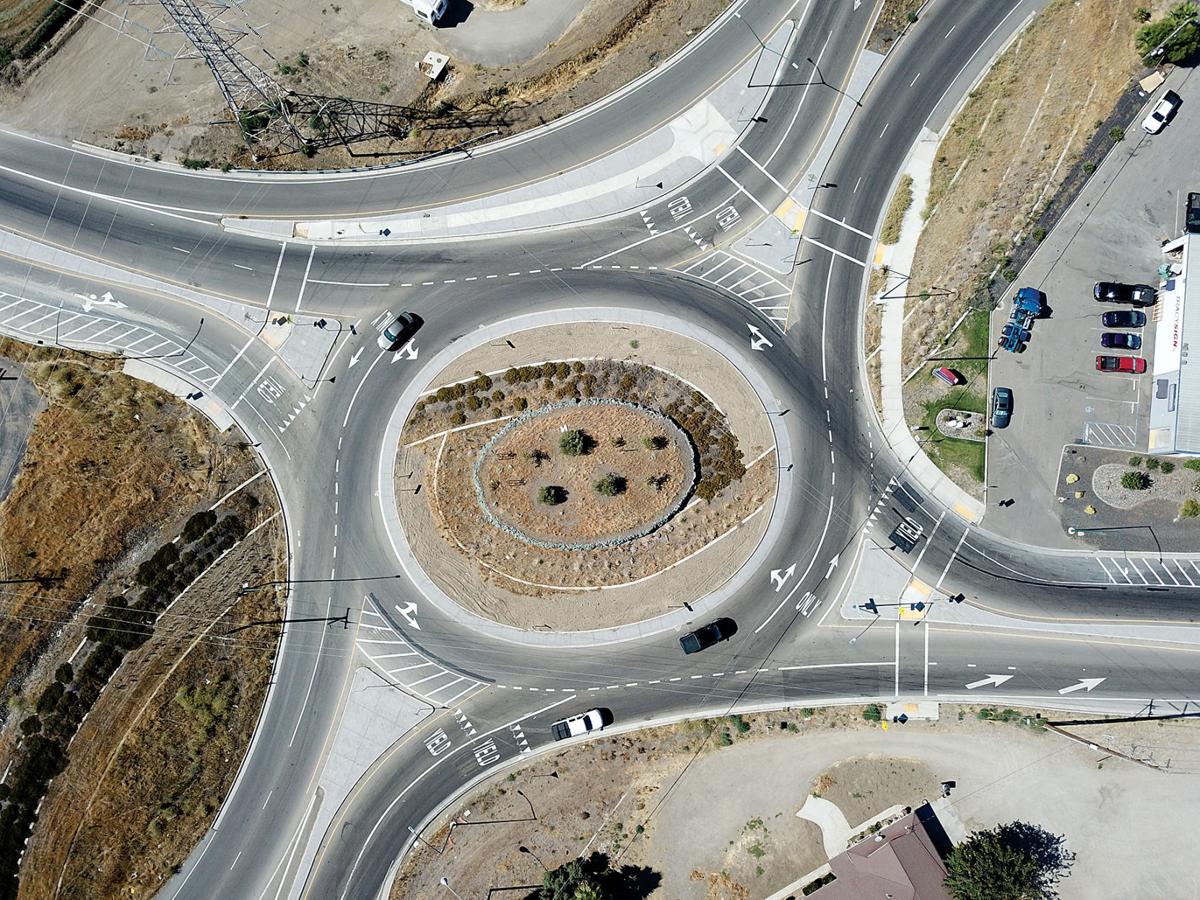 Drivers navigate the modified 11th Street roundabout, as seen in an aerial picture taken Monday. Striping that closes off parts of a lane can be seen next to both directions of 11th Street. 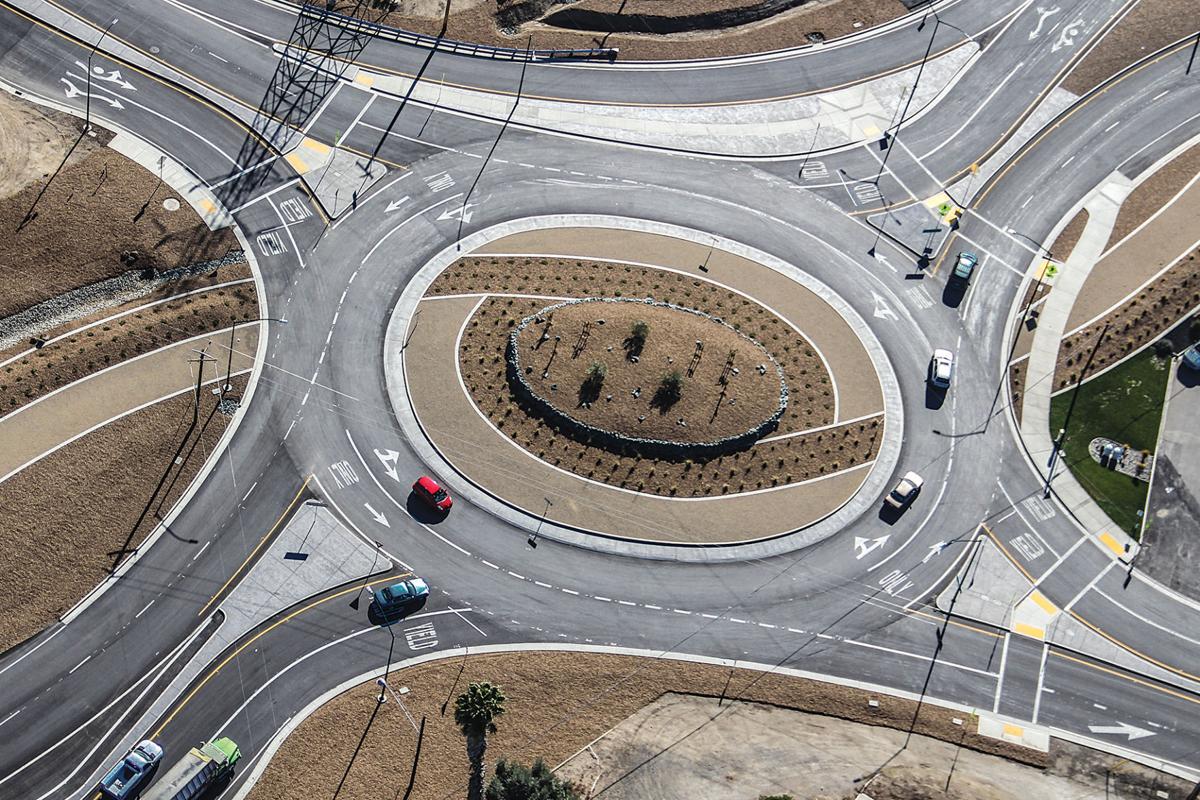 Traffic moves around the 11th Street roundabout shortly after its opening, as seen in an aerial picture from November 2012.

Drivers navigate the modified 11th Street roundabout, as seen in an aerial picture taken Monday. Striping that closes off parts of a lane can be seen next to both directions of 11th Street.

Traffic moves around the 11th Street roundabout shortly after its opening, as seen in an aerial picture from November 2012.

One lane of the 11th Street roundabout at the intersection of Grant Line and Kasson roads has been removed in an effort to make it less confusing.

Mike Selling, deputy director of San Joaquin County Public Works, said the county has been working to help drivers safely navigate the 160-foot-diameter roundabout that replaced a four-way stop at the intersection in late 2012.

“When that roundabout was designed and constructed, there wasn’t the vast amount of warehousing and activity to the west,” Selling said, citing the Amazon fulfillment center on Chrisman Road and other businesses in the city’s Northeast Industrial Area that have increased truck and commuter traffic.

The roundabout was originally designed as what Selling called a two-by-two — two lanes around the circle with two lanes of traffic entering from each direction of 11th Street, Grant Line and Kasson roads.

Records provided by the county public works department, which maintains the roads outside city limits, show that there were 98 reported accidents that caused property damage and 14 that caused injuries between January 2013 and June 23 of this year.

“Looking at that, we were getting a fairly frequent number of fender benders — low-speed accidents, no injuries, mostly just property damage,” Selling said. “But it seemed a lot of it was occurring due to either driver confusion kind of thing or folks try to pass each other inside the roundabout.”

Trucks could enter both lanes of the roundabout, and as they made a turn, other drivers would often try to cut around them, causing accidents.

The solution, he said, was to change the roundabout to what he called a two-by-one layout. Two lanes of traffic still enter from 11th Street, but drivers approaching from Grant Line or Kasson can only enter from one lane. The roundabout was restriped in late June, and new signs reflect the change.

“By reducing it to one lane, then you don’t get anybody try to cut around,” Selling said, “and then for 11th Street traffic, when they look to their left they are only needing to be concerned with — anybody coming has to come in that one lane, so they essentially have the outside lane free to enter the roundabout.

One concern was that removing a lane might hinder the flow of traffic, but Selling said the impact was “very minimal.”

Another roundabout is coming to the Tracy area soon on a trial basis. Within four to six weeks, the county public works department will put in a temporary roundabout at West Grant Line and Byron roads, northwest of the city. Workers will pave some areas of the intersection, place barriers to shape the roundabout and add new lane markings.

“If people don’t like it or it doesn’t work, then we can put the stop signs back in,” Selling said.

Drivers can expect to see more roundabouts popping up around the county, and Selling hopes people will see the benefits.

“They improve safety because they slow the traffic down,” he said. “If you do have somebody either get confused or not paying attention, it’s a much lower speed accident if it occurs and chances are it is minor injuries if at all — mostly more vehicle damage — versus someone trying to run a red light at 40-50 miles an hour and someone dies or is severely injured.”

Selling said he understood that some drivers disliked roundabouts but urged them to “keep an open mind.”

“Roundabouts really do improve the safety because they force traffic to slow down, but the beauty of them is, unlike a stop sign or a stoplight where you will have two directions of traffic moving, with a roundabout when it’s done right you can have all four directions moving, so it ends up being faster,” he said.

Click here for the county public works department website with videos, tips and other information for drivers who use roundabouts.

Accidents at the 11th Street roundabout

The following statistics were provided by San Joaquin County Public Works for the roundabout on 11th Street at Kasson and Grant Line roads.

Roundabouts perform well at intersections that require traffic assistance in areas with light traffic. W. Grant Line and Byron Rd is a heavily traveled roadway. A roundabout here will cause more problems with traffic. At times traffic is heavy in one direction. This will slow traffic in the other two directions causing some drivers to force their way into the roundabout. This can cause accidents and road rage. Also, will this be two lanes or one? If two, look at the problems at 11th St and Grant Line. Leave the stop lights. Keep the controlled left turn lanes at w/b Grant Line and s/b Byron Rd. No U-turns. When w/b Grant Line left turn is utilized have a green right turn arrow activated at n/b Byron Rd to e/b Grant Line.