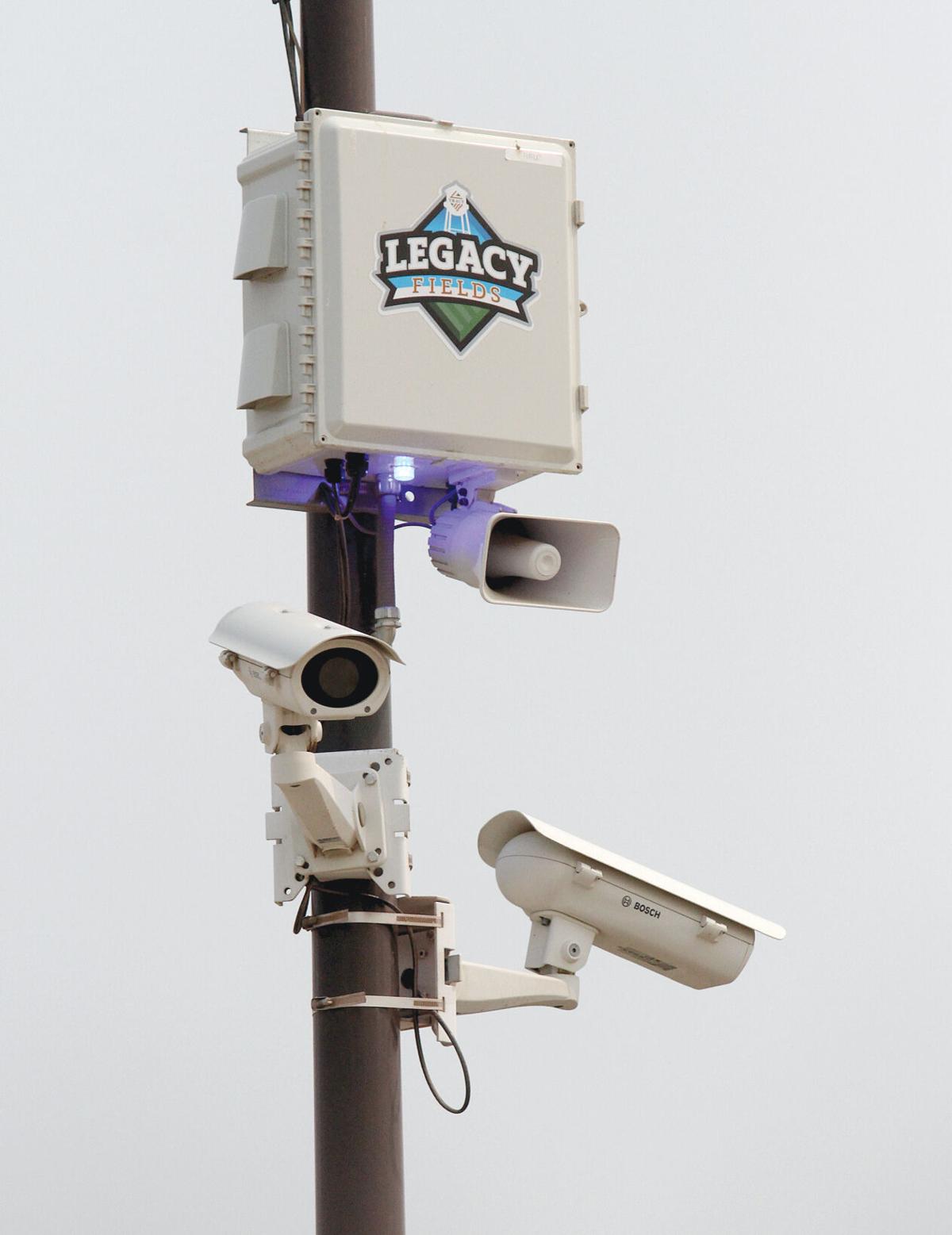 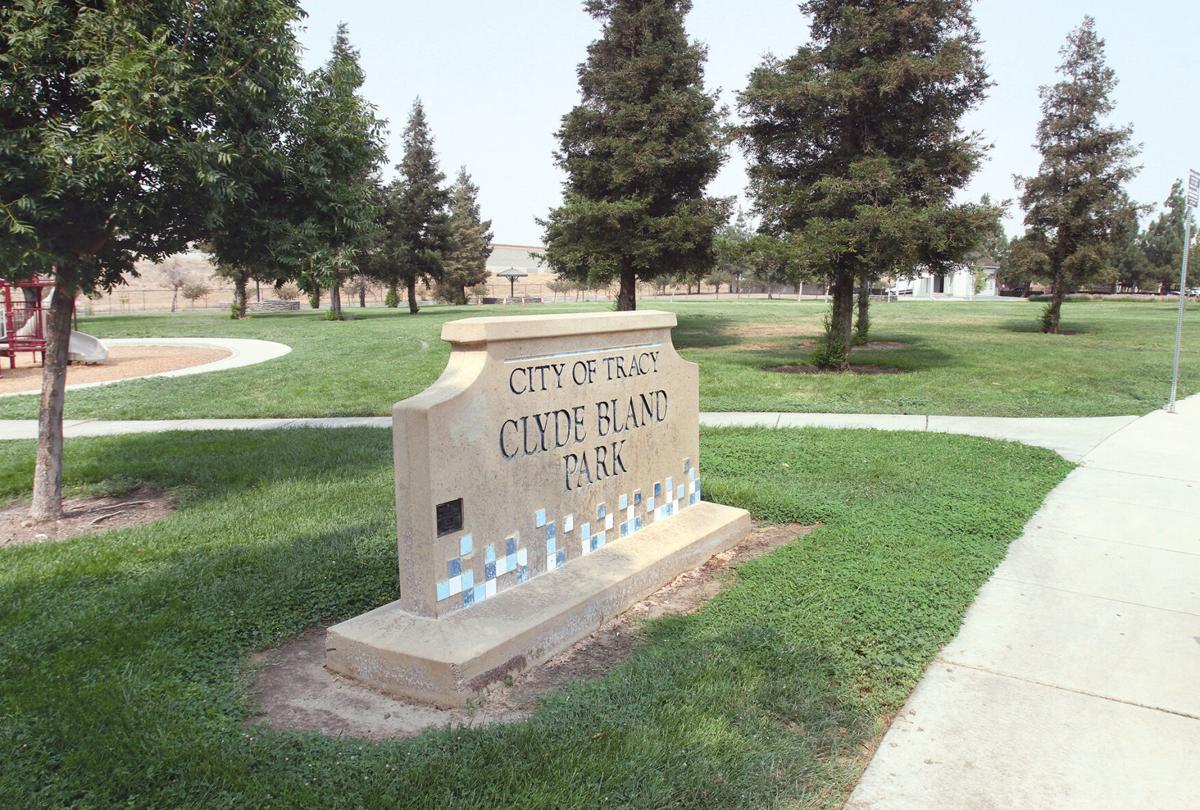 Clyde Bland Park off Lowell Avenue will be the first city park to have security cameras installed as part of a new program. 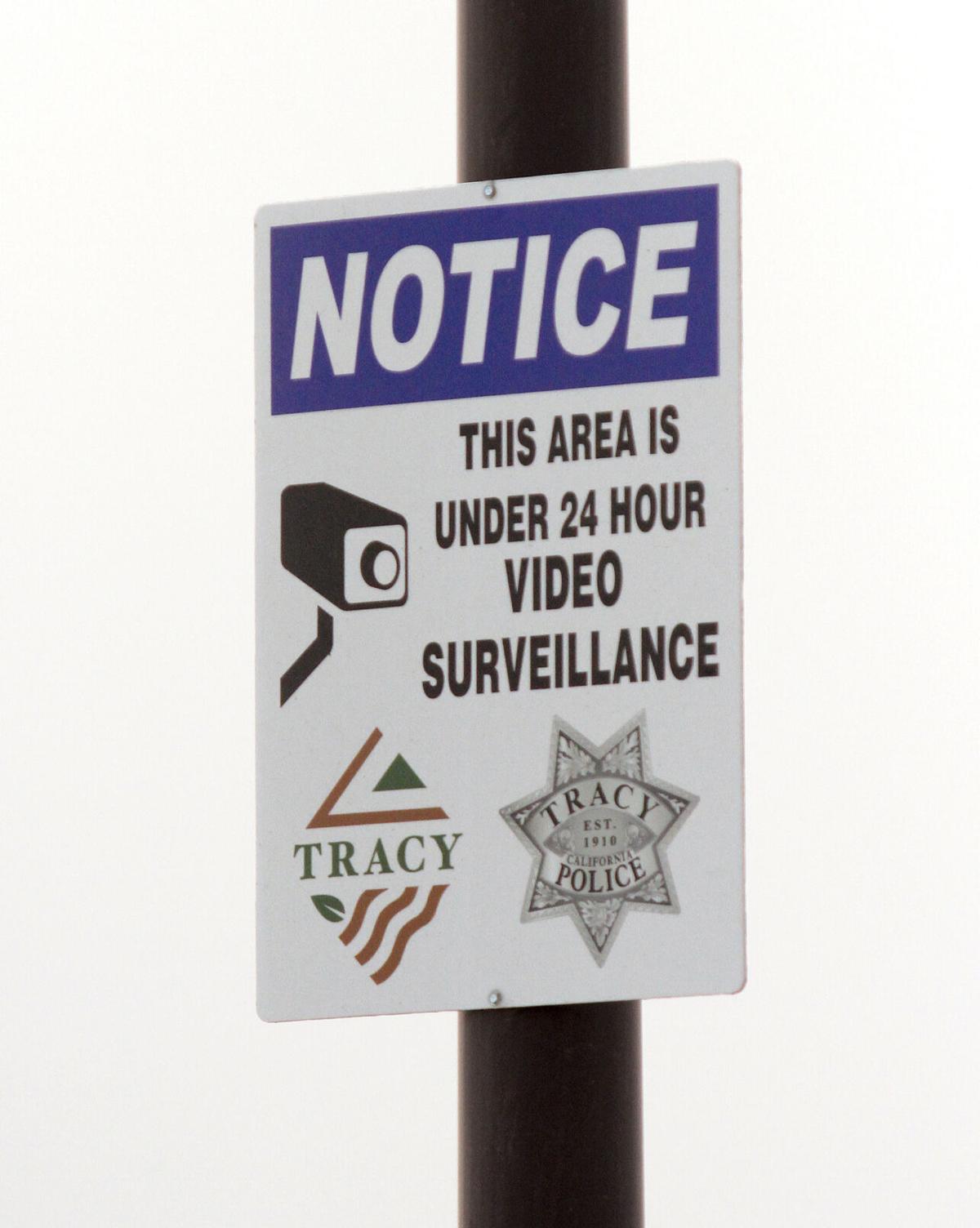 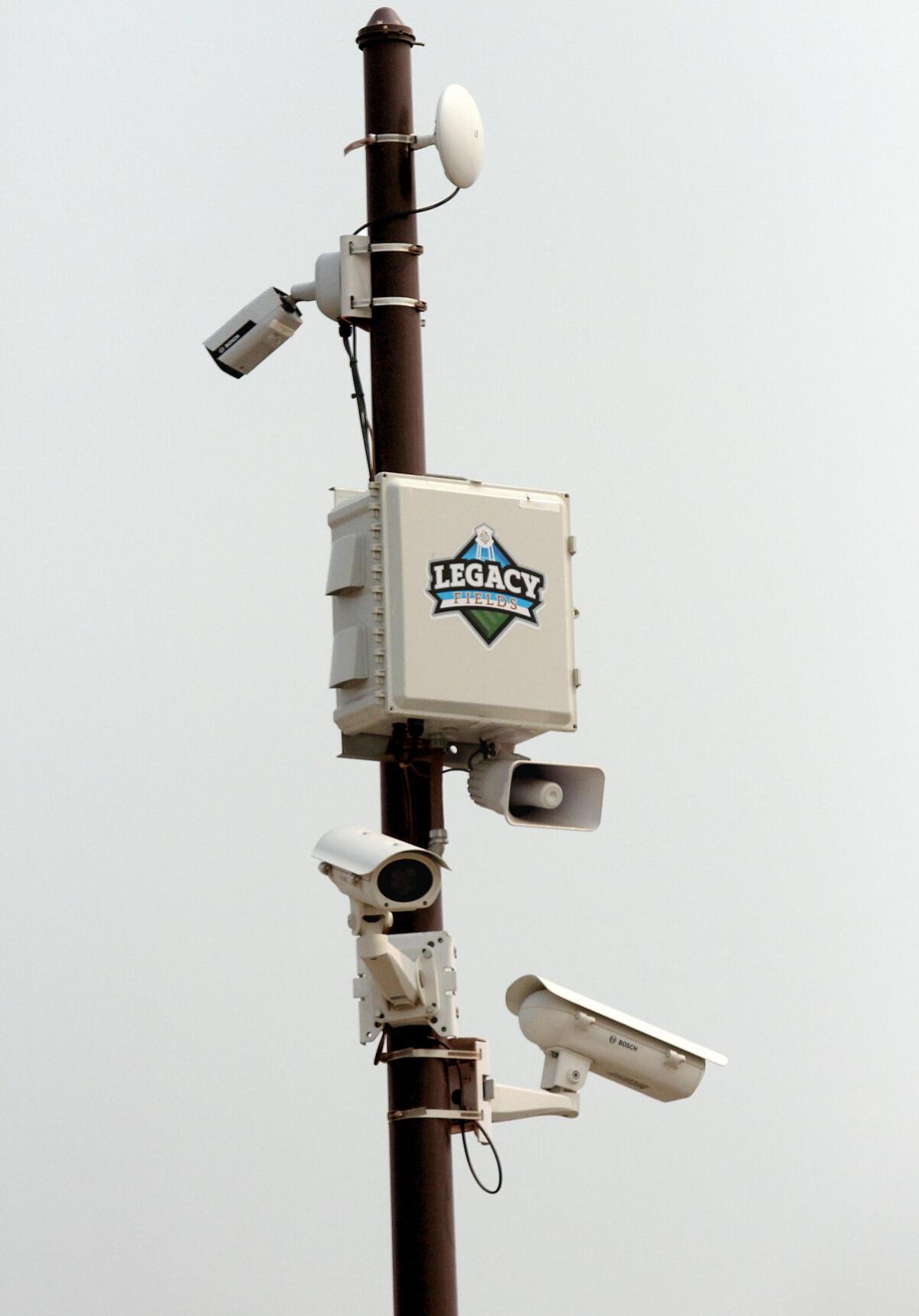 Clyde Bland Park off Lowell Avenue will be the first city park to have security cameras like these at Legacy Fields installed as part of a new program. 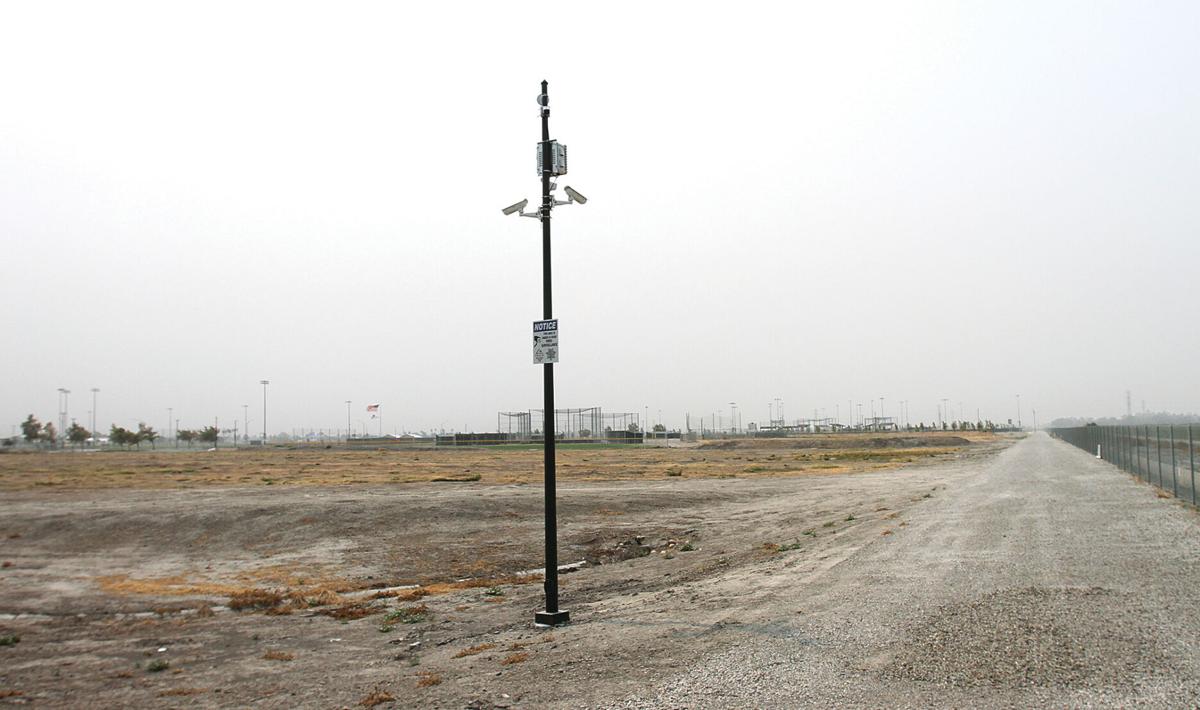 Security cameras watch over a section of Legacy Fields on Tuesday afternoon. Similar cameras will be installed at city parks as part of a new program.

Clyde Bland Park off Lowell Avenue will be the first city park to have security cameras installed as part of a new program.

Clyde Bland Park off Lowell Avenue will be the first city park to have security cameras like these at Legacy Fields installed as part of a new program.

Security cameras watch over a section of Legacy Fields on Tuesday afternoon. Similar cameras will be installed at city parks as part of a new program.

A new surveillance camera program looks to keep an eye out for illegal activity in city parks across Tracy.

“We want to make our parks are a safe place that’s welcoming, that creates memorable experiences, and that’s my goal for this camera project,” MacDonald said. “We did a community survey that’s tied to our Parks Master Plan and safety concerns was one of the major barriers for visiting our local parks.”

Camera were installed at Clyde Bland Park at the end of West Lowell Avenue next to Interstate 205 earlier this week and are scheduled to be installed in the next few months at Dr. Powers Park, El Pescadero Park, Lincoln Park and Talley Park. The city hopes to have the cameras at Clyde Bland Park up and running sometime next week.

The city had tried installing security cameras about 10 years ago at Jim Raymond and Gretchen Talley parks. Recently a video surveillance system was installed at Legacy Fields at the north end of town as a test project for the parks camera program.

“That was in response to a lot of concerns we had out there about vandalism and the fact that the facility is out in the middle of nowhere and we really can’t have eyes out there a lot, so we thought it was a more efficient way to utilize city resources rather than having city staff and or police officers out there patrolling every hour,” MacDonald said.

Part of the issue why cameras weren’t used earlier was the availability of funds. The new city budget that the Tracy City Council approved in June included funding for security cameras in parks.

The city will lease the cameras for $175,000 per-year from IntelliSite, which will also provide monitoring, maintenance and replacement. That cost covers the first five parks. The city has already purchased that cameras in use now at Legacy Fields.

Tracy Police Chief Sekou Millington said he was fortunate the city had already begun the process to add the cameras to the parks when he joined the police department.

“I have always been a fan of technology. I’m a fan of efficiency. It gives us an opportunity in law enforcement to be proactive as opposed to reactive.” Millington said. “We’ve looked at the data, we’ve looked at the stats. There’s work to be done at the parks. These cameras will help us. Often we don’t have that real-time information, that citizen information.”

The five parks that will receive the cameras in the first phase of the program were selected for a multitude of reasons including calls for service, citizen complaints, officers’ observations, level of activity such as nuisance calls and homelessness, and the required infrastructure to allow the cameras to be installed.

“These cameras are unbiased, independent eyes that help us with real-time information. Ideally we can prevent crime from occurring. Worst-case scenario, we can’t get there fast enough or there is a miss, we have the opportunity to have at least some type of evidentiary item to do some immediate follow-up on.”

Clyde Bland Park had one the largest homeless encampments nearby on the Caltrans right of way. That camp was recently cleaned out during the recent heat wave. Gates were repaired and fortified, and new fencing installed after the homeless departure. Millington said installing the cameras will help keep that area clear.

“It was an opportunity to strike while the iron is hot. That project had just gotten wrapped up and so as to not let that space be reoccupied this part of that phased project … we had the capability, we had the vendor on hand and as a group we thought it would be the best bang for our buck,” Millington said.

The old Lammersville School house had received numerous complaints about vandalism and loitering and the facility not being safe for students.

“We just simply don’t have enough eyes on it and whether it’s adding city facility attendants or the chief needs to send some of his officers, we just don’t think it’s a good use of our time so cameras help mitigate that,” MacDonald said.

The cameras will be monitored by IntelliSite and are equipped with motion sensor technology. The company will be connected to the police dispatch center to alert them if a camera is triggered by suspicious activity and they will be monitored during significant events.

“If there is an event occurring that we can prevent we will get there sooner because this third party is in a sense monitoring the activity,” Millington said. “It’s not going to be on a 24/7 basis, but the technology of these cameras is such that we have infrared features where nighttime is just as good as daytime.”

A blue light indicator will blink on the camera to let people know the park is under video surveillance.

The cameras will record video 24/7 no matter if they are being monitored or not. Recorded video will be stored for two or three months.

MacDonald said the number of cameras at each park will depend on ability to place them near existing power and in a secure location to deter the opportunity for vandalism and theft.

At Clyde Bland Park there may be from five to eight cameras placed throughout the park.

“The goal is to have the cameras cover 100% of the park,” MacDonald said.

Millington said the cameras will help deter crime in the parks.

“I think this is a huge investment. I hope the conversation is about having the community re-own space they should have access to — the skate parks and the dog walks, the jungle gyms — and not have to deal with some of the blight issues, some of the crime issues that we’ve had historically especially at the city parks which is a priority for the phased approach,” Millington said.

While some people may have privacy concerns the police chief said the cameras are not intended to watch residents in their homes and won’t infringe on anyone’s rights.

“Public space is public space when it comes to cameras and surveillance, so the idea is not to point it at anyone’s home but to make sure we are able to capture the entirety of the park,” Millington said. “This is about public space, public right of way. Making sure we have ingress, egress routes. Really a sort of deterrent. I think half the battle is if folks know these cameras are up the bad activity will not happen.”

Millington thought especially in light of the pandemic the parks have been one of the hubs for family activities for people who have been stuck in their homes.

The city will conduct outreach to the neighborhoods around the parks with cameras to notify residents of the new security system. Signs will be posted to tell visitors the park is under constant video surveillance.

“These are public parks; these are community spaces and it’s really going to be on the community to make it what it is. They are the first eyes on when there are issues and as a city we want to be a force multiplier and help them with those observations and be able to react faster,” Millington said. “My number one priority is public safety. Whether it’s technology or human observation what I want to do is mitigate any sort of recurring crimes that occur there, future crimes that might occur there and this technology is the best of both worlds.”