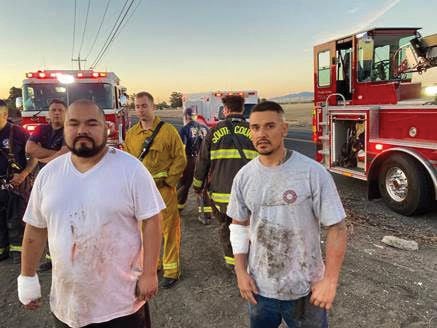 Jorge Mendoza (left), Daniel Miranda and a third man whose name is unknown rescued a woman from a car submerged in an irrigation canal off West Schulte Road west of Lammers Road on Wednesday morning. 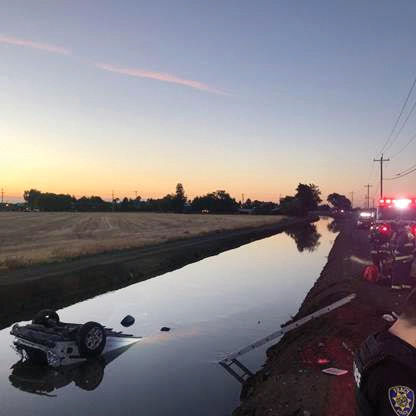 Three bystanders rescued a woman from a car that fell into an irrigation canal off West Schulte Road west of Lammers Road on Wednesday morning. 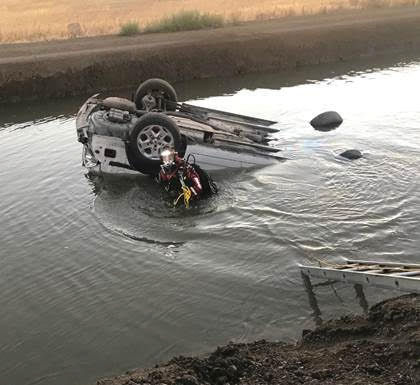 A diver checks a car for any other victims Wednesday morning after it crashed into an irrigation canal off West Schulte Road west of Lammers Road.

Jorge Mendoza (left), Daniel Miranda and a third man whose name is unknown rescued a woman from a car submerged in an irrigation canal off West Schulte Road west of Lammers Road on Wednesday morning.

Three bystanders rescued a woman from a car that fell into an irrigation canal off West Schulte Road west of Lammers Road on Wednesday morning.

A diver checks a car for any other victims Wednesday morning after it crashed into an irrigation canal off West Schulte Road west of Lammers Road.

A 20-year-old woman from Livermore was saved from drowning Wednesday by three men who pulled her from a car submerged in an irrigation canal off West Schulte Road.

Jorge Mendoza, Daniel Miranda and a third, unidentified man saw the car crash into the water just before 5 a.m. and stopped to help.

A news release from the South San Joaquin County Fire Authority says firefighters were told about a car overturned in an irrigation canal on Schulte Road west of Lammers Road. Along with local firefighters, water rescue crews from the Lathrop-Manteca and Stockton fire departments were sent to help.

Miranda, 28, saw the woman’s car lose control rounding a curve as he was on his way to work as a union steelworker at a job site off Patterson Pass Road. The car hit the canal bank and launched into the air, turning over several times before it rolled into the water roof down.

He and the two other men stopped their cars as dust settled around the canal bank.

“We were just kind of like, all right, who’s jumping in,” Miranda said.

Mendoza, 38, was driving to work at the Costco Wholesale Meat Plant on Schulte Road when he saw the car heading east veer across the road toward the irrigation canal.

”There’s a couple of cars in front of me, and I sort of saw this car, and the light — it just, boom, right into the canal,” he said.

The car landed upside down in about 5 feet of water and slowly settled to the bottom.

Mendoza went into the canal and ducked under the water with a survival knife he carries whenever he’s driving. He had never expected to use it on somebody else’s car.

“It has a little thing on the end where you can break the glass and it also has a seat belt cutter,” Mendoza said. “I got that knife for that reason. I’ve always thought, if I fell into some water or something in my car, I’d break the windows and hopefully cut the seat belt, but I never thought anything like this would happen.”

He broke three of the windows and then had to come up for air.

At the canal bank, Miranda could hear the car’s horn blaring underwater. He scanned the area around the car for anybody who might have been thrown from the car as it flipped into the water. Then his emergency training as a steelworker kicked in.

After Mendoza broke the window glass, Miranda jumped into the water and reached through the driver’s side window.

“I was trying to feel around for a body or anything,” he said. “I felt the body — I felt the woman’s arm — and I grabbed her and I started to pull her out.”

Miranda and Mendoza got the woman out of the car, and Miranda tried the Heimlich maneuver to dislodge anything blocking her throat, but he didn’t get any response. The woman was unconscious, he said, and he couldn’t tell if she was breathing.

“I had a feeling like I could feel her soul,” Miranda said. “I felt her soul around me, and it was telling me, ‘Save me, save me.’ It was a crazy feeling I’ll never forget.”

They carried the woman from the canal embankment, and a third man started CPR chest compressions.

Miranda went back into the water to check for anyone else who might be in the car, which was settling into the mud of the canal bed. When he came back out, the woman began to cough and breathe again.

“Very faintly, little short breaths, but she was breathing and she was catching her breath,” he said. “It was a miracle.”

The woman was able to tell her rescuers her first name but couldn’t initially say where she was. The fire department, which didn’t identify her apart from her hometown, reported that she was alert and talking before she was taken to San Joaquin General Hospital. The man who gave her CPR left before anyone got his name.

Mendoza said it couldn’t have been more than 3 minutes after the car went in the canal that they had the woman out of the water.

Miranda said he had been in a couple of motorcycle accidents that nearly killed him, so he recognized that they were all likely in shock.

“It didn’t hit me until after the whole situation, because while everything was happening I maintained my composure and I did what I had to do and we saved her life, but all day today — I had to go to work, and today at work I was almost in tears,” he said. “I kept replaying the scenario in my head where I had her in my hands and she was unresponsive and I really thought she was dead. It didn’t hit me until afterwards to where it was like, man, she could have died.”

Divers went into the water to check for additional victims, but they didn’t find anyone else.

The Tracy Police Department is investigating what caused the crash.

“It happened so quickly and I’m just glad we were able to save that girl’s life,” Miranda said. “She’s really young and she has a lot of life to live still.”