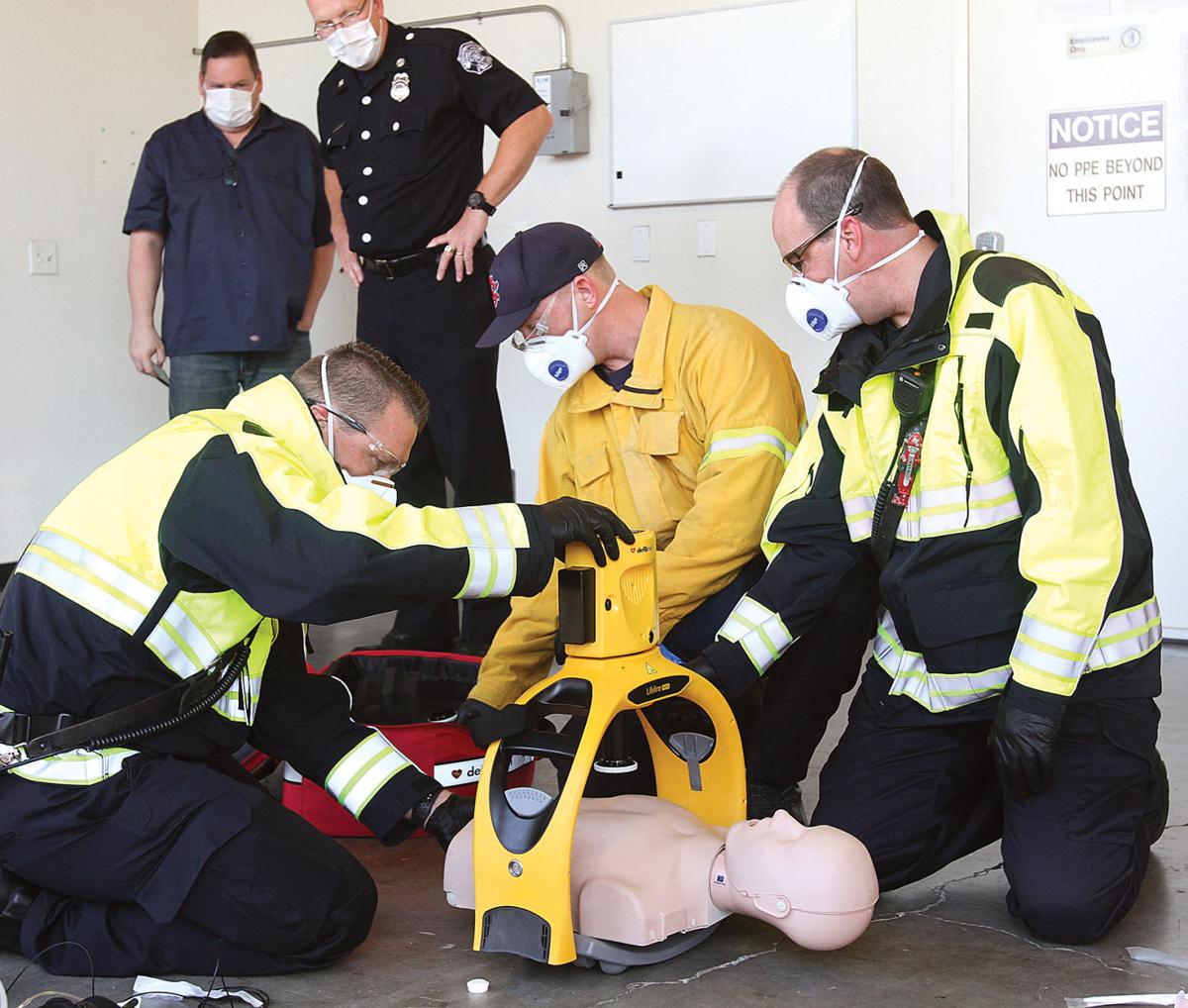 A South San Joaquin Fire Authority crew demonstrates an automatic chest compression device for a group of community members May 21 at the Fire Administration Building. The fire department has added three Defibtech Lifeline Arm devices to its life-saving equipment. 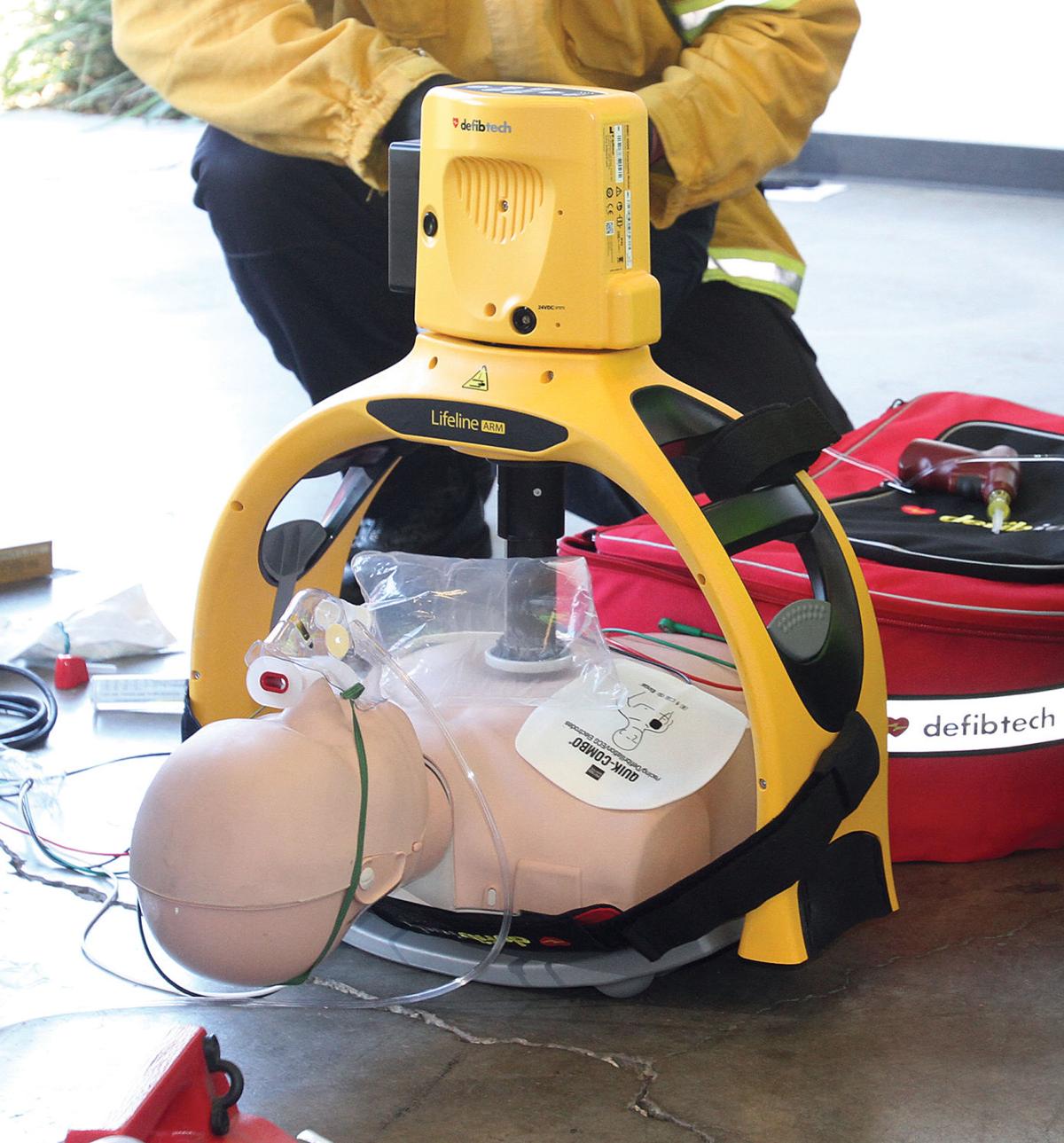 A Defibtech Lifeline Arm gives chest compressions to a CPR mannequin during a demonstration May 21 at the Fire Administration Building. 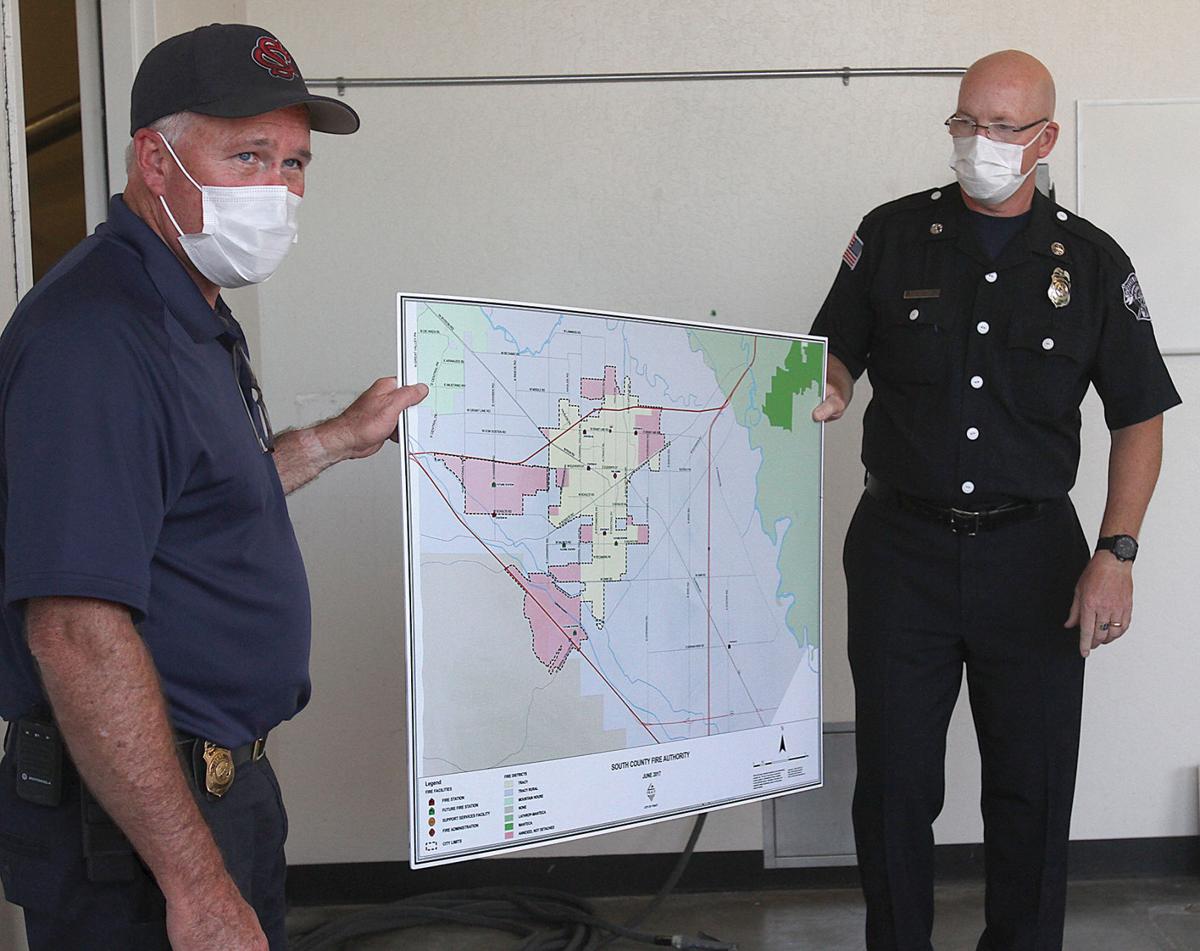 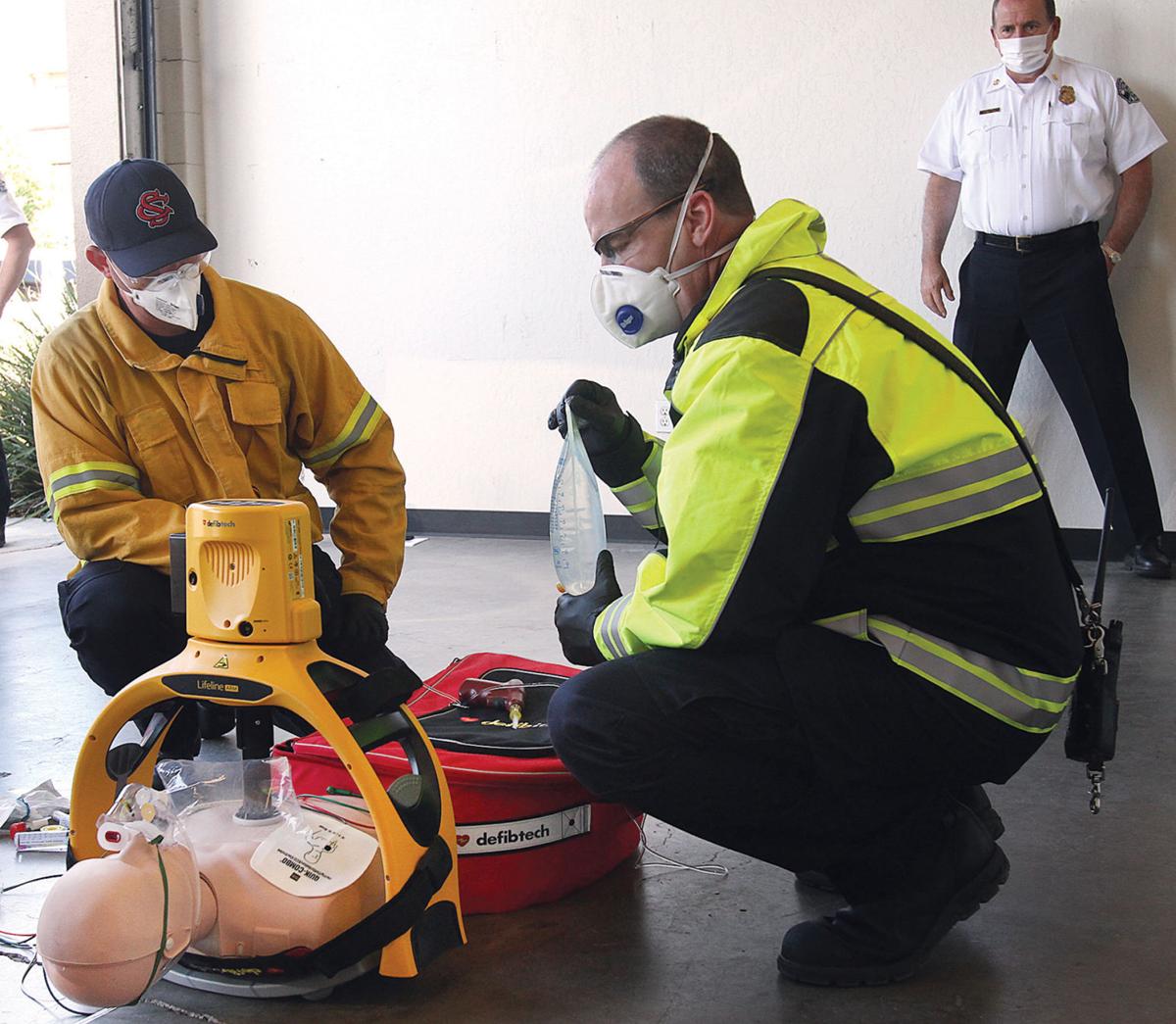 A South San Joaquin Fire Authority crew demonstrates an automatic chest compression device for a group of community members May 21 at the Fire Administration Building. The fire department has added three Defibtech Lifeline Arm devices to its life-saving equipment.

A Defibtech Lifeline Arm gives chest compressions to a CPR mannequin during a demonstration May 21 at the Fire Administration Building.

The local fire department unveiled its latest piece of life-saving equipment, an automatic chest compression device, during a recent demonstration for members of the community.

“As humans, we do pretty good CPR, but it’s fatiguing. You get tired doing it,” Dampier said. “But these devices provide consistent depth, rate and recoil, which is very important in CPR. We know that these devices work. They increase the return of spontaneous circulation, which is just better for the patient.”

Battalion Chief Scott Arganbright said he had seen them in action.

“They’ve had these on their units for years, over a decade. Some of our employees used to work for Manteca Ambulance, so they knew firsthand how important they were,” Arganbright said. “I’ve seen them work on several calls, probably five or six calls here in Tracy where Manteca Ambulance was here and worked very well. The person was able to take a break as far as the ones doing compressions. Paramedics were able to focus on their ALS (advanced life support) skills, and the device did all the grunt work. To me, it was a lot better level of service to the customer.”

The fire department has three of the new Defibtech Lifeline Arm automatic chest compression devices that are expected to go into service this month after the department gets approval from the medical director of the county EMS agency, Katherine Shafer. Firefighters spent nearly a month training to operate the devices.

A strap goes around the patient’s back, and a piston lowers to measure the level of the chest and then begins compressions — 100 to 120 of them a minute, with a depth of about 2 inches. Each battery can run for up to an hour uninterrupted, and crews carry a spare battery.

The machines aren’t perfect for everyone. For smaller patients, especially children, the compression arm might be too short to reach their chests. For larger patients, it might not be able to extend far enough to be effective.

But the devices can be used on many people who are in cardiac arrest — whose heart has stopped beating — and who need CPR because of a medical crisis, an accident, near-drowning or electric shock.

Dampier said the local county policy for CPR changed May 1. Firefighters are now required to give chest compressions for at least 30 minutes instead of 15 minutes, and possibly as long as 45 minutes depending on the situation.

“That’s a long time to be down on the ground doing CPR on somebody, so that’s why we are so excited to have these devices and put them into play,” Dampier said.

“It will absolutely save lives. It will free up our resources,” Bradley said. “The type of CPR we do now, it’s just taxing on our crews to keep that up, especially in a very dynamic situation where you have loved ones in the room watching and doing all the things we have to do to manage that scene. This piece of equipment will just enhance our ability to provide higher service levels.”

Each Lifeline Arm costs $10,500. The fire department had been planning to buy them with money from a grant, but they didn’t receive the grant.

The nonprofit Tracy Friends for Parks, Recreation and Community Services Foundation secured funding for two of the devices, and the fire department was able to pay for a third. Bradley said it would have taken the fire department at least 18 months to be able to buy all three with changes to the budget because of COVID-19.

Stations 93 and 94 were chosen as they are the farthest from the other local stations and have to wait longer for a second engine company to arrive. The truck at Station 91 is sent to all cardiac arrest calls.

In a May 21 demonstration for a group of community members, firefighters first performed CPR chest compressions on a training dummy, trading off in 2-minute shifts.

Watching the firefighters, Bradley said the required rate and depth of compressions means they have to rotate pretty quickly and they would need to call for additional resources.

Dampier said as professionals they perform the compressions continuously for up to eight minutes.

“The key to CPR is continuous compressions. It takes about 30 compressions to build up enough pressure to start moving blood throughout the body,” Dampier said. “Through good, effective CPR, upon the recoil, it expands the chest and actually draws some oxygen into the lungs, which allows the patient to stay oxygenated without interrupting compressions.”

Dampier said the only time first responders would pause in giving CPR, whether by hand or using the automated device, would be to analyze the patient’s heart rhythm for a few seconds. Then the compressions would start again.

By using a machine to give compressions, the first responders can switch to other tasks, including giving IV medications, finding out the patient’s medical history, and working with the family members or other people who are there.

“It’s pretty chaotic,” Bradley said. “It’s usually people having the worst days of their lives, especially the family — not to mention the patient. But the family members who are having to witness something like that is a challenge.”

The fire department will evaluate the performance of the automatic chest compression devices, but Bradley said the department expects to budget for more of the devices in future years and put one on each fire engine.

Each year, June 1-7 is designated as National CPR and AED Awareness Week.

More than 350,000 out-of-hospital cardiac arrests occur in the United States each year, with about 70% happening in homes. Fortunately, hands-only CPR can be performed by family or household members.

Hands-only CPR involves two simple steps and anyone can learn it from a 90-second video available at heart.org/handsonlycpr.

Step 1: If a teen or adult in your home suddenly collapses, call 911 immediately.

Step 2: Place one hand on top of the other as shown in the video and push hard and fast on the victim’s chest.

Rescuers should push on the chest at a rate of 100 to 120 beats per minute. Try following the beat of one of these songs: “Stayin’ Alive” by the Bee Gees, “Crazy in Love” by Beyoncé featuring Jay-Z, “Hips Don’t Lie” by Shakira and “Walk the Line” by Johnny Cash.