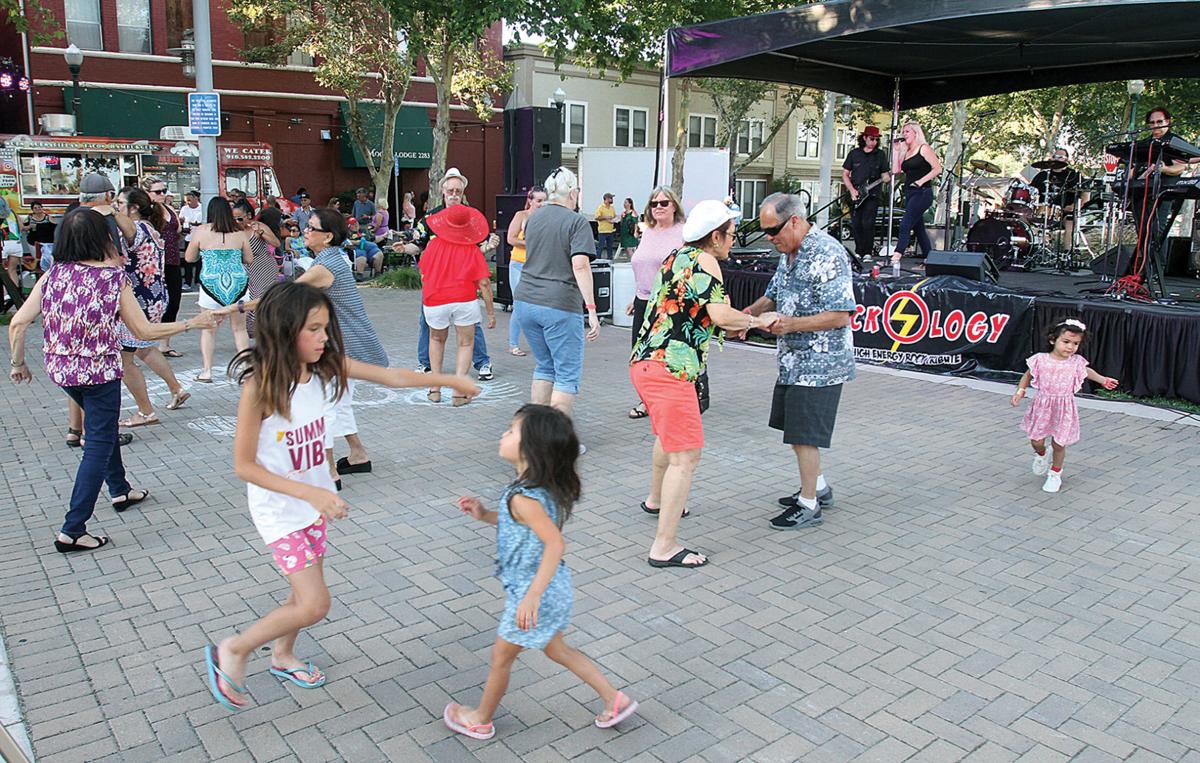 People dance to the music of Rockology at the Front Street Plaza last summer. The first Downtown Tracy Block Party of 2020, scheduled for May 1, was canceled, and the fate of the rest of the lineup is in doubt. 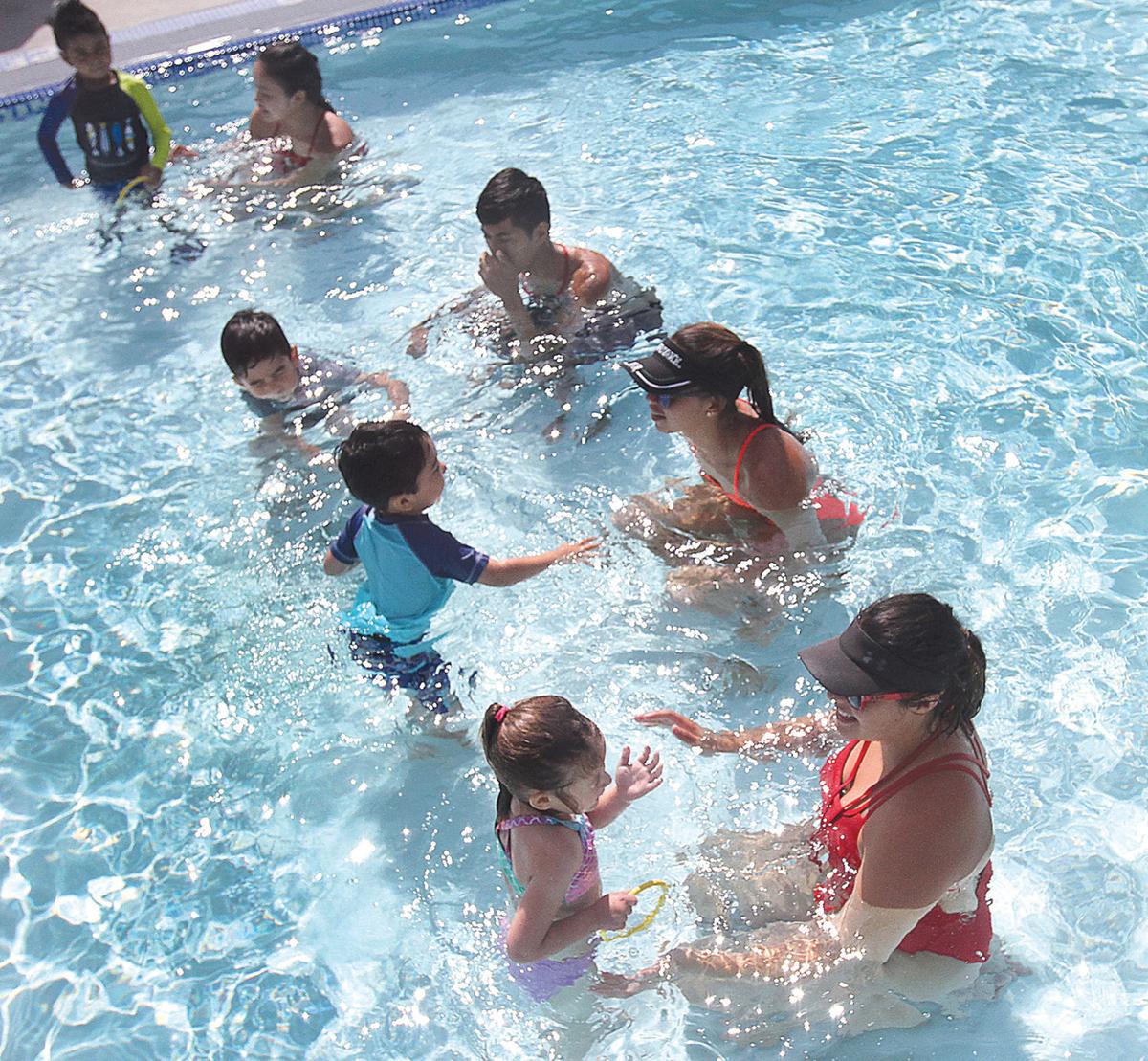 Lifeguards give swim skills lessons in 2019. This year's swim programs will start late if at all.

People dance to the music of Rockology at the Front Street Plaza last summer. The first Downtown Tracy Block Party of 2020, scheduled for May 1, was canceled, and the fate of the rest of the lineup is in doubt.

Lifeguards give swim skills lessons in 2019. This year's swim programs will start late if at all.

The city of Tracy reopened tennis courts, handball courts and outdoor volleyball courts May 6 in response to California Department of Public Health recommendations.

Swim lessons and other community programs are on hold as the city keeps facilities closed at least through the end of May in response to the COVID-19 pandemic.

Parks and Recreation Director Brian MacDonald said the city facilities and programs that were shut down in mid-March because of the stay-at-home order issued by San Joaquin County Public Health Services would remain closed through May 31.

But the city will reevaluate closures as new direction comes from the governor’s office and the county.

“Our county even recently has made adjustments to their order, like when they opened up golf courses, so there may be something with certain park amenities, and we will just have to be ready and pivot as it comes,” MacDonald said.

Included in the closure is the Joe Wilson Pool at Dr. Powers Park, which would normally be opened for swim lessons and recreational swimming at the end of May.

MacDonald said the swim season is on hold indefinitely.

“What I know today is the county shelter-in-place order is very clear that that would not be considered an essential business, an essential function, an essential activity, and all we can do right now is take that as our direction, and we’re really looking to the county department of public health to provide clarity on that,” he said.

The four stages that will lead to the end of the state’s stay-at-home order, which Gov. Gavin Newsom announced Tuesday, don’t specifically address recreation programs. Personal protective equipment such as face coverings may be required during intermediate stages.

“We have asked them to help provide some clarity on maybe what do they see even in the governor’s phases, phase two, three and four — what do public pools look like,” he said. “In my opinion, it may be more difficult for us to ensure social distancing for one-on-one swim lessons, for example, and you really can’t wear the PPE while you’re swimming.”

Some of the lifeguards from last year’s swim programs will be trained and ready to go if the pool does open, but MacDonald believes it would be a modified version of their swim program if it does.

As things stand today, he predicted it would be impossible to start swim lessons as soon as June 1.

People can still use city parks to get fresh air and exercise, though with some restrictions.

“We get questions — people think our parks are closed. And the answer to that is certain amenities in our parks are closed, like basketball courts, tennis courts, playgrounds and bathrooms. But the open grass areas for people to walk through, ride their bikes, walk their dog — even if you wanted to as a family unit or same household throw the ball around — those open areas are still open to the public,” MacDonald said. “Our residents have been very, very cooperative about this whole issue.”

The Memorial Day observance at the Tracy Cemetery will be adapted to comply with guidelines for social distancing. Plans aren’t yet final, but MacDonald expects the observance on May 25 to be a virtual event.

“We are not allowed to have public gatherings right now, so what we are planning to do is probably record the event,” he said.

In discussions, people have raised the idea of broadcasting the Memorial Day service on social media or the city’s public access TV channel, Channel 26.

“We all agree we want to do something to honor the fallen and really pay our respects,” MacDonald said. “We just have to figure out how to do it within the county guidelines.”

Plans for the Fourth of July are also under discussion.

MacDonald said there would be a celebration, but it wouldn’t be the same as in past years. Details will be announced later.

If people have questions about what city facilities are open or what programs are planned, they can contact the Parks and Recreation Department at 831-6200 or parks@cityoftracy.org. Questions can also be sent in through the GORequest app or using the Contact Form on the Contact Us page at www.cityoftracy.org.

More information about classes and activities can be found at www.tracyartsandrec.com.

• Grand Theatre Center for the Arts, including all shows and classes.

• Rollin’ Rec and first day of recreational swimming (May 30)

People can return to Tracy's skate park, dog park and picnic areas, but some parts of city parks are still off limits.