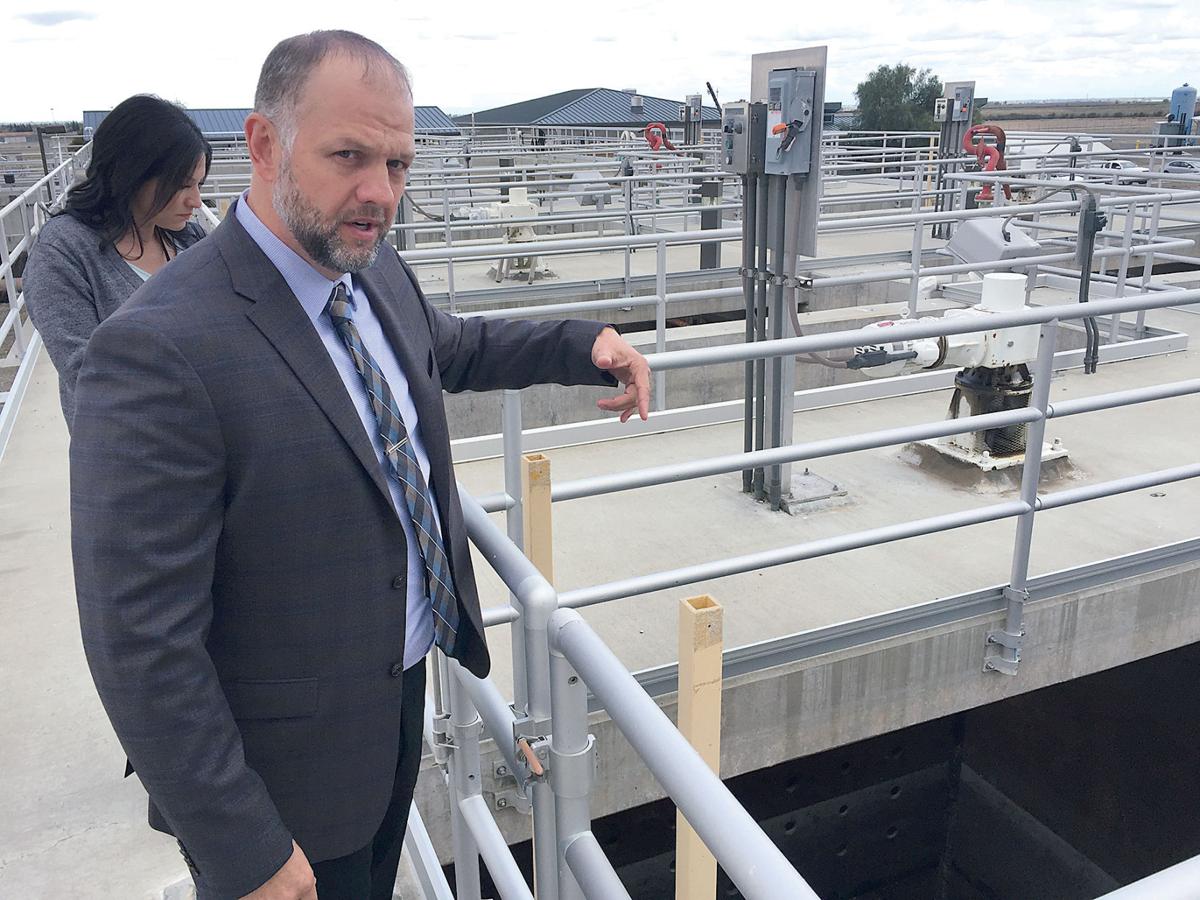 Superintendent Lea Emmons explains the coagulation and filtration process that happens at the city of Tracy’s water treatment plant on South Tracy Boulevard. 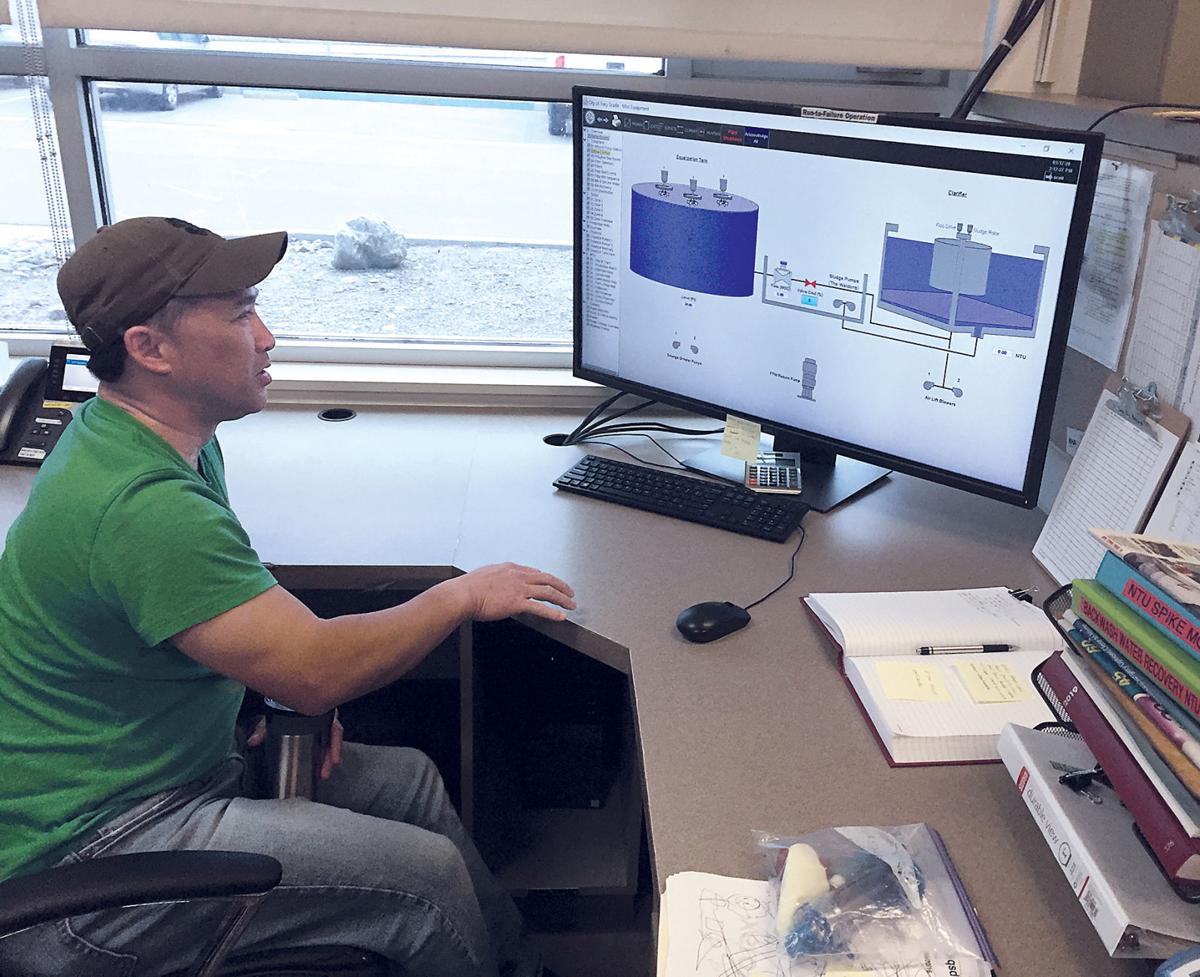 Utility operator Scott Hom tracks the Tracy water treatment plant’s status through a computerized operating system, which allows him to make adjustments to the treatment process and the flow of water through the city’s system.

Superintendent Lea Emmons explains the coagulation and filtration process that happens at the city of Tracy’s water treatment plant on South Tracy Boulevard.

Utility operator Scott Hom tracks the Tracy water treatment plant’s status through a computerized operating system, which allows him to make adjustments to the treatment process and the flow of water through the city’s system.

The city department tasked with supplying one of Tracy’s most critical commodities — clean drinking water — has seen no changes with the onset of COVID-19 concerns, and no reason to expect any changes in the coming weeks and months.

Tracy’s John Jones Water Treatment Plant on Tracy Boulevard sits just south of Tracy Municipal Airport, right next to the Delta-Mendota Canal. Though it appears as a remote outpost on the edge of the city, the plant is at the center of the operation of city utilities as it pumps out 13 million gallons per-day of clean water to Tracy homes and businesses.

It takes only a couple of people to run the plant through a computerized system as it draws water from the Delta-Mendota Canal and a pipeline from Woodward Reservoir on the Stanislaus River.

Lea Emmons, Tracy’s water treatment plan superintendent, said his staff of 13 operators rotates through the plant day and night. Any precautions that might be imposed because of COVID-19 concerns are already standard procedures at the plant.

“Being it’s a drinking water facility, we disinfect our work areas, we disinfect on a regular basis to keep clean, because there are so many of us that are coming in and out and touching the same work stations,” Emmons said, adding that workers rotate in and out during the plant’s 24-hour operating schedule. “We won’t have a staffing shortage if anybody gets sick. We can adjust our schedules and adjust our staffing levels.”

The city gets its water from three sources. Over the course of the year, nearly half the city’s water, 49%, comes from Woodward Reservoir through a pipeline operated by the South San Joaquin Irrigation District.

The other main source, about 47%, is the Delta-Mendota Canal, operated by the U.S. Bureau of Reclamation. The city also relies on nine groundwater wells around the city for about 4%-5% of the city’s water supply on an annual basis.

Emmons said the treatment process for the aboveground sources is similar, though the SSJID water is treated at the Nick C. DeGroot Water Treatment Plant next to Woodward Reservoir just north of Oakdale. That’s where the city’s water is coming from now as Tracy’s Jones treatment plant is offline for regular wintertime maintenance.

Both the Tracy and SSJID plants begin treatment with coagulation — the process of chemically binding and settling out turbidity and impurities, and then removing the sediment. Then they filter the water. The Jones plant uses a sand and carbon filtration system, while the SSJID plant uses a membrane system. Both plants use sodium hypochlorite as a disinfectant, which is also used for water from city wells, and Tracy takes the additional step of using ultraviolet light to disinfect the water.

From there, the water goes into two 2.9 million-gallon reservoirs next to the treatment plant.

“We have daily, weekly, monthly, quarterly and annual testing, all highly regulated by the state,” Emmons said. “I turn in a report once a month and they review everything.”