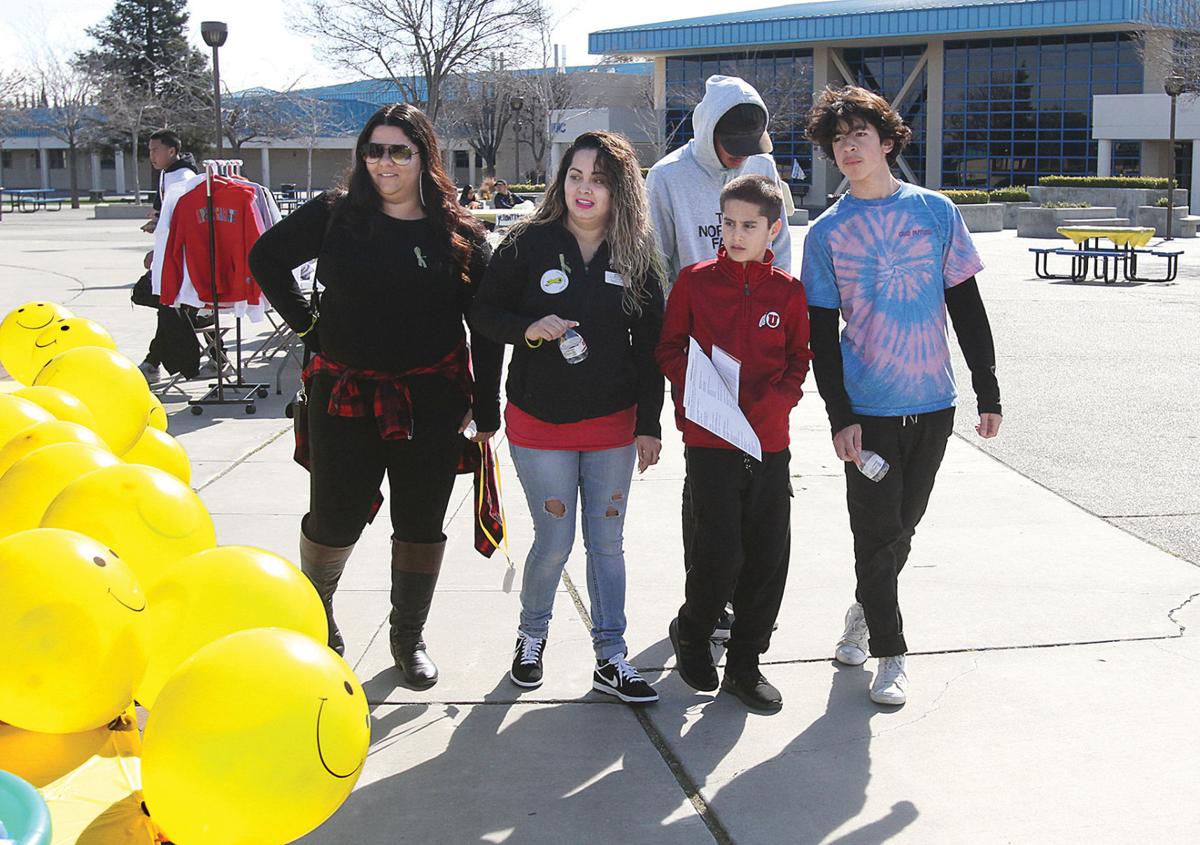 A group walks laps around the West High quad in 2019 as part of the first Suicide Prevention Walk. 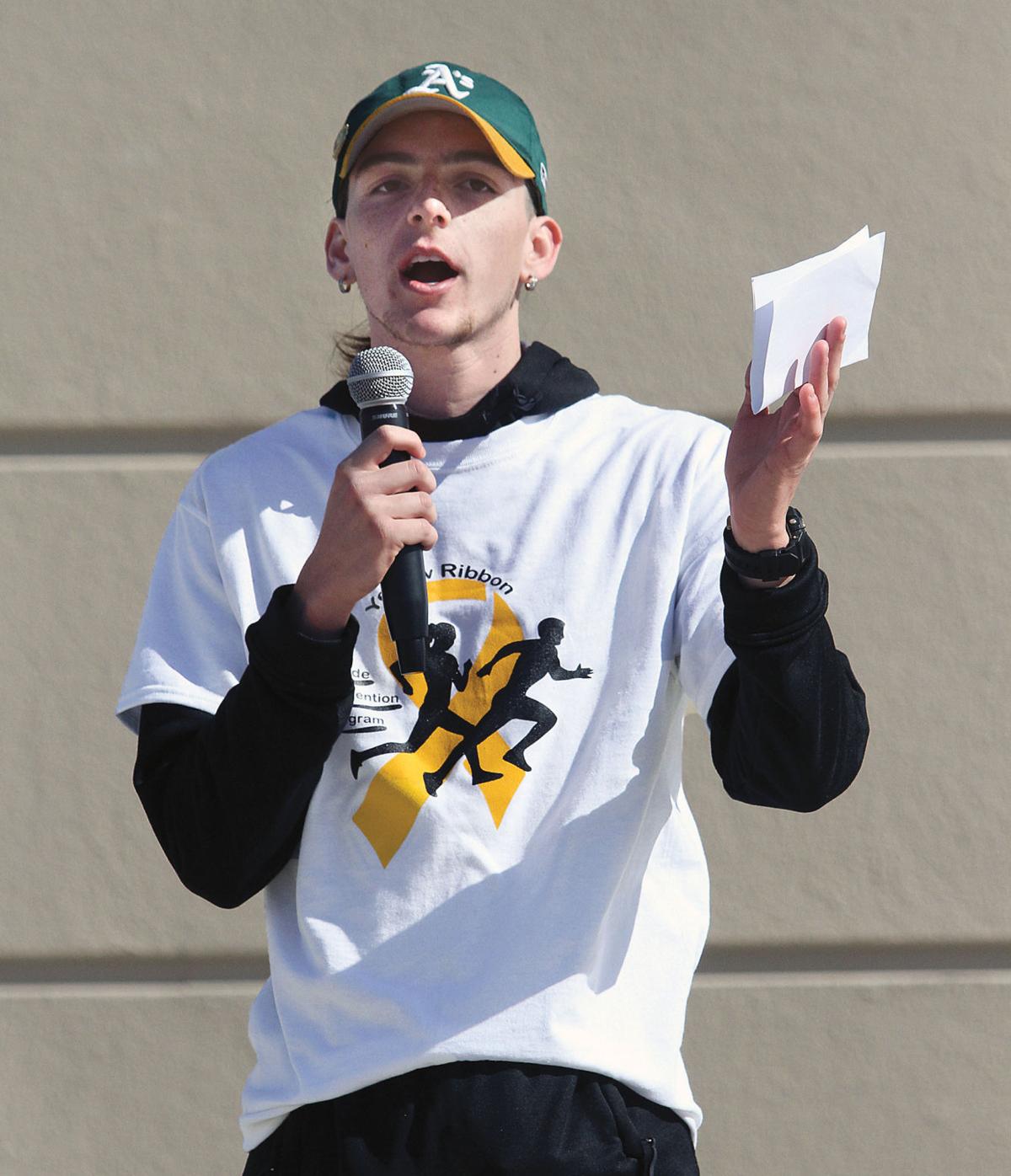 West High junior Nathan Campbell speaks about the Suicide Prevention Walk he organized in the campus quad in 2019 morning in memory of his uncle who died by suicide. 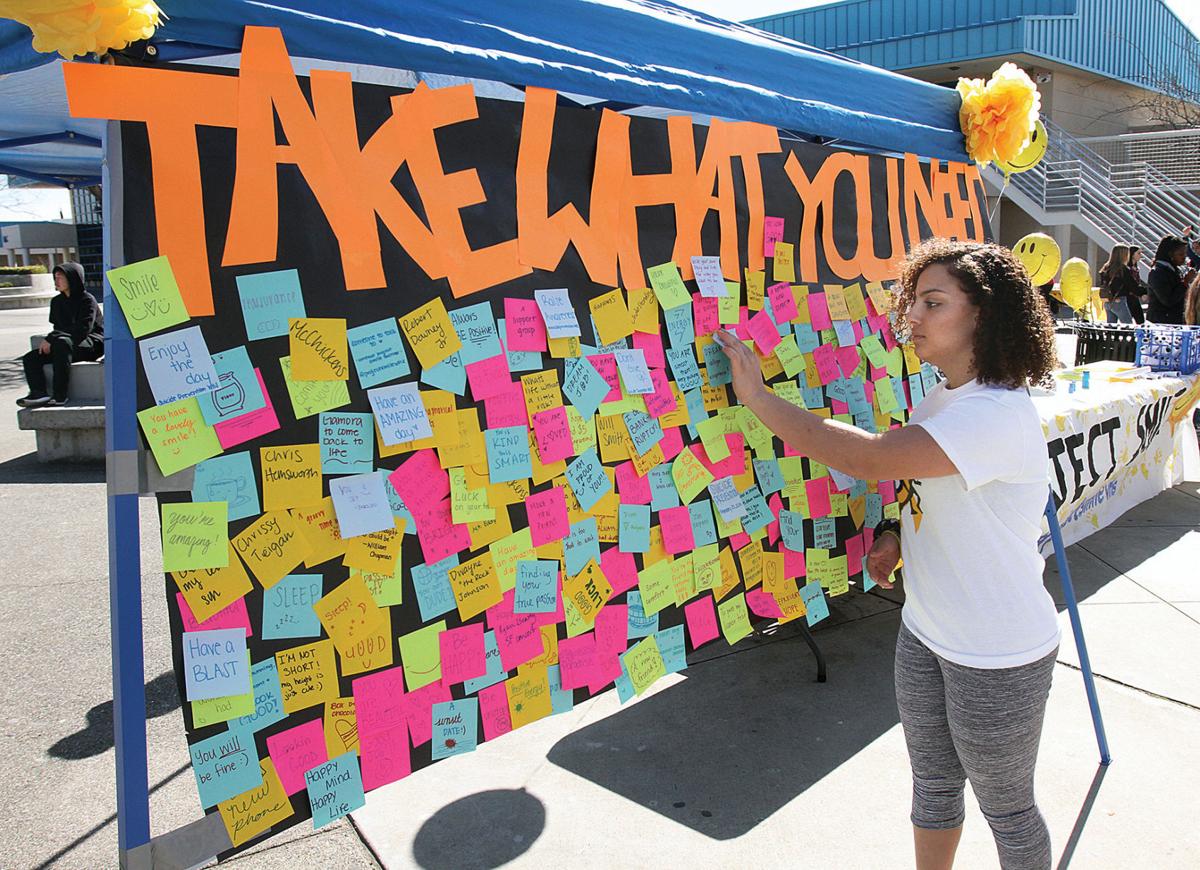 West High School junior Farah Al-masri adds a note of inspiration to a board set up by the school’s Project Smile club. The club was one of several organizations that took part in the first Suicide Prevention Walk in the school quad in 2019. 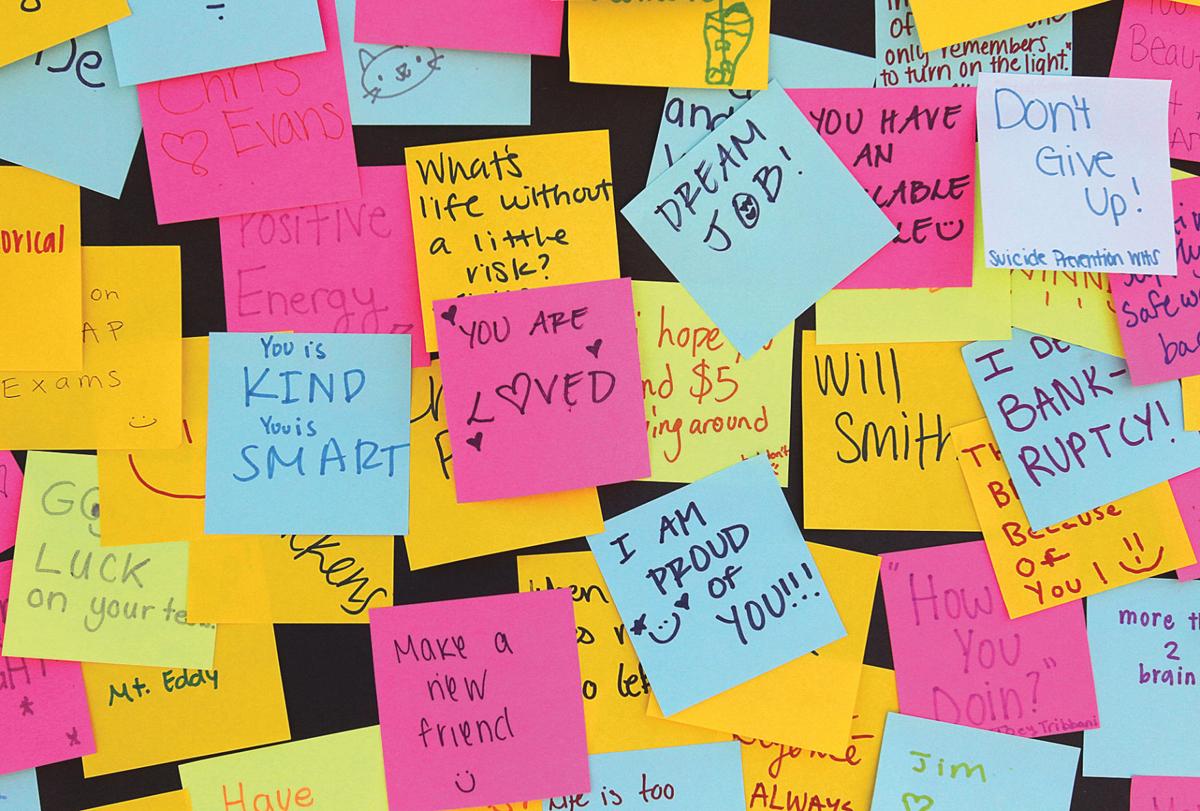 West High’s Project Smile club placed a wall of notes for people to add to or choose from at the first Suicide Prevention Walk in the quad in 2019. 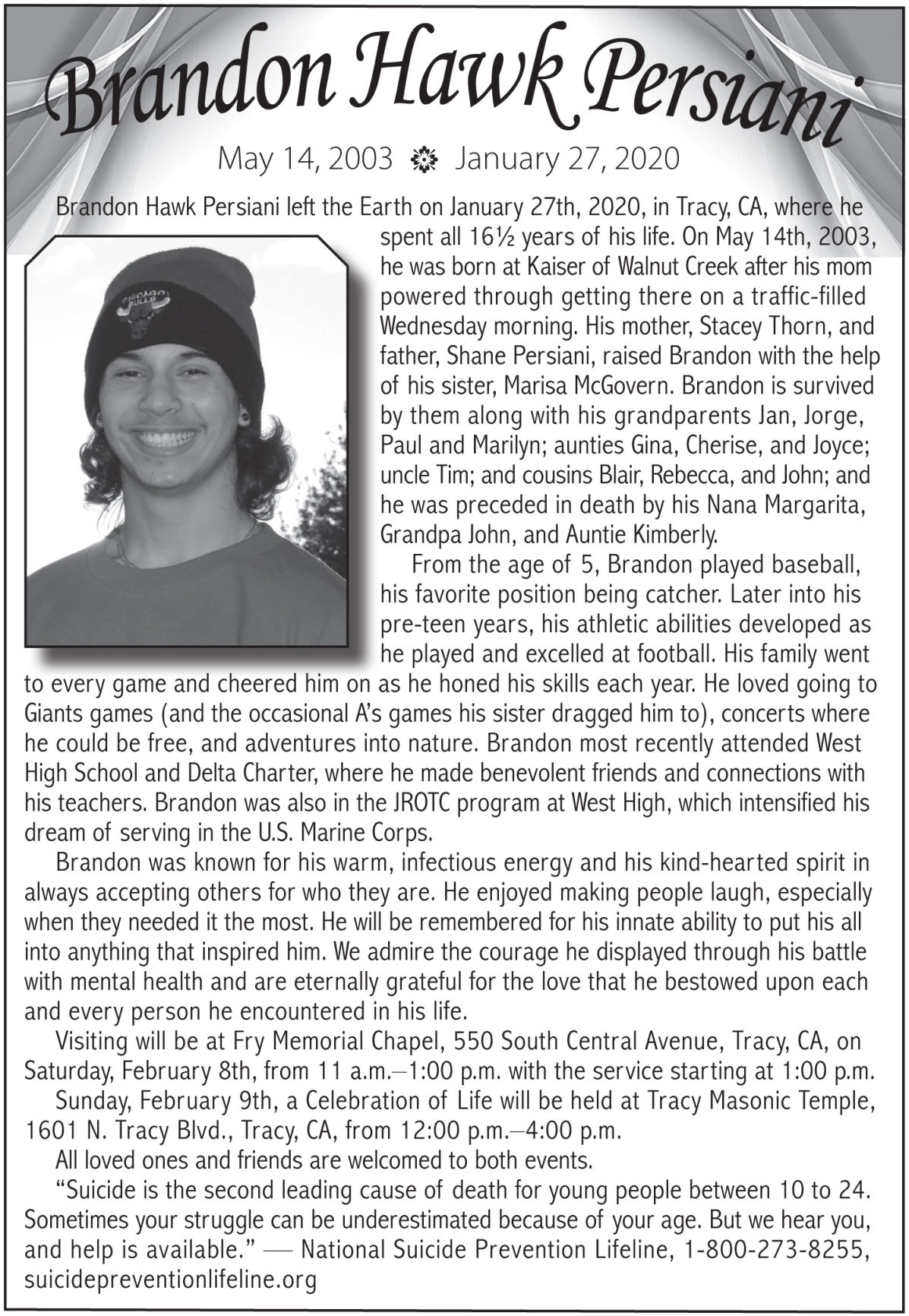 • Questions concerning obituaries should be directed to the Tracy Press advertising department at tpads@tracypress.com or 209-830-4260.

A group walks laps around the West High quad in 2019 as part of the first Suicide Prevention Walk.

West High junior Nathan Campbell speaks about the Suicide Prevention Walk he organized in the campus quad in 2019 morning in memory of his uncle who died by suicide.

West High School junior Farah Al-masri adds a note of inspiration to a board set up by the school’s Project Smile club. The club was one of several organizations that took part in the first Suicide Prevention Walk in the school quad in 2019.

West High’s Project Smile club placed a wall of notes for people to add to or choose from at the first Suicide Prevention Walk in the quad in 2019.

A year ago, West High School junior Nathan Campbell organized a walk at his school in memory of his uncle who had killed himself. He hoped to get people of all ages to talk openly about their feelings and to prevent others from experiencing the pain his family had gone through. He hoped to make it an annual event.

He had no way to know how it would hit home with his classmates this winter.

On Jan. 27, another student at West High, Brandon Persiani, took his own life. He was 16 years old.

“It just shocked our campus. Even our teachers were emotional about it,” said Campbell, now a senior. “This is why, for me, the walk I started last year, it’s personal and genuine. I really want people on our campus, if they have issues or they need to talk, they know what our resources are.”

Campbell said he and Persiani were in the same third-period physical education class and they had spoken a couple of times and were cordial. No one expected his death, and the days that followed were hard for the close-knit school community.

“Honestly, how everyone felt afterwards was just to appreciate everyone while you have them,” Campbell said. “I think that’s how everyone went through it, just reminding each other how much they mean to each other, and top of that, looking out for other people who might have been close with Brandon.

“We don’t want them to feel like they are alone at a time when they need someone. Everyone was just getting each other’s backs and making sure everyone felt loved.”

The second Suicide Awareness Walk will be from 11 a.m. to 1 p.m. Feb. 22 in the West High School quad, 1775 W. Lowell Ave. Many West students are expected to attend, but everyone in the community is welcome to participate regardless of age.

“Not only are there going to be on-campus resources there, but we reached out to a couple of community ones,” Campbell said. “I am going to do my very best to help as many people as I can help. It’s more personal to them. This year, I think, after the walk, more people will take something away from it.”

Persiani’s older sister, Marisa McGovern, plans to be there. She said Monday that the people who were closest to her brother were still coming to terms with his death.

“His smile brightened up everybody’s day, and everybody talked about he was always laughing and making jokes, but the biggest thing was, if anybody had a problem, he was always there for them,” she said. “And this is where for me the awareness really comes in, because mental health just plays a huge part in this, where Brandon did so much for other people and wanted to be there because he knew what he felt.”

She said that her brother struggled with sadness and other difficult emotions, but even through his pain, he always tried to help other people.

“Even though you see one person who’s always out here always giving, giving, giving, you need to make sure that they’re not only receiving for other people but receiving for themselves,” McGovern said. “The glass-full example — you only want to serve from a glass that’s overflowing. If your cup’s empty, you don’t want to be giving out from an empty cup. And that was kind of the thing that I saw with Brandon, is that he may have been giving from an empty cup just because he didn’t want other people to feel that way.”

She said she had a friend who died by suicide in Tracy about two years ago, and her brother opened up to her at the time because he saw the pain and grief she and her friends were going through.

“It seems like it’s a shared thing that each one of these people who commit suicide have — they are holding onto something that there’s no release for,” she said.

She said her brother hadn’t reached out for help on the day he took his life.

“There was nothing out of the usual, and that’s what struck us so hard. Yesterday Brandon was supposed to come over to my house and he was so excited, we had plans, there were just things that were to follow that he was excited for, looking forward to,” McGovern said. “So for this to be just out of nowhere, without any physical, verbal signs, like a cry for help or anything, it’s hard to see that, you know.”

Campbell said several campus peer groups will be involved in the walk next weekend, including West High conflict management, Project Smile, the Gay Straight Alliance, and the One Day at a Time Club, which focuses on youth empowerment. Kimball High School’s Jaguar Project will also support the walk.

“At West, we have a lot of resources, but where we lack is just getting those resources out,” Campbell said. “We have a lot of them, but just reaching out to the students and letting them know, ‘Hey, we have these for help,’ and that’s why I think it’s important.”

Participants from the larger community will include Sow A Seed Community Foundation, Tracy Crime Stoppers and the Child Abuse Prevention Council.

McGovern expects the walk to bring people together in a spirit of greater awareness as they remember her brother and other people lost to suicide.

“For West High and all of Brandon’s friends, there’s a lot of pain right now. With pain comes strength. As much it sucks in that, there’s a lot of strength that is going to come from these kids to know that they are going to look for other options, they’re going to want to tell other people that there are other options,” she said. “Because this is so directly connected with them, this is going to make them want to take it more seriously and put more of an outreach outside just this high school community.”

Hundreds of students and adults gathered in the West High School quad Saturday morning for the second Suicide Awareness Walk.