Starting at
$52.00 for 365 days
Get Started
View all rates
You have permission to edit this article.
Edit
Welcome, Guest
COVID-19 Coverage
News
Voice
Our Town
Sports
Datebook
Obituaries
Advertising
Classifieds
Special Sections
1 of 7 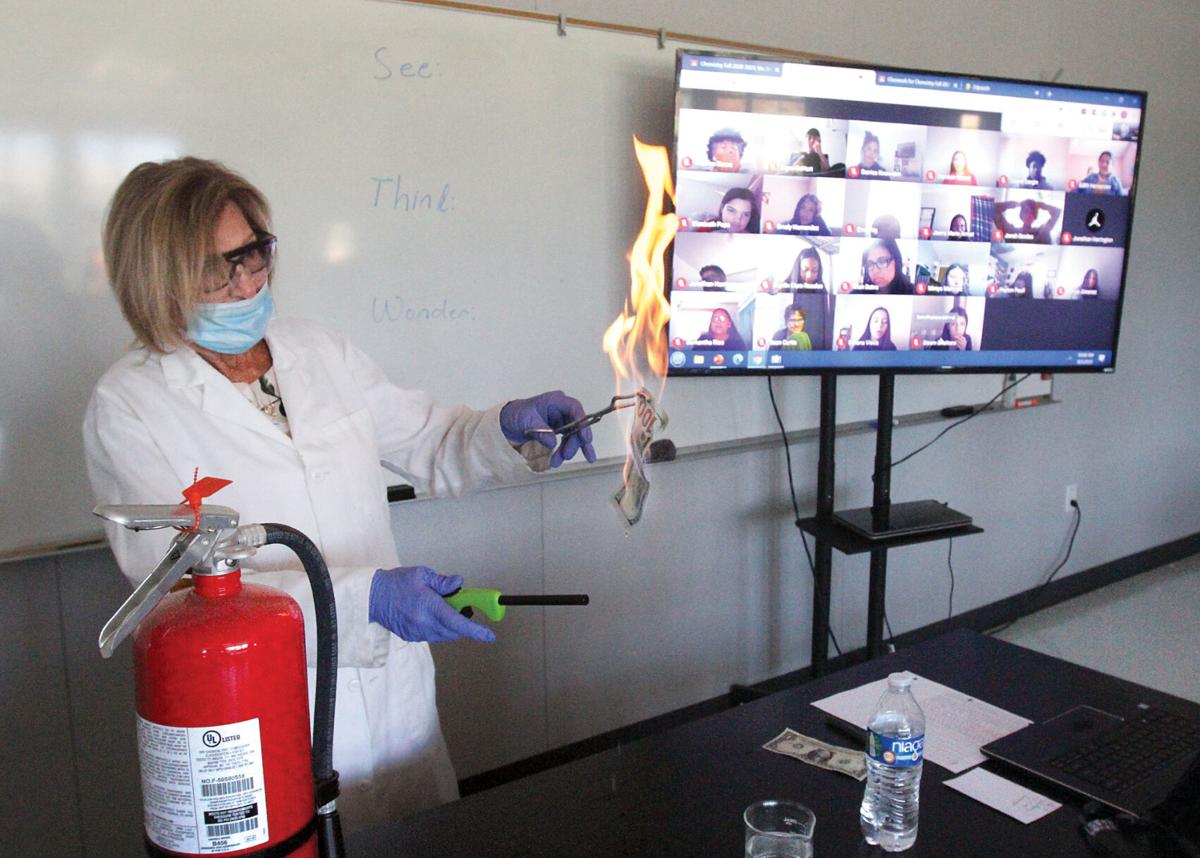 Millennium High School chemistry teacher DyAnne Holmes sets fire to a $100 bill soaked in water and isopropyl alcohol as she conducts a demonstration for her class watching online Wednesday morning. 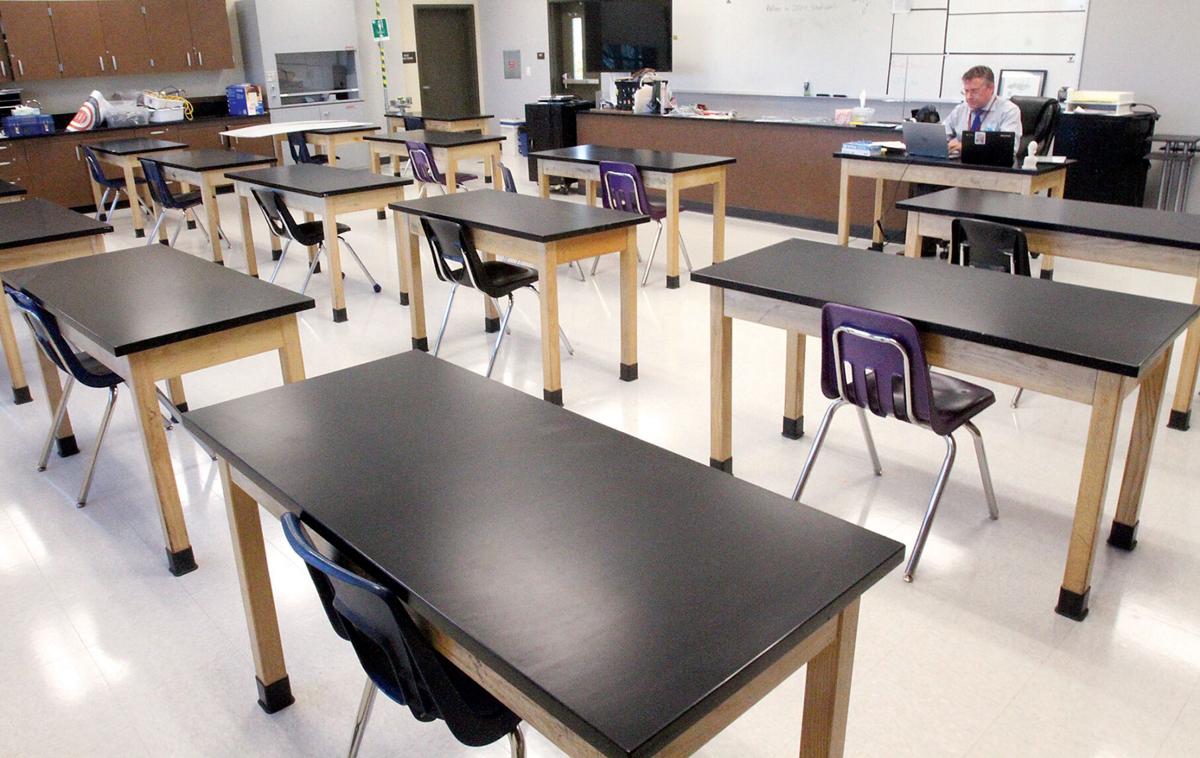 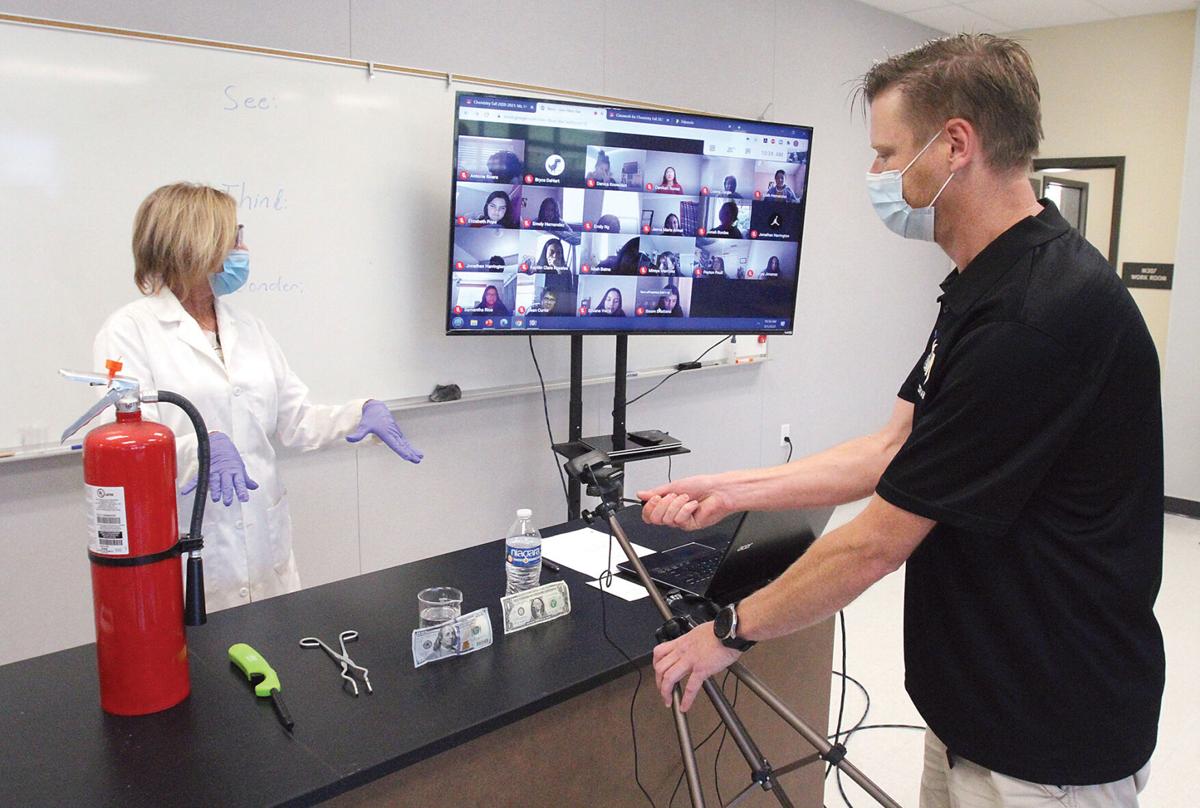 Millennium High School chemistry teacher DyAnne Holmes gets some camera help from Tracy Learning Center’s director of technology, Warren Snell, as she conducts a demonstration for her students Wednesday morning. 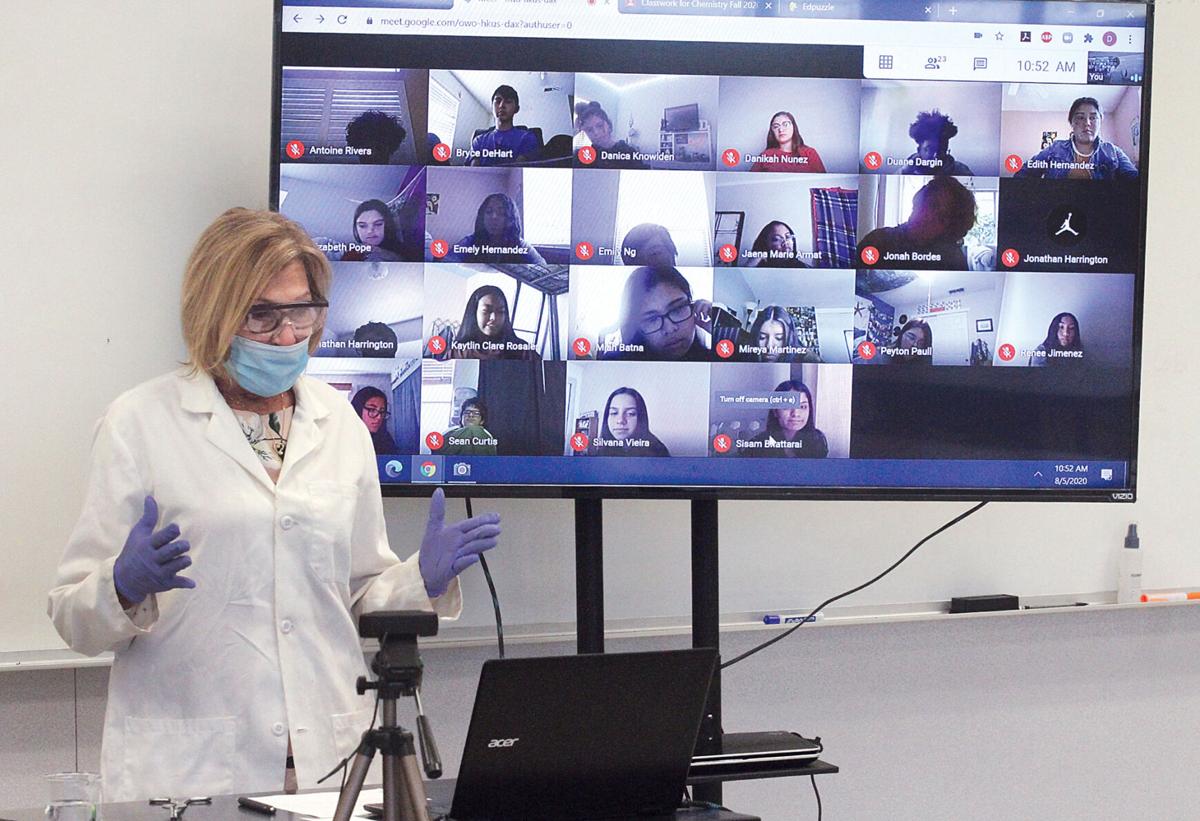 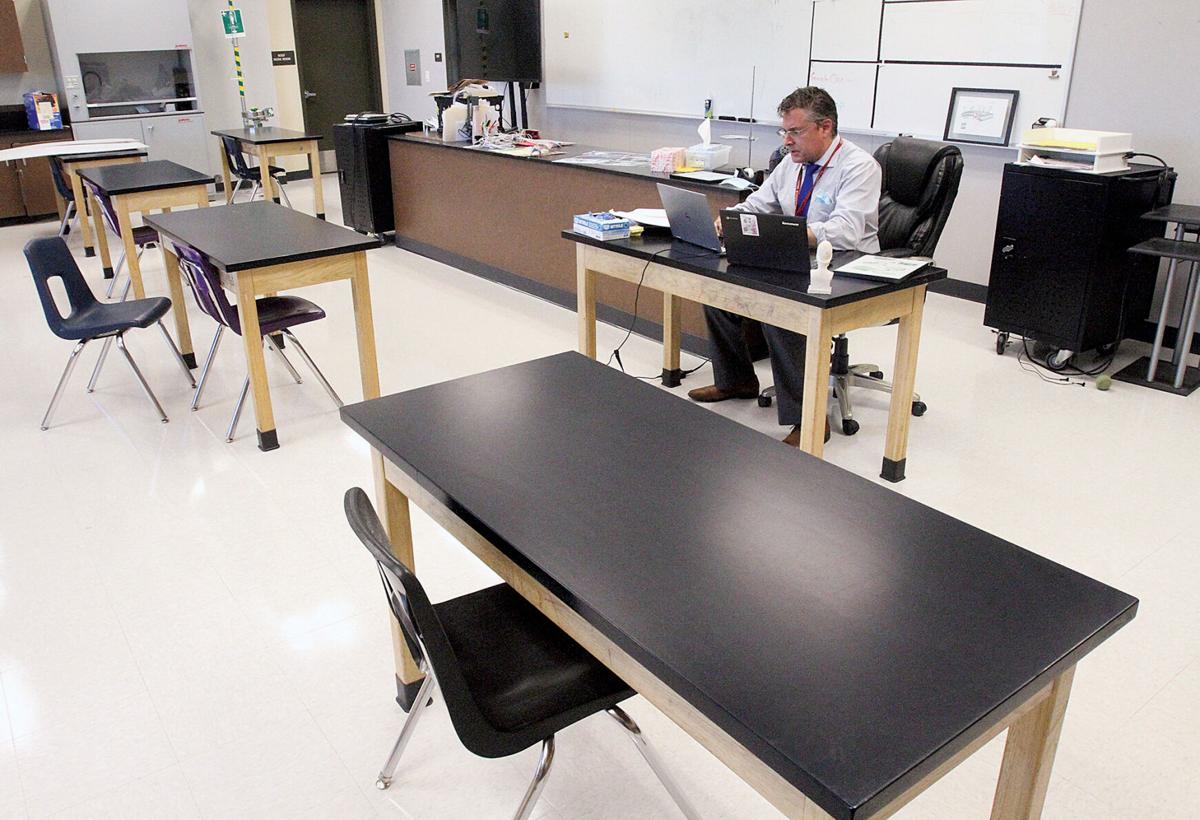 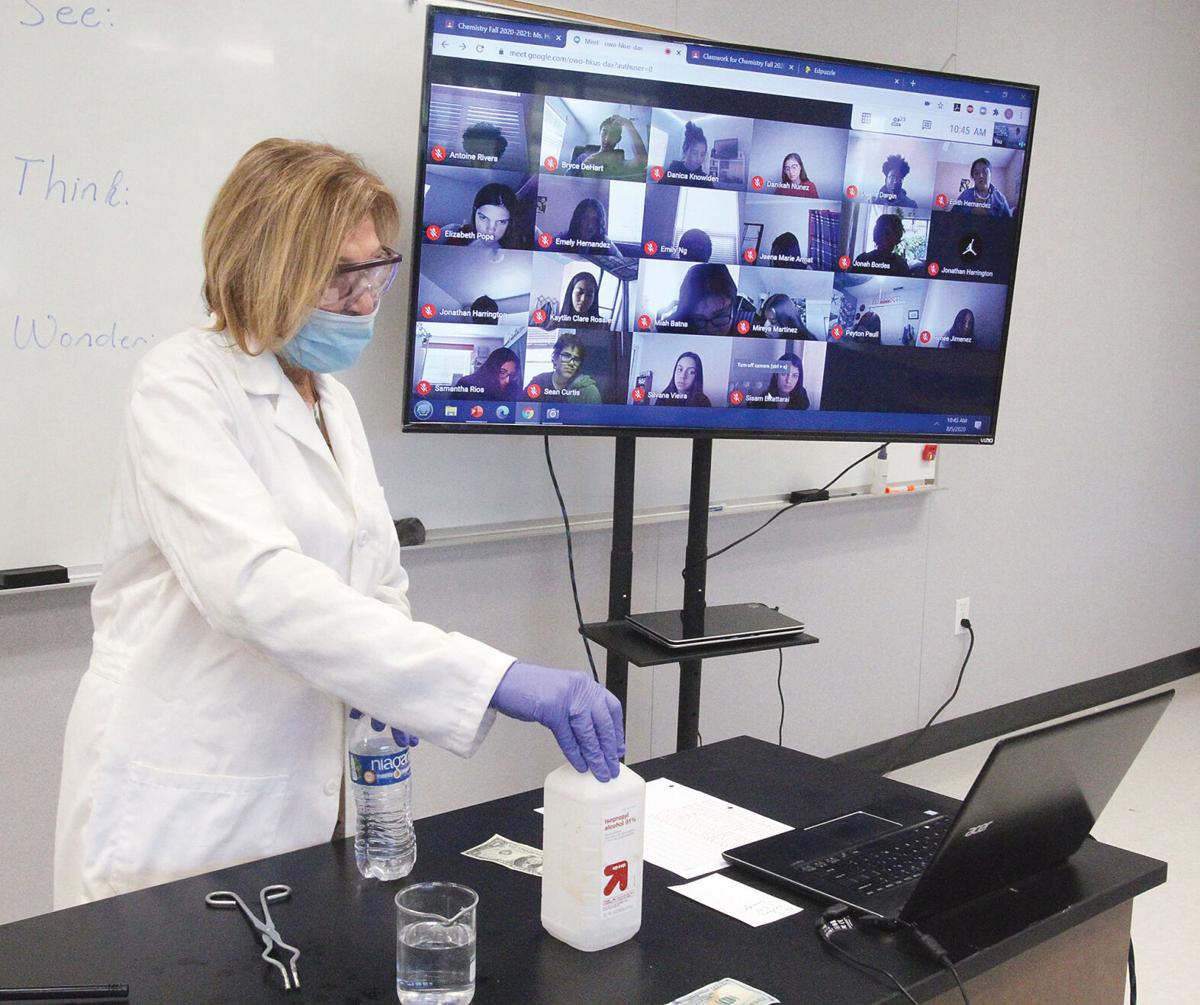 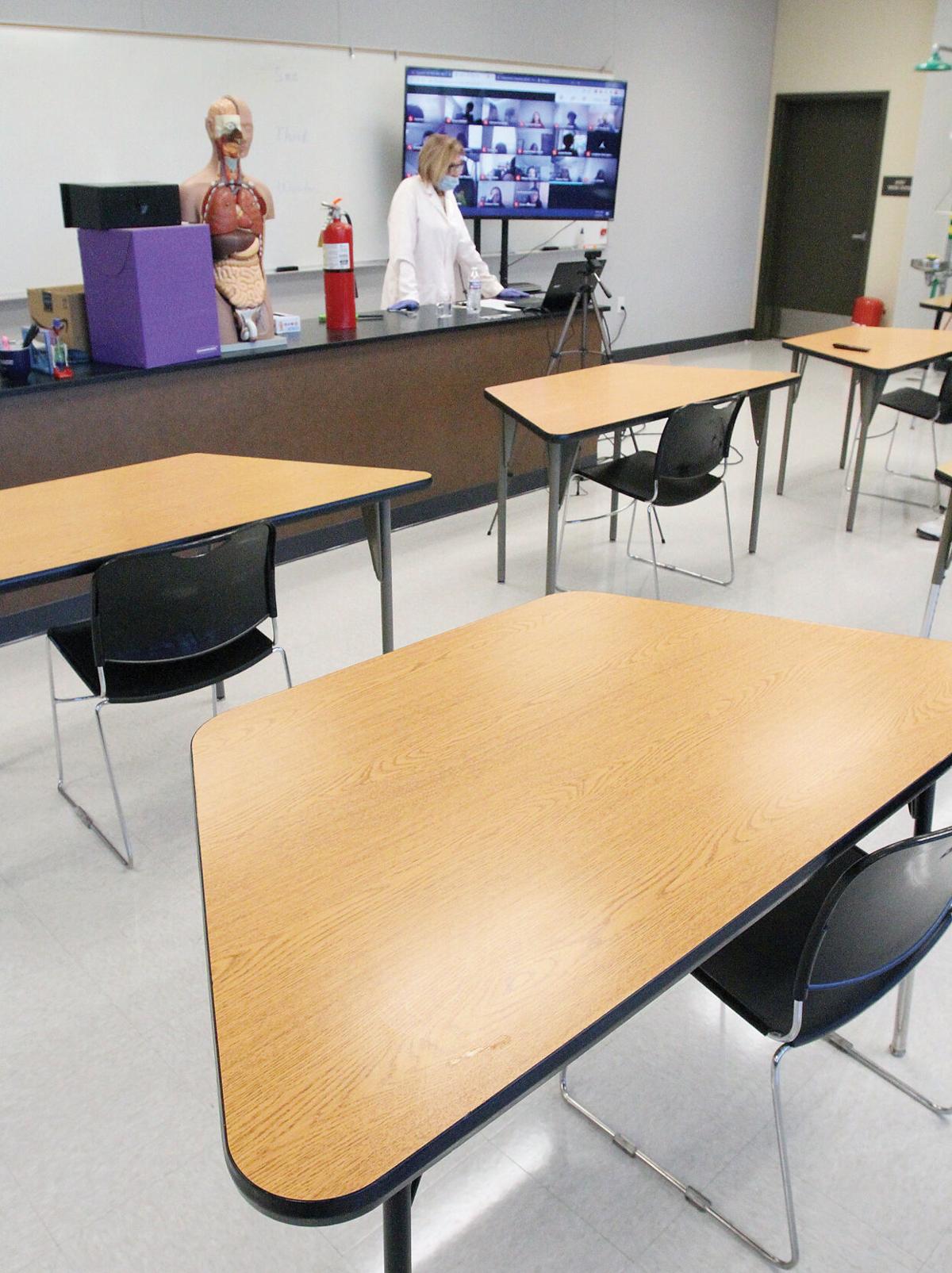 Millennium High School chemistry teacher DyAnne Holmes sets fire to a $100 bill soaked in water and isopropyl alcohol as she conducts a demonstration for her class watching online Wednesday morning.

Millennium High School chemistry teacher DyAnne Holmes gets some camera help from Tracy Learning Center’s director of technology, Warren Snell, as she conducts a demonstration for her students Wednesday morning.

Millennium High School chemistry teacher DyAnne Holmes dimmed the lights and carefully lifted a $100 bill from a beaker with a pair of tongs. Holding it in front of her, she flicked a lighter and flames raced across the bill.

“I had so much fun today,” Holmes said. “We have lots of teachers in education that are so technologically savvy, but that’s not been my big forte, I have always said I was made to be in a classroom. But after doing what I did today, I passed a fear factor, and I’m already thinking of more innovative ways to use it.

“I’m sure there are teachers out there that are doing some really fascinating things,” she added. “As teachers all begin to share with each other, I’m sure it will be better for everyone.”

Schools across San Joaquin County and a vast majority of California were required to open the 2020-21 school year with distance learning after COVID-19 numbers swelled over the past month and a half.

“I think were really well prepared,” she said. “We have amazing students and parents who have really followed our instructions and helped in terms of getting their students prepared and ready. The younger the child, the more of an adjustment it is.”

She said they had learned from the end of the school year, when classes switched to an online format after campuses were closed in response to the pandemic.

“I think the thing that I’m proudest of is that our distance learning for the beginning of this year is really focused on being sure that it’s interactive, that it’s definitely appropriate and on point with the state standards, and it’s the teachers doing teaching and the students participating,” Stewart said. “It’s not packets of work or work to do with teachers kind of giving some guidance along the way. Our teachers have been really focused on making sure it’s interactive. You can’t ask kids to just sit and look or watch a video and then do some work.”

In addition to Chromebooks for those who needed one to use at home, the families of Primary students picked up supplies, such as crayons and Play-Doh, that the elementary-grade children will use to follow along with their teachers to work on assignments together.

Each virtual class begins with the teacher taking roll as students log into their Zoom classroom. Three days into the school year, Holmes said she’d had 100% attendance in all her classes.

“I feel good about it,” she said. “I think it’s going to be really up to teachers to keep the energy. If we lose our energy, the kids will lose theirs.”

She holds students to the same standards as if they were physically in her classroom, so they are prohibited to wear hats or hoodies, for example, even though they might be logging on from their bedrooms or backyards.

Halfway through her money-burning demonstration on Wednesday (spoiler: the cash doesn’t burn up because of chemical reactions involving isopropyl alcohol and water), Warren Snell, director of technology at Tracy Learning Center, had to remind Holmes to look at the camera in front of her and not at the screen showing the faces of her students at their computers.

“I’m not sure whose learning curve is higher, mine or the kids’,” Holmes said, but she was glad to be teaching again, even over the internet. “I really like the change in format from just meeting with them sometimes and giving them work to do. We are mimicking as best we can the in-classroom experience, and for Day 3, I think it’s going well.”

Holmes said her students had some minor issues, such as a delay in turning off “mute” when it was their turn to speak, that she thought would be resolved as they got more familiar with their new digital tools.

Mostly, she said, it was odd to be teaching in an empty classroom instead of a room full of teenagers.

“I miss the spontaneous laughter we have, and I’m beginning to see some of it on Zoom, but it’s kind of like filming without a soundtrack,” she said. “Now I have a little idea how our sports people feel when they get out on the field and there’s no one there to watch them. It’s very different.”

She encouraged the community as a whole to stay positive and to applaud local kids for how they have adapted to the challenges of this year, including distance learning.

“These students have risen to the occasion, stepped up to the plate and hit the ball,” Holmes said. “You don’t see them marching in front of the school saying, ‘We don’t want this, we don’t like that.’ They just step up the plate, and I think we need to recognize that in our young people.”