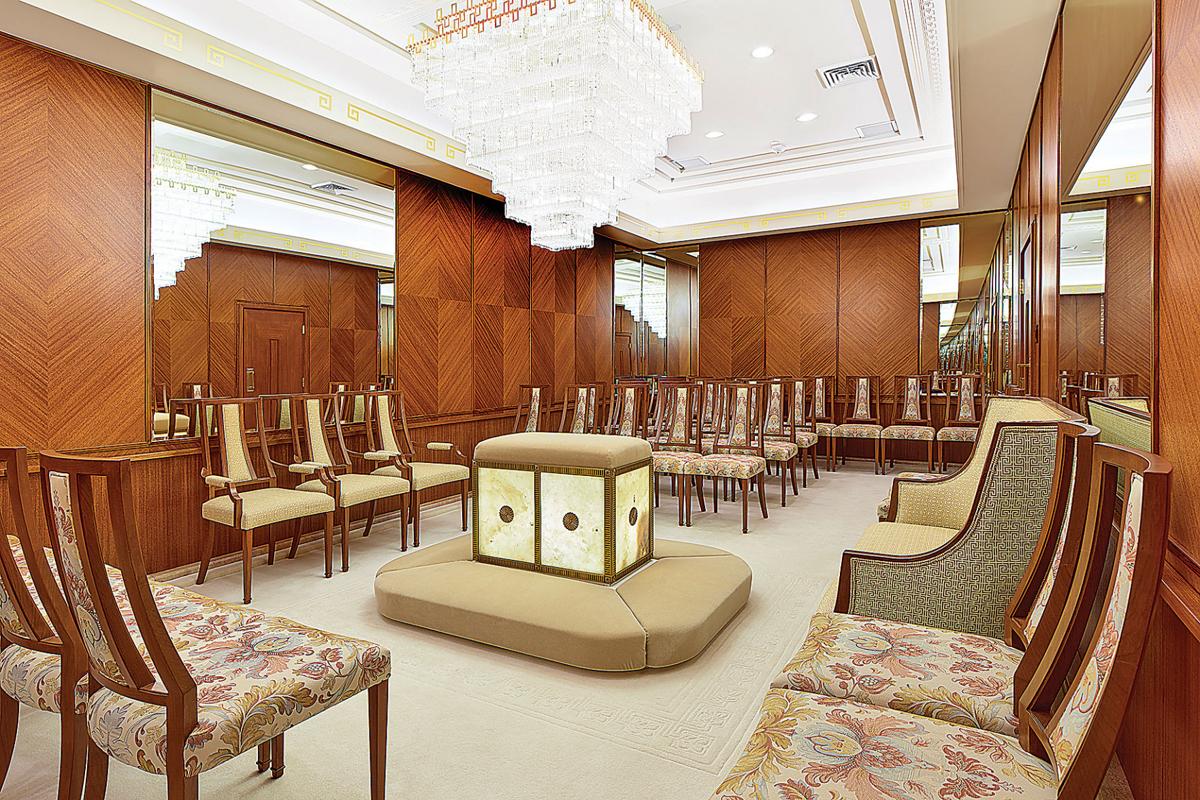 The sealing room in the Oakland temple of the Church of Jesus Christ of Latter-day Saints is used for weddings. 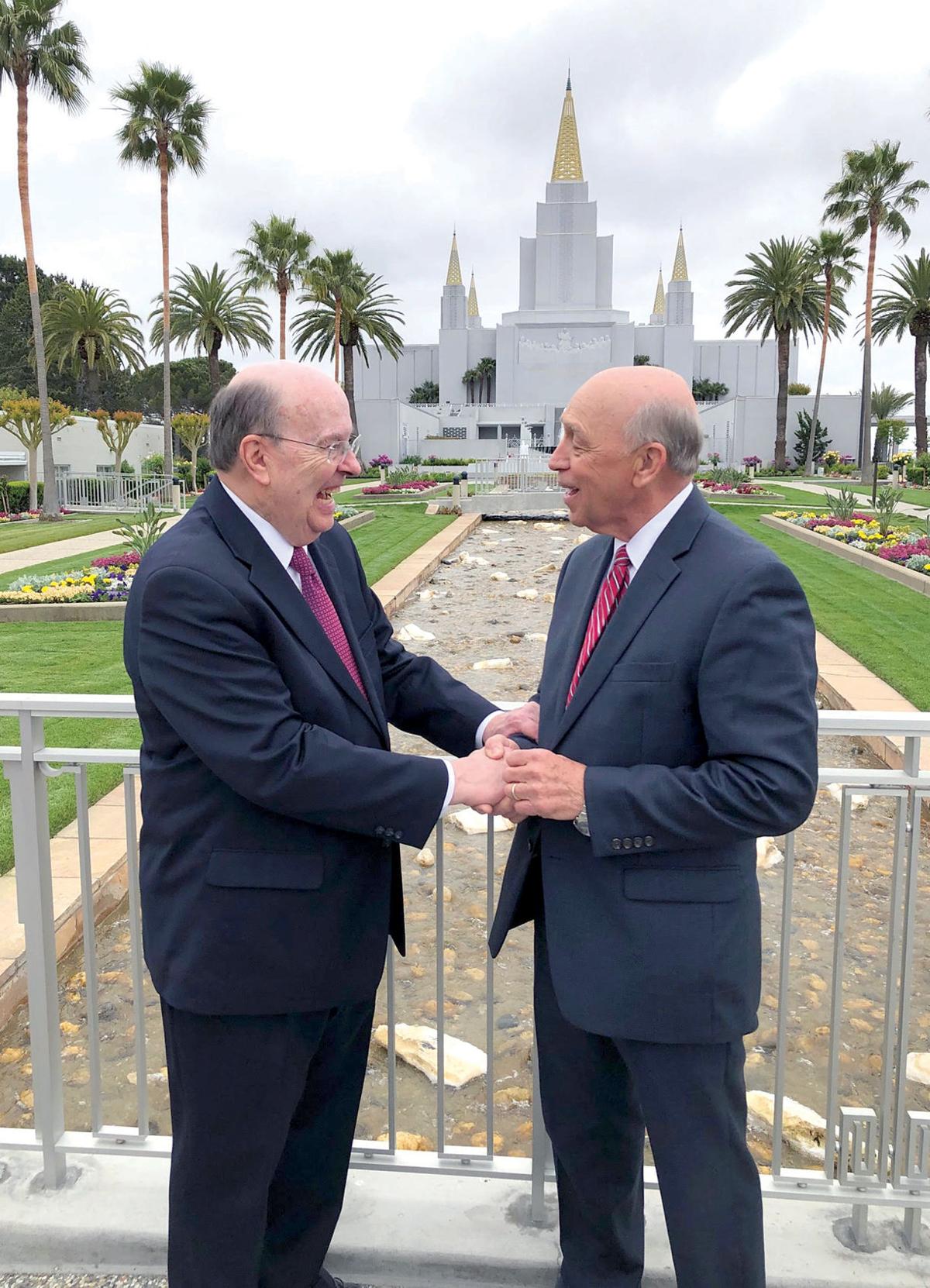 Quentin L. Cook (left), a member of the Quorum of the Twelve Apostles of the Church of Jesus Christ of Latter-day Saints, welcomes Tracy church member Ron Pepperman to a media tour of the church’s Oakland temple. After 55 years, the restored temple will be open to the public during the next three weeks.

The sealing room in the Oakland temple of the Church of Jesus Christ of Latter-day Saints is used for weddings.

Quentin L. Cook (left), a member of the Quorum of the Twelve Apostles of the Church of Jesus Christ of Latter-day Saints, welcomes Tracy church member Ron Pepperman to a media tour of the church’s Oakland temple. After 55 years, the restored temple will be open to the public during the next three weeks.

Driving into Oakland on Interstate 580 over the years, I have occasionally glanced up the hill to see towering white steeples of what I knew as the Mormon Temple.

I had only a vague notion of what went on inside the temple. Monday, I found out.

At the invitation of Tracyite Ron Pepperman, a public affairs committee member of the Church of Jesus Christ of Latter-day Saints’ Manteca Stake, I took part in media tours of the temple. Ron, who joined me in traveling to Oakland on Monday morning, told me the media event preceded the opening of the temple for the general public during the next three weeks.

The temple had been closed to the public for 55 years since its opening and initial dedication in November 1964. For the last two years, it was completely closed by a major restoration project. The three-week opening of the temple to non-members of the church is scheduled during the period between the completion of renovations and the rededication ceremonies that begin June 1.

And while over the years I have known the towering edifice as the Mormon Temple, the preferred name is the Oakland Temple of the Church of Jesus Christ of Latter-day Saints, which is used to stress the church’s Christian identity. Members don’t mind being called Mormons but appreciate the church being called by its full name. If a shorter version is required, the initials LDS are sometimes used.

For the first time in 55 years, the Oakland temple will be open to the public beginning this evening, when VIP tours are planned. Representatives of Tracy’s five LDS wards and Tracy public officials have been invited to take part.

But back to my temple media tour. Our group of about a dozen people was fortunate in having the tour led by Quentin Cook, a former San Francisco attorney who is a member of the Quorum of Twelve Apostles, the church’s ruling body in Salt Lake City, He was accompanied by Larry Wilson, executive director of the church’s Temple Department, which oversees 163 temples worldwide. Both are former Bay Area residents with a special attachment to the Oakland temple.

Before our tour started, Cook stressed that the church’s temples should not be considered as “secret,” but rather as “sacred” to members of the faith.

Although no photos were allowed to be taken inside the temple, both of our guides were open to any questions as they pointed out completed restoration work and the functions of the temple.

If public visitors to the temple expect to enter a large cathedral-like space, they will quickly learn that the 95,000-square-foot interior is composed of a number of smaller rooms connected by a series of corridors on several floors. (A large auditorium for gatherings and performances is located nearby on the temple grounds.)

The temple’s interior décor is subdued, with shades of tan and brown and traditional furnishings. The walls are covered with paintings with religious themes and also a number of views of California scenes.

We first visited the baptistry, where full-immersion baptisms are performed. Surprisingly, to me anyway, was the information that those now being baptized are not babies and young children but adult members representing ancestors who were not members of the faith. Through baptism, they will join family members in eternity, according to church doctrine.

The practice says a lot about the church’s emphasis on genealogy.

A 176-seat Instruction Room is used for sessions on church teachings — for relatively newer church members and older ones alike. Those attending the sessions must present a recommendation signed by their local bishop and a senior member.

The smaller Sealing Room is where wedding ceremonies take place. The bride and groom, wearing white robes, kneel before a central padded altar while the “sealing” ceremony is conducted before close relatives seated nearby. Until recently, when the ruling was eliminated, couples who were married in civil ceremonies had to wait at least a year before being admitted to the temple to be sealed.

Those sealed receive the promise that they and their family members will forever be united in eternity.

Another major facility of the temple is the Celestial Room, where members meditate about aspects of their faith.

In all, I found the restored Oakland temple carries out, in a traditional, subdued manner, the solemn atmosphere intended for conducting key rituals of the Church of Jesus Christ of Latter-day Saints.

The Oakland temple at 4770 Lincoln Ave. is well worth a visit. For members of the public, this has to take place within the next three weeks, except on Sundays.

Those interested in touring the Oakland temple can make free reservations online at OaklandTemple.org. A good local contact is Ron Pepperman, (408) 685-8385.

Sam Matthews, Tracy Press publisher emeritus, can be reached at 830-0234 or be email at shm@tracypress.com.