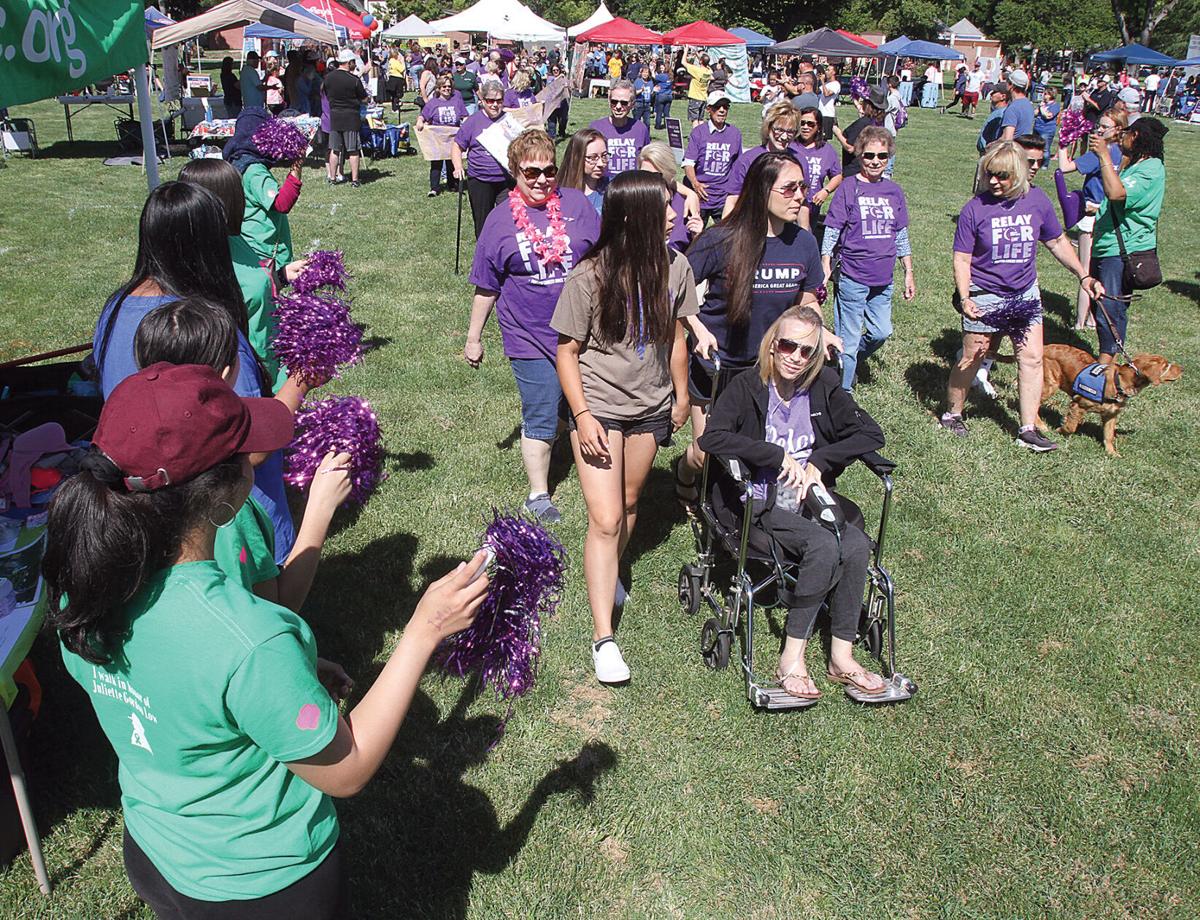 Girl Scouts cheer on cancer survivors during the first lap of the Relay For Life of Tracy-Mountain House at Lincoln Park in 2019. 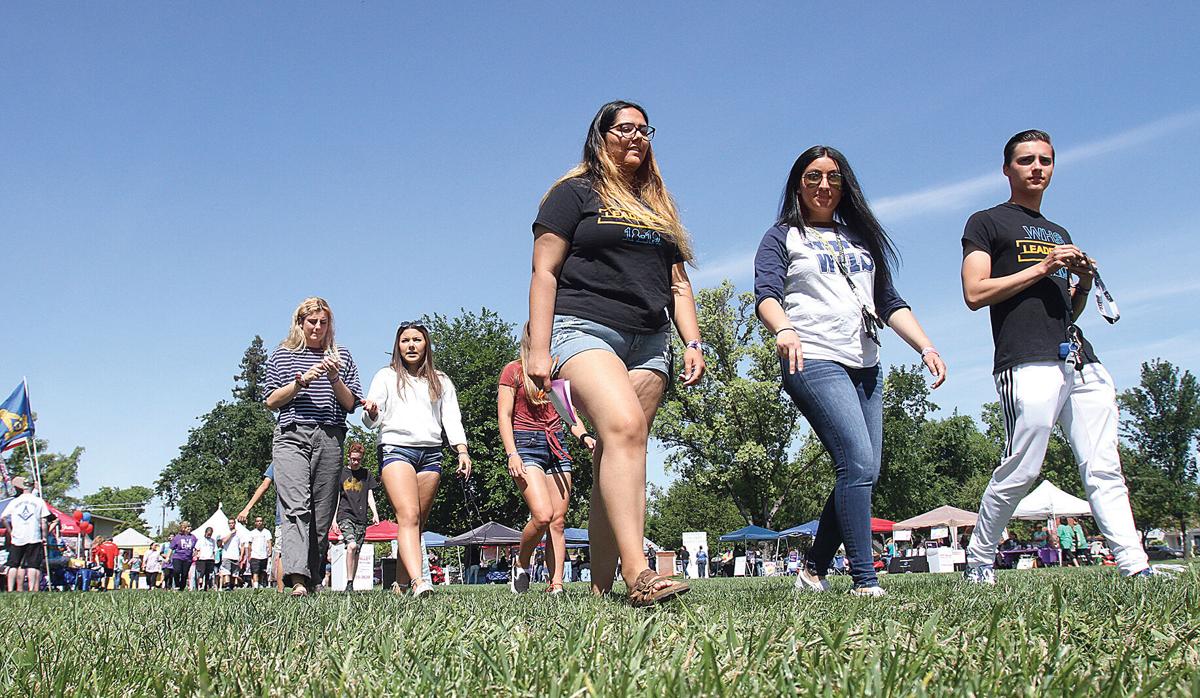 People walk a lap of the Relay For Life of Tracy-Mountain House at its new venue at Lincoln Park in 2019.

Girl Scouts cheer on cancer survivors during the first lap of the Relay For Life of Tracy-Mountain House at Lincoln Park in 2019.

People walk a lap of the Relay For Life of Tracy-Mountain House at its new venue at Lincoln Park in 2019.

For dedicated Relay for Life teams that “bleed purple,” a worldwide pandemic isn’t a good enough reason to let up on the fight against cancer.

Participants in the 20th Annual Relay for Life of Tracy-Mountain House will take to their cars to honor cancer survivors and raise money for the American Cancer Society in a drive-up format Aug. 22.

Jamie Flint, who leads the people organizing the event, said their plans to make a splash in honor of the relay’s 20th year in Tracy would wait a year.

“There are so many changes and we can’t make it such a big birthday party as we originally wanted to,” Flint said. “We’re still going to celebrate our survivors and still have a celebratory kind of event, but we’re going to save the big party for 2021.

“We’re going to hit the ground running hard. Everything we had planned for this year has been postponed to the May 16, 2021, date or somewhere the week of. Things are already on the roll for next year, and I’m ready to hit that hard.”

The first 11 Tracy relays were in Tracy High’s football stadium, where teams camped out overnight on the grass and walked laps around the dirt track and set up fundraising booths, raffles and entertainment.

The school district’s renovation of the stadium and conversion to artificial turf required the relay to find new venues over the years since then: a practice field at Kimball High School, a parking lot at the West Valley Mall, the quad at West High School and, last year, Lincoln Park. The Mountain House and Tracy relays merged in 2018.

Relay teams had planned to return to Lincoln Park to celebrate the 20th year in Tracy with new activities, including a car show, vendors and food trucks, and a “Bark for Life” canine fundraising event in conjunction with the May 16 relay. Instead, the spread of COVID-19 led the organizing committee to brainstorm new plans.

“Obviously the world was struck with the pandemic and we had to put the brakes on and put our thinking caps back on and redecide what we wanted to do,” Flint said.

The relay committee surveyed participants in the spring to see whether they wanted to have some kind of event anyway, postpone it, or cancel it altogether. They even considered going virtual and taking the relay online.

“I did a Facebook poll and the resounding response was that it was too important to cancel, so let’s postpone it,” Flint said.

They chose Aug. 22 as the new date in hopes the coronavirus might be better controlled by then. The committee had already been planning a car show in the park in late August.

“But when the pandemic continued we had to again come together and say what are we going to do,” Flint said.

The latest incarnation of the event has been dubbed “Relay’s Trunk or Relay.” Inspired by Halloween trunk-or-treating, it will have cars arranged in rows, tentatively in the parking lot of St. Paul’s Lutheran Church, 1635 Chester Drive, from 6 to 9 p.m. Aug. 22. A DJ will keep the energy high. People can park and watch as relay participants drive laps to show their support.

“We are going to encourage participants to decorate their cars as you would decorate your campsite,” Flint said.

She said people can sell craft items or raffle baskets out of their trunks with careful social distancing. There will be dedicated parking spots for people who want get out of their cars.

A luminaria ceremony, the traditional end to the relay, will honor cancer survivors and memorialize people who have died from cancer.

As in the past, cancer survivors and their support people will kick off the relay celebration with a special lap from 6 to 6:30 p.m. Survivors who sign up will get a bag of goodies.

“We’re really encouraging all survivors to go the website and register. Our survivor committee has a really good welcoming and celebratory event planned for them that night,” Flint said. “We’re still honoring those we have in our community.”

Nominations for the annual survivor of the year and caregiver of the year awards are being accepted now through Aug. 15. Nomination forms can be found on the relay’s Facebook page and the Tracy relay’s page at www.relayforlife.org.

Relay for Life has always been a fundraising event in support of the American Cancer Society’s outreach, research and advocacy programs, and local teams still plan to fundraise together this summer.

“I’ve talked to a couple of team captains about this change and they are still enthusiastic to participate, decorate their cars, park them and sell their items,” Flint said. “They kind of like this secondary Plan B option. It gives them an opportunity to give back and celebrate.”

Teams have a chance to get an early start on fundraising with an “Illuminate Hope” regional luminaria event Aug. 1. People can make a donation and decorate a luminaria paper bag — or a printable representation of one — to place on the doorstep or tape to the front door, and then share pictures on social media.

Flint was adamant that, no matter what, the relay would go on.

“The pandemic has put a lot of people I think in a different mode. We want to let them know relay is still pumping, still bleeding purple, still going through,” she said. “We’re still here and still fighting the fight and we want people to know that.”