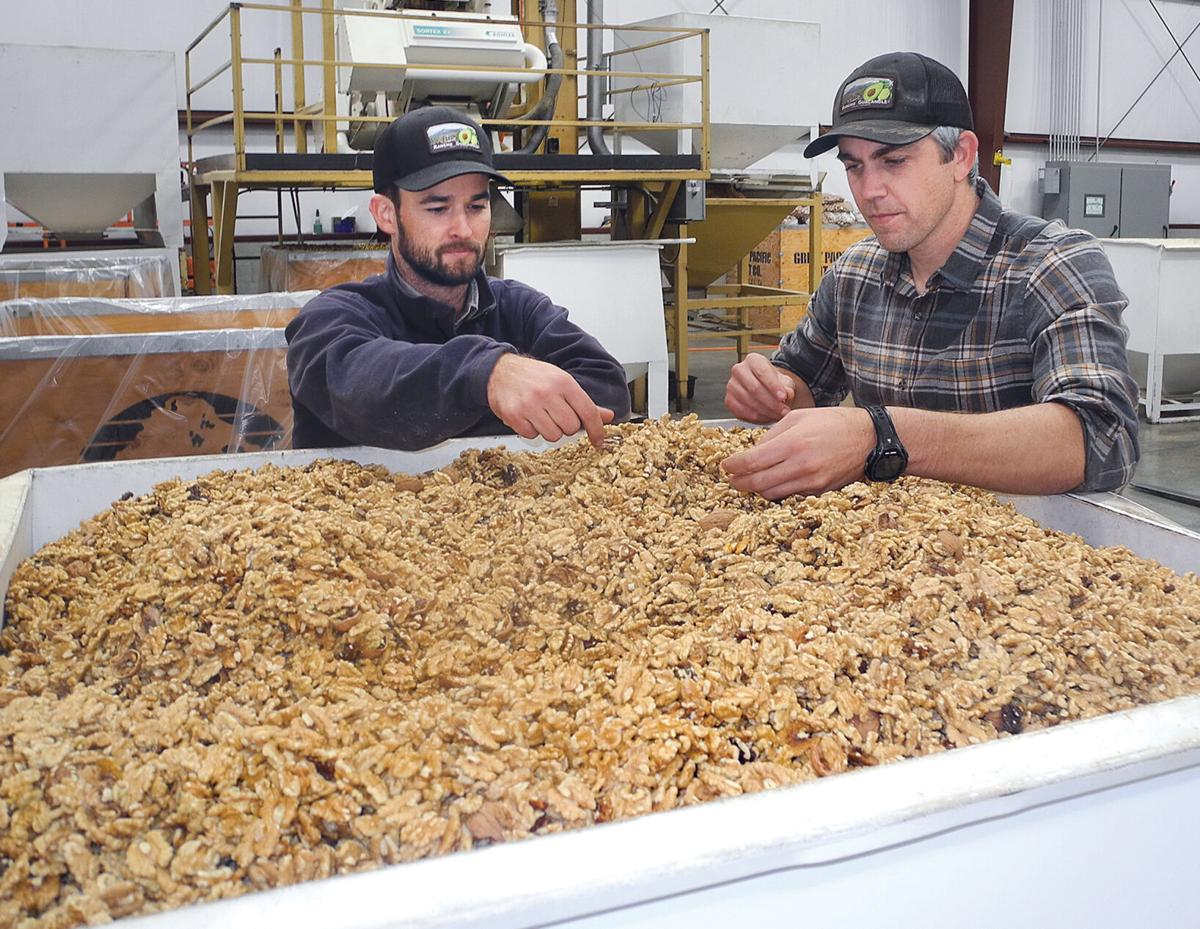 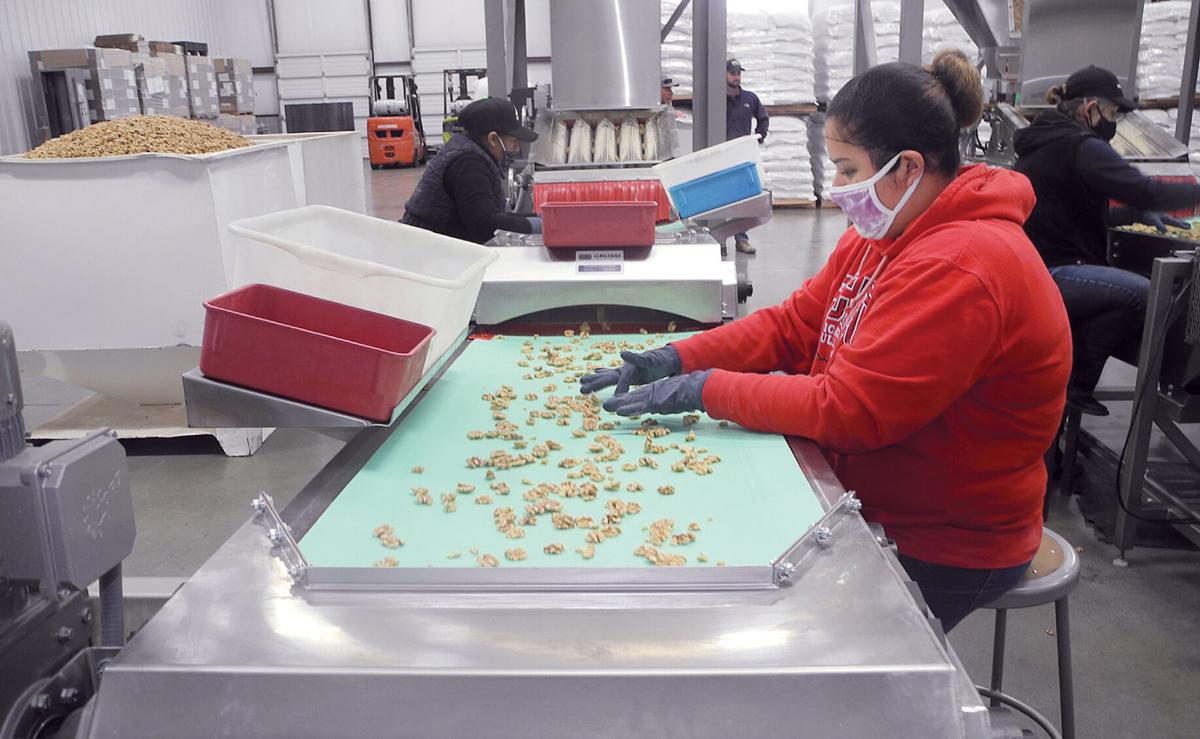 Hand sorting is the last step of processing walnut kernels before they are packaged and shipped from the Great Pacific Nut Co. plant on Lehman Road.

Hand sorting is the last step of processing walnut kernels before they are packaged and shipped from the Great Pacific Nut Co. plant on Lehman Road.

Although Tracy area’s walnut growers, like those throughout California, continue to be faced with depressed prices, an increased local dimension is taking place in expanding walnut processing and sales.

It’s all happening at a new 30,000-square foot building recently completed in a rural area southeast of Tracy on Lehman Road near the intersection of Interstate 5 and Highway 33.

And while administrative and sales operations remain temporarily in a nearby prefabricated building, the processing, storing and shipping of up to 75 tons of walnuts a day are well underway in the new structure owned by the Great Pacific Nut Co.

The 10-year-old firm is operated by Chris Reece and Dan Hepler, two natives of Tracy who graduated together from Cal Poly-San Luis Obispo.

In recent months, the firm’s operations have been moved from smaller, cramped quarters near Westley to the new building. Much of the processing machinery now in use came from Westley.

At the new facility on a 13-acre site, as many as 15 loads of unshelled walnuts arrive daily in double-hopper trucks from regional huller-dryers, where hulls had been removed from harvested nuts.

The arriving walnuts are first logged in with grower IDs, which are essential in keeping tabs on walnuts that remain property of growers while being processed and sold. The next step is fumigation of the unshelled walnuts in a satellite building overnight to rid them of any insects, mouths or worms.

Once in the main processing building, the walnuts are divided by size, and 70 percent are cracked into either halves or pieces and divided by the color of the kernels. Halves of lighter color are the most desired. Hand inspection on conveyer belts is the final step of processing. Before being bagged and shipped, kernels from cracked walnuts are packaged into 25-pound plastic bags, and the in-shell walnuts are shipped in 55-pound bags.

The bags, containing a total of 42,000 pounds of walnuts, are loaded into shipping containers for delivery either in the U.S. or overseas.

Halves of lighter color are the top-priced cracked walnuts shipped from the new processing plant. Some customers prefer as much as 80 percent or more of halves and the rest large pieces, but there is a variety of mixes, some as low as 20 or 30 percent halves, depending on how the customer plans to use the walnuts.

The uncracked 30 percent of the incoming walnuts remain in their shells for shipping to “in-shell” customers.

Hepler, a 2004 West High graduate who holds a Cal Poly degree in industrial engineering, is in charge of the processing operations. He said cleanliness is an absolute necessity in order to stay within government guidelines required of firms handling food.

Reece, who graduated from Tracy High the same year, studied agricultural economics at Cal Poly and earned his degree in construction management. He is in charge of contacts with both growers and customers and handles company logistics.

Reece reported that after college both he and Hepler worked in San Francisco with their degree occupations before returning to Tracy to enter into their own business.

The fact that Hepler had served a student internship at the Diamond Walnut plant in Stockton, and Reece’s family grows walnuts steered them toward walnuts.

“We knew if we came back out here to Tracy and do our best working in the ag community, we would have a chance to start our own business and have a pretty good lifestyle,” Reece said.

While market conditions for California walnuts, including tariff wars, were already a challenge, the COVID-19 pandemic has added problems to it in the past 9 months. Prices for walnut kernels have settled into the 65- to 70-cents-per-pound range, which many growers feel is break-even territory.

But there are some rays of hope for processing and selling Tracy walnuts in the future. The quality and yields of this year’s crop has been top-notch, and more young trees are coming into production. And, too, the popularity of walnuts as a healthy food for snacking and food-preparation is on the increase.

In addition to the domestic market, Great Pacific Nut Co. sells walnuts to Asian, European and Middle Eastern customers. An end to trade wars will benefit sales to those overseas customers

Reece and Kepler note that India is a major customer, even though it imports only in-shell walnuts because of a well-established hand-cracking network. Turkey is a center of hand-cracking in the Middle East.

South Korea and Japan are picky about quality and buy mostly half kernels, especially those of lighter color. Both countries do a better job than most American grocery stores in promoting walnuts in a variety of forms as snack food, they said.

“European customers are very price-sensitive, so we have to realize that in dealing with them,” Reece said. “Working with customers with different interests is an important part of our jobs. We take it seriously.”

He added: “Now if American food retailers can do more in featuring walnuts as snacks and for other uses, that would be a welcome development.”

Sam Matthews, Tracy Press publisher emeritus, can be reached at 830-4234 or by email at shm@tracypress .com.