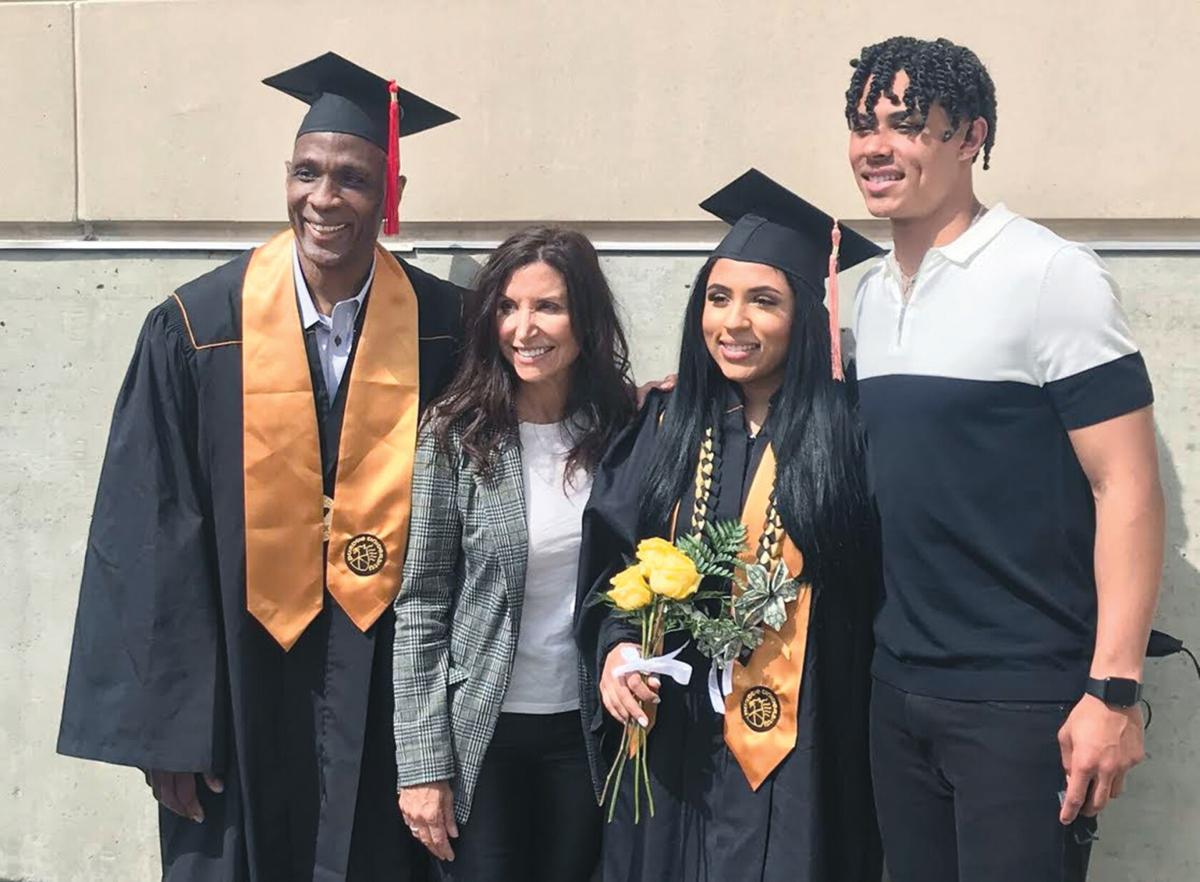 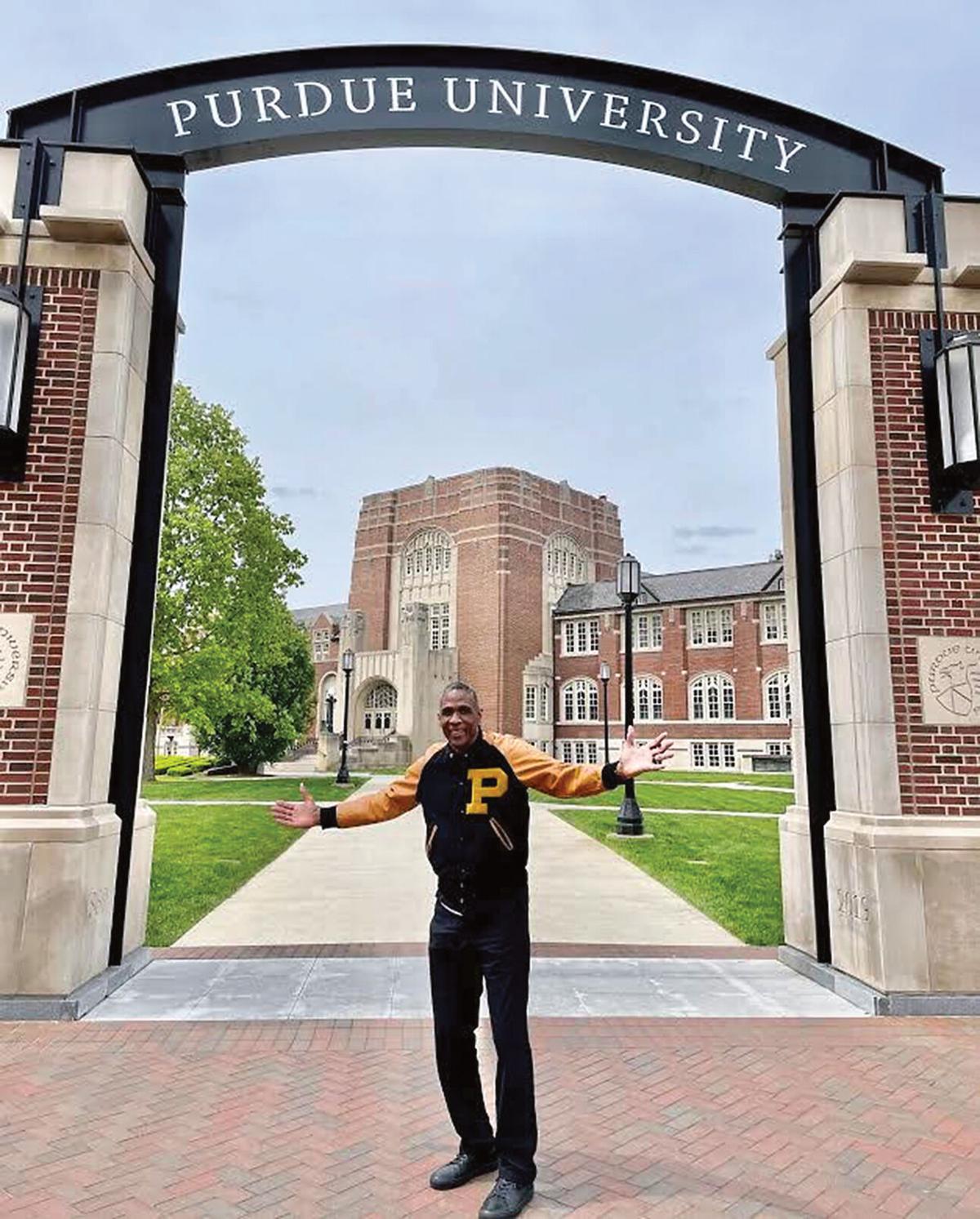 Keena Turner wore his four-decades-old Purdue Letterman’s jacket while standing in the university’s gateway on the campus in West Lafayette, Ind.

Keena Turner wore his four-decades-old Purdue Letterman’s jacket while standing in the university’s gateway on the campus in West Lafayette, Ind.

A trip to Indiana for the college graduation of two members of Tracy’s Turner family turned out to create far more than usual interest — and generate nationwide news coverage.

It revolved around Ella Turner, younger daughter of Keena and Linda Turner, graduating May 15 from Purdue University in Lafayette, Indiana, in the same ceremony as her father.

Keena, the one-time Boilermaker football standout and a linebacker with four 49ers Super Bowl champion teams, had left Purdue in 1979 several units short of a degree and was returning more than four decades later to receive his diploma with his daughter.

The father and daughter marched side-by-side that Saturday into Purdue’s Ross-Ade Stadium to receive their diplomas.

At the graduation ceremony, Ella, a 2017 graduate of Tracy High, received her degree in Selling and Sales Management.

For Keena, the ceremony marked a graduation delayed 42 years. In the past year, he had finally earned the last few college credits needed to receive his Purdue degree in Organizational Leadership.

“It was Ella’s day, but it was a wonderful experience for me to be part of it,” Keena said after the service. “And it was great for me to come full circle and return to Purdue to receive my degree.”

Ella, a 2017 graduate of Tracy High who plans to begin her working career in Arizona, said it was an exciting experience graduating with her father.

News that Keena had returned to Purdue in order to receive his long-delayed college degree at the same time as his daughter received her degree, soon spread throughout the Purdue campus.

Joe Duhownik, a reporter for the student newspaper, the Purdue Exponent, caught wind of the Turner family’s arrival two days before graduation and interviewed them — at the campus Union Club Hotel. On hand for the interview were Keena, Linda, Ella, and Ella’s brother, Miles, a student at the University of Portland and member of the basketball team. An older sister, Sheena, was unable to be there. She attended USC, earned a Ph.D. and is now a teacher.

The story ran in The Exponent on Friday, May 14, the day before graduation.

“Joe was very thorough in interviewing us and writing the story,” reported Linda. “Members of the John Purdue Club, which supports student athletics at Purdue, read the story, and they alerted all their members. The news coverage just kept bubbling up from there.”

News media in Keena’s hometown of Chicago gave the story expanded coverage as did TV stations in the Bay Area, along with an incisive column by sports writer Matt Maiocco and a major spread on the front page of Chronicle’s Green Sheet.

“At first, we were surprised at the widespread interest in the story, but we soon realized it had many positive elements in telling of a professional athlete returning to the campus with his family to receive his diploma after so many years,” Linda said. “The fact that Keena was joined in the graduation ceremony by our daughter, Ella, made it even more appealing.”

Keena said that because of the coverage, he has heard from a number of people — “some friends and some I didn’t know. There has been a real outpouring of support.”

In the later-portion of his 11 seasons playing for the 49ers, Keena attended classes at the University of San Francisco in order to earn a bachelor’s degree when he retired as a player.

But members of his family urged him to also go after a degree at Purdue, especially after Ella had enrolled there.

To work toward his degree, Keena signed up for Purdue on-line classes in physical geography and supply-chain management.

A friend of his in Tracy, learning of that, made contact with an employee at the Kellogg’s distribution center in Tracy’s Northeast Industrial Tract. He arranged for Keena to visit the warehouse to see how they managed their supply-chain operations. Keena wrote his class paper on what he learned at Kellogg’s in Tracy.

At the 49ers team offices, which had moved several years ago to Levi’s Stadium in Santa Clara, Keena has held several management positions and now is vice president and senior adviser to General Manager John Lynch.

She said this year’s tournament is scheduled for June 21, and she hopes the Turners’ story will remind more people to support the tournament.

In the last few days, Keena has been contacted by officials of the National Football League, asking him to help promote increased participation in an existing NFL program encouraging NFL players who hadn’t received their college degrees to enroll in classes to earn their diplomas.

Keena Turner and his family provide a great example of what the NFL program can achieve. In the process, they are making their hometown proud.