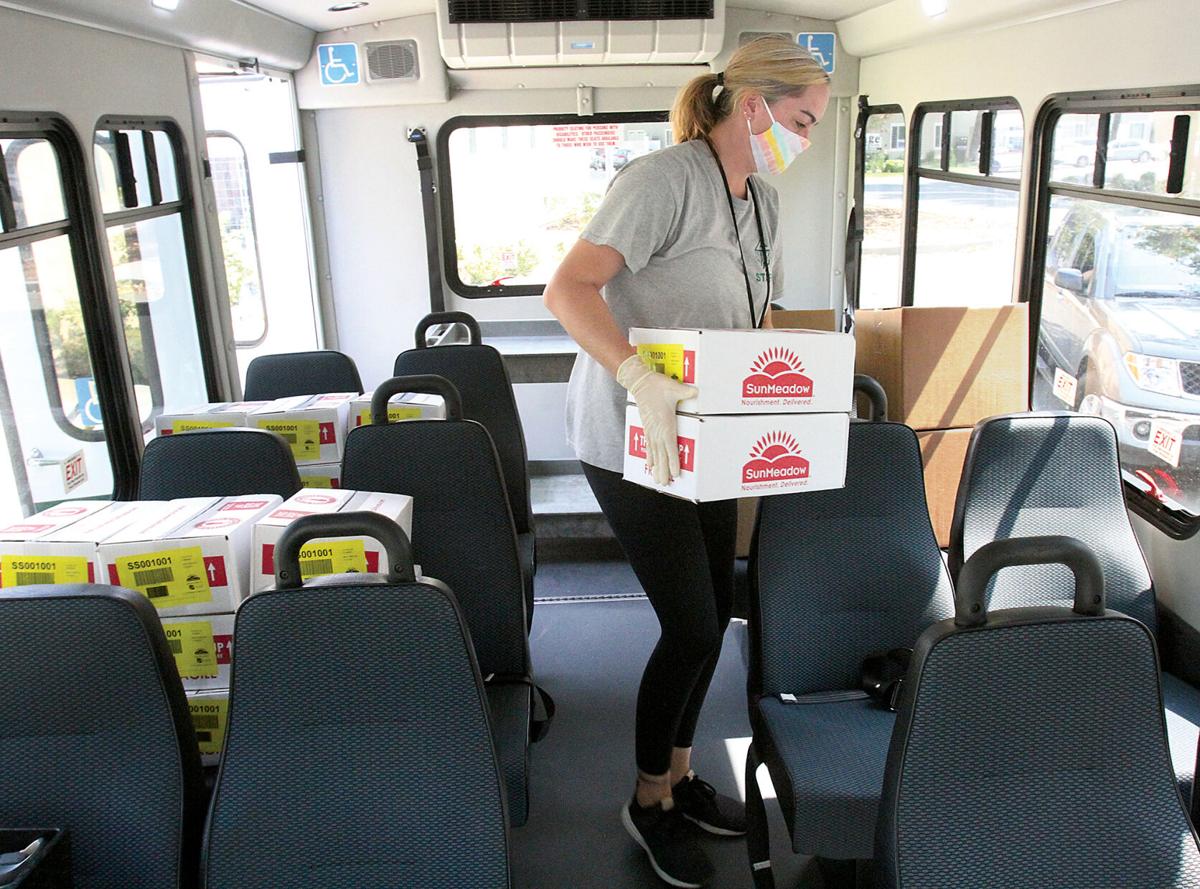 Recreation coordinator Amanda Jensen, who works at Lolly Hansen Senior Center, loads lunches into a Tracer bus that will deliver them to people’s homes Thursday afternoon. 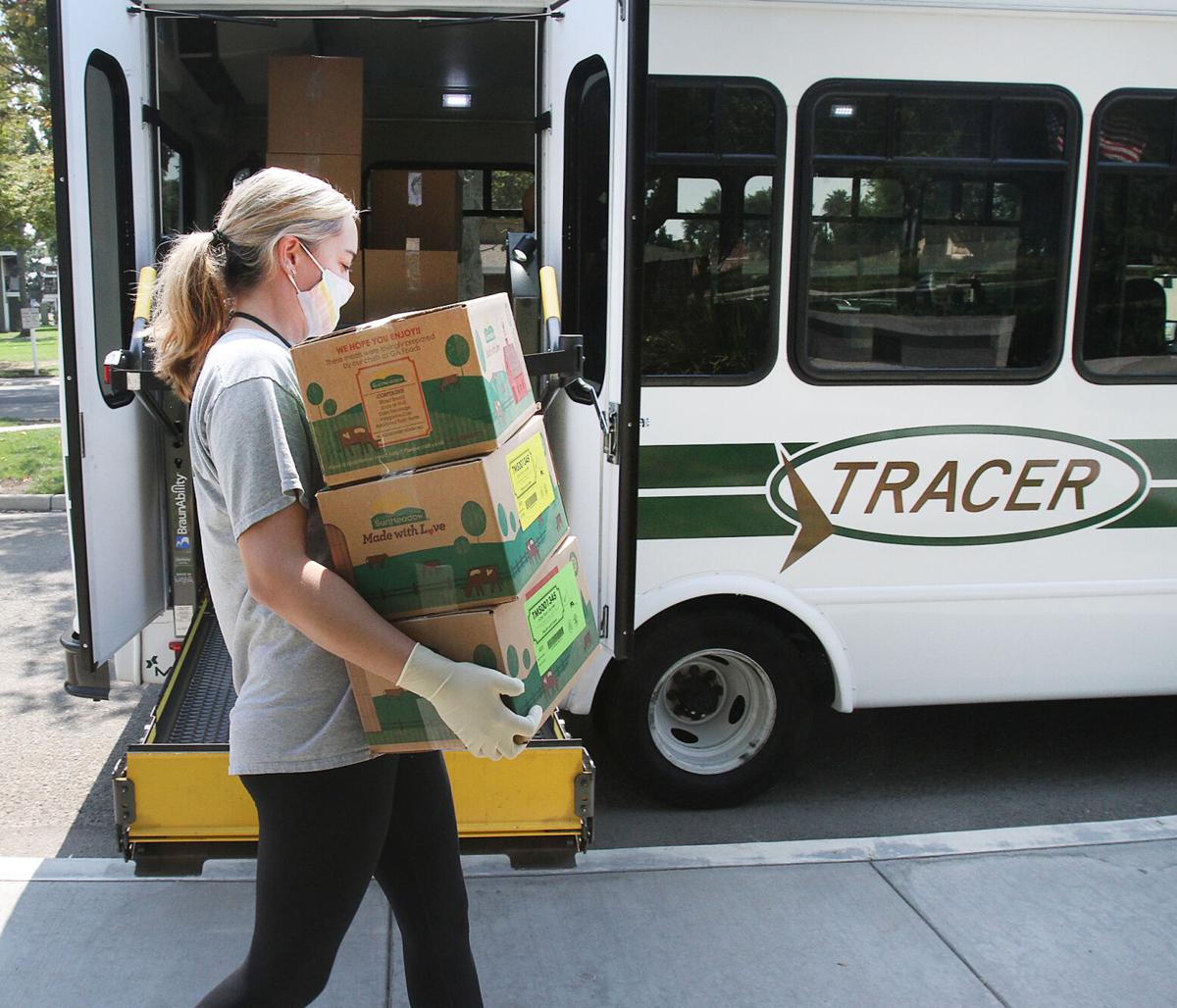 Recreation coordinator Amanda Jensen, who works at Lolly Hansen Senior Center, carries some of the 85 lunches being delivered by Tracer bus to local homes on Thursday afternoon. 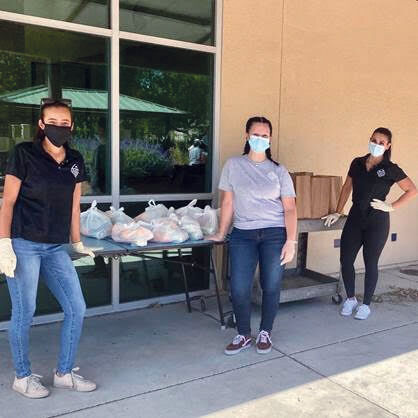 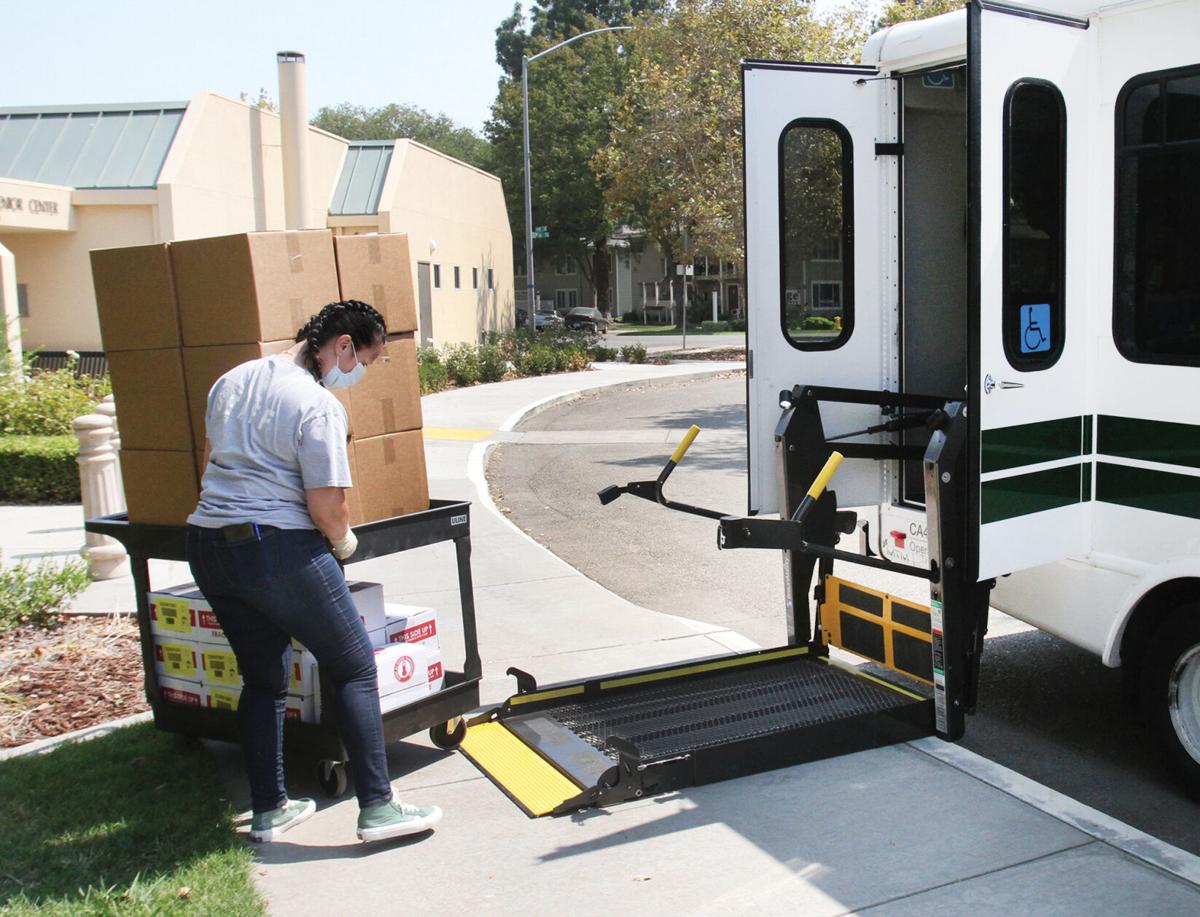 Suzette Lovell loads a cart full of lunches onto a Tracer bus that will deliver the meals to people’s homes Thursday afternoon.

Recreation coordinator Amanda Jensen, who works at Lolly Hansen Senior Center, loads lunches into a Tracer bus that will deliver them to people’s homes Thursday afternoon.

Recreation coordinator Amanda Jensen, who works at Lolly Hansen Senior Center, carries some of the 85 lunches being delivered by Tracer bus to local homes on Thursday afternoon.

Suzette Lovell loads a cart full of lunches onto a Tracer bus that will deliver the meals to people’s homes Thursday afternoon.

As many older Tracy residents retreated into their homes at the start of the COVID-19 pandemic this spring, it became clear that the Lolly Hansen Senior Center would have a different role to play in the months to come.

The senior center was closed March 13 after local officials declared a public health emergency and shut down facilities across the city. Many, including the senior center, remain closed.

Recreation coordinator Amanda Jensen was involved in the conversations about how to continue to serve people who normally visited the center to socialize, exercise, or get food and other resources. The staff made a list of names and started reaching out regularly.

“Very early on, we realized that contacting our participants to stay in touch with them and provide wellness calls was one of our top priorities,” Jensen said. “So we were able to reach over 1,000 participants, and those that were in need of services were referred to various resources, both locally and within the county.”

Jensen said she and the other three staff members still have a list of about 25 people they call weekly to check in.

“They are seniors that did not have the family, like I mentioned, nearby to make sure they have enough to eat or if there are any new resources they needed or just a friendly ear to talk to,” Jensen said. “A lot of them are dropping off where they don’t need the weekly calls anymore, but I think it was crucial and still is crucial for some of them.”

Jolene Jauregui-Correll, recreation services supervisor, said the center’s staff had help from city employees at the Grand Theatre Center of the Arts, which also remains closed to the public.

“Part of that goal was, as a city, was to reach out to our seniors and do that well check knowing that this was a new pandemic to everybody,” she said. “It’s something we thought of as a team to put together and try and call over 1,000 seniors, and then looking at all our registered seniors — I believe we went back to 2015 — just to do those wellness checks.”

Some of the senior center’s essential services have transitioned into new formats as the pandemic has stretched on.

Meals served at the center have been converted into boxed lunches that people age 60 and up can pick up on Thursdays between 11 a.m. and noon or have delivered to their homes between 2 and 5 p.m. Since the end of March, that program has served more than 250 people in the Tracy community.

The city’s Tracer transit system is helping with deliveries, which Jauregui-Correll said provided a weekly check-in for the recipients.

“It’s another outlet where staff can see hands on,” she said. “They’re not allowed to enter the house, but meeting by the door, they’re able to see ‘OK, they look good’ or ‘Oh, that person, they need some resources’ that way, and they’ve done that a few times.”

The staff at the senior center has also stepped in to support two food security programs that are normally run by older volunteers. The Second Harvest brown bag program and the Emergency Food Bank farmers market both lost a large part of their volunteer staff when stay-at-home orders went out.

“On both those programs, due to the pandemic, a lot of these nonprofits weren’t able to keep their volunteers or staff because a lot of them were older adults, so our senior center staff stepped up to make sure we were providing an essential service to seniors,” Jauregui-Correll said. “We’ve been more hands-on than in the past.”

The brown bag program takes place on the first and third Wednesday of each month from 8:30 to 10:30 a.m. at the senior center, providing a bag of produce and a bag of shelf-stable food. The farmers market is set up at the senior center on the fourth Wednesday of each month from 11:15 a.m. to 12:15 p.m., offering fresh fruits and vegetables on a first-come, first-served basis. Both programs are open to anyone age 60 and up.

“We have a lot of people calling with interest in joining into our game, and in September, we will be doing fitness programs as well,” Jensen said.

Bingo games will start at 1:30 p.m. each Friday. There’s no charge for people age 50 and up, and prizes will be awarded after each game.

Low-impact virtual fitness classes are in the works. Initial offerings will include a chair exercise class and a standing exercise class. They are likely to be similar to the hourlong classes offered by the senior center before the pandemic, but the duration might change.

People wanting to try out the virtual bingo games or fitness classes can call the senior center at 831-6240, send email to tracyseniorcenter@cityoftracy.org, or visit www.facebook.com/TracySeniorCenter.

Continuing on, Jauregui-Correll said the staff was going to revisit the wellness call list to see what sort of help Tracy’s older adults might need now, whether that’s better access to nutritious food, delivery of prescription medications, or other services “that they may be afraid to or just don’t want to ask for.”

She also wanted people to know they could always call on Lolly Hansen Senior Center for help or friendly conversation.

“Our senior center, although it’s not open for daily programming, we have the email, the phone number, the Facebook page,” Jauregui-Correll said. “Our staff is available to assist them, provide resources, or just to talk, and we really want our seniors to know that.”

Some of the Lolly Hansen Senior Center’s essential services have transitioned into new formats as the pandemic has stretched on:

Bingo games will start at 1:30 p.m. each Friday on Zoom. There’s no charge for people age 50 and up, and prizes will be awarded after each game. To sign up, call 831-6240, email tracyseniorcenter@cityoftracy.org, or visit www.facebook.com/TracySeniorCenter.

Low-impact fitness classes will be starting soon, also on Zoom. People can call or email the senior center staff to learn more.

People age 60 and up can pick up boxed lunches on Thursdays, 11 a.m.-noon, or arrange a delivery.

A bag of produce and a bag of shelf-stable food are provided to anyone 60 and up on the first and third Wednesday of each month, 8:30-10:30 a.m.