Pickers standing on a moving platform reach for cherries in a orchard east of town. The platform was getting its first field in a local cherry orchard test Wednesday. 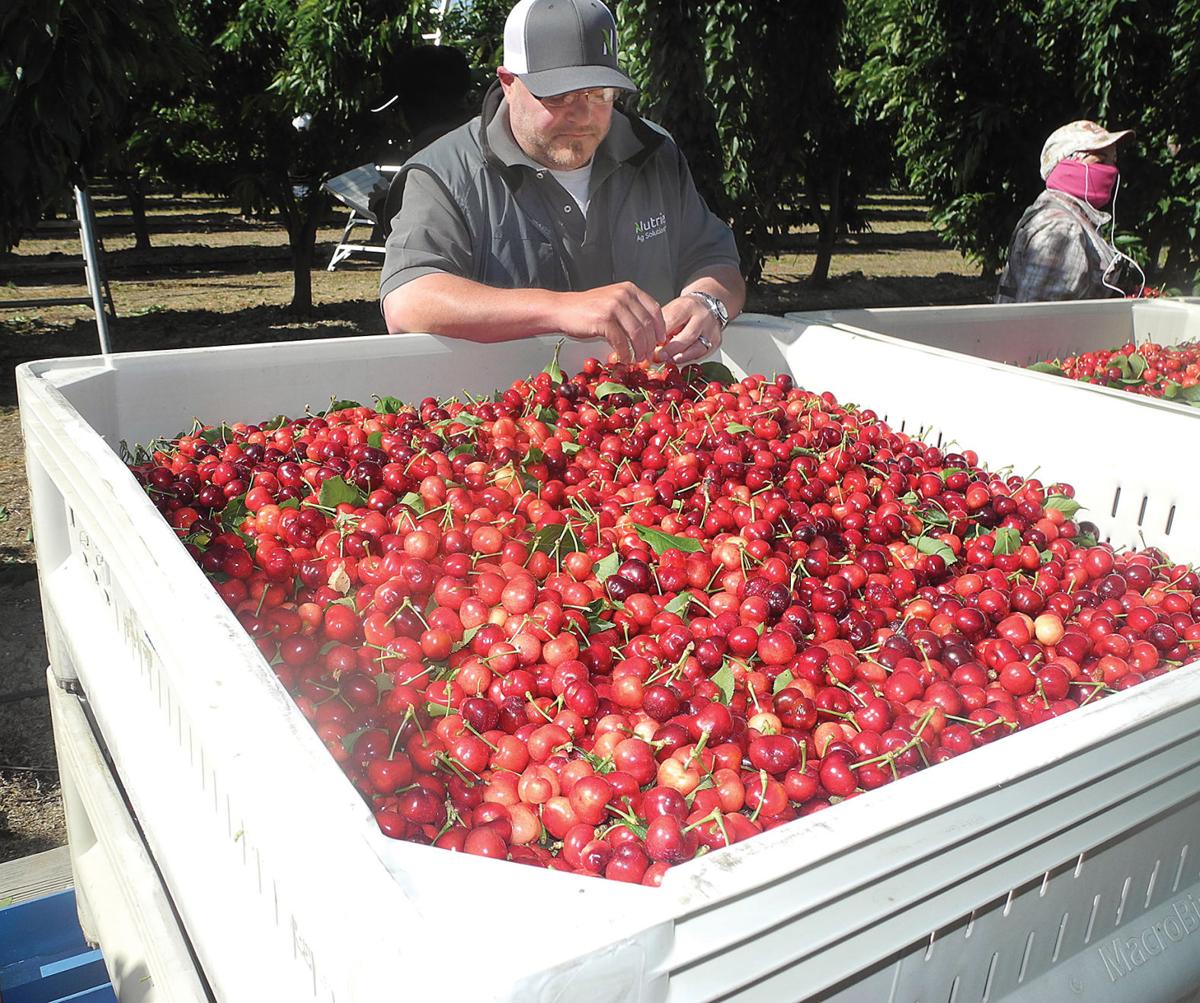 Mike Rinauro, a third-generation Tracy cherry grower, checks cherries from an orchard east of town. The crop is light, just above half of normal, but the quality is excellent.

As the Tracy area’s light but high-quality cherry harvest gains momentum this week, a newcomer to cherry orchards — a moving platform that transports pickers efficiently toward the cherries that are being pulled from the tree branches — is getting its first test.

In years past, pickers have either stood on the ground or climbed ladders to reach clusters of fruit in rows of trees. The platform changes that.

In a cherry orchard east of town Wednesday morning, four pickers were standing, two on each side, on a self-moving platform that was making its way between rows of 3-year-old cherry trees.

The self-propelled metal platform moved along slowly, 4 or 5 feet per minute, a speed that allowed the pickers time to strip cherries from the tree branches and pour them into a plastic bin at the center of the platform.

Photo sensors on the platform kept it centered between the rows of trees.

What was happening was the first trial run to see if a moving platform that has been used to harvest larger fruit, mostly apples and peaches, can be adapted for harvesting cherries.

The machine, called a Fruit Rabbit, is the product of Jack Rabbit, a Ripon firm specializing in farm mechanization equipment. Several representatives of Jack Rabbit were standing near the machine along with grower-fieldman Mike Rinauro of Tracy as the platform, powered by a small diesel engine, inched its way between the rows of trees.

It was early in the trial run of the moving platform — actually in the first row — but the Jack Rabbit guys were encouraged about what they saw and by the platform’s potential in the cherry harvest. The crucial test was that the pickers were able to reach cherries on different levels of the trees.

Ray Williams, Jack Rabbit regional manager, commented that the platform was “working very well,” noting that the platform raises pickers to a height of 11 feet, the same height of fruit grown on trellises and the height to which cherry trees are now being pruned.

Rinauro, a third-generation cherry grower, said the platform could also be used in pruning trees in the winter months.

“If you can use the platform for two major operations of growing cherries, then it could have a real impact in lowering manpower costs,” he said.

This year’s cherry harvest in the Tracy area kicked off last week and should continue for at least another 10 days, reported Rinauro, who, in addition to being a partner in growing cherries, is a field representative of the Chinchiolo Stemilt packing and shipping firm in Stockton.

“This year’s cherry crop in the Tracy area is just a bit above being half of a normal year,” he reported. “We didn’t have as many ‘chill hours’ as normal, so the trees did not go dormant as long as needed.”

Quality, however, is excellent, with good size, taste and color, Rinauro said.

Cherry growing has made a major comeback in the Tracy area during the last few years with about 700 acres planted, including a number of young trees.

The Coral variety, which is similar to the traditional Bing variety, dominates the Tracy orchards, but some early-maturing varieties, Tioga and Royal Hazel, have been planted to provide quality fruit for the early market before other cherry producers in the county ramp up their harvests.

So far, there have been enough pickers for the Tracy-area harvest. The men and women, many from Merced County, all wear face masks and keep a good distance apart to guard against the spread of COVID-19. In the packing sheds, extensive anticoronavirus precautions are being taken, reports the California Cherry Growers Association, which represents 600 growers.

The California cherry-harvest season starts in Bakersfield and moves north. Tracy and Patterson-area orchards are earlier in maturing than the Stockton, Linden and Lodi areas, which have traditionally been the heart of San Joaquin County’s cherry crop.

After those areas are finished, the West Coast harvest moves to eastern Washington, which is the largest producer of cherries in the nation. About 60% of U.S. cherry production is sold in domestically and 40% exported.

Tracyites looking to pick their own cherries will find that the Brentwood area has a number of U-pick orchards. And the quality of this year’s cherries makes them well worth picking.