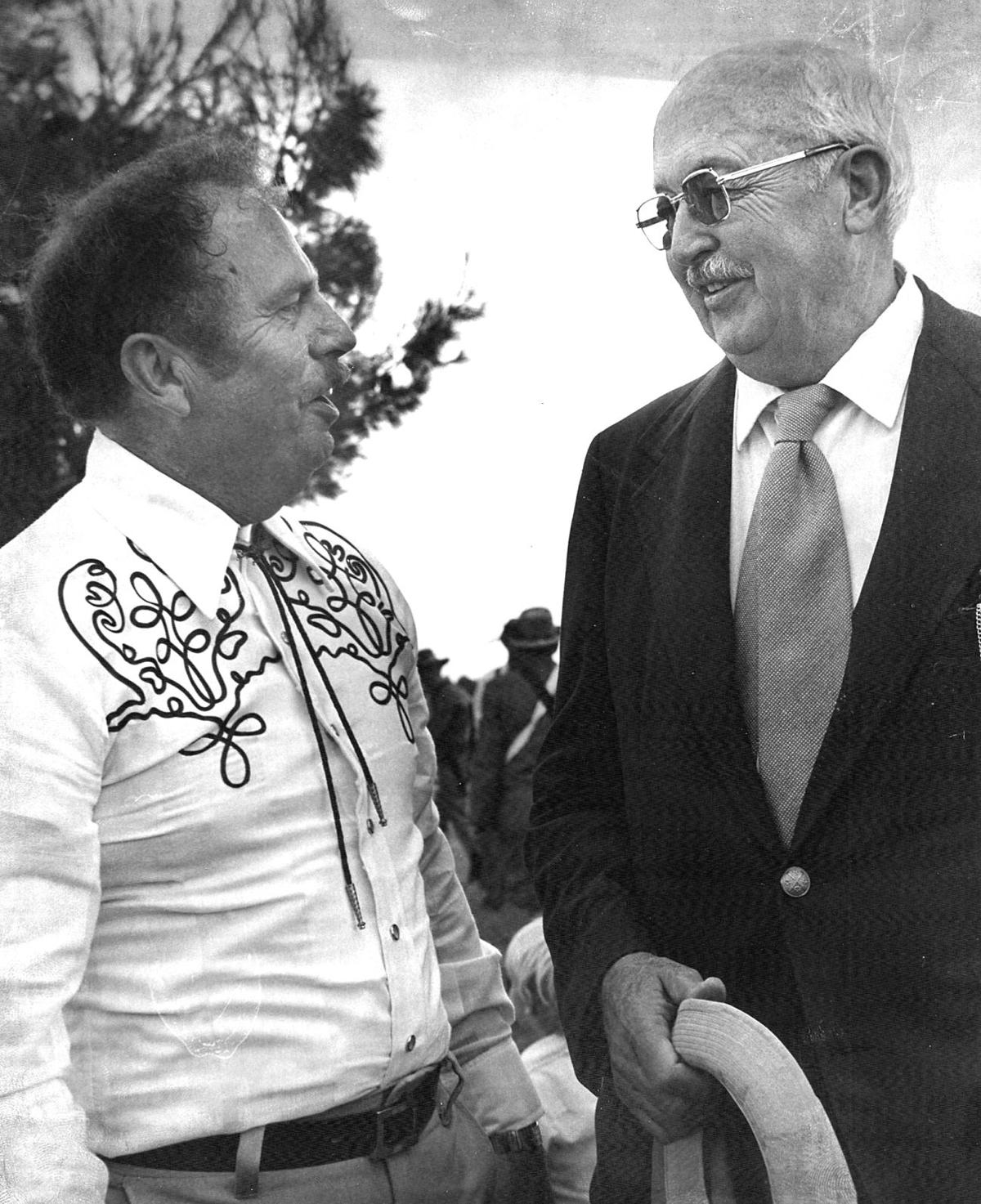 Rufus Tracy II (right), grandson of Lathrop Josiah Tracy, met with Tracy Mayor Aymon Hall on Sept. 10, 1978, during the Tracy Centennial Celebration. Sixty years earlier, in April 1918, his father, Rufus A. Tracy, came here as the first member of the family to visit the town named 1878 for the Ohio grain merchant. 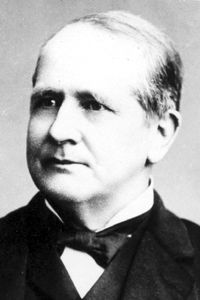 Mr. Tracy finally came to Tracy a little over 100 years ago.

No, it wasn’t Lathrop Josiah Tracy, the man for whom Tracy is named. It was his son, Rufus A. Tracy, who came here in April 1918.

Rufus Tracy’s father, who died Sept. 24, 1897, never did make it from his home in Mansfield, Ohio, to the town in far-off California that bears his family’s name — but his son did on April 22, 1918, and Tracy (the town) gave Tracy (the namesake visitor) a warm welcome.

The visit was the result of a letter sent to the family of Rufus Tracy three months earlier by A.R. “Ray” Arnold, manager of the West Side Bank of Tracy. He had researched the origin of the town’s name and, after receiving a tip from some local old-timers, found that Rufus Tracy’s father, Lathrop J. Tracy, had been a member of a well-established family in Mansfield. Arnold wrote the family, inviting them to visit here.

While on a motor trip to California, Rufus Tracy decided to take Arnold up on his offer. He and members of his family, including a sister and brother-in-law, a daughter, and a niece and friend, came by car from Berkeley, notifying Arnold only a few days earlier of their impending visit.

Before the Tracy family’s arrival, Arnold had quickly rounded up some 30 business, professional and civic leaders to welcome the party at the grill. Bradford Crittenden, a Tracy attorney who later became a state senator, served as master of ceremonies.

After enjoying what was described in newspaper accounts as “a good meal,”

Rufus Tracy gave a short biographical sketch of his father, whom he described as not only a grain merchant, banker and president of the YMCA in Mansfield but also an early supporter of railroads. It was as a director of the Sandusky, Mansfield & Newark Railroad that Lathrop J. Tracy became acquainted with J.H. Stewart, a superintendent of the line.

After moving to California, Stewart was in charge of constructing the Central Pacific’s San Pablo and Tulare rail line, which ran 47 miles from Port Costa in Contra County to a point 3 miles east of the coaling station called Ellis, established in 1869 when the Central Pacific tracks had been laid across the Altamont Hills. Where the two rail lines met in 1878, a new town was created. Stewart, as construction superintendent, was charged with naming new stations and decided to name it after the family of the man he admired back in Ohio, Lathrop Josiah Tracy.

At the 1918 luncheon, Rufus Tracy also gave Tracy Mayor Nelson Dwelly two photographs of his father — one is of which is displayed in Tracy City Hall. After the luncheon, the visitors were given a tour of Tracy and surrounding areas, including the newly opened sugar mill and irrigated farmland.

Rufus Tracy, a senior partner in a Mansfield insurance company, returned to the growing California railroad town bearing the family name during a trip to California in 1929, this time bringing his wife along with other relatives.

He died June 29, 1953, in Mansfield, but his son Rufus Tracy II came here in 1978 from his home in Woodside to take part in the Tracy Centennial Celebration. He rode in the back seat of a convertible in the 11th Street parade along with Tracy Mayor Aymon Hall.

After the parade, Rufus Tracy II received a Tracy Centennial Proclamation from Hall during a brief ceremony in Dr. Powers Park.

Tracy historian Alan Hawkins, who had made contact with the Tracy family, and I had a chance to meet Rufus Tracy II during the celebration, and he told us how delighted he was to establish a connection with the town named for his family.

“Mr. Stewart was quite an admirer of my grandfather and honored him by naming a station after him,” he said. “That’s why I’m here 100 years later.”

He gave me documents tracing the Tracy family’s roots to Gloucestershire, England, and related to their many business and civic activities in Mansfield.

Rufus Tracy II, who had moved to California in 1945, lived a number of years in Woodside and, after retiring as a property investor and developer, moved to Carmel Valley. He died Feb. 1, 1995, at the age of 91. Several of his offspring continue living in the Bay Area.

So what about Lathrop J. Tracy’s first name — was it the source of the name of what is now the city of Lathrop? For a number of years, that was the belief, but further research made it evident that it was not the case.

For one thing, Lathrop was established in 1869, nine years before Tracy. And to cap it off, Leland Stanford, president of the Central Pacific (later Southern Pacific), had a major dispute in the 1860s with Stockton officials, who rejected his proposal to build a railroad line on El Dorado Street to connect trains from a rail yard in south Stockton to riverboats.

Never one to take things lying down, the railroad tycoon (and later governor, senator and university founder) pulled up stakes and built the rail yard 12 miles south of Stockton at the junction of two Central Pacific rail lines.

Lathrop was named for the family of Stanford’s wife, Jane Lathrop Stanford. Her brother Charles was a construction engineer working for the Central Pacific then, and his presence no doubt added weight to the Lathrop naming.

In its early years, Lathrop was a bustling rail center with a rail yard, roundhouse and shops — until 1894, when those Southern Pacific facilities were moved to Tracy. Now, 124 years later, it’s bustling again — and so is the only town named for Lathrop Josiah Tracy.

Sam Matthews, Tracy Press publisher emeritus, can be reached at 830-4234 or by email a shm@tracypress.com.