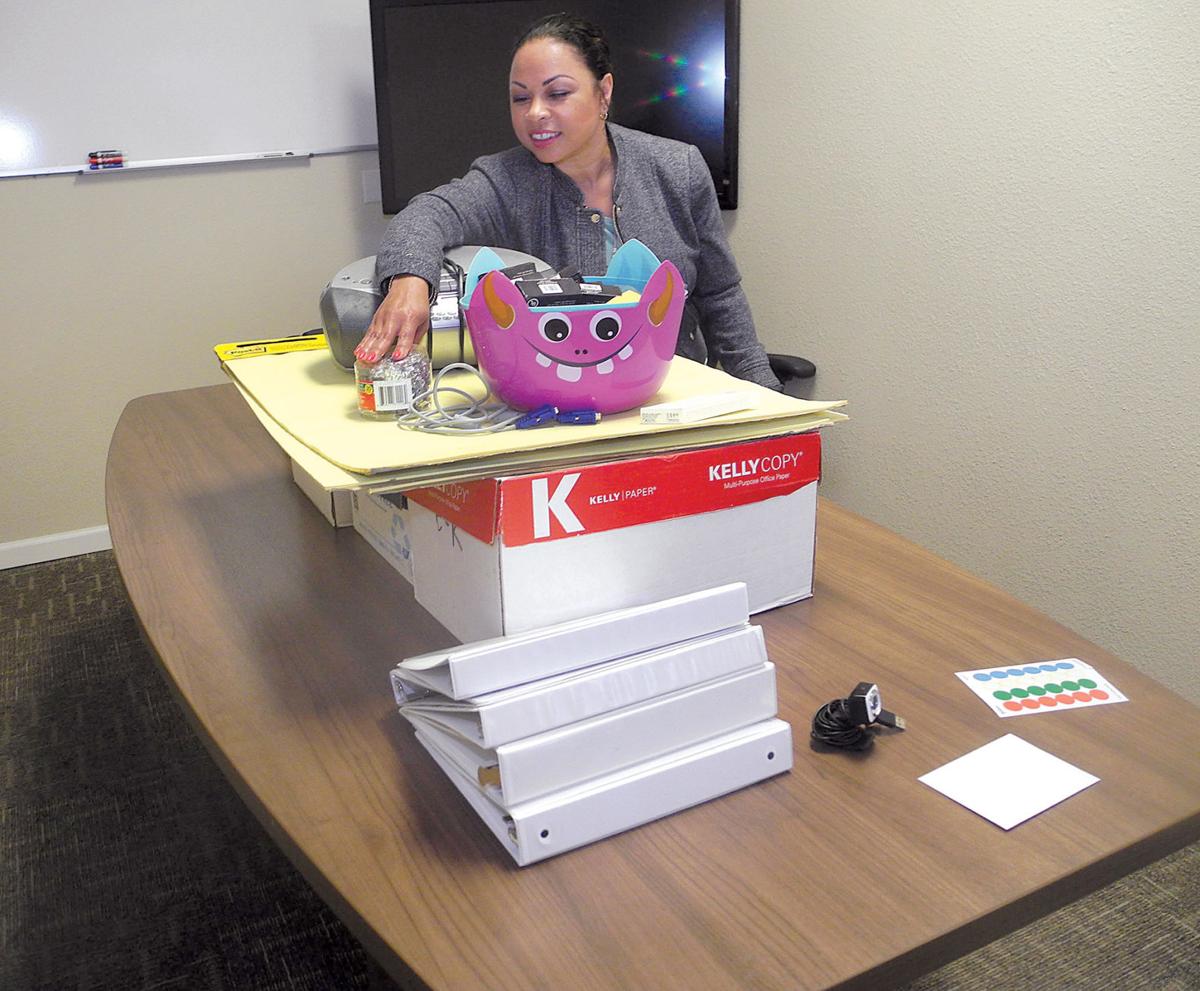 Cerena Sweetland-Gil finishes packing items from one of the classrooms in the Notre Dame De Namur center in the Opera House building on Central Avenue. She cleared out the ground-floor office-classroom area Thursday. 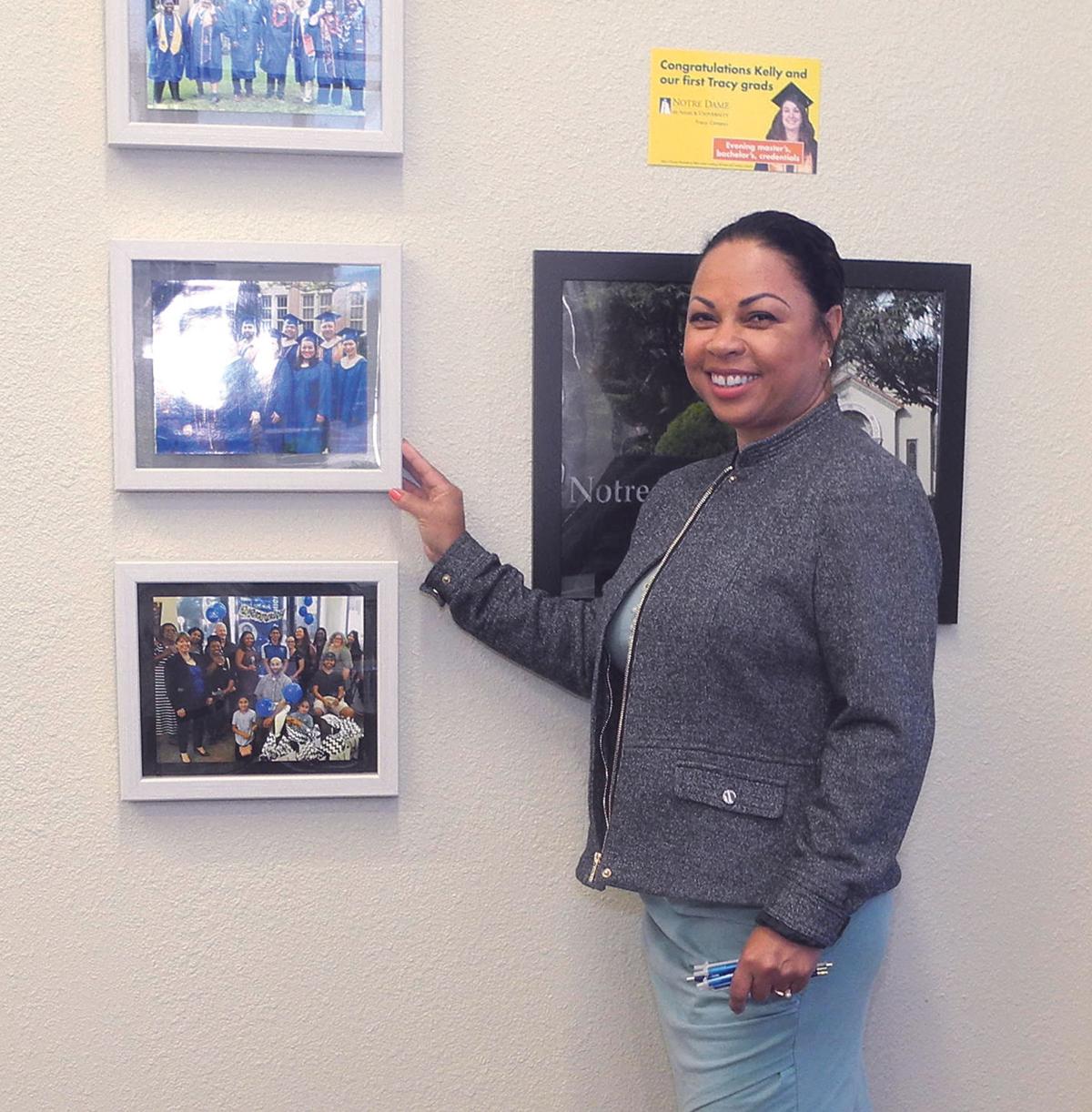 Cerena Sweetland-Gil stands next to photos of students at the Notre Dame De Namur Tracy satellite campus who have received degrees in the past several years.

Cerena Sweetland-Gil finishes packing items from one of the classrooms in the Notre Dame De Namur center in the Opera House building on Central Avenue. She cleared out the ground-floor office-classroom area Thursday.

Cerena Sweetland-Gil stands next to photos of students at the Notre Dame De Namur Tracy satellite campus who have received degrees in the past several years.

Notre Dame De Namur University on Thursday closed its Tracy center in the Opera House building, but the person who staffed the office-classroom complex for five years believes Tracy still has the potential of again becoming a home of higher education.

“Tracy’s ripe and crying for higher education,” said Cerena Sweetland-Gil as she paused a few minutes while packing the last boxes in the office. “It has the leadership; it has the community support; it has the demographics; it has the desire to be more — and that happens through education.”

Cerena, a Mountain House resident, started her tenure as the part-time, one-person office manager, student recruiter and ambassador for the Tracy satellite facility of the Belmont-based university in June 2015, two months before the first local classes were launched. Two years later, she became a full-time employee.

In the past year, as the Catholic university’s staff and board members grappled with the prospects of dramatically changing its structure or closing all together, she knew the Tracy campus was in danger of being closed.

And that decision was made several weeks ago, when she was told by Notre Dame de Namur officials that the Tracy office would be closing Thursday to take effect as of today, May 1. Any classes in which Tracy students are enrolled will continue with online instruction, enabling students with sufficient credits to work toward a degree either this May or in May of 2021. All contact with university instructors, counselors and administrators will be through the main campus in Belmont.

Students in Tracy classes are continuing their studies online after the dissolution of the Tracy campus.

“We started classes in August 2015 with six students — three in MBA (Master of Business Administration) and three in the business administration bachelor’s program,” Cerena said. “And by the fall of 2017, we had more than 60 registered students. We felt very good.”

She said that successful start of the Tracy program could not have happened without the support of the city of Tracy, the Tracy Consortium for Higher Education and scholarship contributions from generous donors.

City backing for the Tracy campus was spelled out in a memorandum of understanding approved by the City Council. It included early use of the transit station, city backing in marketing efforts especially through social media websites, and use of the Grand Theatre for three student musical productions.

The Tracy Consortium for Higher Education has been instrumental in working as a community liaison group, including the raising of $125,000 in donated scholarship funds for students enrolled in Tracy classes. About $5,000 remains to be awarded.

“I know Roger Birdsall, president of the consortium, worked very hard to make this happen, since a Notre Dame Tracy program was so close to his heart,” Cerena said. “And Steve Nicolaou moved from the consortium to the Notre Dame board. City of Tracy staff members Barbara Harb and Vanessa Carrera were great.”

The closure of the Tracy satellite campus is closely tied to the problems with finances and declining enrollment experienced at the Belmont campus, Cerena noted.

“It takes quite a few years to establish a satellite campus with robust enrollment,” she aid. “Notre Dame just ran out of time to accomplish that.”

From a peak of 63 students in the fall semester of 2018, Tracy enrollment has slumped to 44 students, she reported, mirroring the same kind of decline at Notre Dame’s main campus in Belmont on the San Francisco Peninsula.

Cerena added that the red-hot economy before the outset of the coronavirus pandemic at the beginning of this year had moved many potential students away from college classrooms toward jobs. And the pandemic has added to the challenges. But still, Tracy students are continuing to work online toward degrees.

“We will have graduated 50 students by this May with another 10 in the pipeline leading to graduating in May 2021,” Cerena said.

Have the students who have enrolled in the two academic areas — business and education — been generally pleased with the level of instruction? I asked her.

“Oh, absolutely,” she replied. “The quality of faculty, small face-to-face classes, the ease of starting in a class, the support the students receive from classmates and the convenience of being 10 minutes from home — it all has helped.”

She said she was surprised by the quality of the students in Notre Dame’s Tracy classes and their dedication as adult learners with families. And she appreciated the fact that the students reflected the diversity of Tracy’s population.

And while that program has ended and the university teeters on edge of possibly closing its doors in Belmont, too, there still remains a ray of hope that something might change in the coming months to make a difference in Notre Dame de Namur’s future, Cerena said.

“It would really take a special kind of magic in terms of a major donor who would become involved financially to help turn it around,” she said. “And, of course, there is always the possibility that another university would be interested in some kind of arrangement. I think having a satellite campus would be an asset to anybody who is looking at the Belmont campus with its location on the mid-San Francisco Peninsula and Silicon Valley firms all around it.”

Cerena said her experience over the past five years in Tracy has been, with very few exceptions, a positive one.

With a bachelor’s degree in economics and political science from the University of San Francisco and a master’s degree in international development from the Monterey Institute of International Studies, she has academic credentials that, when coupled with her experiences with several university outreach programs, including Notre Dame de Namur, have created any number of new job possibilities.

And she will carry with her memories of the ups and downs of five years with Notre Dame de Namur in Tracy, adding:

“We have a collective disappointment in closing Tracy because we all worked so hard to succeed.”