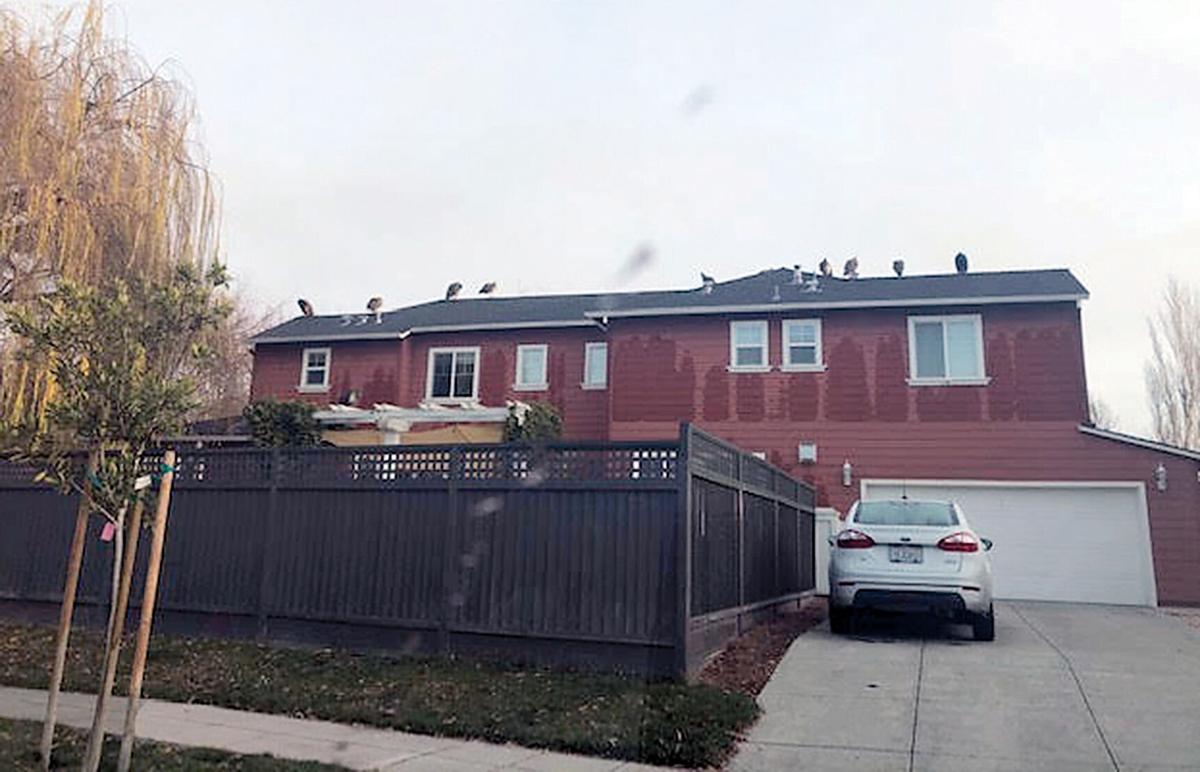 Peafowl perch themselves on the roof of a home in the Redbridge community on the west side of Tracy. 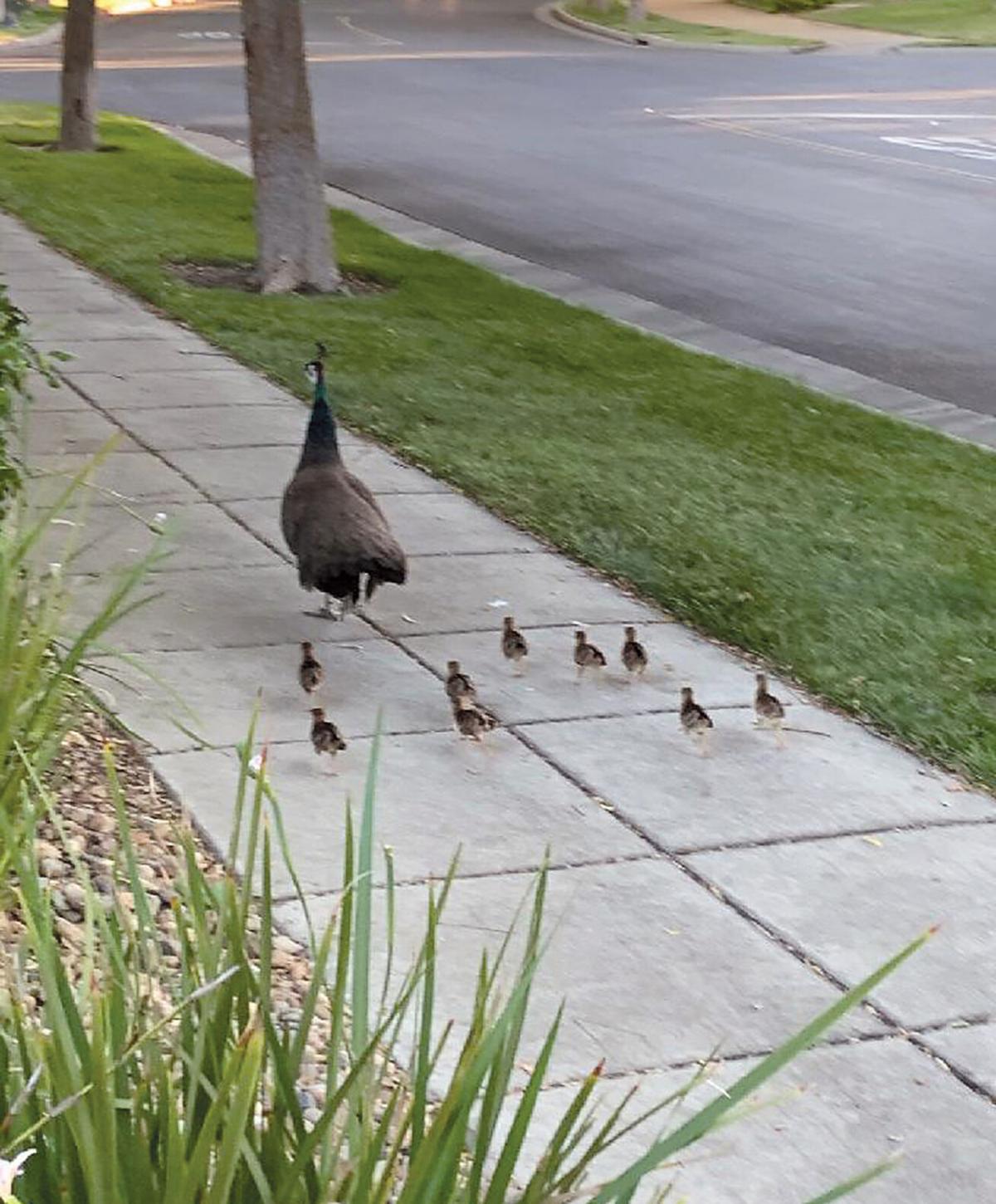 A mother peahen leads her chicks down a sidewalk in a neighborhood on the west side of Tracy. 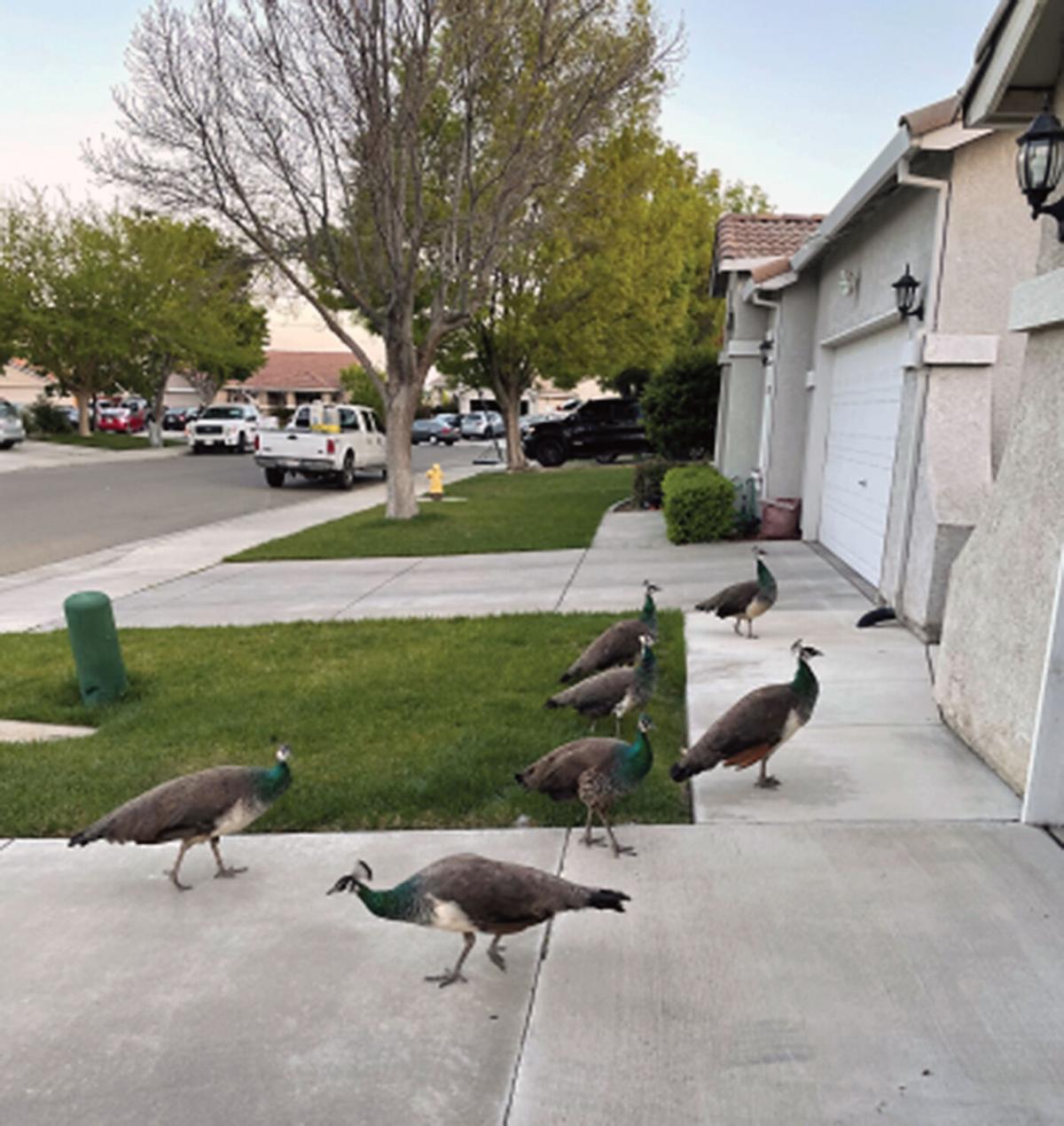 Peafowl loiter in front of a home near George Kelly Elementary School on the west side of Tracy.

Peafowl perch themselves on the roof of a home in the Redbridge community on the west side of Tracy.

A mother peahen leads her chicks down a sidewalk in a neighborhood on the west side of Tracy.

Peafowl loiter in front of a home near George Kelly Elementary School on the west side of Tracy.

The west side of Tracy has faced an uptick in nuisance complaints due to a surge in the number of peafowl that have been residing in and around the Redbridge community.

According to residents, what once started out a decade ago as a couple of peacocks and hens innocently roaming around the area has now turned into flocks invading neighborhoods, damaging properties, being aggressive toward pets and children, leaving feces and producing loud squawks during all hours of the day. Now, at least 30 to 50 peafowl are estimated to be loitering the area and have expanded their migration to neighborhoods outside of the Redbridge community.

“Well, it seems to have really gotten crazy in the past couple of years. And I think it's because now the numbers are exponential. It started with a couple. And then pretty soon it was 10. And then pretty soon it was 30. And then this past season that's amplified to 50,” said Dave Lieberman, board member of the Redbridge Homeowners Association. “And, you know, they're very beautiful creatures. Your instinct is to want to admire them. But unfortunately, when it gets to the point of these critters walking on roofs and damaging vehicles and solar panels and so on, it's time to step up and take some sort of action.”

On Tuesday, Tracy City Council voted unanimously to work collectively with the Redbridge HOA, which has agreed to split costs for relocation of the peafowl, which are considered top be domesticated livestock. Up until this point, mitigation strategies included education outreach through Tracy Animal Services to the public that encourages residents not to feed peafowl they’ve come across, as these birds tend to flock toward where food is a sustainable source according to Animal Services Supervisor Brittany Pasquale.

“So during the warmer months, in general, Animal Services receives increased complaints in regards to the peafowl, which are known as peacocks in the resident areas of Redbridge and then kind of the surrounding community, which includes George Kelly Elementary School,” said Pasquale. “The peafowl are causing damage to private property, which is causing concern in the community. Due to the number of the complaints that we had been receiving, especially this year during this summertime, we did have our neighborhood resource officers meet with the Redbridge HOA, and we discussed different options.”

Interim City Manager Bob Adams clarified to council that the problem is not just centered around the private Redbridge area but that the city was looking to work toward a solution that would mitigate the problem for both the private and public sides.

“They're coming over both ways. So, in order to address that situation, for the residents of the city that are on the city side, we have to solve the problem on both sides at the same time. Otherwise, if only one side took care of it, then they would come over from the other side and vice versa,” said Adams. “So the idea was to share the cost with the Redbridge Homeowners Association for their part of the problem and then match it with the city's part of the problem, so that we get some assistance in getting that taken care of.”

Boys and Girls Club of Tracy Executive Director Kelly Wilson, who resides in a public neighborhood adjacent to Redbridge said that the slew of peafowl have started to create quality of life issues. She has counted groups of 20 birds at a time and has had aggressive peacocks perched on her front porch when she tries to exit her home, some of which have damaged her car.

“At first, I mean, it was extremely startling. They are aggressive. We've done all of the deterrent methods from the hose -- I mean, literally, you hear them up there, you run outside to get your hose and you spray them off the roof. You shoo them away from the front,” said Wilson. “They defecate everywhere. They defecate on our yard furniture, along the sidewalk on the driveway, everywhere. If you aren't living in that, it seems a little trivial. But believe me, it's not.”

Wilson and other members of the community spoke up and said that despite education efforts, members of the public are still feeding the birds, which is causing them to stay in the area.

Mayor Nancy Young also said that when she spoke to Tracy Unified School District’s Director of Student Services Rob Pecot, that he confirmed that the peafowl have been a problem for the students at George Kelly Elementary School for years, where in some instances the birds would chase students.

Animal Services surveyed 190 residents in the area, where about 58% said they preferred that the birds be removed from the area. Pasquale said relocation was the most humane solution for doing this and this is possible because peafowl are not protected under the Migratory Bird Act -- which prohibits the relocation of native birds -- due to them originally being brought overseas to the U.S. from eastern nations in the 1930s.

“We did reach out to a licensed wildlife trapper that did offer their services for relocating these peafowl and did find locations of where he can relocate them. He did visit the area and provided an estimate of between 30 and 50 peafowl. It is pretty difficult to know exactly how many just because of how they move through the different areas,” said Pasquale.

Rick Tolbert from Bay Area Wildlife Service specializes in humane nuisance wildlife control and operates his family-owned business in Tracy. According to Pasquale, he is the only expert in the area who is able to handle instances such as these.

Tolbert came to council to explain that he had reached out to local sanctuaries and Sikh temples to find new homes for the birds. So far, new homing options for the birds have been confirmed for three locations, including Sikh temples in Tracy and Manteca. Adams said he did intend to research more places where the peafowl could reside, preferably out of city and county limits.

Tolbert estimated that the cost to capture and relocate the peafowl would be $30,000 for up to 30 birds and would move up from there, based on the actual amount that would need to be relocated.

“I want to attempt to catch him with a net, wanting to buy a casting net, but they're illegal in California. So I have to use the hoop net. I think I can get close enough to them to catch them with the net and then put them in ... like a burlap sack and wrap them in vet tape and transport them,” said Tolbert.

Council brought up a few concerns during the discussion item, such as ongoing costs if peafowl were to return to the area.

“My concern is if education isn't working, how likely is it that we're going to continue to have this problem? Even if it's a year from now? Or two years from now?” said councilwoman Eleassia Davis. “That makes me think a little bit differently about how we address this, because it could re-occur, and it could start on the city side, and it can migrate over to the Redbridge side. And, you know, how invested are we going to be if this problem reoccurs?”

Pasquale said that details, such as having Tolbert return to the area within a six-month period to ensure that no stray peafowl were still in the vicinity, would be negotiated once staff were officially directed to start outlining contact details. Adams also said that the city would still need to locate a funding source for the project.

“Of course, they might come back. I think you have to look at this, like any kind of pest control, when you see it start you’ve got to nip it in the bud,” said Lieberman. “And I can tell you that the Redbridge HOA, if after these peacocks are removed, and we see another one, we'll spend whatever it takes to get that one out of there, so they don't meet and make more. I mean, that's what has to happen.”

City staff is expected to bring back details about how things will be moving forward by no earlier than next month.

“As long as we get everything completed, yes (in regard to details being brought back in December), which we should be able to,” said Adams. “But you never know. I've learned something new tonight. Maybe we'll learn something new as we go into this because we've not dealt with peacocks before.”