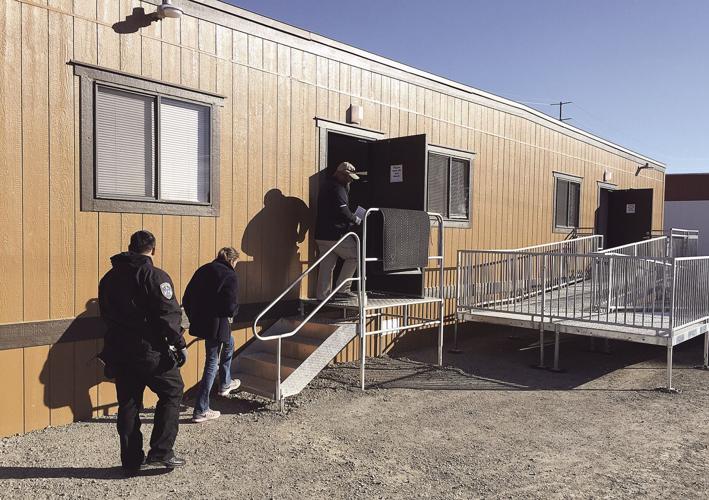 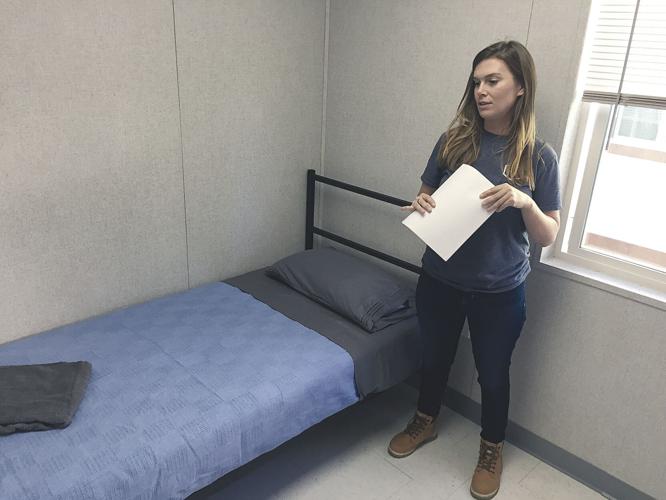 Emily Koval, Regional Program Manager with City Net, show off one of the rooms inside one of the modular buildings that make up the new shelter on Arbor Avenue. 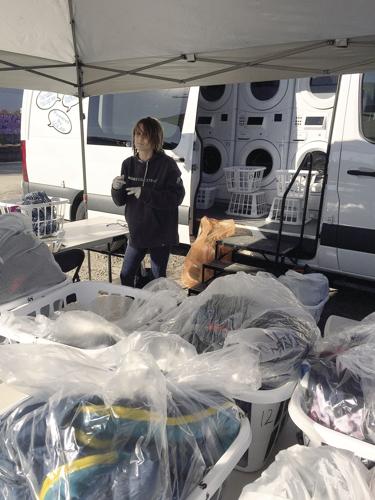 Nikki Vaughn prepares clothes for Uplift All Foundation solar-powered laundry van, which is set up at the city of Tracy’s homeless shelter on Arbor Ave. 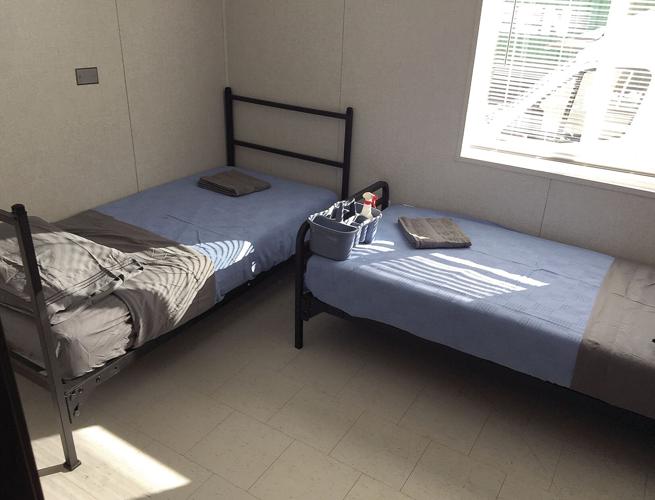 Rooms inside the modular buildings at the city’s new shelter on Arbor Avenue are single or double occupancy. 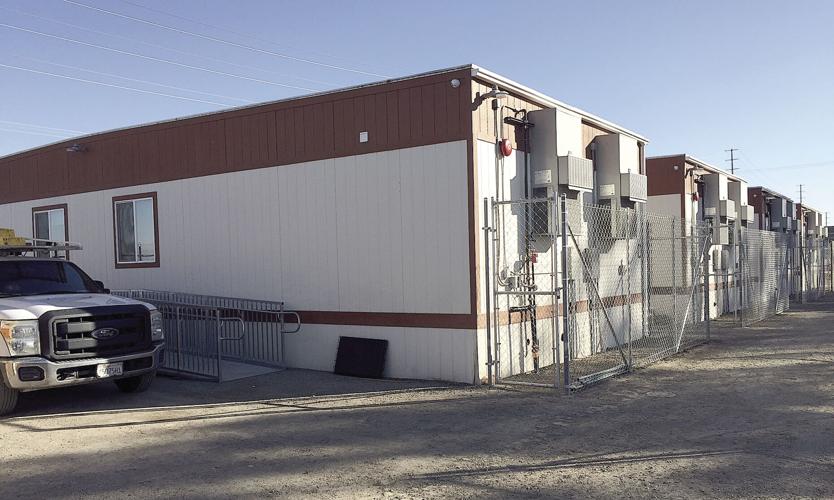 A row of four modular buildings make up the new homeless shelter on Arbor Avenue.

Emily Koval, Regional Program Manager with City Net, show off one of the rooms inside one of the modular buildings that make up the new shelter on Arbor Avenue.

Nikki Vaughn prepares clothes for Uplift All Foundation solar-powered laundry van, which is set up at the city of Tracy’s homeless shelter on Arbor Ave.

Rooms inside the modular buildings at the city’s new shelter on Arbor Avenue are single or double occupancy.

A row of four modular buildings make up the new homeless shelter on Arbor Avenue.

The city of Tracy started bringing people into its new homeless shelter this week during a low-key opening.

By Wednesday the row of modular buildings, set up as four small dormitories, had welcomed 14 residents and the city expects to have about 2 dozen folks housed in the facility by the end of the week.

City officials said they wanted to have a soft opening to see how the system for bringing in residents would work at the shelter, which offers more than just rooms and beds, but is also designed as a service center that can help the previously unsheltered homeless find their way back to sustainable housing and employment.

Tracy Assistant City Manager Midori Lichtwardt said that the interim shelter was originally expected to be the fourth phase of the shelter project on Arbor Avenue. Work is ongoing for the main project, the temporary emergency housing facility, which will be a 6,300-square-foot high-tension membrane Sprung structure.

When that project continued to run up against repeated delays the city opted to bring in five modular buildings and set them up as an interim shelter. The city will continue to add more buildings, including modified shipping containers, to the Arbor Avenue site, with the goal of moving unsheltered homeless people out of encampments in city parks and into a place where they can get the services they need.

Lichtwardt said that four modular buildings on-site now have enough space for 48 beds. A fifth building provides offices and a common area for residents. Eight more buildings, the modified shipping containers, are expected to arrive next month from Texas.

The main project with the Sprung structure is expected to house 68 people, and will include an administration building and a kitchen.

“That was all in the original plan. That’s the one where we will be bringing the bids to council in December,” Lichtwardt said.

In the meantime the city has established contracts with Tracy Community Connections Center and City Net of Southern California as service providers for the shelter, with City Net operating the interim shelter that opened this week. TCCC will operate the main shelter and service center when it opens next year, and in the meantime that group is directing people from encampments like El Pescadero Park toward the new shelter.

City Net was hired for its experience in operating shelters in Southern California. Emily Koval, regional program manager for City Net, explained the process of admitting new residents. It’s not a drop-in shelter, and people already working with TCCC can get a referral to move into the new shelter.

Once they take the shuttle trip from an encampment to the shelter they go through a registration process where the staff from Trine Integrated Services, Inc., the security company at the shelter, signs them in and makes sure that any kind of contraband goes into an “amnesty box.”

There is a check-in system as well, and a 9 p.m. to 6 a.m. curfew, with exceptions for people who are employed.

Koval said that their next stop is the community building where they fill out forms and questionnaires, with the intention of finding out what services people require, and learn about the rules for residents. Then they are assigned a room in a dormitory building, which have single- and double-occupancy rooms, showers and restrooms. A solar-powered laundry van from Uplift All Foundation is on-site as well.

The community building is also set up as a dining hall, with refrigerators, microwaves and coffee pots.

“Everyone will come here three times a day for breakfast, lunch and dinner,” Koval said. “Right now we are just ordering in, but we’re going to be partnering with some churches locally. We’re going to bring in donations. We have one church bringing mashed potatoes and broccoli today.”

Robert Rosiles arrived at the shelter on Tuesday and was one of the first people to move in. He said he had been homeless for the past 3 years, including 4½ months living in El Pescadero Park.

“Last night was the first night. I slept good. I haven’t been in a bed in 3 years, so having my own bed, having my own room that locks, it’s a good feeling. I’m blessed for the people that are here among us. I’m glad to see the money well-spent for the homeless.”

Rosiles said that Redemption Road Church on Grant Line Road has connected him with services since he’s been in Tracy and referred him to the new shelter.

“I go 6 days a week so I stay clean, stay sober, stay mindful and study,” he said. “I just kept true to the word. Every time I needed something or someone to talk to the Lord always provides.”

Koval said that her group has found that getting people in a shelter, away from the survival-mode existence of living on the street, is the first step toward finding the services they need to get their lives back on track.

“It’s healing that and grieving what their life was before, and then align that vision to what their life could be in the future,” she said. “We get to be that catalyst and it’s a really beautiful operation.”

She added that City Net is still building its team for the local operation, and job opportunities can be found at the city’s website, citynet.org.