Starting at
$52.00 for 365 days
Get Started
View all rates
You are the owner of this article.
Edit Article Add New Article
You have permission to edit this article.
Edit
Welcome, Guest
Celebrate Tracy
News
Voice
Our Town
Sports
Datebook
Obituaries
Advertising
Classifieds
Special Sections
1 of 15 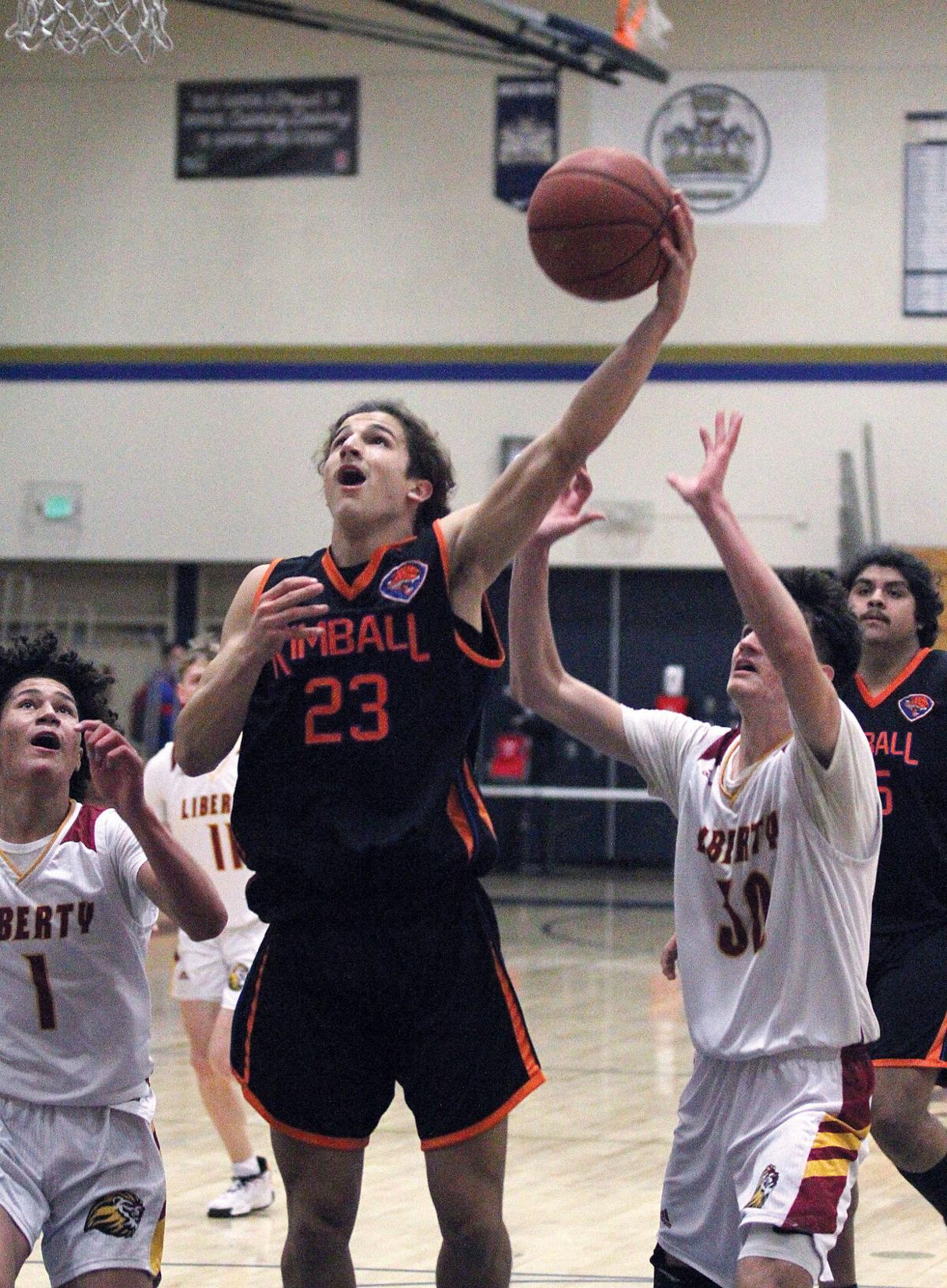 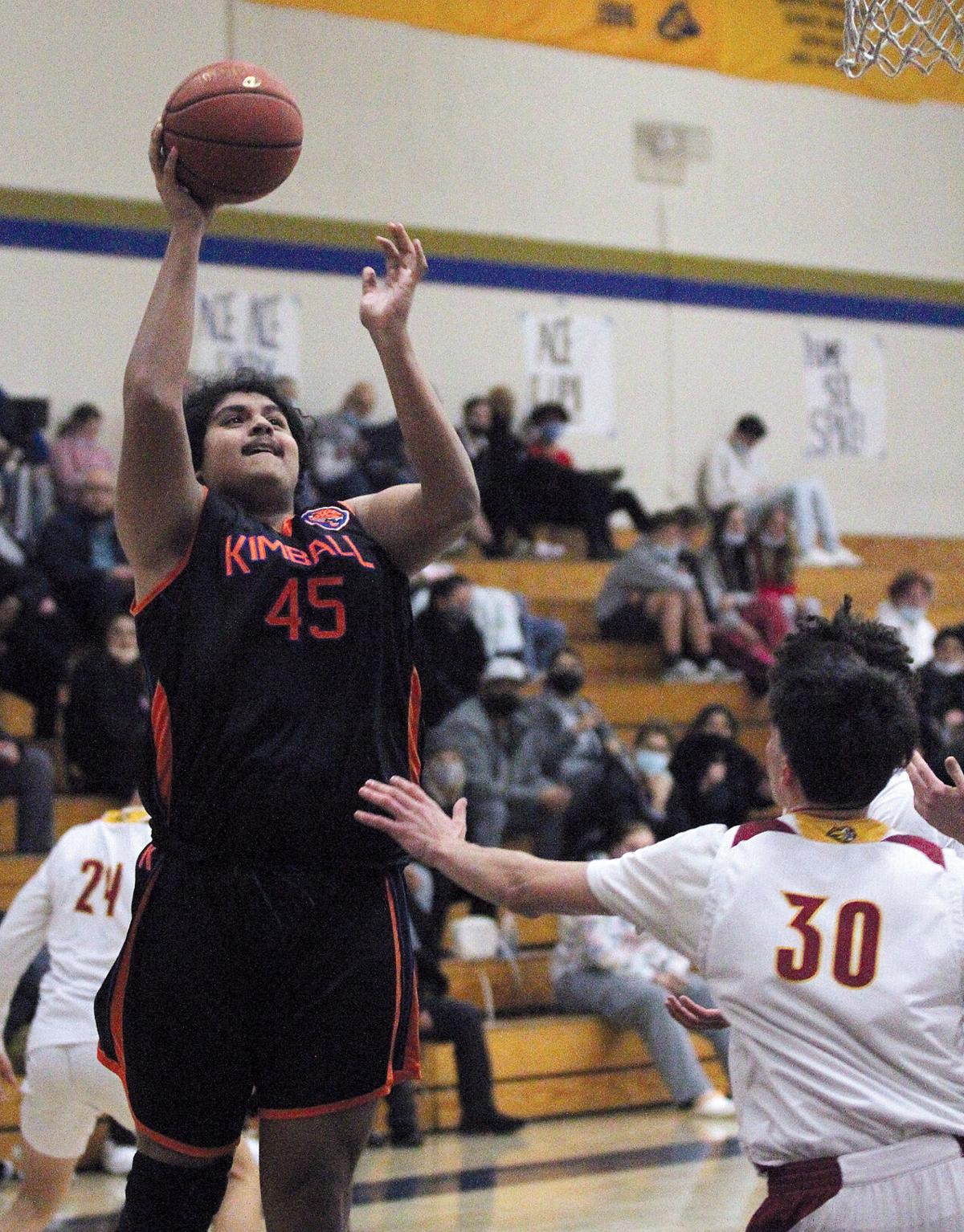 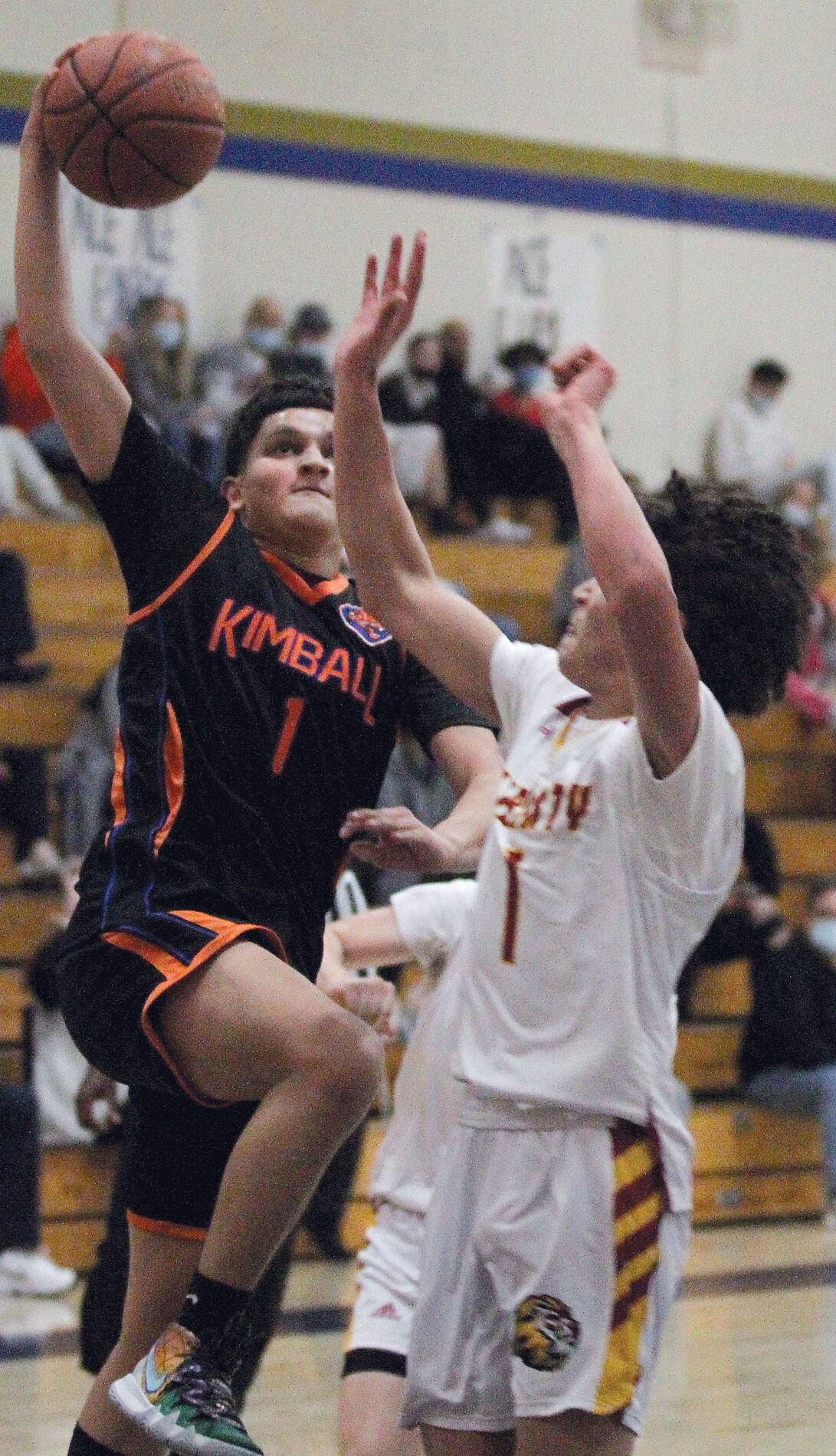 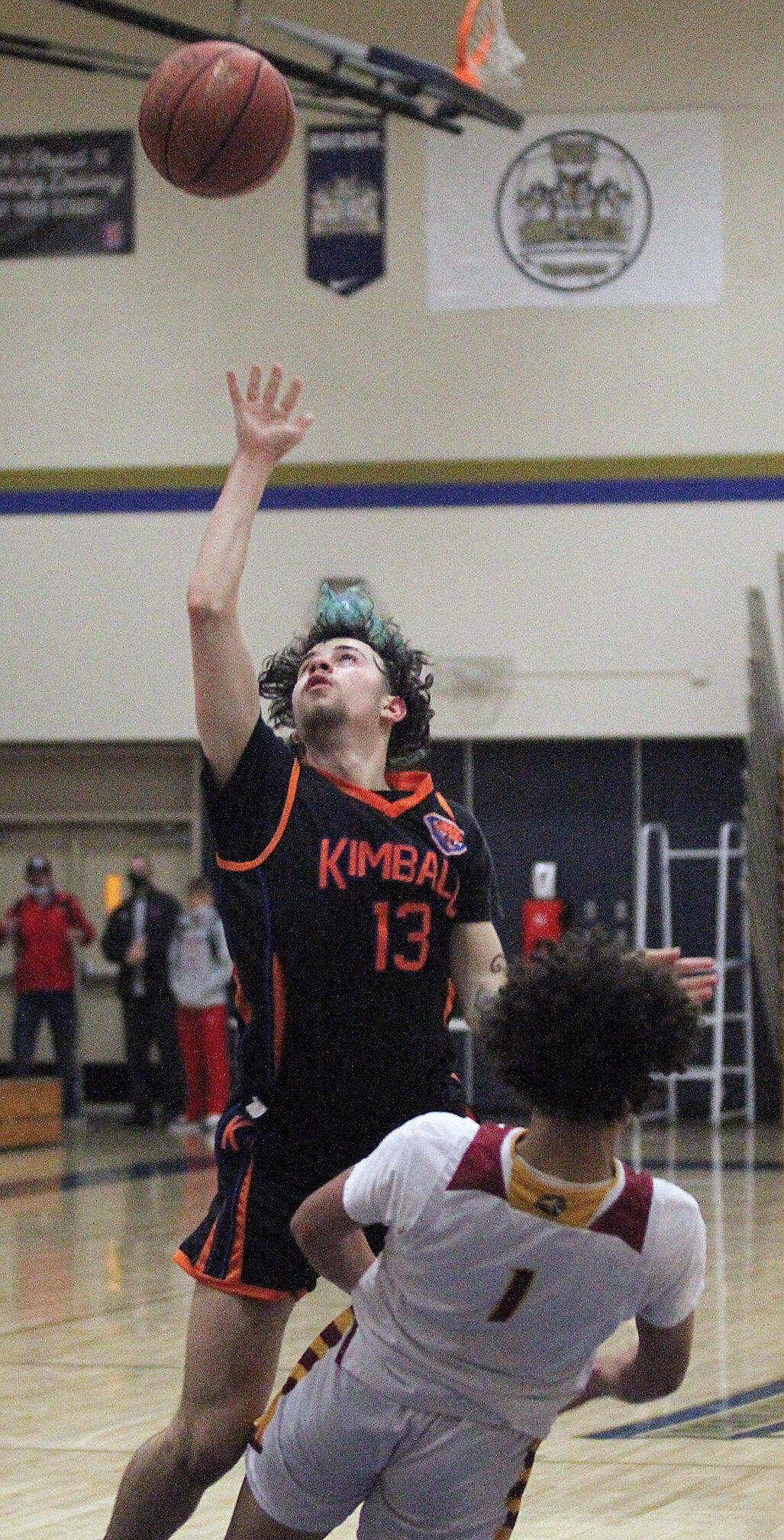 Kimball High senior Kobe Harris makes a contact going for a shot at the basket Friday evening at West High. 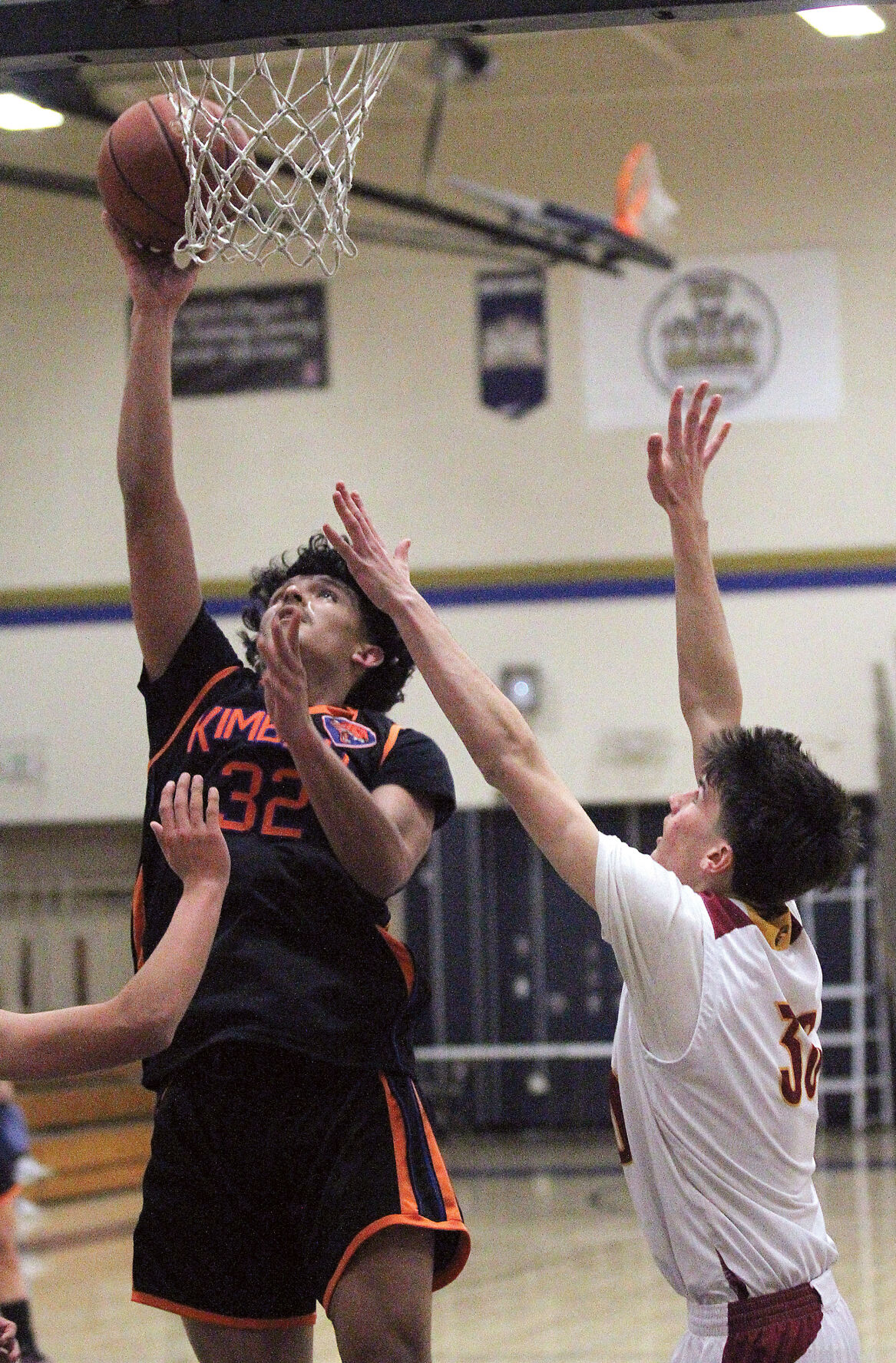 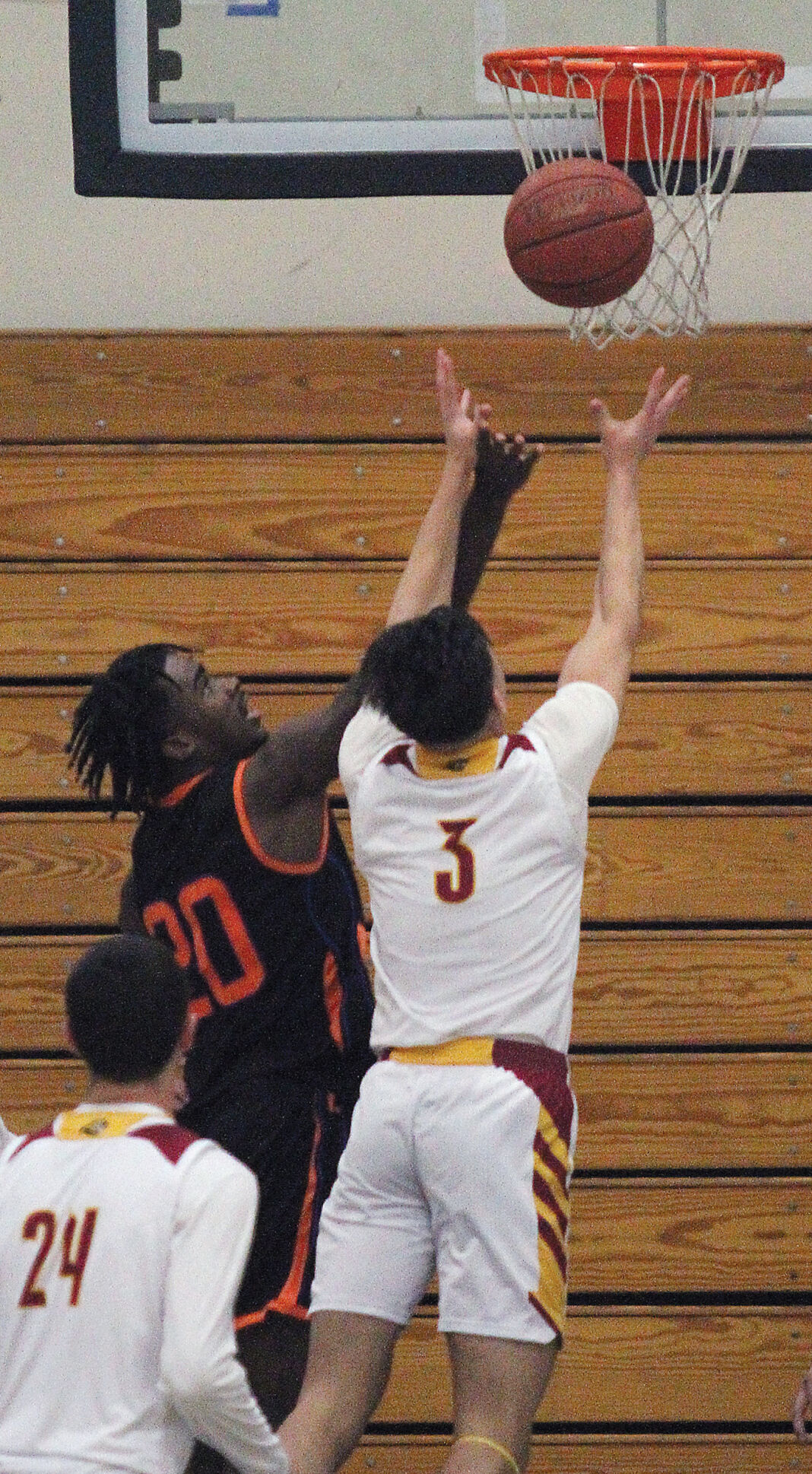 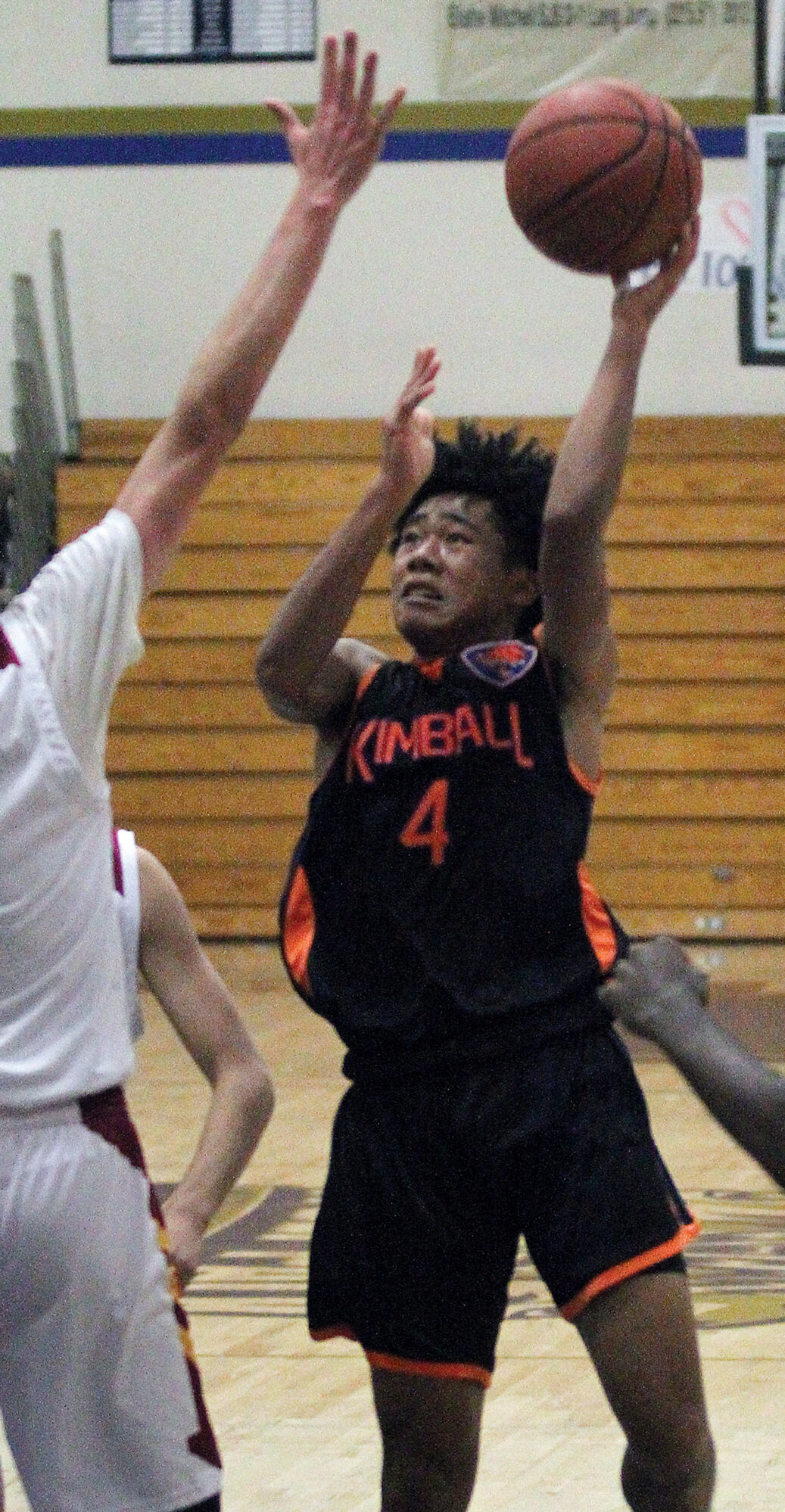 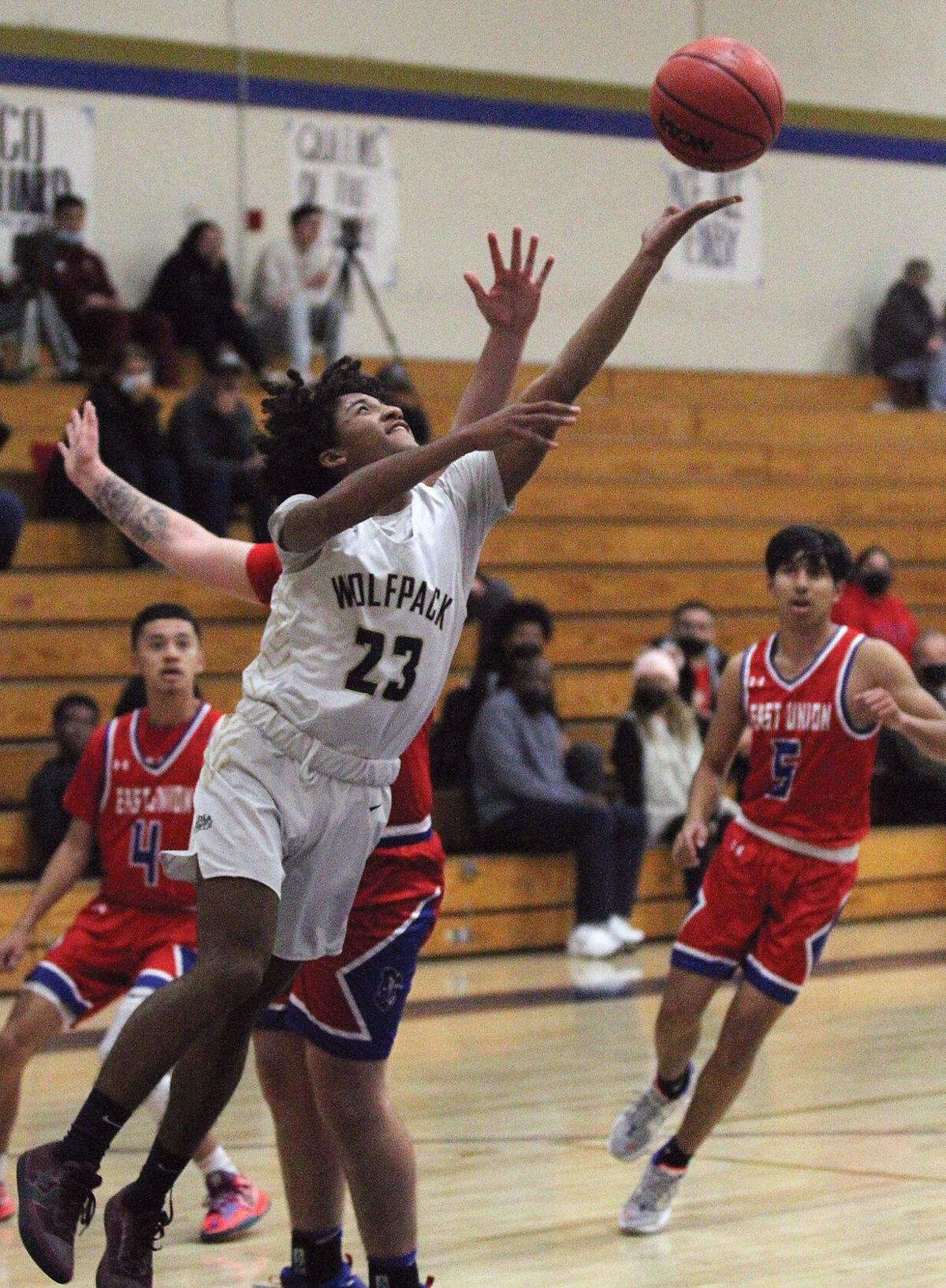 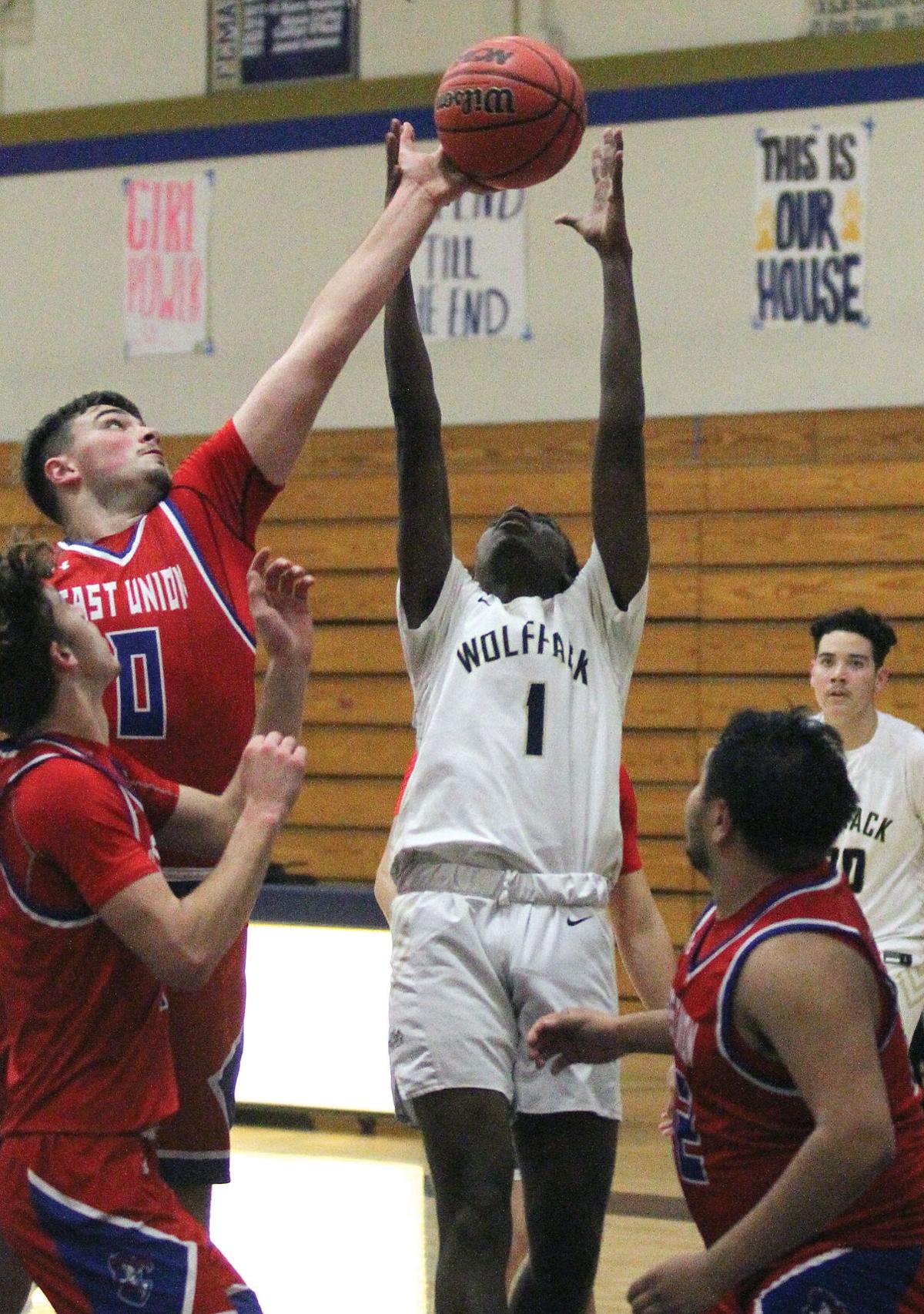 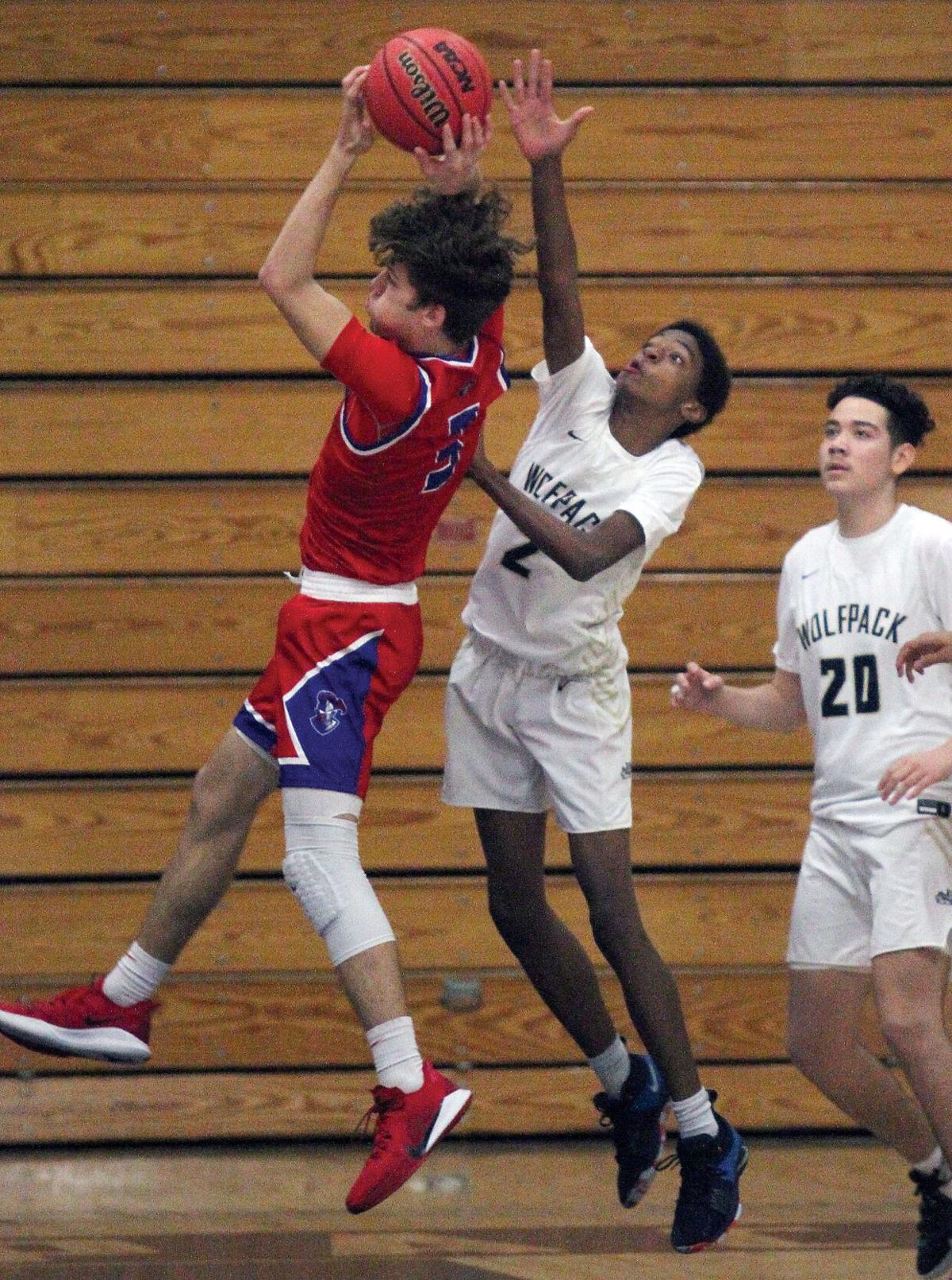 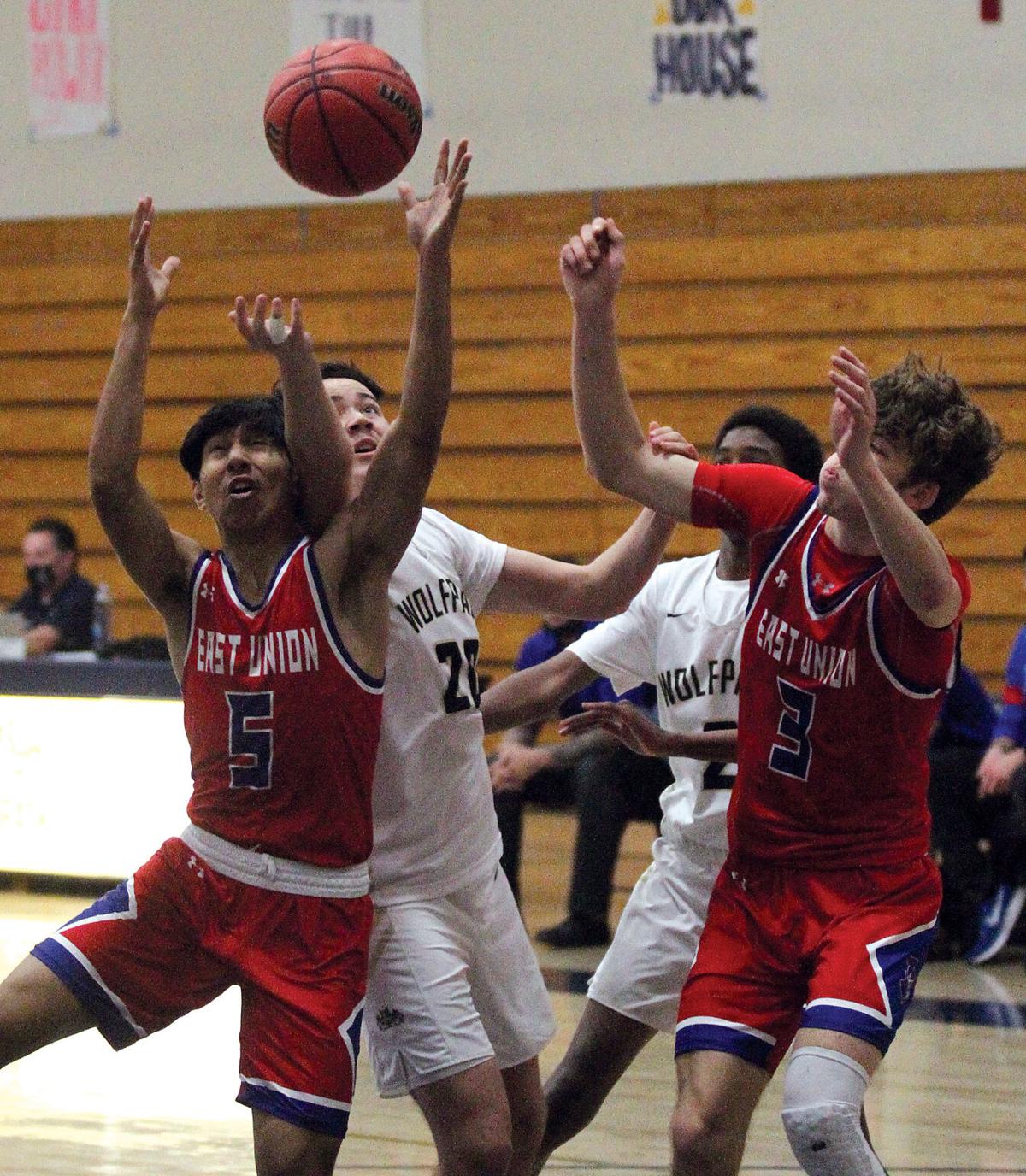 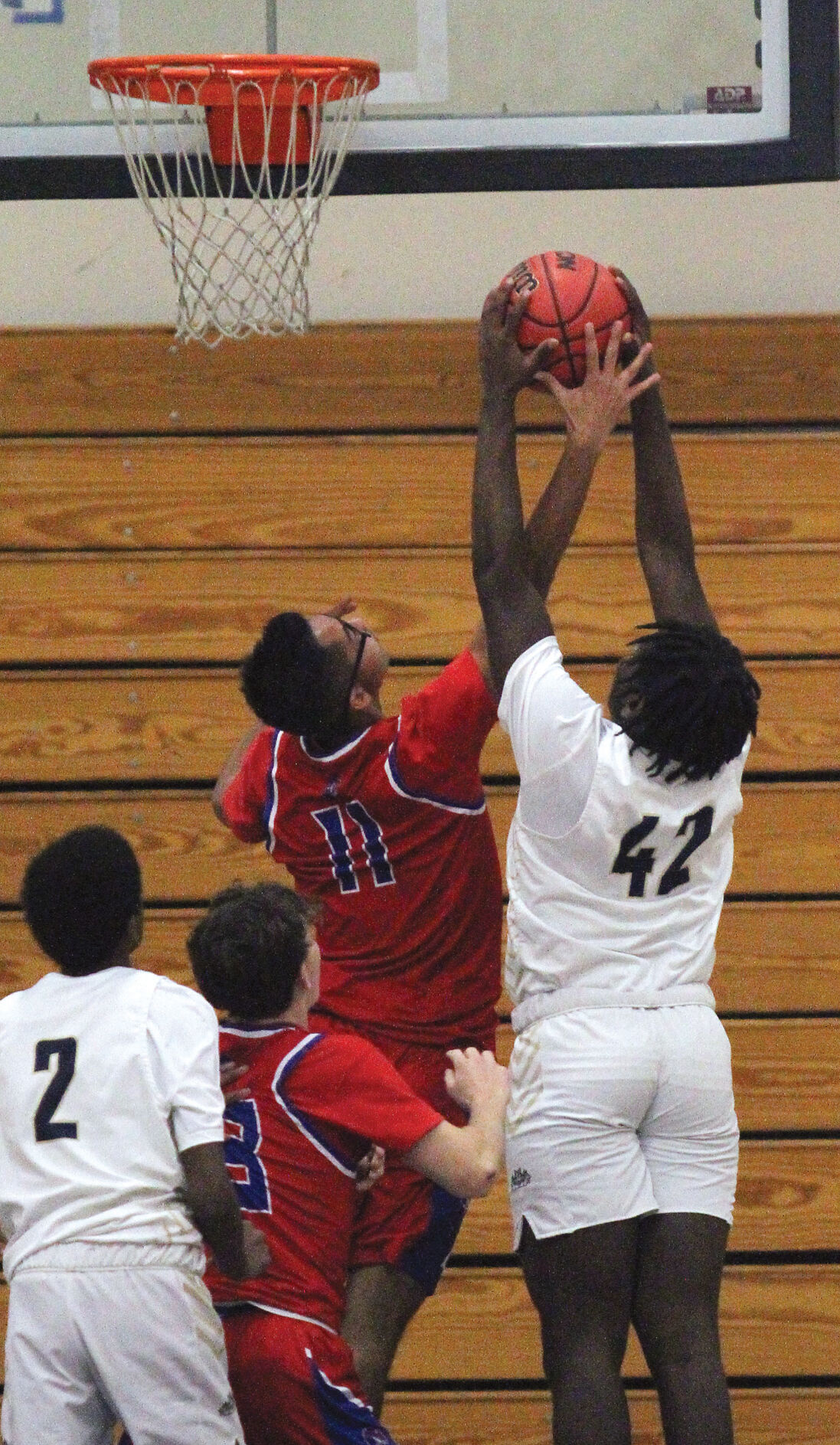 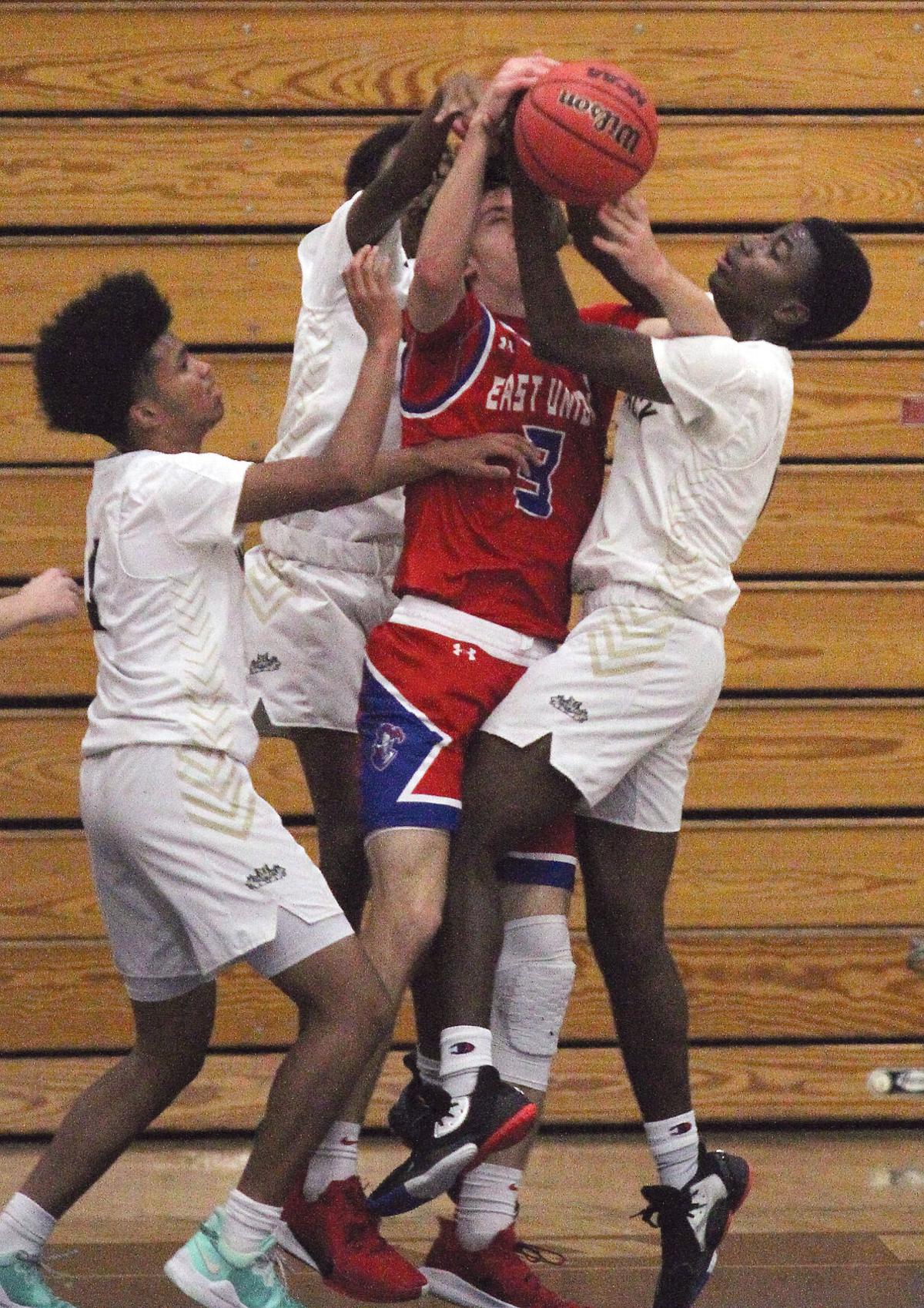 West High sophomores Joe Walker (from left) and Cam Williams along with senior Chris Brown try to strip the ball away from an East Union player Friday evening at West High. 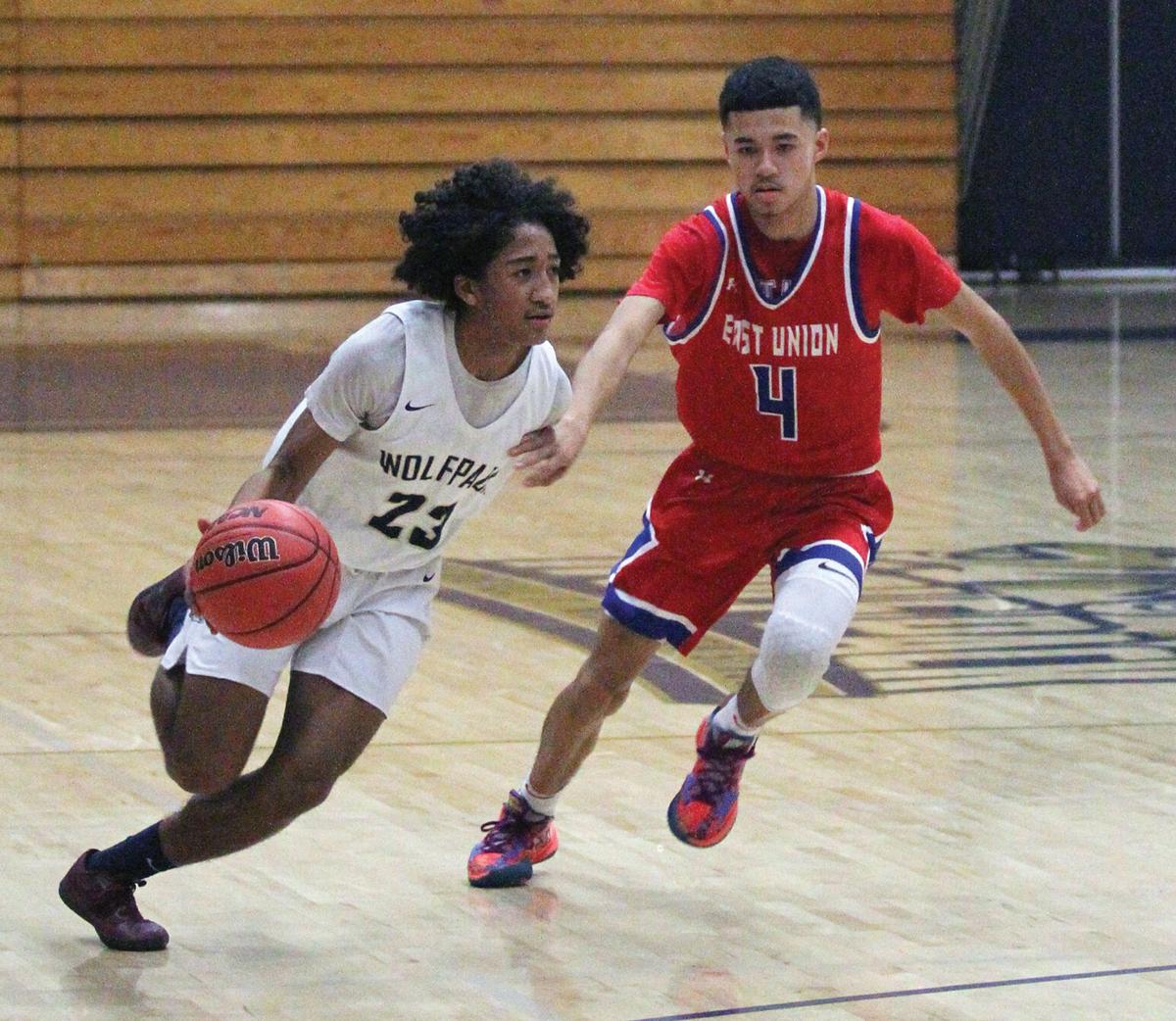 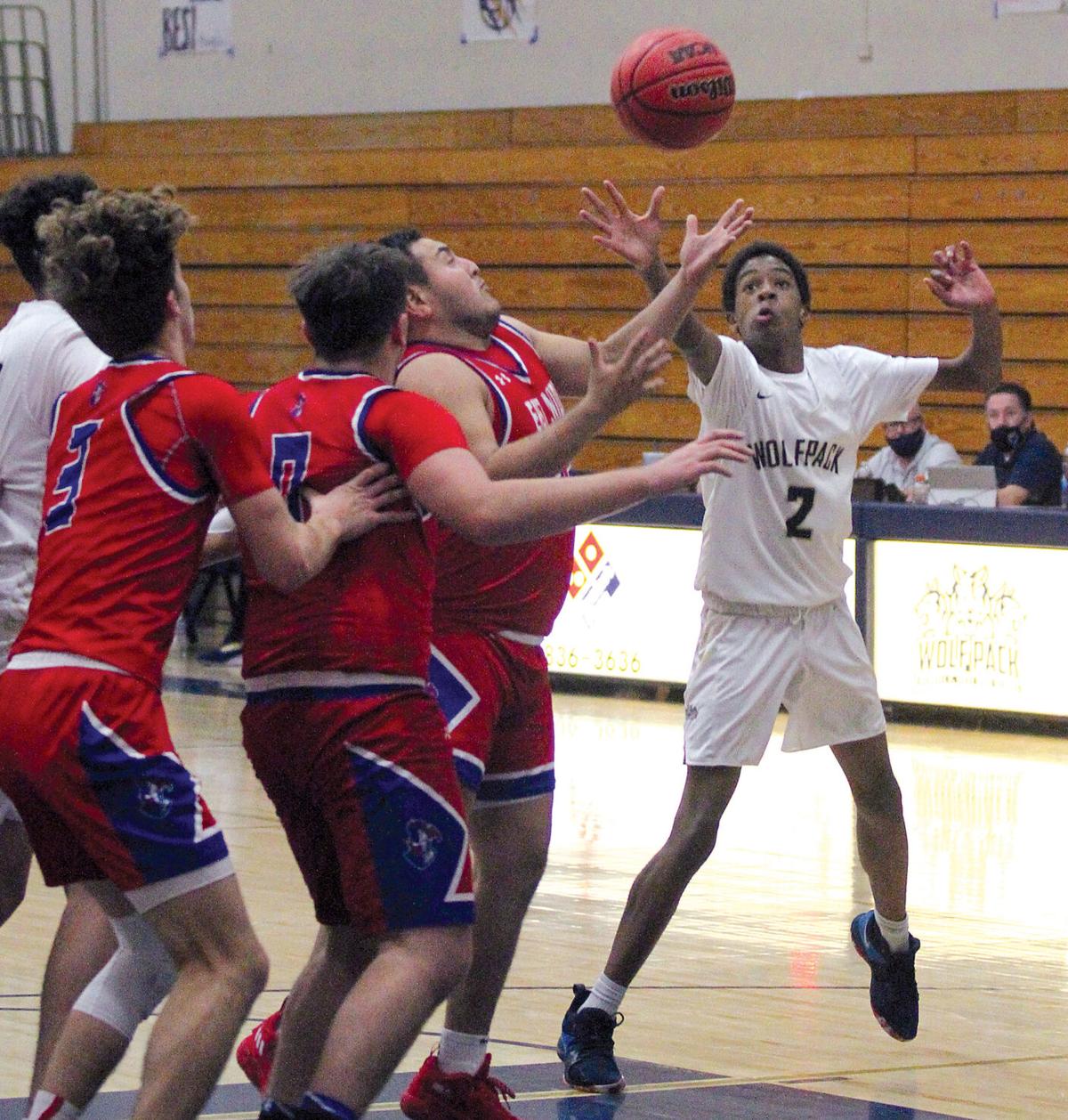 Kimball High senior Kobe Harris makes a contact going for a shot at the basket Friday evening at West High.

West High sophomores Joe Walker (from left) and Cam Williams along with senior Chris Brown try to strip the ball away from an East Union player Friday evening at West High.

Liberty High was the tournament champion with a 46-42 win over East Union High on Saturday afternoon.

The Kimball Jaguars jumped out to an early lead in the third-place game of the West Winter Classic on Saturday. In the second quarter the Jaguars all but shut down the Wolf Pack offense, giving Kimball a 37-11 lead at the half.

West started to hit more of its shots in the third quarter, including a couple 3-point shots for sophomore Joe Walker, but the Pack couldn’t slow down the Jaguars, who also dominated the boards and forced turnovers with their aggressive defense as Kimball took the 76-35 win.

Kimball coach Albert Garibaldi said it was a good finish for his team, which just missed a chance to make the final with Friday’s loss to Liberty High.

“I was hoping we would be able to win this tournament. We have enough talent to be able to do that,” he said. “Unfortunately we had a hiccup yesterday, but we had a good game today and I’m proud of the kids for coming out and playing well today in an early morning game.

The Mountain House Mustangs were outmatched by the height and aggressive defense of the Pitman Pride in Saturday’s consolation final of the West Winter Classic.

Pitman senior Robert Salmon scored 10 of his game-high 24 points in the first quarter as the Pride quickly took the lead. The Mustangs put up a more effective defense in the second quarter and senior Dexter Francis III led his team’s scoring, but the Pride still held a substantial lead, 25-12, at the half. The Pride continued to outscore the Mustangs in the second half to bring Pitman the 49-28 win.

Mountain House coach Reno Ursal said that a tough tournament is a good way to end the first part of the season as the Mustangs prepare for Western Athletic Conference play.

“We ended up 5-8 in the pre-season so we are, I think, prepared for league, because we didn’t have a cupcake schedule. The hope is over the long term that benefits the kids,” he said.

“Pitman had some good basketball IQ kids that our kids could learn from, so it makes us better.”

The Bear Creek Bruins took an early lead and continued to pull ahead in each quarter to take a 60-37 win over the Millennium Falcons on Saturday in their final game of the West Winter Classic.

The Falcons got scoring contributions from nearly everyone on the roster. Senior Omari Arauz-Doucet led the way with 10 points and junior Jordan Flores scored five points.

The Kimball Jaguars and Liberty Lions played a close contest all the way through until the Lions went on a quick scoring run at the end of the fourth quarter for the 59-50 win in the semifinals of the West Winter Classic.

The teams traded the lead four times in the first half. Liberty was able to pull ahead by seven points late in the second quarter, and the Lions held a 27-22 lead at the half.

The Jaguars were back in the lead in the third quarter, and the teams traded the lead five more times until they were tied 50-50 going into the into the final minutes, which is when Liberty took control on offense to pull ahead at the end.

East Union got out to a 16-6 lead in the first quarter before West could make its shots consistently in Friday’s semifinal game of the West Winter Classic. The Pack got within five points of the Lancers in the second quarter but it was as close West would get as East Union came back to dominate the second half for the 75-36 win.

The Mountain House Mustangs and Bear Creek Bruins started off with a close first quarter before the Mustangs, led by sophomore Thurmond Thorpe scoring 12 points in the second quarter, took over for a 34-23 lead at the half. The Mustangs extended their lead in the third quarter. The Bruins stepped up their offense in the fourth but could not close in as the Mustangs took the 64-56 win.

The Falcons could not hit their shots in the first quarter against Pitman High on Friday in the West Winter Class, but picked up their offense in the second quarter to make it a 31-16 game in Pitman’s favor at the half. Millennium hit a shooting slump again in the third quarter and though the recovered the Falcons were too far behind to make a comeback in the fourth as Pitman took the 52-31 win.

The Bear Creek Bruins’ shooting was on target in the first quarter, including three 3-point shots, as the Bruins took a 19-8 lead over the Kimball Jaguars on Dec. 16 in the first round of the Annual West Winter Classic. The Jaguars picked up the pace in the second quarter to cut the Bruins’ lead to 28-20 at the half.

Kimball turned the game around in the third quarter as senior Kobe Harris scored eight of his team-high 15 points and Kimball took the 39-38 lead. Kimball kept up the pace in the fourth quarter, led by junior Jacob Sarmiento with six of his 12 total points, to get the 55-52 win. Kimball also got 10 points from junior Benito Ruiz.

The West High Wolf Pack opened the Winter Classic with a 50-44 win over the Millennium Falcons on Dec. 16.

The Falcons started off strong, taking the lead at the start of the first quarter. West started to hit its shots and pulled out to a 13-10 lead at the end of the first. The Wolf Pack kept the lead for the rest of the game, but Millennium kept threatening to take the game back, getting within one point in the second quarter. It was a 2-point game at the half, with West up 23-21.

West came on strong to start the third quarter and extended its lead to 31-21. The Falcons rallied again, cutting West’s lead to 33-31. The Pack came back in the fourth to outscore the Falcons, with sophomores Clarence Shavers, Joe Walker and Xavier Cardona Renshaw all hitting 3-point shots for West in the fourth.

The Mountain House Mustangs opened the West Winter Classic with a 70-46 loss to the Liberty Lions. Scoring details were not available.

The Millennium boys put up a tough battle at Los Banos High on Wednesday, but turnovers ended up being costly for the Falcons. The two teams played a close game for the first three quarters until Los Banos took the advantage in the fourth to get the 52-45 win.

After a close first quarter the Millennium Falcons took control and continued to outscore Stockton Christian for the rest of the game to take the 71-44 win on Tuesday in Stockton.