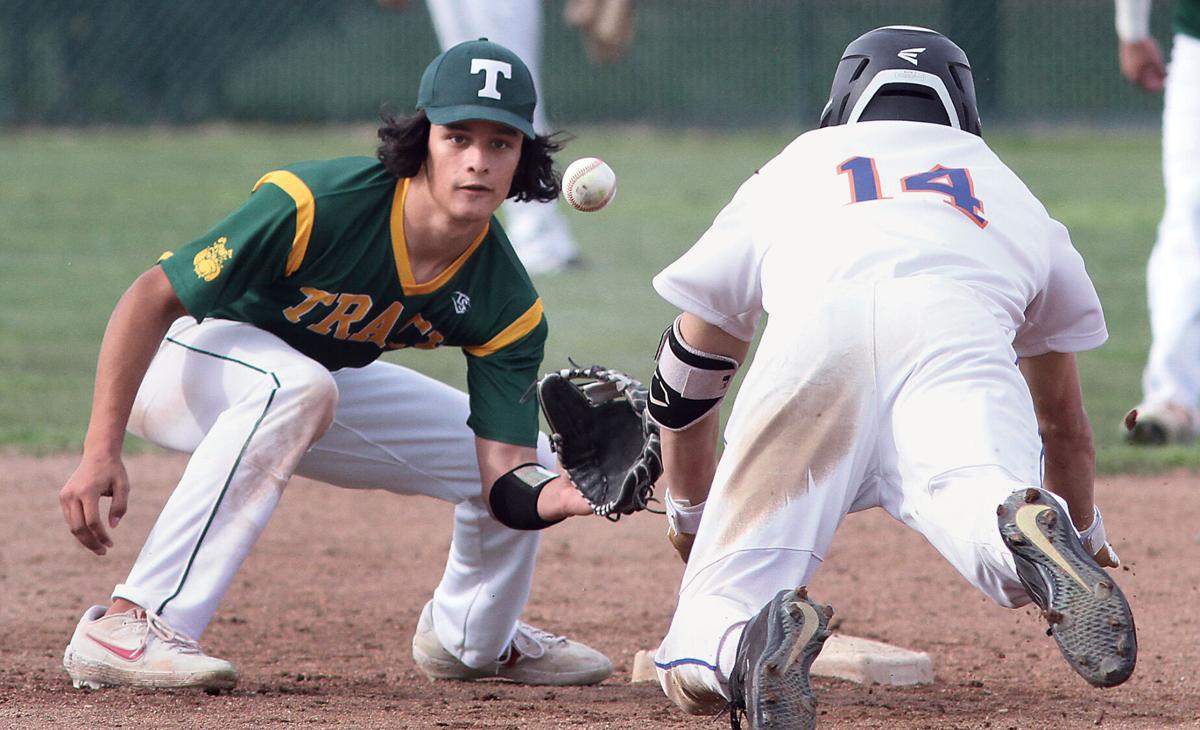 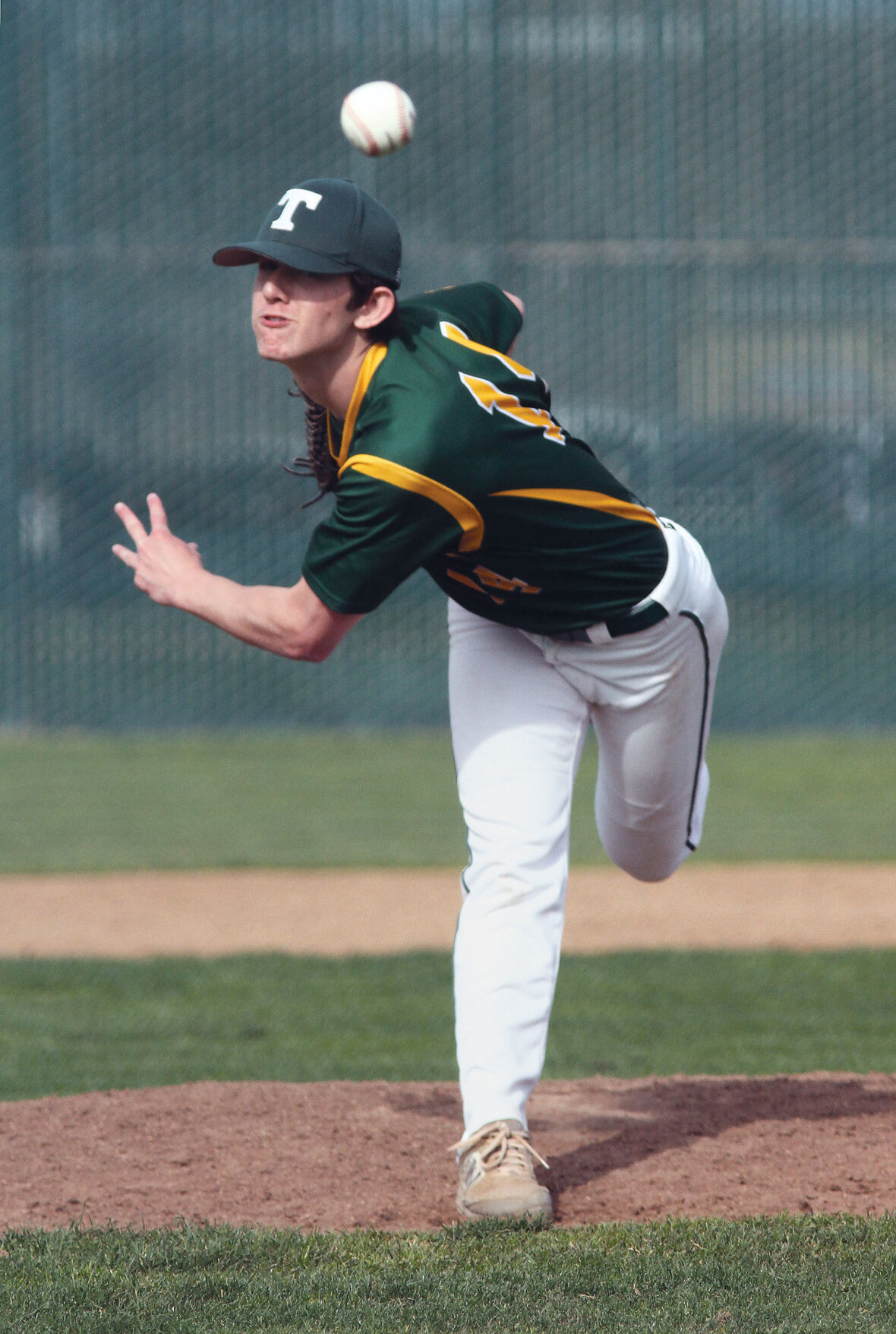 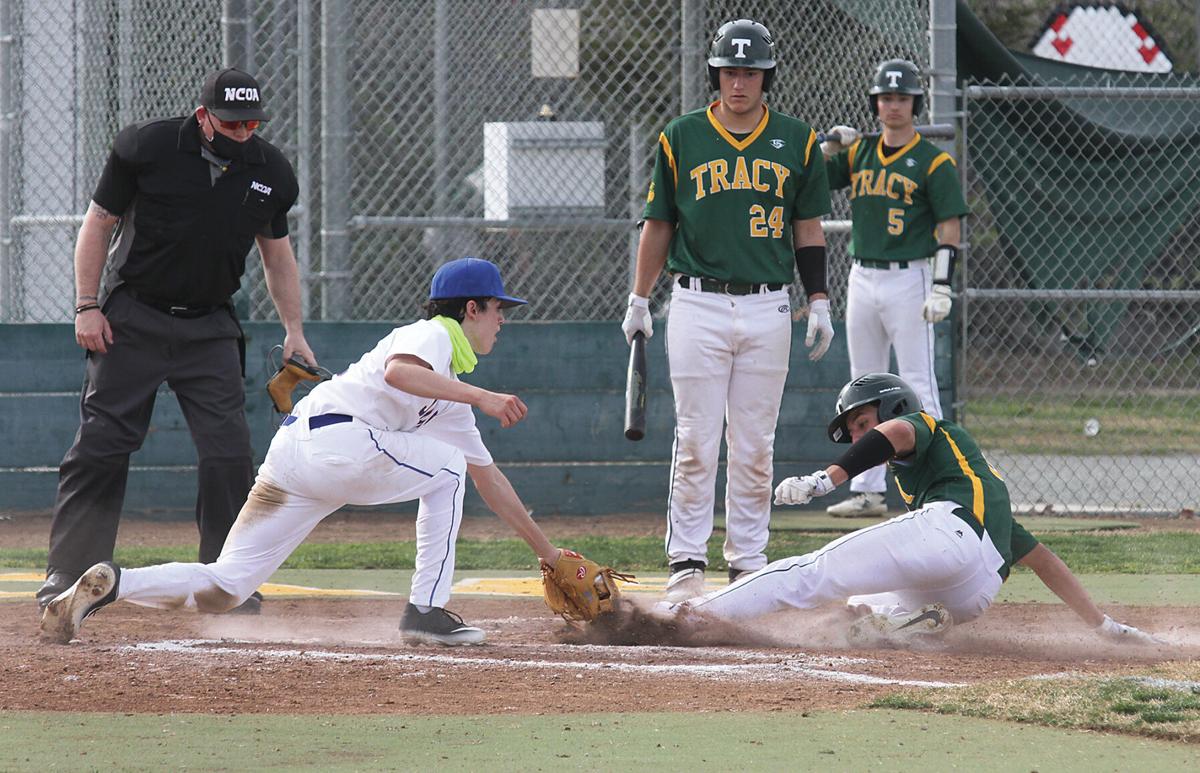 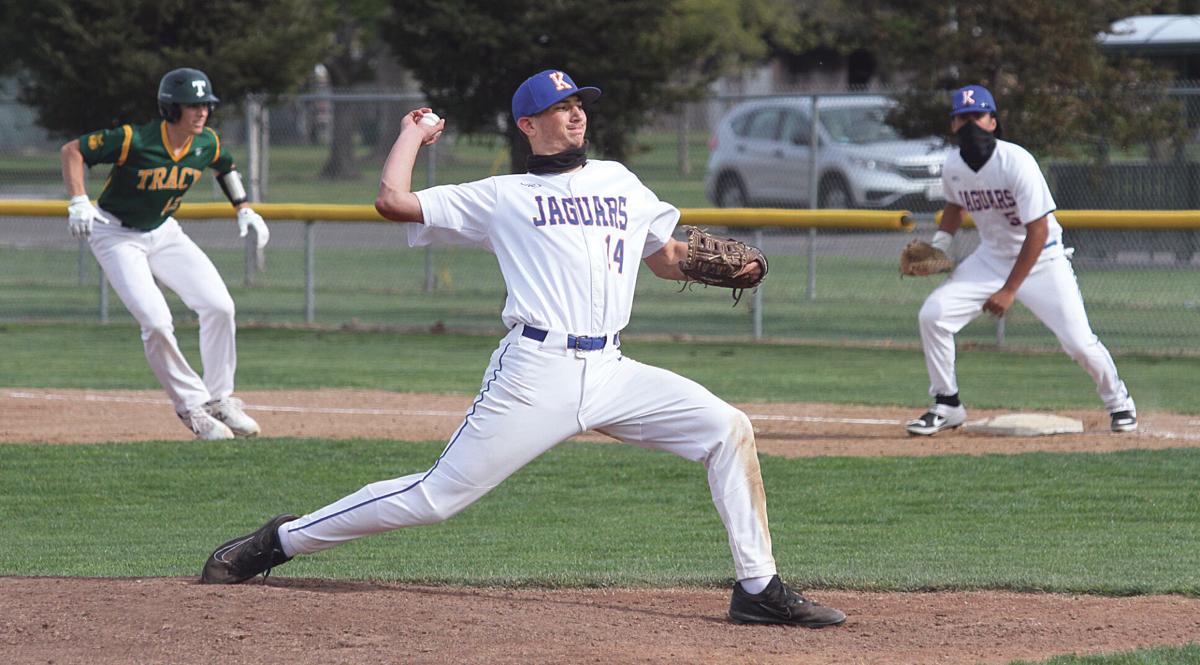 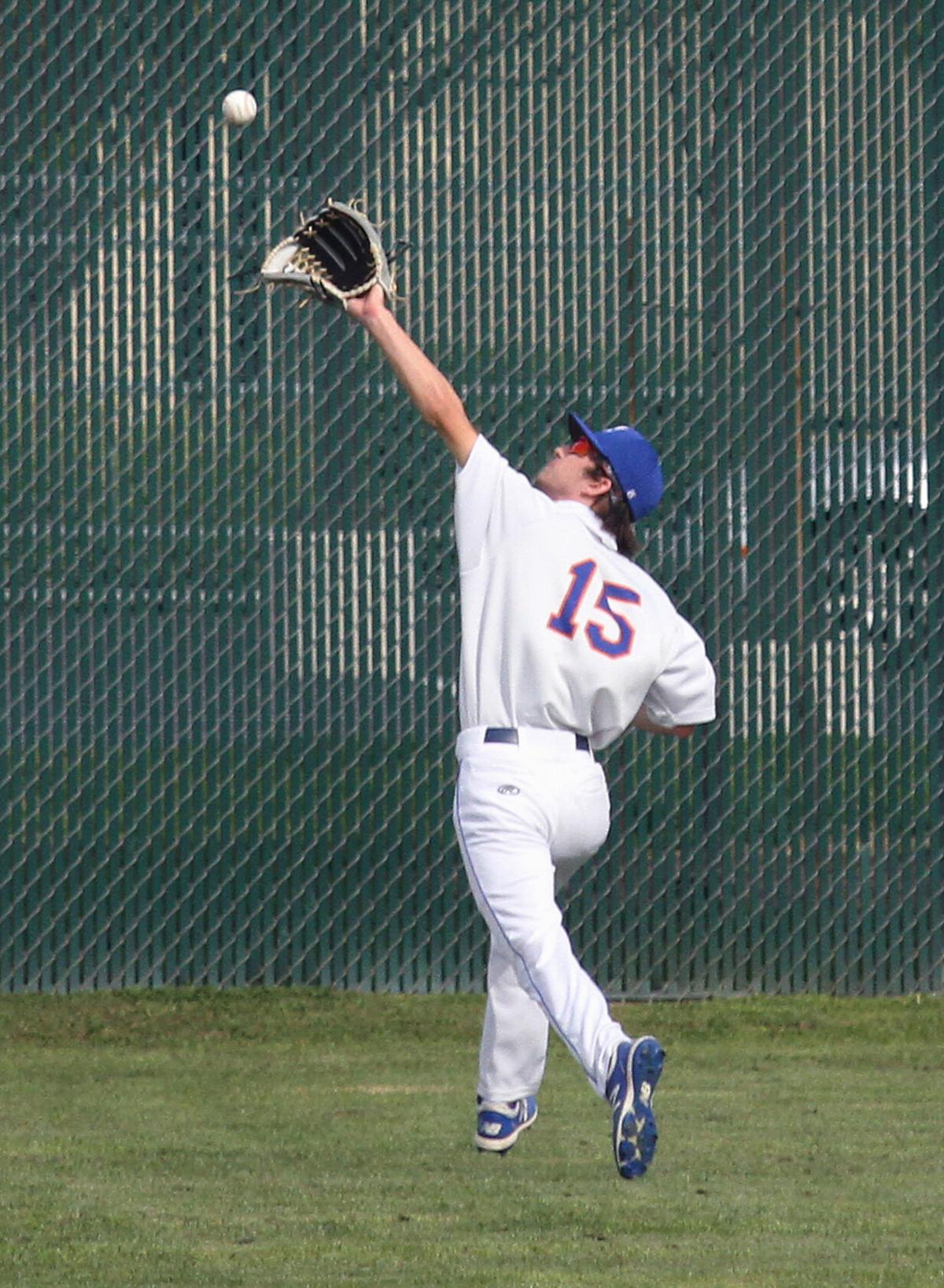 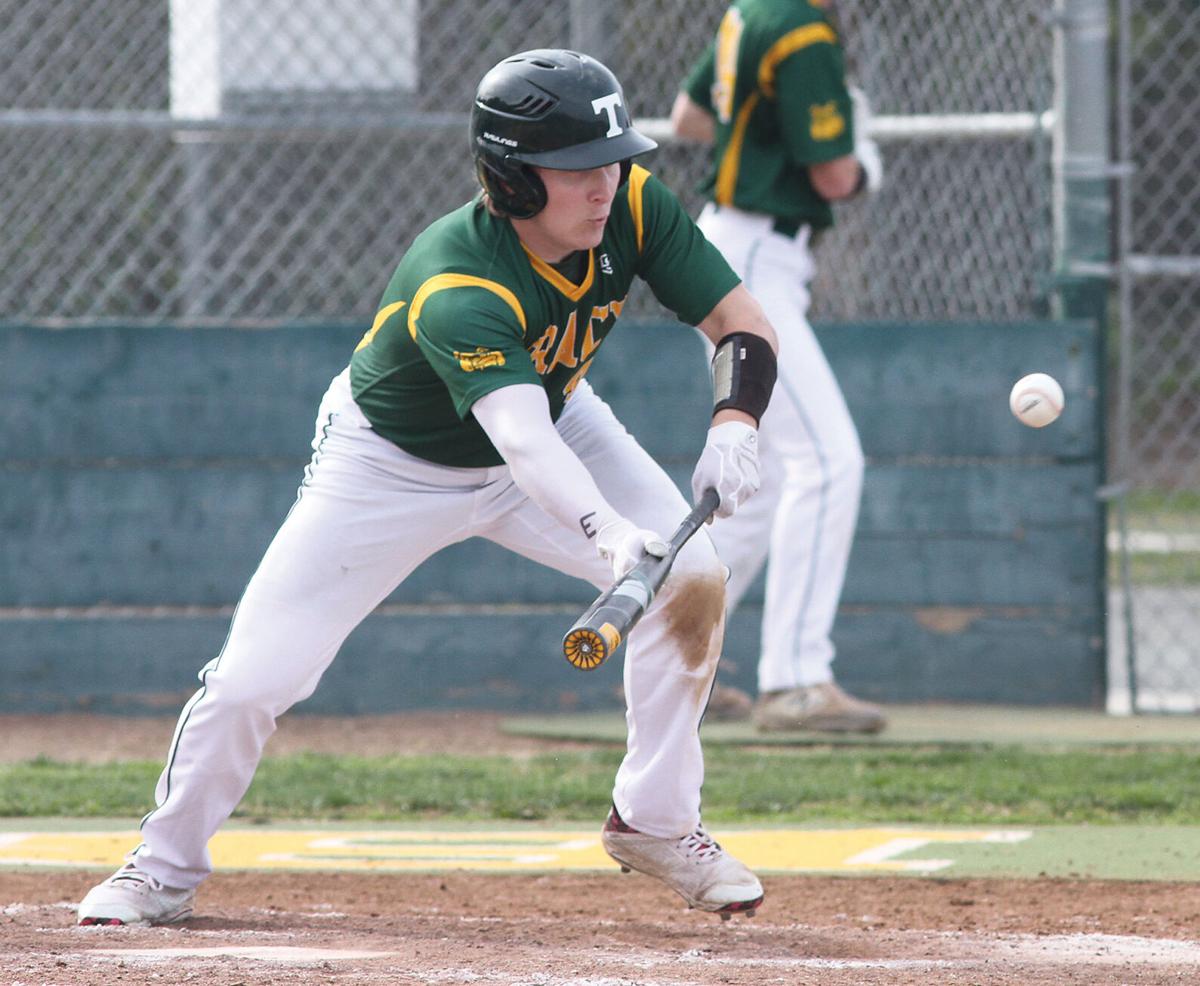 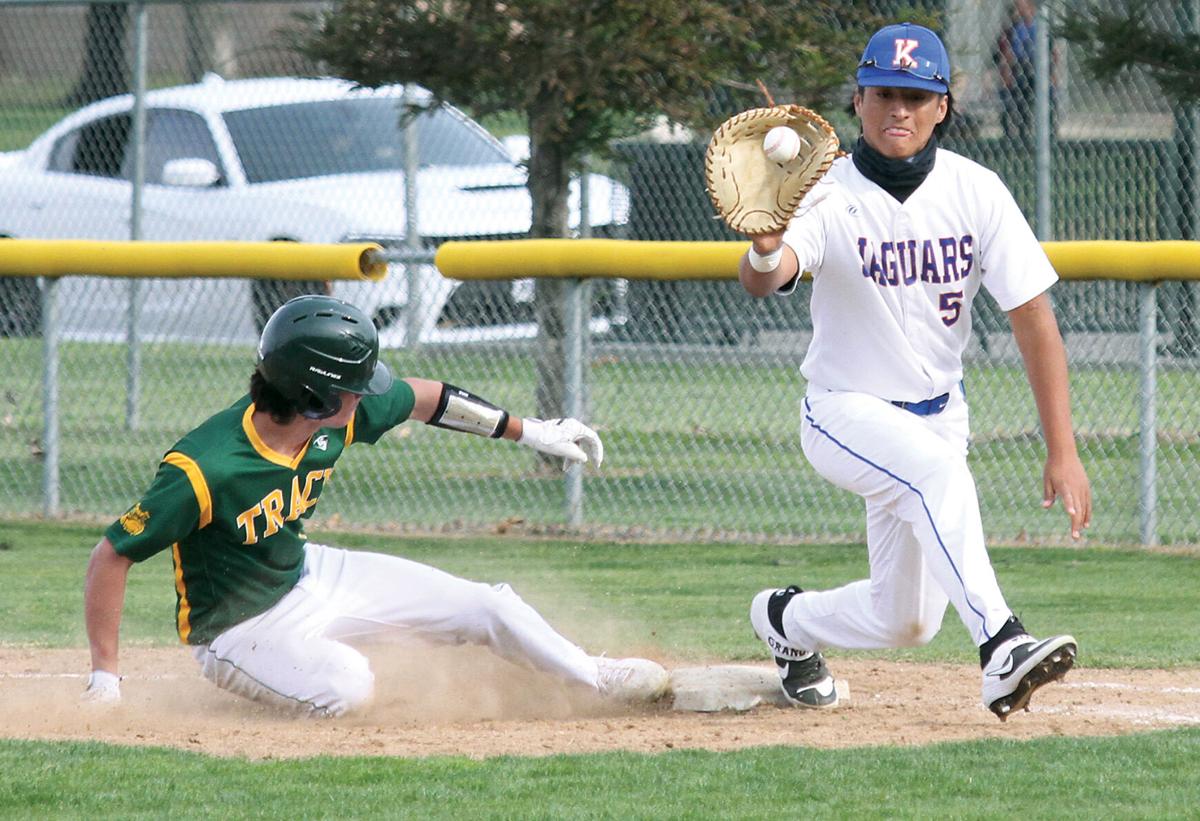 Tracy High’s Noah Deneau (left) gets back to first base ahead of the throw to Kimball High’s Tio Villalobos at first base base Wednesday afternoon at the Monte Vista School ball fields. 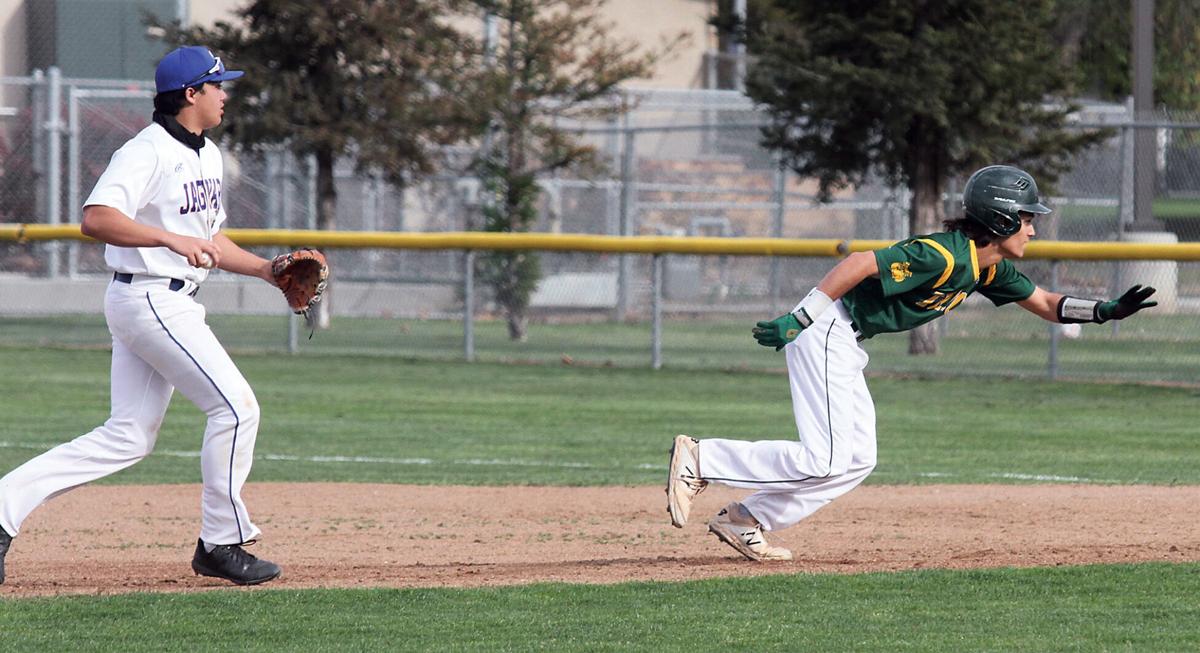 Tracy High’s Noah Deneau (left) gets back to first base ahead of the throw to Kimball High’s Tio Villalobos at first base base Wednesday afternoon at the Monte Vista School ball fields.

The Tracy High baseball team (2-2) pounded out 13 hits on Wednesday to take an 11-5 win over visiting Kimball High on Wednesday at Monte Vista Middle School.

In the shortened 2021 season all teams have been thrown right into competition, without extended pre-season practice periods, and this was one of the few non-league games that both teams will play. Tracy coach Vic Alkire said that requires players to learn and build their team as they go, but Wednesday’s outcome was a big improvement from the first few games.

“Just from yesterday to today, yesterday we made eight errors,” Alkire said, referring to a 6-3 loss at home against Lodi High. “I’ve never had eight errors in a game in my 28-year career. I thought we cleaned it up really nice today.”

The Bulldogs committed only two errors on defense, and Tracy’s pitchers allowed only three hits for the day.

The Kimball Jaguars scored in the first inning when Mason Rivera reached on a fielder’s choice and came home on Dylan Anderson’s single.

The Bulldogs answered with four runs on six hits in the first inning and kept building on that lead with two more runs in the second inning and three more in the third to take an 8-1 lead.

The Jaguars finally got some momentum in the fifth inning, including a leadoff double for Nathan Russo, who scored when Trenton Phillips reached on an error. Phillips scored on a passed ball and Anderson drove in a run on a sacrifice fly.

The Bulldogs answered with three runs in the bottom of the fifth, and Kimball scored one more in the sixth when Lance Price singled and scored on a passed ball.

“We didn’t really have a preseason so we’re working out the kinks, but today we hit well, played defense well,” Bowen said. “We made the routine plays. That’s all you can ask for.”

He added that the team brings the enthusiasm of getting a chance to play after most of last season was cancelled because of COVID-19 and the 2021 season was in doubt up until late last month.

“For this year, I think most kids, especially the seniors, just want a good send-off,” Bowen said. “To just be playing is the main thing for most of the kids out here, but to win as many games as possible would be ideal.”

Tracy sophomore starting pitcher Josh Cortinas got the win after he went four full innings and faced the first three batters of the fifth. He allowed four runs on two hits and four walks before senior Matt Canada came in to finish the game. Canada allowed one run on one hit.

“It’s a great group of young men. We’re going to get our share,” Gallardo said. “They’re going to start understanding the way we communicate and we’ll understand them. We’ll make it work.”

In the Falcons’ first game of the 2021 season, Millennium senior Miles Brown bashed the first pitch of the season for a home run over the left field fence at Billy Hebert Field in Stockton.

It set the Falcons on a pace for a 4-0 win over Franklin High, and was one of seven hits for the Millennium team. Senior Caden Duke contributed three hits, including a double, senior Alijah Gandall tripled, junior Brandon Locke doubled and junior Diego Ruiz also got a hit.

Meanwhile the Millennium pitchers held Franklin scoreless with just one hit for the day. Duke went three innings with no hits or runs and he struck out five batters, and senior Jacob Piazza allowed one hit, no runs, and struck out four.

The West High baseball team opened with a three-run first inning, which was enough to secure a win against Kimball High on Saturday at West High.

Senior Freddie Morales doubled and batted in two runs, and senior Ryan Villena doubled and also drove in a run. Kimball came back with a run in the second inning and scored again in the top of the seventh.

Statistics for the Kimball team were not available.