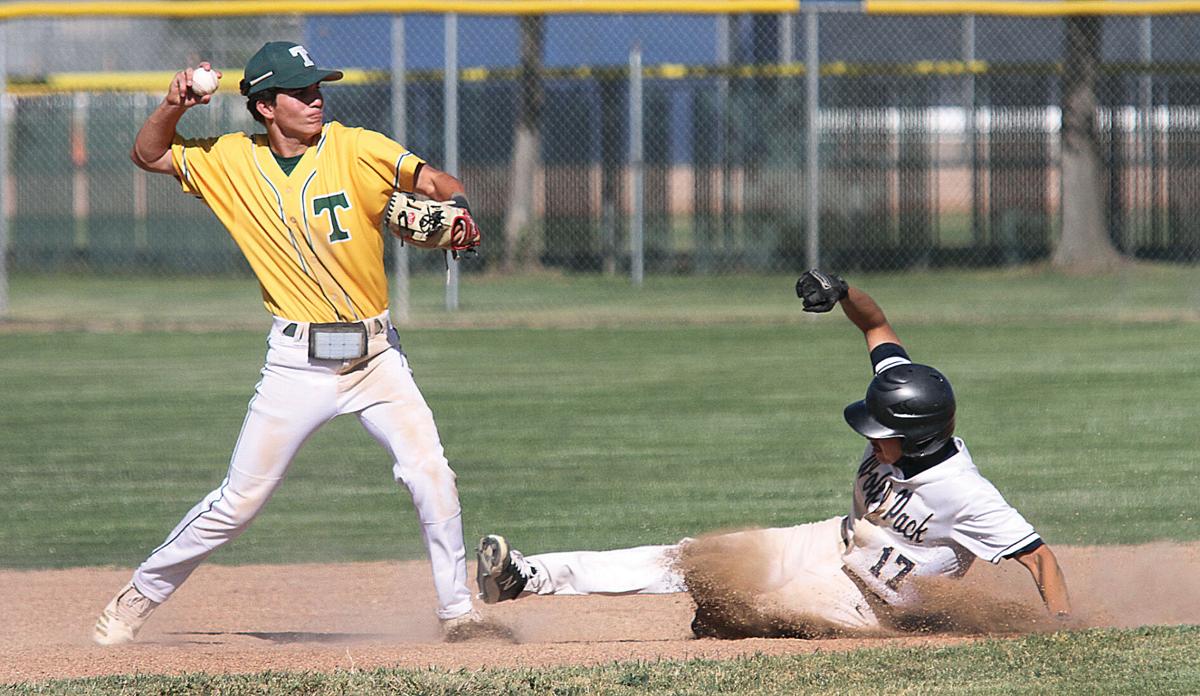 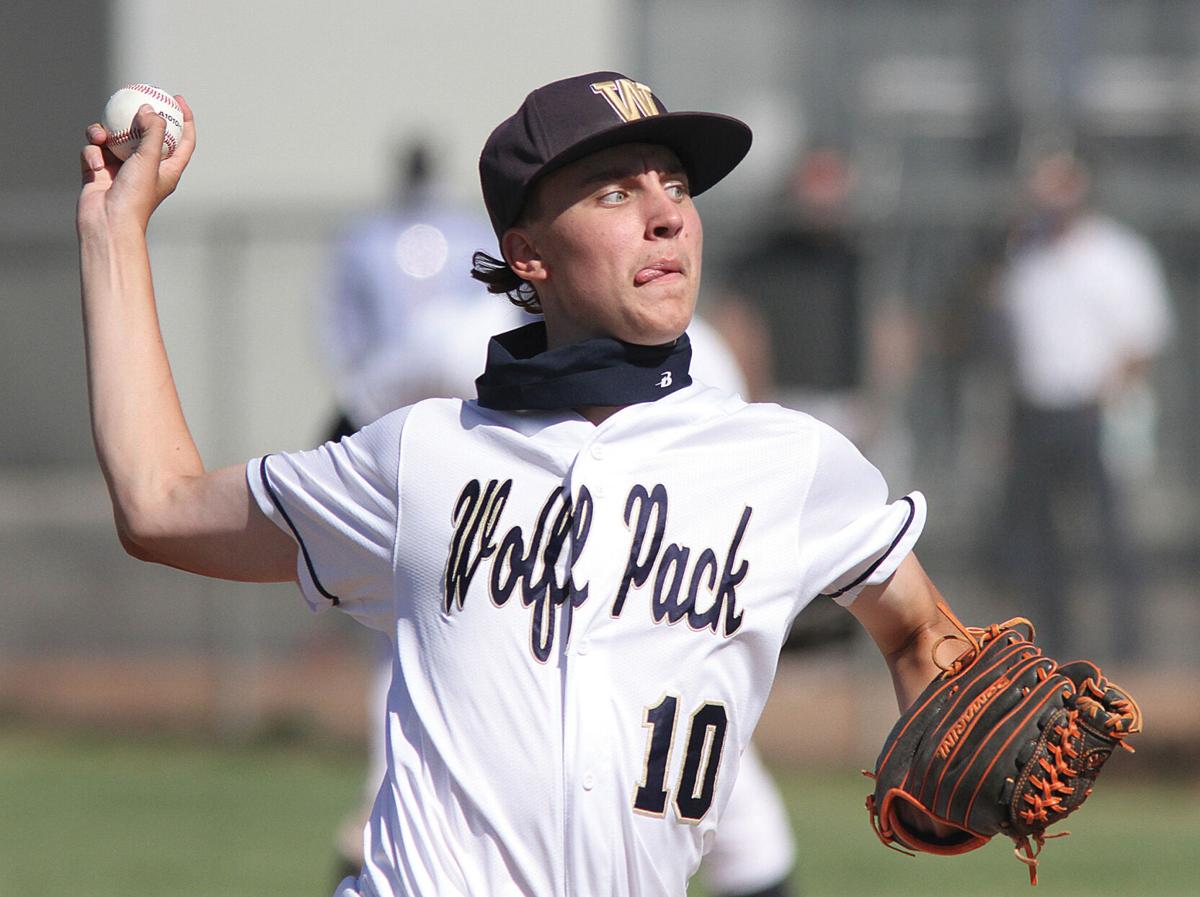 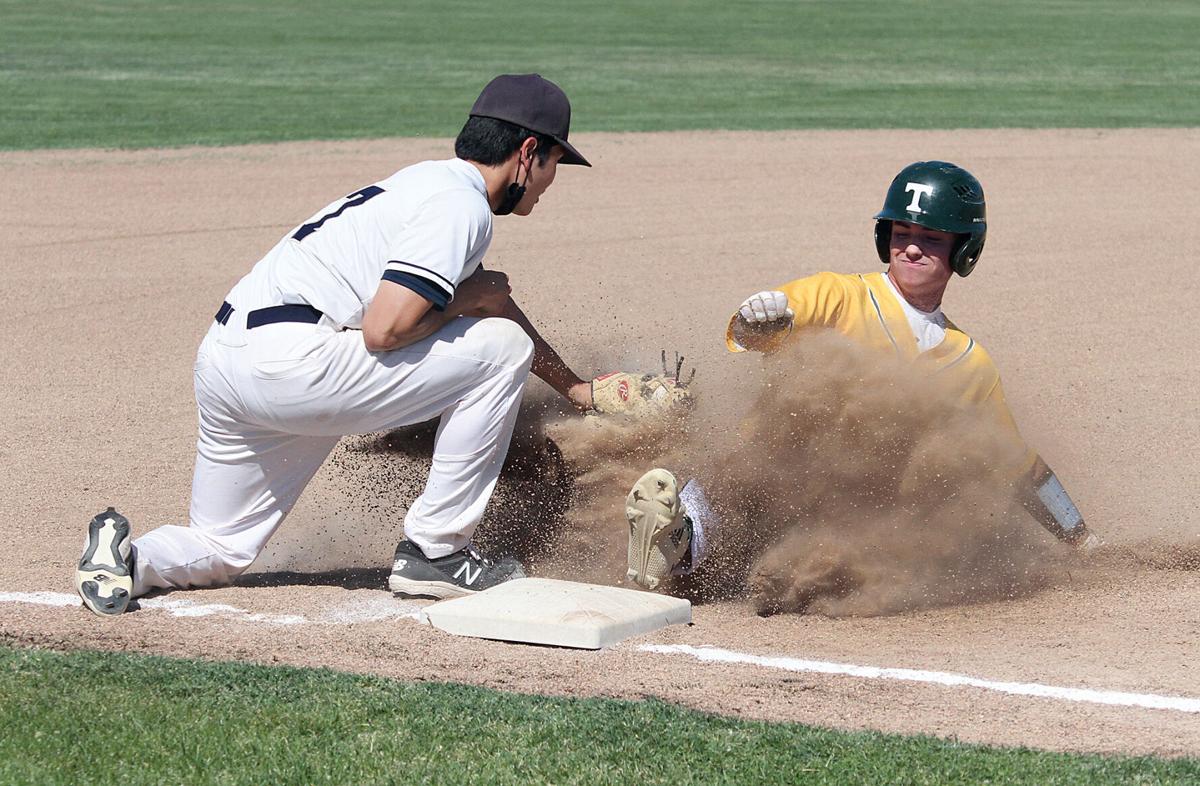 West High junior Gavin McDonald waits to put the tag on Tracy High senior Cameron Pereira as he is caught out on the steal attempt at second base Tuesday afternoon at West High. 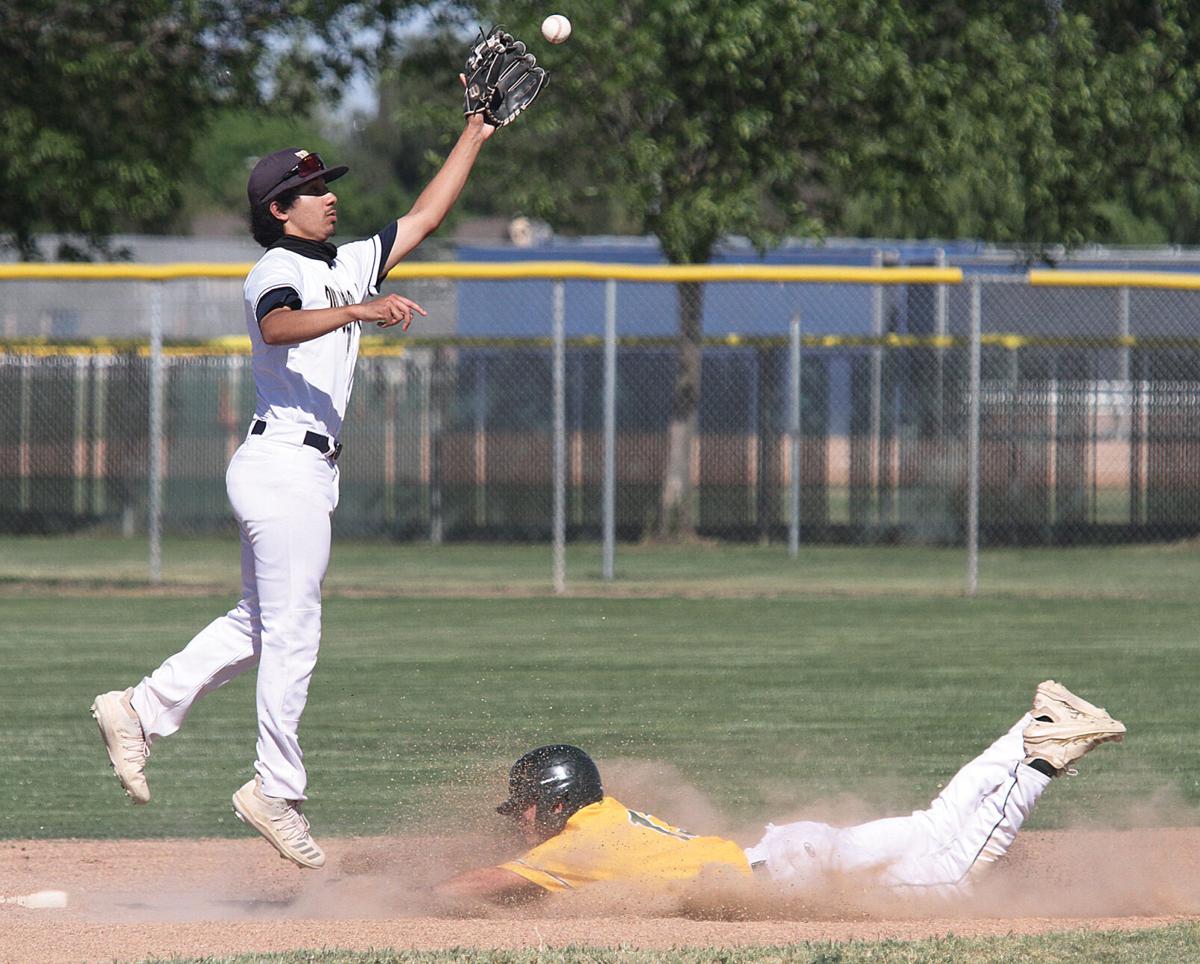 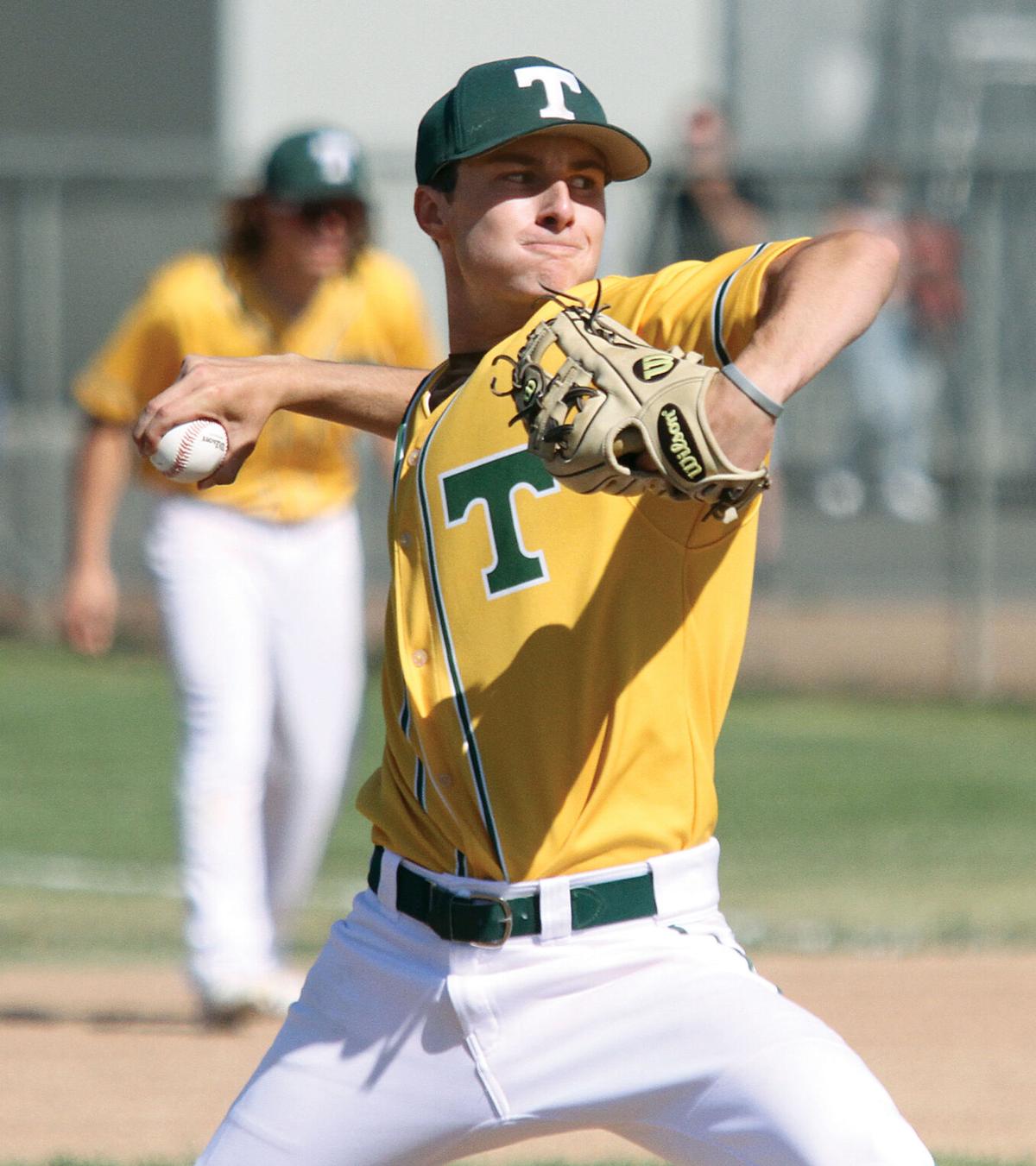 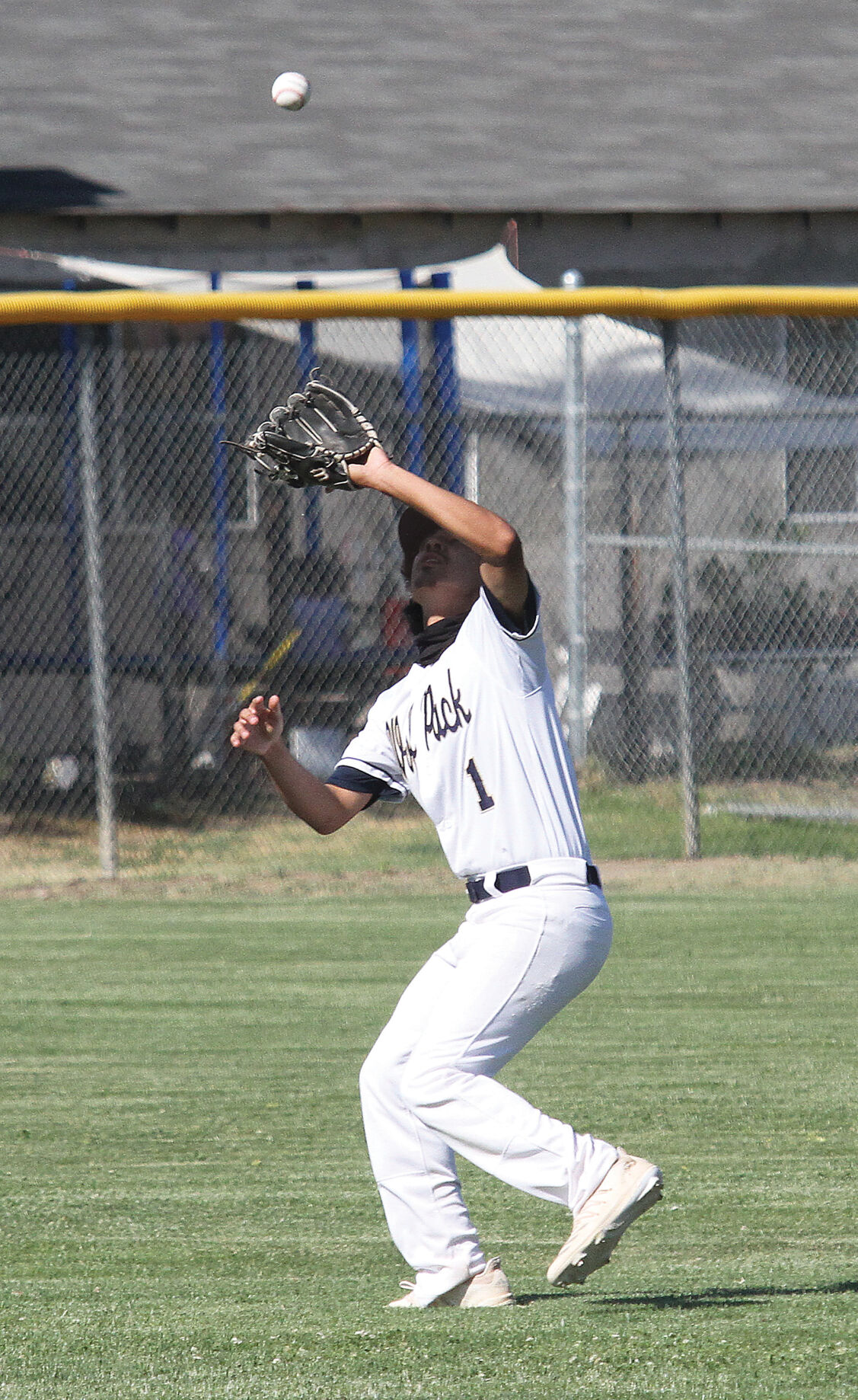 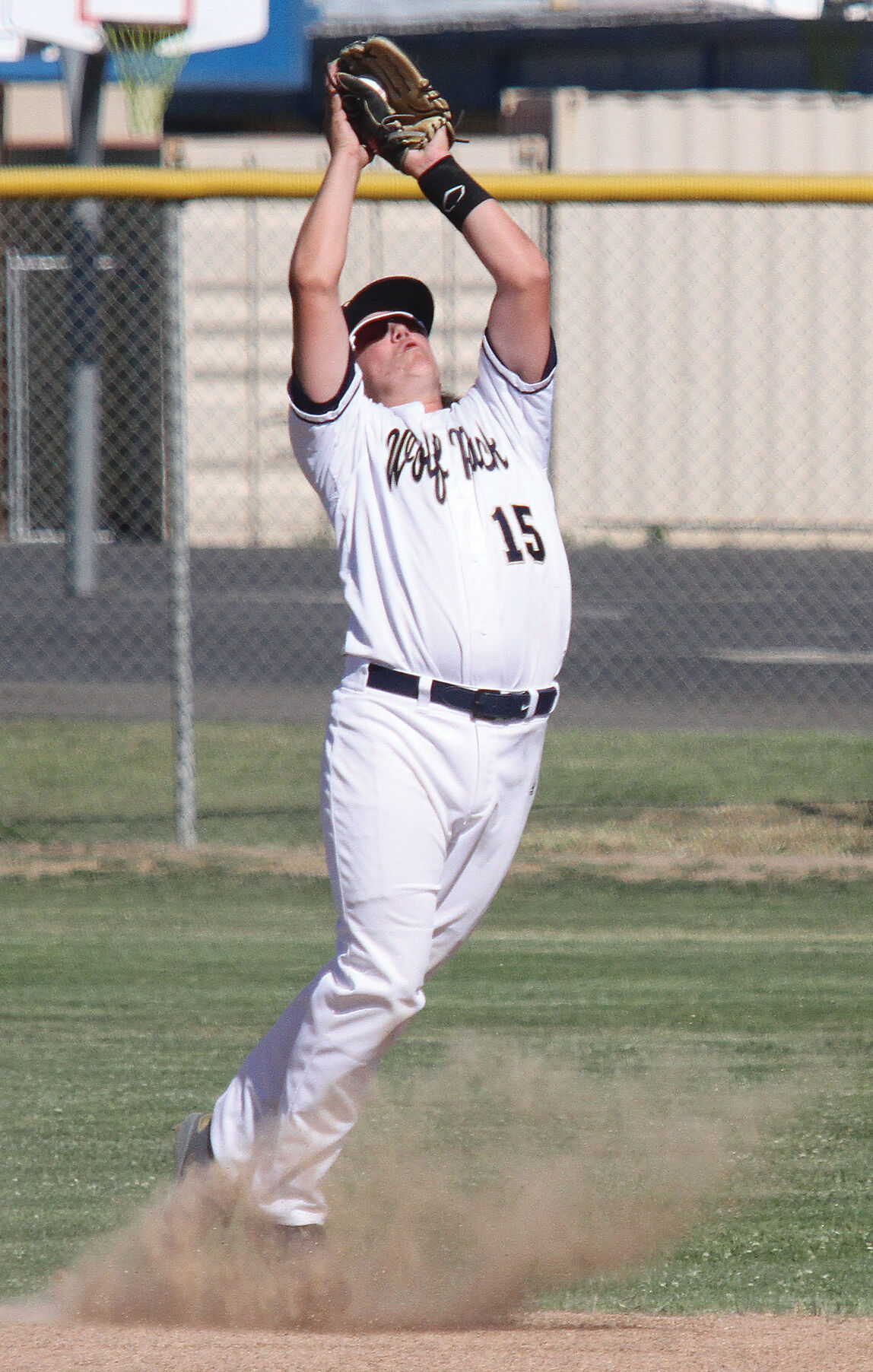 West High junior Gavin McDonald waits to put the tag on Tracy High senior Cameron Pereira as he is caught out on the steal attempt at second base Tuesday afternoon at West High.

The Tracy and West baseball teams wrapped up their Tri-City Athletic League season on Tuesday with the Bulldogs taking a 10-2 win at West High.

The Bulldogs (11-10, 8-7 TCAL) came out with bats blazing for a four-run first inning on Tuesday at West High. Four consecutive base hits – including a single for junior Drew Frederick, a double for sophomore Daniel Behrmann, a single for Drew Giannini and a double for senior Kyle Corona, followed by a sacrifice fly for senior Shane Bowen and an RBI double for Cooper Wilcox – gave Tracy the early lead.

West (2-16, 0-14 TCAL) answered with two runs in the bottom of the first, with a double for senior Freddie Morales, followed by senior Chris Chan’s RBI triple to deep right-center field and senior William Aviles RBI single.

“The guys before me did a really good job getting on. I was a little nervous because you want to come through for the team obviously,” Bowen said. “I’m just glad I produced. That’s why I’m batting five and that’s what they need me to do.”

In spite of Tracy’s 13 hits, West Coach Dante Dell’Aringa said the Wolf Pack did a respectable job pitching and on the field.

“We had a couple innings there where we gave them a couple free passes. For the most part they did a good job with their bats and put in spots where we weren’t, and you’ve got to tip your hat sometimes,” he said.

“I felt like we played pretty clean baseball. A couple plays here and there defensively where we could have done things different, but at the end of the day you’ve got to score runs, and two in the first isn’t going to get you through all seven.”

Tracy coach Vic Alkire said that Tuesday’s game was a chance for Tracy to build some confidence after a series of losses.

“We had struggled a little bit recently. We lost some really close games, some extra inning games recently,” Alkire said. “I think the kids were a little bit disappointed and I was really proud of them that they came out today and put that all aside and just played for today.”

Sophomore Jacob Jones pitched the first two innings, and the Bulldogs used a different pitcher for each inning after that. West got only one more hit: a single for Aviles in the sixth inning.

Aviles, one of three returning varsity players on the Wolf Pack team, said the season has been about building skills and unity among the new players.

“We’re a really young team, so we have a lot of work to do, a lot of learning what we do on varsity. Once we got into a groove, we all became a family and worked together. Even though it doesn’t equal a lot of wins, we still did better than we probably were projected to do.”

The Falcon batters came alive for six runs in the third inning to take an 8-0 lead and kept scoring for the 11-4 win in Stockton on Tuesday.

Duke was also the Falcons’ leader at the plate with two triples and a single as he batted in four runs. Senior Jacey Zuniga doubled twice and drove in two runs, and Gandall and senior David Martinez also had two hits each.

Mountain House sophomore Ny'zaiah Thompson hit a triple and two doubles to lead the Mustangs to an 11-1 win in the second game of Tuesday’s doubleheader in Lathrop. Junior Chase Patrizio went two-for-two including a double, and junior Isaiah Castillo went two-for-two and batted in a run.

Patrizio pitched all five innings and allowed one hit and one unearned run.

The Millennium Falcons held an 11-1 lead after three innings on Saturday at Mountain House High. The Mustangs came up with a five-run fifth inning and another run in the sixth, but the Falcons maintained their lead for the 11-7 win.

Leading batters for the Mustangs included junior Isaiah Castillo with a double and three RBIs. Junior Chase Patrizio had two hits and drove in two runs, and sophomore Cameron Valentine tripled, doubled and drove in a run.

Millennium senior Jason Piazza pithced for three innings and allowed no hits and one run while striking out six batters. Junior Christian Sanderford and senior David Martinez pitched one inning each, with Martinez giving up a run and two hits, and junior Brandon Locke allowed two hits and five unearned runs over two innings.

Mountain House junior Jareth Franco give up a hit, four walks and five runs in 2/3 of an inning, junior Joseph Higgins pitched for 2 1/3 innings and allowed five hits and six runs, one of them earned, and sophomore Roy Gardner allowed not hits or runs and struck out seven batters over four innings.

Tracy High senior Kyle Corona hit a grand slam in the first inning and a two-run homer in the second to lead the Bulldogs to a 6-5 lead after three innings on April 29 at Monte Vista Middle School. The Tokay Tigers made their comeback in the fifth and sixth innings to get the 10-6 win.

The Millennium Falcons opened with runs in the first and second innings to take a 5-0 lead on April 29 at Delta Charter High, and Millennium closed with a nine-run rally in the sixth inning to get the 15-0 lead.

Leading batters for the Falcons included senior Alijah Gandall with a triple, a single and two RBIs, and senior Chad Maciel also had two hits and two RBIs, while junior Diego Ruiz doubled, singled and batted in a run. Also driving in multiple runs were seniors Jacey Zuniga and Anthony Gonzalez and junior Brandon Locke.

The Mustangs came up with two runs in the third inning and held on for the 2-1 victory over Patterson High on April 29 at Mountain House High. Senior Miguel Lomeli drove in a run and seniors Taylor Yuki and Ernesto De Leon, junior Isaiah Castillo and sophomore Cameron Valentine all had hits.

Valentine pitched all seven innings and gave up four hits and one unearned run while striking out eight batters.