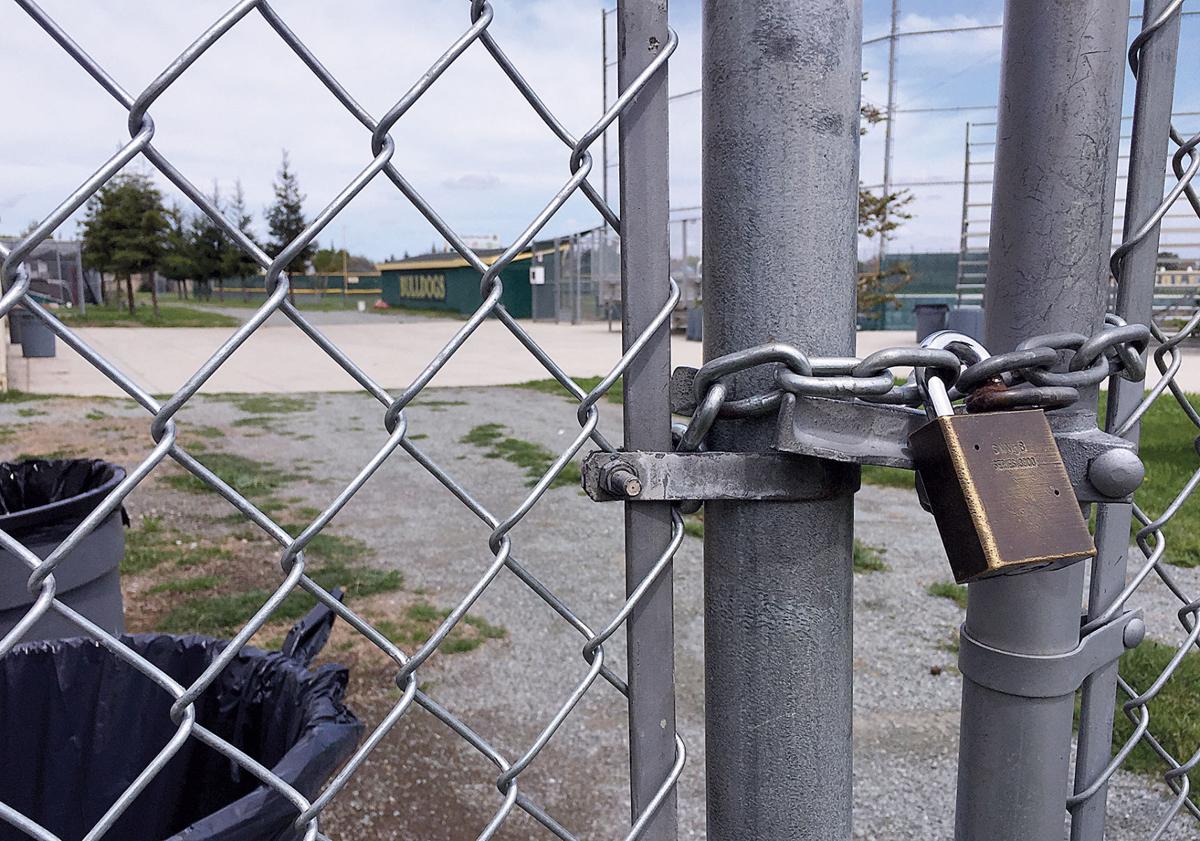 The fields at Monte Vista Middle School, where the Tracy High Bulldogs baseball team plays home games, are closed because of the COVID-19 stay-at-home orders. The California Interscholastic Federation effectively ended the spring 2020 sports season last week when it announced that all postseason events, including championship tournaments and meets, were canceled. 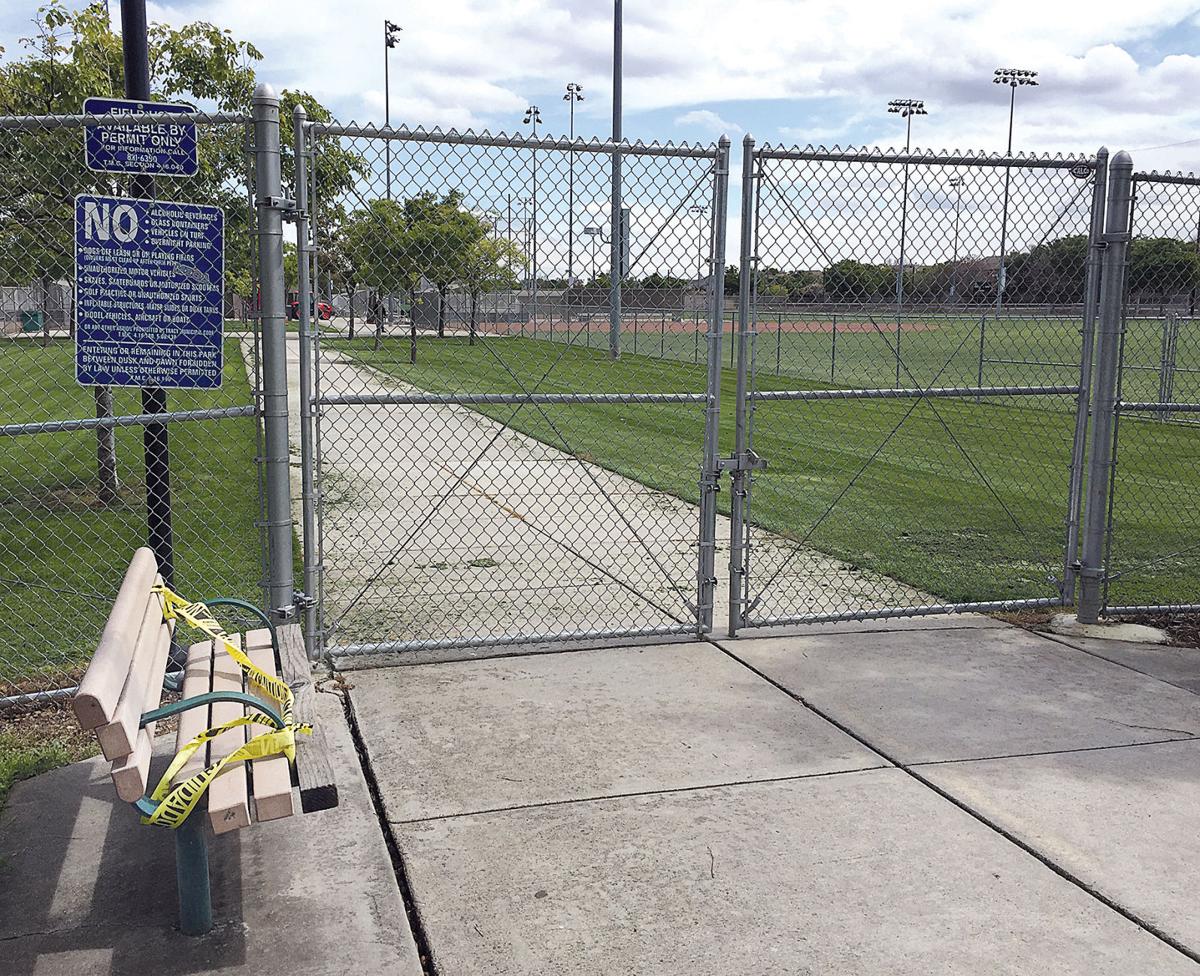 The fields at Tracy Sports Complex, where the Tracy High softball team plays home games, are closed because of the COVID-19 stay-at-home orders. The California Interscholastic Federation effectively ended the spring 2020 sports season last week when it announced that all postseason events, including championship tournaments and meets, were canceled.

The fields at Monte Vista Middle School, where the Tracy High Bulldogs baseball team plays home games, are closed because of the COVID-19 stay-at-home orders. The California Interscholastic Federation effectively ended the spring 2020 sports season last week when it announced that all postseason events, including championship tournaments and meets, were canceled.

The fields at Tracy Sports Complex, where the Tracy High softball team plays home games, are closed because of the COVID-19 stay-at-home orders. The California Interscholastic Federation effectively ended the spring 2020 sports season last week when it announced that all postseason events, including championship tournaments and meets, were canceled.

The California Interscholastic Federation announced on Friday that the high school spring sports season is over because of the COVID-19 pandemic.

CIF Executive Director Ron Nocetti released a statement Friday afternoon after a meeting with 10 section commissioners and said that all section, regional and state championship events would be canceled.

Nocetti said that the cancellation took into account statements by Gov. Gavin Newsom, who issued a statewide stay-at-home order on March 19, and State Superintendent of Public Instruction Tony Thurmond, who last week urged all schools in California to shift to remote instruction through the remainder of the school year.

Teams had just two full weeks of play before the CIF suspended the season on March 17. Many local teams had canceled events the week before that after Tracy Unified, Lammersville and New Jerusalem school districts all issued statements on March 13 that their campuses would close for at least the rest of March. Thurmond’s letter last Tuesday affirmed that campuses would remain closed for the rest of the school year, though schools will turn to remote teaching to finish the academic year.

Tracy High baseball coach Vic Alkire said that in all of his years of coaching, he never expected a season could suddenly end this way.

“Every year now for the 27 years I’ve done it, I’ve made my schedule out and it was 28 games, and getting ready for playoffs,” he said. “Never once did it cross my mind that we’d play less than 28 games.

“You don’t plan for it and don’t prepare for it, and it came pretty abruptly.”

At first, it was expected to be a three-week halt to games, but as the new coronavirus spread and stricter stay-at-home orders were issued, it became clear that the season was unlikely to begin again.

“You still had hope that a month from now, six weeks from now, we’d get back into our school year, and then you realized that it was over,” Alkire said.

He said the biggest effect was on the 12 seniors on this year’s Tracy High varsity team, many of whom had been playing since they were in local youth leagues. Some have already made plans to play in college, but for others, this was to be their farewell season.

Kimball High’s track and field coach and athletic director, Ben Trombley, said some athletes had looked to the spring 2020 season to be a factor in their college plans.

“We had some kids who were on the border of where they would go to college,” he said, adding that some track and field athletes hoped their marks or times this spring would be enough to convince college scouts to consider them. “It’s those kinds of things that are the most disappointing.”

Athletic directors are also trying to figure out how to handle their usual year-end awards. Those are typically reflective of a senior athlete’s four years of high school sports, but in some cases, the spring sports season is where an athlete stands out.

“Some of our candidates haven’t done their sport yet, so it will impact who gets nominated,” Trombley said. “We want to make sure we honor those kids, but it’s a unique situation.”

Tracy High athletic director Gary Henderson said the school would look for some way to recognize the senior class. On Wednesday, he was making a list of all the seniors in spring sports in an effort to create a series of yard signs to acknowledge them. He added that the school’s blanket awards, which go to one male athlete and one female athlete, are a tradition that the school will continue, though the details of how that will come together have yet to be confirmed.

“As for the blanket award, we’ll have to remotely vote on that,” he said. “I don’t see a senior awards night that typically that would be given out at. That would have to be postponed or something smaller.”

Meanwhile, the spring 2020 season goes down in record books as a partial season.

“Obviously there’s going to be an asterisk, that it didn’t get completed, so we can’t award league champions or all league,” Henderson said. “We didn’t even start league in most sports.”

Will DeBoard, assistant commissioner for the Sac-Joaquin Section, said that while some teams did have games, without any section championship tournaments or meets, the section won’t have any official record of the season.

“Ultimately, it’s a lost season,” he said. “It’s something most of us haven’t experienced.”

The section’s official stance relates to the cancellation of the playoffs and year-end meets, but that doesn’t prohibit teams from being active should state and local stay-at-home orders be lifted within the next few weeks.

“Let’s say things improve to where we’re in mid-May, schools can go out and play games, but there won’t be any postseason,” he said.

He added that teams could still count statistics from the first two weeks toward athletes’ individual records, such as career hits and strikeouts. The same goes for track and field and swimming times recorded during any meets or dual matches.

The section also still plans to announce its Dale Lacky scholar-athlete scholarships this month. The awards breakfast originally scheduled for April 21 has been canceled, but DeBoard said the section will release information on the recipients via Twitter throughout that week.

After that, coaches will have to start thinking about how the fall season will begin. Henderson noted that limited practices for fall sports, football in particular, typically begin at the start of May, with summer sports camps to follow, but it’s unclear whether the COVID-19 quarantines will be lifted by then.

“CIF has to listen to what the state and local governments are saying,” he said. “We can’t really plan for anything until we hear from them.”