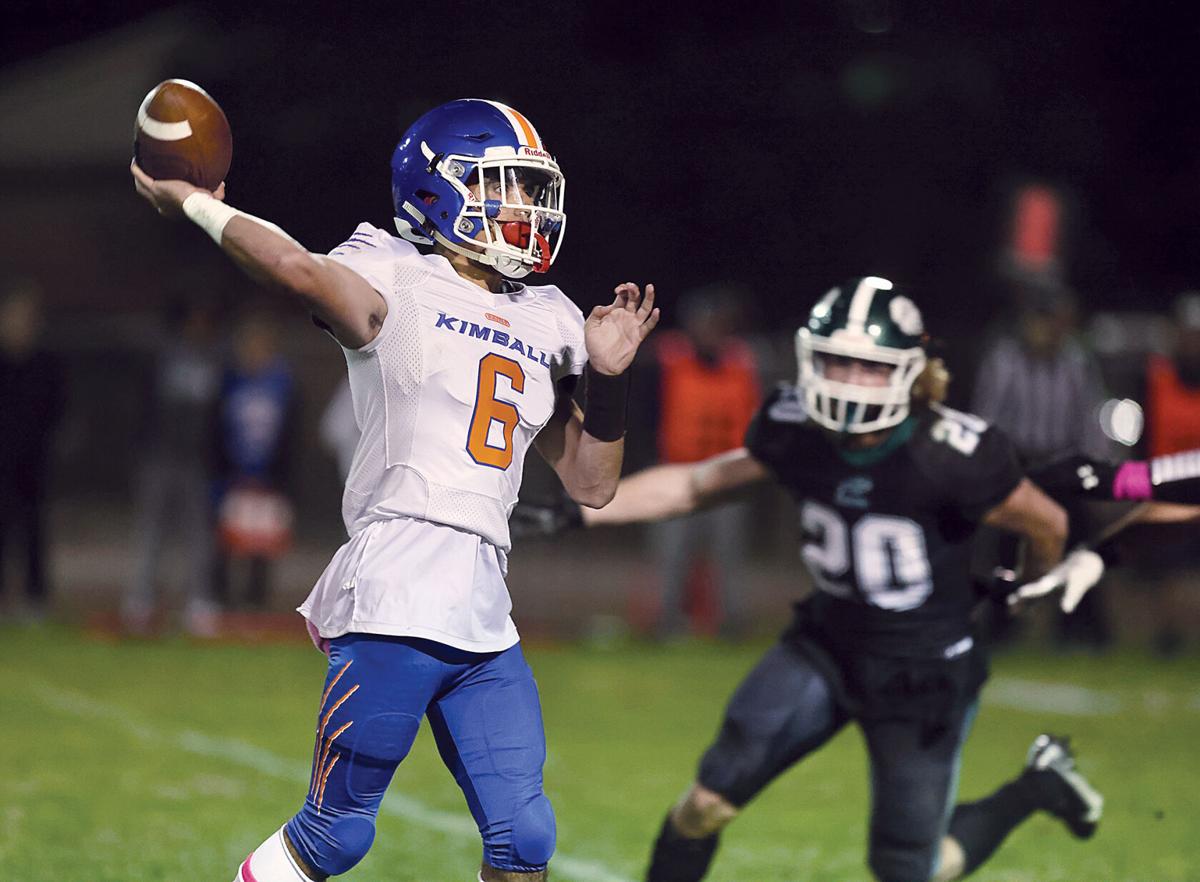 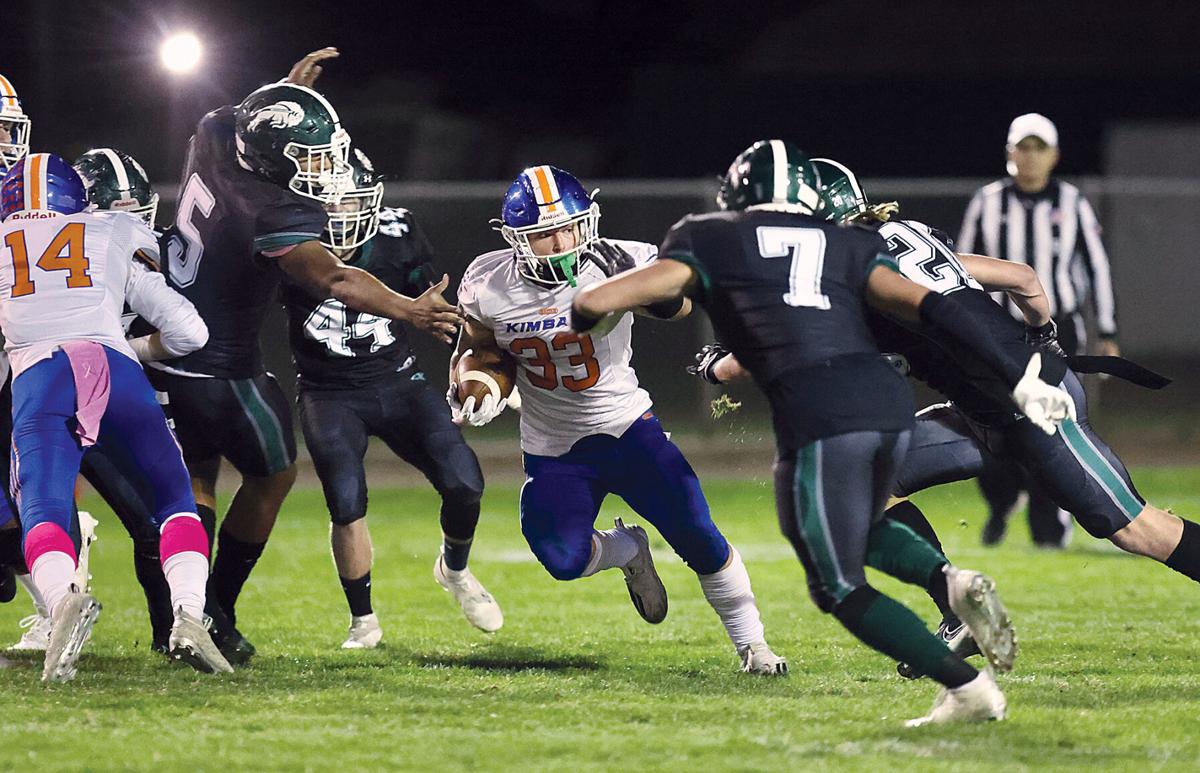 The Kimball Jaguars claimed another key Valley Oak League win on Friday at Manteca High, defeating the Manteca Buffaloes 58-41 as the Jaguars secured second place in the VOL and maintained their place at the top of the Sac-Joaquin Section Division 4 playoff rankings.

Senior quarterback Nicholas Coronado delivered 500 passing yards on 26 of 44 passes. That puts him at 3,321 passing yards for the season, making Coronado the state passing leader and No. 4 in the U.S., based on statistics reported on MaxPreps.com.

The Jaguars answered when Coronado completed a pass to Rivera, a 73-yard touchdown that put Kimball up 52-41, and the Jaguars sealed the win with one more touchdown, Coronado’s 20-yard pass to Clifton, to make it a 58-41 game.

The Jaguars also scored on five 2-point conversions, including a rushing conversion for Rivera, and receptions for Anderson, Marieiro, and seniors Chinedu Nwankwo and Eric Gordon.

The Calpreps.com playoff rankings have Kimball as the No. 9 team in the Sac-Joaquin Section, and the top team in the Division 4 rankings. A top seed in the 12-team Division 4 bracket would give Kimball a bye for the first week of playoffs, and home field advantage for the second round and semifinals.

The Tracy High Bulldogs took an early advantage and held onto it on Friday at Tokay High in Lodi.

The Bulldogs (4-5, 1-3 Tri-City Athletic League) won it 41-28 after they outpaced the Tokay Tigers (5-4, 1-3 TCAL) on offense, covering 426 yards compared to 372 for Tokay. Tracy made the most of its rushing game, with 10 players accounting for the Bulldogs’ 314 rushing yards, including four players who ran in touchdowns, while junior quarterback Cameron Ross-Escobar passed for 112 yards on four of eight passes, including two touchdown passes.

The Bulldogs scored first on a 31-yard pass from Ross-Escobar to senior Tyler Ward, and the Bulldogs took a 14-0 lead in the second quarter on senior Mason Myers’ 13-yard touchdown run. Tokay scored next, and Tracy extended its lead when senior Austin Ho-Sy scored on a 40-yard run, contributing to his 77 total rushing yards on five carries. Tokay scored after that to make it a 21-14 game in Tracy’s favor, which is as close as the game would be for the rest of the night.

Ross-Escobar passed to junior Kurtis Maynor to put the Bulldogs up 28-14 at the half. The Bulldogs scored again in the third quarter on a 57-yard touchdown run for senior Cody Lammerts, and again in the fourth when senior Logan Murray ran the ball in from the 4-yard line.

Tracy senior kicker Kyle Wright made all five of his point-after kicks, and the Bulldogs had one failed 2-point conversion attempt.

Tokay scored twice in the fourth quarter to make it a 41-28 game. The Tigers’ night included 291 passing yards and 81 rushing yards.

With the win the Bulldogs maintain their place in the Calpreps.com rankings, which will decide which teams go to playoffs. Tracy is ranked 41st overall in the Sac-Joaquin Section and 13th in Division 2, meaning that the Bulldogs will have to defeat West in their final game of the regular season on Friday, and see some shuffling among the top teams in the Division 2 rankings, if they are to have a chance of moving into the top 12 that will make the playoff bracket.

The Mountain House Mustangs and Ceres Bulldogs battled through Friday night’s Western Athletic Conference game on Friday at Mountain House High, with the Mustangs taking back the lead in the fourth quarter on a point-after kick and then grabbing a couple interceptions at the end to hang on to the 21-20 win.

Ceres (5-4, 3-3 WAC) scored in the first quarter, and Mountain House (4-5, 4-2 WAC) tied it up in the second quarter on sophomore Amare Brooks’ 2-yard touchdown pass to junior Roy Gardner, with senior Dion Qadir making the point-after kick. Gardner scored again on a 17-yard run, and Qadir’s kick put Mountain House up 14-7 at the half.

Ceres scored twice in the third quarter, but missed the kick on the Bulldogs’ second touchdown of the quarter, which put Ceres up 20-14.

The Mustangs answered in the fourth quarter with a 17-yard touchdown pass from Brooks to senior Dexter Francis, and Qadir’s third point-after kick of the night put the Mustangs up 21-20.

The Mustangs will need a win against Lathrop on Friday if they are to have a chance at advancing far enough in the Sac-Joaquin Section’s Division 4 rankings to make playoffs. After Week 9 they are ranked 15th in their division, though there are still a couple of teams in the top 12 of Division 4 that must win on Friday to get the four wins needed in their overall season records to make playoffs.

The St. Mary’s Rams (7-2, 4-0 Tri-City Athletic League) took a 36-0 first-quarter lead over the West High Wolf Pack (1-7, 0-4 TCAL) on Friday at Steve Lopez Stadium, and continued scoring to give the Rams the 71-0 win. The Rams covered 316 yards rushing and 81 yards passing, with nine rushing touchdowns and one touchdown pass.

The Rams share first place in the TCAL with Lincoln High of Stockton, and they play each other on Friday at Lincoln High to determine the league champion.