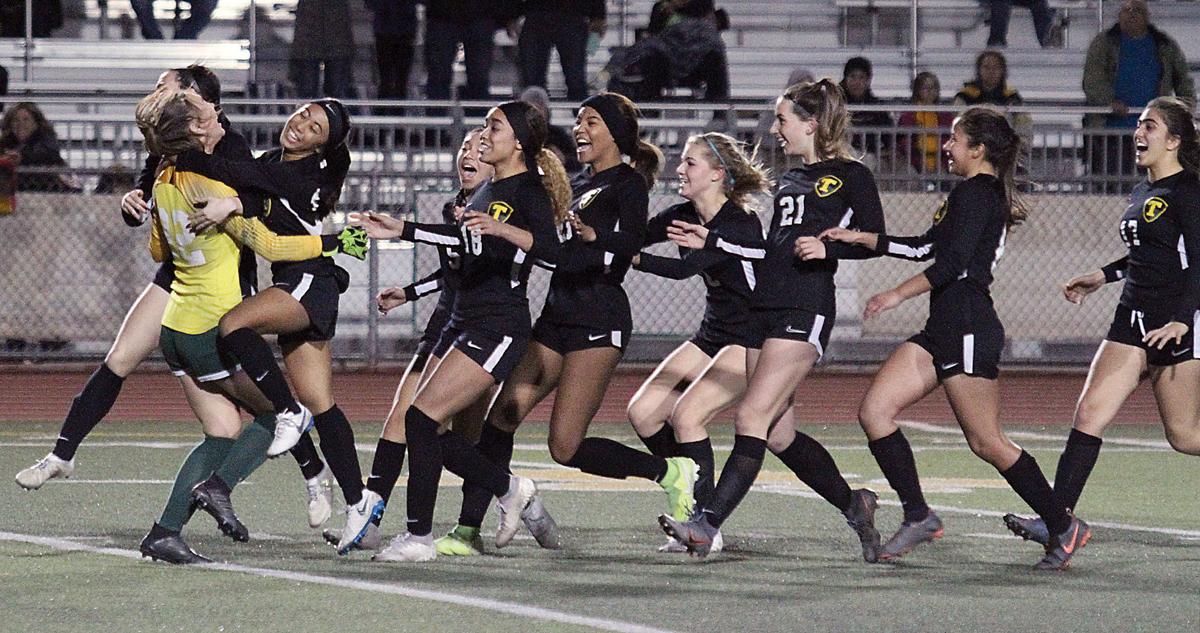 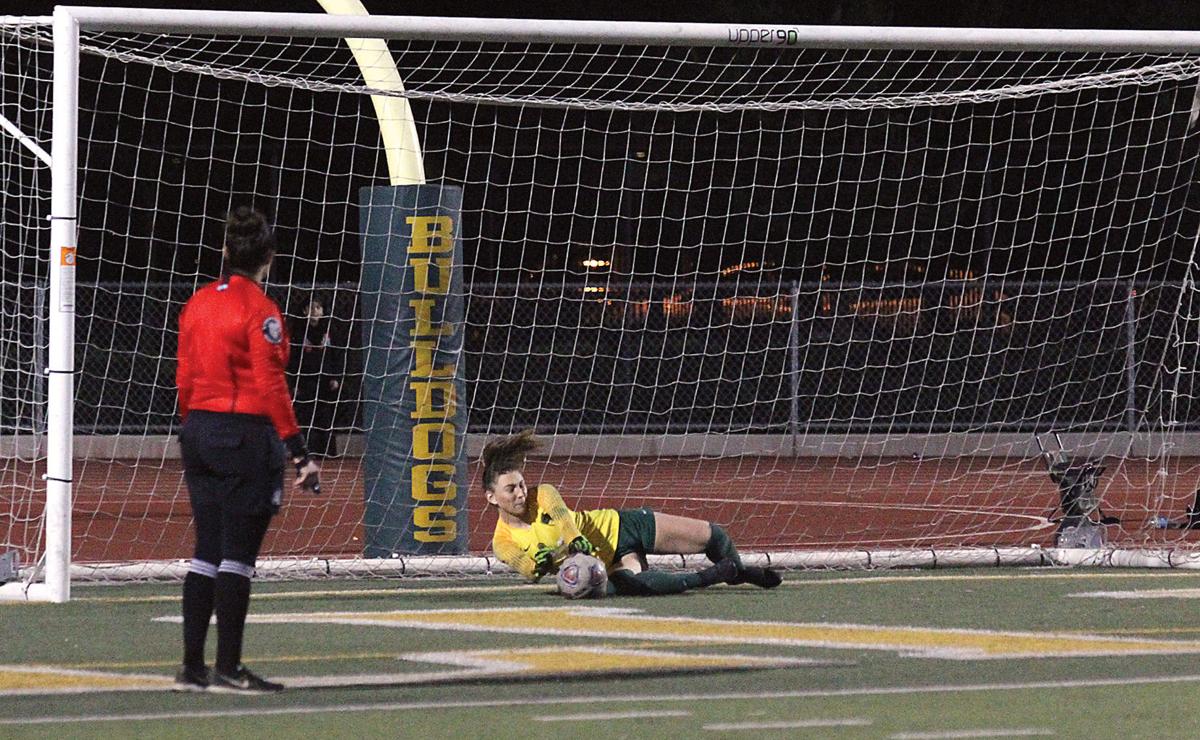 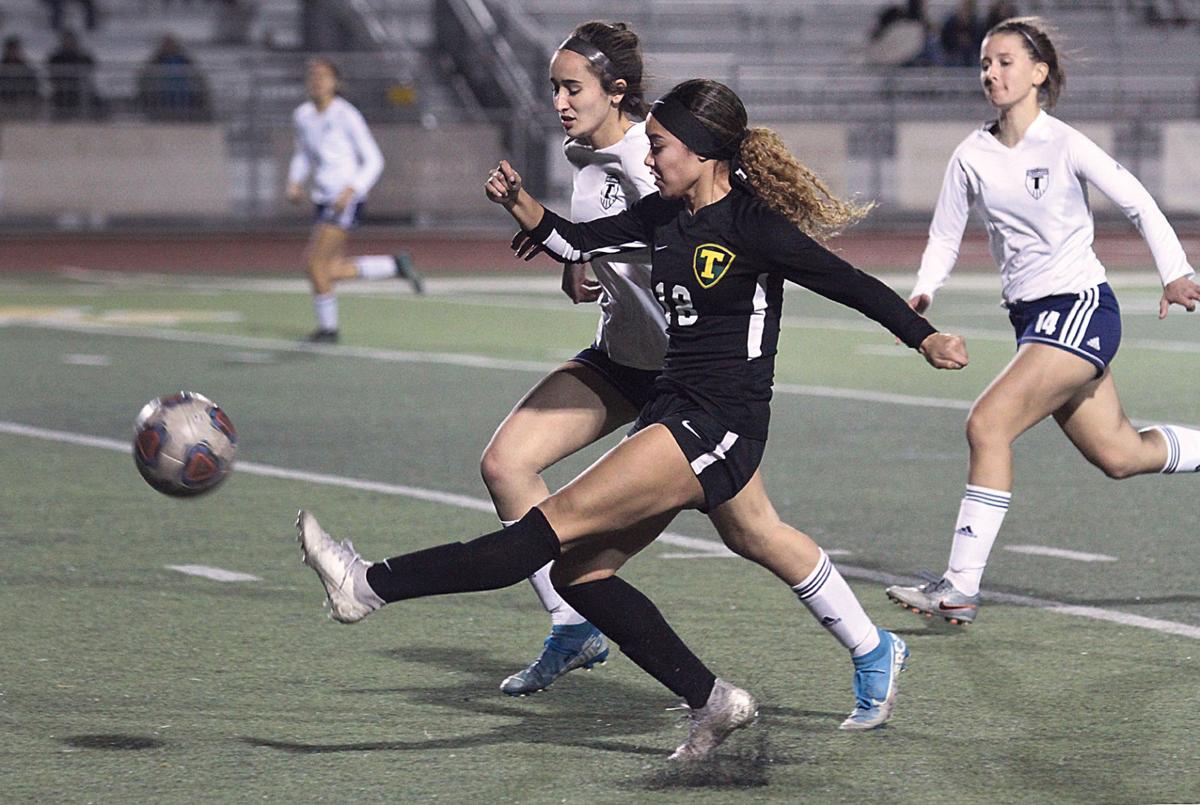 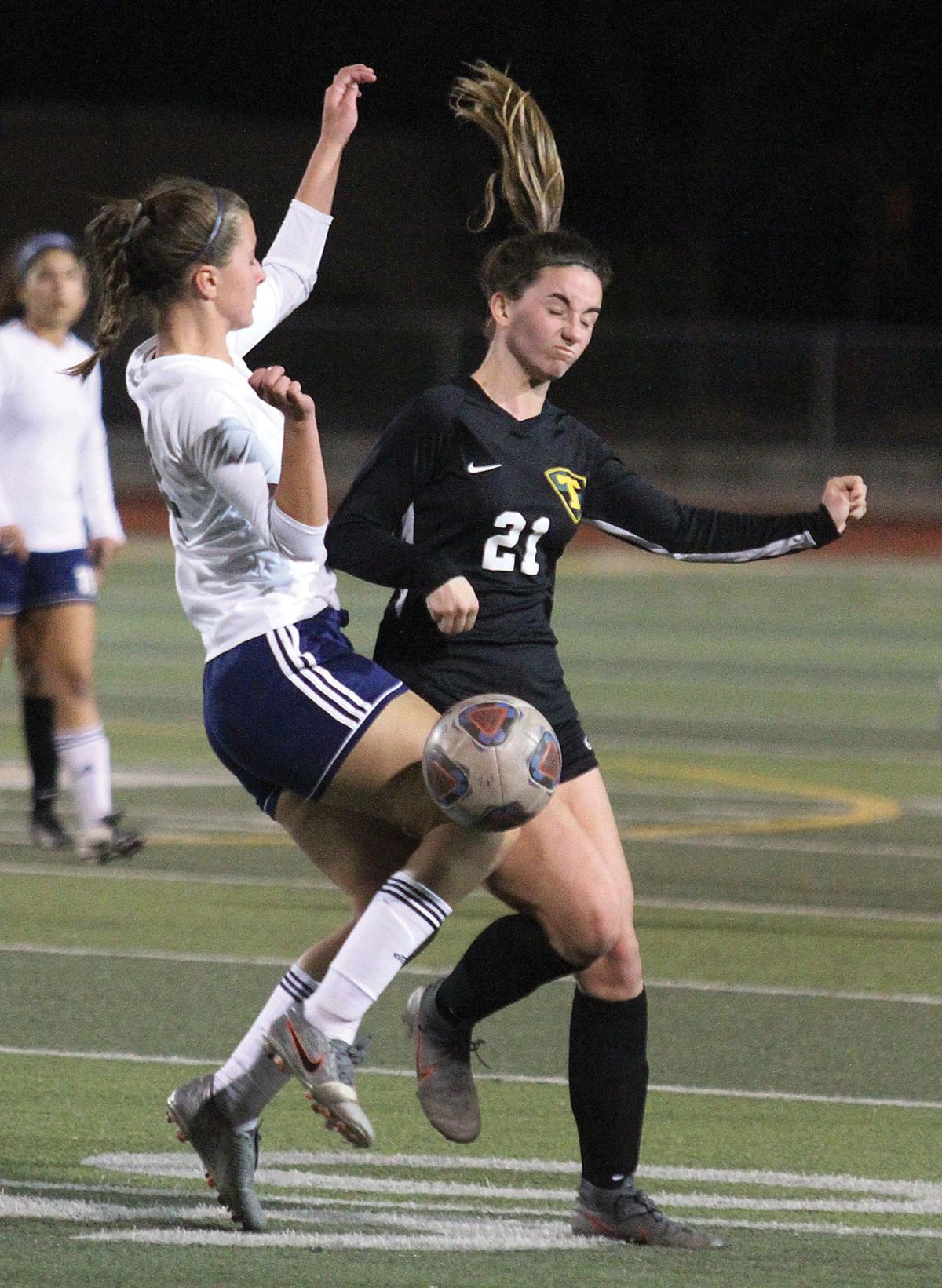 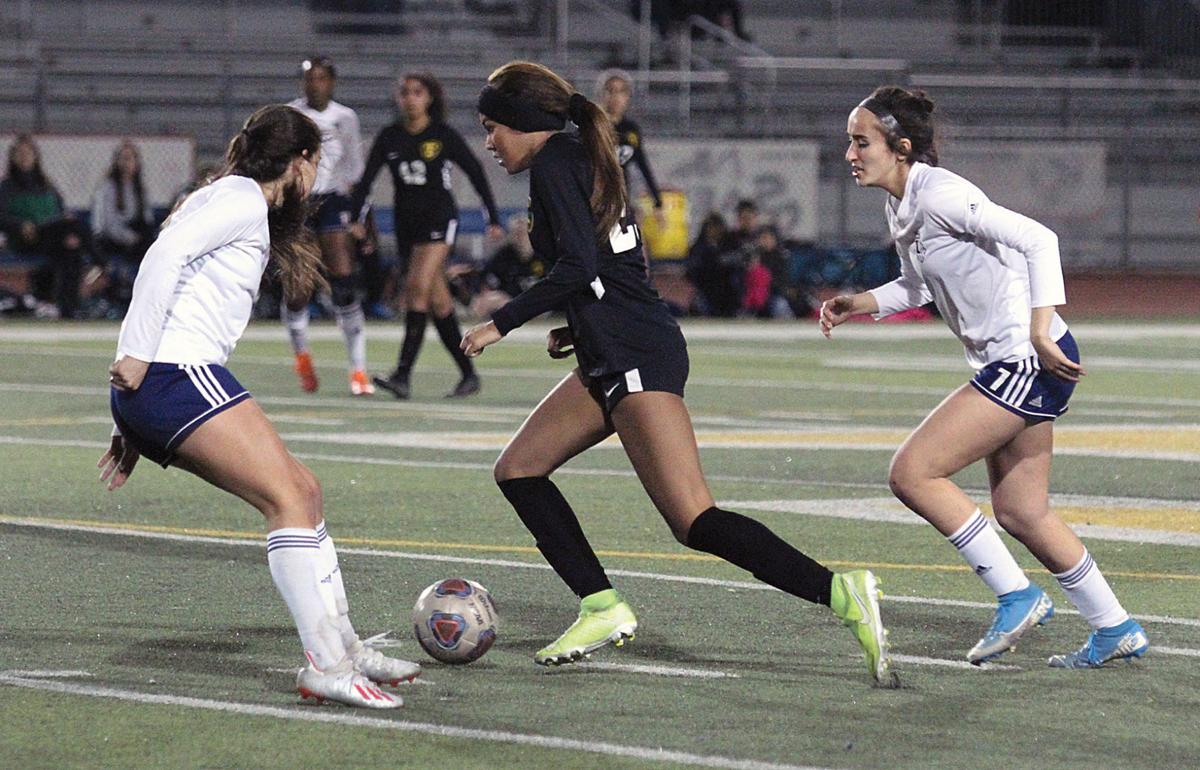 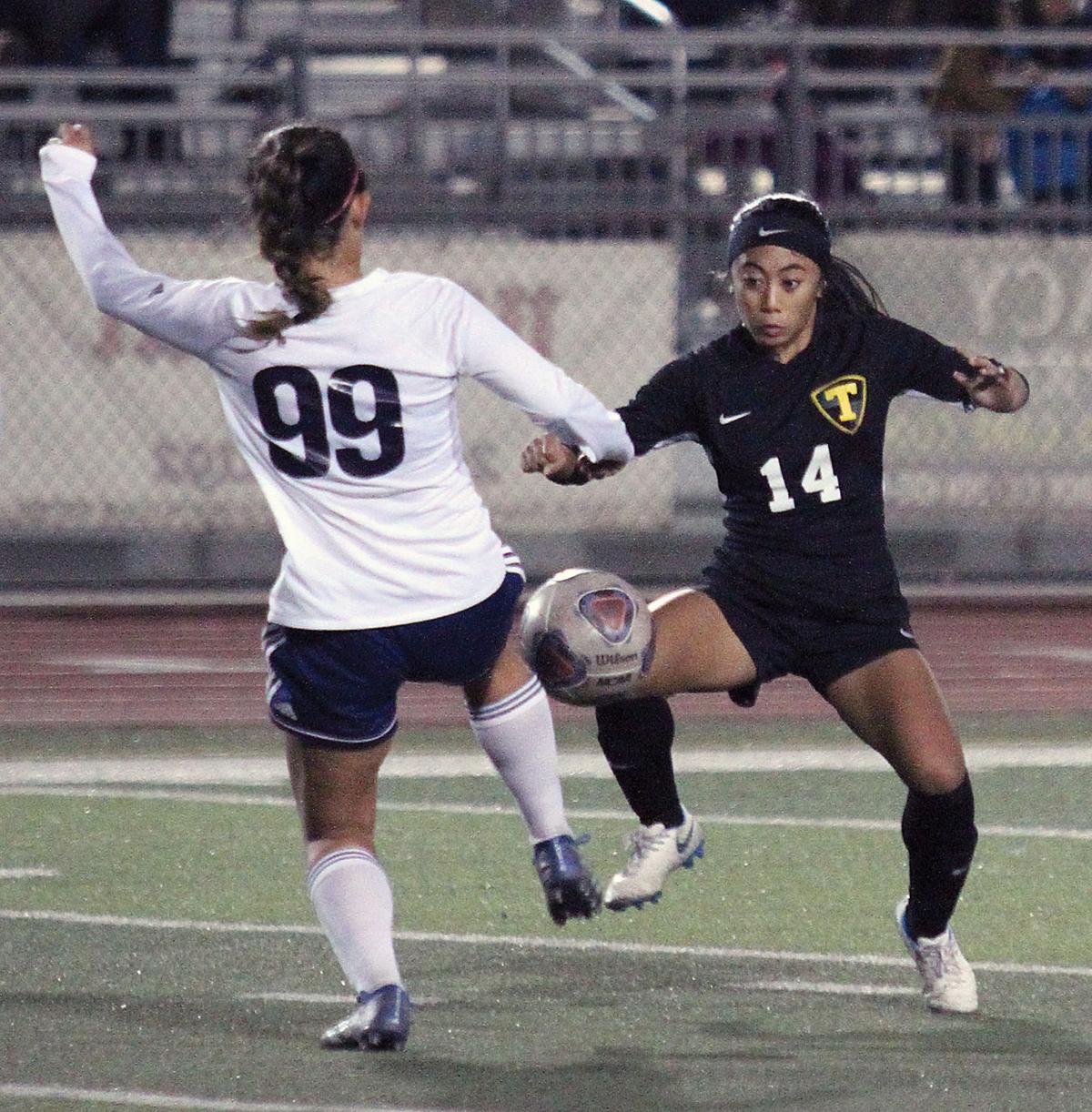 The Tracy High sophomore Ashleigh Garcia (right) works to get control of the ball during Friday’s quarterfinal playoff game at Wayne Schneider Stadium. 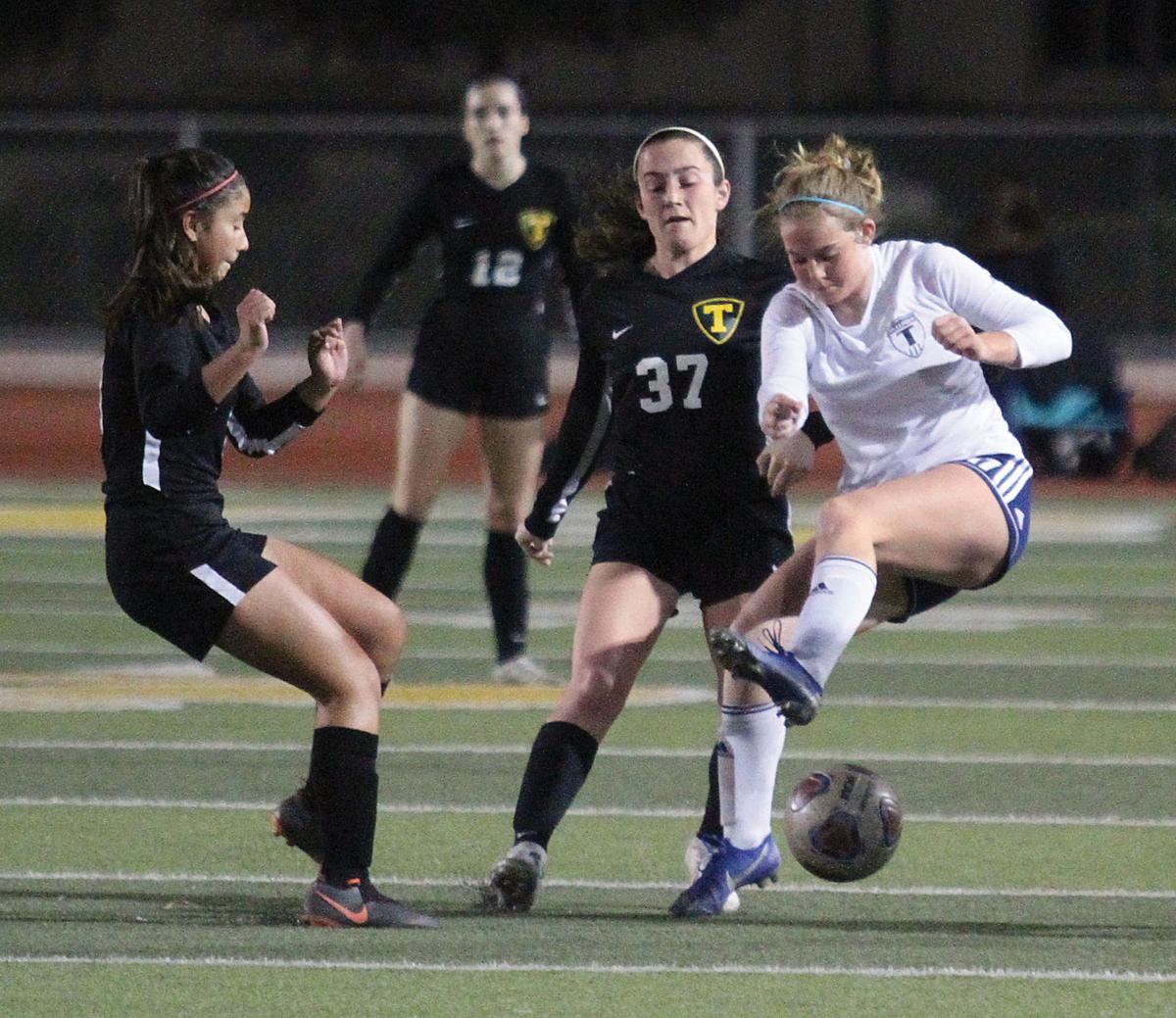 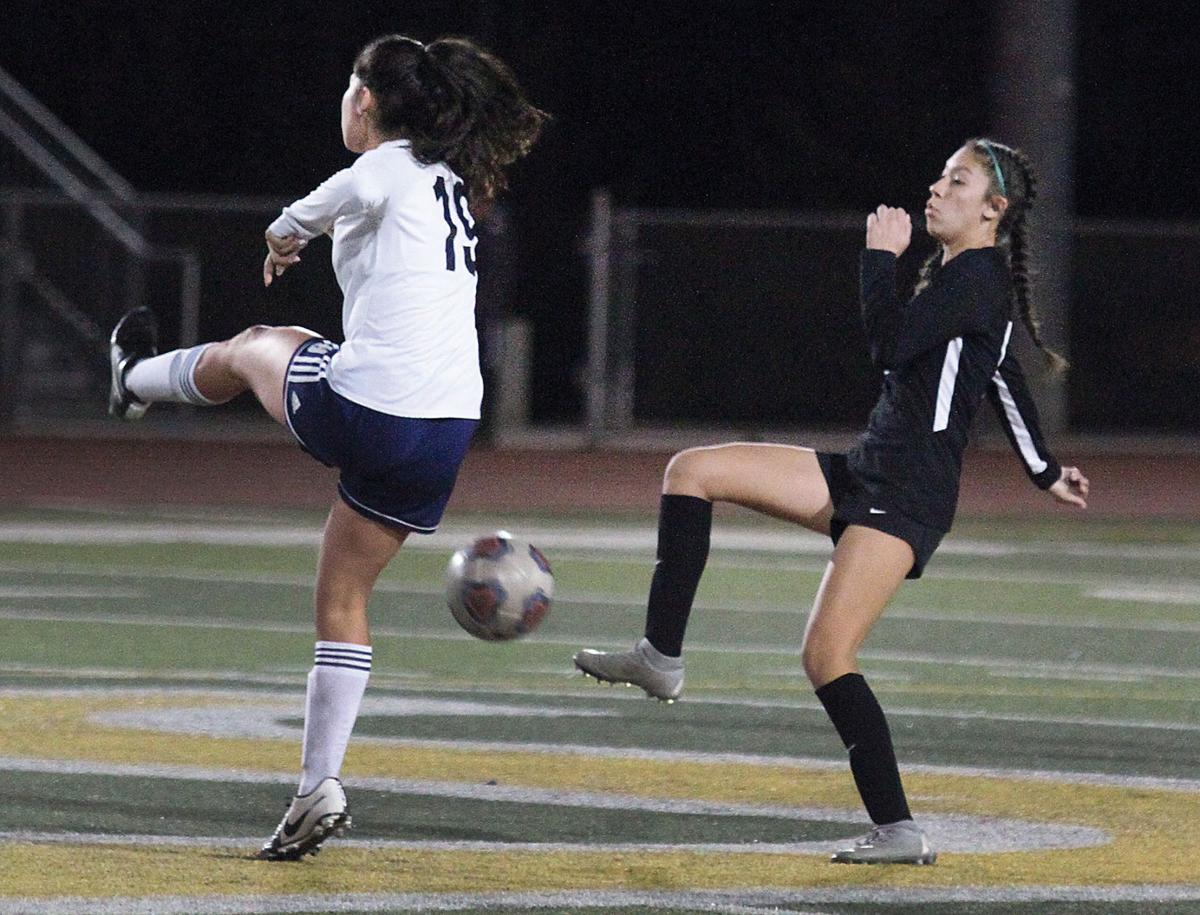 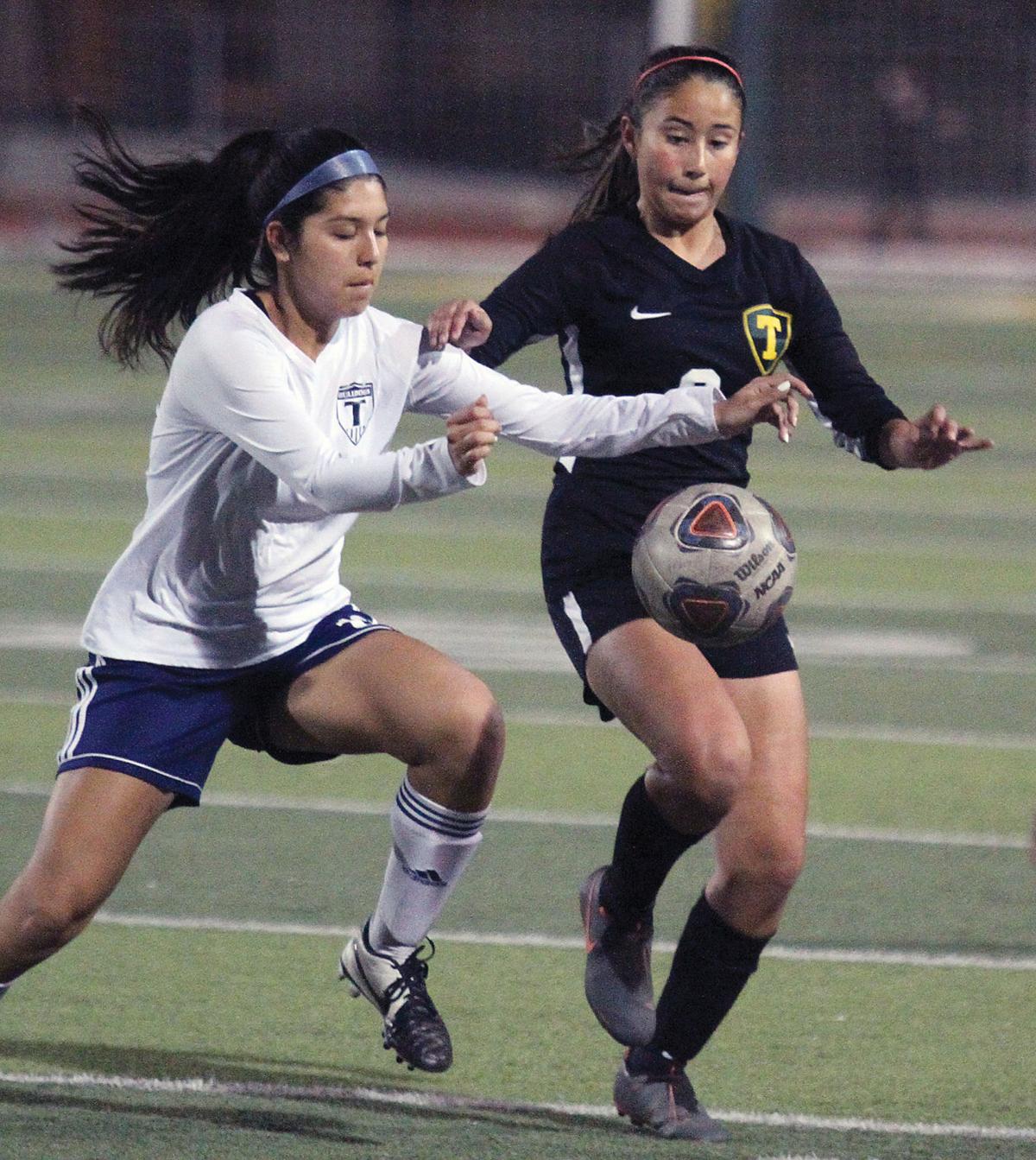 Tracy High freshman Savannah Cordero (right) fights for the ball near the sideline during a quarterfinal playoff game Friday at Wayne Schneider Stadium. 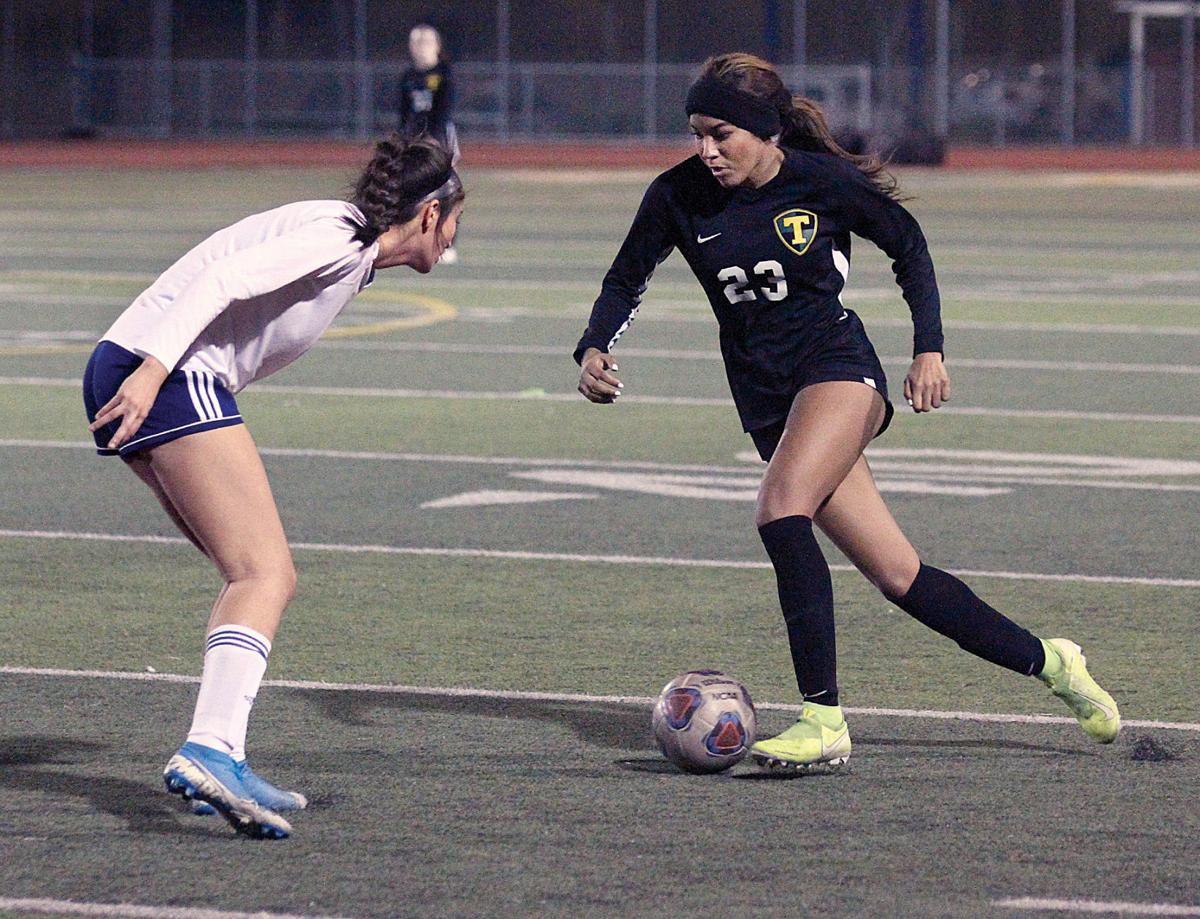 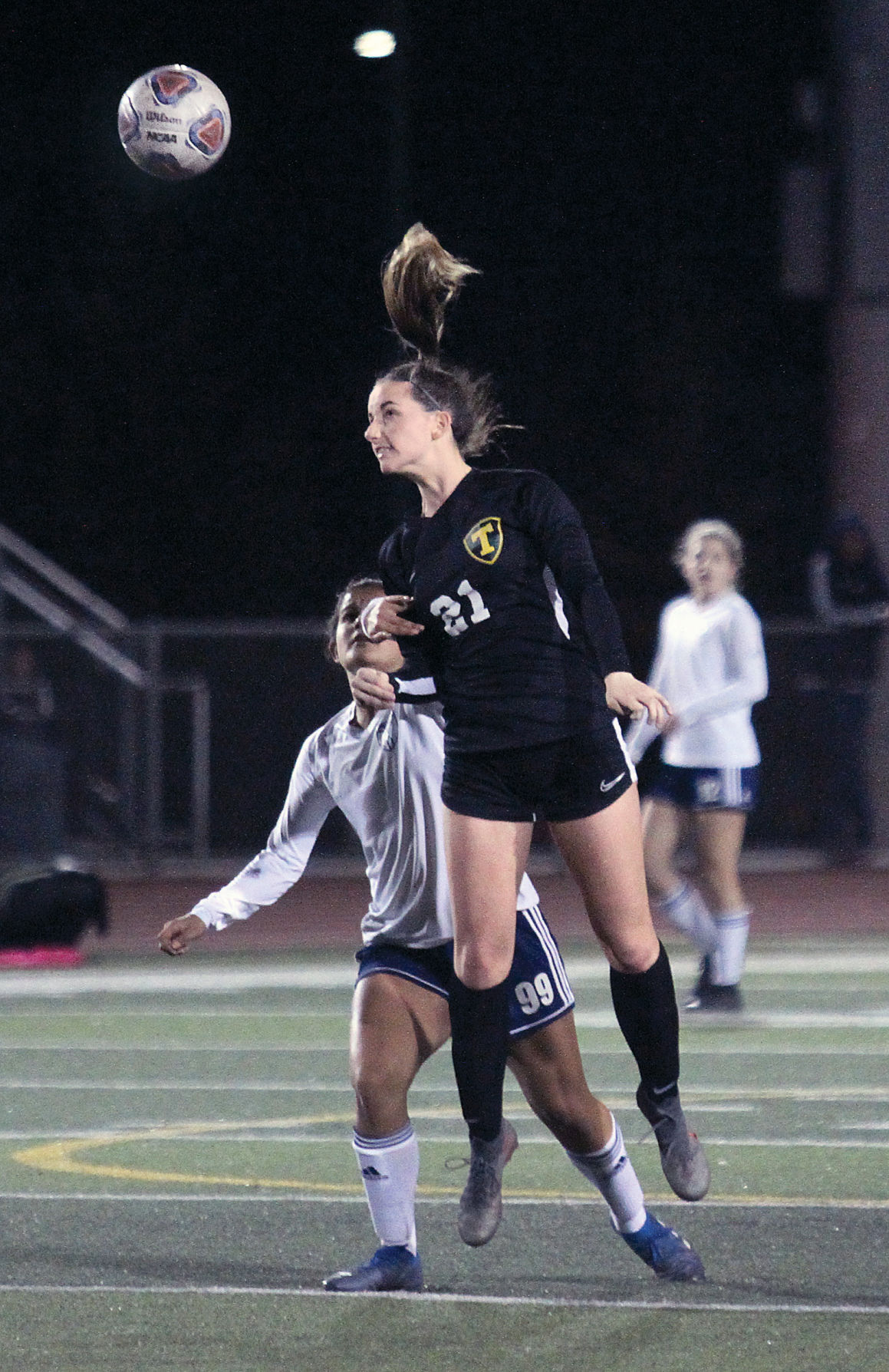 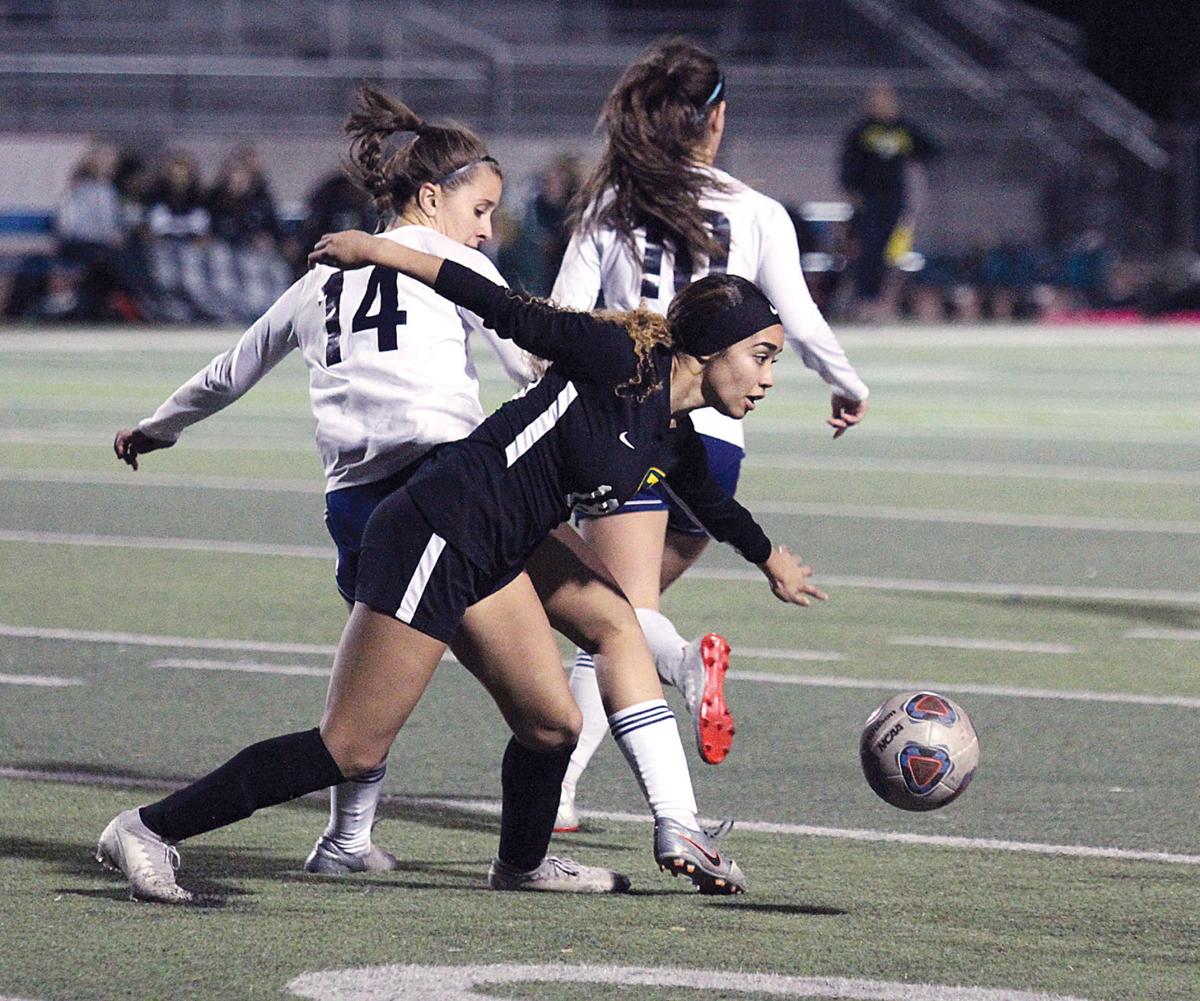 The Tracy High sophomore Ashleigh Garcia (right) works to get control of the ball during Friday’s quarterfinal playoff game at Wayne Schneider Stadium.

Tracy High freshman Savannah Cordero (right) fights for the ball near the sideline during a quarterfinal playoff game Friday at Wayne Schneider Stadium.

When the pressure was on, the Tracy High girls soccer team kept on playing the game the Bulldogs know they’re capable of.

They had to score twice late in the second half to keep their game against the Turlock Bulldogs tied, and then they had to make clean shots in the penalty kick round to come away with the win in the quarterfinals of the Sac-Joaquin Section Division 1 playoffs.

Tracy junior goalkeeper Maddi Mannina said that even though she’s confident she can block those precisely aimed shots, she still feels the stress of having all eyes upon her when the game comes down to a round of penalty kicks.

“It was horrifying. It’s so close,” she said. “You have to be on it and focused. If you lose focus, you’re done.”

In the end, Tracy made three shots in the shootout, while Turlock missed two and Mannina blocked the other.

The shootout ended a game that saw both teams making persistent offensive charges against defenders who were quick to get in position and swarm over the attackers, and when the goals came together, they happened fast.

After the teams went back and forth at the start, the Tracy Bulldogs (16-1-1, 8-1-1 Tri-City Athletic League) scored the first goal in the eighth minute. Senior Jaden Hall, along with junior Trinity Sandridge and sophomore Bailey Gualco, put pressure on the Turlock goal, and when Hall got the ball on the left side she sent a quick cross to sophomore midfielder Ashleigh Garcia in the middle, and Garcia fired the ball into the upper left corner of the goal.

Tracy’s lead held until the 24th minute, when Turlock (15-6-2, 8-2-0 Central California Athletic League) launched a throw-in to the front of the goal and kicked it in the net. The 1-1 tie held into the second half, with Tracy junior defenders Taylor Perry and Leela Amin turning back Turlock’s attacks.

Turlock scored four minutes later, with a shot up the middle that bounced into the right side.

Tracy’s next attack brought the ball to the back line on the left side, where Hall outmaneuvered a growing crowd of defenders and saw the chance to place the ball right in front of the goal.

“I just took the opportunity to beat my defender, because I knew I could beat her, and I took the ball around to the corner and crossed it in, and they were there to finish it,” Hall said.

Garcia was among the Tracy players trying to get in position for a shot. She expected the opportunity to score would be there as soon as Hall got the ball clear.

“Jaden had been dribbling on the other side and when she had put it in there was a crowd of players trying to battle for the ball,” Garcia said. “I knew I had to keep fighting, so I got in and I slid and I kicked the ball to the back of the net and it was so exciting.”

Both teams continued to create opportunities to take shots in the closing minutes of regulation play. Turlock got a corner kick but overshot the goal. Tracy junior Ciara Lucas sent a long arcing shot at the Turlock goal, but the goalie blocked it. A Turlock free kick at the goal went wide right, and Mannina blocked another shot, her sixth blocked shot of regulation play.

After two 10-minute overtime periods the game would be decided on the penalty kick shootout. Tracy had the first shot, and junior Mysha Mamsa put the ball in the right side of the goal. Turlock’s first shot bounced off the right post. Hall then fired a shot into the left side, and Turlock’s next player fired the ball at the left side and Mannina made a diving catch. Gualco sent her shot into the left side of the net, and Turlock’s next shot went over the crossbar, ending the match.

Tracy Coach Nate Perry said that once teams get to playoffs he emphasizes the importance of making clean shots at the goal just in case the game does go to penalty kicks.

“They practiced them hard. They took them serious in practice and that showed tonight,” Perry said. “Our girls were up to the task tonight: Mentally prepared and I’m proud of them.”

He also told them to take a moment to consider how far their team has gone this year. It’s the third year in a row that Tracy has won the Tri-City Athletic League title, and the Tracy girls have been in playoffs in 13 of 14 years since 2007. This is the second time they’ve advanced as far as semifinals in that time but that was in the Division 2 bracket, where they’ve played in six of the past seven years.

“This the furthest we’ve gone in Division 1 playoffs so obviously it means a lot to us,” Hall said. “Going forward we’re just going to keep working hard and doing what we need to do to make it further.”

Tracy will host Oak Ridge High (15-2-1, 8-1-1 Sierra Foothill League) of El Dorado Hills at 6 p.m. on Tuesday for the SJS Division 1 semifinals. The winner of that game will advance to next Saturday’s championship game against River City or Folsom, and will also qualify for the California Interscholastic Federation NorCal Regional Championship tournament.

The Kimball Jaguars were eliminated from the SJS Division 3 playoffs on a last-minute goal from the El Capitan Gauchos in Merced on Friday.

The Jaguars (14-9-2, 7-3-2 Valley Oak League) scored in the ninth minute when sophomore Mariya Hinojosa made a long run with the ball from midfield, passed to sophomore Charlize Castro, who passed to senior Danya Gonzalez. Gonzalez passed to Hinojosa, who passed back to Gonzalez, who made the shot.

El Capitan (16-5-2, 9-2-1 Central California Conference) scored next on a free kick in the 16th minute, and then scored again a minute later on a corner kick to take a 2-1 lead at the half.

Kimball tied it up in the 69th minute after senior Fayth Hinojosa crossed a corner kick to sophomore Elissa Giuliacci, who back-heeled the ball into the goal.