Starting at
$52.00 for 365 days
Get Started
View all rates
You are the owner of this article.
Edit Article Add New Article
Welcome, Guest
News
Voice
Our Town
Sports
Datebook
Obituaries
Advertising
Classifieds
Special Sections
1 of 10 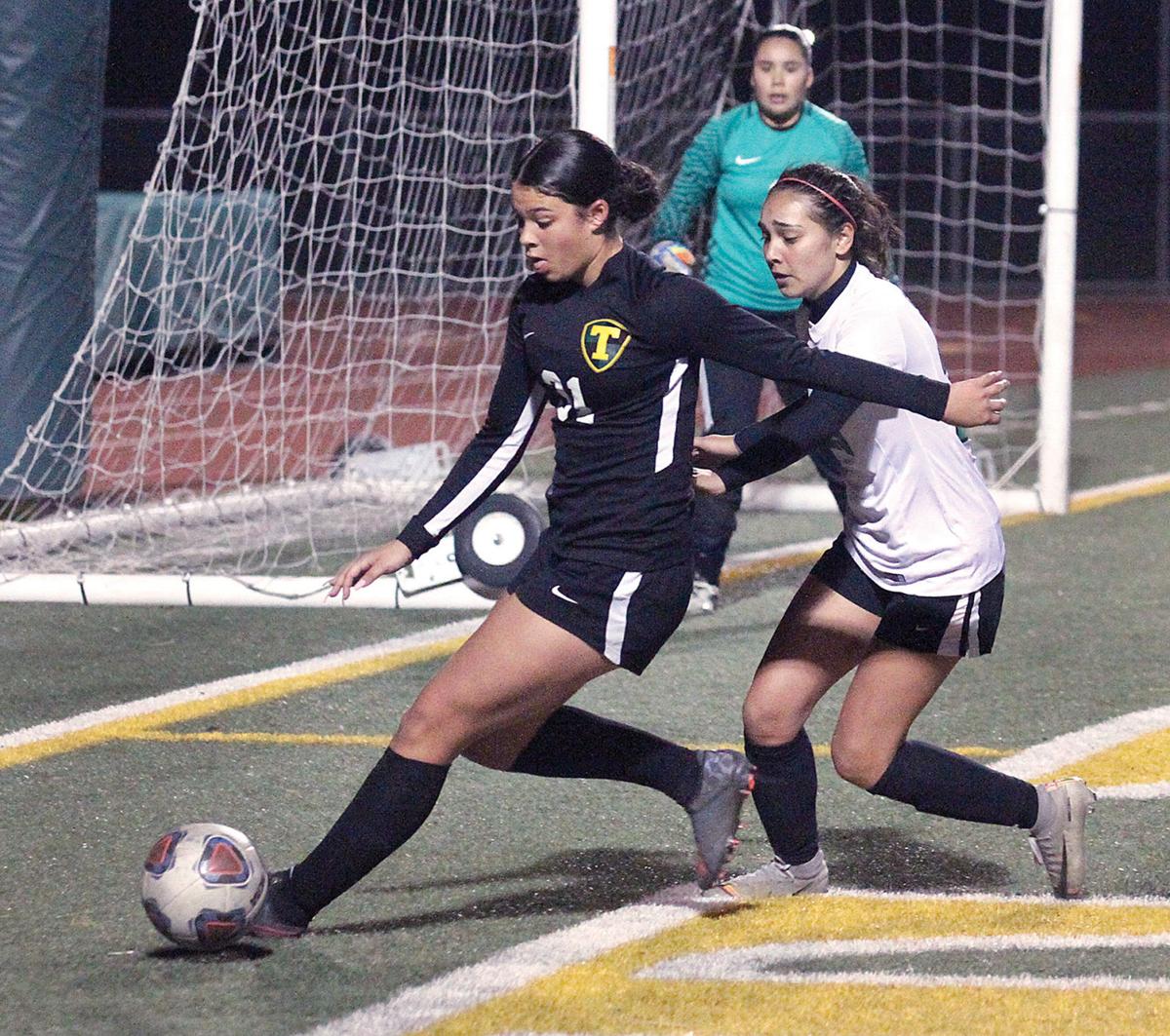 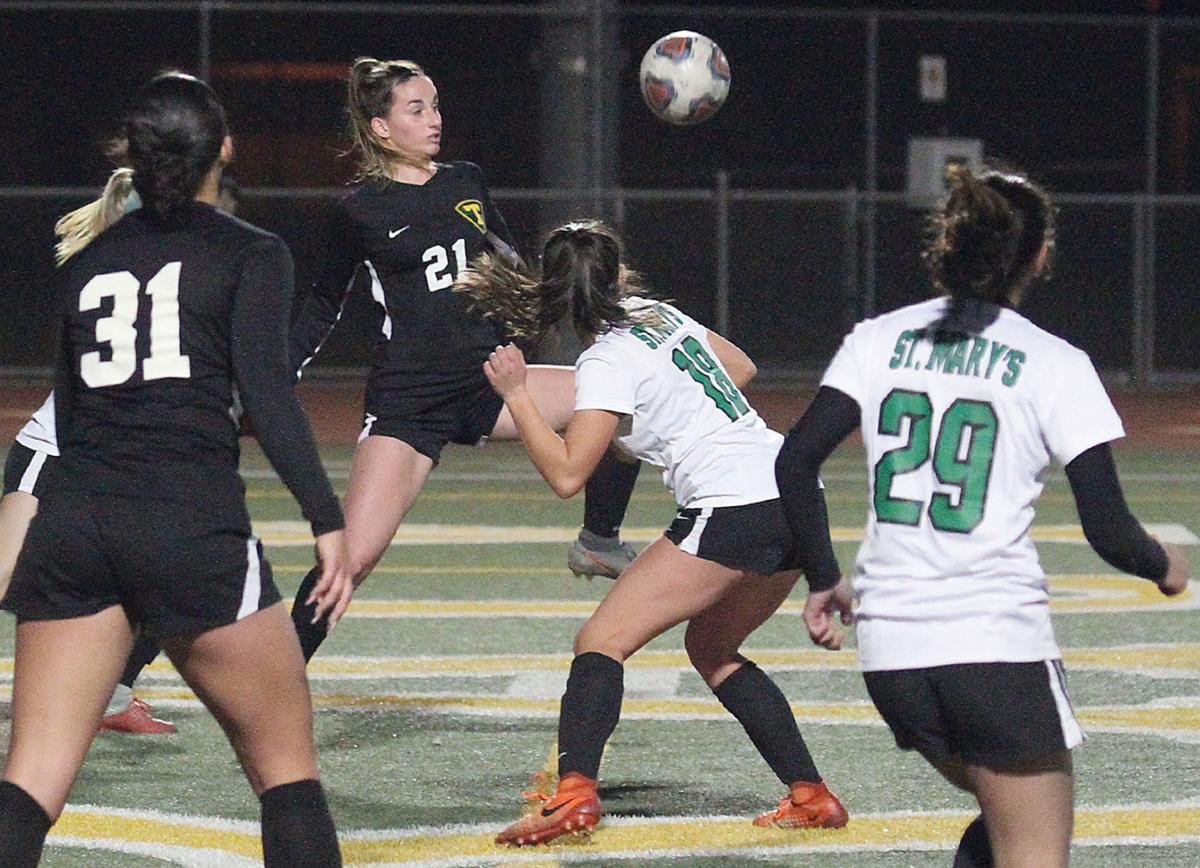 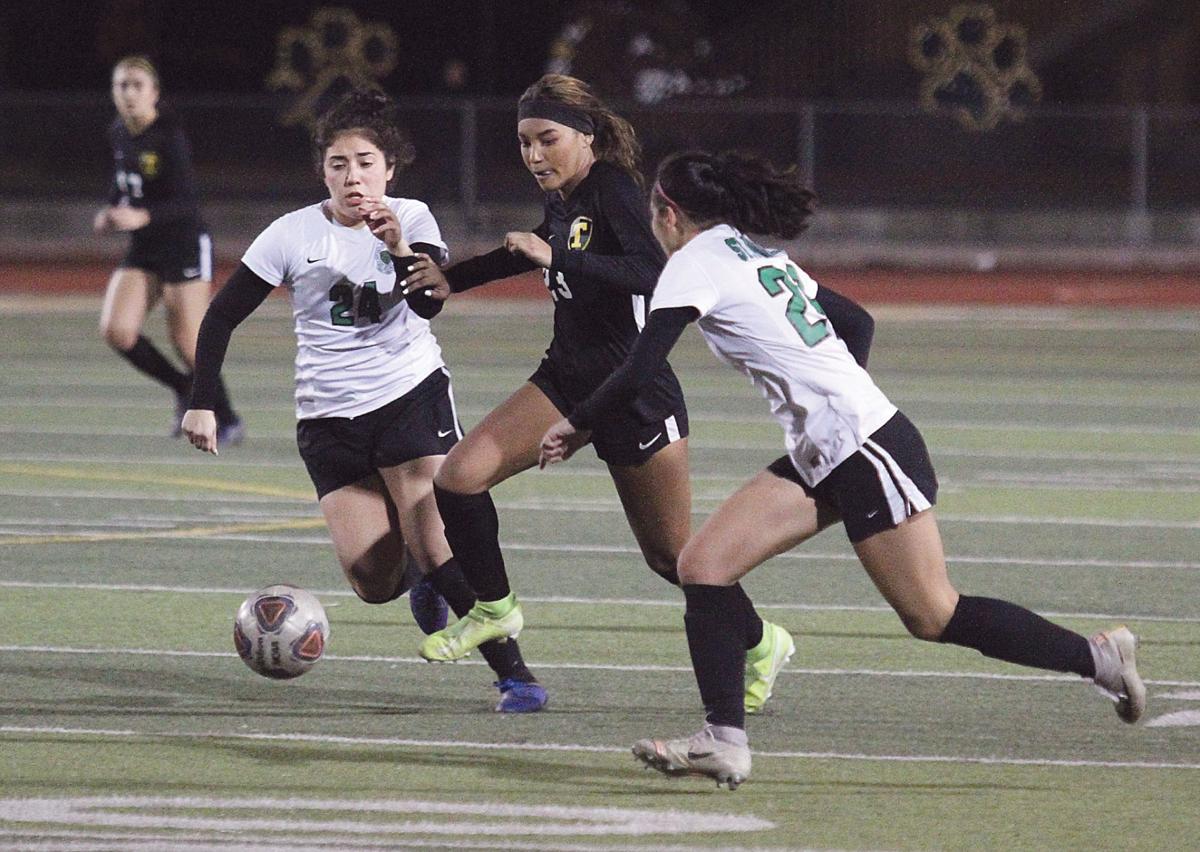 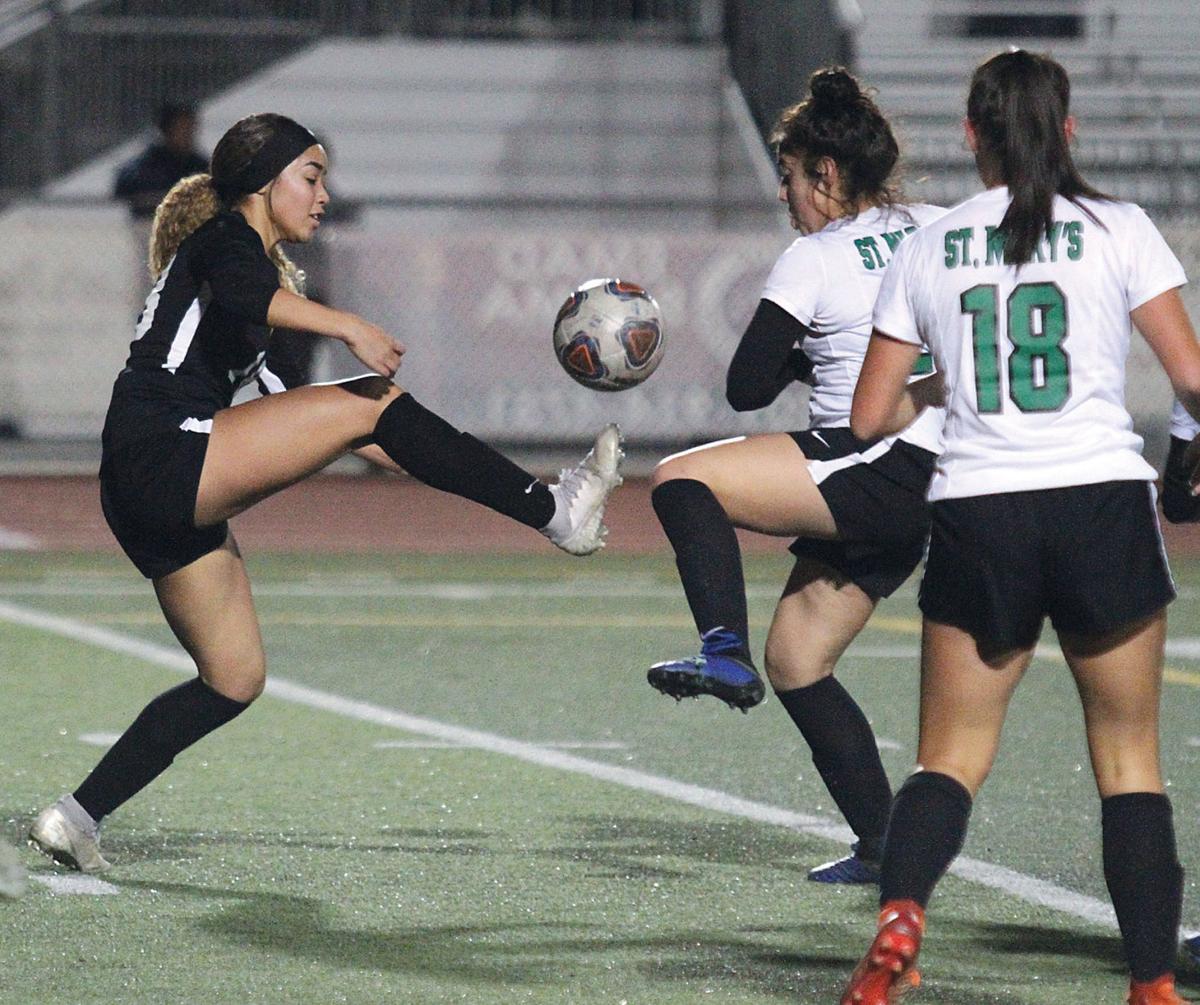 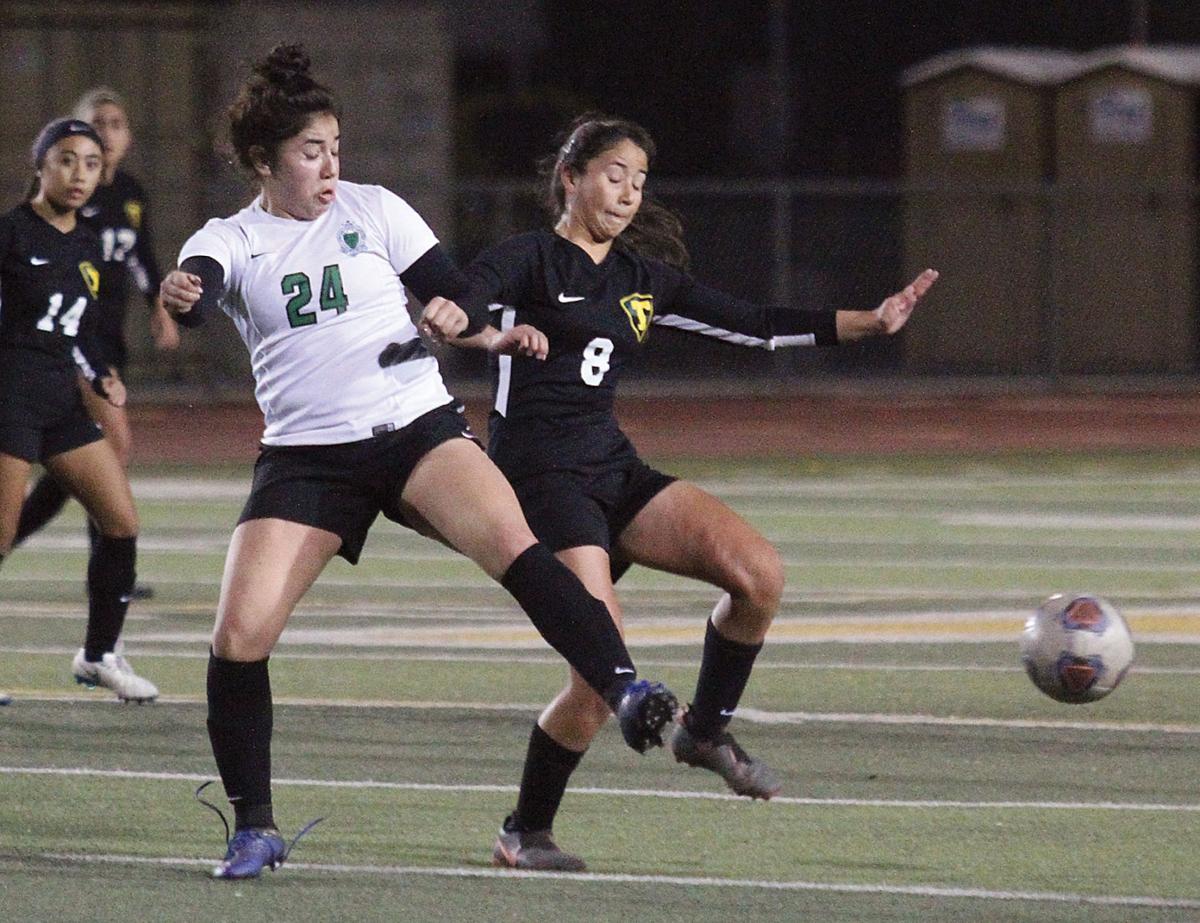 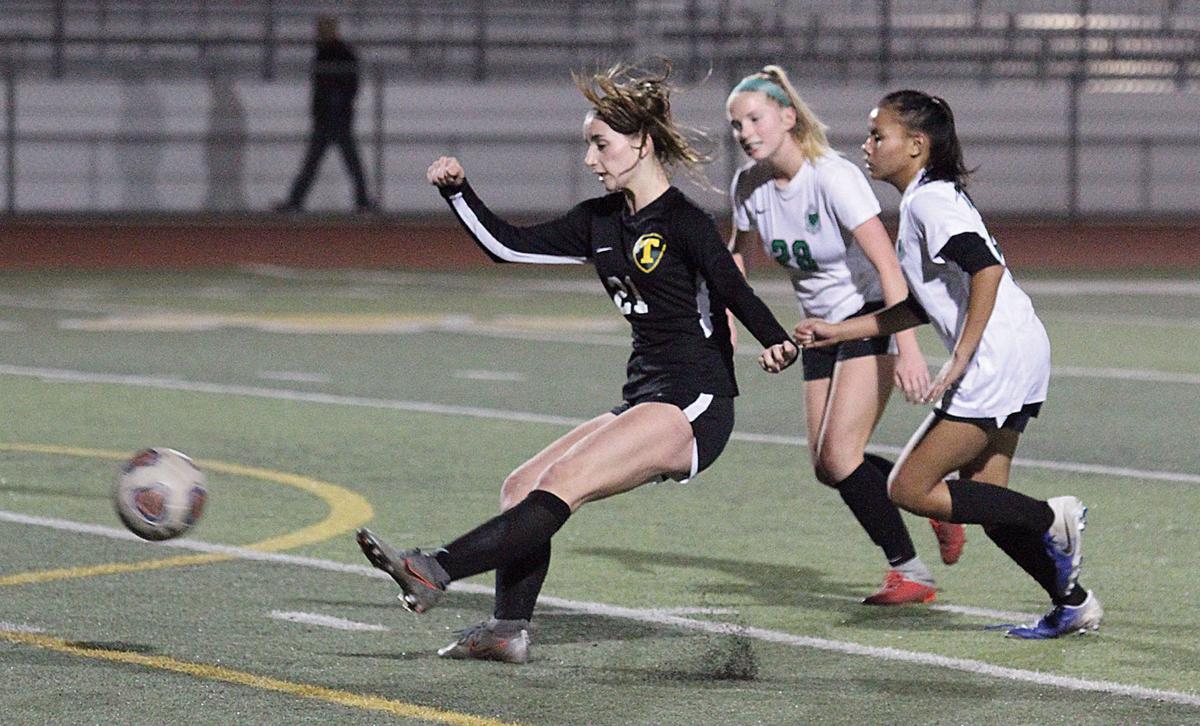 Tracy High sophomore Bailey Gualco (left) fires a shot that would bounce off the crossbar during Tuesday’s game against St. Mary’s High at Wayne Schneider Stadium. 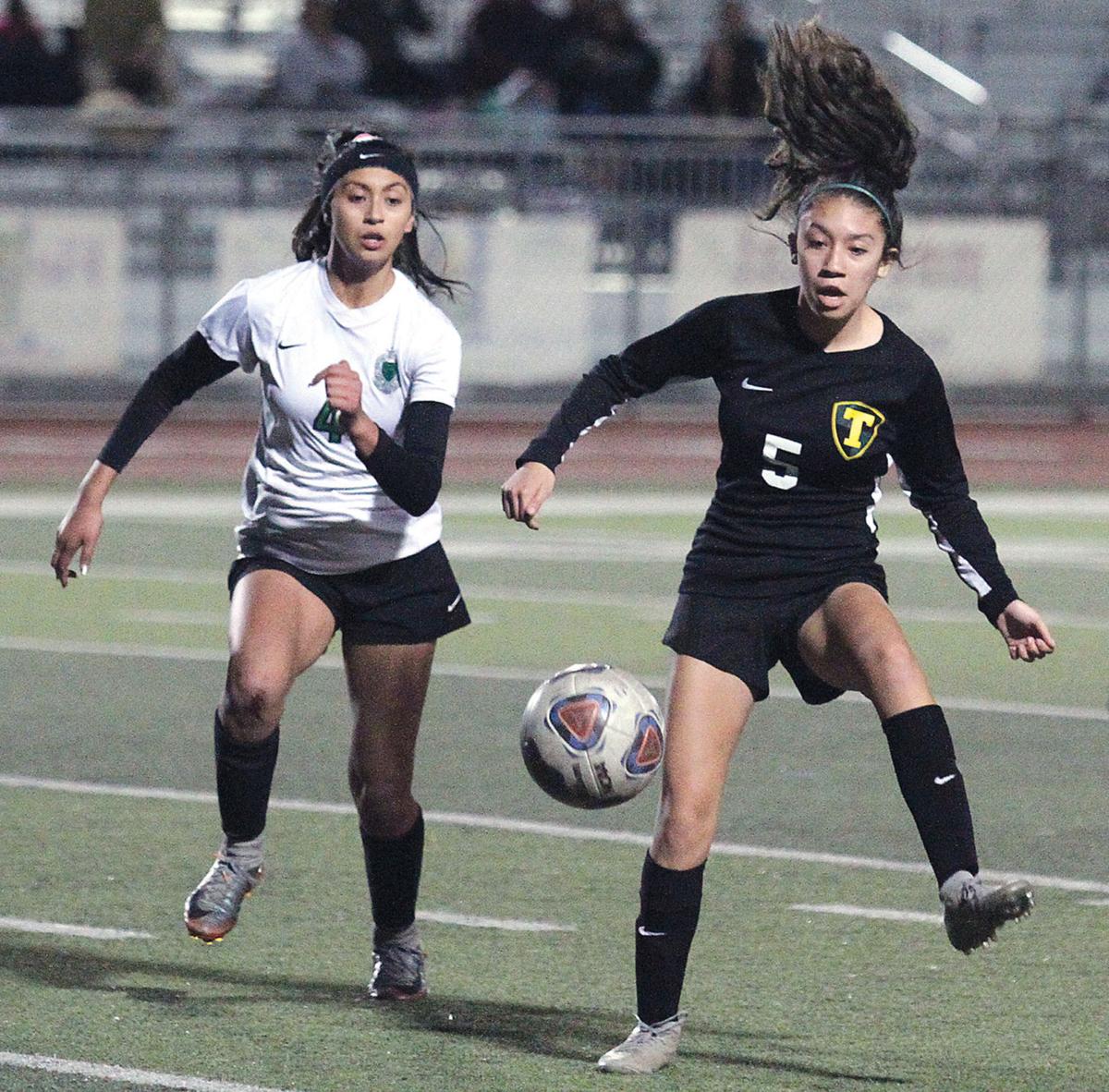 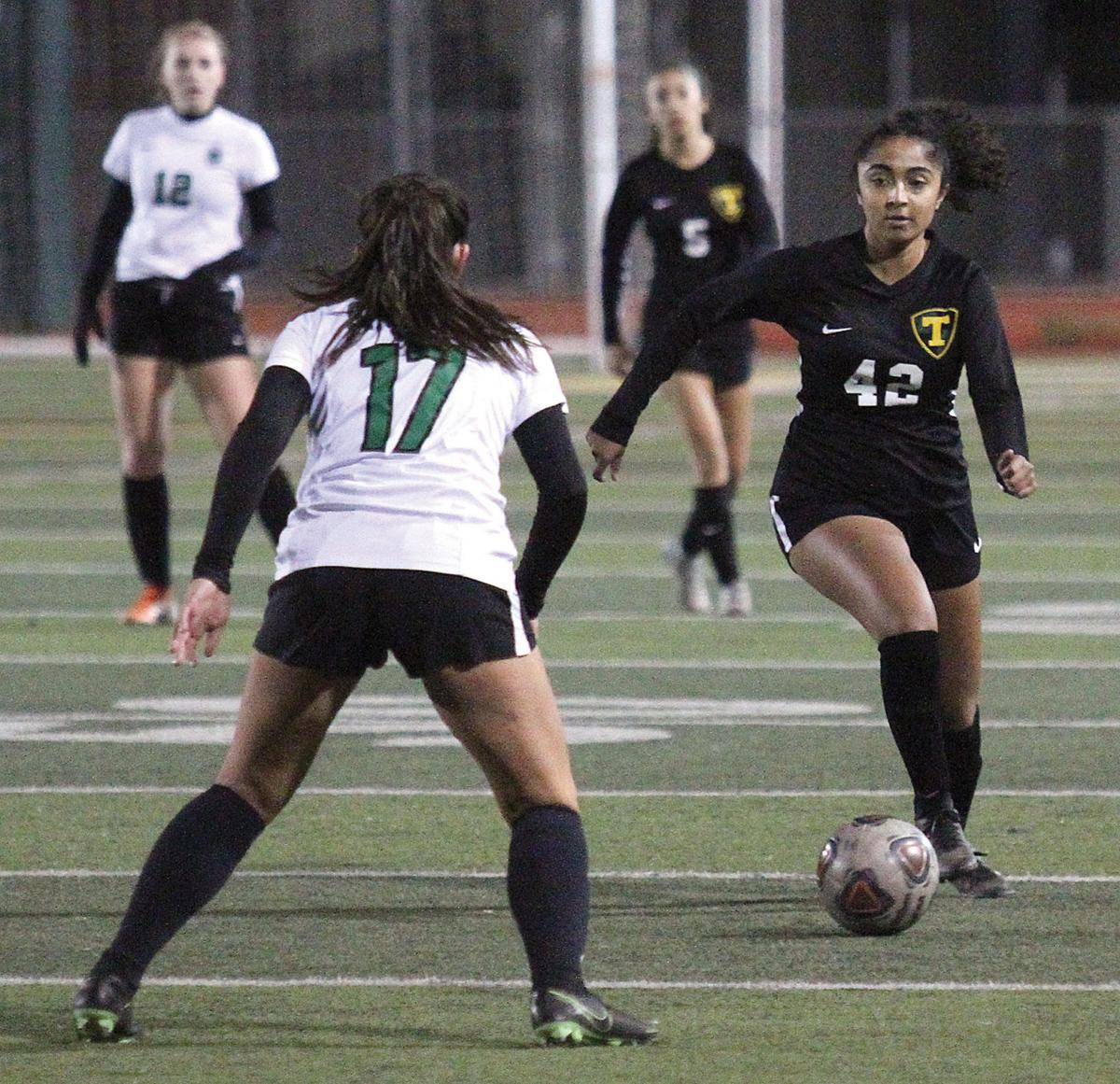 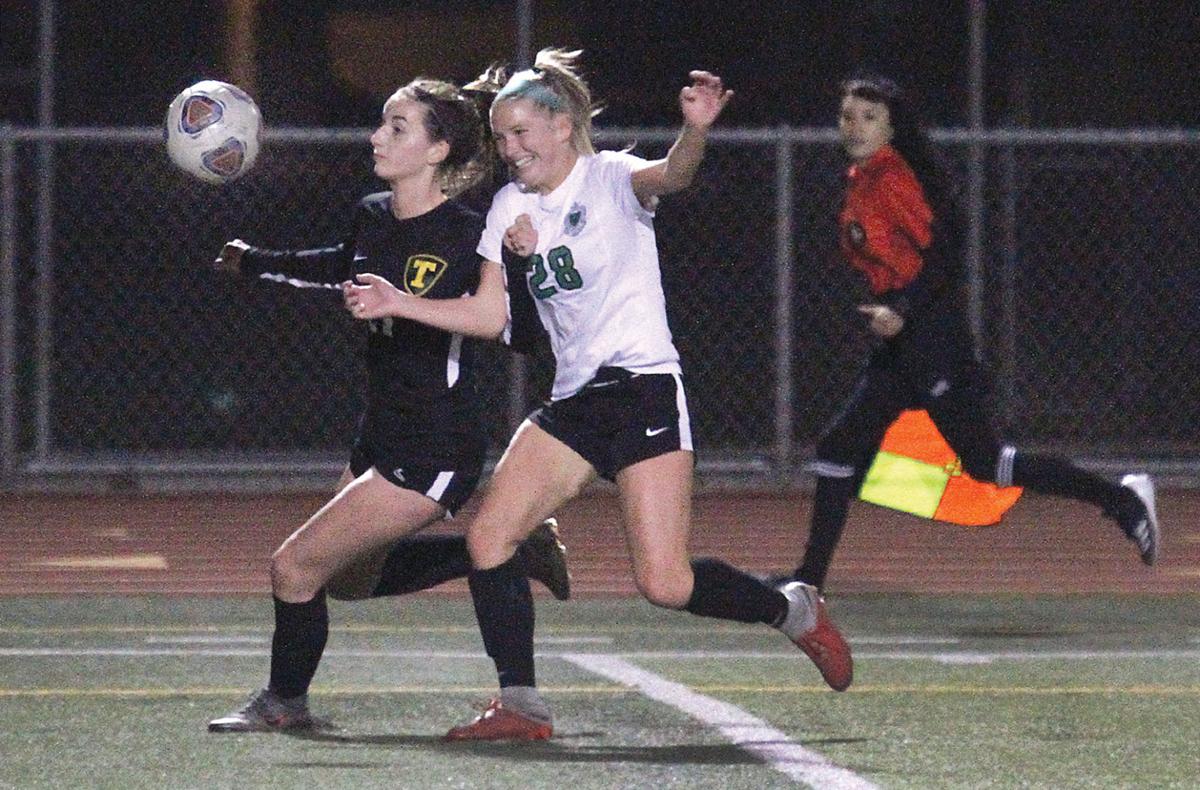 Tracy High sophomore Bailey Gualco (left) fights her way past a St. Mary’s player on the way to the goal Tuesday night at Wayne Schneider Stadium.

Tracy High sophomore Bailey Gualco (left) fires a shot that would bounce off the crossbar during Tuesday’s game against St. Mary’s High at Wayne Schneider Stadium.

Tracy High sophomore Bailey Gualco (left) fights her way past a St. Mary’s player on the way to the goal Tuesday night at Wayne Schneider Stadium.

The Tracy High girls won their third consecutive Tri-City Athletic League title on Tuesday, beating their main competitor, St. Mary’s of Stockton, 3-1 to take the top spot in the league.

“It’s really stressful, especially because it’s our senior night. It means a lot more to me and Meridith,” Hall said.

She’s been on the team for four years, and last year the TCAL title also came down to the final league game. Players went into the game knowing that St. Mary’s would be tough to beat.

“I know a lot of the girls on the (St. Mary’s) team because a lot of them are friends,” Tracy junior Trinity Sandridge said. “I just needed to dominate where I could and be productive with what I had, so I know that our formation came in key and man-marking was important, and for us to manipulate off the ball was really important for us.”

She added that ultimately the players compete for each other.

“I’m a junior, so it’s my third time winning (the TCAL title), and it means a lot, especially with these seniors. They mean a lot to us and they’ve been around with us for a long time. Me and Jaden used to play together when we were younger, so it’s really nice to know they’re leaving on a good note.”

Tracy started off with repeated attacks on the St. Mary’s goal, and the Bulldogs scored in the 13th minute when Sandridge took a corner kick from the right side and placed the ball right in front of the goal, where sophomore Ashleigh Garcia was in position to put it in with a header.

“Trin had gone up to take the corner kick, and (coach Nate Perry) and I had been talking about practicing my runs on corner kicks,” Garcia said. “I had backpedaled out of the space in the box, and when Trin, she drove the ball into the box and I jumped up and got contact, it went straight to the back corner and it was like the greatest moment ever.”

St. Mary’s scored in the final two minutes of the first half with a corner kick from the left that curved in to land at the right side of the goal, where a player was in position to knock it into the net.

Tracy took the lead back three minutes into the second half when Hall crossed the ball from the left to Sandridge, who was on the right side of the goal with a clear shot.

“Jaden played a really good ball. I was able to beat the defender and cut it in with my left,” Sandridge said. “I just took a shot that I knew I could hit and it rolled in the back corner.”

Hall scored Tracy’s third goal unassisted in the 57th minute when she maneuvered around the St. Mary’s defenders in front of the goal, got clear, and made a shot up the middle and into the goal.

Tracy kept up the pressure, and when St. Mary’s was able to attack, the Rams ran up against a quick Tracy defense. Hagler, junior Leela Amin, junior Taylor Perry and freshman M.J. Anzo all turned back St. Mary’s scoring attempts.

Enthusiasm for the victory was diminished when Tracy freshman forward Katie Strong went down with a possible knee injury in the final two minutes of the game. The game was stopped as coaches and her parents tended to her and carried her from the field.

The Mountain House High girls soccer team is finishing its best season yet, and even after a 5-0 loss to Western Athletic Conference leader Ceres on Monday in the final home game of the league season, the team is still looking forward to playoffs.

Senior striker Sophia Jimenez said the Mustangs have steadily improved in each of the four years she has been on the varsity team.

“This year, we’ve had a little more chemistry on the team, which made us play better. It all relies on chemistry and skill,” she said. “I just want everyone to have a good time. Playoffs is the main priority, but if we all put in the work, I knew we were going to get there, and we did that.”

Jimenez and senior Tara Freeborn are the Mustangs’ scoring leaders, and Freeborn said that everyone contributes.

“I think everyone individually is so strong, and when we’re working together, it creates this unity of girls,” she said. “I’ve played soccer since I was 4 or 6, so just seeing these girls out on the field makes me love soccer even more.”

The Mustangs underwent a midseason coaching change, with Eric Melena taking over for Paul Thompson as head coach right before the start of league play in mid-December.

“When I took over as head coach, I felt that we needed to make some changes,” Melena said. “Some players had skills where they could be better placed. We also had to change out our goalies. They worked together to improve themselves. That actually improved our chances of winning. I believe we have six shutouts on the season.”

On Monday, the Ceres team put persistent pressure on the Mustang goal, pushing past the Mountain House defense to score the first goal in the 14th minute.

Garcia, Freeborn and sophomore Eliza Williams led Mountain House’s attacks and Garcia got off a couple of shots, with one going wide and two more blocked by the Ceres goalie.

The Ceres team held a 1-0 lead at the half and scored two goals in quick succession in the 46th and 48th minutes, one in the 54th minute, and another on a long shot up the middle in the 77th minute.

The Bulldogs put together another decisive win Feb. 6 at Lodi High, keeping them in second place in the Tri-City Athletic League.

Strong scored two more goals in the second half, one unassisted and the other on a pass from freshman Savannah Cordero. Sandridge scored on a pass from sophomore Ashleigh Garcia, and Gualco scored another with an assist from Strong.