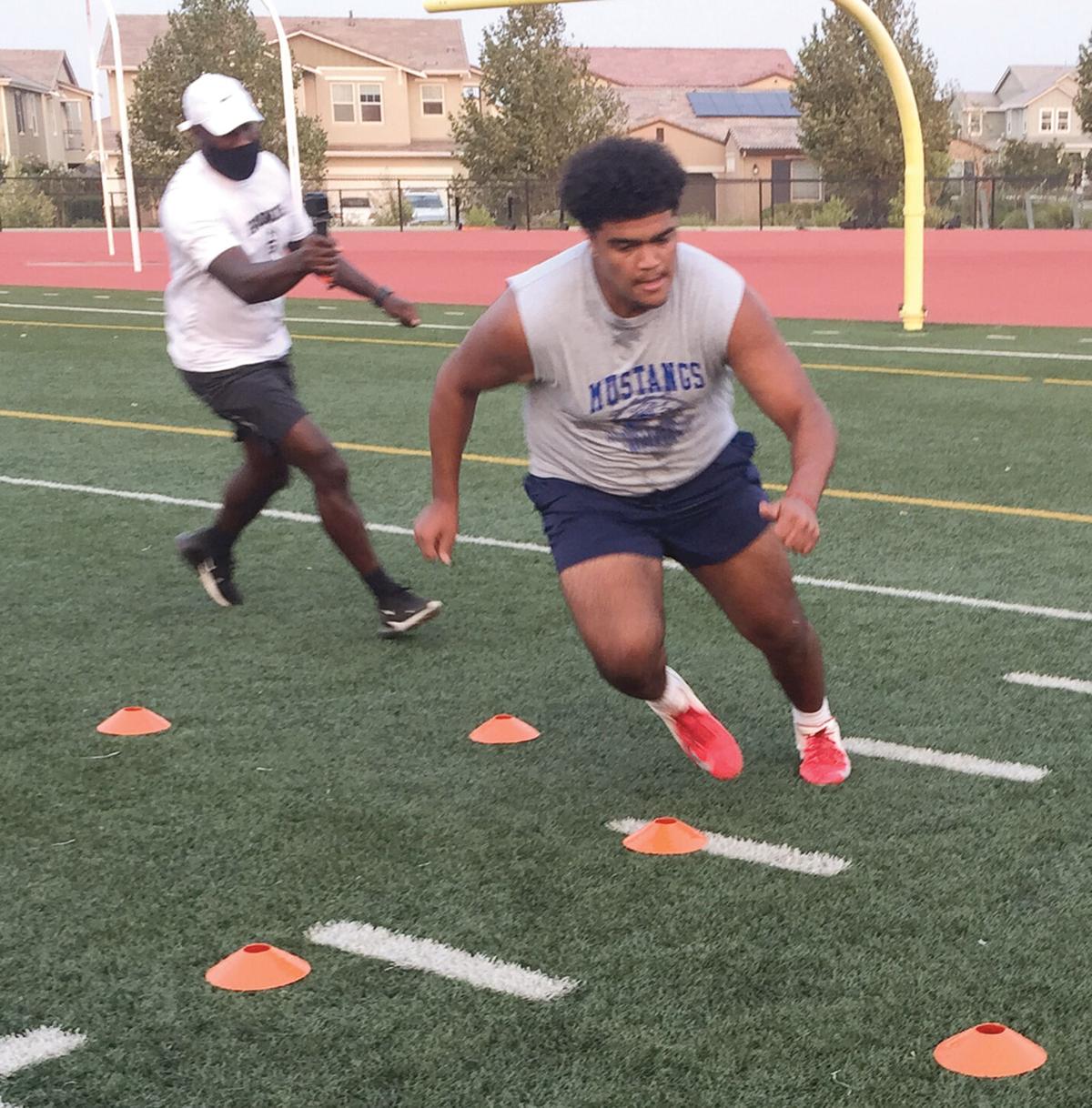 Mountain House High senior Dominic Childress runs through a drill while making a workout video with his trainer, Brandon Younger of GrindMode Elite Sports, on Monday at the high school. 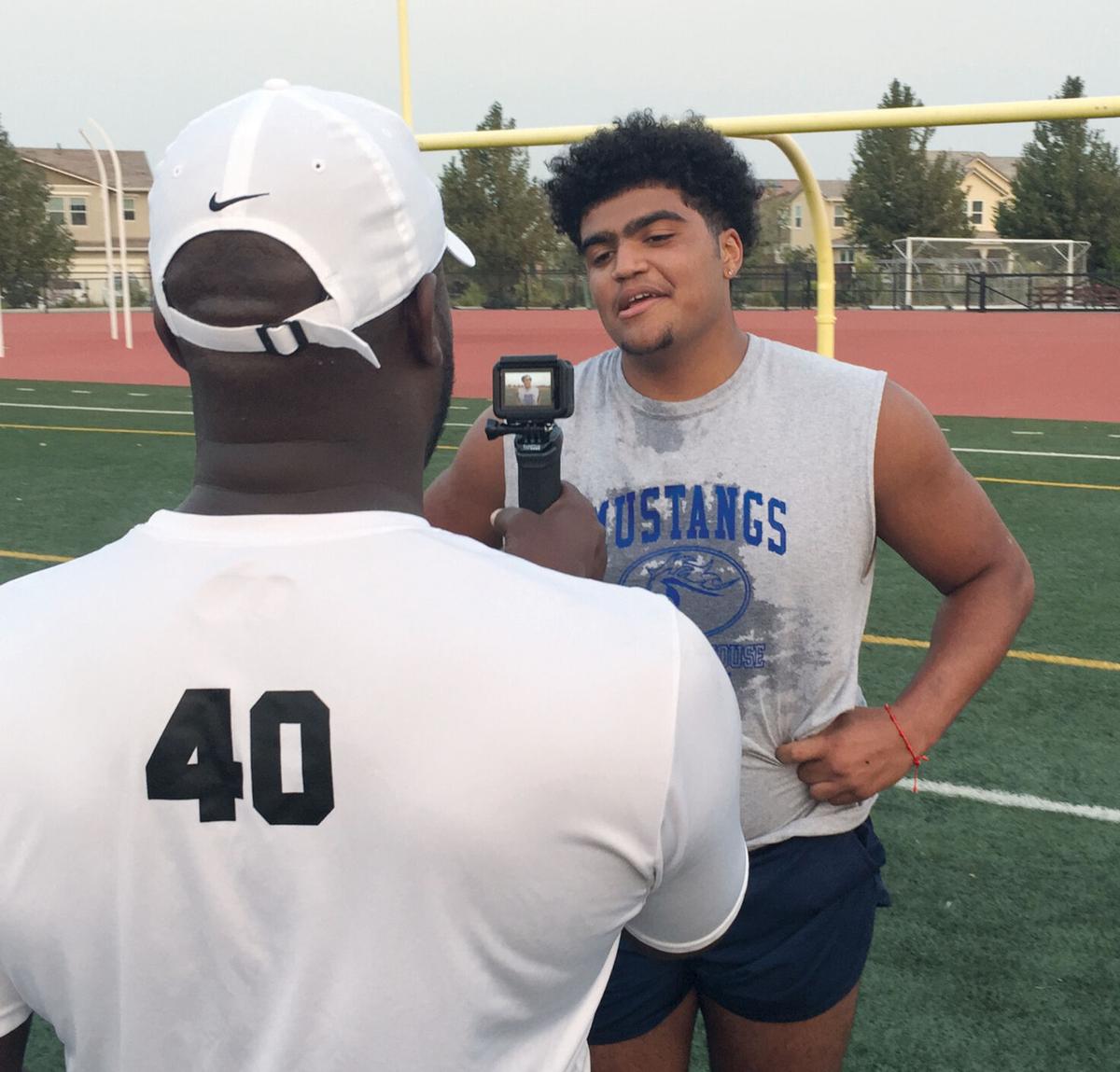 Mountain House High senior Dominic Childress wraps up a workout video with his trainer, Brandon Younger of GrindMode Elite Sports, on Monday at the high school.

Mountain House High senior Dominic Childress runs through a drill while making a workout video with his trainer, Brandon Younger of GrindMode Elite Sports, on Monday at the high school.

Mountain House High senior Dominic Childress wraps up a workout video with his trainer, Brandon Younger of GrindMode Elite Sports, on Monday at the high school.

With the 2020-21 football season on hold for now, Mountain House High senior Dominic Childress is taking control of his football future.

For many football players, senior year is the last chance to get noticed by college recruiters, determining whether that player will have a future in football beyond high school. Childress is doing all he can to convince those scouts and recruiters that a season postponed by COVID-19 hasn’t stopped him from proving his potential as a college player.

During a workout Monday at Mountain House High, Childress explained how, as a key defensive player for the Mustangs during his junior year, he initially developed the desire to improve.

“In the beginning of junior year, I was about 330 pounds. I was really big. I was really slow,” he said. By the end of the 2019 football season, Childress had resolved to build his football skills.

Assistant football coach Tim Cantu, who is also the Mustangs’ wrestling coach, tapped Childress for the wrestling team for the winter season of 2019-20. That was consistent with the advice he got at a football showcase at the University of Oregon during the summer of 2019, where one of the Ducks’ coaches advised him to take up wrestling.

Once he started working with Cantu in the wrestling room, everything changed.

“He changed my whole life. Before wrestling, I was very uncoachable. No one had really coached me,” Childress said.

The work ethic, the one-on-one competition, and the complete ownership of wins and losses resonated with him. At 6-foot-3, he went from 330 pounds to 275 pounds, learned how to work out on his own, and learned to take seriously the advice of coaches.

“It’s just something about wrestling, the practices. There’s something about it that makes you more disciplined,” he said, adding that wrestling also taught him to be receptive to his coaches’ direction. “They got through to me and showed me that I needed to change my way of thinking if I want to get anywhere in life.

“Wrestling changes your game in any sport you play. It makes you more athletic and a lot faster.”

Though wrestling changed his outlook, Childress is still focused on football.

To that end, he has attended a series of camps through the summer and has been invited to six more camps and showcases between now and January. That’s when the delayed football season is slated to begin, and he expects to connect with even more college scouts. He’s also been featured on West Coast Preps, which is linked to the Mountain House High page on MaxPreps.com, and made the college prospects rankings list for 247sports.com.

Childress said he had made contact with junior college and NCAA coaches and figured that the more he put his name out there, the more the top colleges would notice him.

On Monday, he went through his workout with trainer Brandon Younger, a Foothill College defensive coach and founder of GrindMode Elite Sports. It was a chance to record a workout to go along with videos from football games and wrestling matches, creating a more diverse package for recruiters to look at.

“Normally, the coaches will be out watching games or film,” Younger said, adding that the pandemic and postponement of the 2020 season had changed that. “Now, in the college ranks, it’s a different recruiting world now. They want to see guys working out, like the workout we did today. They want to get whatever they can get to evaluate the player, because they aren’t able to evaluate them during the season.

“It’s different, but just like a football game, you’ve got to make adjustments and do what you’ve got to do to put yourself in a position to succeed. That’s what Dominic is doing, and what a lot of kids have to do across the country in order to get noticed.”