Starting at
$52.00 for 365 days
Get Started
View all rates
You are the owner of this article.
Edit Article Add New Article
You have permission to edit this article.
Edit
Welcome, Guest
Celebrate Tracy
News
Voice
Our Town
Sports
Datebook
Obituaries
Advertising
Classifieds
Special Sections
1 of 11 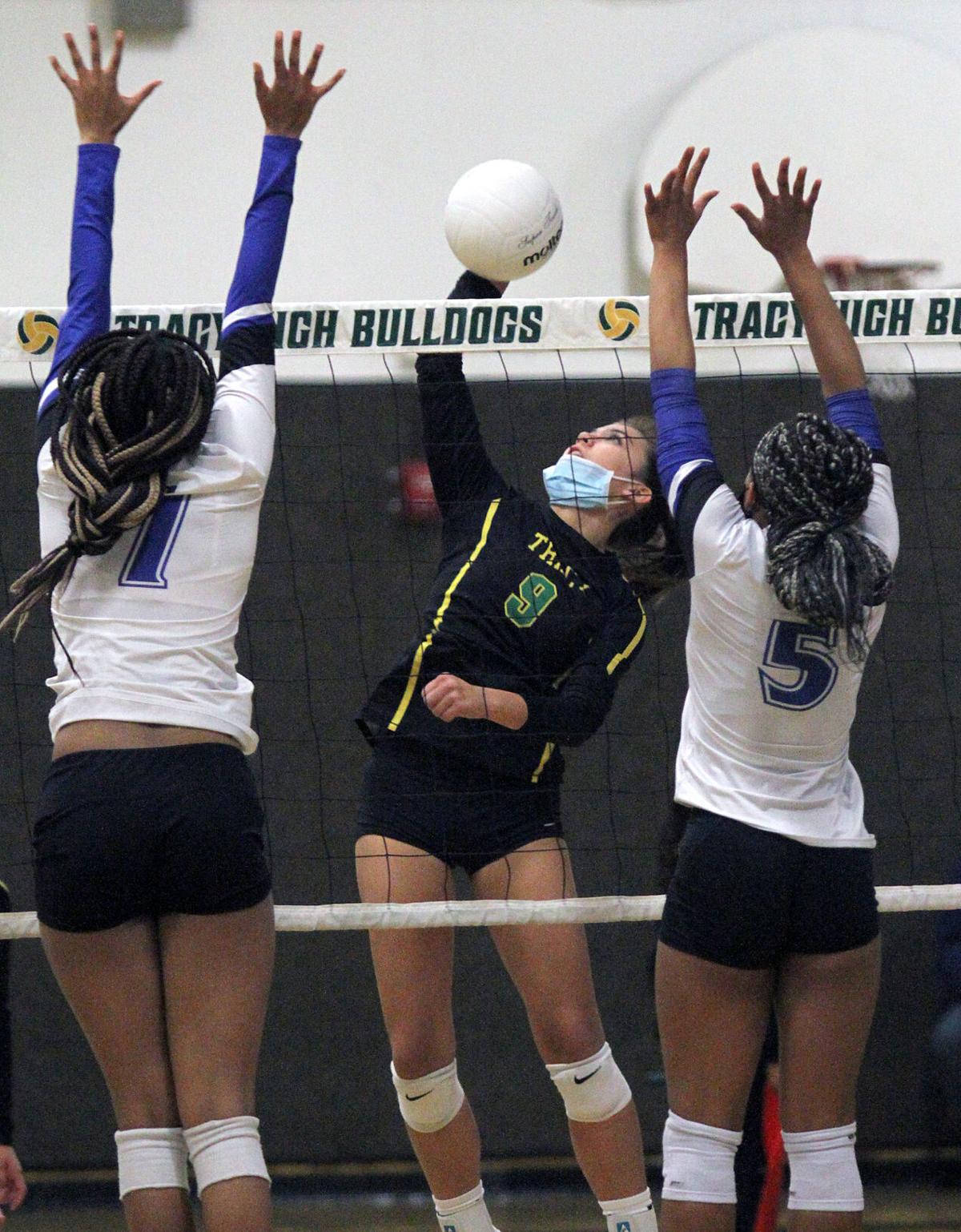 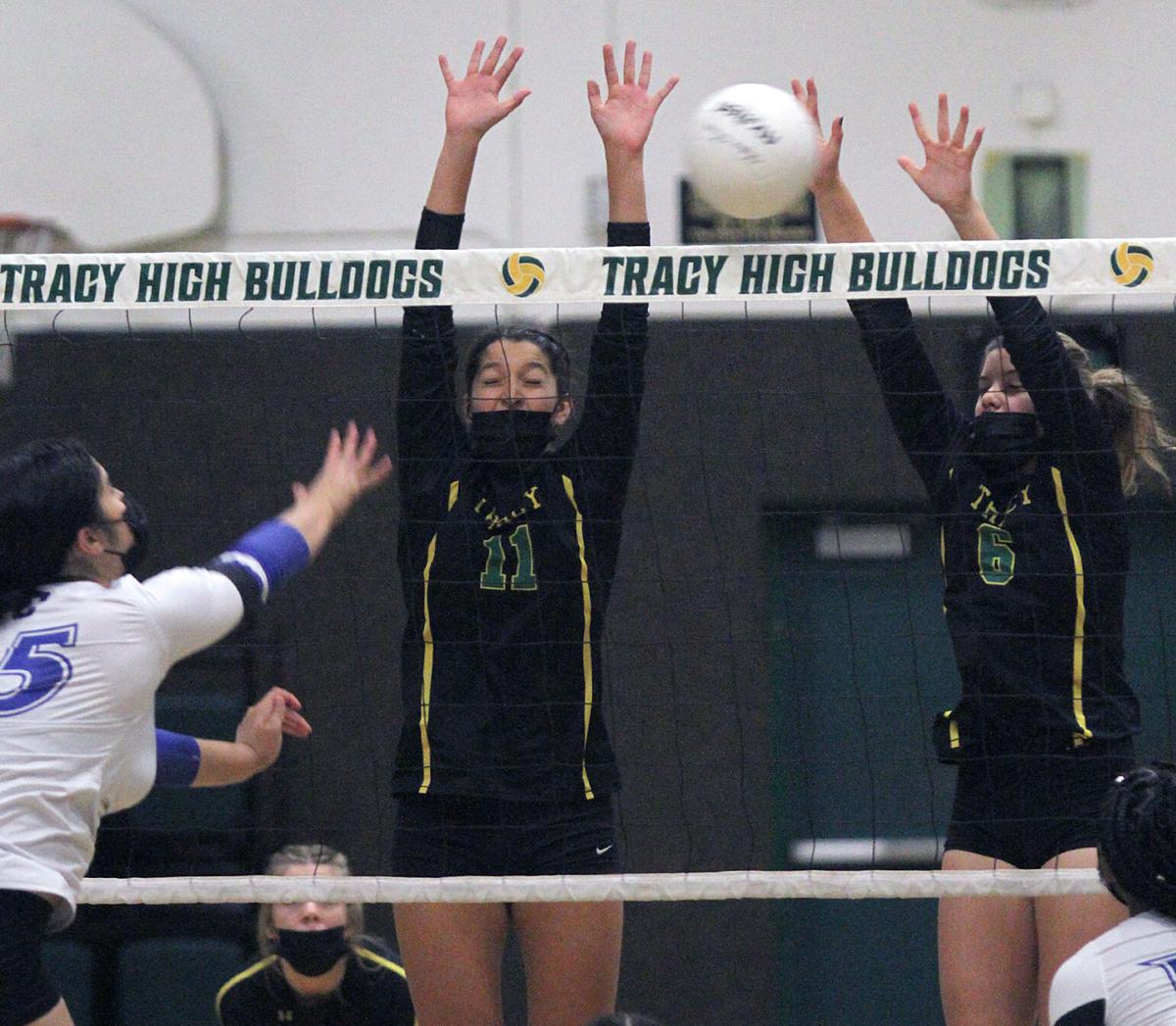 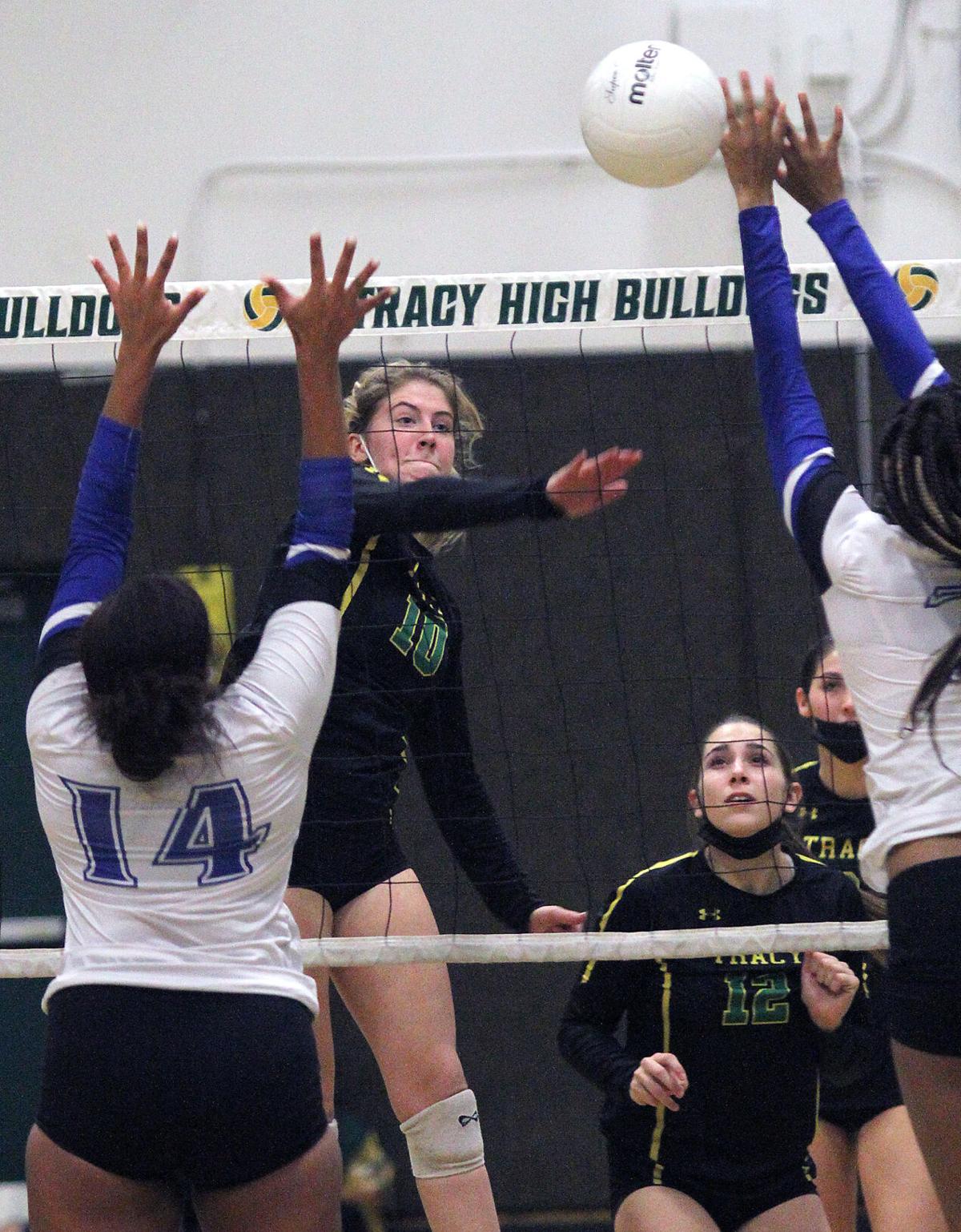 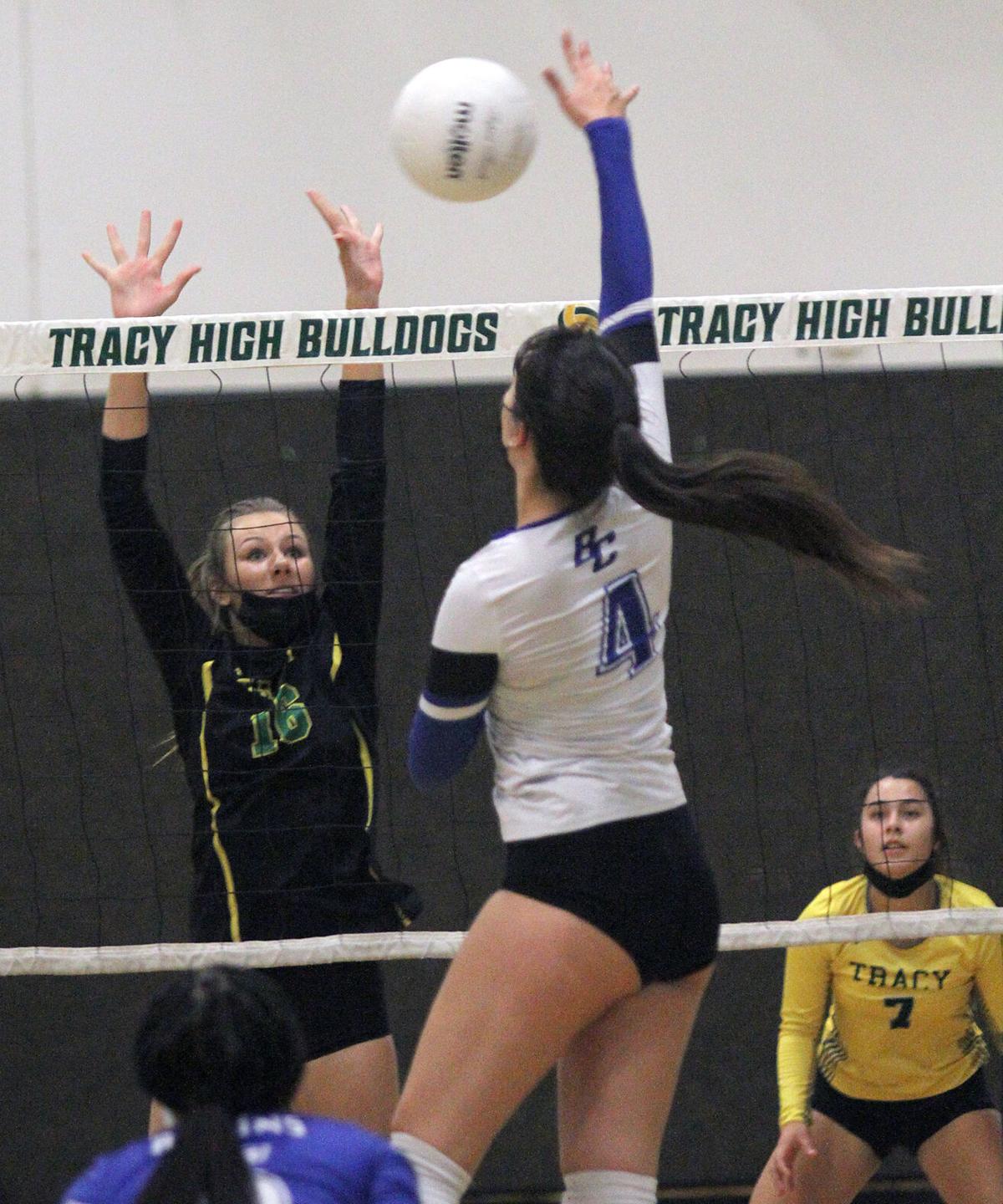 Tracy High junior Mariah Bogetti (left) goes up for a block against Bear Creek during a playoff match Tuesday night at Tracy High. 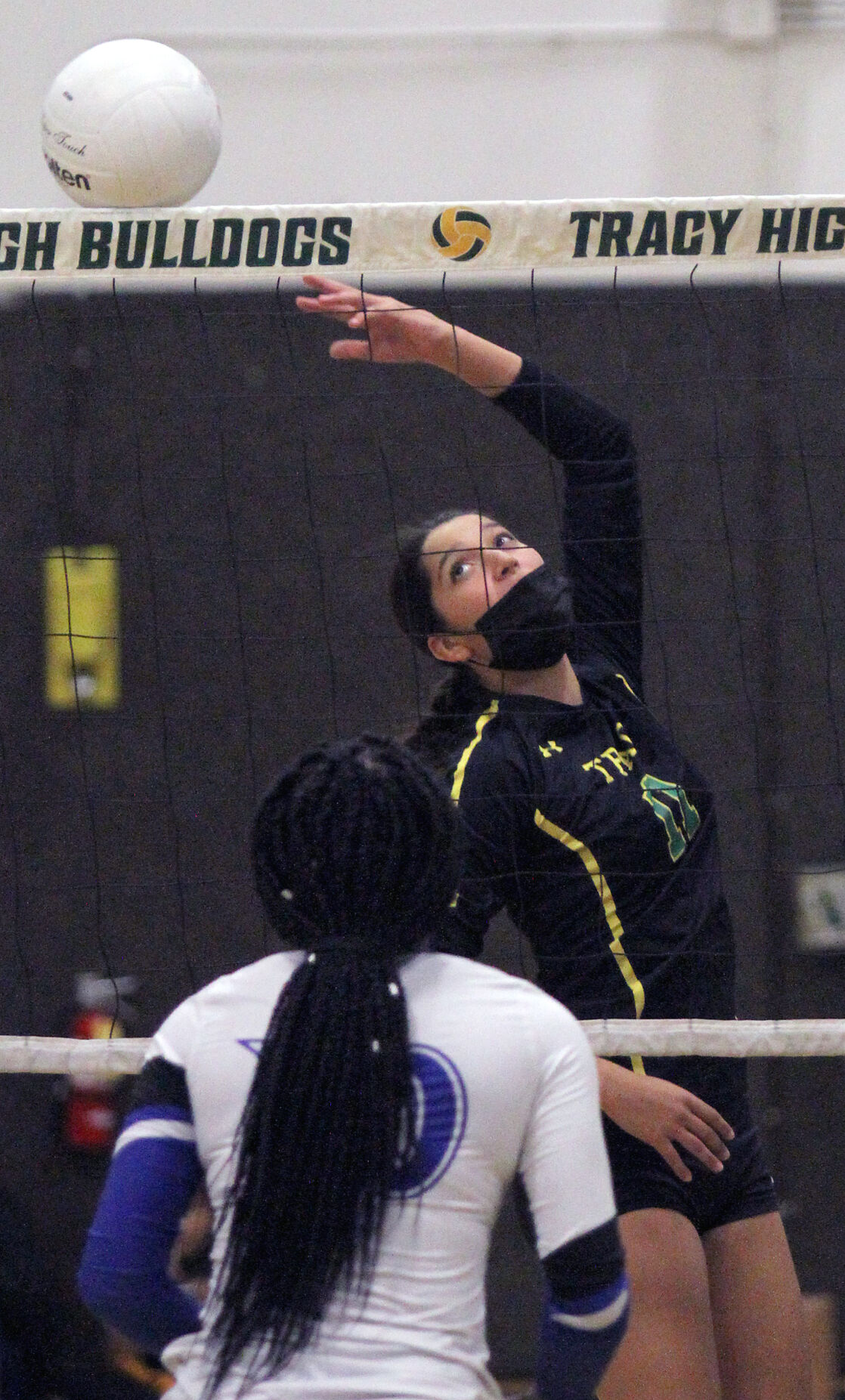 Tracy High sophomore Ellie Hernandez (right) flips the ball back over the net during a playoff match Tuesday night at Tracy High. 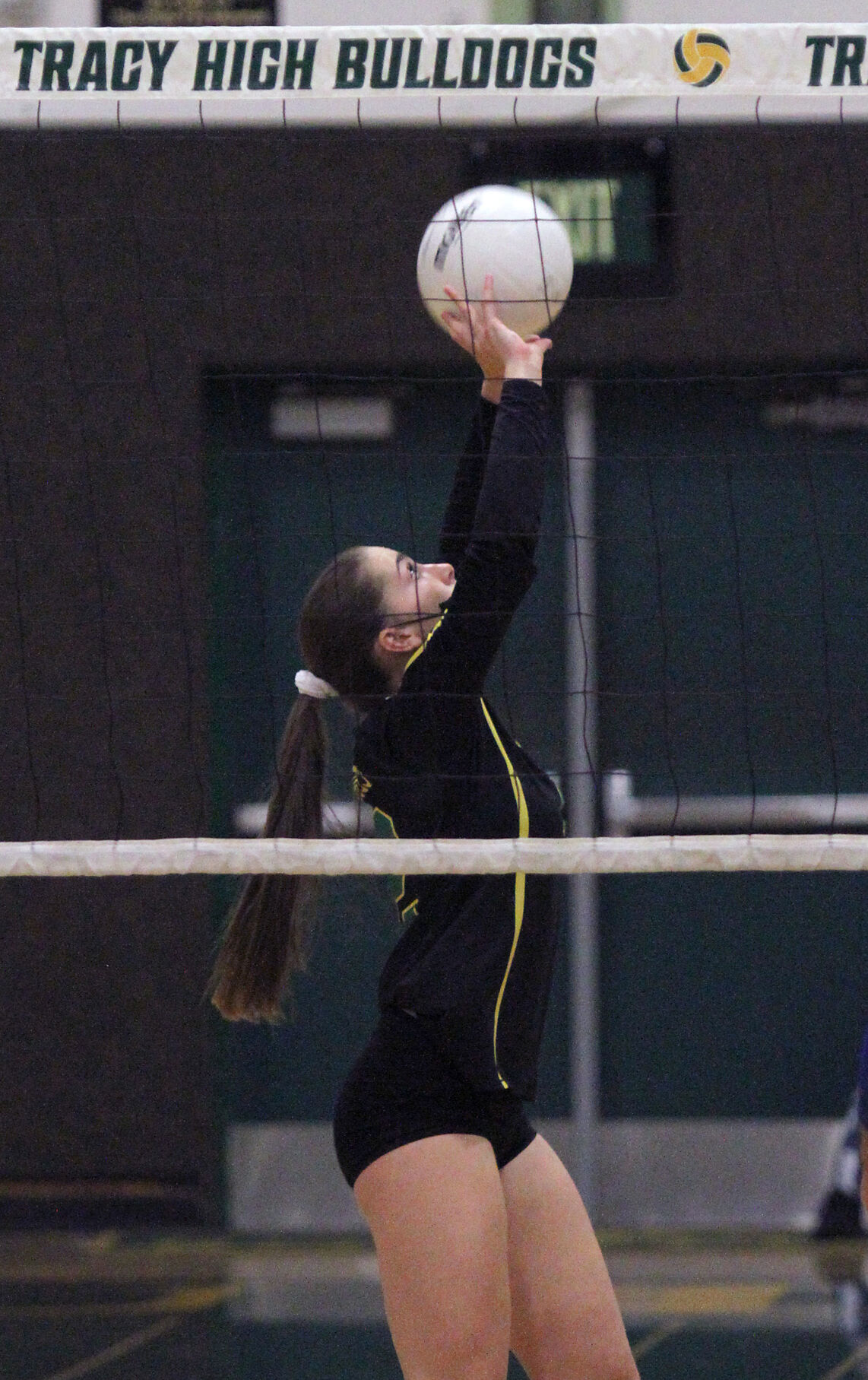 Tracy High junior Taylor Gardner sets the ball for a teammate during a playoff match Tuesday night at Tracy High. 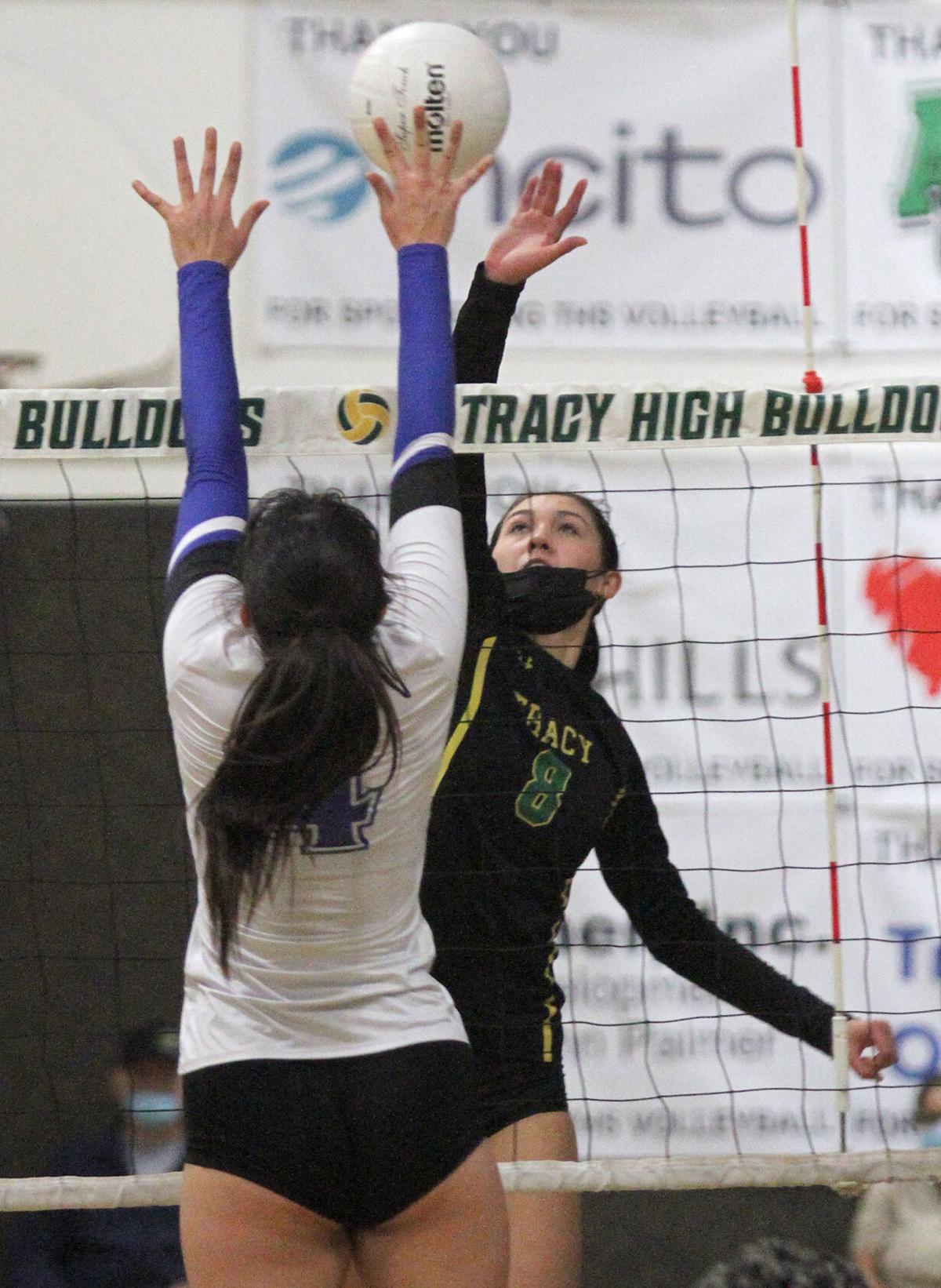 Tracy High junior Chloe Lemons goes up for a shot against Bear Creek during a playoff match Tuesday night at Tracy High. 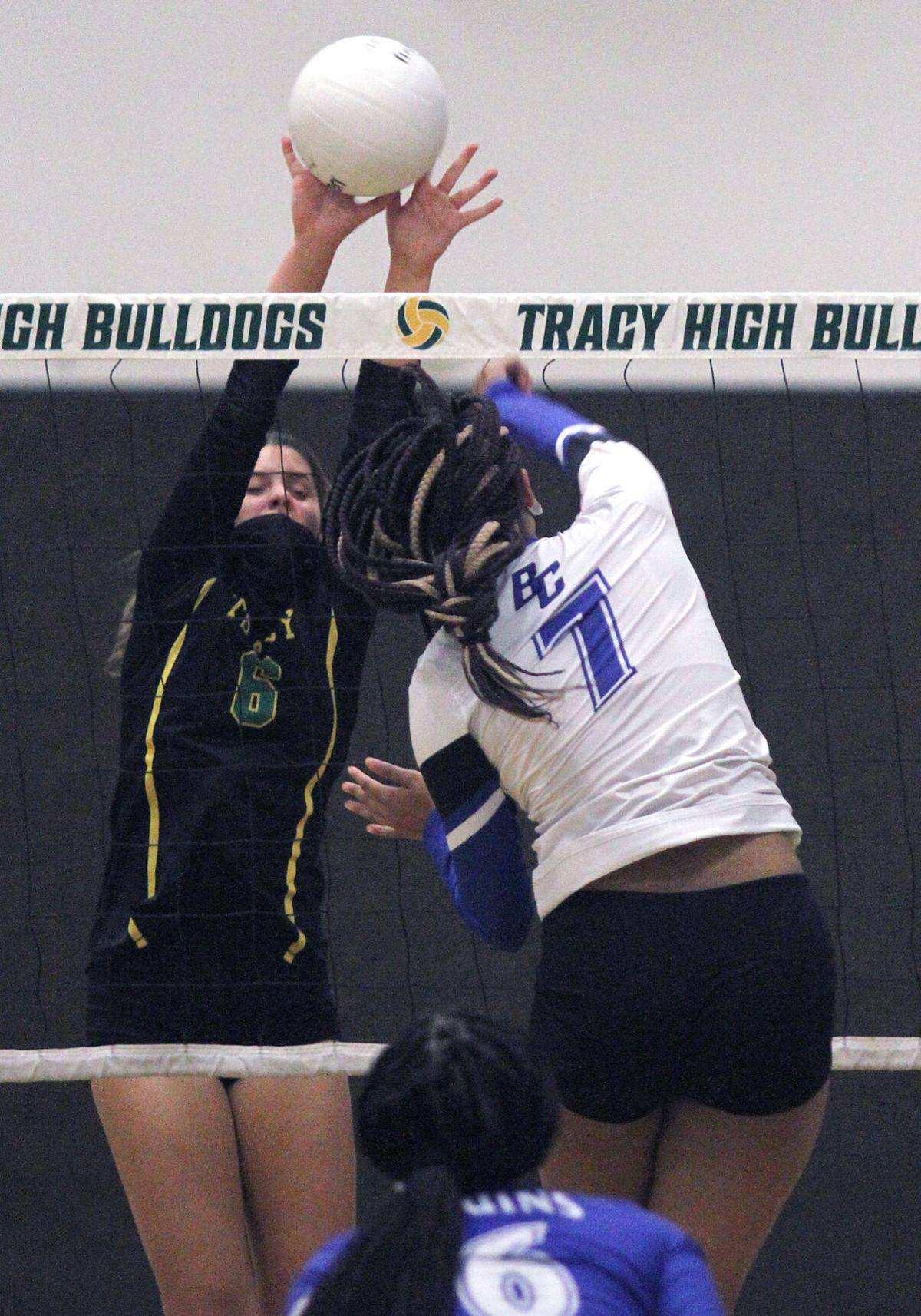 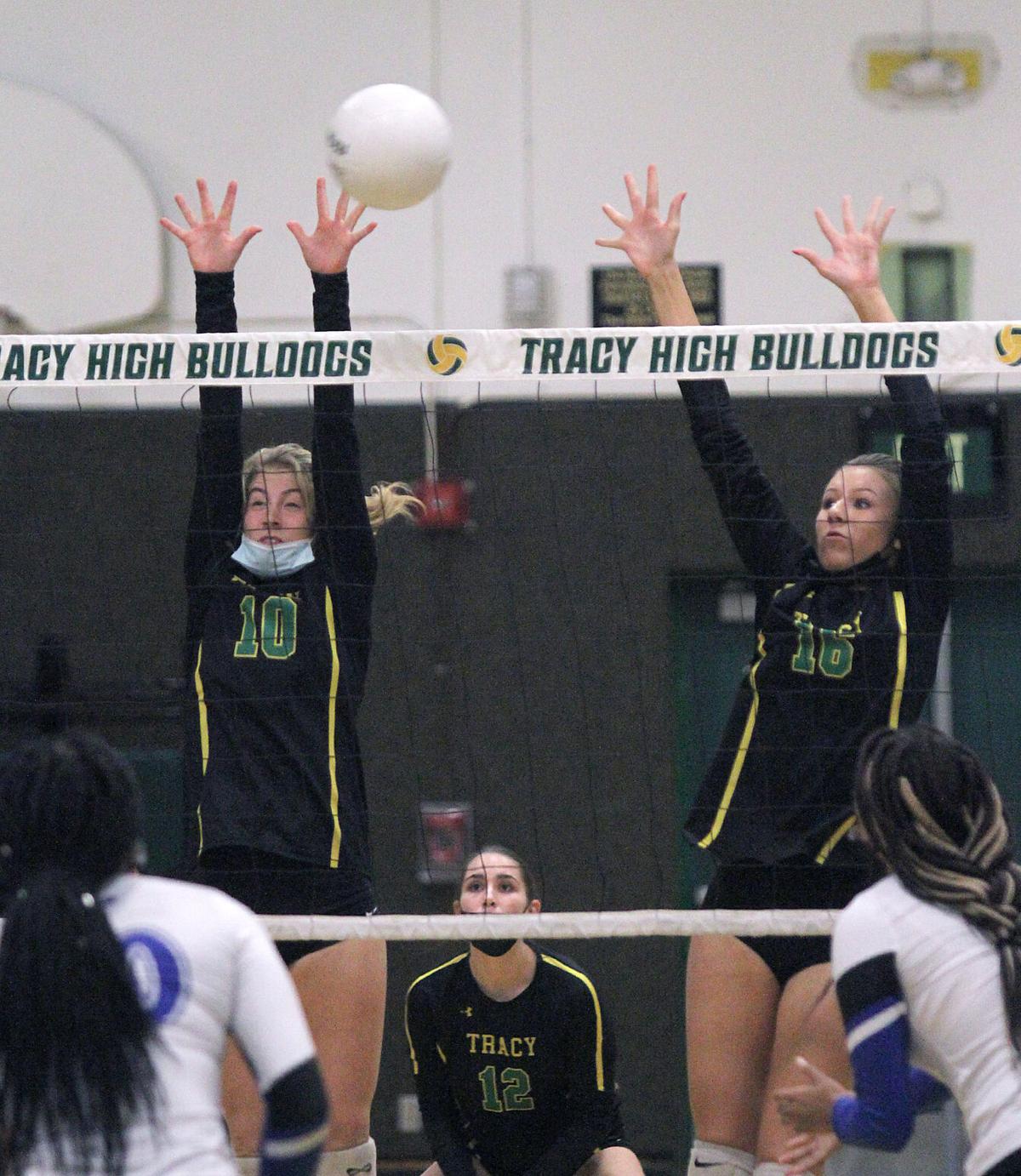 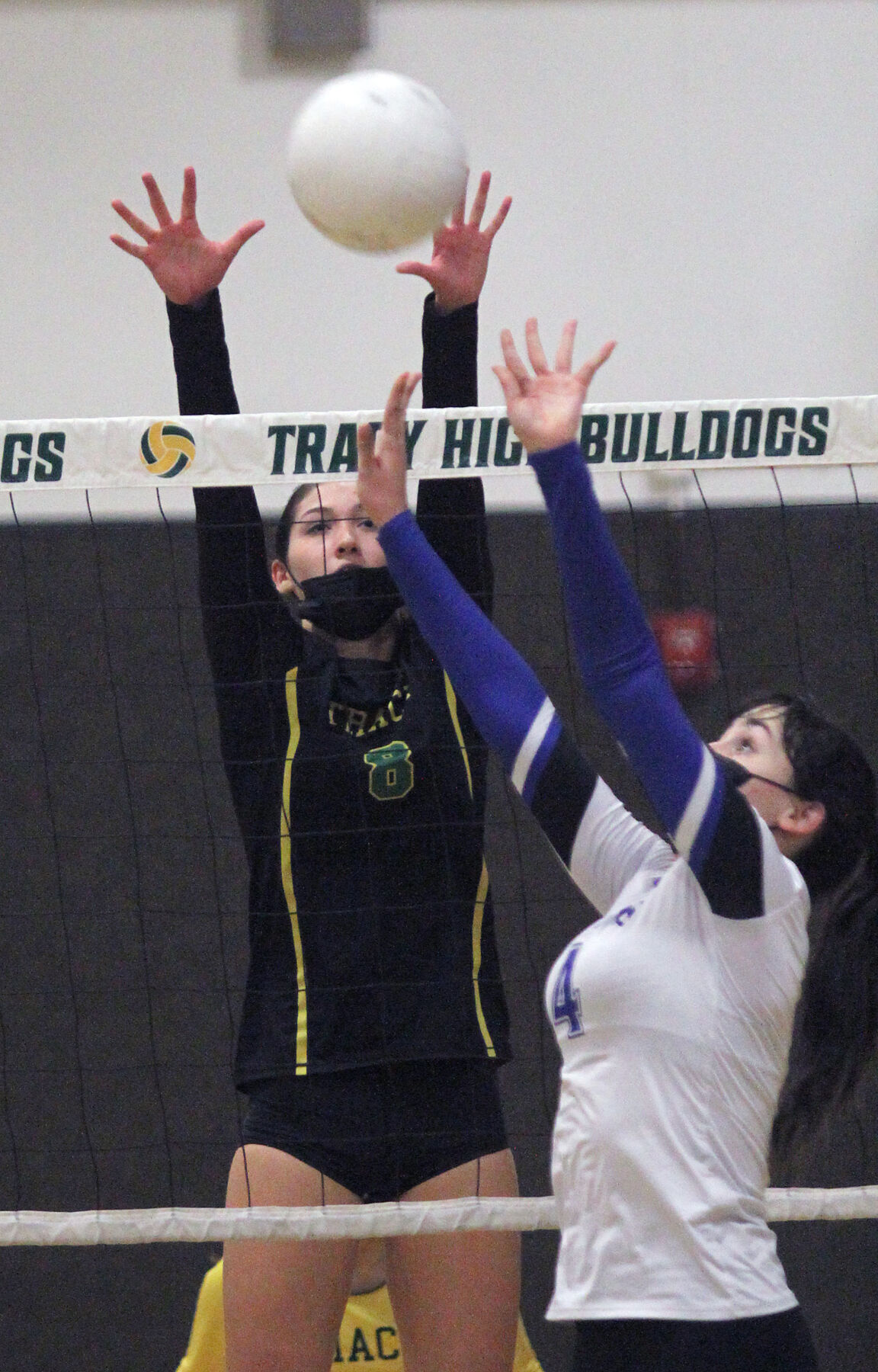 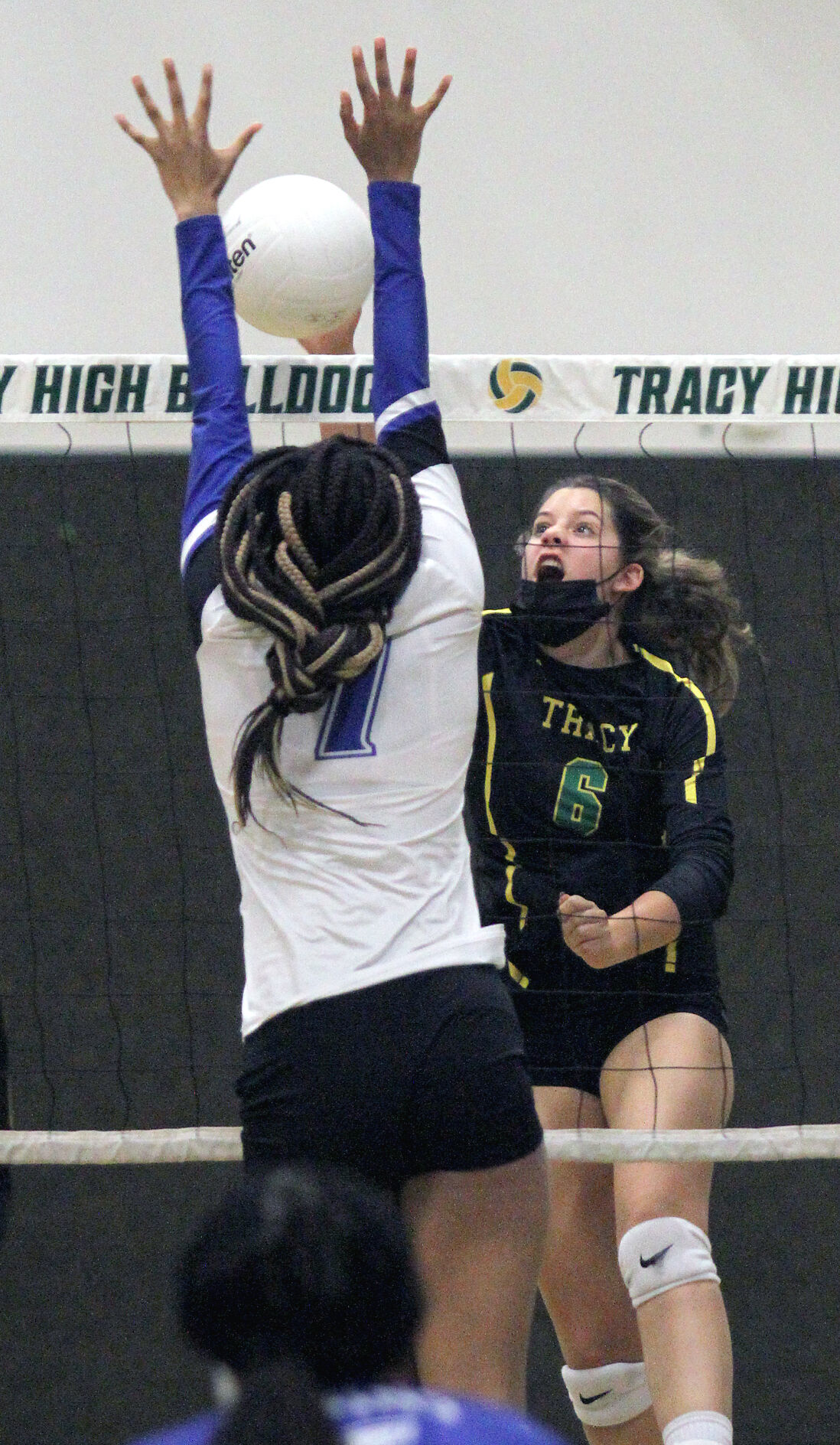 Tracy High junior Mariah Bogetti (left) goes up for a block against Bear Creek during a playoff match Tuesday night at Tracy High.

Tracy High sophomore Ellie Hernandez (right) flips the ball back over the net during a playoff match Tuesday night at Tracy High.

Tracy High junior Taylor Gardner sets the ball for a teammate during a playoff match Tuesday night at Tracy High.

Tracy High junior Chloe Lemons goes up for a shot against Bear Creek during a playoff match Tuesday night at Tracy High.

Tracy High’s volleyball team won its first round match of the Sac-Joaquin Section Division 2 playoffs with a 3-0 win over Bear Creek High of Stockton on Tuesday, setting the Bulldogs up for a quarterfinal match on Thursday against El Capitan High of Merced.

The Bulldogs won Tuesday’s match at Tracy High’s Bill Swenson Gymnasium with scores of 25-20, 25-12, 25-16, with the expectation of tougher matches to come as the Tracy team aims to repeat its SJS Division 2 title run from 2019, when the Bulldogs claimed their first-ever SJS blue banner for volleyball.

“Going into this we knew we held the No. 1 seed and everyone in this bracket is coming for us. We’re the team they want to beat,” said senior team captain Kylie Van Os. “I think we came in with the most energy we’ve had all season. We’re hoping to carry that on into our game on Thursday and hopefully the rest of playoffs that continue after that and hold on to our section championship title.”

Tracy (17-5, 8-2 Tri-City Athletic League) held the lead through most of the night, but also saw the Bear Creek Bruins (20-12, 10-0 San Joaquin Athletic Association), coming off of a 3-0 win in their play-in match against Rodriguez High on Monday, battle back to tie it up early in the first set and briefly take the lead in the third set.

“I expected Bear Creek to come out full swings,” said junior outside hitter Chloe Lemons, who scored repeatedly for Tracy with her kill shots from the left side “They had a late game last night and I expected them to be running off of adrenaline. Our team really brought it tonight. We played together. We had a lot of energy. Everything worked.”

“I think we just need to keep our same winning mentality and our energy, to be up at all times.”

Tracy started with the lead in the first set, and shots from Van Os on the right side kept the Bulldogs in control even as the Bruins kept the set close and tied it up a few times. Senior Ava Staas scored a series of service points with Lemons’ support at the net, which gave Tracy a comfortable lead through the end of the set.

Tracy led the entire way through the second set, with senior Alyssa Cargill scoring service points supported by shots from Van Os and junior Jianna Palmer. Staas again led Tracy on a string of service points, with Lemons and junior Mariah Bogetti making shots as the Bulldogs charged out to a 15-6 lead and maintained that pace through the end of the set.

The Bruins started strong in the third set, briefly held the lead, and continued to keep the game close. Tracy finally started to pull away with Lemons at the service line at the net. The Bulldogs also saw sophomore Ling Han and Palmer provide effective protection at the net, and then Han scored on a spike at the net to close out the set and confirm the win for Tracy.

“I think this is probably one of our better games, coming out with energy and finishing in three,” Palmer said. “I expected a lot of competition from the Bear Creek team. I’m excited to see our game on Thursday and hopefully moving on to another section game.”

Tracy coach Cat Ebojo-Vaughns said the Bulldogs shared the ball well on Tuesday and executed effective passing, though she expects the team to minimize its hitting errors against El Capitan.

“We just want to play tougher with each game,” she said.

The Delta Charter Dragons won their SJS Division 5 playoff match at home with a three-set sweep of John Adams Academy of Roseville.

Delta Charter Coach Mike Helton said that teamwork kept the Dragons in control, including a 22-point run with junior Hailey Medieros at the service line in the second set.

He added the Dragon defense held tough all night with five strong blocks from junior Kristen Boyer, and consistent digs from senior Leslie Mangskau, providing an effective response to the Adams Academy tough outside hitter.