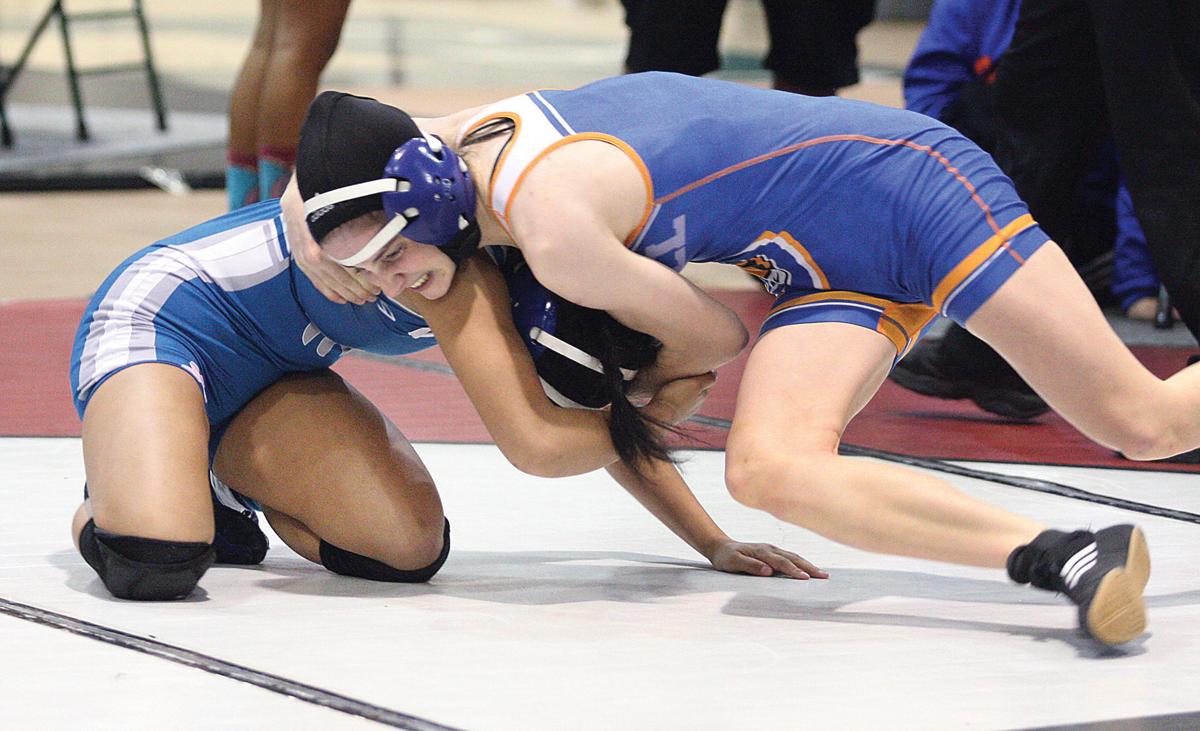 Kimball High sophomore Sophia Stagnaro makes her move against Ezra Moral of Sierra High, her opponent in the third-place match of the 103-pound bracket at the Sac-Joaquin Section South Regional Girls Wrestling Tournament on Saturday at Central Valley High in Ceres. 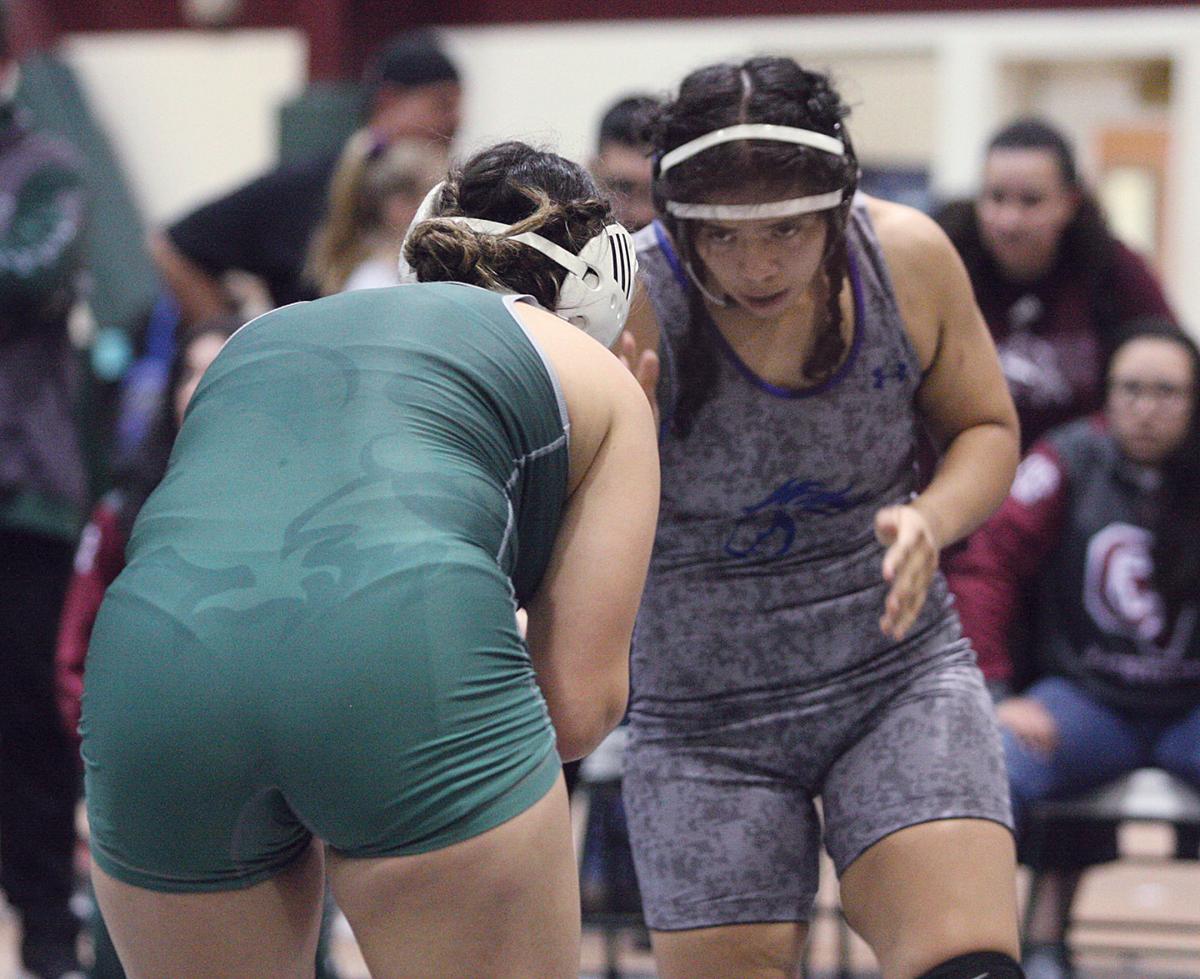 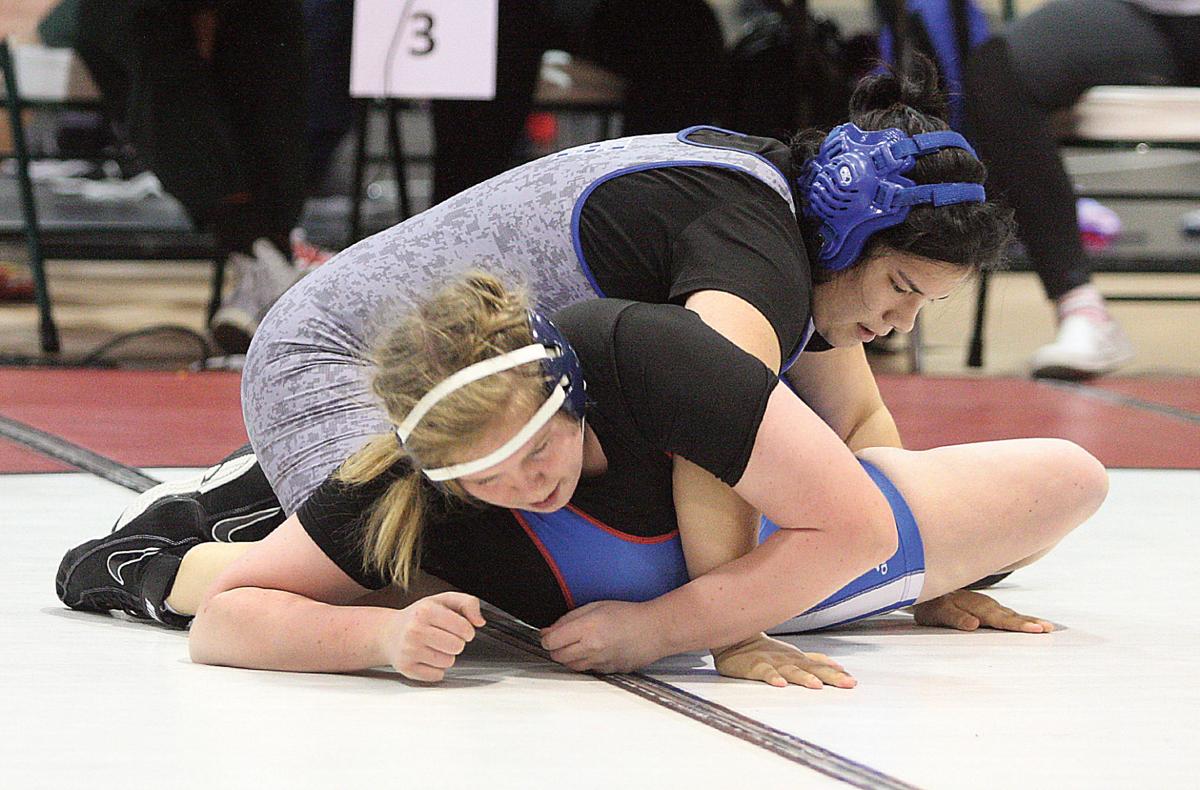 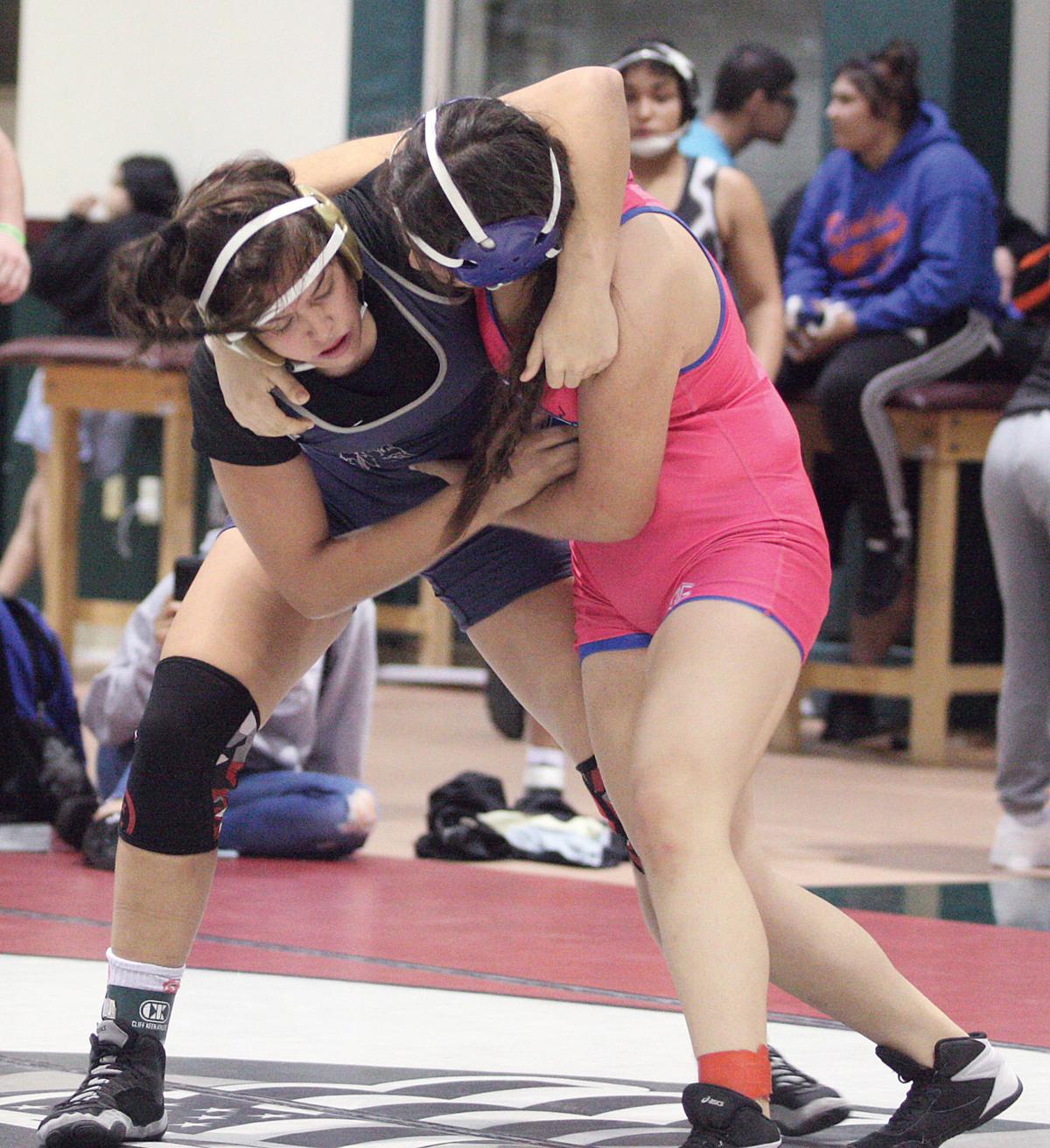 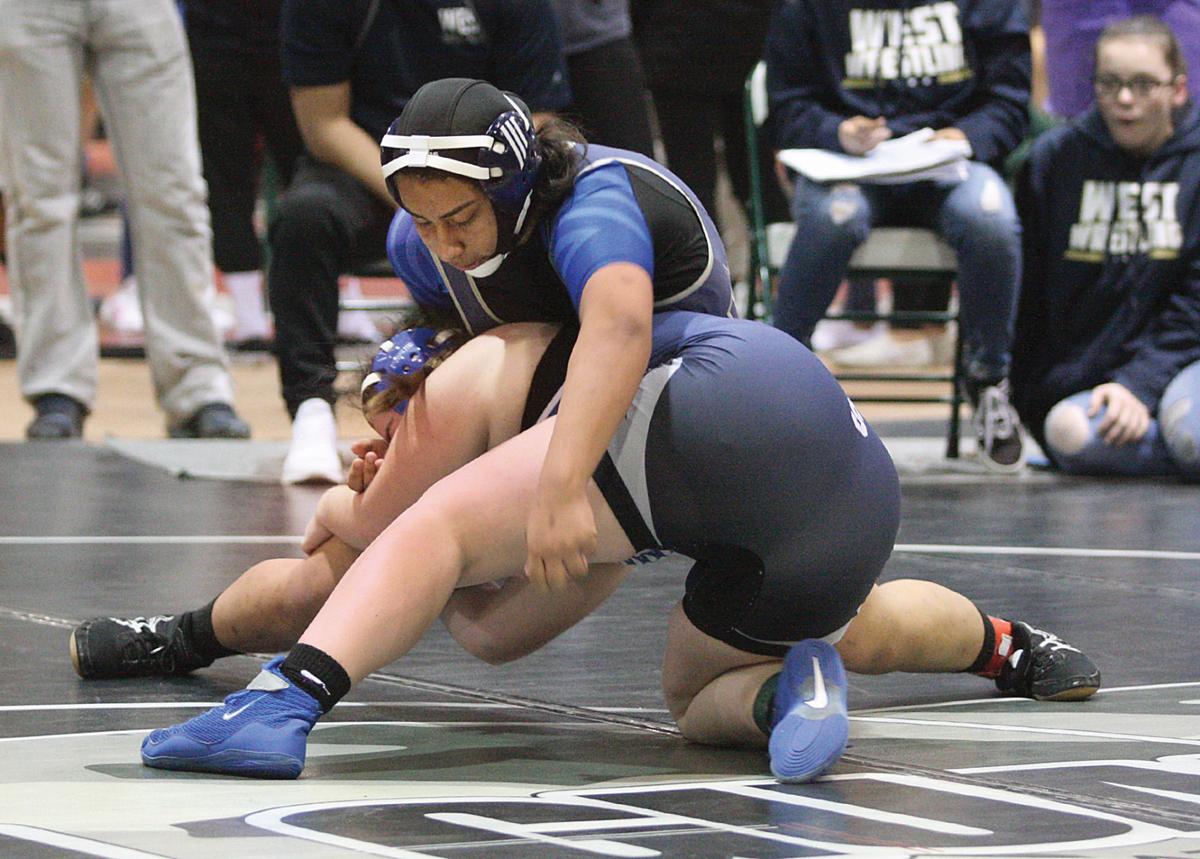 Kimball High sophomore Sophia Stagnaro makes her move against Ezra Moral of Sierra High, her opponent in the third-place match of the 103-pound bracket at the Sac-Joaquin Section South Regional Girls Wrestling Tournament on Saturday at Central Valley High in Ceres.

Ramona Jimenez has kept building up her skills in four years as a high school wrestler.

Now, with a second-place finish at the Sac-Joaquin Section Girls Southern Regional tournament, she’s on the path to a repeat trip to the California Interscholastic Federation state championships.

“State helped me get more confident and become a better leader for my team. I knew that was a different level,” she said of her experience at last year’s state tournament, where she went 1-2.

She said that just qualifying, after placing sixth at the SJS Masters tournament last year, set her up for this year’s accomplishments.

Jimenez went into the regional tournament, held Friday and Saturday at Central Valley High in Ceres, as the No. 2 seed in her class with a 25-5 record this year.

She won three matches in a row in the preliminary rounds of the 162-pound bracket, all by pin, before facing Carla Martinez of Central Valley High in the championship match. Martinez scored on a takedown midway through the first period, but after that the two wrestled an even match. Neither was able to take the advantage again and the match ended as a 2-0 decision for Martinez.

Her next stop is the SJS Masters tournament this Friday and Saturday at Stockton Arena.

“I know I have to settle back down because Masters is another stop on the way to state, and that’s my goal, to get back to state,” Jimenez said.

Jimenez is one of eight local girls who will compete at the SJS Masters tournament, including four who took third place at the regional meet last weekend.

Kimball High sophomore Sophia Stagnaro (103) took a 26-5 record into the meet and went 6-1, including two wins by pin and then a loss by pin in the quarterfinals to Hailey Ward of Turlock, the eventual champion. After that, Stagnaro won four matches in a row, including the third-place match, which she won with a second-period pin (1:32) over Ezra Moral of Sierra High.

“I wrestled her before when we wrestled in team (duals). I knew she was going to shoot on me. I just needed to work on defense,” Stagnaro said. “There was just one point where I was on top and I pinned her down.”

She is going to the section championships after wrestling for just three months. Her grandfather, a former high school wrestler, inspires her, as do her teammates.

“I just want to see how far I can go,” she said. “My parents have really been helping me along the way.”

West High freshman Kalila Shrive placed third in the 162-pound bracket. She went into the tournament with a 20-2 record and won four of her five matches. She won her first two matches by pin and then lost to Mountain House High’s Jimenez in the semifinals.

In that match, the two were evenly matched through the first two periods. Jimenez finally got the advantage late in the third period and won by pinning Shrive with 14 seconds left in the match.

Shrive went on to win two more matches, including the third-place match against Yadira Flores of Atwater High, who she pinned in the third period (4:37).

“She liked hooking my arms and going for a head toss or just turning me straight on my back,” Shrive said. “I just made sure I circled out of it. I tried to get good setups so I could take shots and take her down.”

She is also headed for the section championships in her first year as a wrestler and said that each win inspires her to keep working hard.

“I didn’t think I was going to get this much into wrestling, but I’ve enjoyed it. It’s a good experience,” she said. “I love hanging out with my team. They’re a great environment and they encourage and help me with anything that I need help with.”

Mountain House senior Jessica Emerson (191) had a 17-8 record before the tournament and went 3-1 to place third. She won her quarterfinal match by pin and lost to eventual champion Alexa Garcia of Sierra High in the semifinals. Emerson won her next match on a 13-2 major decision and then beat Megan Brock of Atwater High in the third-place match.

Emerson is making her second trip to the SJS Masters tournament, and her three wins on Friday and Saturday, including her 7-4 decision over Brock, who beat her in previous competition, make a big difference moving forward.

“Last year, I placed sixth (at the regional tournament) and I feel like I got a pass to Masters,” she said. “This year, I told my coach that I feel like I want to earn my spot, and it was the same situation: There were eight girls exactly, so my goal was to place as high as possible.”

Kimball High junior Itzel Montoya (HWT) is new to wrestling and had a 4-0 record going into the regional tournament. She went 2-1, winning by pin in her first match, losing by pin in the semifinals, and winning the third-place match with a second-period pin (1:28) against Aneisha Goodlow of Lincoln High.

Montoya said the strength training and conditioning that wrestlers undergo during the season paid off for her.

“I’m stronger than I thought I was,” she said. “It’s exciting. I didn’t think I would go that far, but I’m really happy and proud of myself.”

Tracy High sophomore Alysse Leanos (113) placed fourth in her bracket, going 3-2 for the tournament with three wins by pin and two losses by pin. She is looking forward to the competition at the next level.

“I’ve learned that I’m way more capable of doing stuff that I didn’t know I was able to do, and I’ve gained a lot of confidence,” she said. “I’m pretty happy with how I did for it being my first year wrestling.”

Masters qualifiers also include Mountain House senior Michelle Poland (118), already a three-time Masters qualifier, who lost her semifinal match on Saturday on an injury default. Mountain House coach Tim Cantu said she had to withdraw because of a dislocated shoulder, but she was still guaranteed at least sixth place at the regional tournament and is expected to compete this weekend.