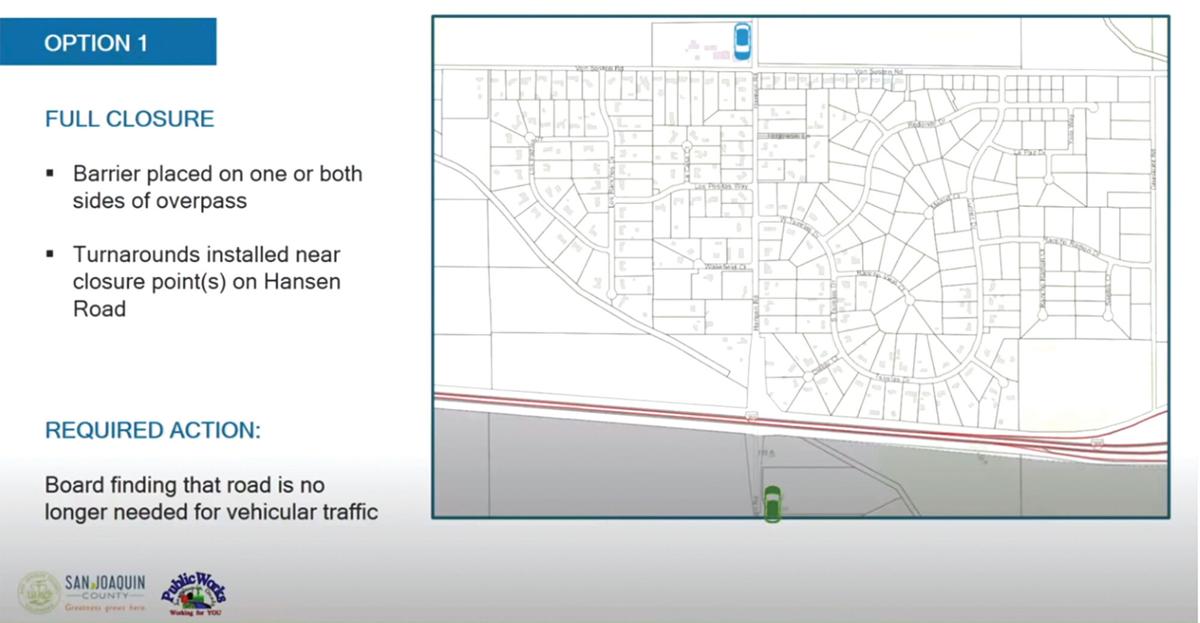 full closure of Hansen Road would require the street to redesignated as no longer needed for vehicular use. 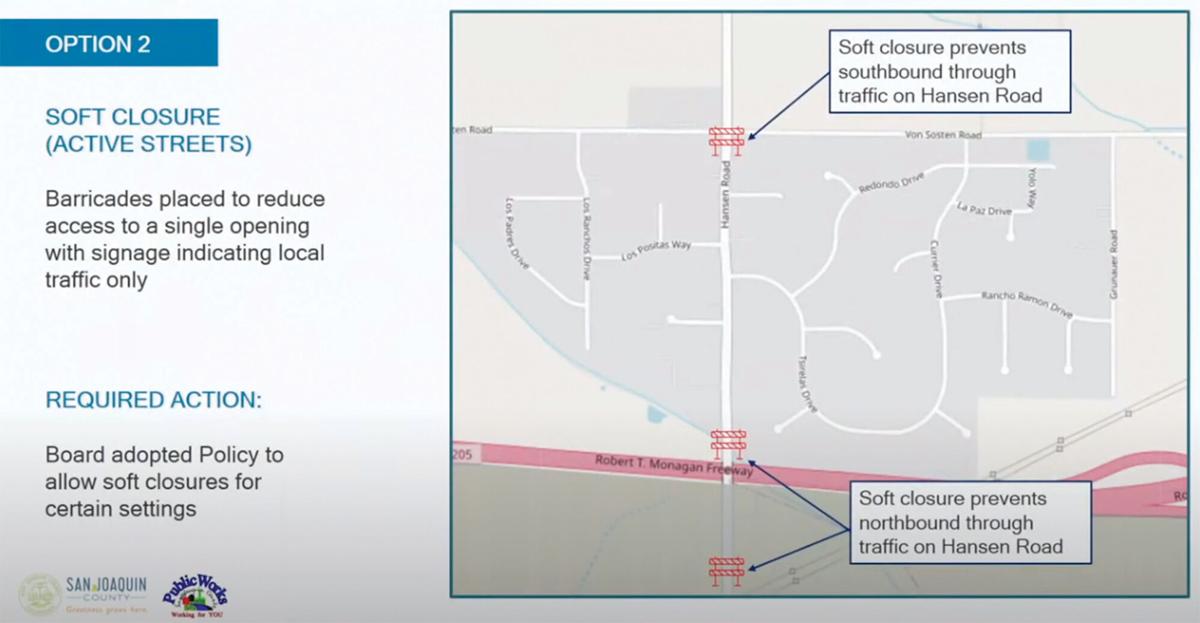 Hansen Road could potentially closed to “local traffic only” during certain parts of the day. 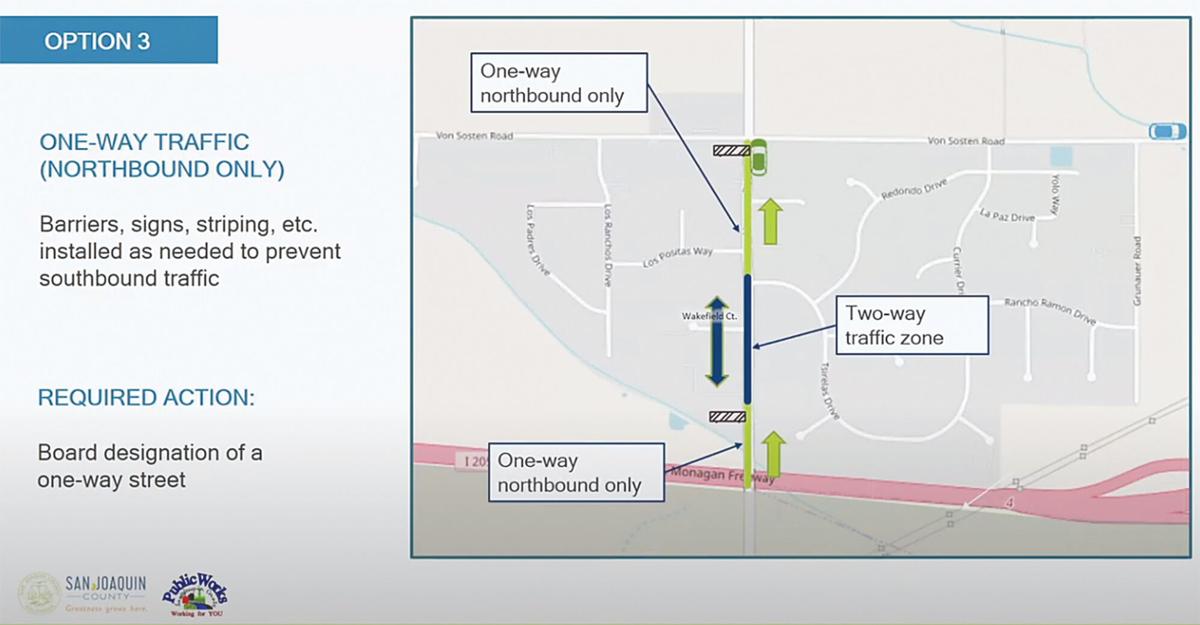 Designating Hansen Road as a one-way street would prevent any southbound traffic from entering the area. 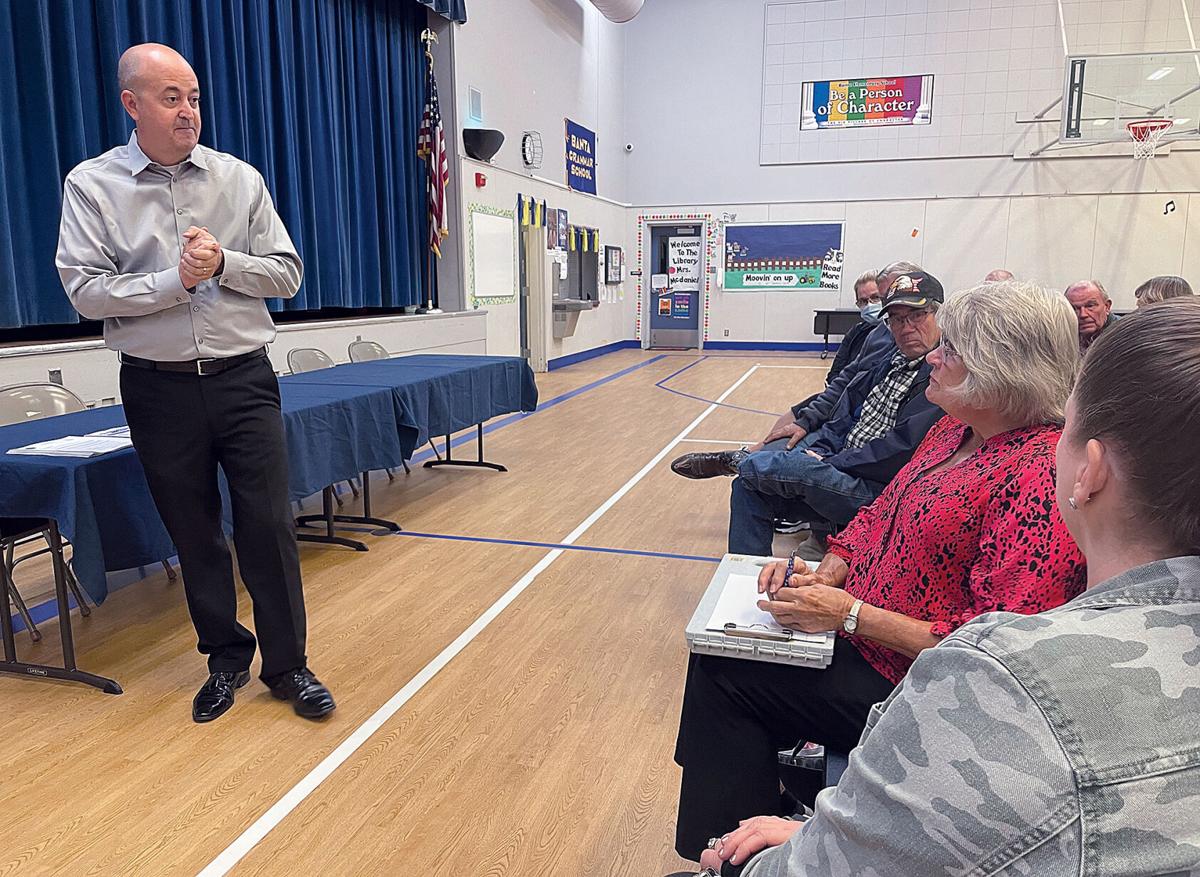 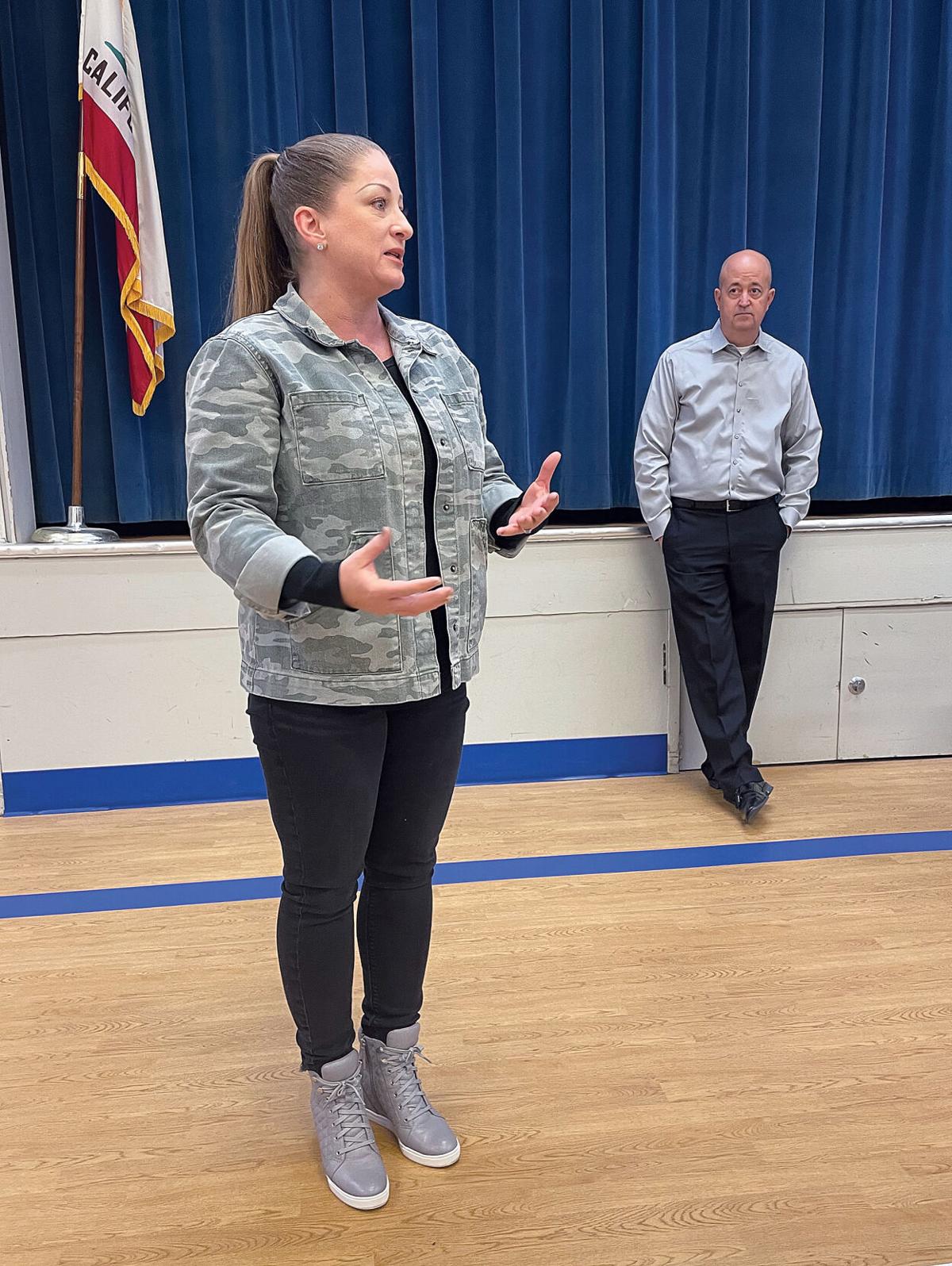 Lisa Delashaw-Silveira is one of the Banta residents spearheading the initiative to eliminate truck and commuter traffic in the residential areas of the community. 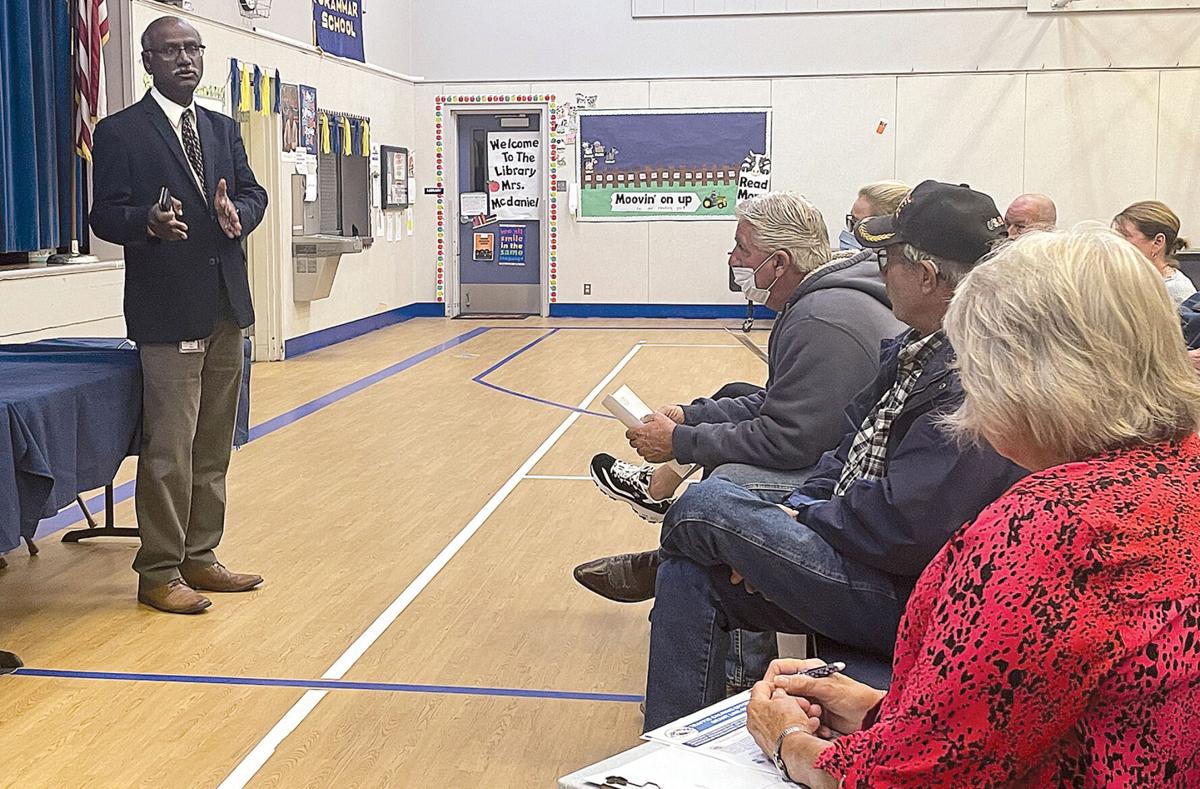 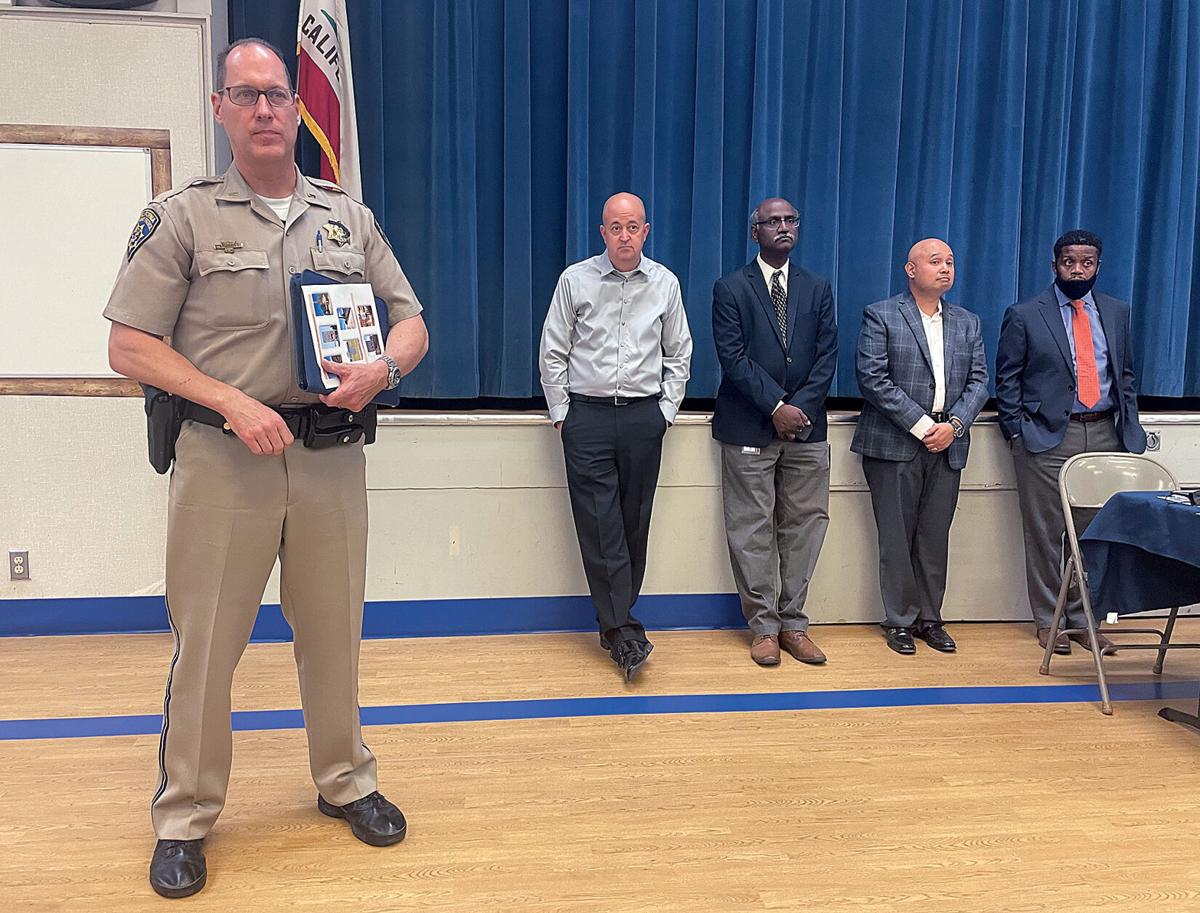 full closure of Hansen Road would require the street to redesignated as no longer needed for vehicular use.

Hansen Road could potentially closed to “local traffic only” during certain parts of the day.

Designating Hansen Road as a one-way street would prevent any southbound traffic from entering the area.

Lisa Delashaw-Silveira is one of the Banta residents spearheading the initiative to eliminate truck and commuter traffic in the residential areas of the community.

After a presentation from the County’s Public Works Department, numerous public comments from community members and a lengthy discussion, the San Joaquin County Board of Supervisors voted unanimously on Tuesday to take several steps and ultimately find a solution to mitigate the truck and commuter traffic that has been plaguing the Lammersville community for several years.

The item was brought to the agenda by District 5 Supervisor Robert Rickman, who explained to the board that this is something that the county has been working closely on with residents, the City of Tracy, California Highway Patrol and the developer ProLogis -- which is currently 30% in development of the large industrial business park in the area, International Park of Commerce -- but had not yet come to a solution that was agreed upon for all stakeholders involved.

Residents have been advocating for a permanent closure of Hansen Road, the main offending thoroughfare along with Von Sosten Road, that unauthorized tractor-trailer trucks and speeding commuters have been using to avoid freeway traffic during rush hour. The dramatic increase in the amount of vehicles going through the neighborhood -- which currently is estimated to be 3,000-to-4,000 vehicles a day -- have caused growing safety concerns for residents and students of Lammersville Elementary School who say their quality of life has been severely impacted.

“We're to a point that this has been going on for six, seven-plus years, and there needs to be closure on this. And the only way to do that closure is to bring this to this board, and this board to make a decision on what we can do to the roadways in that area. It is beyond one supervisor’s authority,” said Rickman. “We have to do everything in our power that we can to help this community.”

Rickman also acknowledged that a similar issue was going on at the east end of rural Tracy in the Banta community, where residents have experienced many traffic issues, including multiple accidents, entrapment in their driveways and cars and trucks running stop signs and lights near the Banta Elementary school area. Traffic concerns are growing in Banta with the upcoming opening of a new Amazon facility expected to cover over 1-million-square-feet.

Rickman, along with members of different City of Tracy and County agencies, met with the Banta Community on Oct. 18 at Banta Elementary School to discuss the ongoing issue and look for immediate solutions while the county seeks funding for and negotiates with Union Pacific Railroad on the long-term construction of the $40 million Grant Line Road Realignment Project.

During Tuesday’s Board of Supervisors meeting, Public Works Director Kris Balaji and Deputy Director of Engineering Najee Zarif gave a presentation with background information about the Lammersville traffic issue and three recommended options the county could move forward with.

“I'm glad that Supervisor Rickman brought this item to the board today for discussion, so the staff can get further direction from you on how to continue to help the community going forward,” said Balaji. “I do want to make it very clear though we have complete empathy with the community because I have firsthand witnessed the issues and concerns that they had raised with respect to the semi-vehicles traveling through Hanson Road, which is an illegal activity by the truckers, and it is unacceptable. We are wholeheartedly with them on this issue.”

Balaji detailed what current traffic calming measures have been put in place to help alleviate the issue. This includes various types of permanent and changeable signage; enforcement of violations via CHP; synchronization with GPS applications Waze and Google Maps to recognize newly constructed roadways that truckers can use; and the installation of physical deterrents at certain intersections to discourage trucks from turning onto the restricted roadways. Prologis has also dispatched security guards on Hanson Road at the north end of the Cordes Ranch area to restrict trucks from traveling northbound into the community.

“I must admit, though these measures have significantly reduced the semi-truck traffic on Hansen and Von Sosten Roads, some truck traffic still remains,” said Balaji. “So we have other solutions we could have implemented but those were the temporary solutions that we attempted, and obviously they did not work.”

Public works presented three concepts for the county to work with:

Option 1, which was and is still favored by the Lammersville community, is to do a full closure of Hansen Road by placing barriers on one or both sides of the overpass and installing turnarounds at the closure points. This would require a traffic study to be conducted and for the board to conclude that the road is no longer needed for vehicular traffic. This would take nine-to-12 months to implement, with further study needed to determine how much of an impact it would have on surrounding communities.

Option 2 is a soft closure, where temporary barricades would be placed to reduce access to a single opening and designate the road as “local traffic only” during certain times. The board would have to designate which events the closures would be most appropriate for. This would take two-to-three months to implement and would have a moderate impact on surrounding communities.

Option 3 would designate Hansen Road as northbound one-way traffic only, with barriers, signs striping, etc. installed as needed to prevent southbound traffic from going through. This would take two-to-three months to implement and would have a low impact on surrounding communities.

Public Works said that Option 3, designating Hansen Road as a one-way street, would be the most viable for an immediate solution and recommended the board move forward with that option.

Several residents from the area in question showed up at the board meeting to give input from their point-of-view and to express their frustrations, and several others who could not make it also wrote in to have their comments read into the record. Residents said they circulated a petition where over 90% of 300 families in that area signed in favor of a full road closure.

Most parties collectively agreed that a one-way designation of Hansen Road would not solve the problem and may in fact make the problem worse if no enforcement is available.

“We talked earlier about the one-way (road). What County Public Works is suggesting is it will cut down traffic by almost half. I asked you this: If a shark that is very dangerous, you remove half of its teeth, is that shark still capable of taking your hand off? I think we'd all probably agree that is the case,” said Tom Heckman, chairman of the Lammersville Preservation Alliance. “So the point is that reducing it by half doesn't resolve the problem. The only solution is to close Hanson road with emergency access.”

The biggest caveat at that moment for a full road closure was the needed traffic study that would cost about $14,000. County Counsel J. Mark Myles determined that legally, because the road closure would only benefit a small number of residents in the greater area, that the burden of costs would fall on the residents requesting the closure. However, residents argued that they shouldn’t have to pay for a solution to a problem they were forced into.

“There is only one solution, and the one-way that they're proposing is not going to work. The community is going to continue to get louder and louder until this issue is taken care of. We didn't make the mess. We should not have to pay to have it fixed,” said Heckman.

Residents from the northern agricultural area of Hansen Road also expressed concerns of access to and from their areas if any road closures ensue, since the overpass is their primary route for their vendors and distributors.

CHP and the South San Joaquin Fire Authority also weighed in with their thoughts on the closures, saying that emergency response would be moderately impacted and possibly double response times.

Recognizing that this was a serious, multi-faceted problem, the board voted on a series of proposed actions to be taken immediately:

• Move forward with the traffic study and request reimbursement from ProLogis.

• Implement the one-way designation of Hansen Road for the interim.

• Direct Public Works to continue to work with the community and other stakeholders for more solutions to mitigate traffic and enforce consequences for violations in the area.

Public Works will bring an update to the board within the next 90 days.