You are the owner of this article.
Edit Article Add New Article
You have permission to edit this article.
Edit
Welcome, Guest
Celebrate Tracy
News
Voice
Our Town
Sports
Datebook
Obituaries
Advertising
Classifieds
Special Sections
1 of 16 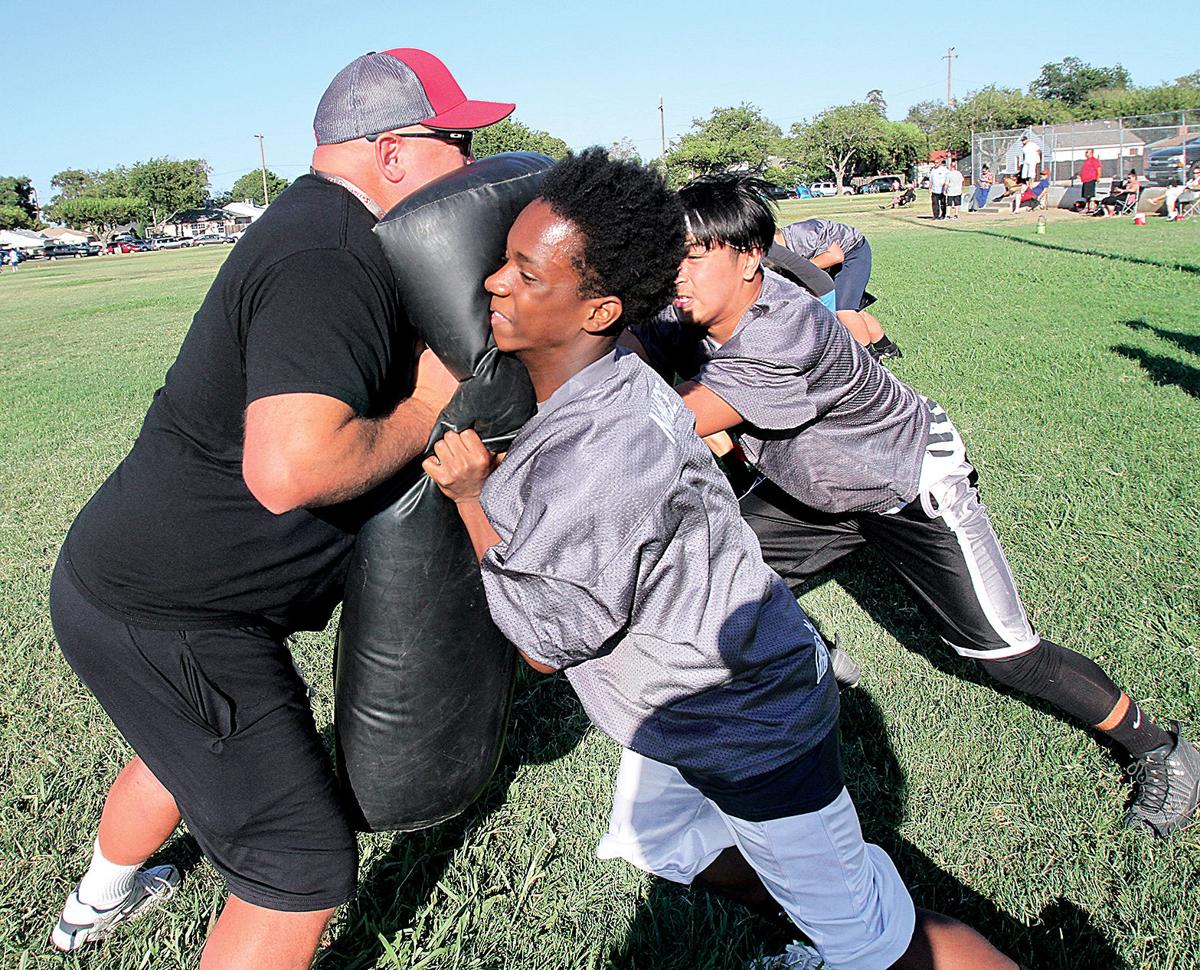 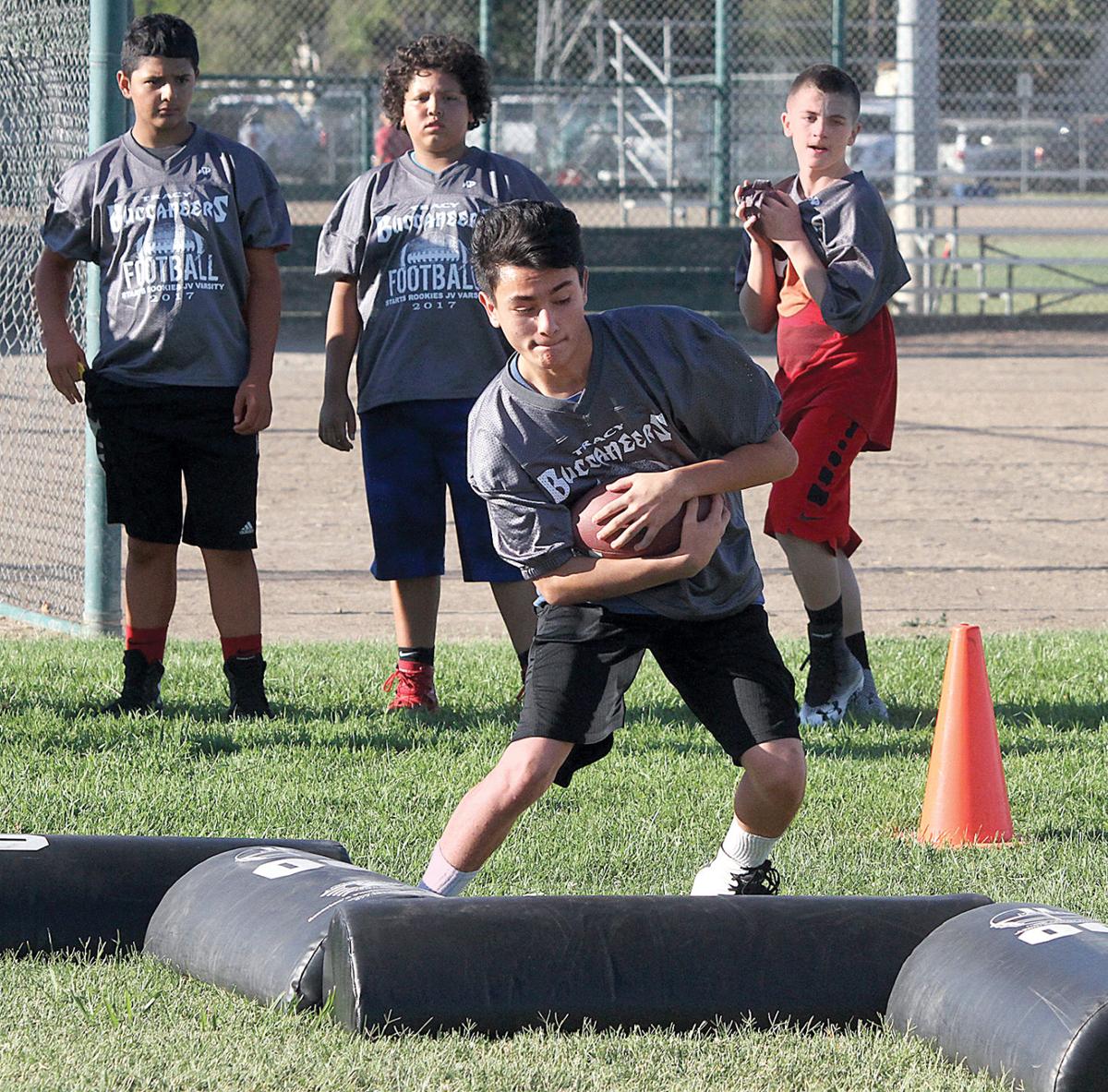 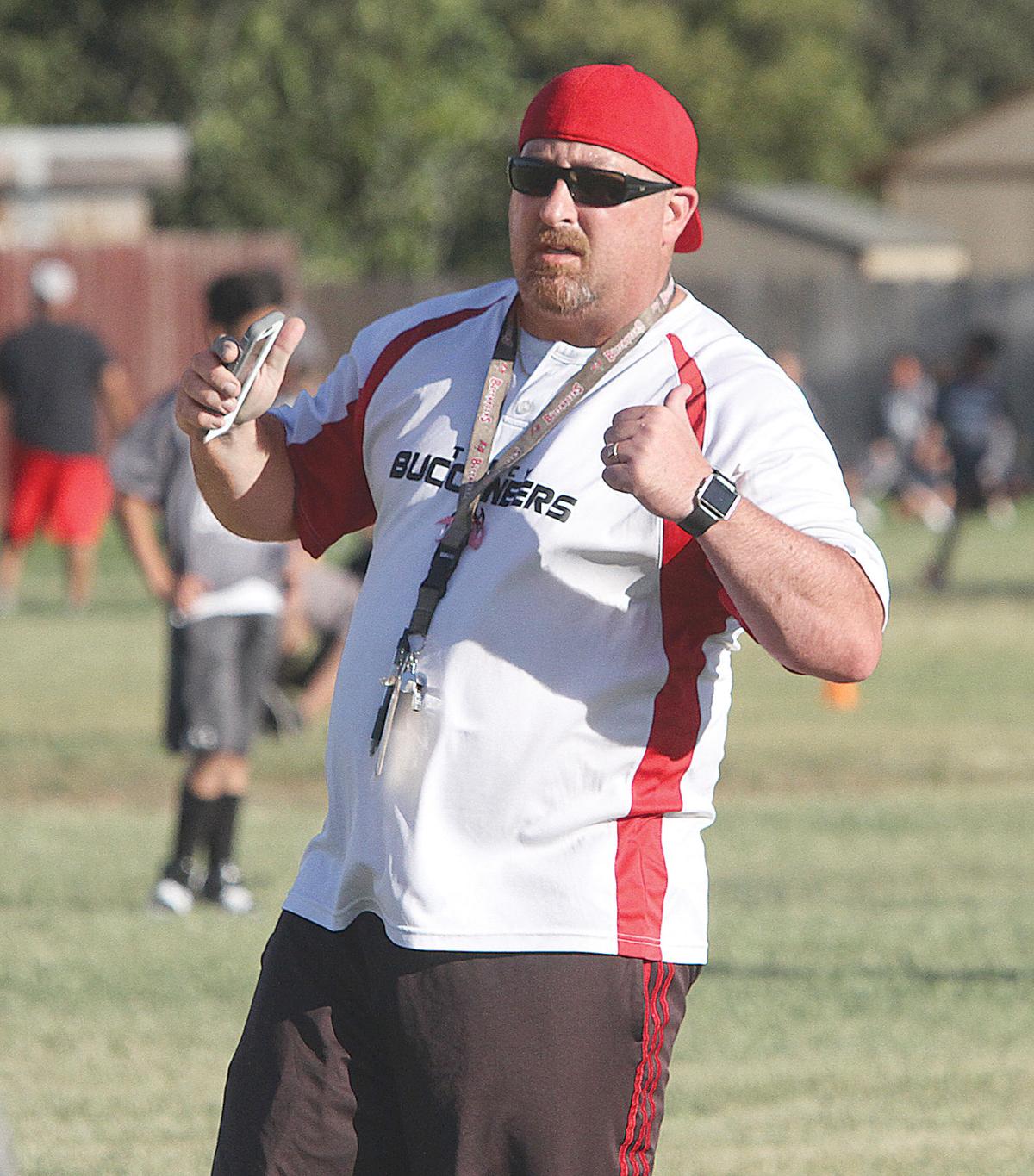 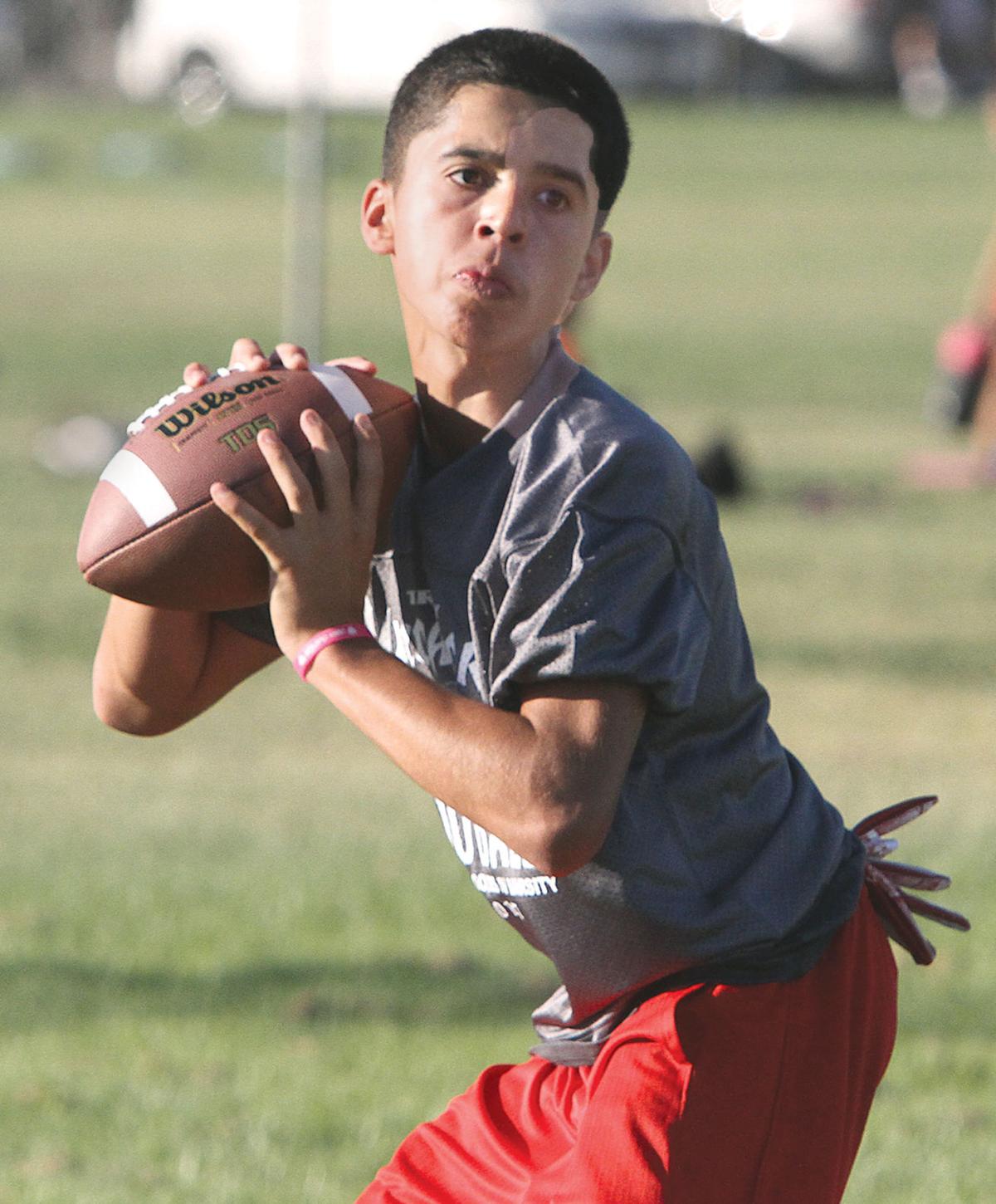 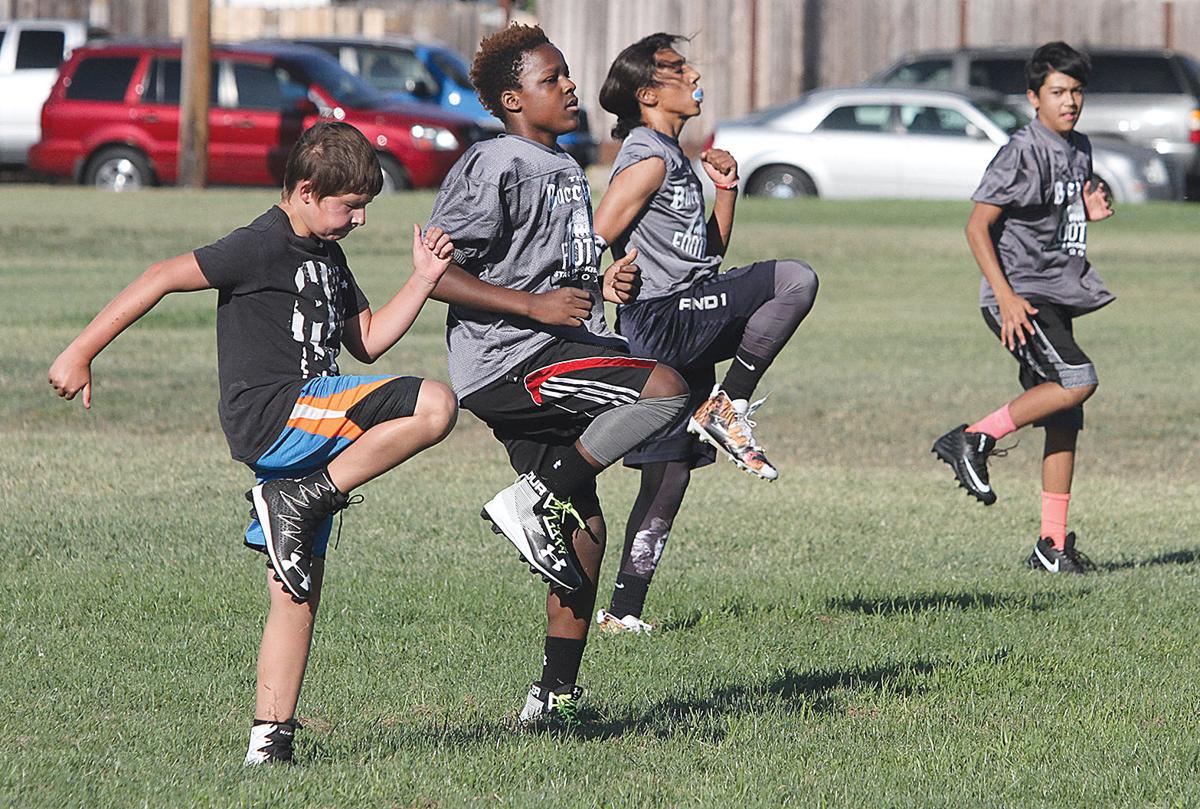 Players on the Tracy Buccaneers varsity team limber up before practice Tuesday at Tracy Ball Park. 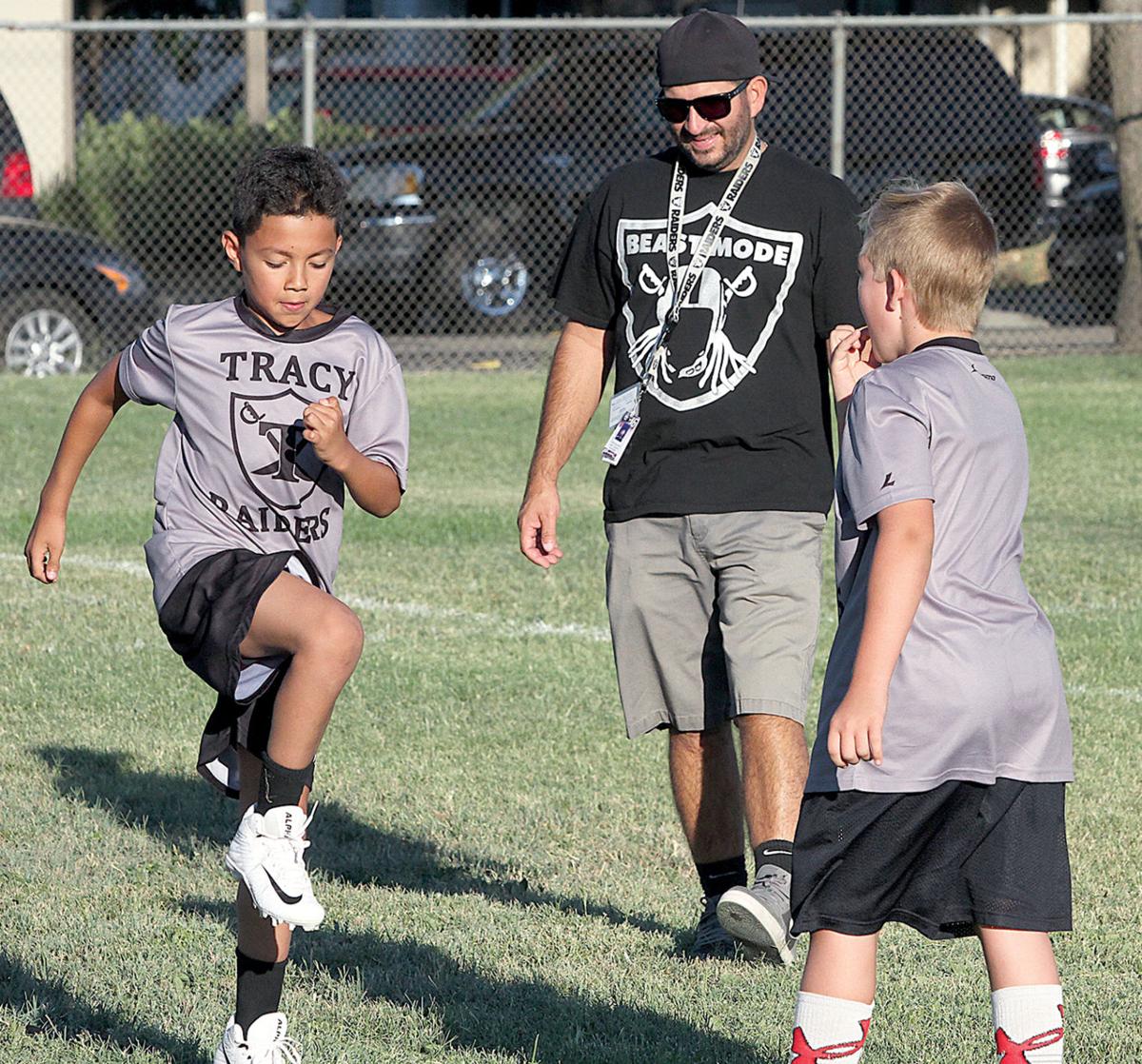 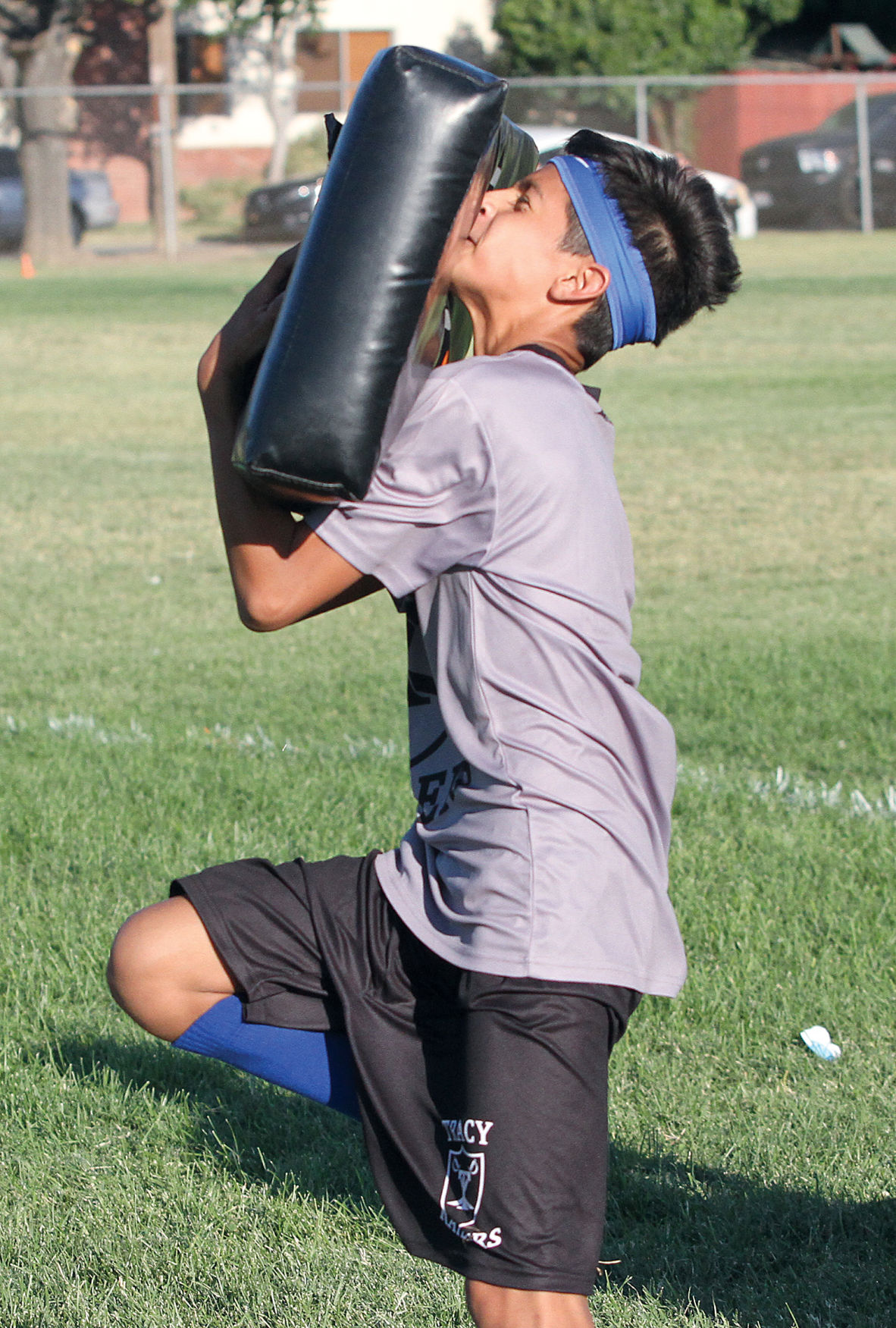 Andres Gamboa hits a pad during a drill with the Tracy Raiders novice youth football team practice on Tuesday at Tracy Ball Park. 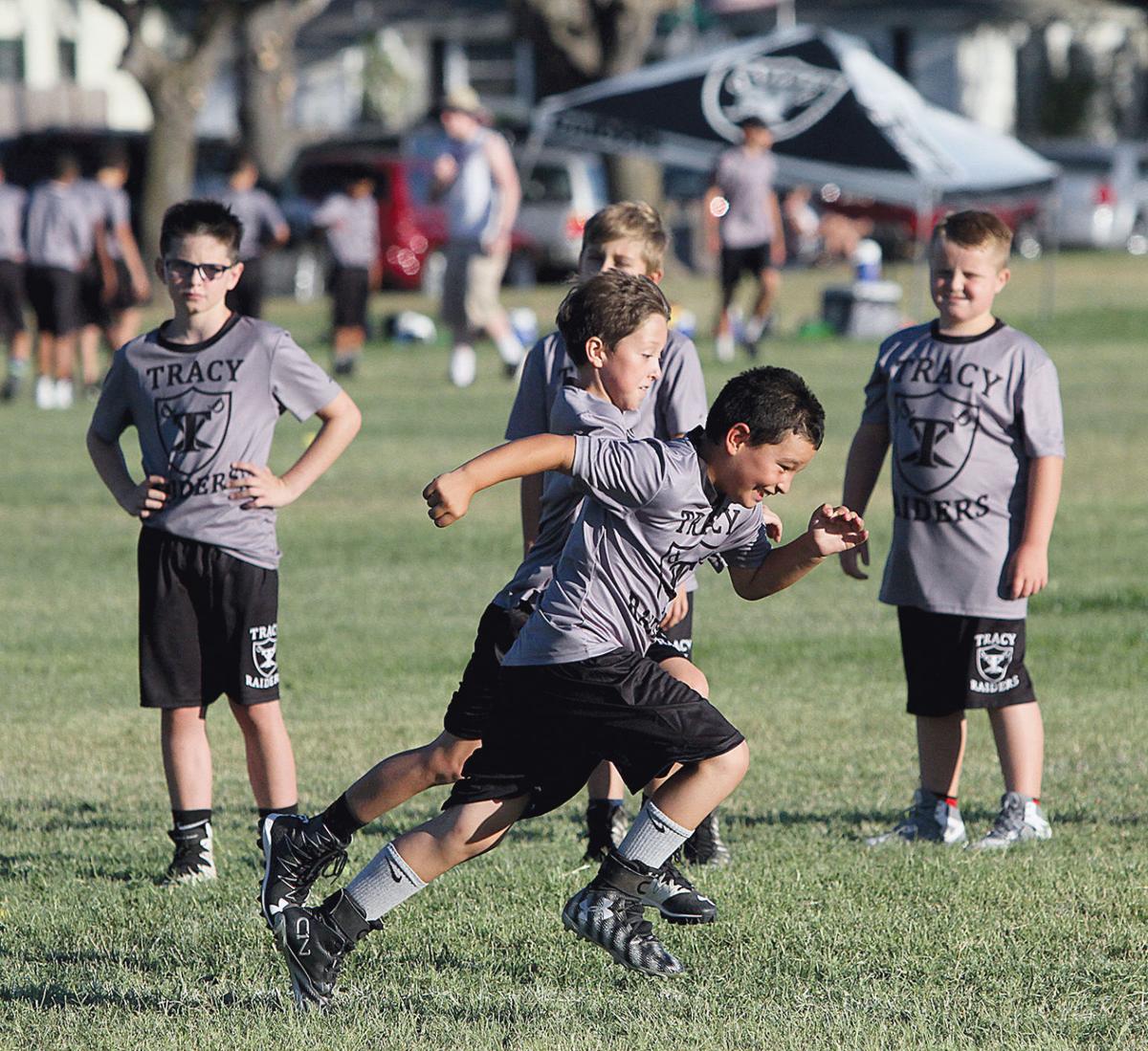 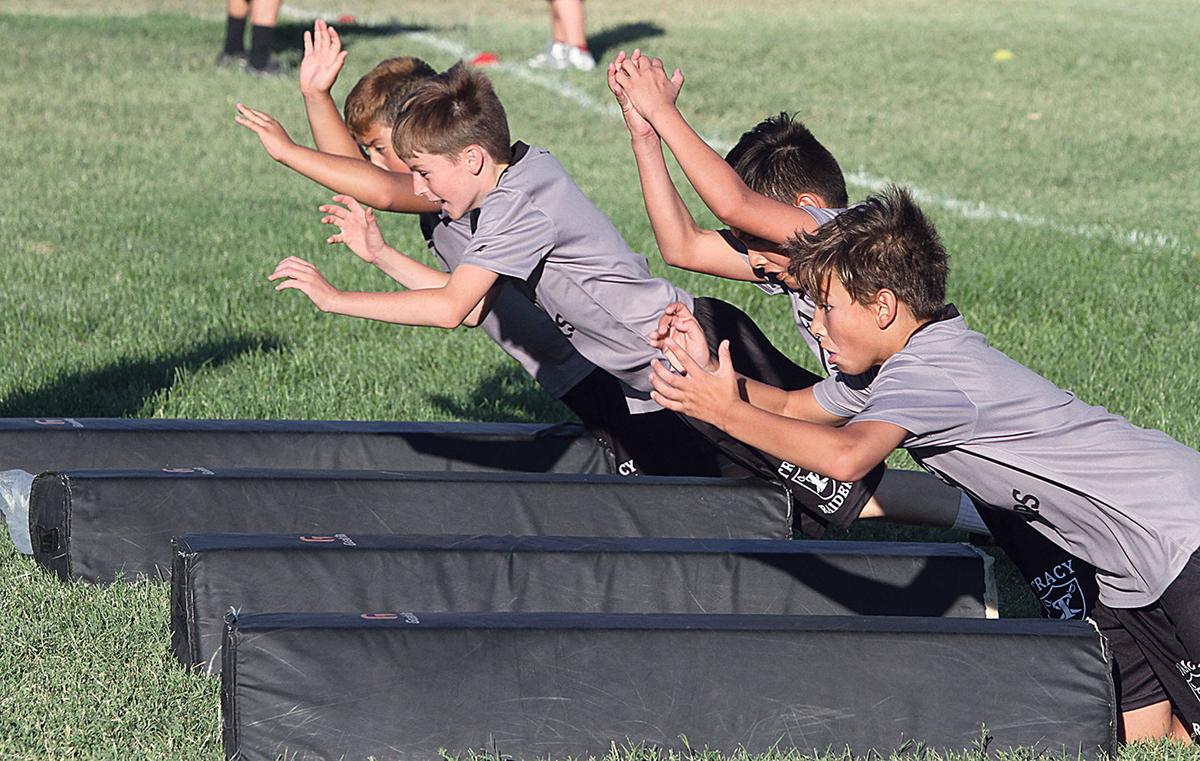 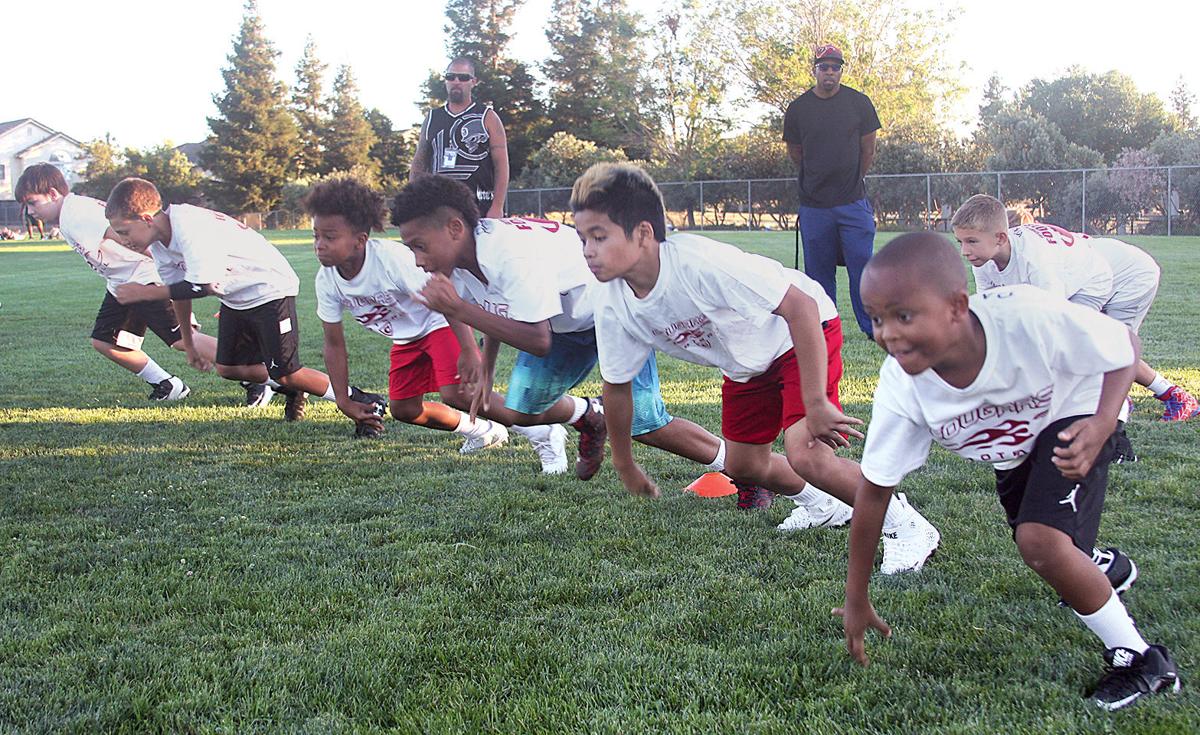 The Tracy Cougars novice team charges off the line in a sprint drill during Tuesday’s practice at Hirsch Elementary School. 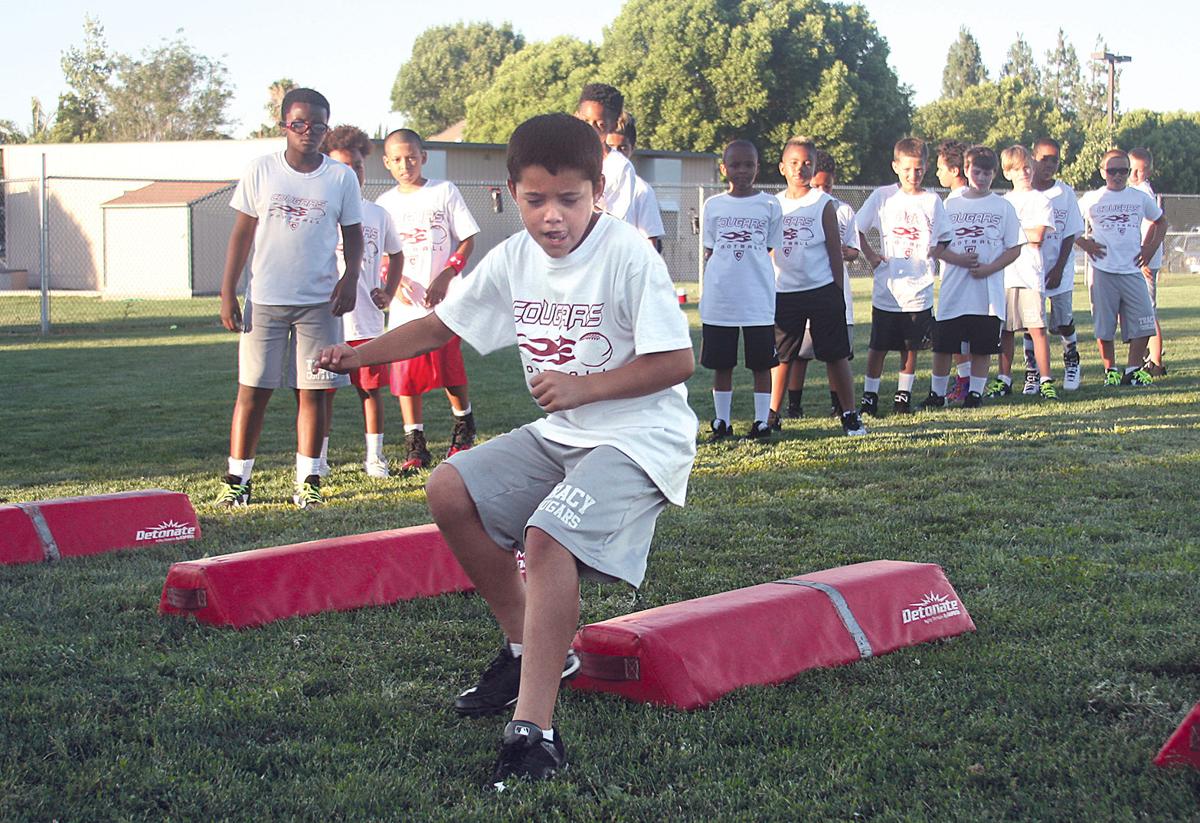 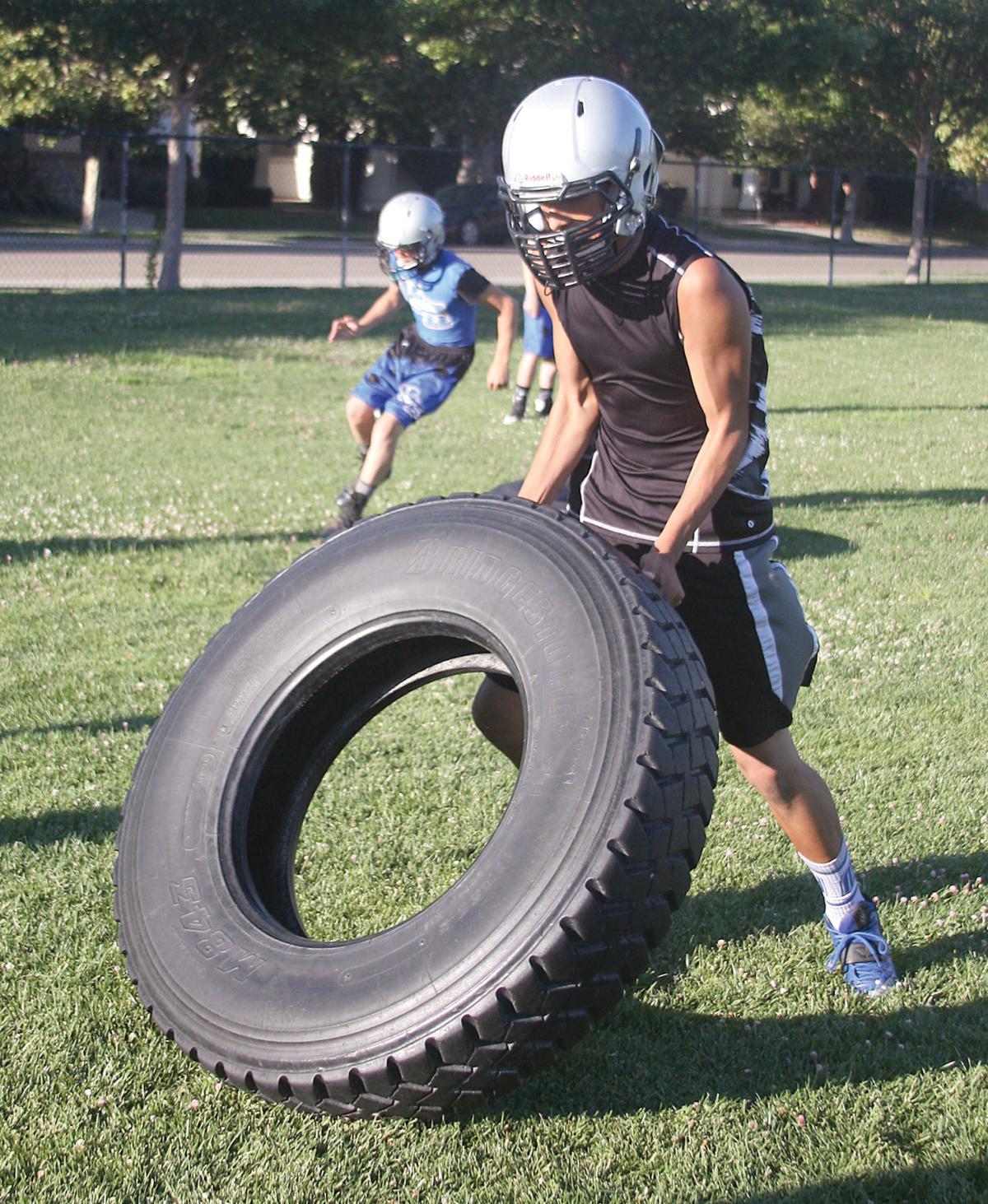 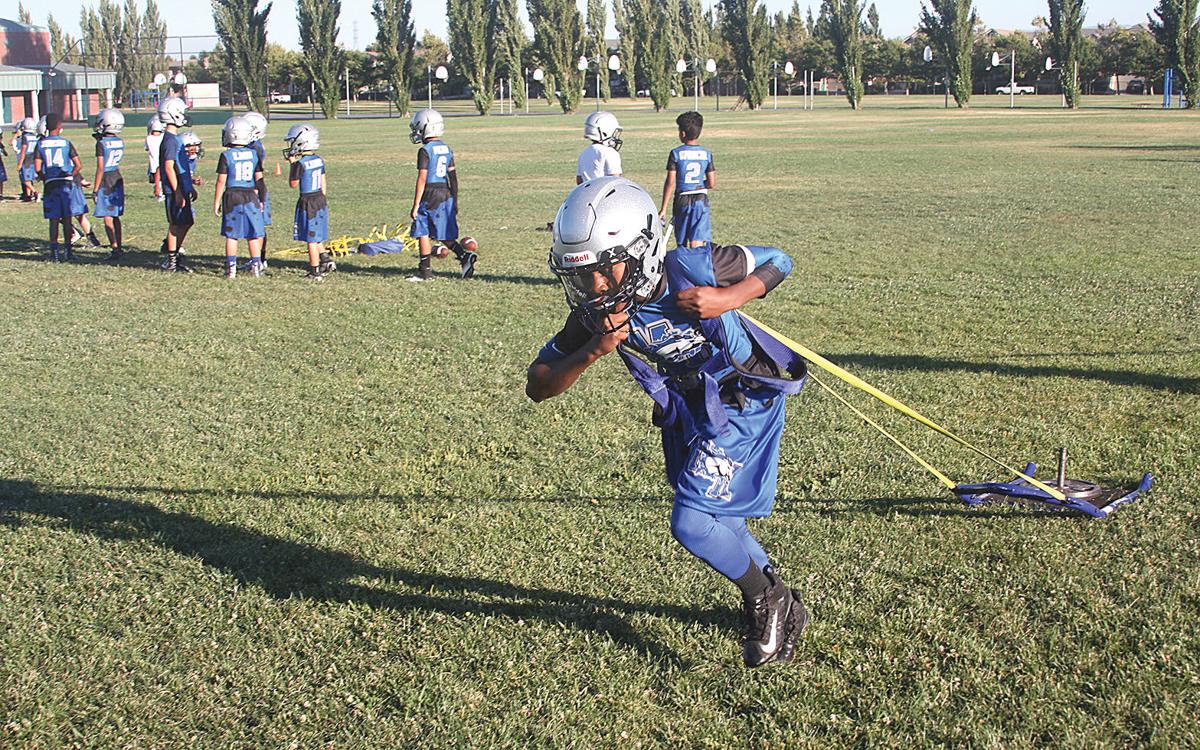 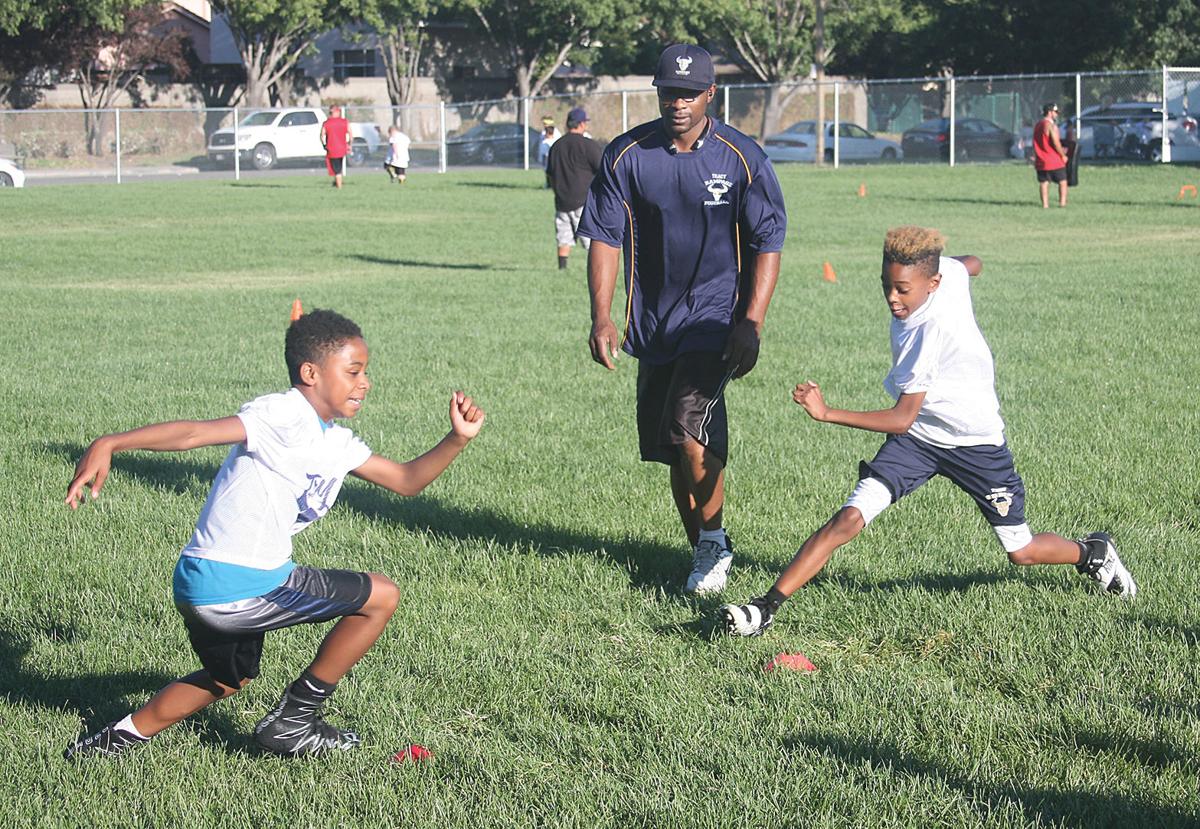 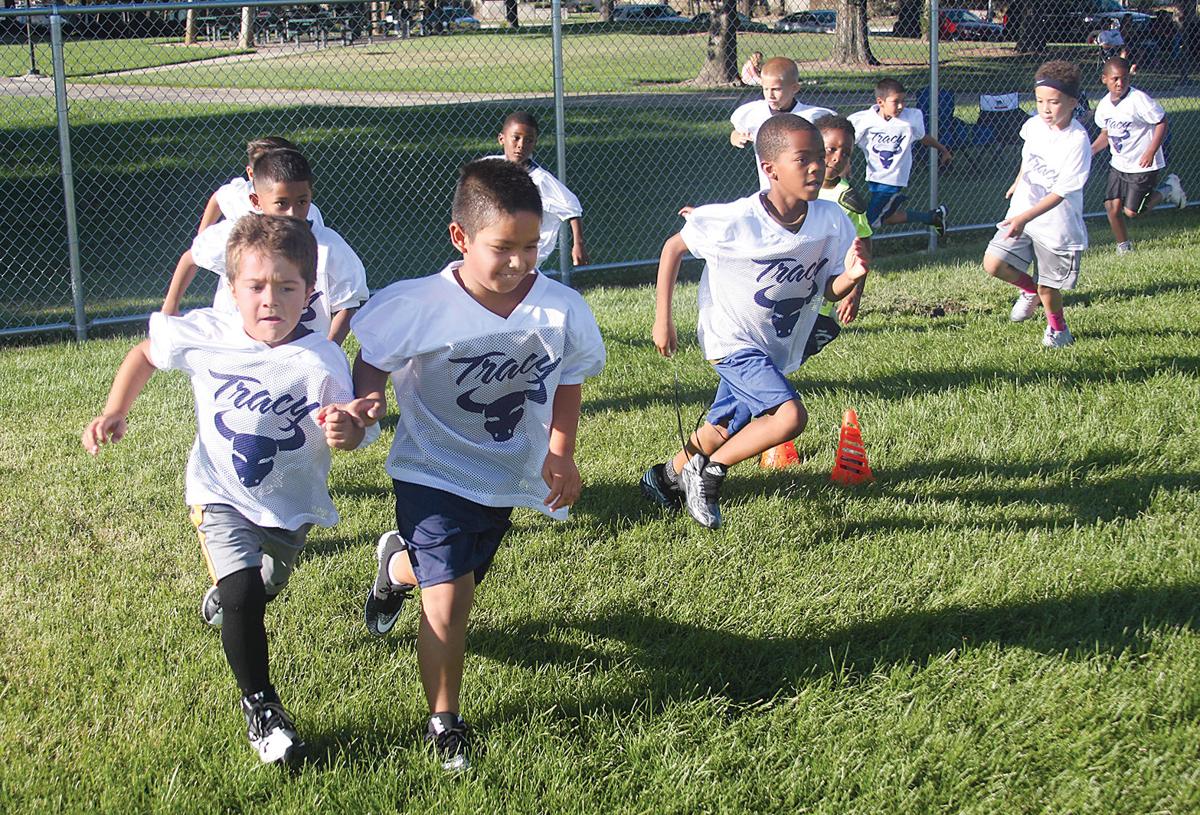 The Tracy Rampage junior novice team takes off on a lap around the field at Poet-Christian School after completing a drill Wednesday.

Players on the Tracy Buccaneers varsity team limber up before practice Tuesday at Tracy Ball Park.

Andres Gamboa hits a pad during a drill with the Tracy Raiders novice youth football team practice on Tuesday at Tracy Ball Park.

The Tracy Cougars novice team charges off the line in a sprint drill during Tuesday’s practice at Hirsch Elementary School.

The Tracy Rampage junior novice team takes off on a lap around the field at Poet-Christian School after completing a drill Wednesday.

The youth football season began this week, with about 600 players across five local organizations starting conditioning and practice.

The Raiders are back for their 45th season in town, and the club president, Terri Goularte, hopes to see teams at all four levels contend for championship titles in the Delta Youth Football League.

It’s the third year since the team reclaimed the Tracy Raiders name after four years as the Junior Bulldogs, and Goularte said the organization has regained its momentum in terms of attracting enough players to field competitive teams at all levels.

“We’re pretty much at our highest now in the three years since I’ve taken over,” Goularte said, adding that 120 players have signed up, plus 40 cheerleaders.

The Raiders advanced to the playoffs at all four levels last year. The junior novice and novice teams went all the way to the DYFL Super Bowl, though neither claimed a league title.

Goularte added that the varsity team, including mostly seventh- and eighth-graders, is looking strong as ever this year.

“Varsity is usually hard to fill, but we have a team at every level,” she said, adding that the roster listed 18 players as of Monday, the first day of practice. “We have a few coming to sign up still, so if we make it over 20, I’ll be so happy.”

The Raiders begin their season Aug. 26 at Tracy High against the Weston Ranch Cougars.

The big change for the Tracy Cougars this year is leadership. Haywood Johnson takes over as the team president after John Harvey served eight years as president.

Johnson said he’s fully prepared to take the organization into its 15th year in Tracy.

“I’ve been vice president for the past five years. I have a passion for coaching. I want to give back,” Johnson said, adding that his son, Haywood Jr., is on the junior novice team. “So I want to be here for him as he grows in football.”

In the first week of practice, Johnson said the team’s short-term goal is to build up its numbers. It has 20 players each on the junior novice, novice and junior varsity teams and 15 on the varsity team.

“We’ve definitely got room for a lot more,” he said, adding that it’s still early in the practice and conditioning phase of the season.

The Cougars found success last year with a novice team — mostly 9- and 10-year-olds — that went to the DYFL South championships, where the team lost to the Tracy Raiders.

The coach is now eager to see what the other DYFL football clubs look like this year.

“We haven’t had jamborees yet, so I don’t know what other teams have to offer,” he said, adding that only opponent he knows about for sure is the Raiders. “That crosstown rivalry, the last game of the season, is always a big one. The rest of the league, we’ll fare well.”

The Cougars open their season the weekend of Aug. 26-27 against the Delta Patriots of Brentwood. Johnson said it will be a home game, but the day and location haven’t been confirmed.

President James Brakkee is optimistic about the upcoming season — the 14th year for the Buccaneers. The program could be at full capacity before the first games begin.

“We’re full on varsity, which is real nice, and we’re full on starts,” Brakkee said, referring to the oldest and youngest players. “Our two middle teams (rookies and junior varsity) are at 35, and 40 is our max.”

The Buccs also have a popular cheer program with about 50 participants.

The Buccaneers had the only local league championship team in 2016 as the junior varsity squad, mostly 11- and 12-year-olds, went undefeated, capping their season with a 38-20 win over the Concord Cobras in the Nor Cal Youth Football and Cheer Super Bowl.

Buccaneers athletic director Erin Dunniway said that most of his coaching staff is back, and about 14 players from last year’s junior varsity team are now playing for the Buccs varsity squad.

“I’ve had a core of kids since they were starts, and every year we use the same playbook and all we do is elaborate each step as we go up,” Dunniway said, adding that the varsity team’s 13- and 14-year olds now understand plays and strategies as well as their coaches.

“They come out of the huddles after practices or after a play and they’ll say, ‘Coach, this is what we see.’”

The season begins Aug. 19 with the Buccaneers hosting the Stockton Rams. The venue for that game has not been determined yet.

The Tracy Rampage is back for its fifth year, and new starts coach Alex Alvarado sees the potential for the players on his team to dominate the Nor Cal Youth Football and Cheer league.

“Hopefully we get them back to the playoffs and the Super Bowl. It would be the Rampage’s first Super Bowl,” Alvarado said.

All of the Rampage’s four levels made the playoffs last year, and the starts and rookies went to the second round. Those two levels, for the youngest players, teach kids the fundamentals of the game.

“They pick it up fast,” Alvarado said, adding that along with the new players, experienced players give the team a solid core. “I’ve got a couple stars that were here last year.”

President Cookie Ortega and her husband, Fred Ortega, the team’s athletic director, started the Rampage five years ago. She said that about 110 kids have joined the four football teams and 36 have signed up as cheerleaders. While some rosters are thin, she expects all of the teams will be competitive.

“All of our teams are full, but we didn’t go to 40,” she said, referring to the maximum allowed by the league. “We usually never go over 30, 32. They all have a chance to play, and basically you’re only as strong as your weakest link, and the kids that don’t know how to play, we hope that they excel by the end of the season.”

The Rampage opens the season Aug. 19 at East Union High in Manteca against the Manteca Timberwolves.

Local rivalries will become more intense this football season. The Mountain House Junior Mustangs, now in their sixth year, are now in the Nor Cal Youth Football and Cheer league with the Tracy Buccaneers and Tracy Rampage.

CEO Mo Kaho’onei said that the Junior Mustangs — known as the Hurricanes for their first three seasons — got accustomed to tough competition as part of the San Jose Police Activities League.

“We did three years there, and last year was a really good year,” he said, noting that the varsity team advanced to the semifinals of the championship tournament, and the junior pee wee — the 9- and 10-year-olds — made it to the San Jose PAL Super Bowl. They finished with a 13-12 loss to the Hayward Lancers.

Kaho’onei said that the league change was driven by families who wanted to keep games local. Home games will be played at Mountain House High School. The first game of the season on Aug. 19 is on the road at Edison High in Stockton against the Edison Junior Vikings.

The Junior Mustangs have about 20 kids each on three of the four teams and 16 on the varisty team.

“We have room for more kids. We’d like to get to 30 at every level,” he said, adding that the varsity level is the hardest to fill.

“We started with four and were kind of scared at first if we were going to have a varsity, but they all came together and started talking to their friends and recruiting their friends,” he said.

The Junior Mustangs also have 30 cheerleaders, including a junior pee wee squad that won the JAMZ national title in February.