You are the owner of this article.
Edit Article Add New Article
You have permission to edit this article.
Edit
Welcome, Guest
Celebrate Tracy
News
Voice
Our Town
Sports
Datebook
Obituaries
Advertising
Classifieds
Special Sections
1 of 5 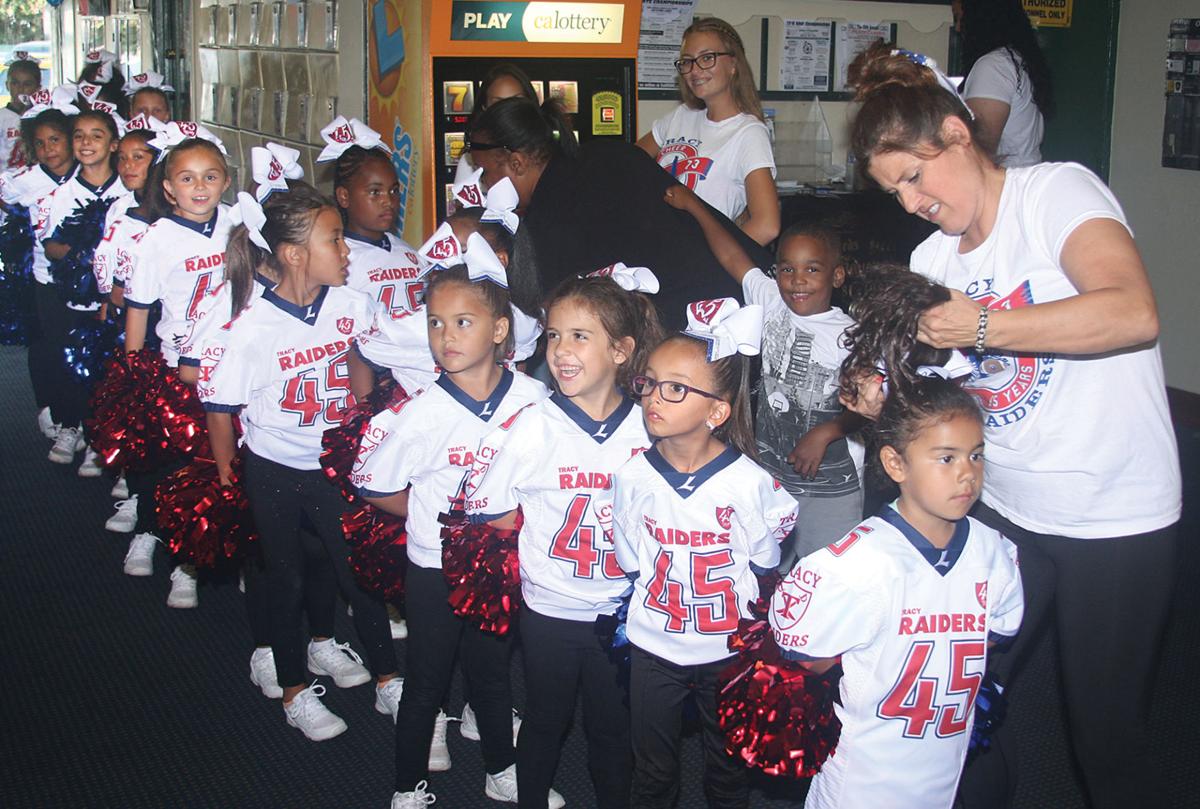 Michelle Farmer prepares the Tracy Raiders cheerleaders for their entrance into the festivities celebrating the Raiders’ 45th anniversary Monday at West Valley Bowl. 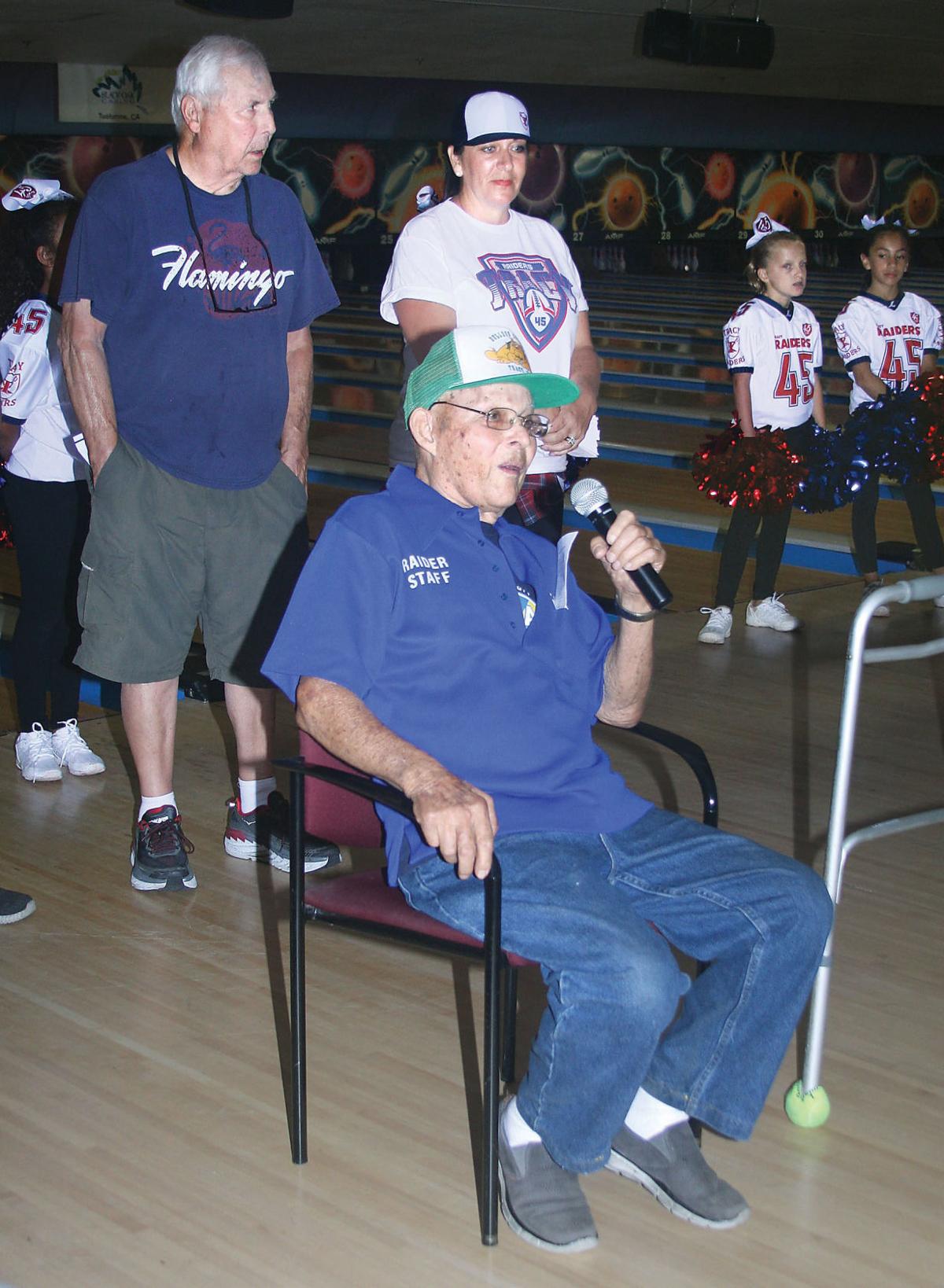 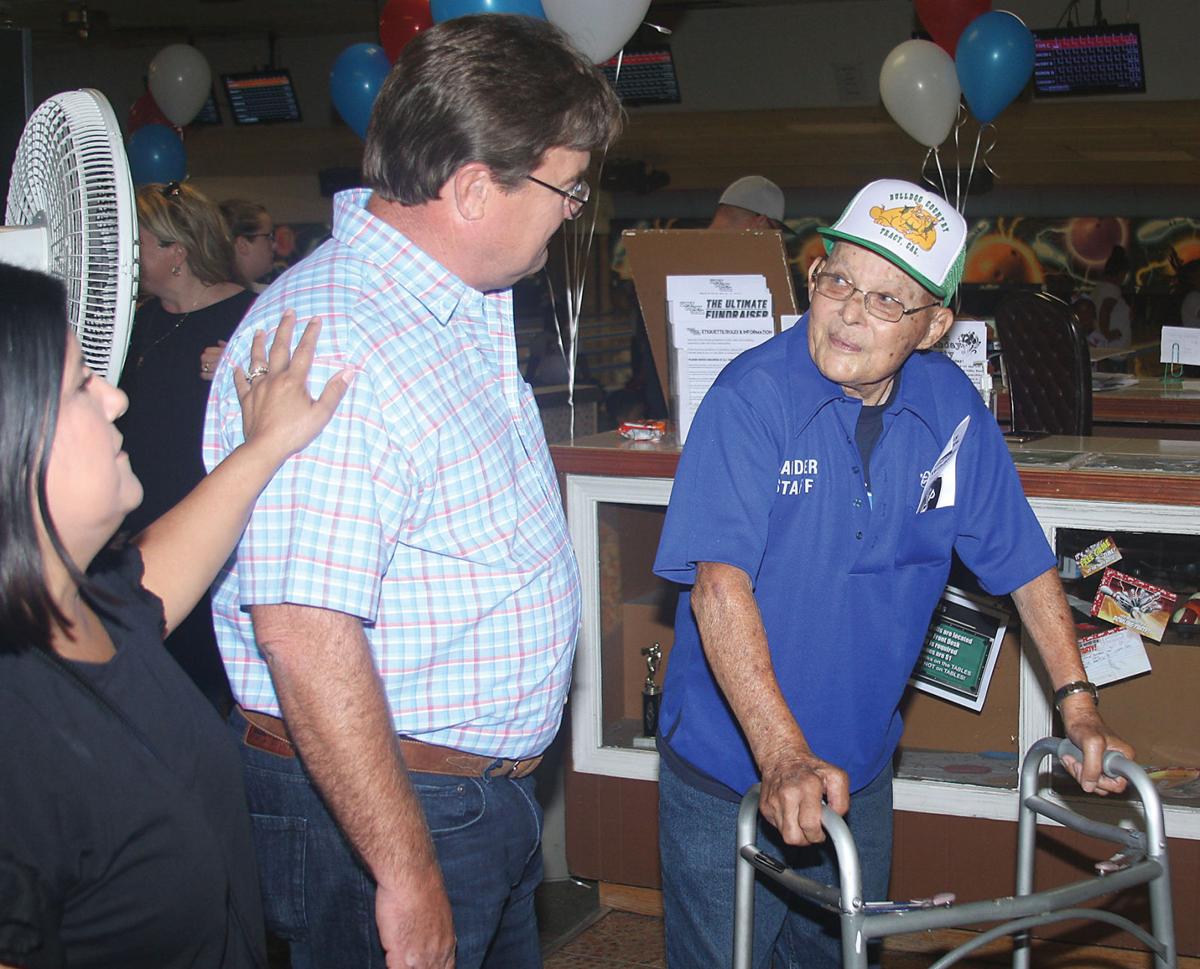 Tracy Raiders founder Ed Caporusso (right) catches up with Ron Yerian, one of the players on the first Tracy Raiders team, during Monday’s 45th-anniversary celebration at West Valley Bowl. 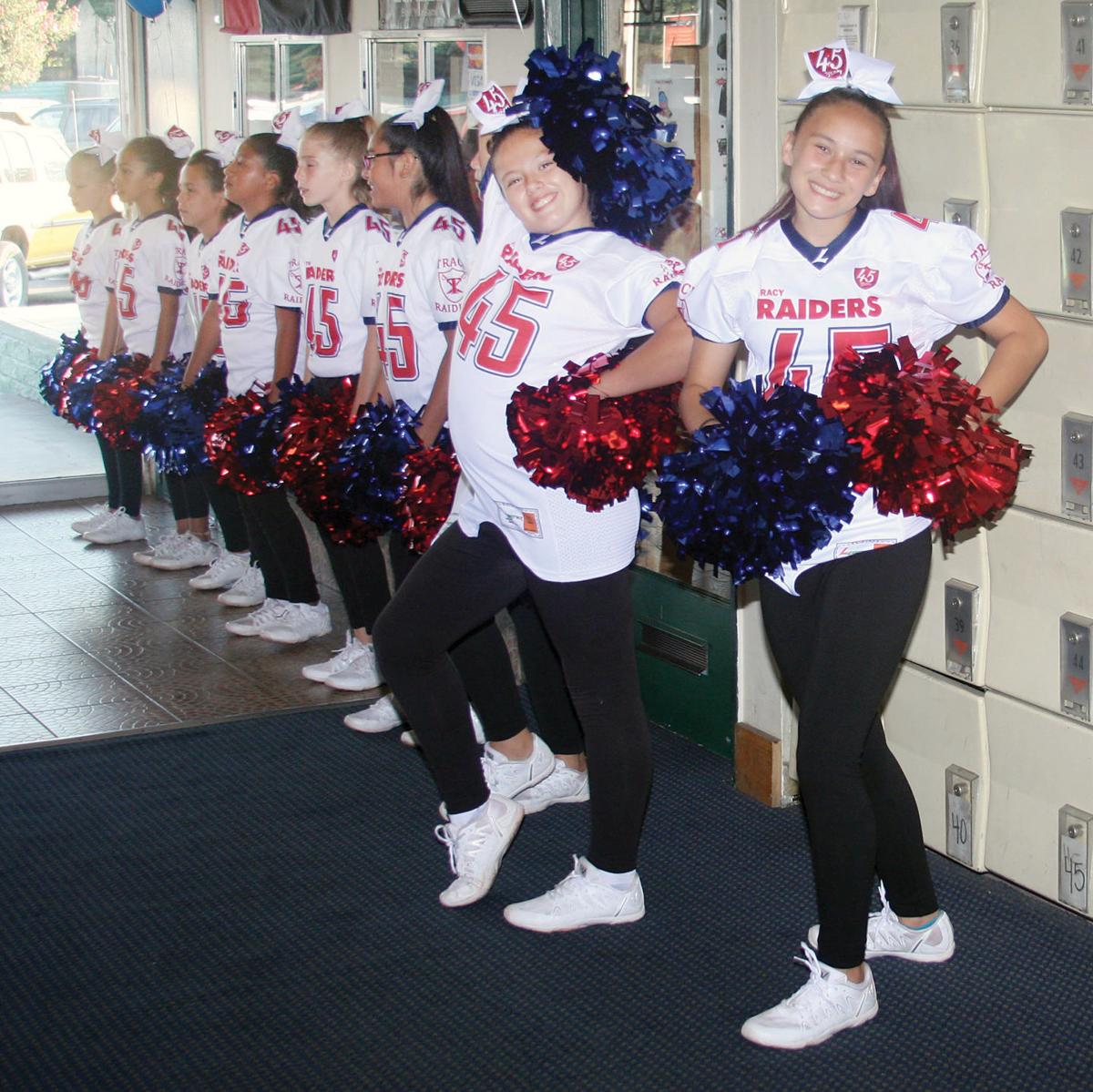 The Tracy Raiders cheerleaders greeted people arriving at West Valley Bowl on Monday at the start of the Raiders’ 45th-anniversary celebration. 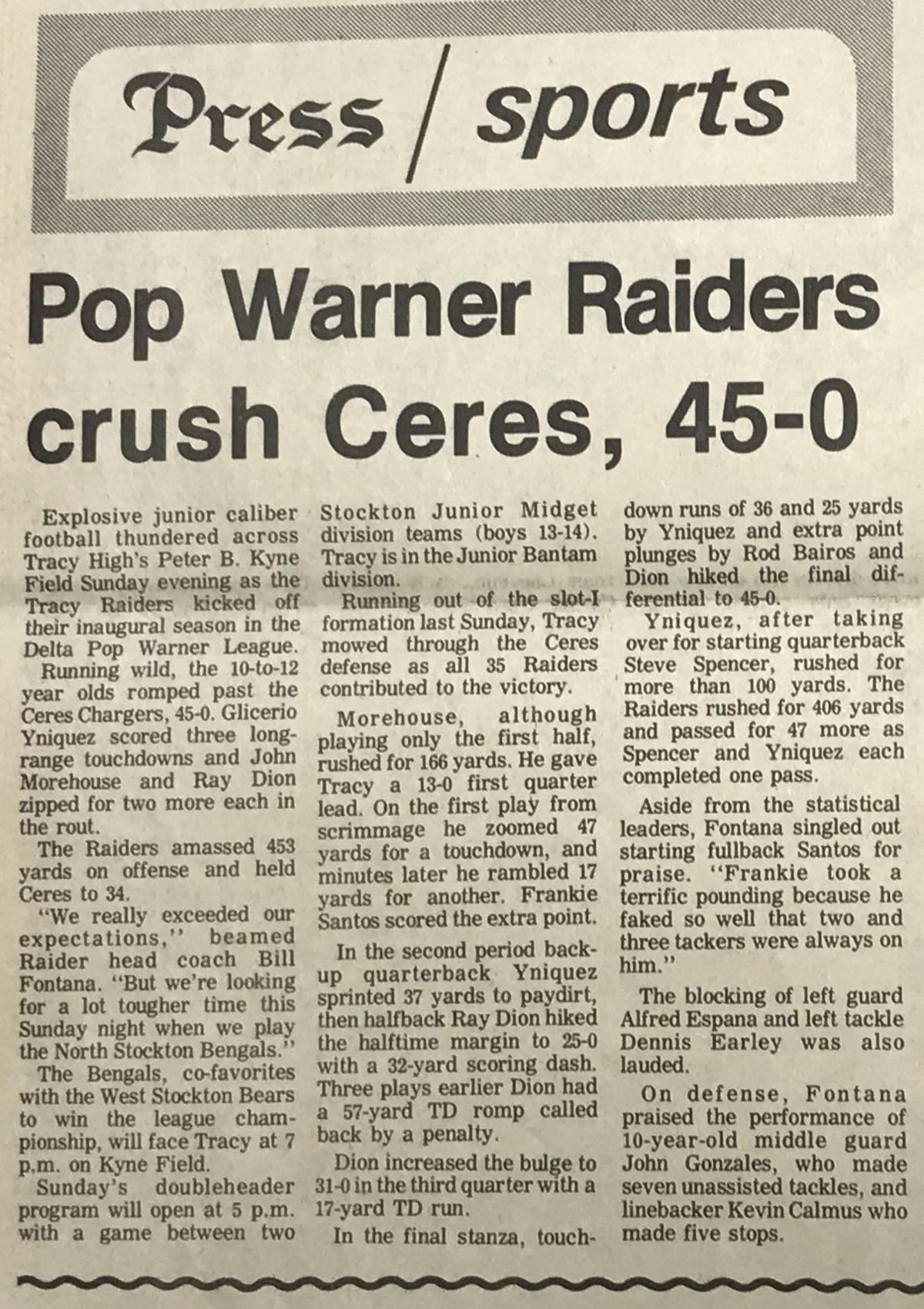 Michelle Farmer prepares the Tracy Raiders cheerleaders for their entrance into the festivities celebrating the Raiders’ 45th anniversary Monday at West Valley Bowl.

Tracy Raiders founder Ed Caporusso (right) catches up with Ron Yerian, one of the players on the first Tracy Raiders team, during Monday’s 45th-anniversary celebration at West Valley Bowl.

The Tracy Raiders cheerleaders greeted people arriving at West Valley Bowl on Monday at the start of the Raiders’ 45th-anniversary celebration.

It’s been 45 years since youth football made its debut in Tracy, and on Monday the founders of that first Tracy Raiders football team gathered for a 45th anniversary celebration at West Valley Bowl.

It was an evening of pizza and bowling for players and cheerleaders, but first they heard from the program’s founders and the coaches and players from that first Tracy Raiders team.

Tracy Raiders founder Ed Caporusso told the crowd that the biggest challenge at first for the board of directors was raising money for the fledgling program.

“We started, our board — we struggled . We didn’t have a penny,” he said, recalling that the team initially bought jerseys from the Stockton Bengals at $100 for the full set. “They were red, and we went to pass them out — they were full of holes, so went to California Athletic Supply and they had one set of uniforms left, and that was the original colors, the blue and white and red. If they had been pink and yellow, that would have been our colors.”

Caporusso added that getting fundraising experts involved was just as important as getting football experts on the board.

“We really struggled to get money, but when we got women on the board, that turned the tide, and since then they’ve run everything,” he said.

Bill Fontana, the coach for the 1973 Tracy Raiders age 10-12 team, recalled that the Tracy community was ready for Pop Warner football and he saw plenty of support for the inaugural team.

“This town was so great, so enthusiastic. That’s why we’ve got multiple clubs now. That’s why we’ve got all these people involved,” Fontana told the crowd. “I’ll tell you this. The biggest thing is, for me personally is, as long as the kids come first, as long as the kids always come first, winning or losing or whatever you do …, you guys will have a great successful program.”

Players from the inaugural team at Monday’s event included Ron Yerian. He said that he and other kids at the time were also ready for Pop Warner football.

“Back in those days most of us played flag football — Central School, North School, South School, West Park, six or eight schools,” Yerian said. “We played fourth, fifth and sixth grade and it was over. The Tracy Raiders picked up from there, so a lot of us already knew each other.

“It was an awesome experience. We still have a lot of those friends we made back then. We still know each other today, 45 years later.”

Steve Viado, who started as a Raiders coach in 1975 and stayed with the program for 25 years, said that the Raiders-Bulldogs connection, including the relationship with Tracy High football coach Wayne Schneider, was always strong.

“I ran basically the same plays that Wayne did,” Viado said. “When my kids moved up to the high school level, they knew how to understand the plays, and I’d call them the same way Wayne did. They even read the hand signals that he did.”

Viado noted that the Raiders’ successes in the mid-1970s included two victories at national tournaments in Las Vegas. Those trophies were on display Monday along with other mementos from the past 45 years.

“If you won that tournament, you could be considered national champions,” Viado said. “We went there three years and took first place twice and third place once.” 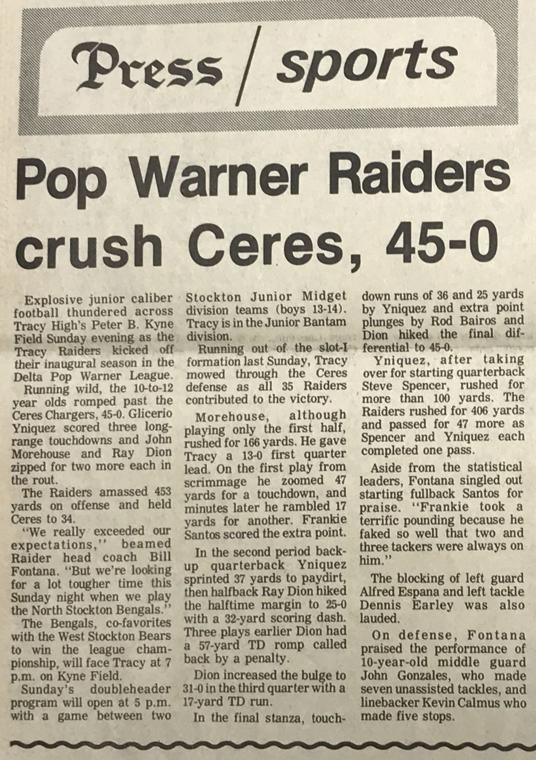