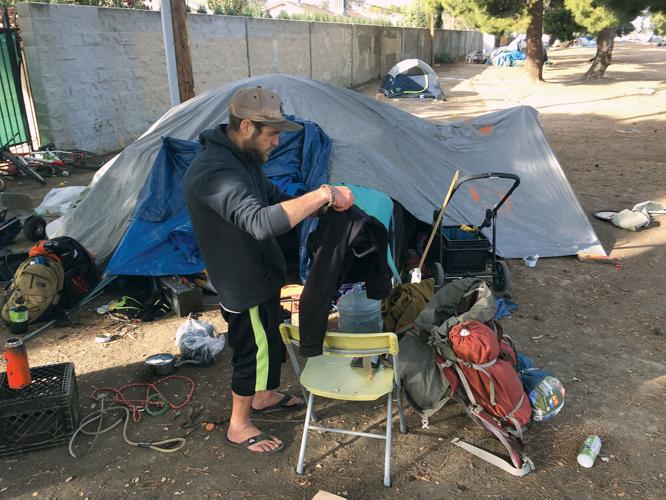 Jesse Aaron Woods fills his backpack at El Pescadero Park in preparation for the move to the city’s new homeless shelter. 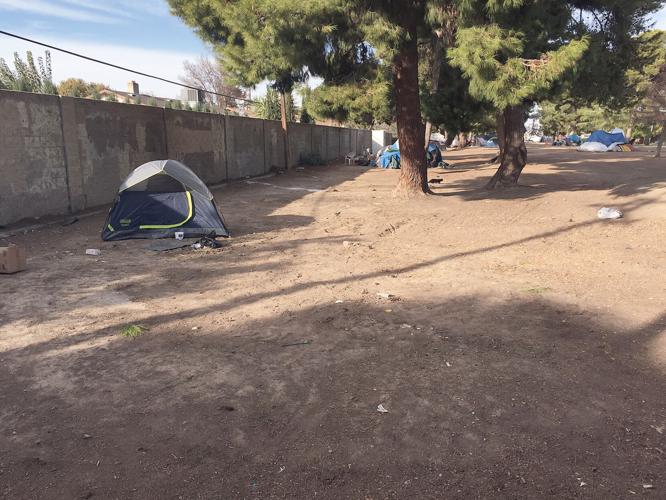 Much of the ground formerly occupied by tents has been cleared at El Pescadero Park. 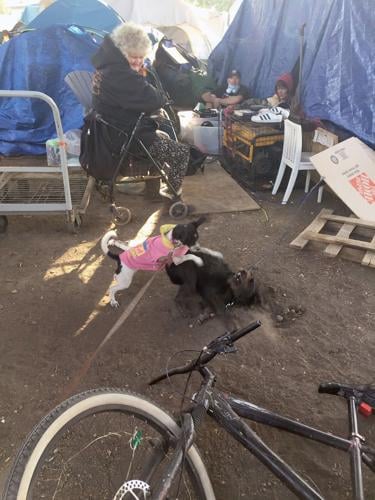 Dogs play at the encampment at El Pescadero Park and people staying at the park consider their next move now that a city homeless shelter has opened.

Jesse Aaron Woods fills his backpack at El Pescadero Park in preparation for the move to the city’s new homeless shelter.

Much of the ground formerly occupied by tents has been cleared at El Pescadero Park.

Dogs play at the encampment at El Pescadero Park and people staying at the park consider their next move now that a city homeless shelter has opened.

A little more than a week after the city of Tracy’s new homeless shelter opened on Arbor Avenue the shelter has brought in more than three-dozen people, and the tents at the city’s largest encampment are starting to be removed.

Tracy Homeless Services Manager Virginia Carney was busy directing the activity at the shelter on Tuesday. The four modular buildings, with a fifth building for a community room and offices, hold 48 beds, and Carney confirmed that 37 of those beds are now occupied. There is still some shuffling among the new residents still to occur before all are full, and in the meantime workers are pouring the concrete pads for repurposed shipping containers that will hold another 39 beds.

At El Pescadero Park at the north end of Parker Avenue the tent city that had become the city’s largest encampment is starting to thin out. Though dozens of tents are still in place, newly cleared and leveled ground shows that many tents have been removed.

One woman, who said she’s unsure if the new shelter will take her because she has two dogs, said about 15 to 20 tents in close proximity to her tent have been removed in the past week.

At a nearby tent Jesse Aaron Woods, who has been staying at the park for about a year, said he’s already made contact with the city and expects to have a place in the new shelter.

“It sounds like a good deal. It sounds like they’re giving you a foundation, which is needed,” he said. “I just wanted to try it out and see it with my own eyes.”

Woods said his experience at El Pescadero Park hasn’t been as bad as in other places he has stayed as an unsheltered person. He noted, for example, that Tracy Police and Code Enforcement talk to people before coming in to clean up debris.

“They’re treating this as a social services problem instead of a criminal problem,” he said. “In Modesto they don’t even warn you. They just start tearing stuff down,” he said, adding that he appreciates the efforts underway in Tracy. “I think it’s very good, what they’re doing, from what I’ve seen with my own eyes and my own experience.”

He now looks forward to getting his life back on track and possibly helping others in the same situation.

“Before I was homeless I worked in mental health for 10 years, so I kind of understand some of these people.”

Also taking advantage of the new shelter is Esther, who did not give her last name, who had been at the park for the past 2 years. She returned to the park to visit friends and is glad to tell them about her experience at the shelter.

“They don’t bother us and I can take my dog with me. I’m very happy,” she said.

“It’s a lot better than I thought and a lot better than people think. People say all this stuff that’s not true. We’re not prisoners there. It’s not a FEMA camp. None of that. You can come and go. They have a dorm for women, a dorm for men and they have couples there.”

Another woman said that her past experience with government promises cause her to not trust the city, and added that when trying to advocate for the unsheltered she has been met with hostility or at best, indifference. At the park she sees people subjected to violence with no police or security intervention.

She said that she too will be moving of the park now that she has found housing with a roommate.